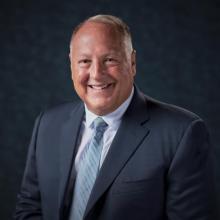 In his civilian career, Tony is a nationally recognized fundraising executive, having raised over $200 million for nonprofit organizations during his 34-year career. He is a strategic planner with the ability to build and foster meaningful relationships, assemble and lead teams to grow organizations, and increase revenue. Tony is exceptionally talented at conceptualizing and achieving goals by creating a framework that addresses the needs of the organization and solutions to achieve success.

Tony began his professional fundraising career in 1988 as a capital campaign consultant with Ketchum, Inc. Since that time, he has served seven nonprofit organizations, including being hired by Sonny Bono as the first Director of Development for the Palm Springs International Film Festival, now in its 32nd year. He has served as Director of Advancement for UMS-Wright Preparatory School, Major Gift Officer for Indiana University, Senior Major Gift Officer at the University of South Florida, Director of Development at Tampa Preparatory School, Vice President of Development for Vision 360, and Chief Development Officer for Admiral Farragut Academy. Prior to entering the fundraising profession, Tony served as a legislative assistant on Capitol Hill and a field representative for the Indiana Lieutenant Governor.

Tony earned a BA in Political Science from Indiana University and his MPA from the University of South Alabama. He brings to the Institute for the Study of War expertise in capital and annual campaign planning and management, long-range and strategic planning, major donor cultivation and solicitation, proposal and grant writing, planned giving, event management, and digital fundraising. Tony is passionate about his faith, family, history, young people, the military, and foreign policy. He has served on the boards of the Fellowship of Christian Athletes, Pizzas 4 Patriots, and Cornerstone Family Ministries. On Saturdays in the fall, you will find Tony on a football field as he is an NCAA College Football Official with the Old Dominion Athletic Conference and USA South Athletic Conference. He resides in the Tampa Bay area with his wife, Tonya, and two daughters.