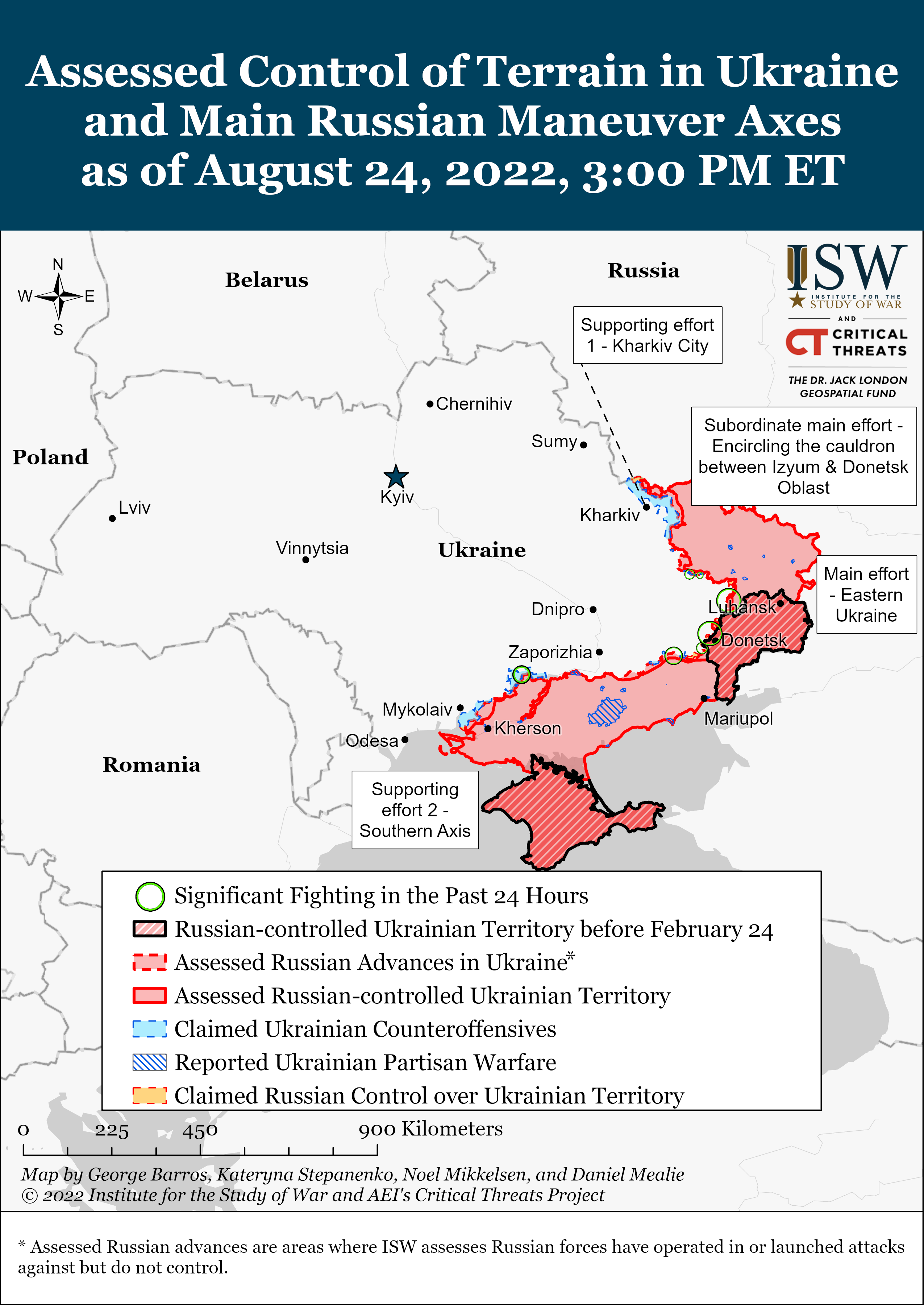 Russian forces did not conduct any confirmed ground attacks towards Siversk and continued air and artillery strikes on Siversk and surrounding settlements on August 24.[7]

Russian forces conducted ground attacks in order to advance from the western outskirts of Donetsk City on August 24. The Ukrainian General Staff stated that Russian troops attempted offensive operations in the direction of Pisky, Nevelske, and Pobieda- which form a line along the western outskirts of Donetsk City.[12] Russian sources reported that Russian and Donetsk People’s Republic (DNR) troops are continuing to push westward of positions near Pisky towards Nevelske, Pervomaiske, and Optyne and are conducting artillery strikes to support ground attacks towards Avdiivka.[13] 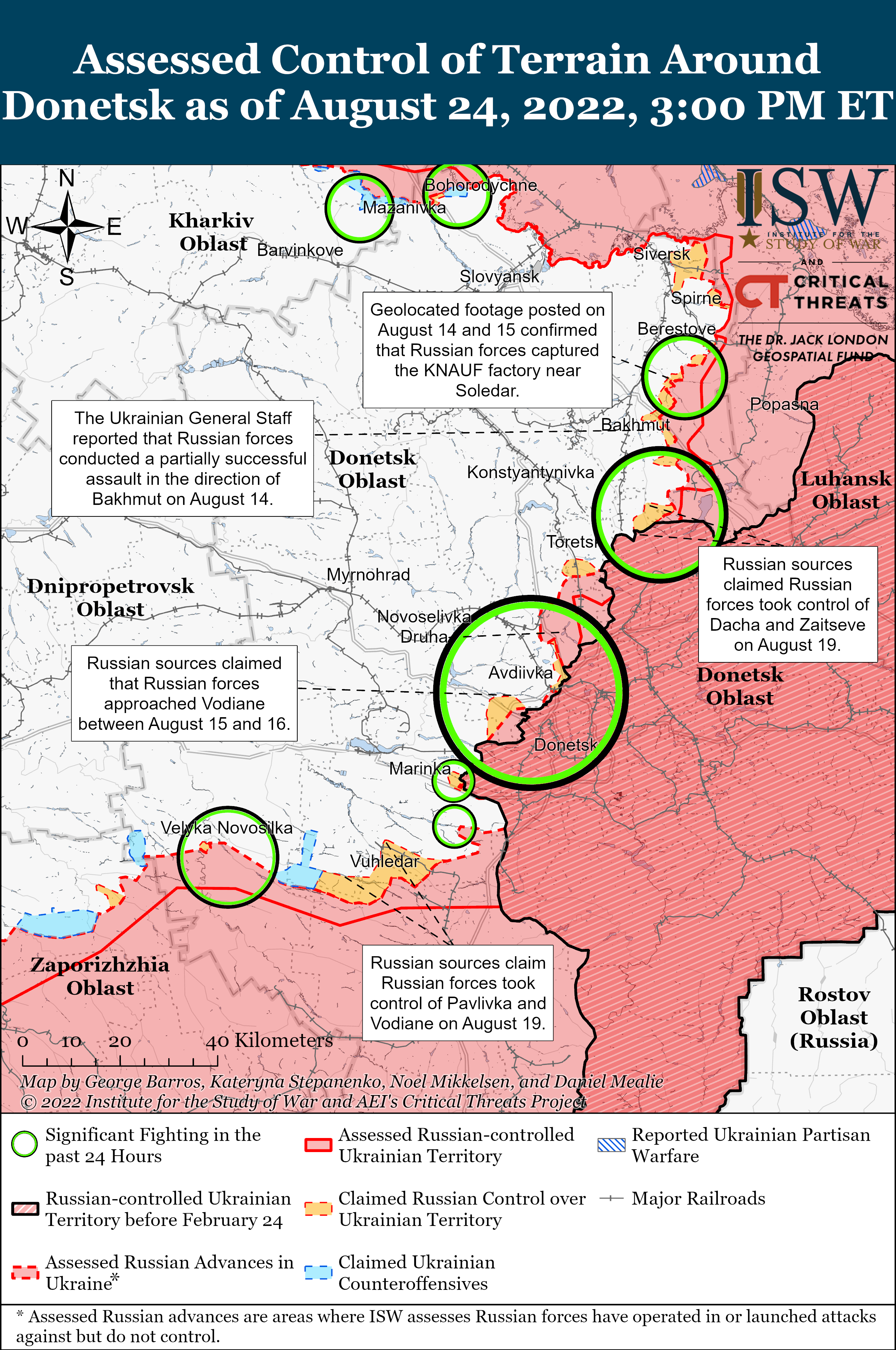 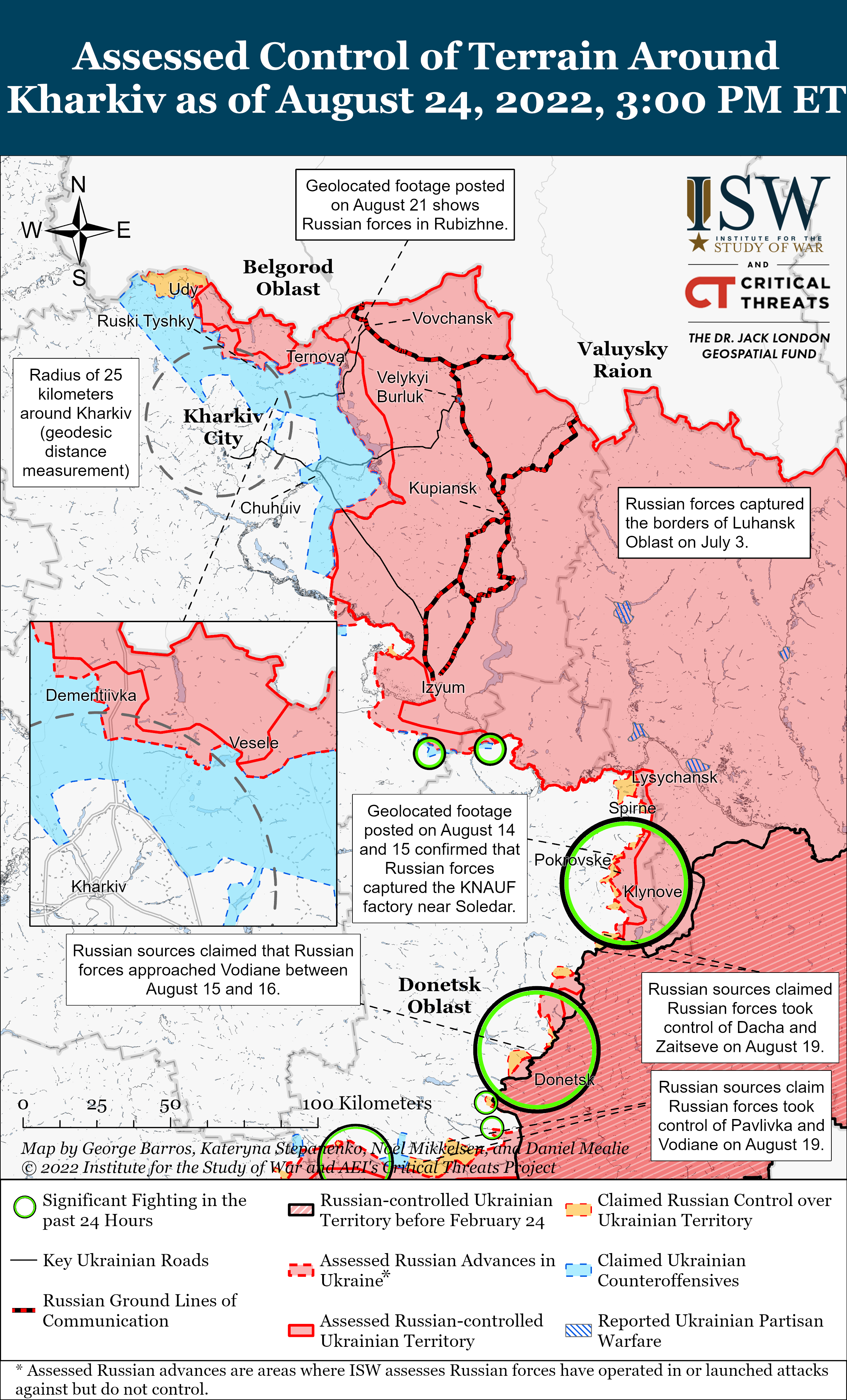 Russian forces conducted a limited ground assault in northwestern Kherson Oblast on August 24 but did not make confirmed territorial gains. The Ukrainian General Staff reported that Ukrainian forces repelled a Russian assault in the direction of Mykolaivka south of the Kherson-Dnipropetrovsk Oblast administrative border.[19] Russian forces continued to launch airstrikes near the Ukrainian bridgehead over the Inhulets River, northwest of Kherson City, and near the Kherson-Dnipropetrovsk Oblast administrative border.[20] 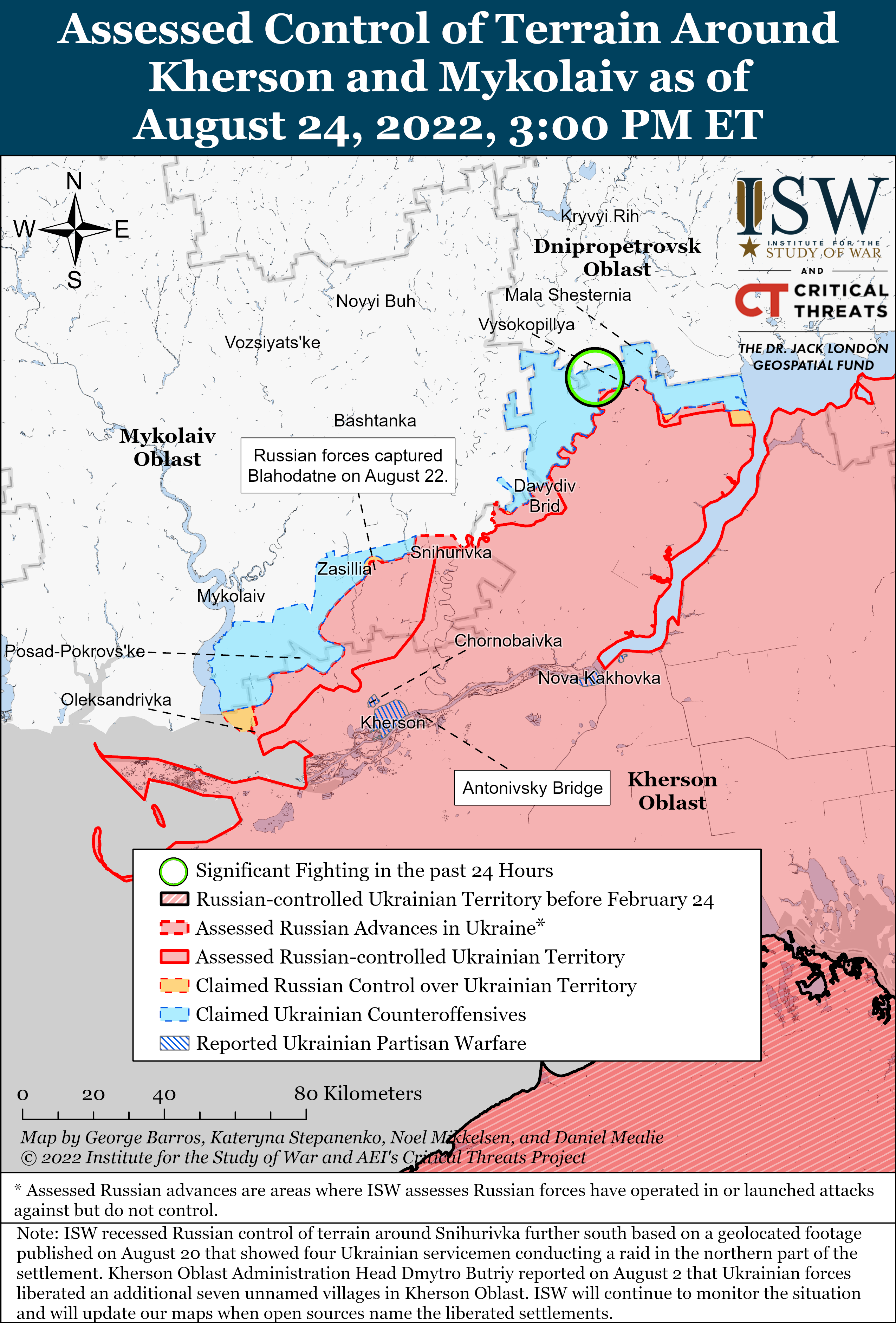 Russian federal subjects (regions) continued to form new volunteer units to reinforce Russia’s war in Ukraine. Altai Krai announced the formation of five volunteer units: the “Kalashnikov” and “Altai” battalions, the “Skurlatova” and “Katun” companies, and the “Biya” platoon. Local outlets did not specify if Altai Krai will be offering one-time enlistment bonuses but noted advertised monthly salary ranging from 30,000 to 300,000 rubles (about $500 to $5,000).[32] The Republic of Tatarstan local outlet Biznes Online stated that Russian authorities’ classification of such volunteer formations as "battalions” exaggerates the actual number of recruits in each volunteer unit.[33] The outlet noted that Perm Krai’s ”Parma” Battalion has 90 people and is structurally more consistent with a motorized rifle company.[34]  The outlet noted that Russia did not previously have territory-based volunteer units as was common in the Donetsk and Luhansk People’s Republics (DNR and LNR) since 2014 and that Russian forces may be modeling these units after DNR and LNR proxy units, such as the ”Vostok” and ”Somali” battalions.

Battalion personnel complements range in size in any military based on the specialization of the battalion, but the Russian volunteer units’ advertised complements are low, and reported fill levels are even lower. Most “battalions” (and even some “regiments”) will more likely have the size of reinforced companies. It is also noteworthy that these ad hoc volunteer battalions are not described as battalion tactical groups (BTGs) and do not appear to be structured like BTGs. It is not clear how they are being employed on the battlefield unless they are being assembled with one another or with the remnants of already deployed BTGs. It is clear that a volunteer “battalion” has nothing like the notional combat power of a battalion tactical group that invaded Ukraine in February, even discounting the inexperience and ages of many volunteers and the very limited training they receive before deploying to combat. Biznes Online also indicated that recruitment into volunteer units decreased throughout the summer and that local Russian officials are intensifying advertising efforts in certain regions. The outlet claimed that the Republic of Tatarstan had only 10-15 interested recruits at the beginning of the recruitment campaign in early June, and such numbers reportedly tripled by the end of the campaign. The outlet’s report confirmed ISW’s assessment that federal subjects began increasing one-time enlistment bonuses to increase recruitment rates in August.[35] The outlet added that Russian federal subjects also began advertising military contracts in public transportation and other recruitment campaigns ”behind the scenes,” but noted that the Kremlin-sponsored sources have not shared such advertisements.

The Kremlin is likely attempting to shield Moscow City residents from the military recruitment campaign, which may lead to some social tensions. Kremlin Spokesperson Dmitry Peskov denied any reports of the formation of the Moscow-based “Sobyaninsky Polk” volunteer regiment on July 13, shortly after Russian opposition outlet Meduza reported that Moscow City military commissariats started recruiting labor migrants and residents of different Russian regions into the regiment.[36] Biznes Online noted that all media discourse regarding the “Sobyaninsky Polk” stopped following Peskov’s denial. The sudden change in reporting may suggest that Moscow City ceased recruitment for the “Sobyaninsky Polk” in an effort to avoid drawing Muscovite criticism of the recruitment campaign. The apparent lack of a Moscow City-based volunteer unit may also spark some criticism from other federal republics. 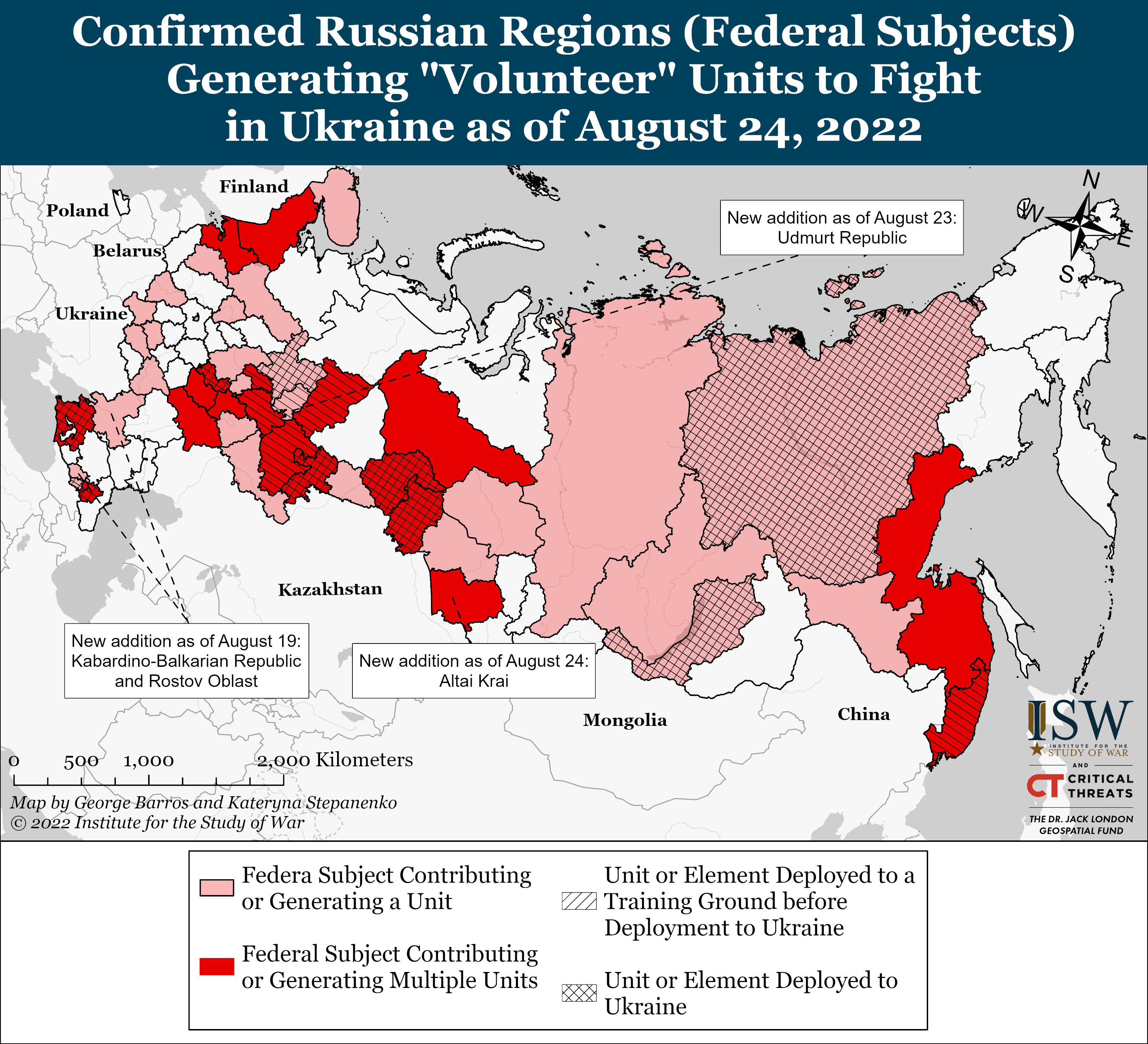 Russian-backed occupation administrators continued to face various challenges to their authority. A Ukrainian partisan improvised explosive device (IED) attack killed the Russian-appointed head of Mykhailivka, Zaporizhia Oblast on August 24, likely part of a wider campaign of Ukrainian partisans targeting specific Russian-backed administrators who are attempting to advance the integration of occupied regions into the Russian system.[37] The Ukrainian Resistance Center also reported that Russian forces in occupied Luhansk Oblast dispersed a rally held by the wives, mothers, and relatives of Luhansk People’s Republic (LNR) forces who have been captured by Ukrainian forces.[38] Predatory mobilization processes in the LNR and reports that the Kremlin considers DNR and LNR fighters the lowest priority in prisoner exchanges are likely exacerbating social friction in the LNR and complicating the consistent administration of occupation regimes.[39]

Russian-backed proxy leaders continue to take measures to oversee the legislative and administrative integration of occupied territories into corresponding Russian systems. DNR Head Denis Pushilin met with Russian State Duma Deputy Vyacheslav Volodin on August 24 to discuss the intensification of efforts to harmonize the legislative institutions of the DNR with Russian legislative processes.[40] The harmonization of the DNR’s legislative process with Russia’s will likely afford the Kremlin increased legal control and oversight of the internal legal and bureaucratic affairs of proxy republics. LNR Head Leonid Pasechnik met with a United Russia Party delegation to discuss United Russia’s provision of “comprehensive assistance” to Donbas, including educational support.[41] Pasechnik also further confirmed that Russian authorities are engaging in the deportation of children from occupied areas in Ukraine to Russia and stated that his administration plans to identify children “in need of psychological help” and transfer them to Kislovodsk for “rehabilitation.”[42] As ISW has previously reported, Russian authorities are likely using the guise of education camps and psychological rehabilitation in order to facilitate the transfer of children to Russia as part of a wider population replacement campaign.[43]