Russian forces remain in a theater-wide operational pause in Ukraine. Russian forces continue to regroup, rest, refit, and reconstitute; bombard critical areas to set conditions for future ground offensives; and conduct limited probing attacks. The Russian Ministry of Defense did not claim any new territorial control on July 12.[1] ISW has previously noted that an operational pause does not mean a cessation of attacks.[2] Current Russian offensive actions are likely meant to prepare for future offensives, the timing of which remains unclear.

White House National Security Advisor Jake Sullivan reported on July 11 that Iran will provide Russia with “up to several hundred UAVs” on an expedited timeline.[3] Sullivan did not specify the kinds of drones Iran will be supplying. AEI’s Critical Threats Project has provided a quick summary of the basic kinds and capabilities of Iranian drones. Sullivan noted that Iran will also provide weapons-capable UAVs and train Russian forces to use Iranian drones as early as July. Russian milbloggers and war correspondents have long criticized the Kremlin for ineffective aerial reconnaissance and artillery fire correction measures due to the lack of UAVs. Former Russian military commander and milblogger Igor Girkin stated that Ukrainian forces have successfully defended the Donetsk Oblast frontline due to the advantage of Ukrainian UAV capabilities in the area.[4] Russian milblogger Andrey Morozov (also known as Boytsevoi Kot Murz) blamed Russian state media for grossly misrepresenting the availability of Russian UAVs and their ability to support accurate artillery fire.[5] Russian frontline correspondent Alexander Sladkov also complained that Russian forces can build more drones but have not done so.[6] 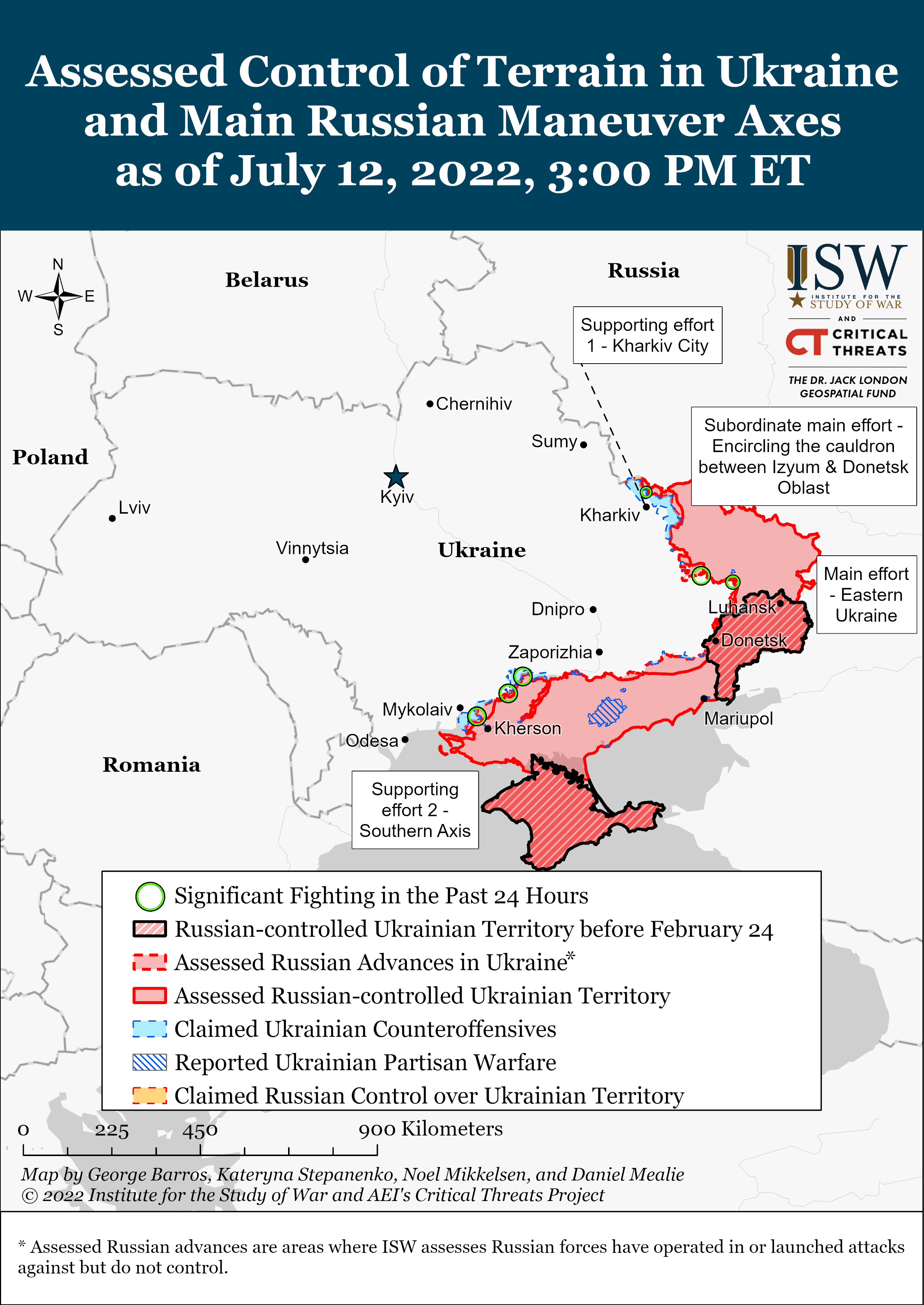 Russian forces attempted ground assaults north of Slovyansk on July 12. The Ukrainian General Staff reported that Ukrainian forces repelled Russian ground assaults toward Dovhenke, Mazanivka, Krasnopillia, and Dolyna west of the E40 highway and Mayaky and Ivanivka east of the E40 highway.[7] ISW has not observed evidence of Russian forces crossing the Siverskyi Donets River near Mayaky and Sydorove, but Russian forces may seek to do so to push south to the E40 highway. Such a push could be an effort to encircle the Ukrainian salient between Dolyna, Bohorodychne, Pryshb, and Mayaky given that the Russian frontal assaults against Dolyna and Bohordodychne have been unsuccessful. The many water features in this area make such a maneuver difficult, however. Russian forces continued shelling areas west, northwest, and northeast of Slovyansk including Mazanivka, Dibrovne, Barvinkove, Velyka Komyshuvakha, and Chepil.[8] Russian forces will likely continue to strike areas around Slovyansk to set conditions for a renewed offensive toward Slovyansk and Kramatorsk. 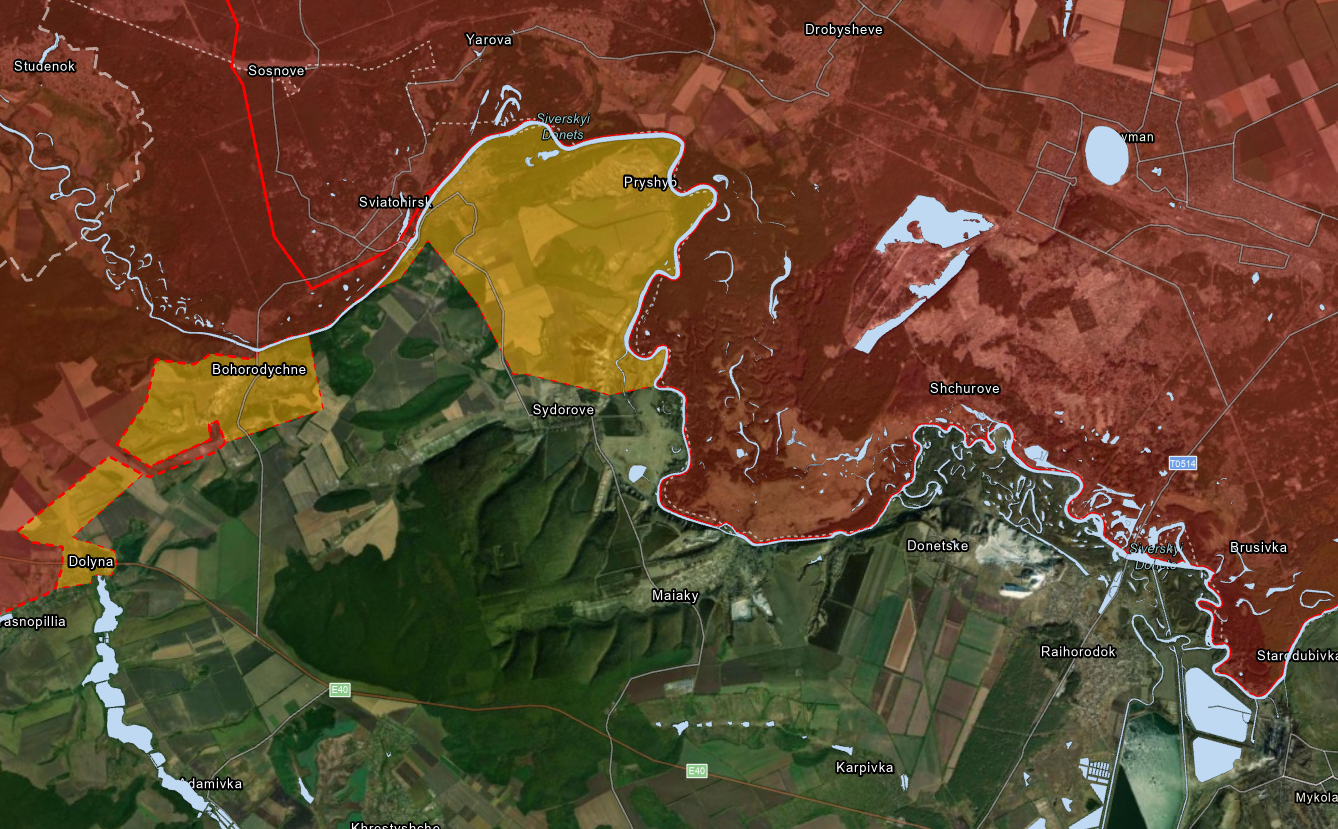 [This image shows the many water features present around the Ukrainian salient. Source: Esri, Maxar, Earthstar Geographics, and the GIS User Community]

Russian forces conducted air and artillery strikes to the northeast, east, and south of Bakhmut on July 12.[12] The Ukrainian General Staff reported that Russian forces in the Bakhmut and Novopavlivka directions are trying to improve their tactical positions and are striking along the line of contact to restrain Ukrainian forces.[13] 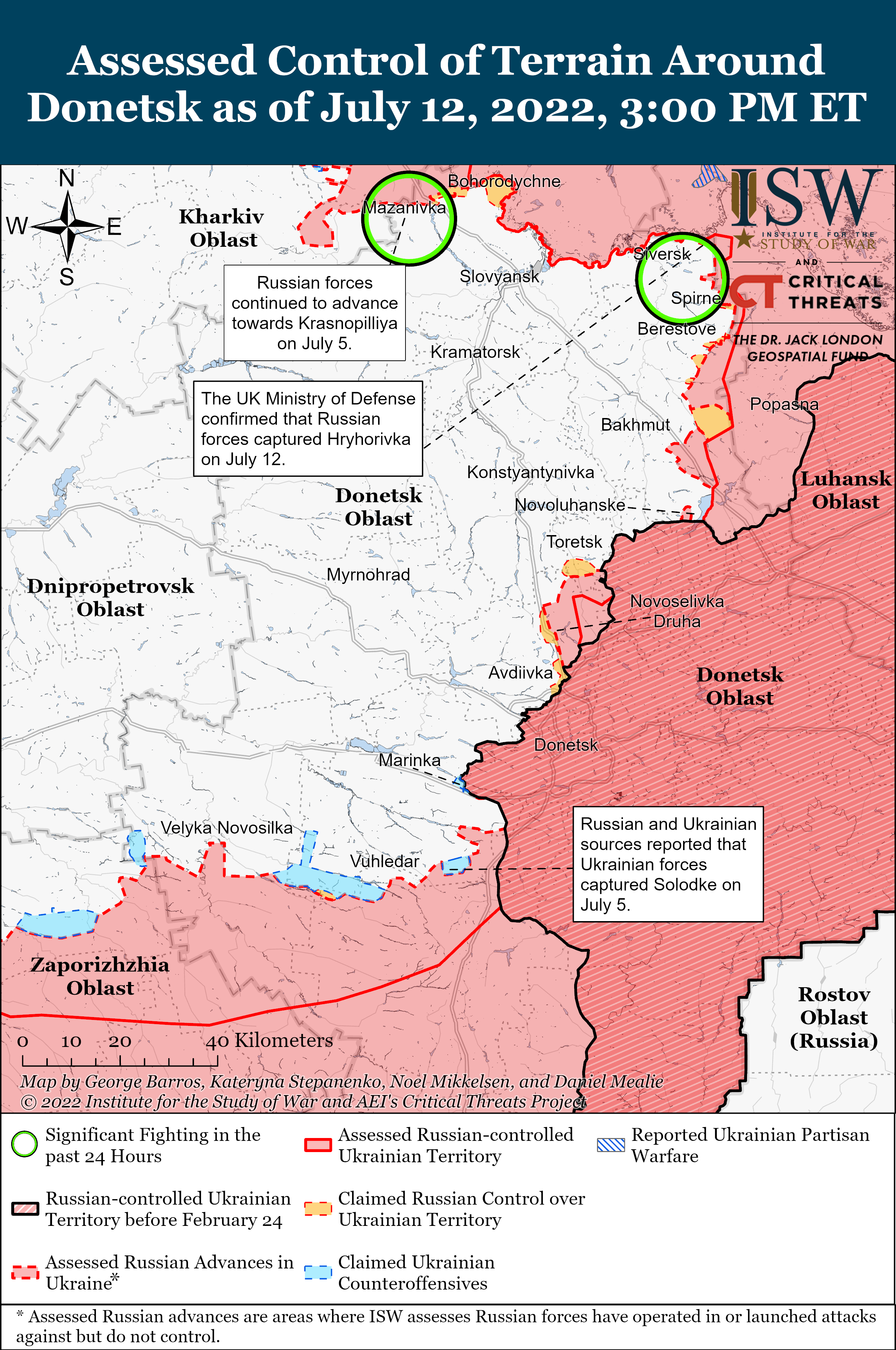 Russian forces conducted multiple unsuccessful ground assaults on Dementiivka on July 12.[16] Persistent Russian attacks against Dementiivka are likely intended to disrupt ongoing Ukrainian counterattacks from Prudyanka north toward Russian positions in Tsupivka.[17] The Ukrainian General Staff reported that Russian forces fired artillery and rocket fire salvo systems at Kharkiv City districts and nearby settlements to the north and northeast.[18] The Derhachi Regional Administration reported that positional battles are ongoing in the northern part of Derhachivskyi Raion.[19] 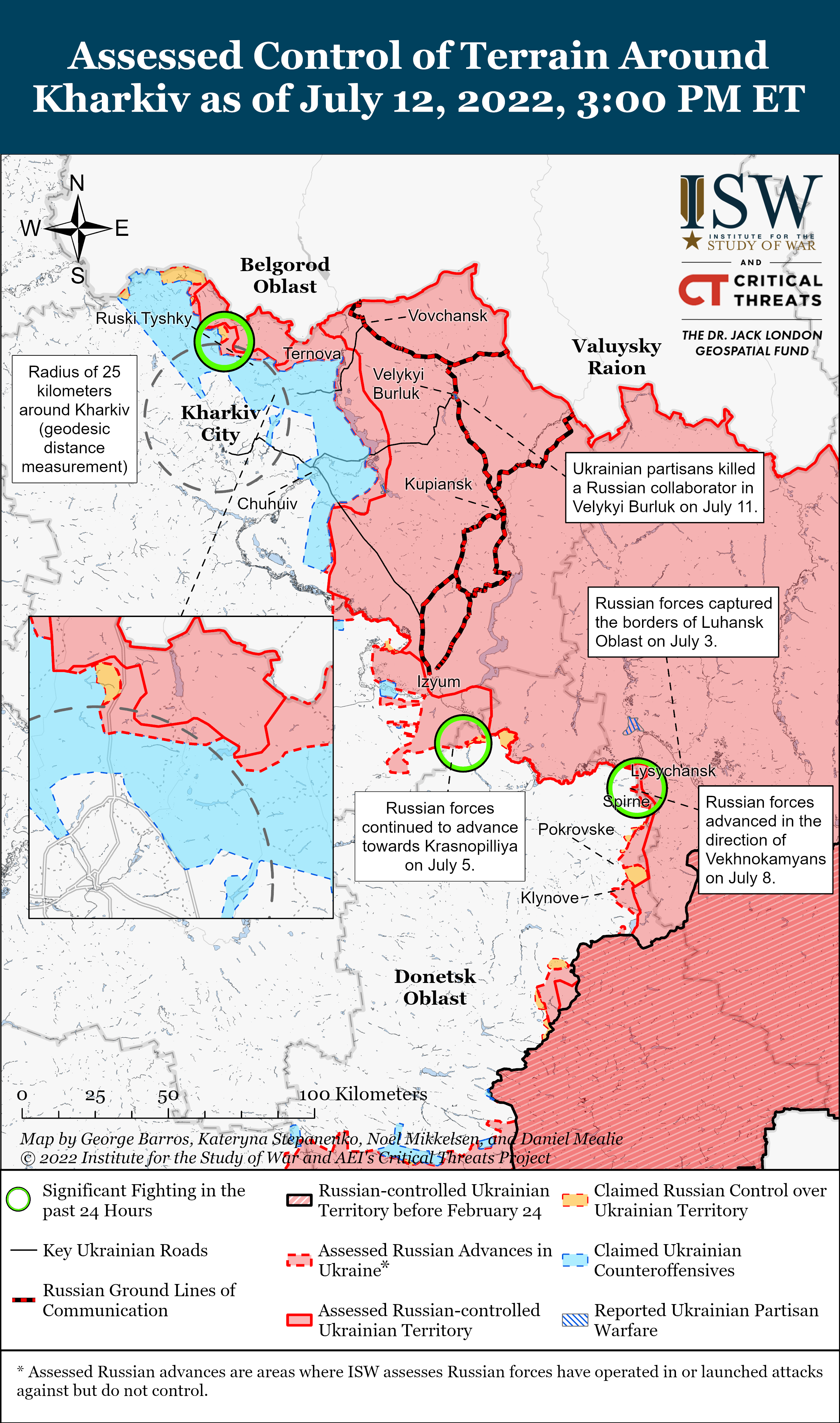 Russian forces likely conducted false-flag attacks in Enerhodar, Zaporizhia Oblast, amidst Ukrainian official announcements for civilians to evacuate from occupied territories. Ukrainian Vice Prime Minister Iryna Vereschuk made another announcement on July 10 calling on civilians to evacuate occupied settlements in Kherson and Zaporizhia Oblast before the start of Ukrainian counteroffensives, even if that required civilians to flee to occupied Crimea.[24] Vereschuk made similar announcements on July 8 and June 20, noting that Russian forces seek to hold Ukrainian civilians as human shields to hinder Ukrainian counteroffensives along the Southern Axis.[25] Social media users from Enerhodar reported a series of explosions and smoke rising from the industrial zone in the city, and geolocated imagery showed that the smoke originated from the direction of the Zaporizhzhia Nuclear Power Plant (NPP) on July 12.[26] Pro-Kremlin sources claimed that Ukrainian forces shelled Enerhodar and used three loitering munitions near the Zaporizhzhia NPP; pro-Russian Telegram channel Rybar claimed that Ukrainian forces are insinuating panic to encourage civilian evacuations.[27] Enerhodar Mayor Dmytro Orlov said that Russian forces staged the attacks on Enerhodar to cause panic and rapid evacuation at the nearby checkpoint in Vasylivka (approximately 45 km south of Zaporizhia City).[28] Russian forces reportedly closed the Vasylivka checkpoint on July 12 and are also preventing Melitopol residents from leaving that city.[29] Orlov previously warned on July 10 that Russian forces gathered media representatives in Enerhodar to stage a provocation at the Zaporizhzhia NPP.[30] Russian forces may have staged a provocation in anticipation of a Ukrainian counteroffensive or to spin Ukrainian attacks on ammunition dumps across the Southern Axis as an effort to target civilians or civilian infrastructure. 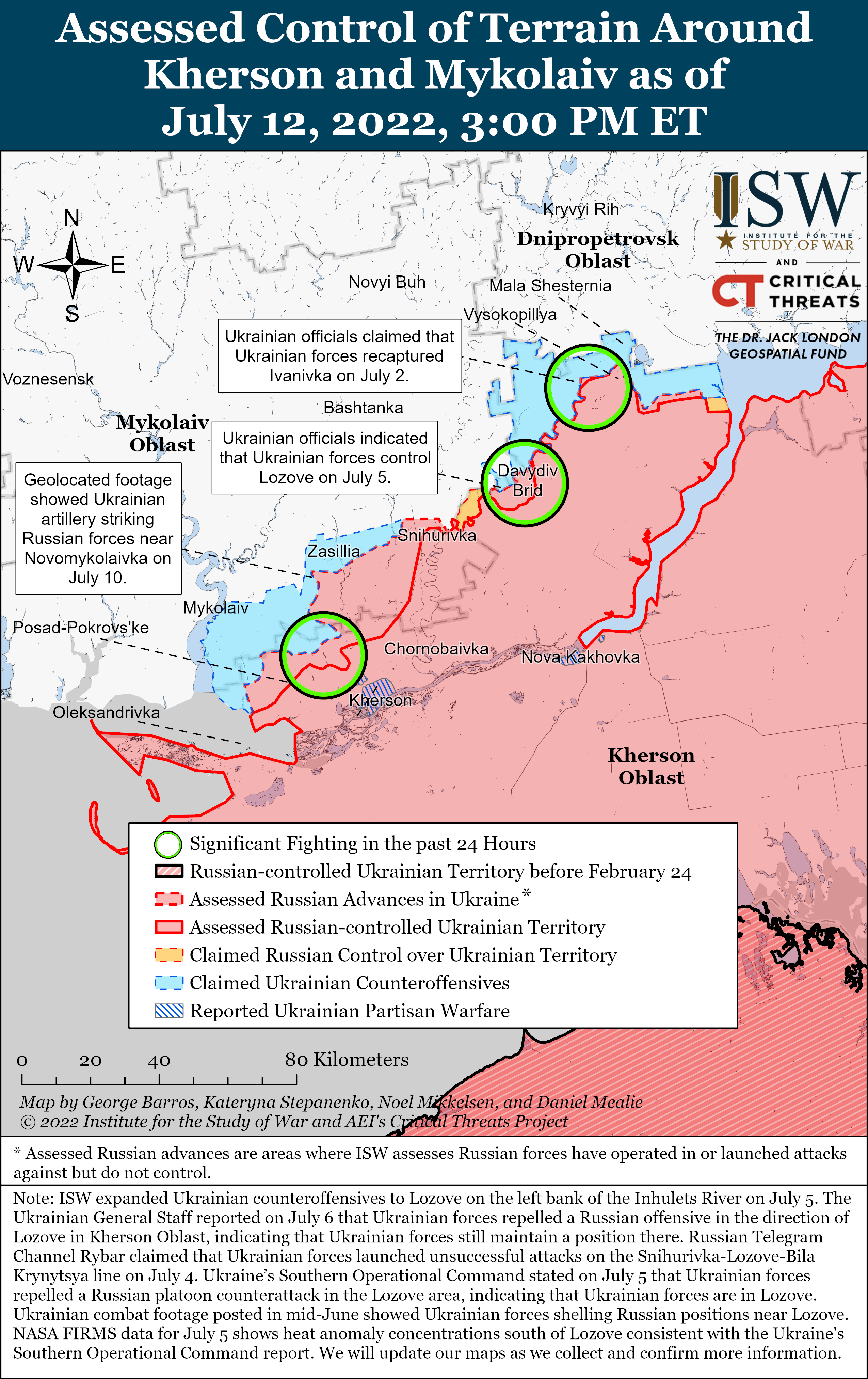 Russian forces are reportedly forming a new brigade-level combat unit in Kherson Oblast and are continuing to face personnel shortages. The GUR reported that Russian forces are recruiting Russian officers to staff a new brigade-level unit in Kherson Oblast, but officers are refusing to participate in the deployment.[37] The GUR also reported that Russian military command dismissed over 26 servicemen of the 38th Anti-Aircraft Missile Brigade who refused to participate in the war.[38] The Russia-based “Free Buryatia Foundation” (a small ethnic minorities’ rights organization established after the Russian invasion of Ukraine) reported that 150 Buryat servicemen refused to fight and returned home on July 7.[39] The BBC had previously confirmed that the Republic of Buryatia has lost 207 servicemen of the 4,515 servicemen killed in action whom the BBC was able to verify. The Buryatia region losses were the second-highest of any region in the partial data presented by the investigation.[40]

Russian forces have reportedly lost other higher-level officers in combat in addition to the casualties among the 20th Motorized Rifle Division command echelons noted above, although the timing of these deaths is unclear. The Ukrainian Strategic Command reported on July 11 that Ukrainian forces killed Deputy Commander of the 106th Airborne Assault Division Colonel Sergey Kuzminov and Chief of Staff of the 16th Separate Guards SPETSNAZ Brigade Major Dmitriy Semenov.[41] Russian outlet Baza also reported on July 12 that a Ukrainian sabotage group attacked the Alania volunteer battalion in Huliaipole, eastern Zaporizhia Oblast, while Head of North Ossetian Republic Sergey Menyaylo was with the battalion on an unspecified past date; the attack injured several battalion members but not Menyaylo himself.[42] Such losses indicate that higher-level Russian commanders continue to oversee tactical maneuvers on the active frontlines and are suffering as a result.