Ukrainian intelligence assesses that the Russian military is extending its planning to fight a longer war, though Russian force generation and reserves likely remain poor. Deputy Head of the Ukrainian Main Intelligence Directorate (GUR) Vadym Skibitsky stated the GUR received confirmed information that Russian forces have extended their war planning for the next 120 days, extending to October 2022.[1] Skibitsky said that Russian forces will adjust the plan depending on their successes in Donbas and noted that the Russian General Staff is modifying their invasion plans almost every month.[2] Skibitsky’s statement likely indicates the Kremlin has, at a minimum, acknowledged it cannot achieve its objectives in Ukraine quickly and is further adjusting its military objectives in an attempt to correct the initial deficiencies in the invasion of Ukraine. Skibitsky also claimed that Russian forces have an additional 40 battalion tactical groups (BTGs) in reserve, after having already deployed 103 BTGs to Ukraine. This report is highly unlikely to mean Russian forces retain 40 full-strength and effective BTGs in Russia. At most, these “BTGs” are likely small collections of personnel cobbled together from other units. The Russian military is additionally unlikely to be holding such a significant portion of its force in reserve due to continuing manpower shortages in existing frontline units. 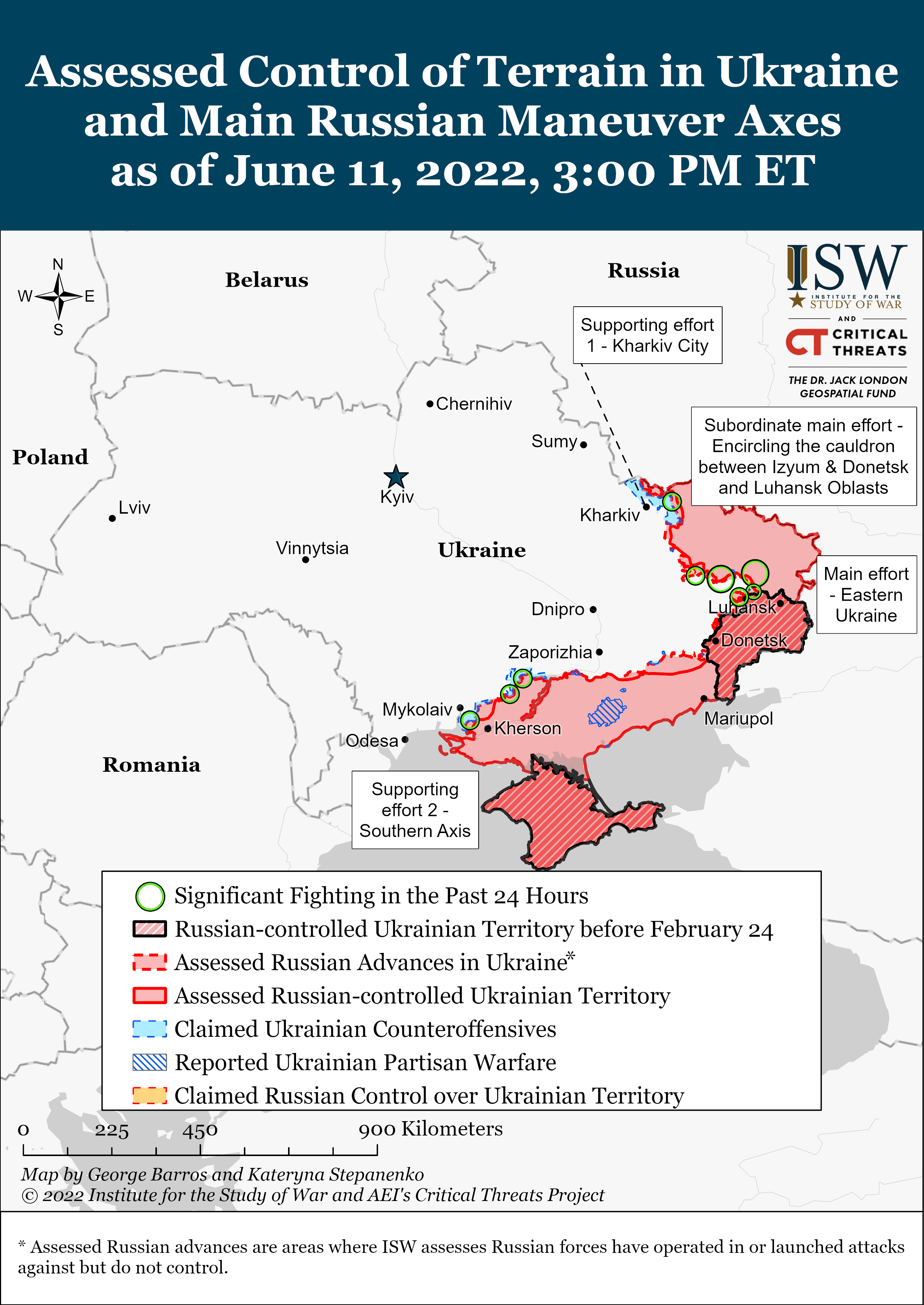 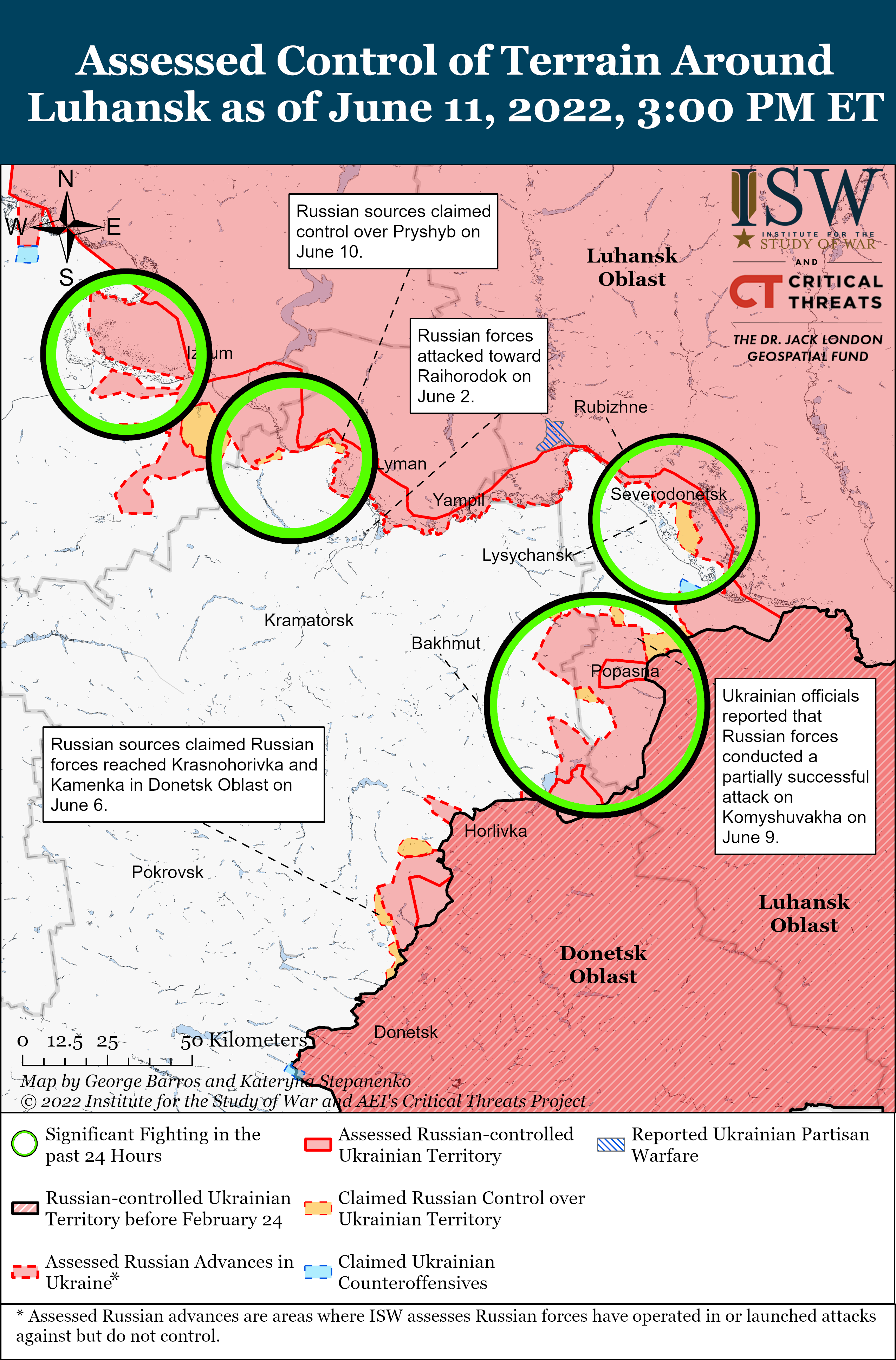 Russian forces conducted offensive operations east and west of Popasna likely to interdict Ukrainian ground lines of communication (GLOCs) to Lysychansk and Severodonetsk. Russian forces withdrew to their previously occupied position after launching failed attacks against Mykolaivka and Berestove, both located in the vicinity of the Bakhmut-Lysychansk T1302 highway.[8] The Ukrainian General Staff reported that Russian forces are also attempting to seize Nyrokove (approximately 5 km east of T1302) and fighting is ongoing in the area.[9] Ukrainian forces reportedly foiled Russian reconnaissance operations in Volodymyrivka, approximately 16 km east of Bakhmut. Russian forces are additionally resuming their operations to control the Hirske-Lysychansk T1303 highway, east of Popasna. Luhansk Oblast Head Serhiy Haidai stated that Russian forces entered Orihove (approximately 4 km east of T1303) and are strengthening positions at the northern outskirts of the settlement.[10] Geolocated footage showed that Russian and Chechen units also took control over a train station in Komyshuvakha (approximately 7 km west of T1303) and will likely attempt to link up with units advancing from Orihove.[11] 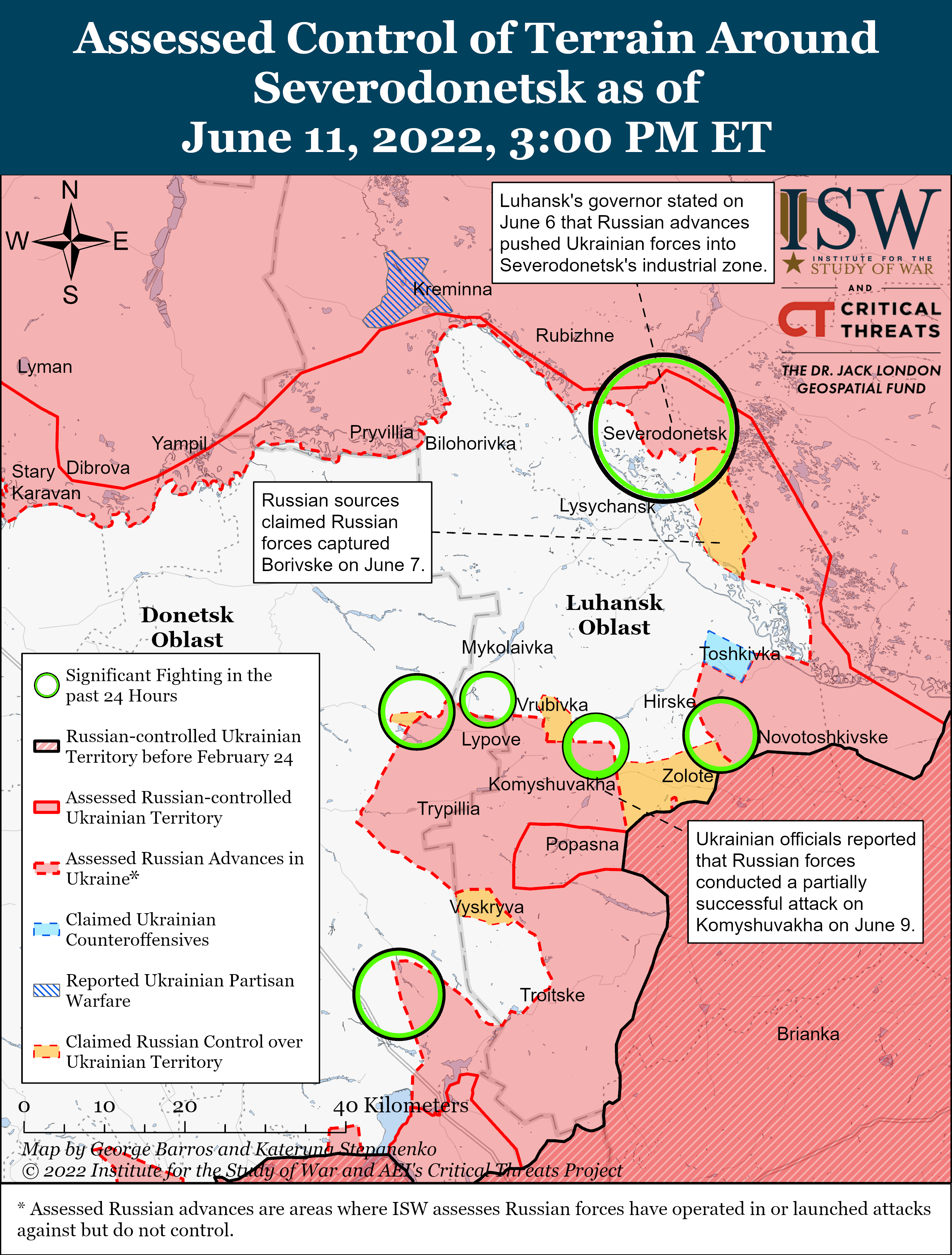 There were no significant developments in northern Kharkiv Oblast on June 11. Russian forces fired on Kharkiv City and Ukrainian positions northeast of the city.[18] Ukrainian forces continued to target Russian ammunition depots in occupied settlements south of Kharkiv City.[19] 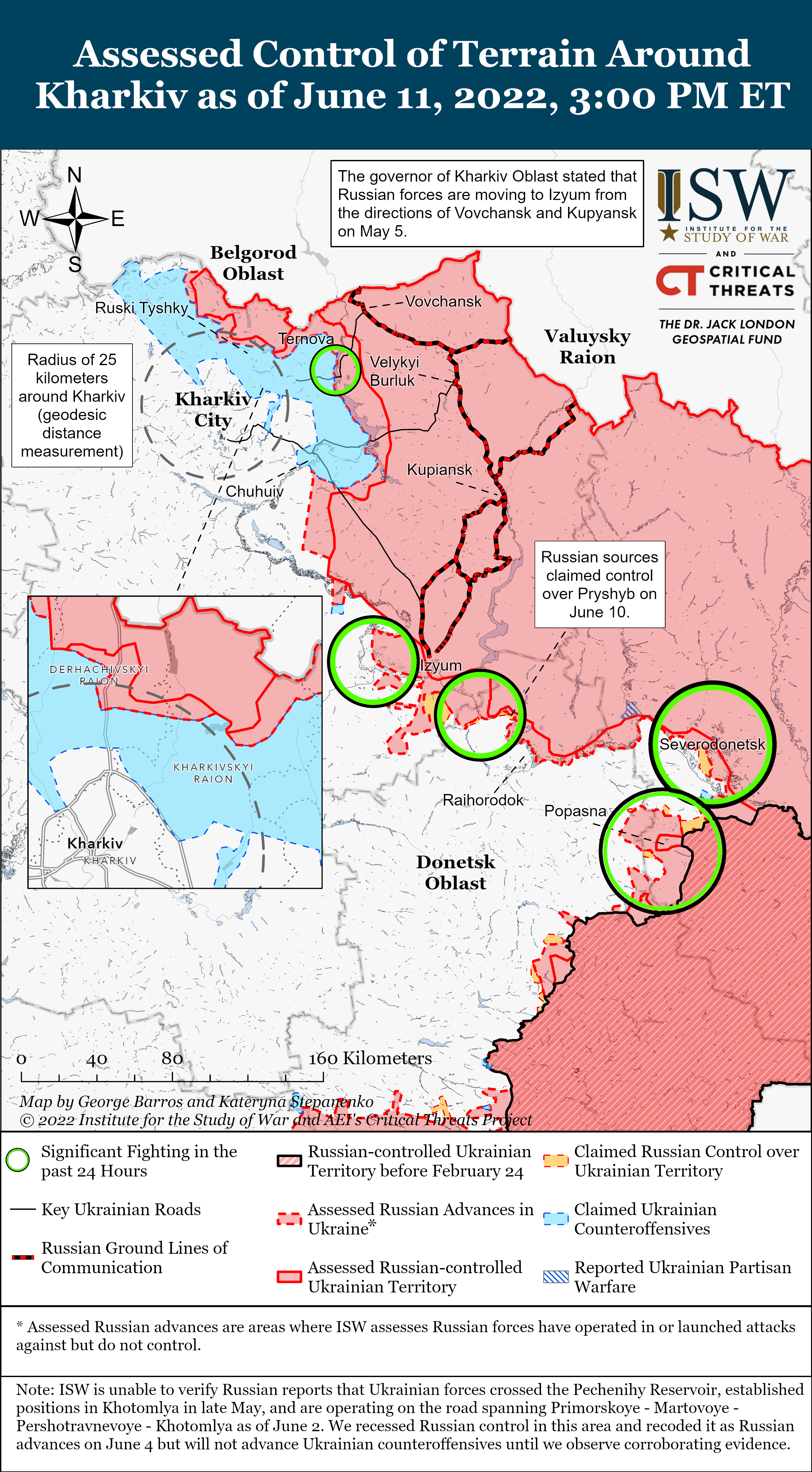 Russian forces did not resume offensive operations in Zaporizhia Oblast on June 11. Melitopol Mayor Ivan Fedorov noted that Ukrainian forces moved the Zaporizhia frontline 5 to 7 km south in the past two weeks, likely due to Russian prioritization of offensives around Luhansk Oblast or personnel rotations, though ISW cannot confirm the exact locations of these claimed Ukrainian gains.[23] 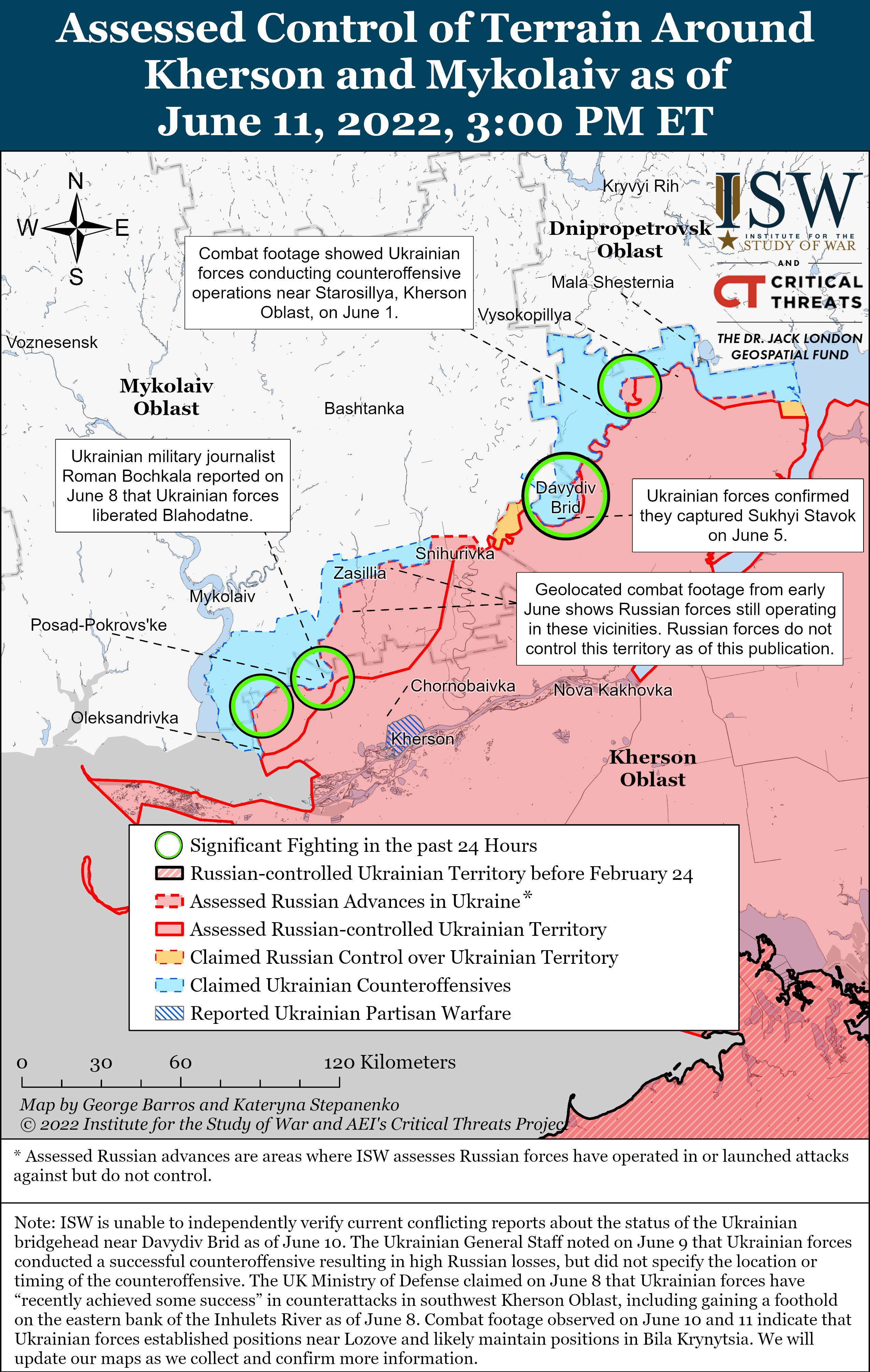