The Belarusian Armed Forces began a command-staff exercise focused on testing command and control capabilities on June 14. However, Belarus remains unlikely to join the war in Ukraine on behalf of Russia. Head of Logistics for the Belarusian Armed Forces Major General Andrei Burdyko announced that the exercise will involve military authorities, unspecified military units, and logistics organizations and is intended to improve the coherency of command-and-control and logistics support to increase the overall level of training and practical skills of personnel in a “dynamically changing environment.”[1] Despite the launch of this exercise, Belarus remains unlikely to join the war in Ukraine due to the threat of domestic unrest that President Alexander Lukashenko faces if he involves already-limited Belarusian military assets in combat.[2] Any Belarusian entrance into the war would also likely provoke further crippling sanctions on Belarus. Any unsupported Belarusian attack against northern Ukraine would likely be highly ineffective, and the quality of Belarusian troops remains low. ISW will continue to monitor Belarusian movements but does not forecast a Belarusian entrance into the war at this time.

Russian authorities may be accelerating plans to annex occupied areas of Ukraine and are arranging political and administrative contingencies for control of annexed territories. Russian military correspondent Sasha Kots posted an image of a map that was displayed at the St. Petersburg Economic Forum depicting a proposed scheme for the “administrative-territorial” division of Ukraine following the war on a three-to-five-year transition scale.[3] The proposed scheme divides Ukrainian oblasts into Russian “territorial districts" and suggests the manner in which Russian authorities hope to incorporate Ukrainian territory directly into Russia. Advisor to the Mayor of Mariupol Petro Andryushchenko additionally outlined a series of indicators that he claimed suggest that Russian authorities are planning to annex occupied Donetsk Oblast as soon as September 1, 2022.[4] Andryushchenko stated that the leadership of occupied Donetsk has entirely passed from authorities of the Donetsk People’s Republic (DNR) to Russian officials and that Russian educational authorities are already referring to Donetsk, Luhansk, Zaporizhia, and Kherson as regions of Russia. Andryushchenko additionally stated that the financial and legal systems in occupied Donetsk have already transitioned to Russian systems. Despite the apparent lack of a Kremlin-backed mandate concerning the condition of occupied areas, Russian authorities are likely pushing to expedite a comprehensive annexation process in order to consolidate control over Ukrainian territories and integrate them into Russia’s political and economic environment. However, the Kremlin retains several options in occupied Ukrainian territory and is not bound to any single annexation plan.

The Russian military leadership continues to expand its pool of eligible recruits by manipulating service requirements. Russian milblogger Yuri Kotyenok suggested that Russian authorities are preparing to increase the age limit for military service from 40 to 49 and to drop the existing requirement for past military service to serve in tank and motorized infantry units.[5] If true, the shift demonstrates the Kremlin's increasing desperation for recruits to fill frontline units, regardless of their poor skills. Kotyenok echoed calls made by other milbloggers to reduce the health requirements for those serving in rear and support roles.[6] Kotyenok additionally noted that while Russian recruits must have clean criminal records to serve, private military companies such as the Wagner Group will allow those with “mild misdemeanors” into service and that many of these low-level offenders have been mobilized into combat with Wagner in Donetsk and Luhansk. The Russian military leadership will likely continue efforts to expand the pool of eligible recruits, even at the cost of high-quality military personnel. 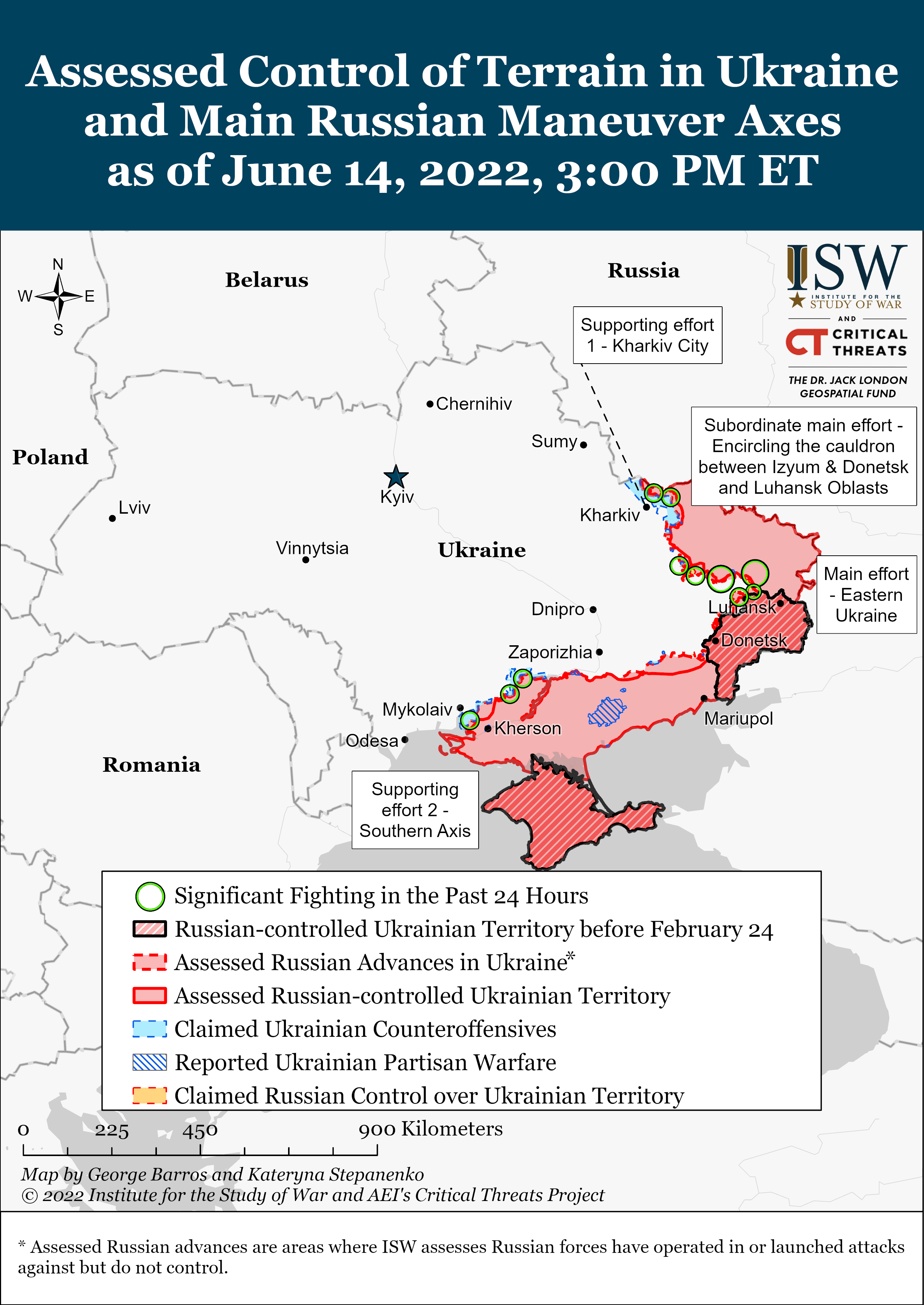 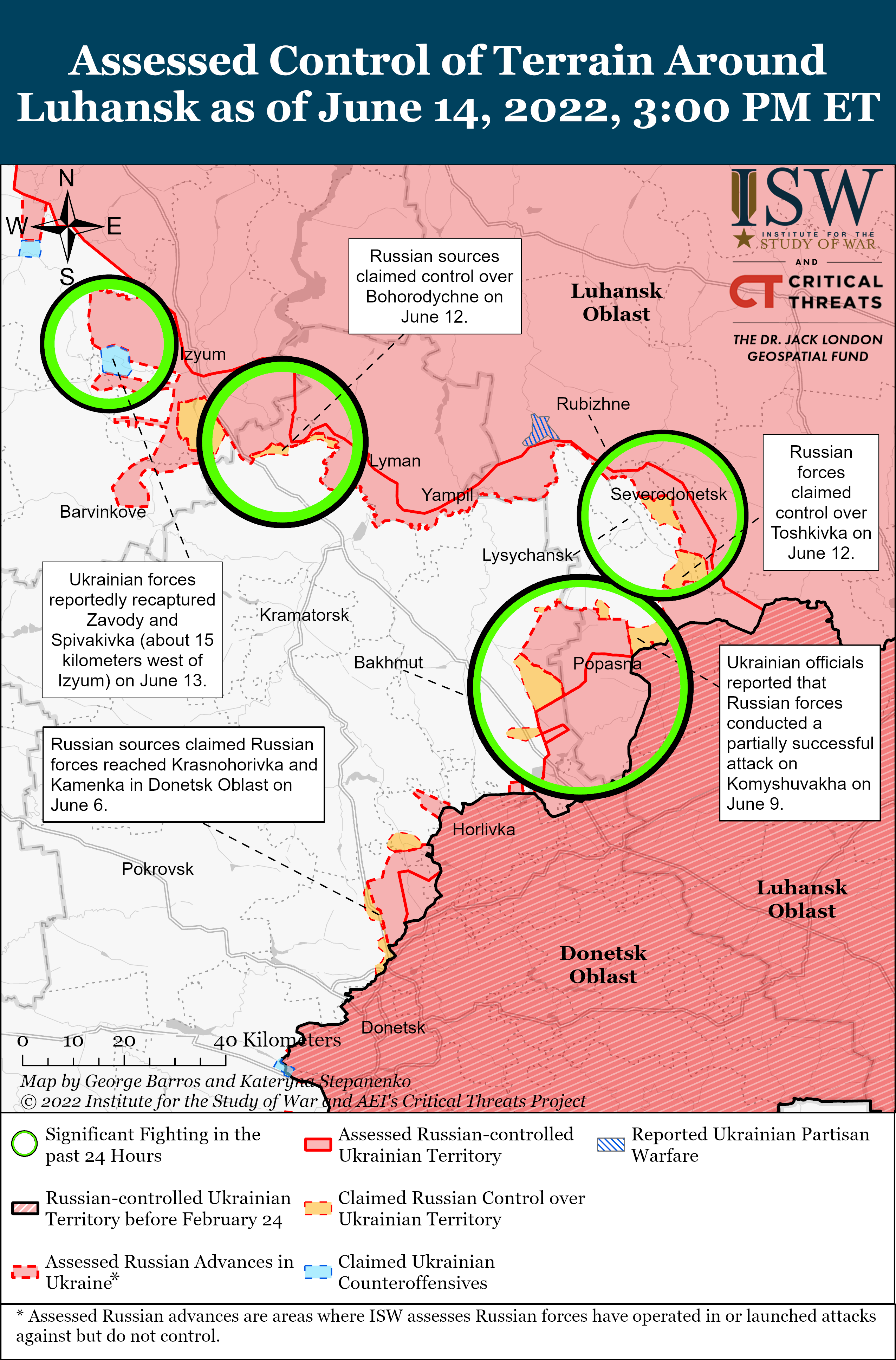 Russian forces continued ground, air, and artillery strikes to the east of Bakhmut on June 14.[16] Russian forces conducted attacks around Zolote, east of Bakhmut, and attacks to drive northward toward Bakhmut from Vidrodzhennya and Vershyna.[17] A Russian Telegram channel claimed that detachments of the Wagner Private Military Company took control of Vidrodzhennya and Roty, both to the southeast of Bakhmut.[18] Russian forces continued attempts to cut the T1302 Bakhmut-Lysychansk highway and are likely in position to interdict Ukrainian movements along sections of the highway via shelling as they continue assaults on Vrubivka and Berestove.[19] 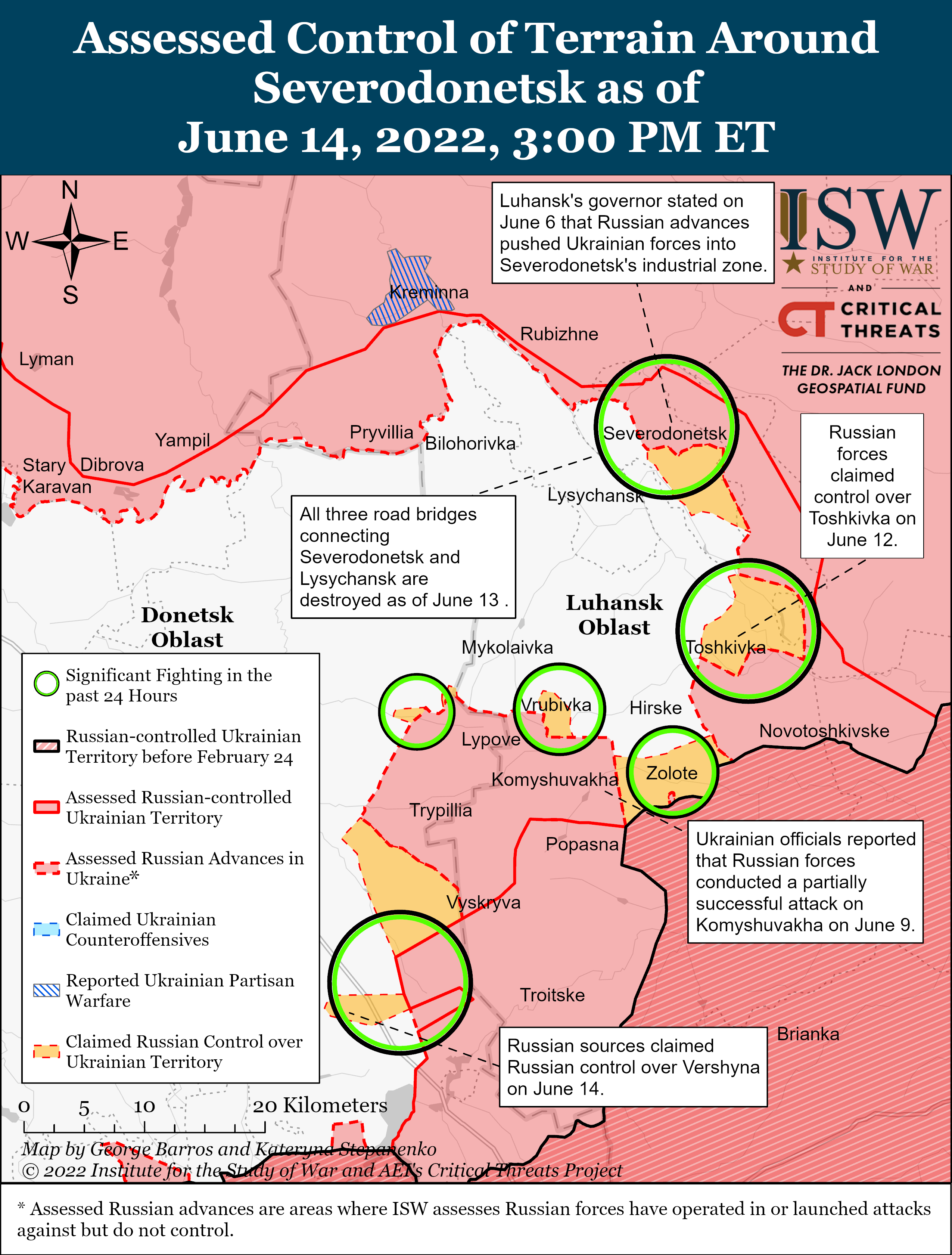 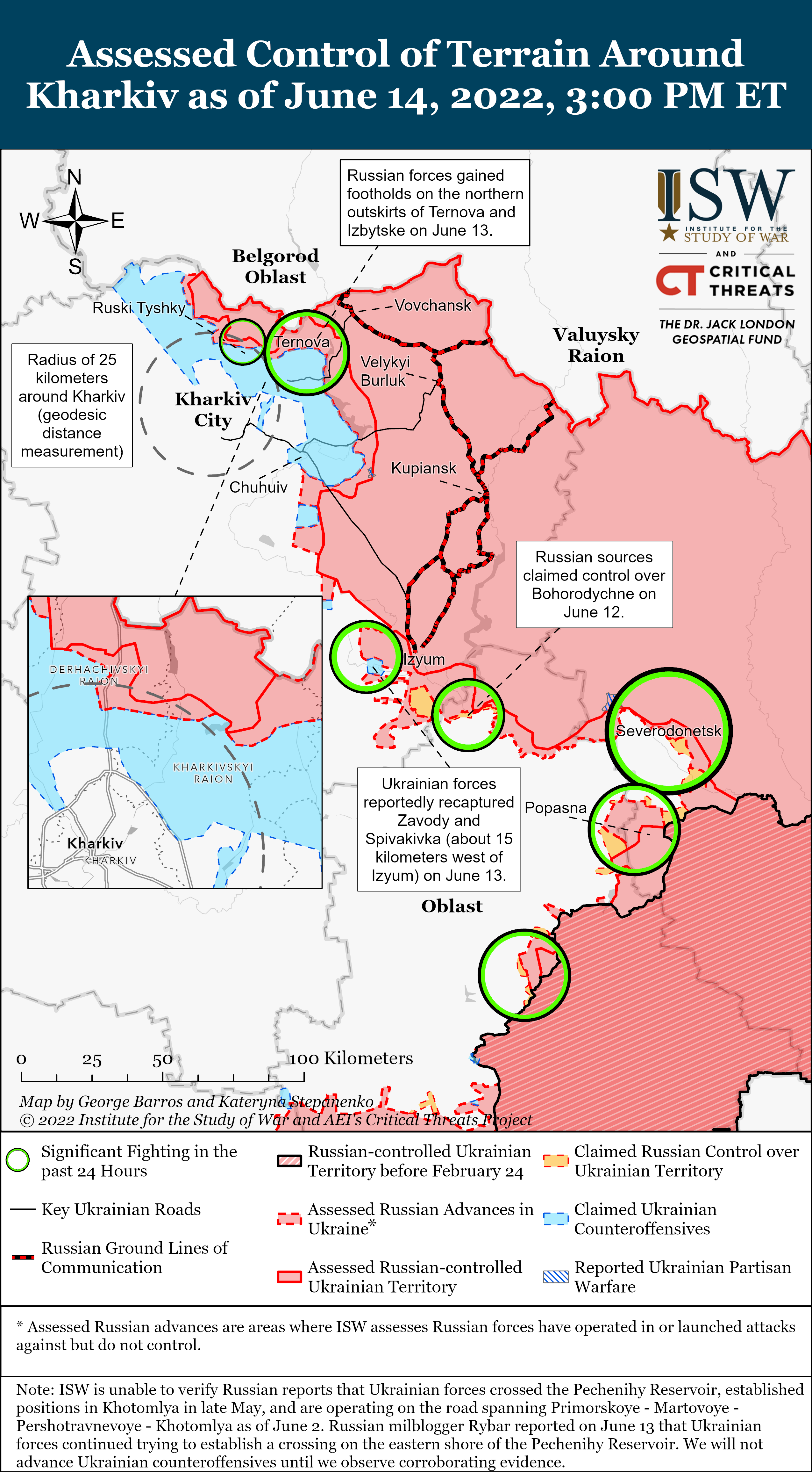 Recent Ukrainian counterattacks forced Russian troops to prioritize defensive operations along the Southern Axis on June 14.[24] Ukrainian forces have reportedly advanced to within 18 km of occupied parts of Kherson (though we cannot confirm their exact positions), which is likely placing considerable pressure on Russian forces to strengthen their defensive lines in the south.[25] Russian troops are reportedly mining unspecified locations on the bank of the Inhulets River in a likely response to Ukrainian counterattacks around Davydiv Brid in northwestern Kherson and toward Mykolaiv and Kryvyi Rih from occupied frontiers in Kherson.[26] Russian forces deployed one tube artillery battery and two rocket artillery batteries to areas near the Kherson-Mykolaiv Oblast border.[27] Russian forces continued to fire on Kherson, Dnipropetrovsk, and Zaporizhia Oblasts.[28] 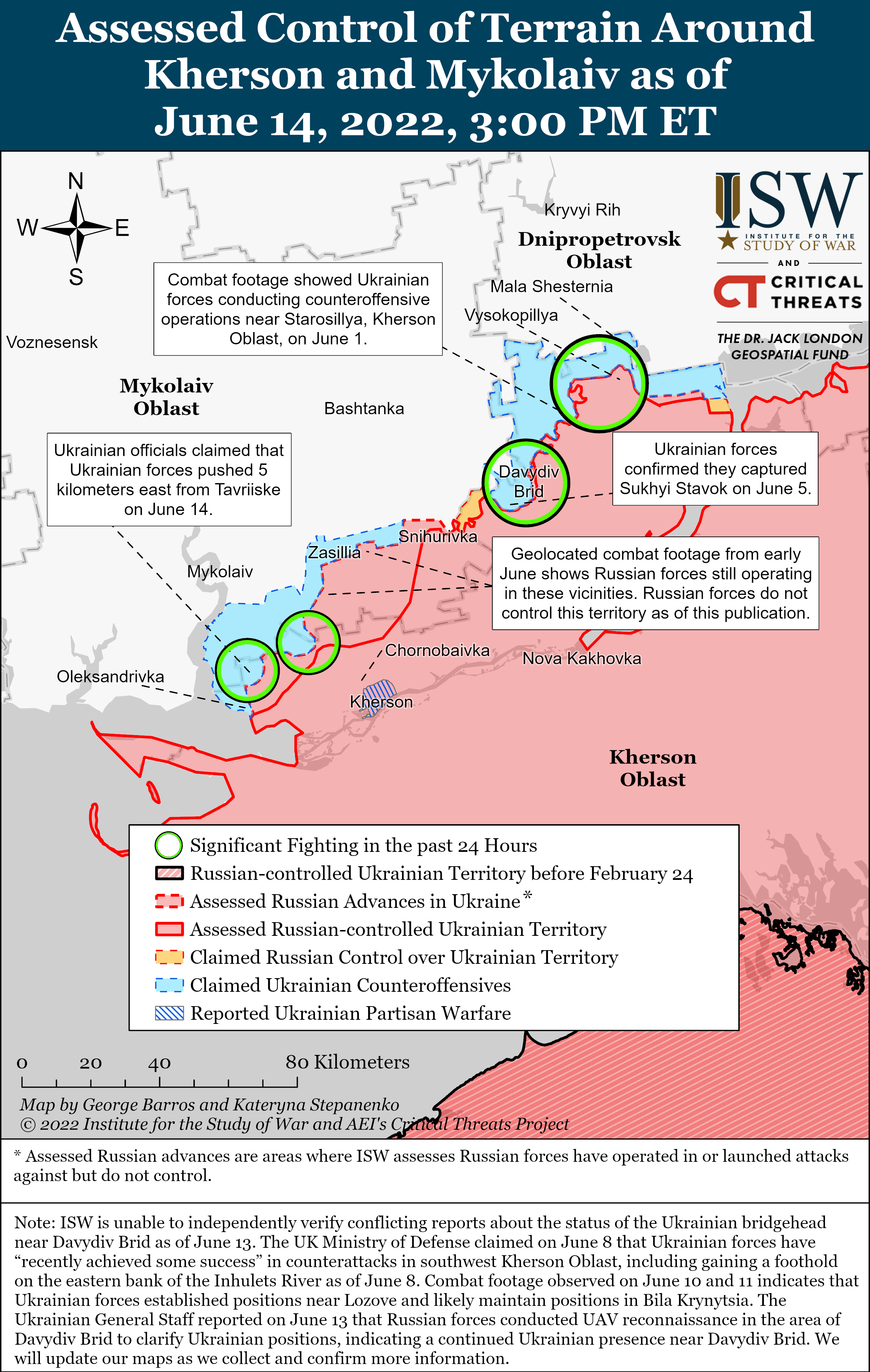