Russian forces may be abandoning efforts at a wide encirclement of Ukrainian troops along the Izyum-Slovyansk-Debaltseve line in favor of shallower encirclements of Severodonetsk and Lysychansk.  Russian forces likely control almost all of Rubizhne as of May 12 and have likely seized the town of Voevodivka, north of Severdonetsk.[1]  They will likely launch a ground offensive on or around Severodonetsk in the coming days.  The relative success of Russian operations in this area combined with their failure to advance from Izyum and the notable decline in the energy of that attempted advance suggest that they may be giving up on the Izyum axis.  Reports that Russian forces in Popasna are advancing north, toward Severodonetsk-Lysychansk, rather than east toward the Slovyansk-Debaltseve highway, support this hypothesis.

It is unclear if Russian forces can encircle, let alone capture, Severodonetsk and Lysychansk even if they focus their efforts on that much-reduced objective.  Russian offensives have bogged down every time they hit a built-up area throughout this war, and these areas are unlikely to be different. Continued and expanding reports of demoralization and refusals to fight among Russian units suggest that the effective combat power of Russian troops in the east continues to be low and may drop further.  If the Russians abandon efforts to advance from Izyum, moreover, Ukrainian forces would be able to concentrate their efforts on defending Severodonetsk-Lysychansk or, in the worst case, breaking a Russian encirclement before those settlements fall.

The Ukrainian counteroffensive around Kharkiv is also forcing the Russian command to make hard choices, as it was likely intended to do.  The UK Ministry of Defense reports that Russian forces pulled back from Kharkiv have been sent toward Rubizhne and Severodonetsk but at the cost of ceding ground in Kharkiv from which the Russians had been shelling the city.[2]  The counteroffensive is also forcing Russian units still near the city to focus their bombardment on the attacking Ukrainian troops rather than continuing their attacks on the city itself.  The Ukrainian counteroffensive near Kharkiv is starting to look very similar to the counteroffensive that ultimately drove Russian troops away from Kyiv and out of western Ukraine entirely, although it is too soon to tell if the Russians will make a similar decision here. 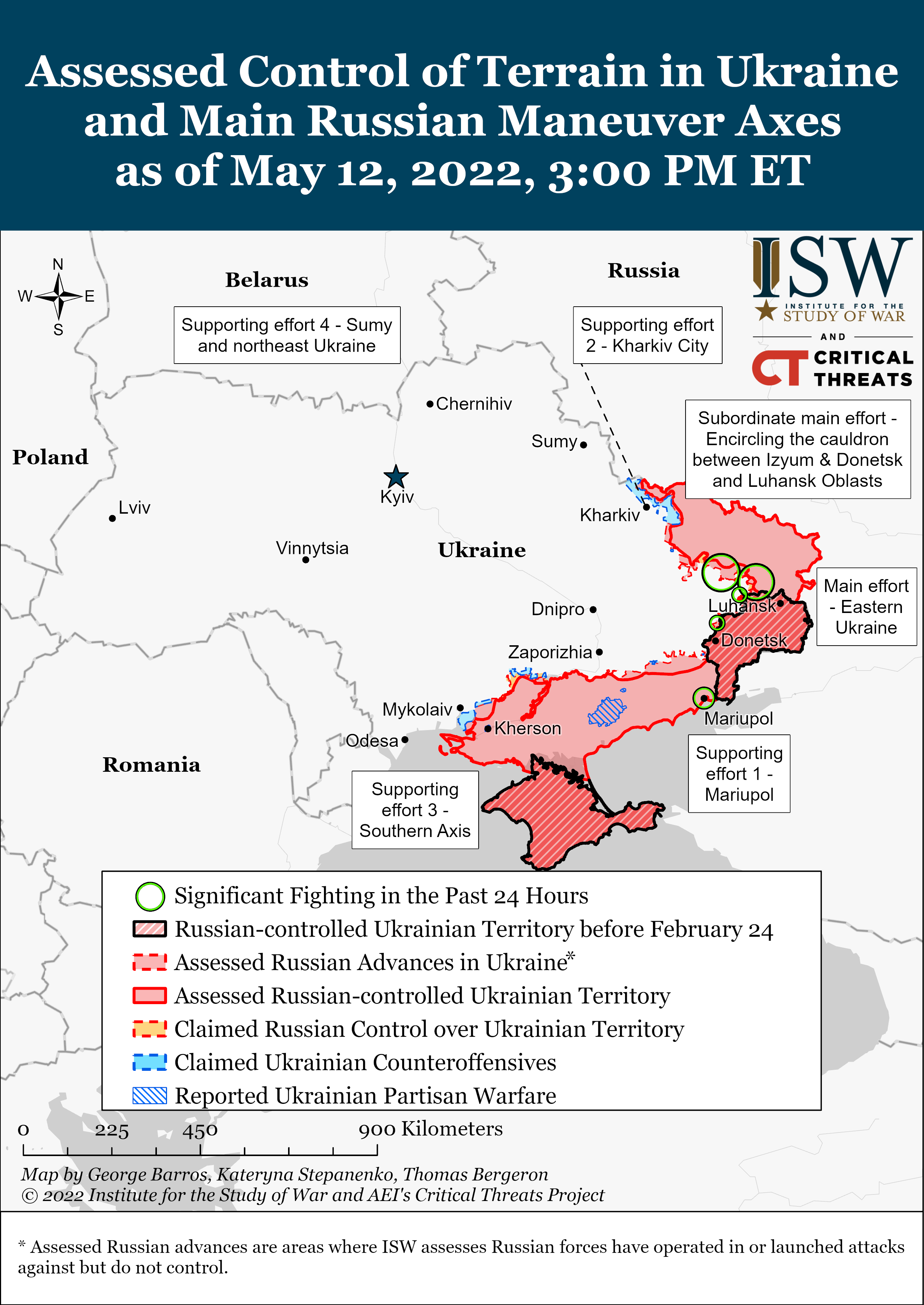 Russian forces did not make any confirmed advances around Izyum on May 12.[3] The Ukrainian General Staff reported that Russian forces transferred additional equipment and one battalion tactical group (BTG) to the Izyum area.[4] Russian forces launched unsuccessful assaults on Oleksandrivka and Novoselivka, 20 and 30 km east of Izyum respectively, to gain a foothold on the eastern bank of the Seversky Donets River.[5] The Russians may abandon attempts at a wide encirclement of Ukrainian forces from Izyum along the Slovyansk road in favor of smaller encirclements in Lyman, Kreminna, and Severodonetsk, The UK Defense Ministry reported that Russian units withdrawn from near Kharkiv City will likely replenish units on the eastern flank of the Seversky Donets River in an effort to defend the western flank of Russian lines of communication.[6] The Russian Defense Ministry claimed that Ukrainian forces fortified 170 km between Kramatorsk and Slovyansk and, falsely, that the Ukrainians are using civilians as human shields, likely in an attempt to set information conditions to explain the abandonment of the Izyum axis or justify the slow and limited advances in the area.[7]

Russian forces likely seized Rubizhne and made marginal advances to Voevodivka, a suburb of Severodonetsk. Luhansk Oblast Administration Head Serhiy Haidai said that Ukrainian forces partially control Rubizhne, but Ukrainian servicemen claimed that Ukrainian forces only have access to the T1302 highway exit on the settlement’s western outskirts.[8] The Luhansk People’s Republic and Chechen units entered the Zorya Chemical Plant between Rubizhne and Voevodivka on May 11. Fighting was ongoing at the plant as of May 12.[9] Ukrainian forces destroyed a second Russian pontoon bridge in the vicinity of Bilohorivka, approximately 13 km from Rubizhne, on May 11 to slow the Russian encirclement of the settlement from the northwestern direction.[10] Severodonetsk Regional State Administration Head Oleksandr Stryuk confirmed that Russian forces seized Voevodivka on May 12, contradicting the Ukrainian General Staff’s assertion that the Russian offensive was unsuccessful.[11] Russian forces will likely launch a ground offensive on Severodonetsk in the coming days once they fully secure Voevodivka.

Russian forces conducted several unsuccessful and disjointed offensive operations in northwestern Donetsk Oblast in the vicinity of Avdiivka.[12] Russian forces tried and failed to seize settlements north of Donetsk City, likely in an effort to advance via Bahmut to Kramatorsk and Slovyansk.[13] Ukrainian artillery continued to strike Russian forces on the western border of Donetsk Oblast, stopping Russian advances in the Bahmut and Zaporizhia City directions.[14] 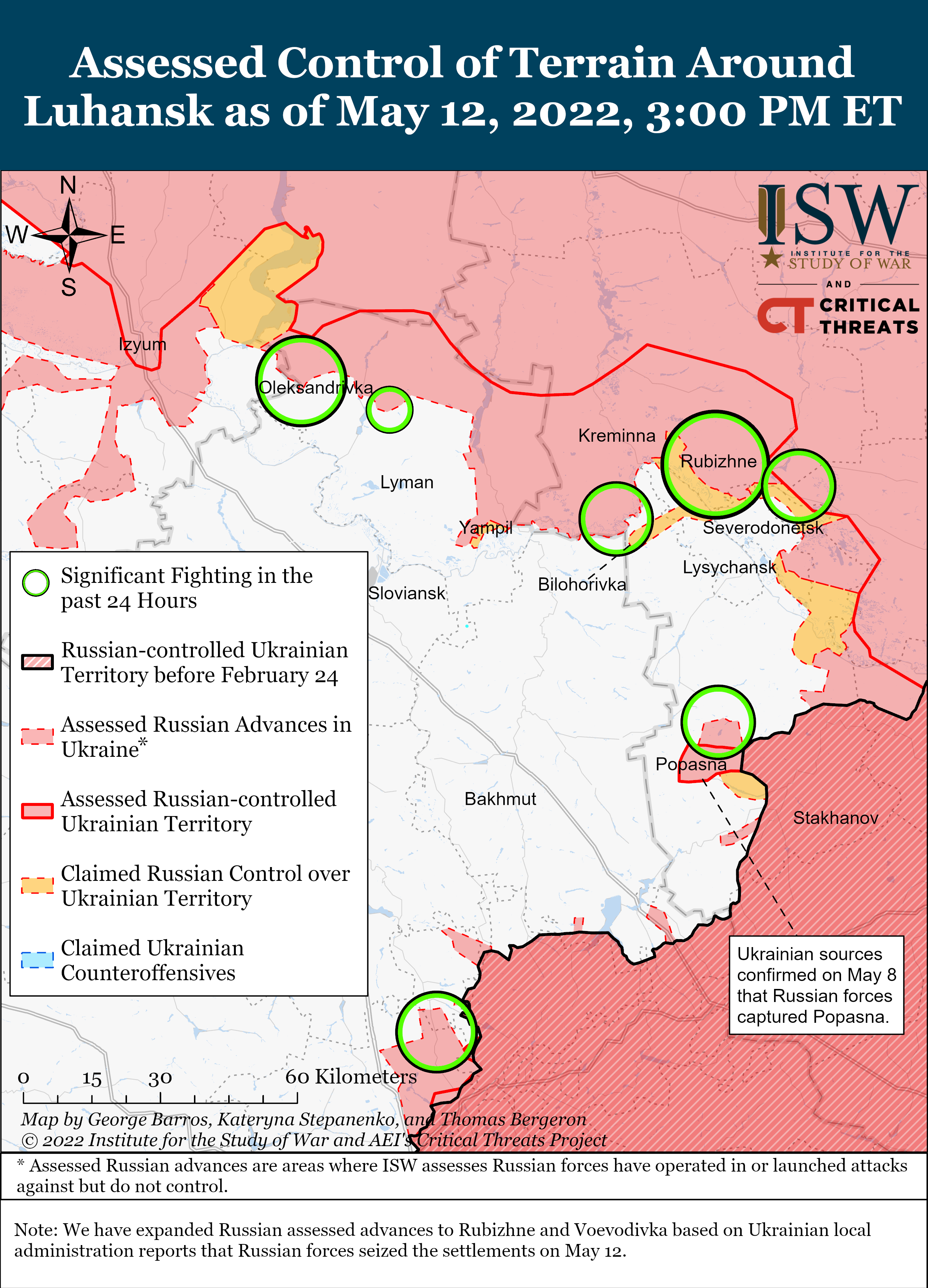 Russian forces continued to conduct air and artillery strikes against Ukrainian positions in the Azovstal Steel Plant on May 12.[15] Russian troops notably did not conduct a ground offensive on Azovstal on May 12 but rather focused on blocking Ukrainian defenders from using tunnels to exit the plant.[16]

Russian authorities additionally continued occupation activity in Mariupol. Advisor to the Mayor of Mariupol Petro Andryushchenko stated that Russian forces have established filtration checkpoints throughout the entire city to further consolidate control.[17] Andryushchenko noted that occupation authorities may hold a referendum for Mariupol to join Russia as soon as May 15, which is consistent with earlier reporting that children in Mariupol and the surrounding areas are signing their school notebooks with “Mariupol, Rostov Region, Russia.”[18] 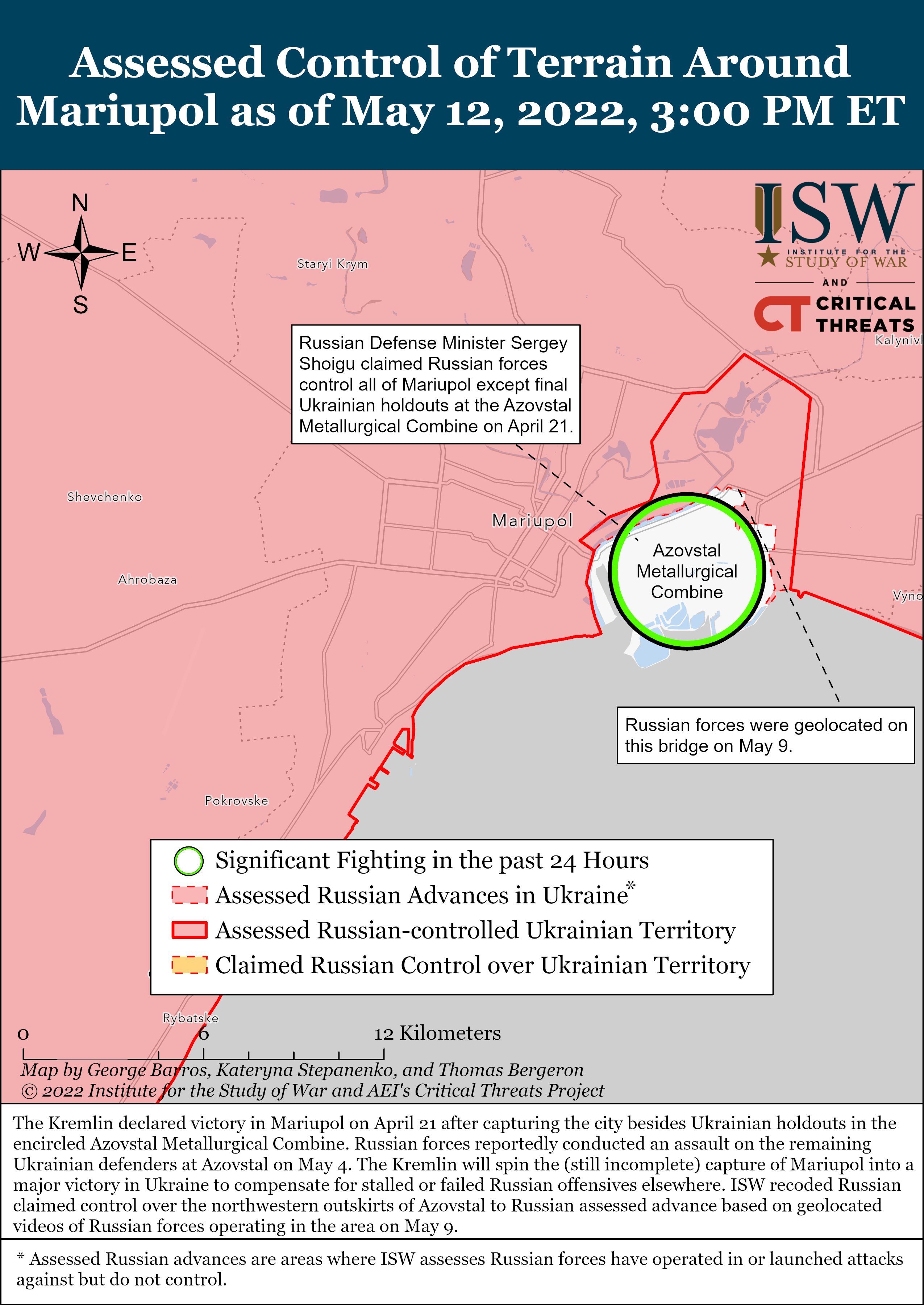 Russian forces continued their defensive against Ukrainian gains made by the on-going Ukrainian counteroffensive northeast of Kharkiv City on May 12. Neither Russian nor Ukrainian forces made any confirmed advances in northern Kharkiv Oblast in the last 24 hours. The Ukrainian General Staff stated that Russian forces are focusing on regrouping troops and firing intensively on Ukrainian positions in Pytomnyk and Ruski Tyshky (both within 20 kilometers north of the northern border Kharkiv City) to prevent a further northward advance toward the Russian border.[19] Head of Kharkiv Regional State Administration Oleg Synegubov noted that Russian forces did not shell Kharkiv City on May 12, which indicates that Russian troops are likely largely out of artillery range of the city and that fire from units that are still in range is likely being directed at Ukrainian troops advancing on Russian positions instead of civilian suburbs.[20] 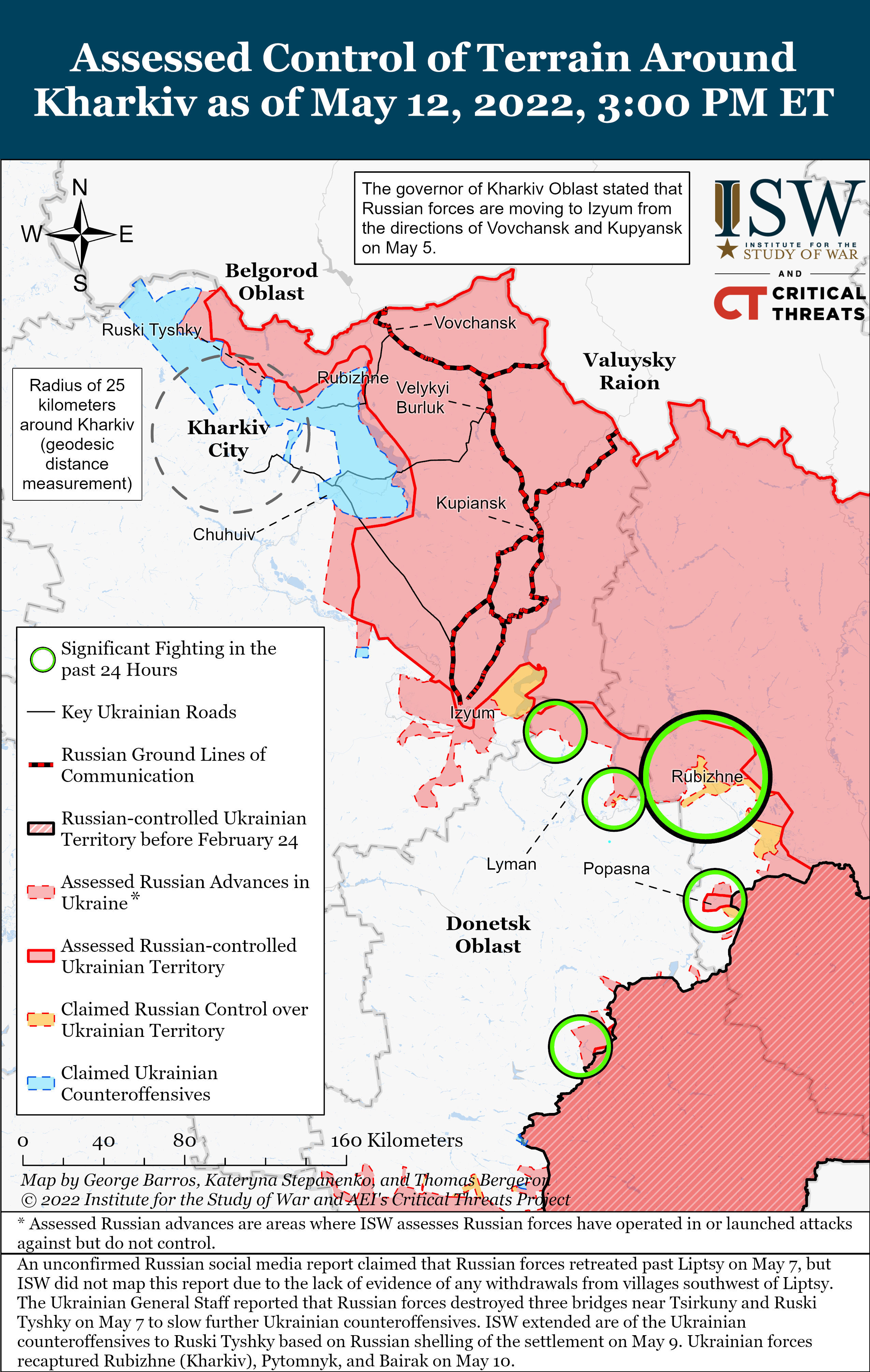 Russian forces attempted to improve their positions along the Southern Axis and continued to fire on Ukrainian troops but did not make any confirmed advances on May 12.[21] Ukrainian Operational Command “South” emphasized that Russian forces are conducting hostilities along the Mykolaiv-Kherson border in order to launch an offensive into Mykolaiv.[22] Russian forces additionally fired on Zaporizhia, Mykolaiv, Dnipropetrovsk Oblasts, and Kryvyi Rih.[23]

The Ukrainian Ministry of Defense stated that the Russian grouping on Snake Island is trying to improve its position on the island in an effort to block Ukrainian maritime communications and capabilities in the northwestern Black Sea, particularly toward Odesa.[24] The Ukrainian General Staff noted that Russian forces have built up their air defense system in Western Crimea in a likely attempt to provide air cover for naval activities in the northwestern Black Sea.[25] 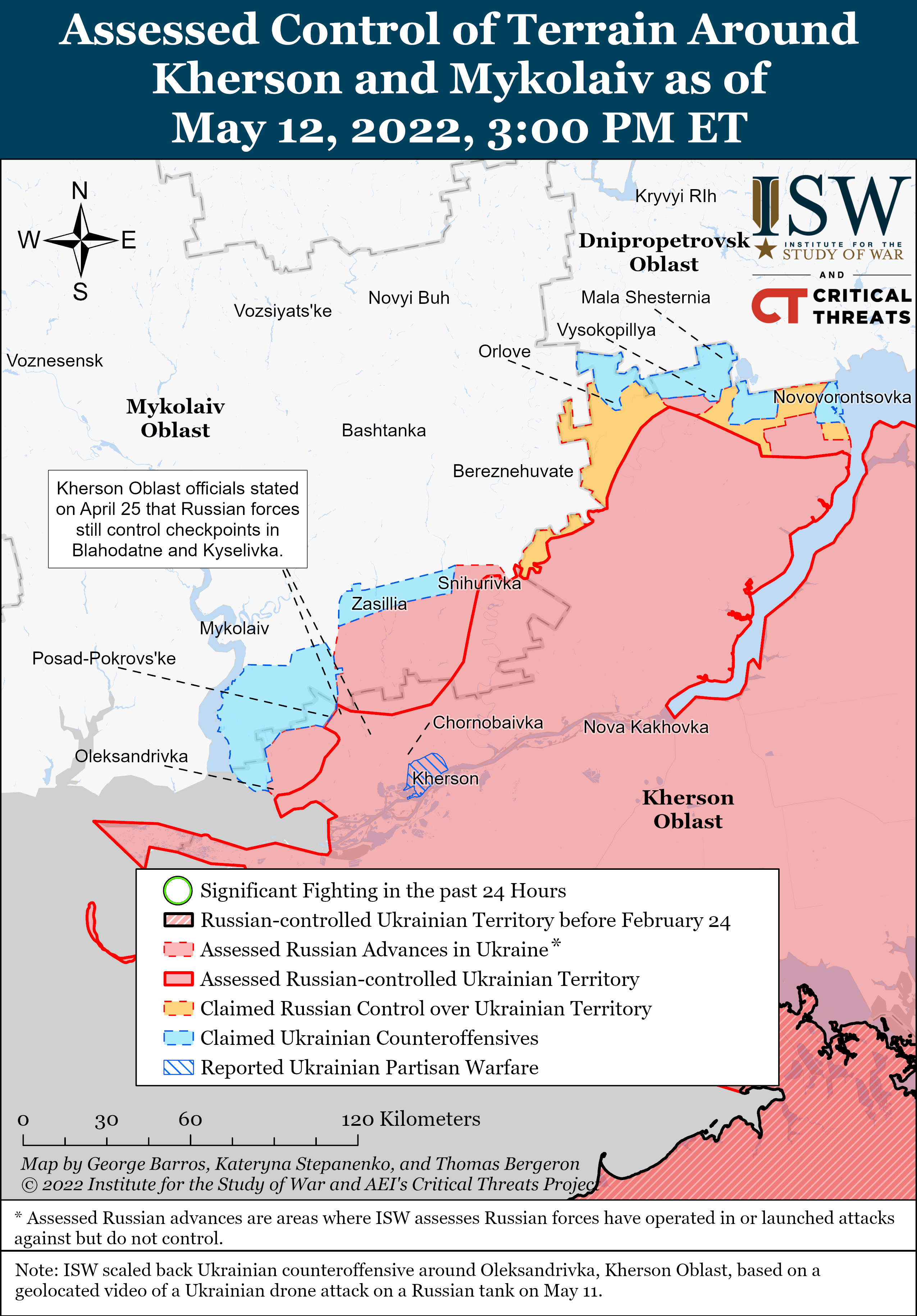