Russian forces made only minimal gains in eastern Ukraine on May 22. New reporting confirmed that Russian troops previously recaptured Rubizhne in northern Kharkiv Oblast, on May 19. Russian forces are likely committing additional reinforcements to hold their positions on the west bank of the Siverskyi Donets River in northern Kharkiv—rather than withdrawing across the river to use it as a defensive position—to prevent any further Ukrainian advances to the north or the east that could threaten Russian lines of communication to the Izyum axis.[1] Ukrainian sources additionally confirmed previous Russian-claimed advances around Popasna, and Russian forces likely seek to open a new line of advance north from Popasna to complete the encirclement of Severodonetsk while simultaneously driving west toward Bakhmut, though Russian forces are unlikely to be able to fully resource both lines of advance simultaneously. 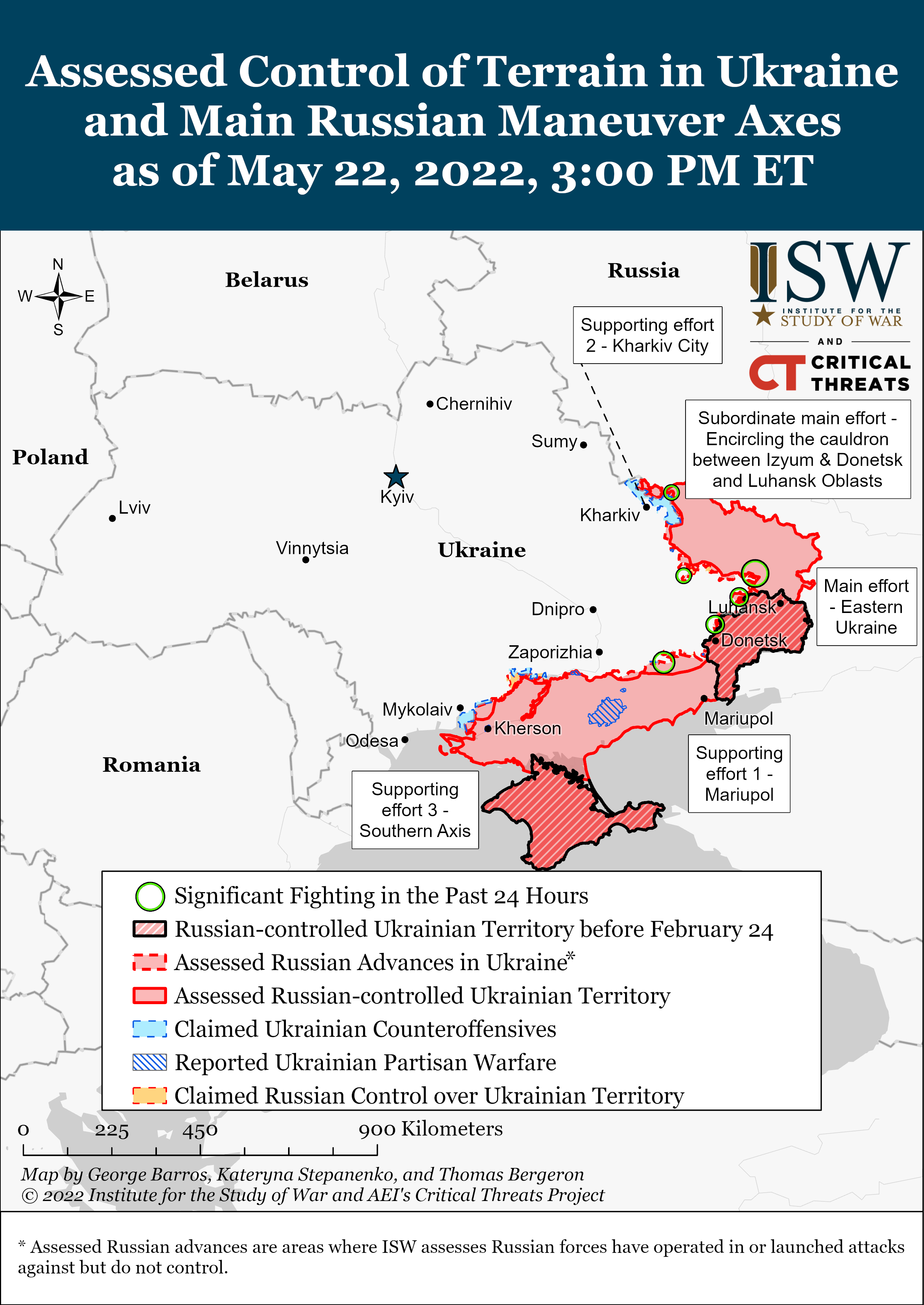 ISW has updated its assessment of the four primary efforts Russian forces are engaged in at this time.  We have stopped coverage of supporting effort 4, “Sumy and northeastern Ukraine,” because it is no longer an active effort:

Russian forces continued to prepare to resume offensive operations southeast of Izyum but did not make any confirmed advances on May 22.[2] The Ukrainian General Staff noted that Russian forces around Izyum are creating conditions to resume offensive actions toward Slovyansk.[3] Russian troops shelled frontline settlements to the southeast and southwest of Izyum, indicating continued Russian plans to move southward from Izyum toward the Donetsk Oblast administrative border.[4] 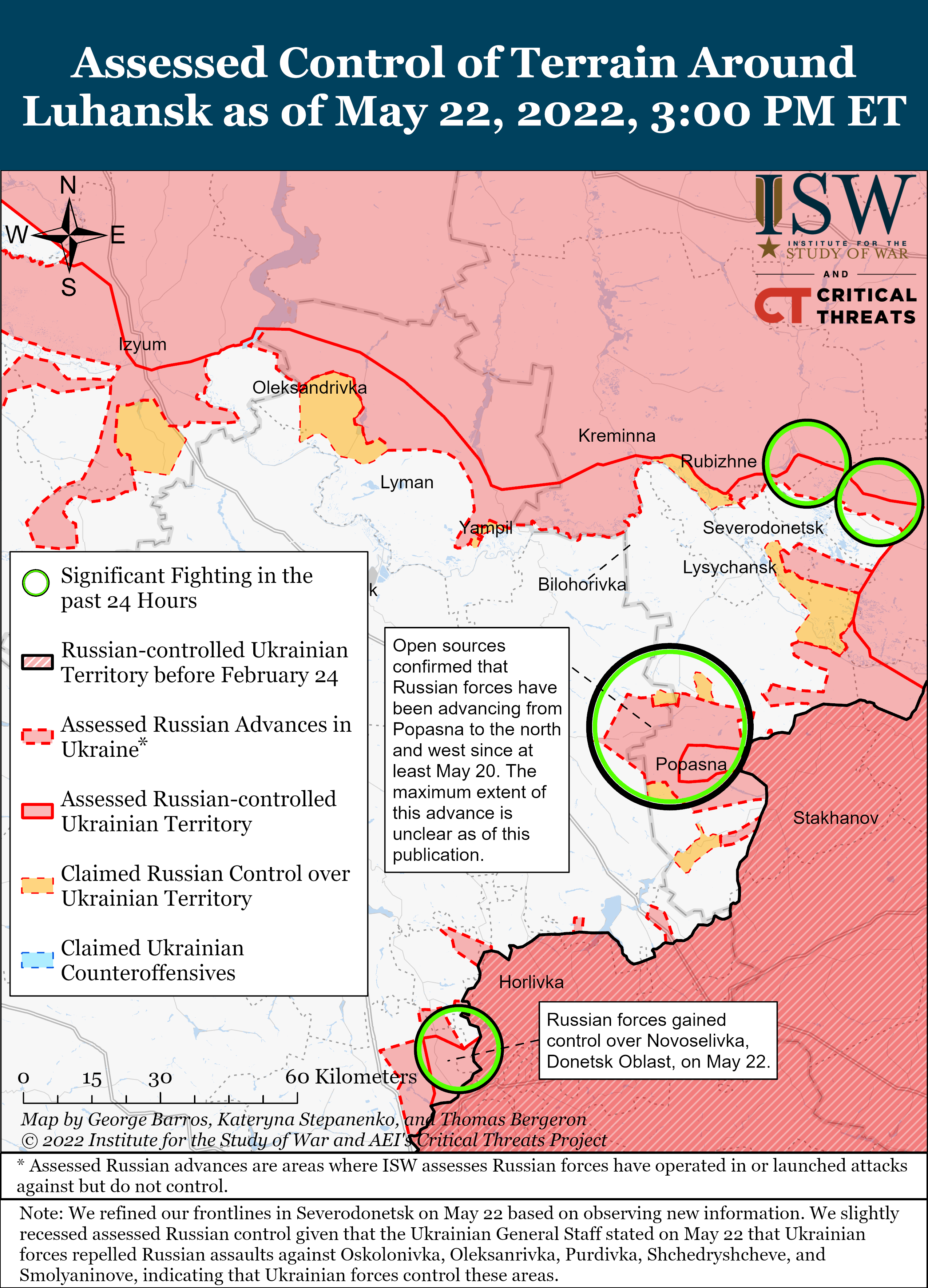 Russian forces continued ground assaults around Severodonetsk but did not make any confirmed advances in this area on May 22.[5] The Ukrainian General Staff reported that Russian troops conducted unsuccessful offensive operations around Oskolonivka, Purdivka, Schedryshcheve, and Smolyianinove, all settlements to the east of Severodonetsk.[6] These offensive operations are likely meant to encircle Severodonetsk from the east, supporting previous advances towards the city from the north (via Rubizhne), west (via Bilohorivka), and south (via Popasna). Ukrainian sources additionally confirmed Russian claims that ISW was previously unable to verify that Russian troops have secured limited advances north and west of Popasna since at least May 20.[7] The Ukrainian General Staff confirmed that fighting is ongoing in the area of Toshkivka, Komyshuvakha, Trypillya, and Vasylivka—all settlements around Popasna where Russian sources claimed to have broken through Ukrainian defenses on May 21, though ISW cannot confirm if Russian forces have fully captured any of these locations.[8] Geolocated combat footage from Volodymirivka, just west of Popasna, further corroborates these claims.[9] Russian forces attacking out of Popasna in several directions likely seek to both complete the encirclement of Severodonetsk from the south and push westward in Donetsk Oblast toward Bakhmut via Trypillya, Lypove, and Vasylivka.[10]

Russian forces continued artillery attacks around Lyman on May 22 but did not make any confirmed ground advances in the area.[11] Militia forces of the Donetsk People’s Republic claimed that they took control of Novoselivka, a village in southern Donetsk Oblast.[12] 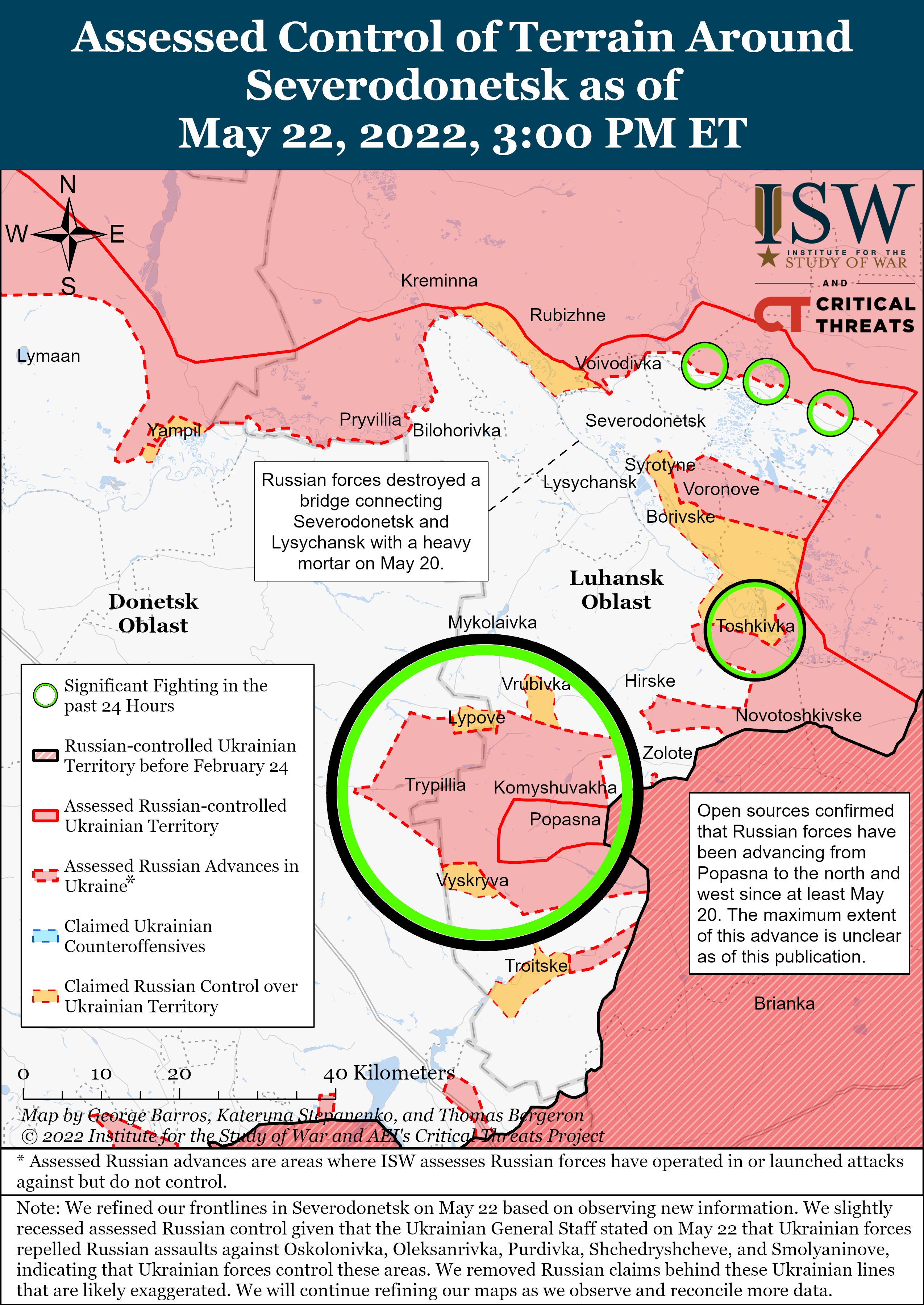 Russian forces continued clearing the territory of the Azovstal Steel Plant on May 22.[13] Occupation forces in Mariupol continued carrying out strict filtration and deportation procedures. The Territorial Defense Headquarters of the Donetsk People’s Republic (DNR) claimed that 313 people, including 55 children, were deported from Mariupol to a filtration camp in Bezymmene.[14] Advisor to the Mayor of Mariupol Petro Andryushenko claimed that 70 people, including 12 children, were forcibly deported to Russia from Mariupol via the Nikolske filtration camp, although ISW cannot independently verify this claim.[15] Andryushchenko additionally stated that the occupation administration has tightened movement controls through the city of Mariupol, which is consistent with ISW’s earlier assessments that the information environment in Mariupol will become increasingly restricted in the coming weeks.[16]

Russian forces focused on maintaining their positions north of Kharkiv City and shelled Ukrainian positions on May 22.[17] The Ukrainian General Staff reported that elements of the Russian 6th Combined Arms Army and Baltic Fleet are fighting to prevent Ukrainian troops from reaching the international border.[18] The Internal Ministry of the Luhansk People’s Republic (LNR) additionally stated that its personnel are operating in the towns of Kozacha Lopan and Rubizhne (the Rubizhne in Kharkiv Oblast, not Luhansk Oblast), confirming ISW’s previous assessment that Russian forces retook some territory on May 19 that was previously captured by Ukrainian forces.[19] Russian forces continued to inflict artillery damage on settlements around Kharkiv City.[20] 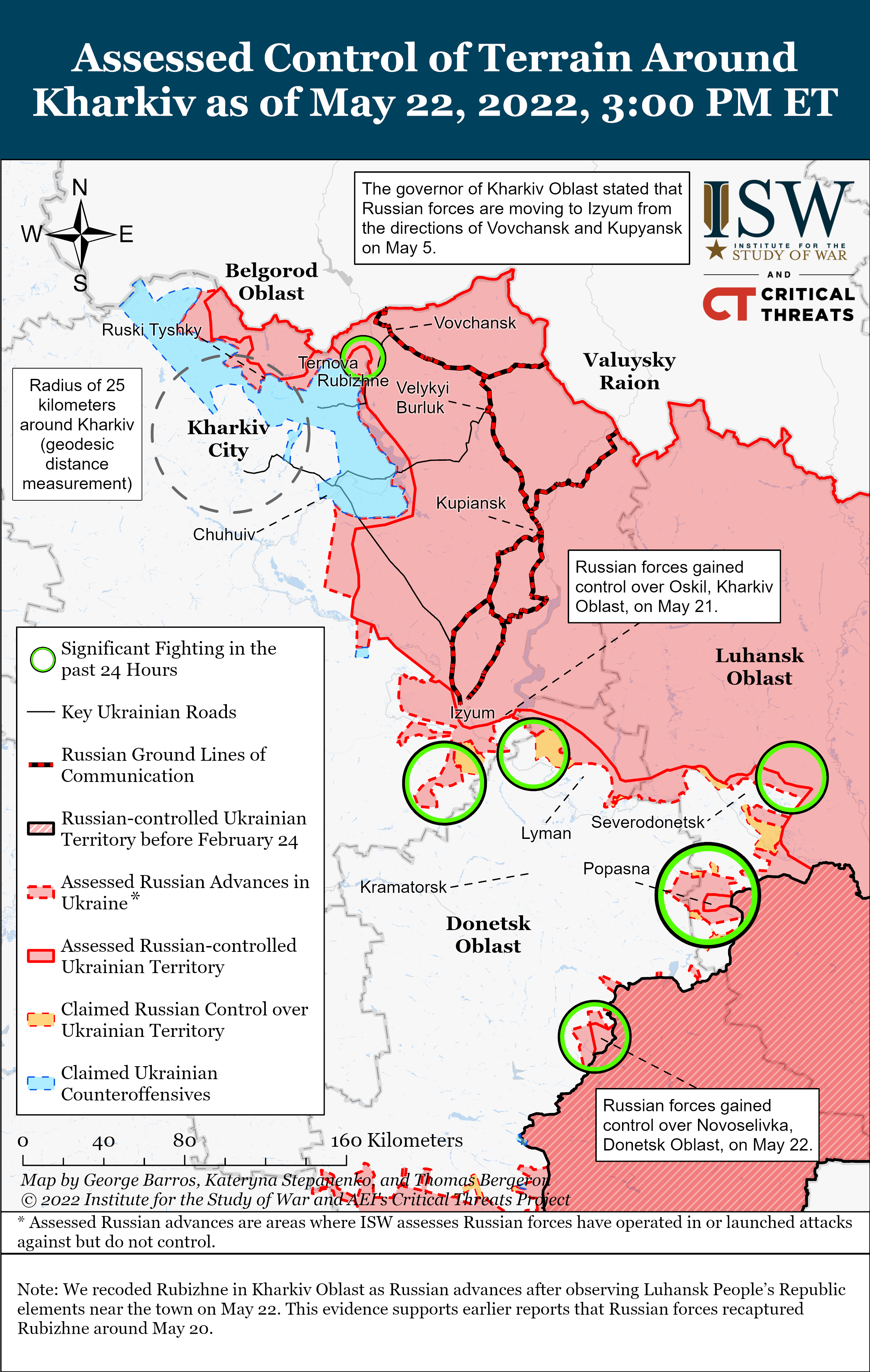 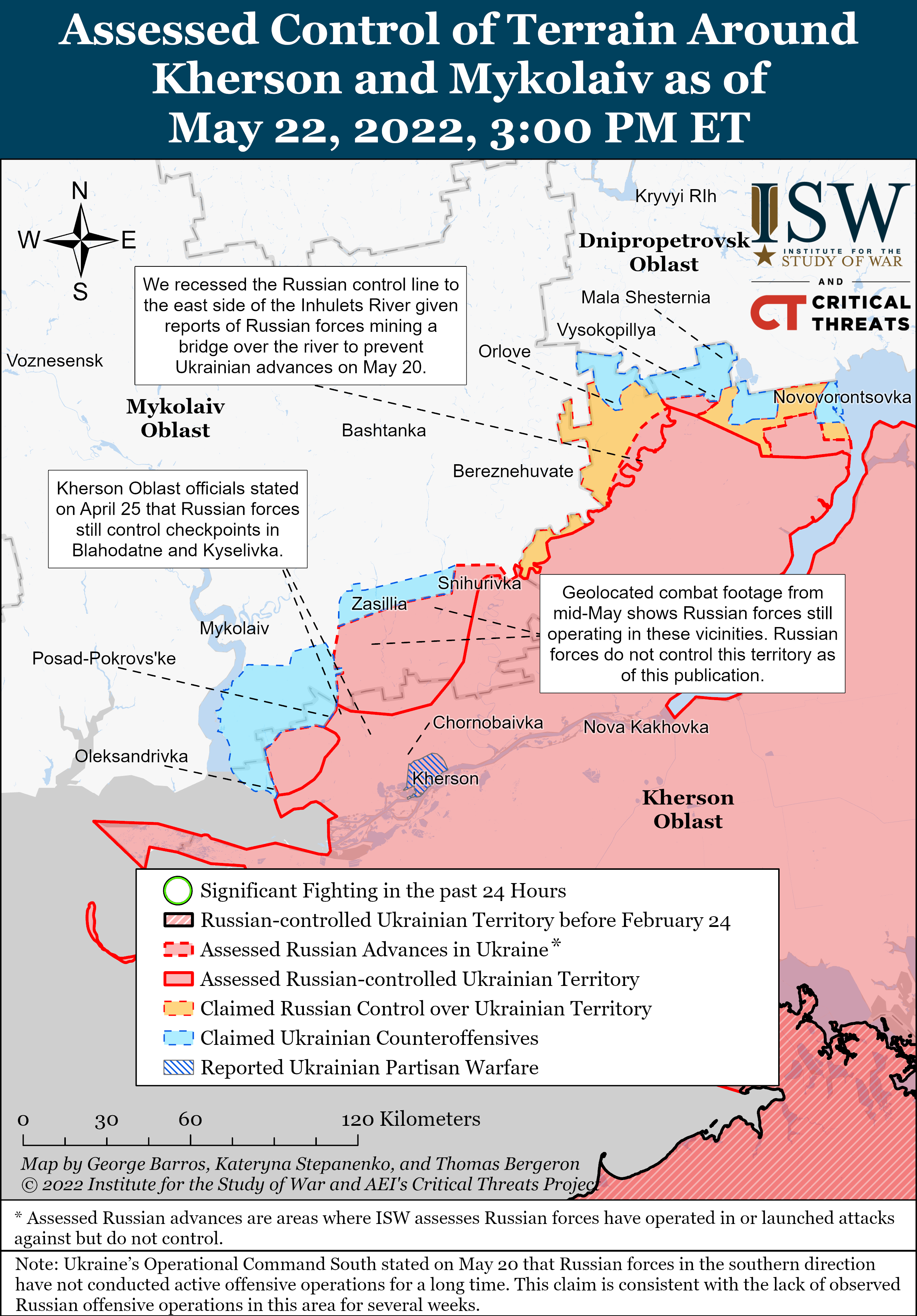