Russian nationalist figures are increasingly criticizing the failures of Russia’s “special military operation” in Ukraine and are calling for further mobilization that the Kremlin likely remains unwilling and unable to pursue in the short term. The All-Russian Officers Assembly, an independent pro-Russian veterans’ association that seeks to reform Russian military strategy, called for Russian President Vladimir Putin and the Kremlin to declare war on Ukraine and introduce partial mobilization in Russia on May 19.[1] The Assembly said that Russia’s “special military operation” failed to achieve its goals in three months, especially after the failed Siverskyi Donets River crossings. ISW previously assessed that the destruction of nearly an entire Russian battalion tactical group (BTG) during a failed river crossing on May 11 shocked Russian military observers and prompted them to question Russian competence.[2] The Assembly’s appeal called on Putin to recognize that Russian forces are no longer only “denazifying” Ukraine but are fighting a war for Russia’s historic territories and existence in the world order. The officers demanded that the Kremlin mobilize all regions bordering NATO countries (including Ukraine), form territorial defense squads, extend standard military service terms from one year to two, and form new supreme wartime administrations over Russia, the Donetsk and Luhansk People’s Republics (DNR and LNR), and newly occupied Ukrainian settlements. The officers also demanded the death penalty for deserters.

The Assembly’s letter may be a leading indicator of elements of the Russian government and society setting informational conditions to declare partial mobilization. However, the Kremlin has so far declined to take this step likely due to concerns over domestic backlash and flaws in Russia’s mobilization systems.[3] The All-Russian Officers Assembly called on Putin to recognize the independence of the DNR and LNR three weeks prior to the Russian invasion of Ukraine, setting conditions for the Russian “special military operation.”[4] Russian Defense Minister Sergey Shoigu announced on May 20 that Russia will form 12 new Western Military District units (of unspecified echelon) before the end of the year in response to NATO expansion.[5] Russian forces may intend to man these units with newly mobilized personnel, as it is unclear how else the Kremlin could generate the manpower for new units. The Ukrainian General Staff also reported that Russian forces are withdrawing old T-62 tanks from storage to form new BTGs.[6] Russia is likely continuing to exhaust its remaining combat-ready reserves to maintain the momentum of the Battle of Severodonetsk, rather than prioritizing preparations for new reinforcements. ISW previously assessed that Russian mobilization is unlikely to generate combat-ready force due to hasty training.[7]

More Russians supportive of the Kremlin and the Russian invasion of Ukraine are beginning to criticize the Kremlin openly. Russian milbloggers claimed that the Kremlin will not honor the Officers Assembly appeal, indicating an intensifying negative perception of the Russian leadership among Russians supportive of the war in Ukraine.[8] Kaliningrad Oblast Governor Anton Alikhanov publicly stated that the Russian war in Ukraine has disrupted transport routes and construction schedules in the region, a rare admission of the economic cost of the war from a Russian government official.[9] The Ukrainian General Staff also reported that Russian military personnel are increasingly complaining about the ineffectiveness of offensive operations against Ukrainian troops.[10]

The UK Ministry of Defense reported that Russia has suffered a similar death toll within the first three months of the invasion of Ukraine as was experienced by the Soviet Union over the course of nine years in Afghanistan.[14] The British Ministry of Defense stated that a combination of poor low-level tactics, poor air defense, lack of operational flexibility, and poor command methods have resulted in repeated mistakes and failures, which are continuing to be evident in Donbas. The report noted that the Russian public is sensitive to high casualty numbers, and assessed that as casualties suffered in Ukraine grow and become harder to conceal, public dissatisfaction will increase. 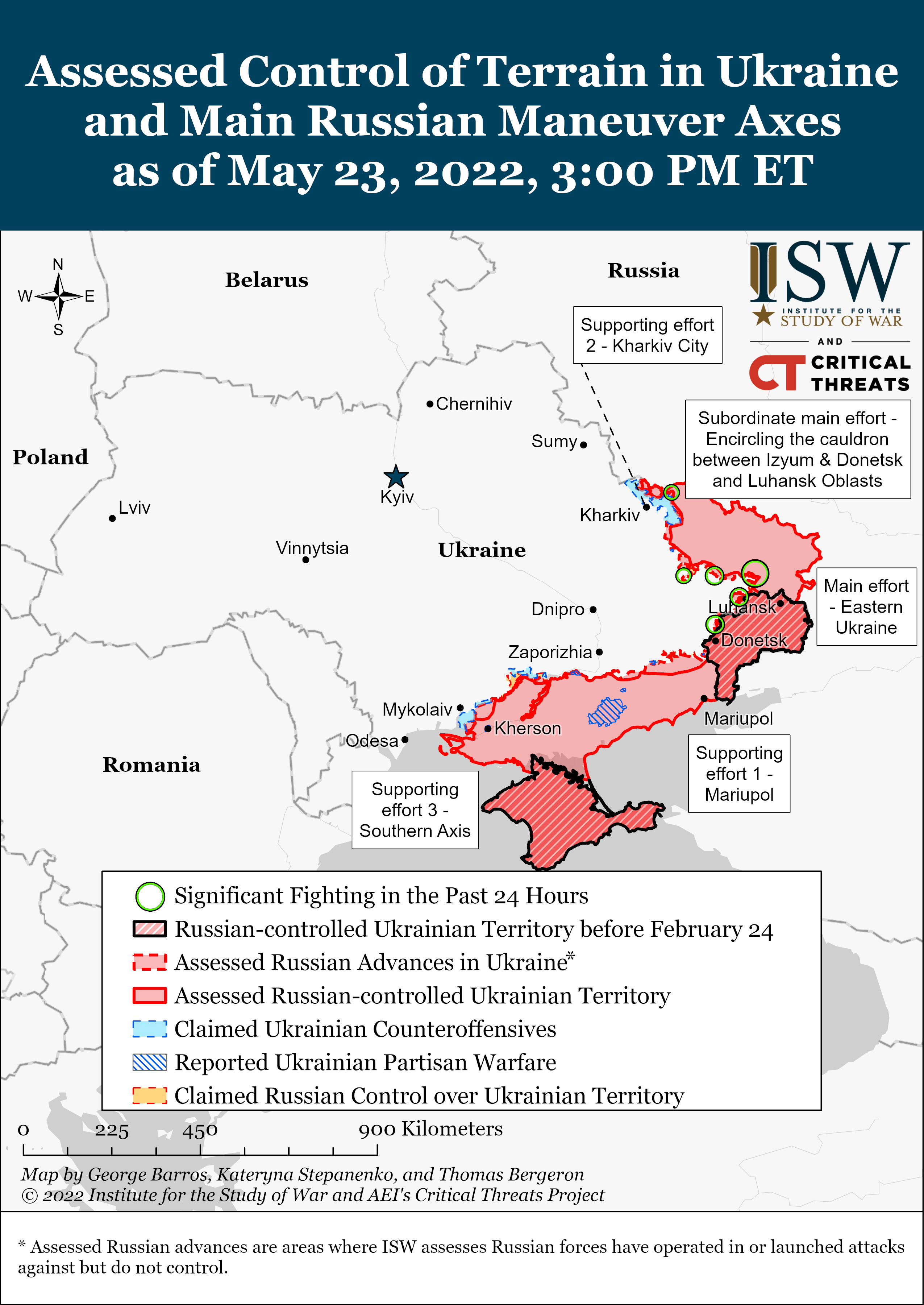 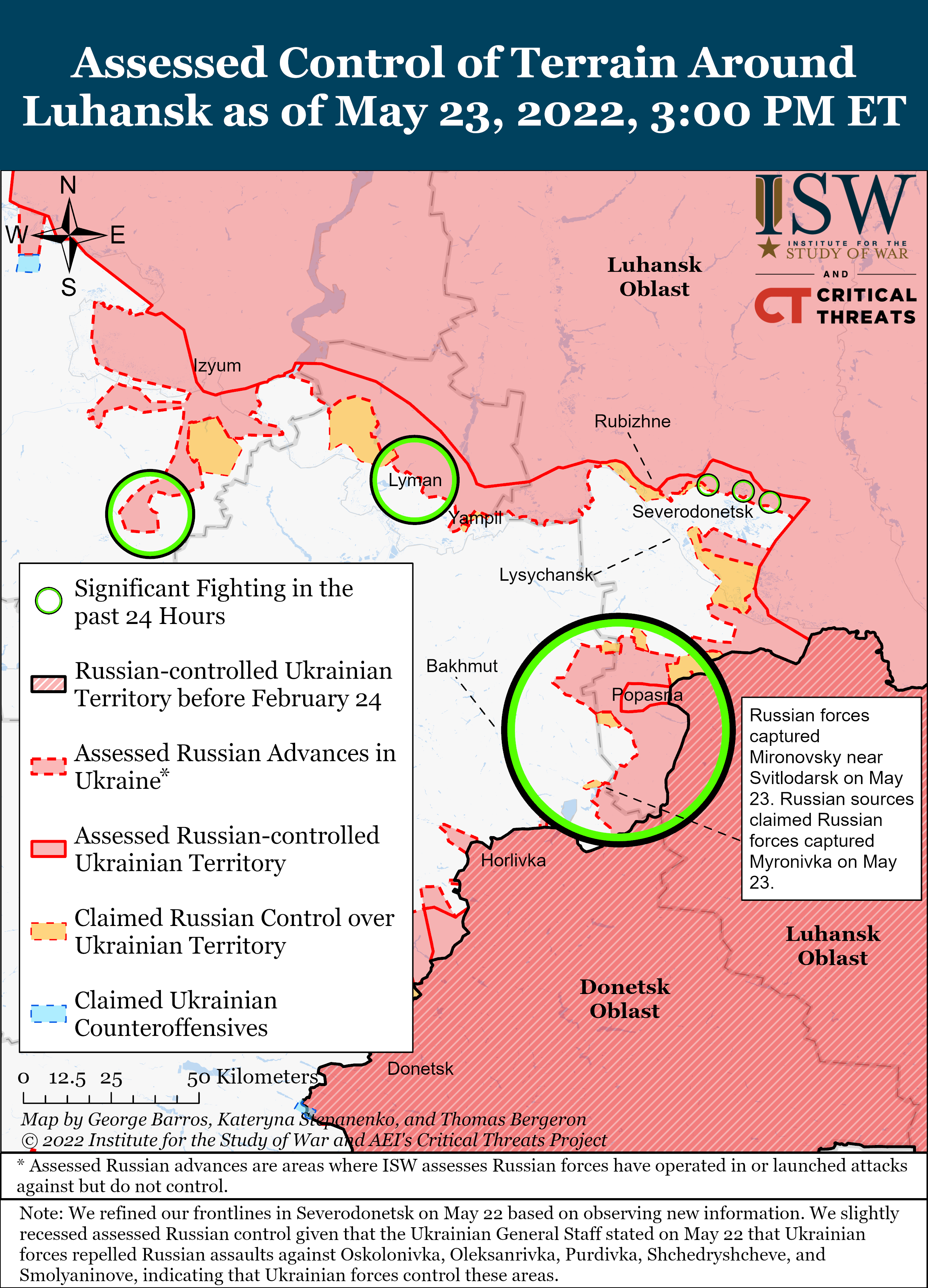 Russian forces continued ground assaults around Severodonetsk and made marginal gains to encircle the city on May 23.[19] Russian sources claimed that Russian troops cleared the settlement of Shchedryshcheve, directly northeast of Severodonetsk, and are fighting on the outskirts of the city.[20] Russian forces reportedly stormed Zolote and took control of the entry points to the city, which would allow them to push northward and complete the encirclement of Severodonetsk from the south.[21] The Ukrainian Defense Ministry reported that Russian forces are attempting to break through Ukrainian defenses around Popasna, specifically around Toshkivka, Komyshuvakha, Nyrkove, Vasylivka, Nova Kamyanka, and Myronivsky, in a likely attempt to push westward toward Bakhmut.[22] Ukrainian forces reportedly withdrew westward from Volodymyrivka to Soledar, indicating that Russian forces are advancing westward from Popasna, as opposed to prioritizing a northward push toward Severodonetsk.[23] Russian forces additionally made gains near the Donetsk-Luhansk administrative border and took control of Mironovsky, southeast of Bakhmut.[24] The capture of Mironovsky will enable further attempts to drive toward Bakhmut from both the south and west. However, Russian forces are unlikely to be able to capture Bakhmut quickly (if at all) based on their past performance in urban terrain in eastern Ukraine.

Russian forces intensified offensive operations around Lyman and Avdiivka and made gains on May 23. Unconfirmed reports suggest that Russian forces have launched an assault on the northern part of Lyman and have taken at least partial control of the city as of May 23.[25] Russian forces additionally intensified artillery strikes against Avdiivka and are likely taking advantage of their previous capture of Novoselivka in order to advance on Avdiivka and gain highway access toward Slovyansk.[26] 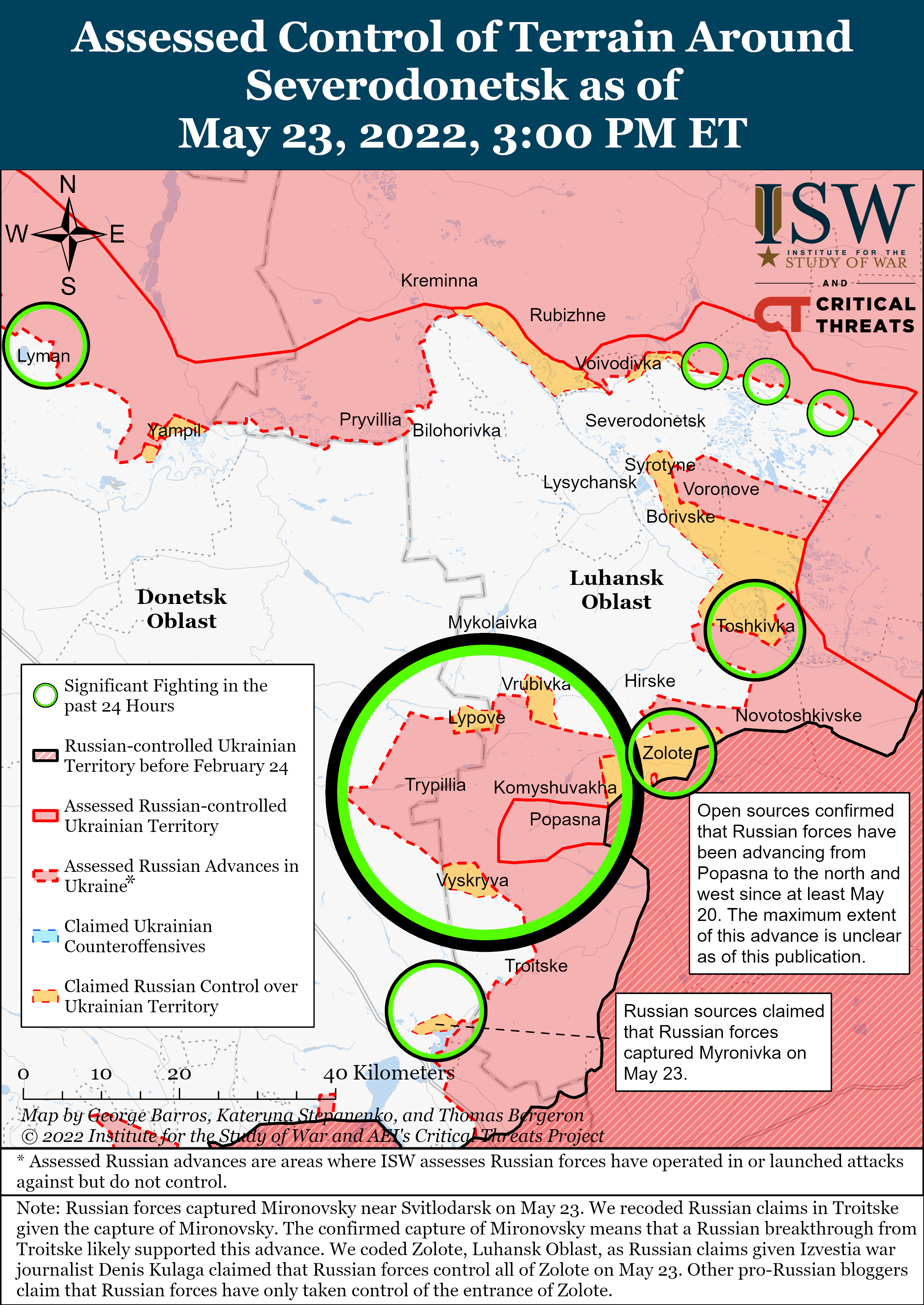 Russian defense officials stated that Russian and proxy forces continued to demine the Azovstal Steel Plant on May 23.[27] Russian military Telegram bloggers criticized a video of Russian servicemen reportedly carrying out ground assaults on Azovstal on May 22 and stated that they should have waited for the remaining Ukrainian forces to surrender.[28] Russian milbloggers said that Russian forces did not attempt further assaults on May 23, but suggested that Russian military commanders continue to disregard servicemen’s lives in favor of the total capture of the Azovstal plant. ISW cannot independently confirm the number of remaining Ukrainian defenders in Azovstal. Donetsk People’s Republic (DNR) Head Denis Pushilin claimed that Ukrainian defenders who already surrendered are awaiting trials in detention centers in occupied Donetsk Oblast.[29]

Russian national (as opposed to DNR proxy) occupation authorities continued to strengthen their bureaucratic control over Mariupol, signaling a shift away from administrative control by DNR forces. Mariupol Mayor’s Advisor Petro Andryushenko reported that “volunteers” from Russia are assisting filtration efforts and Chechen units are patrolling highways from Mariupol into the Ukrainian-controlled areas of Zaporizhia Oblast.[30]

Russian forces focused on maintaining their positions north of Kharkiv City on May 23.[31] The Ukrainian Defense Ministry noted that unspecified elements of the Russian 6th and 41st Combined Arms Armies, Baltic Fleet, and (for the first time) the 1st and 2nd Army Corps are operating in the area to prevent Ukrainian troops from further advances.[32] The 1st and 2nd Army Corps are the armed forces of the Donetsk and Luhansk People’s Republics, respectively. The redeployment of DNR and LNR troops away from their previous positions conducting frontal assaults in eastern Ukraine to northern Kharkiv to hold defensive lines against the Ukrainian counteroffensive indicates Russia’s prioritization of slowing the Ukrainian counteroffensive, at the cost of reinforcing Russian offensive operations in the east. A pro-Russian source reported that Russian forces are still fighting in Lytpsi and Rubizhne (in Kharkiv Oblast, not Luhansk Oblast), which is consistent with previous claims that Russian troops were able to regain some ground to the north of Kharkiv City.[33] Russian forces continued to shell Kharkiv City and its environs throughout May 23.[34] 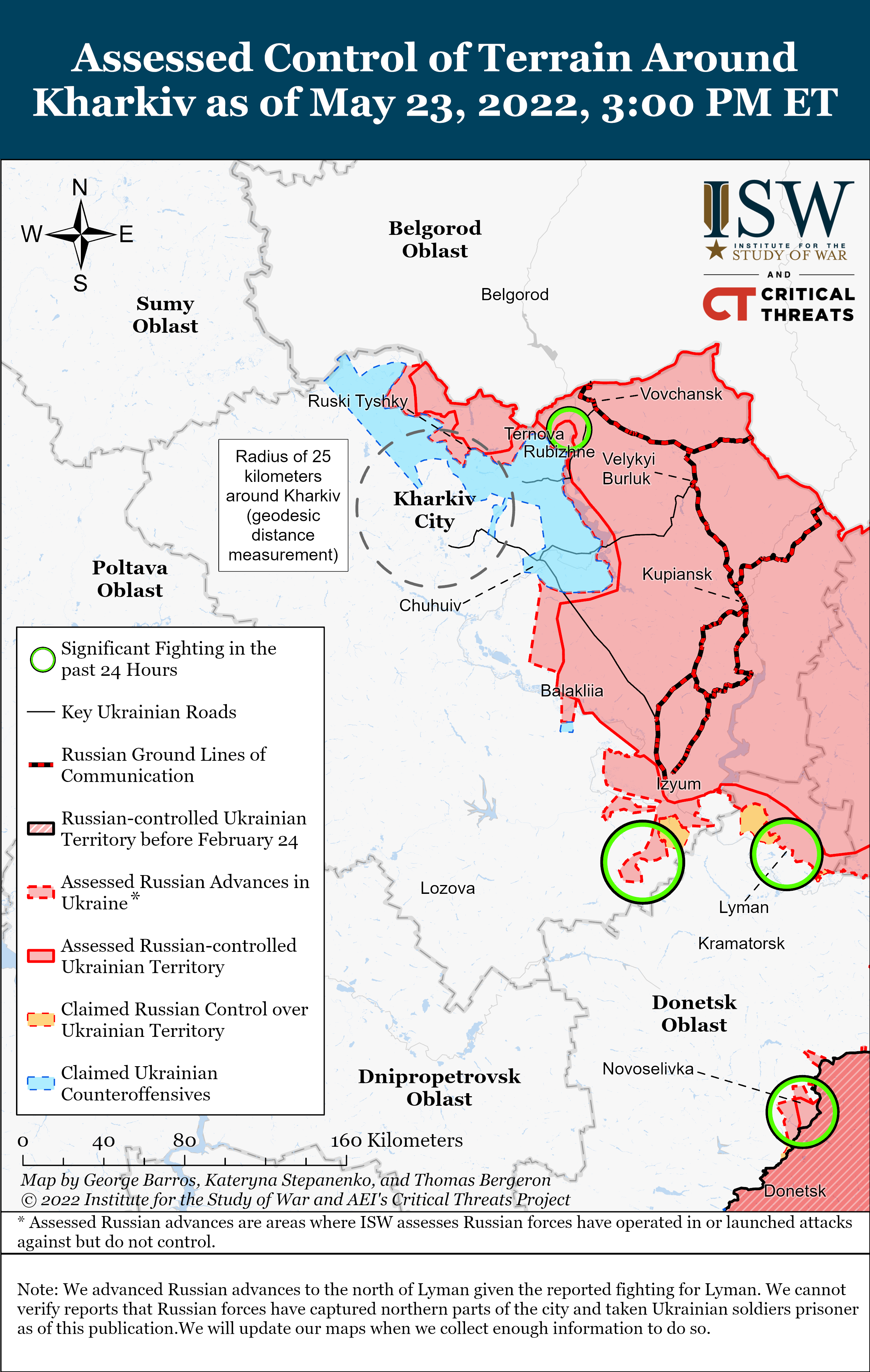 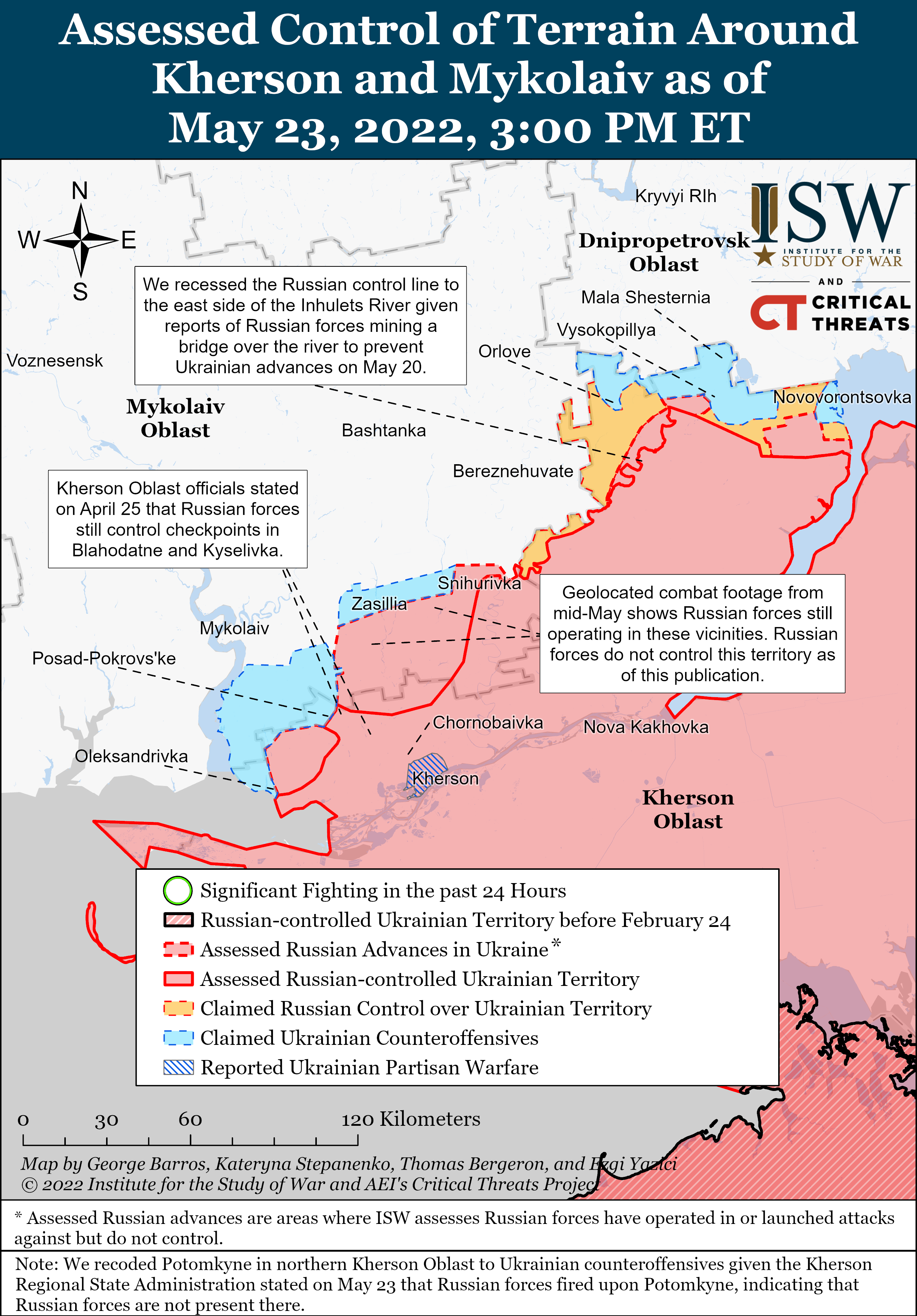