Russian forces reportedly entered the Azovstal Steel Plant – rather than its outskirts – for the first time on May 4. The extent of this Russian advance remains unclear, and Russian forces likely face further costly fighting if they intend to clear the entire facility. The Kremlin likely hopes that the successful capture of Azovstal through a ground assault will cement the Kremlin’s growing effort to claim complete control of Mariupol by May 9, with Russian propagandists recently arriving in the city to set conditions for further claims of a Russian victory. The Kremlin likely intends to claim some sort of victory in Mariupol to present a success to the Russian people, though Russian forces are highly unlikely to halt offensive operations across Ukraine on this date.

Russian forces intensified airstrikes against transportation infrastructure in Western Ukraine on May 4 but remain unable to interdict Western aid shipments to Ukraine. Six Russian cruise missiles hit electrical substations near railway stations in Lviv and Transcarpathia (the southwestern Oblast of Ukraine) on May 4.[1] A senior US defense official reported that Russian aircraft conducted 200 to 300 airstrikes largely targeting transportation infrastructure in the last 24 hours.[2] The US official added that these Russian strikes are likely intended to disrupt Ukrainian transportation capabilities and slow down weapon re-supply efforts but have been unable to do so.[3] 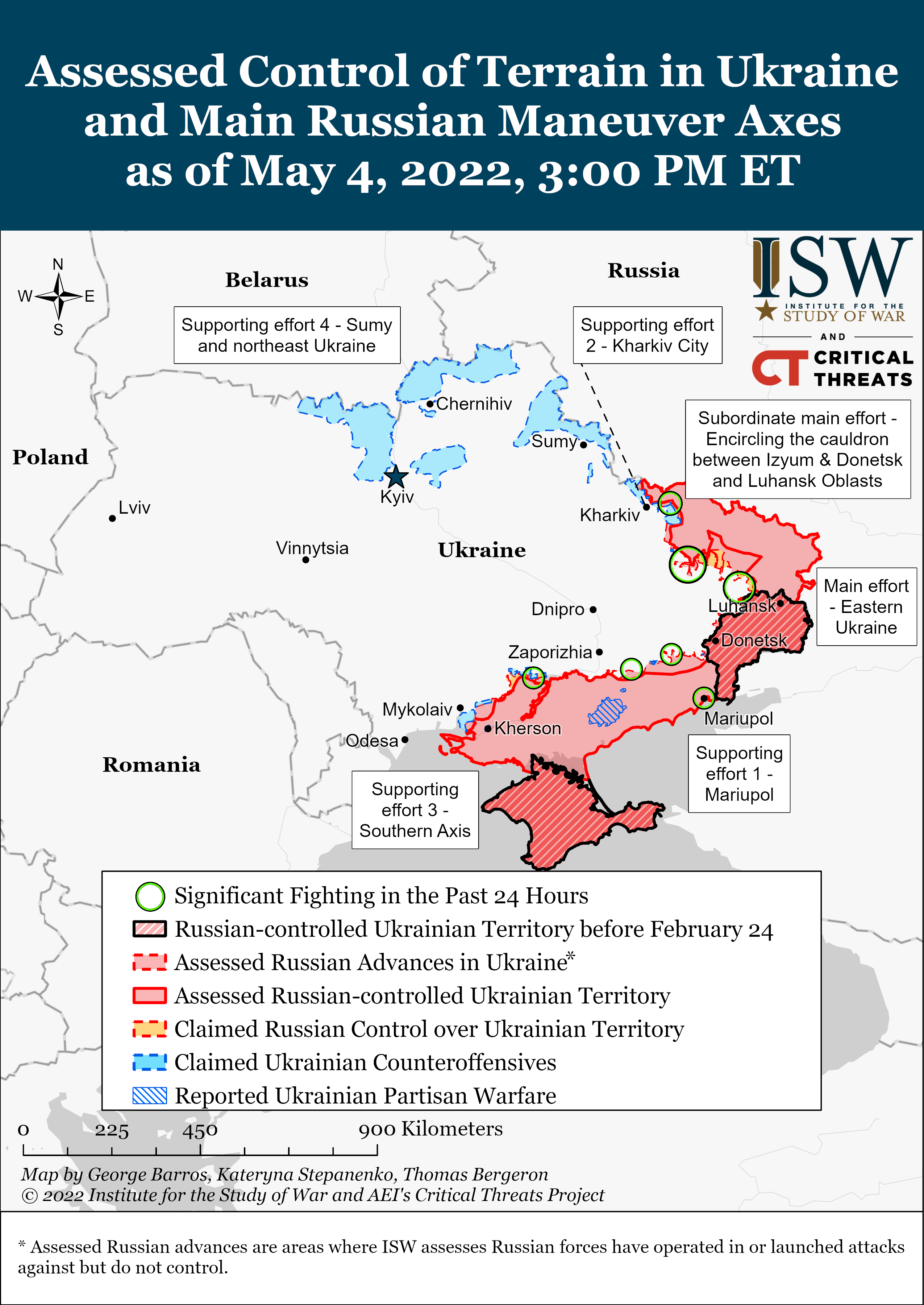 ISW has updated the structure of its discussion of the primary efforts Russian forces are currently engaging in. The main Russian effort is concentrated in Eastern Ukraine and includes one subordinate main effort and four supporting efforts.  The subordinate main effort is the encirclement of Ukrainian troops in the cauldron formed between the Izyum-Slovyansk highway and the Kreminna-Rubizhne-Popasna frontline in Luhansk. The four supporting efforts are: completing the seizure of Mariupol, Kharkiv City, the Southern Axis, and threatening northeastern Ukraine from Russian and Belarusian territory.

Russian forces launched several unsuccessful assaults in eastern Ukraine in the last 24 hours but did not advance overall efforts to encircle Ukrainian forces along the frontline around Rubizhne.[4] An unnamed senior US defense official stated that Russian forces are attempting to advance in the Izyum area southeastward towards Lyman, Slovyansk, and Kramatorsk and in an effort to encircle Ukrainian defenses from the south.[5] The official noted that Ukrainian resistance has “stalled” Russian advances in this area and that Russian operations remain uneven.[6]

Ukrainian forces continued to threaten Russian ground lines of communication to Izyum along the E40 highway, destroying a Russian supply convoy in Vesele on May 3.[7] Russian forces heavily shelled Ukrainian positions south and west of Izyum and likely targeted a Ukrainian pontoon bridge across the Siverskyi Donets in Protopoivka.[8] The Russian Defense Ministry claimed that Russian forces destroyed the bridge on May 4, but ISW cannot independently confirm this claim.[9]

The Ukrainian General Staff reported that Russian forces are attacking south towards Lyman from northeastern Luhansk Oblast alongside the Izyum effort.[10] Russian forces reportedly made unspecified advances in the direction of Shandryholove, about 15 kilometers north of Lyman.[11] Russian forces are unlikely to have seized Yampil (roughly 10 kilometers southeast of Lyman) as of May 4 based on satellite images of large fires in the area following Russian artillery and missile strikes.[12] 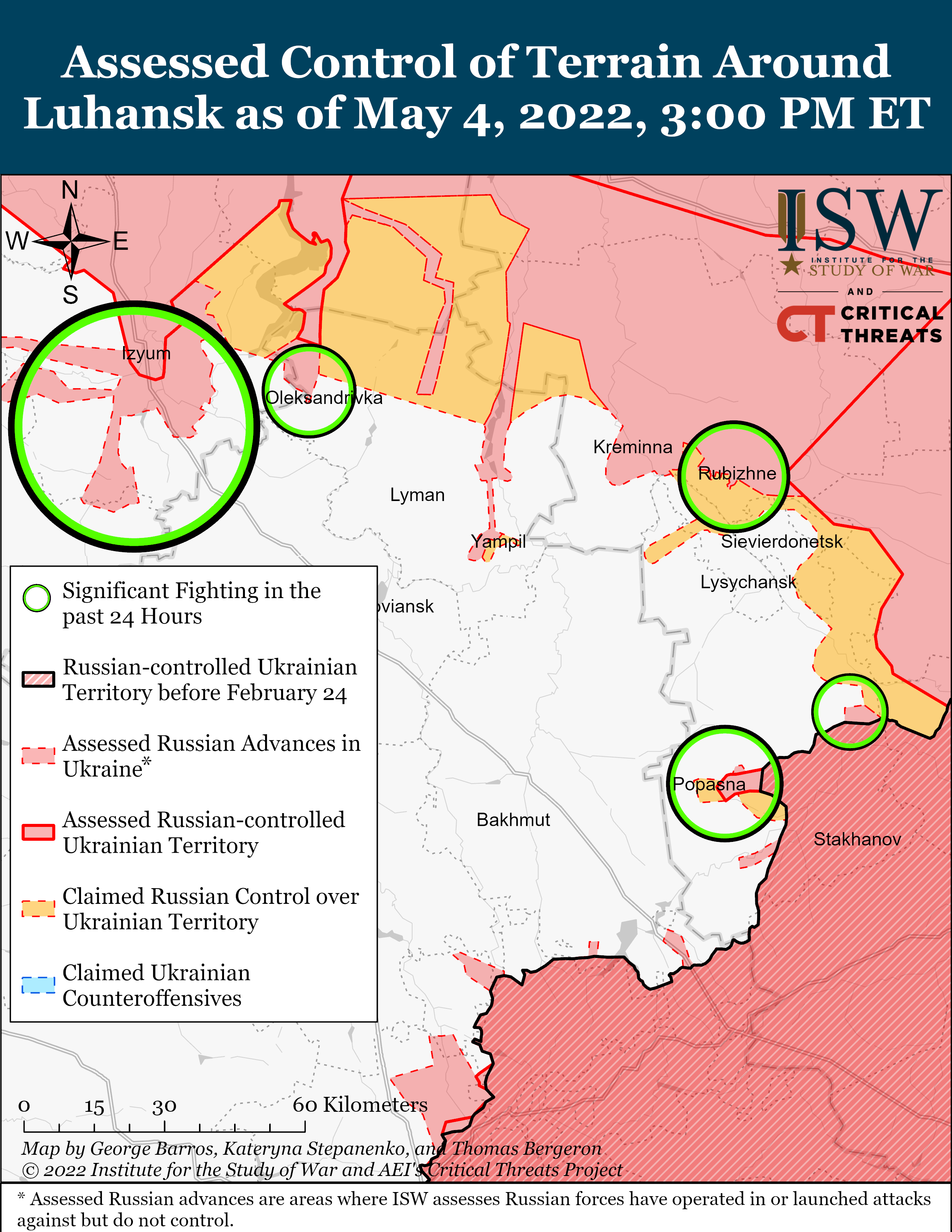 Russian forces reportedly entered the Azovstal Steel Plant for the first time – rather than its outskirts, which they have contested for several weeks – on May 4.[15] Multiple Ukrainian sources stated that Russian troops successfully "broke into”  Azovstal and that the Ukrainian government has lost communications with Ukrainian defenders within the plant as a result.[16] ISW cannot confirm the extent of Russian advances within Azovstal at this time but will continue to provide updates as the situation unfolds.

An unnamed senior US defense official estimated that 2 Russian battalion tactical groups (BTGs) ”cobbled together” from various damaged units and unspecified Chechen units, amounting to about 2,000 personnel, remain in Mariupol as of May 4.[17] The 10 damaged BTGs that have previously redeployed from Mariupol are reportedly still undergoing rest and refit and have not been committed to offensive operations in eastern Ukraine.[18] This report is consistent with ISW’s previous assessment that most Russian forces have left Mariupol, leaving smaller elements to finish capturing Azovstal.[19]

Russian forces continue to consolidate their administrative control of Mariupol. The Ukrainian Main Intelligence Directorate (GUR) reported that Russian preparations for a “Victory Day” parade in Mariupol on May 9 are ongoing.  These preparations reportedly include forcing residents to clear damaged streets in return for food and preparing materials to portray a Russian “liberation” of Mariupol.[20] The GUR noted that First Deputy Head of the Russian Presidential Administration Sergey Kiriyenko arrived in Mariupol on an unspecified date to oversee preparations in his new position as Kremlin-appointed curator for Donbas issues. Kiriyenko’s activities in Mariupol are consistent with previous assessments that the Kremlin intends to make Mariupol the focal point of a possible Russian declaration of some sort of victory on May 9, though Russian forces will continue offensive operations beyond this date regardless of any Kremlin claims. 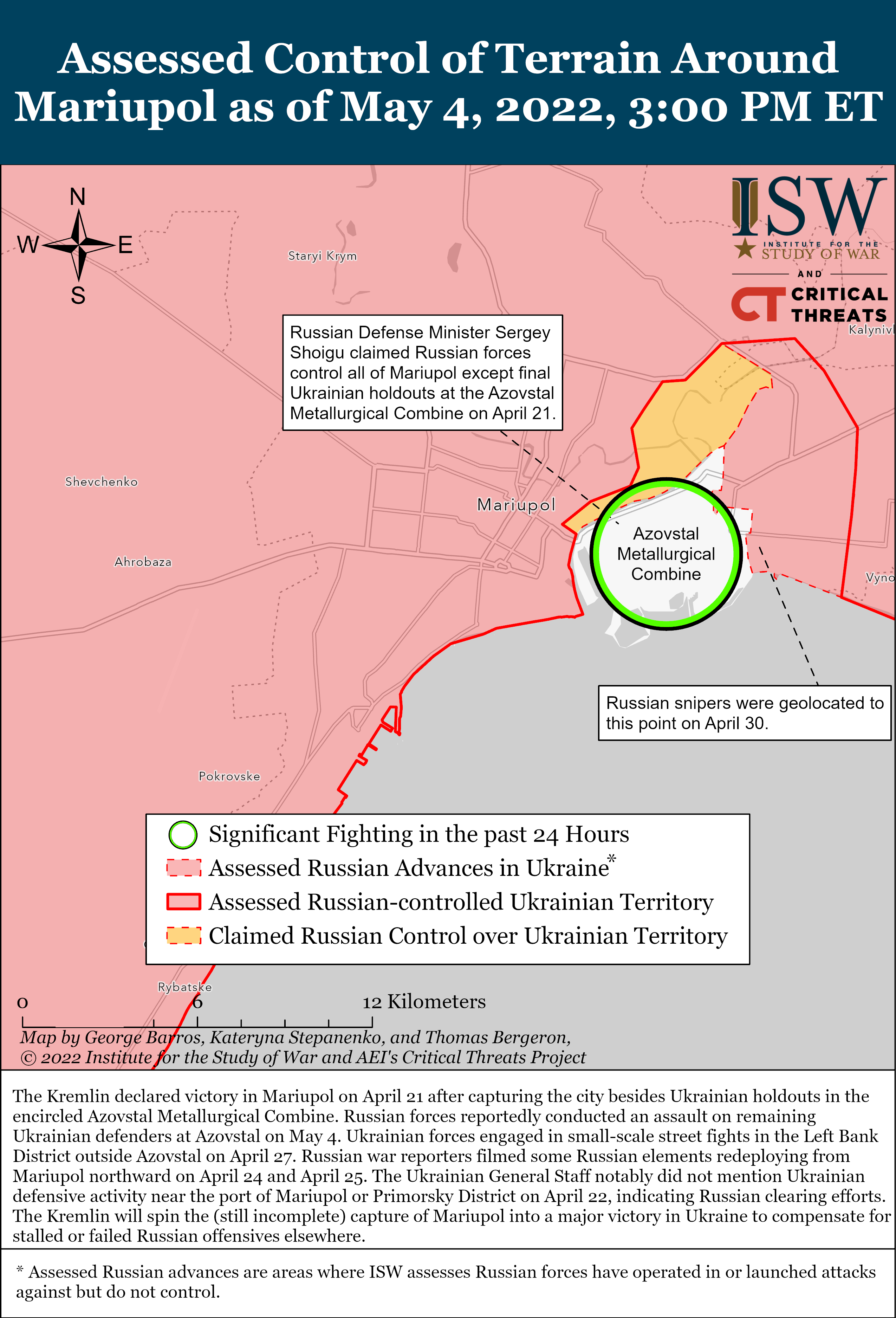 Russian forces continued to reconnoiter and conduct air and artillery strikes on Ukrainian positions in Kharkiv City and surrounding settlements on May 4.[21] Ukrainian forces did not conduct any confirmed counterattacks in the last 24 hours. However, additional Russian and Ukrainian sources notably confirmed the extent of the previously-reported Ukrainian counteroffensive that pushed Russian forces 40 kilometers east of Kharkiv to Staryi Saltiv.[22] 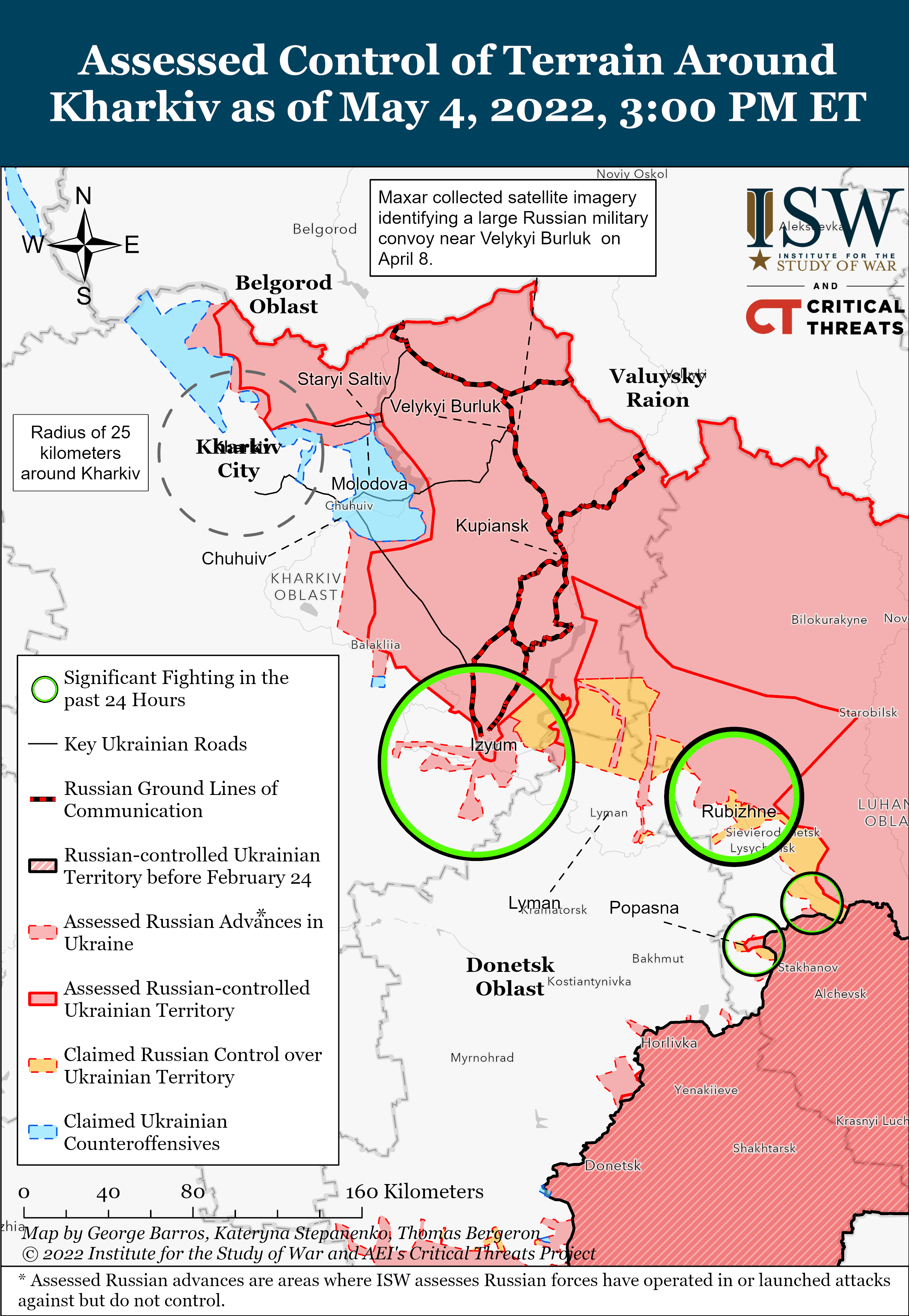 Russian forces conducted an unsuccessful ground offensive in the direction of Zaporizhia City and intensified shelling in Kherson Oblast on May 4.[23] The Ukrainian General Staff noted that Russian forces may intend to conduct additional offensives in Zaporizhia and Kryvyi Rih areas while continuing operations in Donbas.[24] Russian forces attempted unsuccessful assaults on Novosilka, Donetsk Oblast, and Orihiv, Zaporizhia Oblast, likely to push towards the N15 highway running from Donetsk to Zaporizhia City.[25] Ukrainian artillery continued to target Russian supply lines running to occupied Zaporizhia Oblast settlements from Donbas, destroying a Russian convoy on May 4.[26]

Russian forces intensified shelling in southwest and northeast Kherson Oblast on May 4.[27] The Kherson Oblast Administration reported that Russian forces are attempting to launch offensives on Knyazivka, Mala Shestirnya, and Novovoznesenske to gain a foothold in Mykolaiv and Dnepropetrovsk Oblasts.[28] Ukraine's Southern Operational Command South reported reestablishing control over four unspecified villages on the Kherson-Mykolaiv Oblast border likely in the Snihurvika area, but ISW cannot confirm Ukrainian claims or the location of the reportedly liberated villages.[29] 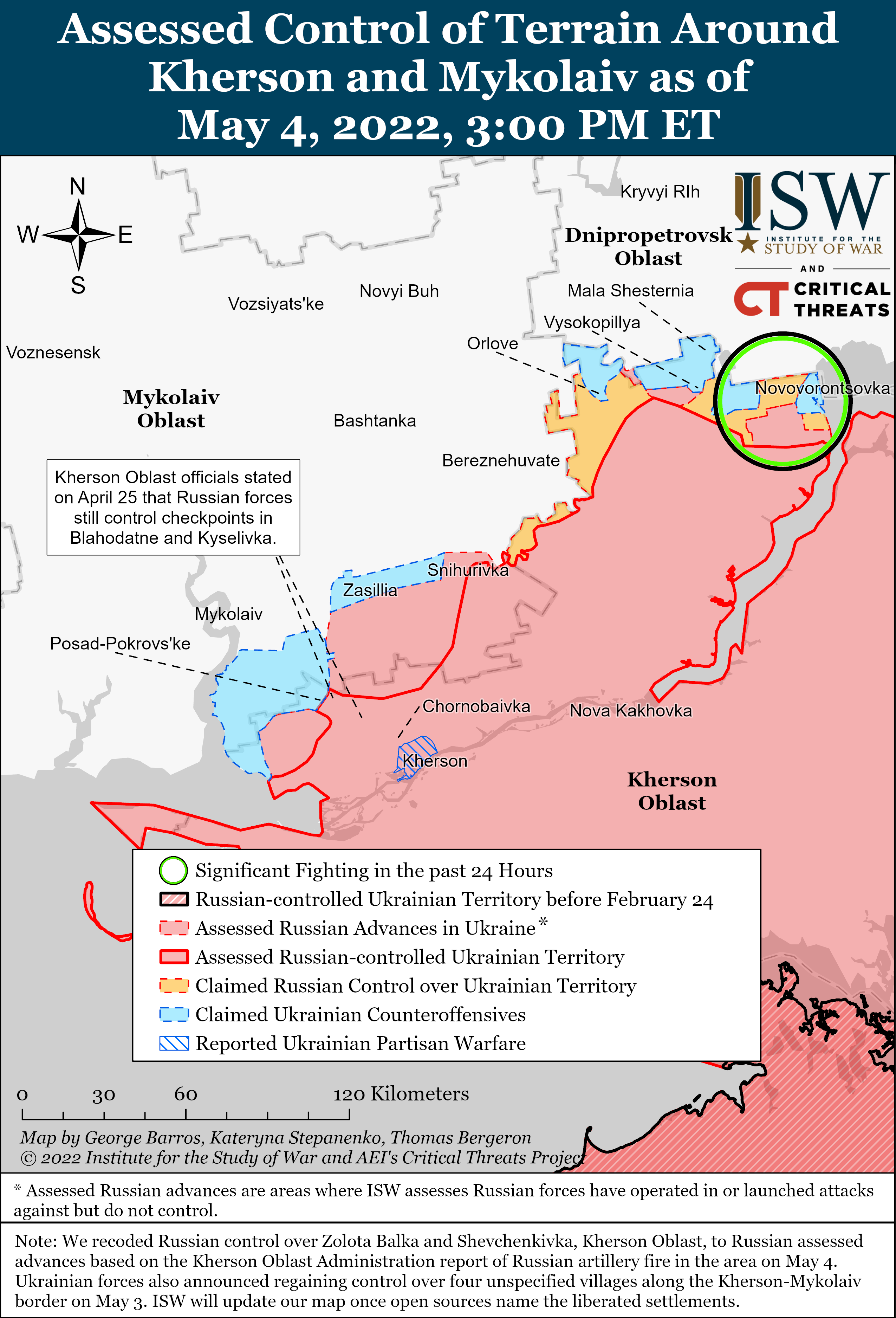 The Ukrainian Main Intelligence Directorate (GUR) said that Russia seeks to use Transnistria to achieve psychological effects pinning Ukrainian forces to keep them from deploying to Donbas.[30] The GUR noted that there are only 300 able-bodied servicemen in the Russian Special Task Force in Transnistria and that they are equipped with old ammunition. The three Russian missile attacks on Odesa on May 3 were likely part of this psychological campaign in addition to targeting unspecified infrastructure.[31] 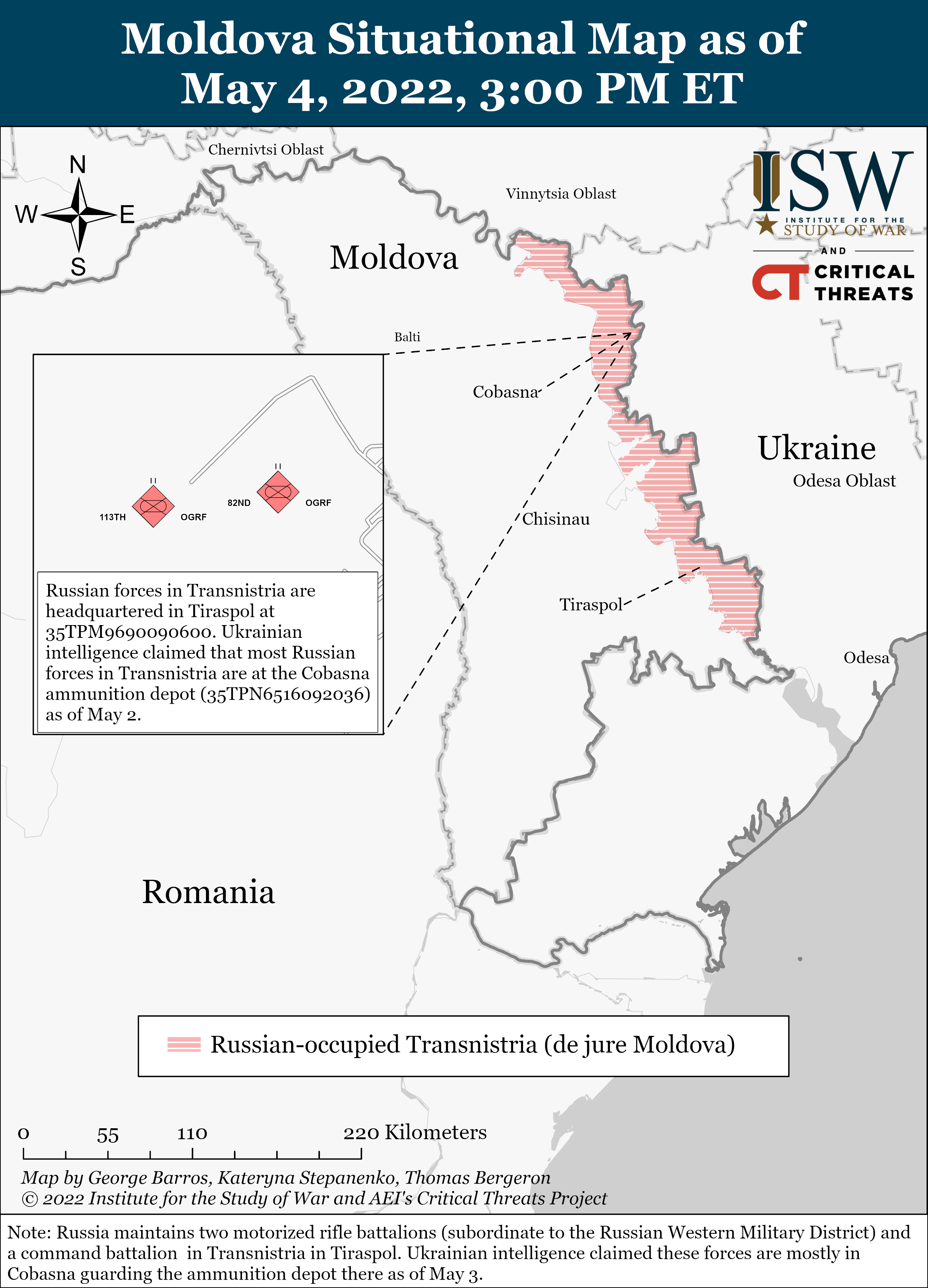 The Belarusian Ministry of Defense announced a “sudden test” of the reaction forces of the Belarusian Armed Forces on May 4.[32] The Belarusian MoD stated that the inspection will test the readiness and overall ability of troops to respond to “crisis situations” and will involve simulated land and air threats. The inspection will reportedly entail significant movement of military vehicles and equipment. The readiness test is unlikely to impact the situation on the northeastern axis in Ukraine, and Belarusian forces remain unlikely to enter the war in Ukraine, but ISW will continue to monitor the situation and provide updates as necessary.