ISW is publishing an abbreviated campaign update today, November 6. This report discusses the recent reduction of nuclear threats by key Kremlin figures and the likely role of Russia’s military leadership and the international community in prompting this change, and the risks of further Russian nuclear saber rattling.

Key Kremlin officials began collectively deescalating their rhetoric regarding the use of nuclear weapons in early November. The Russian Ministry of Foreign Affairs (MFA) released a statement on “the prevention of nuclear war” on November 2, stating that Russia “is strictly and consistently guided by the postulate of the inadmissibility of a nuclear war in which there can be no winners, and which must never be unleashed.” The Russian MFA also stated that it is committed to the reduction and limitation of nuclear weapons.[1] Russian President Vladimir Putin stated on October 27 that Russia has no need to use nuclear weapons against Ukraine and claimed Russia has never discussed the possibility of using nuclear weapons, only “hinting at the statements made by leaders of Western countries.”[2] The deputy chairman of the Russian Security Council, Dmitry Medvedev, has similarly increasingly downplayed the fiery nuclear rhetoric he used throughout October and is now focusing on promoting Russian unity in the war in Ukraine.[3]

Putin and key Kremlin officials had increased their references to the use of nuclear weapons from Putin’s September 30 annexation speech and throughout October, likely to pressure Ukraine into negotiations and to reduce Western support for Kyiv. Putin made several general references to nuclear weapons in his September 30 speech but avoided directly threatening the use of nuclear weapons.[4] Putin’s rhetoric during this speech and throughout October was consistent with his previous nuclear threats and failed to generate the degree of fear within the Ukrainian government that the Kremlin likely intended.[5] Ukrainian Main Military Intelligence Directorate (GUR) Chief Kyrylo Budanov stated on October 24 that the Russian nuclear threat has remained at the same level even prior to the start of the war.[6] The Kremlin also escalated its nuclear rhetoric after Russian military failures in Kharkiv Oblast and during Ukrainian counteroffensives in Lyman and northern Kherson Oblast in early October. The Kremlin likely continued its thinly veiled nuclear threats to deflect from their military and mobilization problems and to intimidate Ukraine’s Western partners.

The Kremlin’s rhetorical shift indicates that senior Russian military commanders and elements of the Kremlin are likely to some extent aware of the massive costs for little operational gain Russia would incur for the use of nuclear weapons against Ukraine or NATO. The New York Times, citing senior US officials, reported that senior Russian defense officials discussed the conditions for nuclear use against the backdrop of growing nuclear narratives in mid-October.[7] The meeting reportedly did not involve Putin. Putin’s illegal September 30 annexation of four Ukrainian oblasts, much of whichRussian forces do not occupy, likely overcomplicated existing Russian military doctrine. Russian nuclear doctrine clearly allows for nuclear weapons use in response to “aggression against the Russian Federation with the use of conventional weapons when the very existence of the state is in jeopardy,” which the Kremlin could conceivably apply to Ukrainian advances into claimed ”Russian” territory in Ukraine.[8] All of the current frontlines fall within claimed Russian territory, andPutin has not publicly defined what now constitutes an attack on Russian territory. It is possible that senior Russian military officials are equally confused about the application of Putin’s annexation order to existing military doctrine. ISW previously reported that Putin’s annexation order was likely a polarizing issue that ignited a fracture within the Kremlin, creating pro-war and pro-negotiations factions.[9] US officials also noted that they have not observed any indicators that Russia has moved its nuclear weapons or undertaken any preparatory steps to prepare for a strike.[10]

Kremlin-run television shows still air the occasional nuclear threat, which are common in Russia’s jingoistic domestic information space. For example, Russia’s State Duma Committee Chairman on Defense, Andrey Kartapolov, briefly discussed nuclear threats on Russian state TV on November 5 despite the general softening of the Kremlin’s narrative.[11] Russian state TV (alongside some populist figures) have previously amplified nuclear threats prior to Russian military failures in the autumn, and their rhetorical flourishes should not be misconstrued as indicators of the Kremlin’s official position. Figures such as the late Russian ultra-nationalist and then leader of the Liberal Democratic Party Vladimir Zhirinovsky made regular and outlandish nuclear threats on Russian state broadcasts for years, even threatening to drop a ”little” nuclear bomb on the residence of then-Ukrainian President Petro Poroshenko in 2018.[12] The Russian milblogger community largely did not interact with these nuclear narratives and continued to criticize that Russian military command for its conventional battlefield failures. Russian propagandists will continue to make these threats as a way of reminding domestic audiences of Russia’s might amidst clear military failures on the frontlines.

The Kremlin likely privately clarified its nuclear policies to deescalate with the United States and its allies. US and allied officials reported that US National Security Advisor Jake Sullivan has been in contact with Putin’s foreign policy advisor Yuri Ushakov and Security Council Secretary Nikolai Patrushev in an effort to reduce the risk of nuclear use.[13] The Russian Ambassador to the United Kingdom, Andrey Kelin, also noted on October 26 that Russian Defense Minister Sergey Shoigu made several calls to his counterparts, reportedly assuring them that Russia is uninterested in using nuclear weapons in the war.[14] China might have also played a role in pressuring the Kremlin to reduce its nuclear threats. Chinese President Xi Jinping stated on November 4 that “the international community should… jointly oppose the use or threats to use nuclear weapons, advocate that nuclear weapons must not be used and nuclear wars must not be fought, in order to prevent a nuclear crisis in Eurasia.”[15] Chinese Defense Minister Wei Fenghe likely expressed a similar notion to Shoigu during an October 26 call.[16]

The Kremlin may conduct future rhetorical nuclear brinksmanship in an effort to prompt the United States and its allies to pressure Ukraine to negotiate; the Kremlin will be unable to directly force Kyiv to negotiate through nuclear threats. ISW continues to assess that Russian nuclear use in Ukraine remains unlikely and that the Kremlin is currently taking steps to deescalate its nuclear rhetoric. The Kremlin’s nuclear threats failed to undermine Ukrainian political and societal will to continue to oppose Russia’s invasion. As ISW wrote on September 30, “Ukraine and its international backers have made clear that they will not accept negotiations at gunpoint and will not renounce Ukraine’s sovereign right to its territories.”[17] The United States and its allies should not undermine Ukraine’s continued dedication to recapturing all Russian-occupied territory and halting Russia's genocidal invasion. 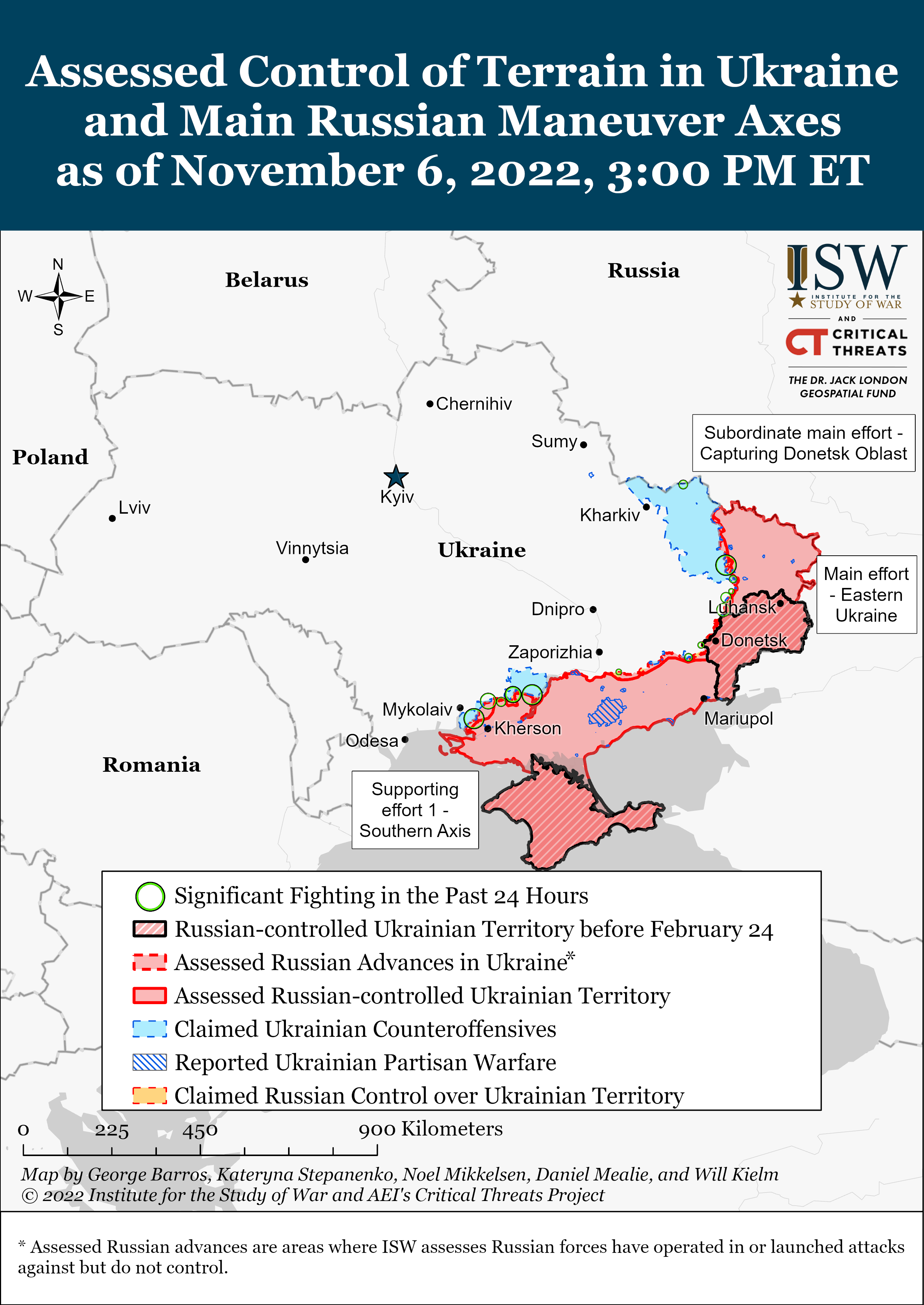 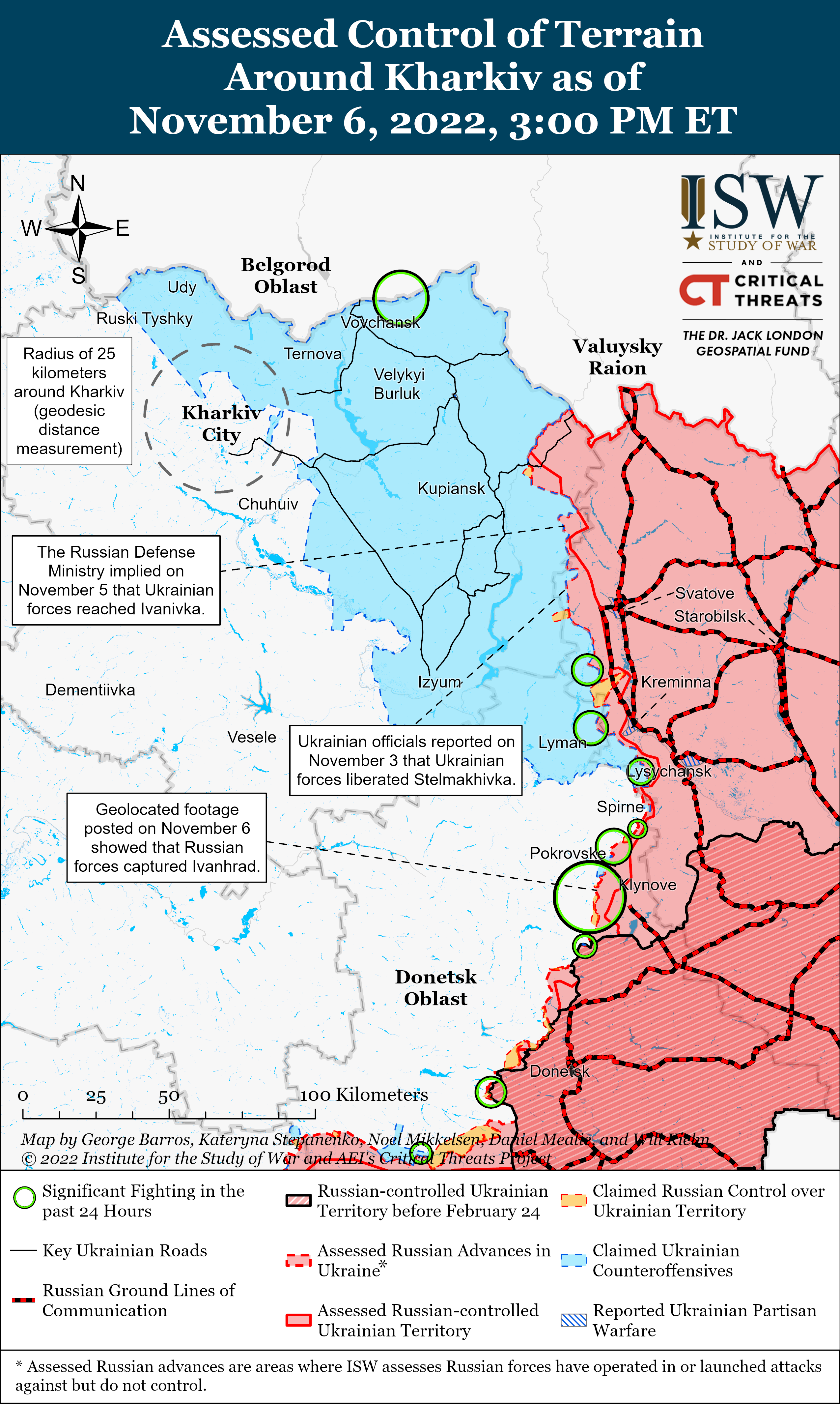 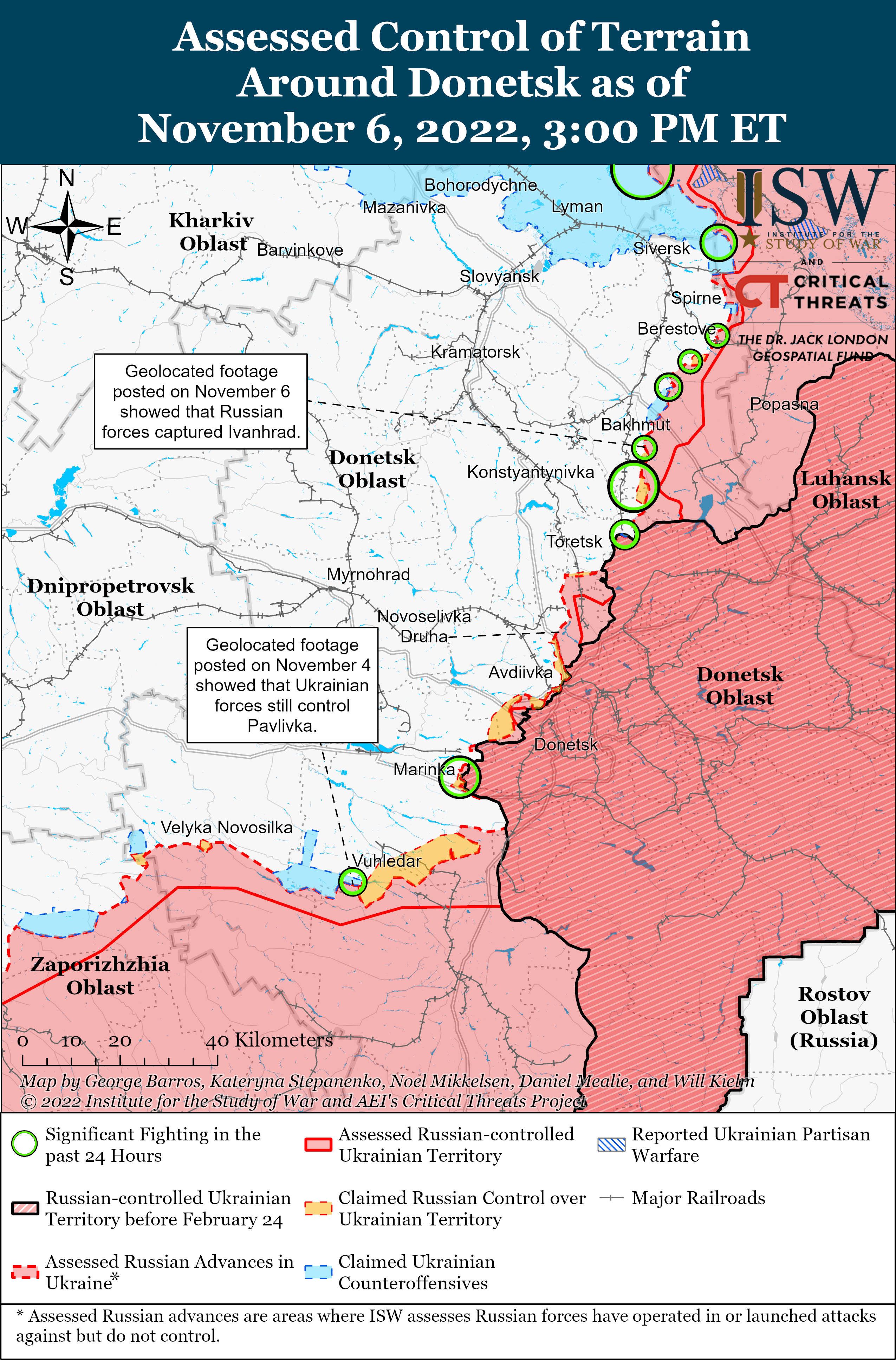 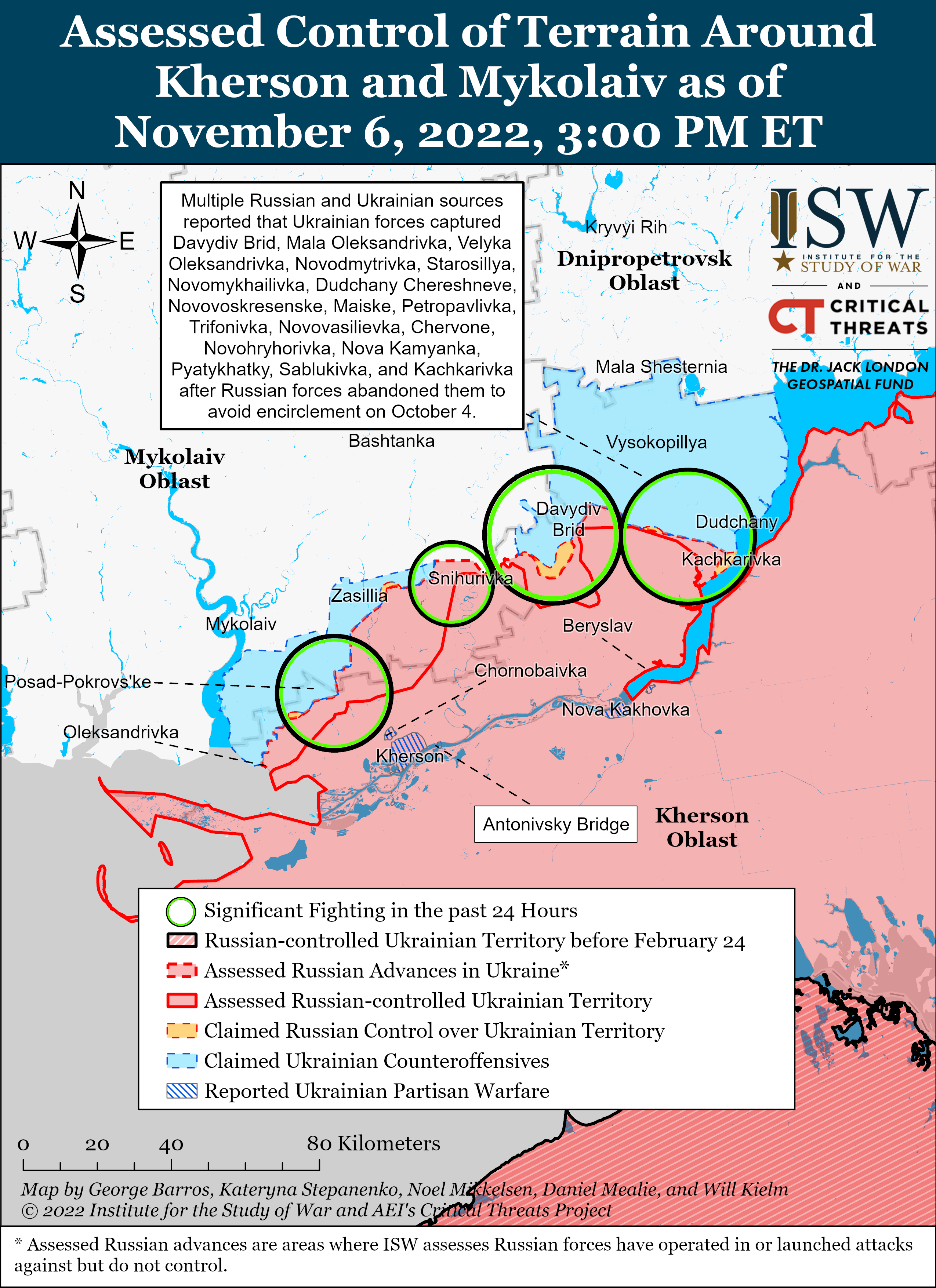