Military Learning and the Future of War Project

This series of papers explores the ways the United States and its potential adversaries, including Russia and China, are learning from ongoing geopolitical competition and military engagements. The series explores the ways these evolutions in the operating environment provide opportunities for experimentation and testing of new technologies, capabilities, and approaches to war. The papers explore organizational adaptations to incorporate new capabilities, doctrinal changes to harness them, and the ability to institutionalize these changes in ways that will shape the future of war.

The PLA’s Evolving Outlook on Urban Warfare: Learning, Training, and Implications for Taiwan

Report by Elsa Kania and Ian Burns McCaslin (April 2022)
The People’s Liberation Army (PLA) has been increasing its study, training, and preparation for future urban warfare over the past decade. The PLA has limited experience with urban warfare and so often relies on observations of other militaries to inform its outlook. Among the drivers for this interest in urban warfare is that any Chinese campaign to force “(re)unification” with Taiwan could involve intense fighting in Taiwanese cities. The current edition of the Science of Military Strategy mentions an urban offensive (城市进攻) as a component of island operations (岛上作战) but does not elaborate on the conduct of such an offensive, likely because of the sensitivity of this scenario. This campaign could present a particular challenge, given that over 90 percent of Taiwan’s population lives in cities. Beyond the possibility of invading Taiwan, the Chinese Communist Party (CCP) is also concerned about terrorist threats, whether real and imagined, within China’s cities or against the security of Chinese citizens and businesses worldwide. Meanwhile, the conduct of urban counterterrorism has become the focus of several exercises and exchanges undertaken by the PLA and the People’s Armed Police (PAP).
Read the executive summary and download the full report here.

The Future of War and America’s Strategic Capacity

The world is not in an era of change; it is in the midst of a change of era, affecting almost every aspect of individual and communal life. The amount and velocity of change will continue to increase and thus exacerbate the already significant stress on the leaders and institutions within nations as well as those associated with the global security environment. The probability of conflict—war in all its forms—is rising. Correspondingly, the importance of thinking and acting at the strategic level is rising as well.
No single organization in the US National Security apparatus is charged with attending to the strategic-level lessons the United States should be learning. The study of tactics and individual battles; the forces, weaponry, and equipment used to fight; and how battles are strung together into campaigns—are all necessary and important elements concerning the future of war. The US military services, the Joint Staff, Geographic Combatant Commanders, and the US defense industries are hard at work trying to figure out future warfighting requirements: new weapons and equipment, new fighting methods, new-leader development and training requirements, new capabilities, and new organizations. The results of this work at the tactical and operational levels of war will affect success at the war-fighting level. This paper does not aim to duplicate this effort. Rather, this paper begins from a different perspective, one that acknowledges that wars must also be waged in addition to being fought. 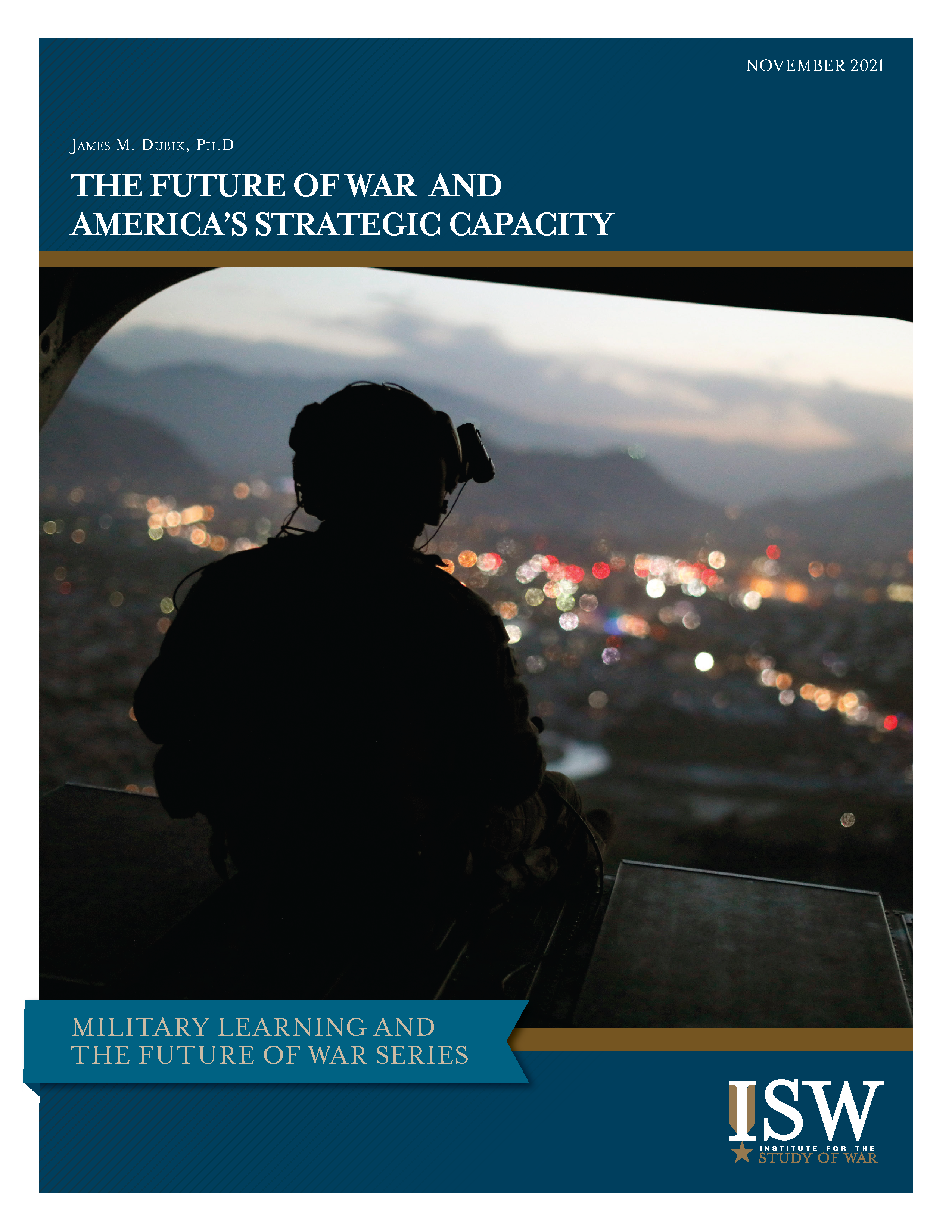 The Chinese People’s Liberation Army (PLA) is faced with the challenge of preparing for future warfare during peacetime as a force that lacks contemporary operational experience. Among the methods through which the PLA seeks to enhance its combat readiness are sophisticated wargaming and realistic, force-on-force exercises. Chinese military leaders regard wargaming (bingqi tuiyan, 兵棋推演) as an important technique by which to “learn warfare from the laboratory” for training purposes and to promote insights on the dynamics of future combat. This style of learning is complemented by the PLA’s study of military history and emulation of the experiences and innovations of foreign militaries, including through creating “blue forces” that simulate potential adversaries against which to train. Beyond improving its current capabilities and readiness, the PLA also aspires to achieve an edge in military competition, seeking to “design” the dynamics of and develop capabilities for future warfare. 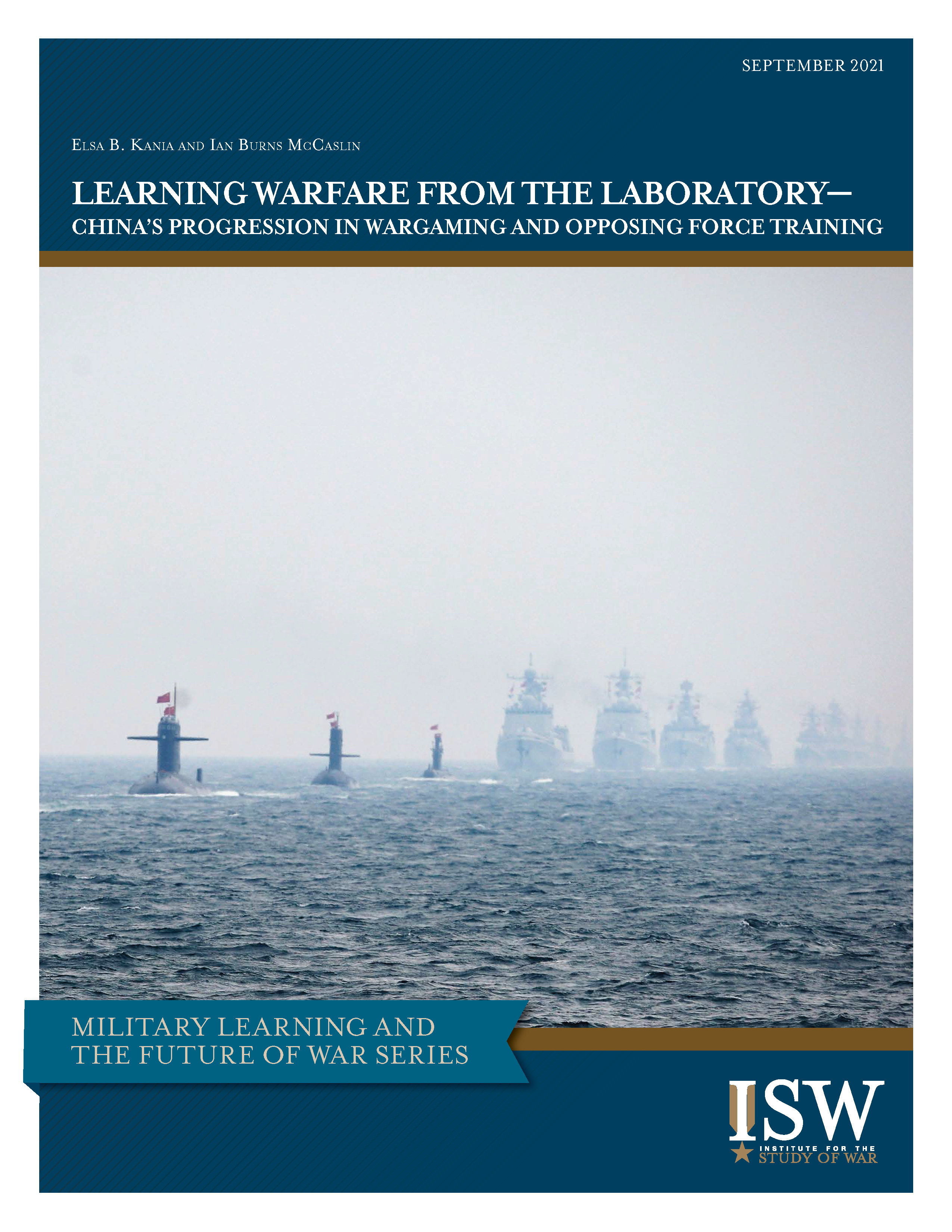 The Russian military identifies its deployment to Syria as the prototypical example of future war—an expeditionary deployment to support a coalition-based hybrid war. The Russian General Staff cites Syria as highlighting the need for Russia to develop a new military capability—deploying flexible expeditionary forces to carry out “limited actions” abroad. The Russian Armed Forces are applying lessons learned from their experience in Syria to shape their development into a flexible and effective expeditionary force.
The United States must avoid projecting its own modernization priorities—or those of other competitors such as China—onto Russia. The Russian military is making discrete choices to concentrate on certain learning opportunities from Syria while rejecting or deemphasizing others. These choices are optimized to support a Russian concept of operations that is distinct from both pre-Syria Russian modernization efforts and the United States’ own modernization efforts.
The United States and its allies must prepare to confront an increasingly effective Russian military that is intent on further developing expeditionary capabilities and using them in coalition environments. Russia is still involved in and still learning from the conflict in Syria. Additional Russian discussion and testing of ideas, not to mention further combat experience, will likely refine many of the adaptations that the Russian military is still developing from its lessons learned in Syria. The Russian military’s learning from Syria is driving Russian modernization efforts; the United States must understand this learning and adaptation to confront the Kremlin effectively. The COVID-19 pandemic is changing the global order and reshaping the balance of power on the world stage. The lessons that nations and their militaries take from this crisis will shape their capacity to adapt to COVID-19 and enhance their resilience to future crises. This paper explores the initial lessons the Chinese Communist Party (CCP) and the People’s Liberation Army (PLA) are learning from the COVID-19 pandemic and what those lessons could teach the PLA about mobilizing in response to future crises, including with the United States.

China tested its evolving nationwide defense mobilization to wage “people’s warfare” against the pandemic by leveraging all available resources and capabilities, including military, reserve, and militia forces. The PLA’s approach to COVID-19 leveraged previous experiences with pandemics and tested China’s strategy of civil-military fusion by combining military and civilian resources.

The CCP considers its national response to the coronavirus pandemic to be not only successful but also superior to that of the US, boosting Chinese confidence in the PLA as China’s rivalry with the US and its allies in the Indo-Pacific accelerates into an aggressive competition. The implications of the PLA’s active learning from its “people’s war” against COVID-19 are extensive and demonstrate the growing military capabilities of China as it seeks to actively contest the US-led international order, both in Asia and farther afield.

These lessons learned by the PLA during the COVID-19 crisis may eventually inform China’s transition from peacetime preparedness to a wartime footing in future conflict scenarios, including against the US and its allies. Military Learning and the Future of War

Read this essay from ISW's President and Founder Kimberly Kagan to learn more about the project. (September 2020)

The West has had some success in countering the Kremlin since Russia’s illegal occupation of Crimea, but Russian President Vladimir Putin has found ways to offset external pressures on Russia without relinquishing his gains and goals. Putin’s center of gravity is increasingly his ability to shape others’ perceptions and create the image of a powerful Russia based on limited real power.

Putin’s efforts since 2014 to offset the weaknesses of Russia’s position and advance his goals have focused on creating a Russia-favorable global information space; growing Russia’s military footprint in a targeted way that provides asymmetric opportunities to influence decision making; cocooning Russia in a network of coalitions and international organizations to amplify Russia’s limited power; diversifying the tools and means of Russia’s influence and subversion; expanding Russia’s influence in peripheral theaters; and consolidating power inside Russia.

Putin’s evolving approaches enable him to play a bad hand well, but his hand remains weak. Putin’s dependency on asymmetrical approaches will grow as the gap between his means and aims likely increases. This gap will not necessarily threaten the survival of Putin’s regime, but it will provide opportunities for the US to counter the Russian challenge.

The West should cut oxygen to two key amplifiers of Putin’s power — narratives and coalitions. The long-term solution versus Russia would be building collective immunity to the Russian challenge, including strategic intelligence capabilities in the US and its partners to recognize Putin’s slow tactical creep before it becomes his strategic advantage. America’s current strategy for responding to the Russian threat is based on a misunderstanding of the Russian approach to war and exposes the United States and its allies to a high risk of strategic defeats. The 2018 US National Defense Strategy gives primacy to deterring major conventional great power wars. Russia also seeks to avoid such wars even as it designs a different way of waging war to achieve its revisionist objectives. The US largely views this Russian approach, hybrid war, as a set of activities below the level of conventional conflict. But Russia includes significant conventional conflict in its conception and execution of hybrid war. If the US continues to focus on deterring the kind of war Russia does not intend to fight while underestimating the role military force can and must play in preventing Moscow from accomplishing its aims through hybrid war, then the US will likely suffer serious strategic defeats even as its defense strategy technically succeeds.

The Kremlin is even now waging a hybrid war against the United States. The Kremlin assesses that hybrid wars already dominate 21st century conflict and will continue to do so. The Kremlin believes it must adapt to win this struggle, profoundly shaping Russian military development and assessments of the future of war.

Russian hybrid wars include the use of significant conventional forces and conflict. The Russian military defines a “hybrid war” as a strategic-level effort to shape the governance and geostrategic orientation of a target state in which all actions, up to and including the use of conventional military forces in regional conflicts, are subordinate to an information campaign.

The Russians define hybrid war precisely and coherently as a type of war, rather than a set of means to conduct state policy. The U.S discussion of hybrid war overly focuses on the means short of conventional forces and conflict that the Russians have most famously used. The Russian soldiers without insignia (“little green men”) who helped seize Crimea in 2014, and the proxies Russia uses in eastern Ukraine, are most often the focus of Western assessments about how to respond to Russian hybrid war.

The Russian conception of hybrid war is much more expansive. It covers the entire “competition space,” including subversive, economic, information, and diplomatic means, as well as the use of military forces extending above the upper threshold of the “gray zone” concept that more accurately captures the Chinese approach to war.