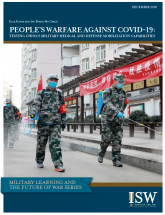 This paper is part of ISW's Military Learning & The Future of War series. Click here to go to the series homepage.

“This epidemic is not only a crisis, but also a big test, and a war. I said from the beginning, we must fight; this is a people’s war.”

The COVID-19 pandemic is changing the global order and reshaping the balance of power on the world stage. The lessons that nations and their militaries take from this crisis will be highly consequential to their capacity to adapt to this disruption and enhance their resilience going forward. In the wake of the coronavirus pandemic, China’s self-declared successes in its national response increased Beijing’s influence and its confidence in the advantages of its Party-state model, which CCP leaders claim possesses “systemic superiority” (体制优势).

The Party’s accounts of its success can be difficult to evaluate critically, given the suppression of information and extensive propaganda. Indeed, accounts have since emerged that contradict Beijing’s official narrative, including with regard to initial delays in testing and distortions in data. While important lessons can be learned from the CCP’s eventual successes in combating the pandemic, there are also lessons to be drawn from early failures that had allowed the outbreak of COVID-19 to become a pandemic in the first place. Certain issues exposed during the early stages of the pandemic have been revealing of systemic problems that have yet to be resolved. At this point, the question of whether Chinese leaders will learn from and adapt in response to the crisis remains to be seen.

The pandemic has presented a grave test for the CCP; the stakes have been extreme, even existential. By the Party’s reckoning, its response was not only successful but also superior to that of the United States, as PRC state media has often argued. Although there are reasons for skepticism about and recognition of the limitations of available information, a review of official accounts and authoritative commentary on China’s pandemic response can nonetheless provide valuable insights about China’s national security system and mobilization capabilities.

Significantly, the coronavirus pandemic constituted the first major test of China’s system for “national defense mobilization” (国防动员) since the latest reforms. This architecture constitutes a critical element of China’s capacity to respond to a crisis or conflict contingency and is intended to be coordinated with emergency response functions. Waging “people’s warfare” against the pandemic, China’s leaders sought to leverage and coordinate all available resources and capabilities, including military, reserve, and militia forces, as well as thousands of businesses nationwide. The relative sophistication of this effort hints at the capabilities that China could bring to bear in a future conflict scenario, and indeed, lessons learned from the study of this response, including its strengths and weaknesses, may inform reforms aimed to facilitate the transition from peacetime preparedness to a wartime footing in future conflict scenarios.

The COVID-19 pandemic has demonstrated that medical capabilities are important for ensuring military readiness and national preparedness. The Chinese People’s Liberation Army (PLA) was a critical component of the pandemic response within Wuhan and beyond, from logistics support to medical research. The PLA’s prominent contributions have been lauded as an example of the importance of “military-civilian unity” (军民团结) in PRC state media. The PLA’s approach in responding to COVID-19 leveraged experiences with previous pandemics, including SARS in 2003 and Ebola in 2014. Concurrently, the PLA took measures to constrain the spread of the outbreak within its own ranks, aiming to balance training and readiness with ongoing epidemic prevention and control measures.

In the wake of the pandemic, China has elevated biosecurity as a national security priority, and Chinese leaders aim to implement reforms for China’s systems for emergency response and national defense mobilization. For the PLA, biosecurity and medical research are likely to be priorities going forward. However, whether the Party-state has the capacity to recognize systemic issues and implement reforms based on lessons learned from the COVID-19 pandemic remains to be seen. Going forward, China’s national defense mobilization system and potential, enabled by continued improvements in data analytics, will be an important indicator for its capacity to leverage national resources in any future crisis or conflict scenario.

Return to the Military Learning & Future of War Homepage. 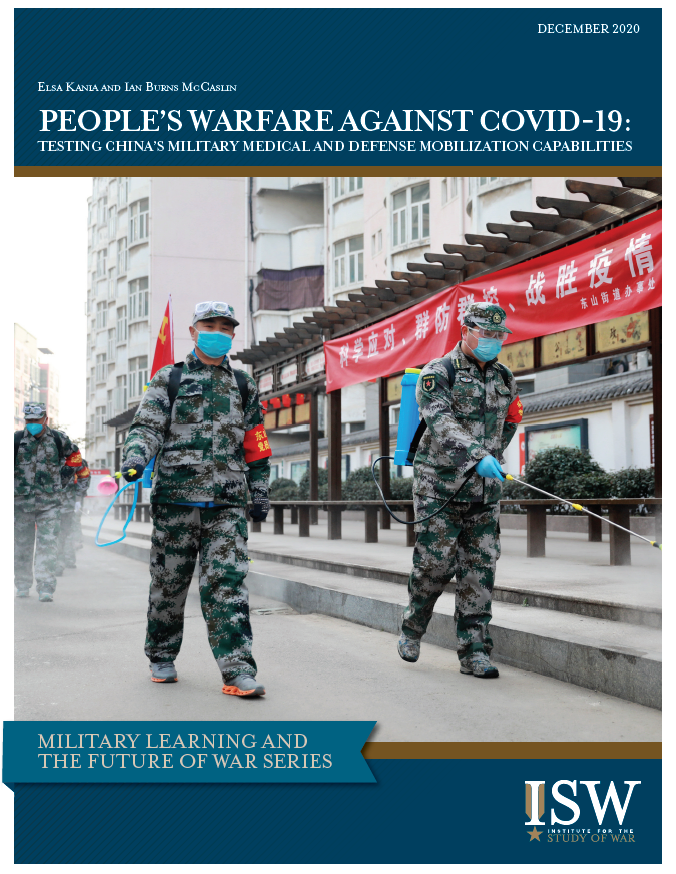