Iranian Proxy Violence Possible in the Wake of Iraqi Elections

Iran’s Iraqi proxies will likely increase their use of violence and other forms of coercion against political opponents and the Iraqi state in the coming months. The political wings of Iran’s Iraqi proxies lost two-thirds of their parliamentary seats in Iraq’s October 10, 2021, elections, which they are legally contesting due to perceived fraud. Iran’s Iraqi proxies may escalate against UN, US, Emirati, or suspected Israeli personnel or assets in retaliation for their perceived role in the proxies’ political losses in the coming months. Domestic political conflicts, Iranian decision-making, Iranian proxy attempts to enforce the December 31 deadline for the withdrawal of US forces from Iraq, and the potential for a new regional ISIS campaign to stir up sectarian violence could exacerbate post-electoral Iranian proxy violence in Iraq.

Iran’s proxies lost ground in Iraq’s October 10, 2021, parliamentary elections while their rival, nationalist Shi’a cleric Moqtada al-Sadr, made dramatic gains, setting conditions for a potential second term for Prime Minister Mustafa al-Kadhimi. All Iraqi parties are now negotiating to form the “largest bloc” in Parliament, which will have the first chance to appoint a prime minister-designate. That prime minister-designate must then form a cabinet within 30 days and secure the support of at least 165 parliamentarians (out of 329) to form a government. The leading bloc is Toward Reform, the party of the notoriously mercurial Sadr, who went from controlling the largest bloc in 2018 with 54 seats to an overwhelming 73-seat plurality in 2021.[1] Sadr is most likely to nominate the politically independent current prime minister, Kadhimi, for a second term; Sadr’s other three named picks are Sadrists of whom few parliamentarians would approve.[2]

Candidates representing Iran’s proxy militias lost badly in the 2021 elections; Iran’s parliamentary proxy—the Conquest Alliance bloc that encompasses the political wings of Badr Organization and US-designated terrorist organization Asa’ib Ahl al-Haq (AAH)—secured only 16 seats, a dramatic loss from its 2018 high of 47.[3] Proxies are politically disadvantaged even when factoring in their five seats among minority quota candidates and the one seat secured by US-designated terrorist organization Kata’ib Hezbollah (KH)’s Rights Movement, KH’s first foray into parliamentary politics. Proxy militias and politicians, as well as former Prime Minister Nouri al-Maliki, have all claimed that the elections were stolen by the United Nations, the United States, Israel, or the United Arab Emirates and demanded recounts.[4]

Iranian leaders appear to be comfortable with a Sadrist-dominated government under a second-term Prime Minister Kadhimi.  Iranian officials described Sadr’s victory as a win for Shi’a Islamists and characterized Iraq’s elections as successful.[5] Tehran has historically been able to bend Sadr to its will when necessary and likely believes that a combination of Iranian pressure and Sadr’s inherent anti-US tendencies will be sufficient to advance Iran’s core strategic objectives: ousting US forces from Iraq and maintaining a non-threatening, Shi’a-led client state there. Iranian rhetoric suggests that Iran’s leadership is unwilling to dramatically destabilize Iraq over the election results alone. Tehran knows that the makeup of Iraqi governments has never been determined by electoral results alone and that its proxies will likely still have a say in the process. Separately, Iran will likely order a resumption of proxy attacks on US forces near the end of 2021 to force a complete withdrawal of all US forces, including advisors, from Iraq. US combat forces (but not advisory forces) plan to depart Iraq by December 31, 2021.

A potential new ISIS campaign could stir up sectarian conflict. ISIS’ Afghanistan affiliate, IS-KP, has called on ISIS cells around the world to attack Shi’a mosques “from Baghdad to Khorasan” to mirror the October 15 ISIS attack on a Shi’a mosque in Kandahar.[6] An ISIS attack on a Shi’a mosque or another symbolic Shi’a target in Iraq could become an opportunity for Iranian proxies to rally support among Iraq’s Shi’a population by attacking Sunni groups. Iraqi Security Forces and their Coalition advisors must remain vigilant in the coming months to prevent attacks by ISIS from igniting Iraqi tensions into broader sectarian conflict.

Below are the most likely trajectories for Iraq to follow in order of highest- to lowest-assessed probability.

Violence by Iraqi Security Forces (ISF) against proxy protesters or staged violence by proxy infiltrators within the ISF could trigger a proxy escalation without Iran’s approval. Any proxy escalation against the government in Baghdad could incite Sadr, the electoral victor, to mobilize his own militias, risking a cyclical descent into intra-Shi’a conflict and possibly civil war. Potential targets of Iranian proxy violence include US forces, facilities, and personnel, the UAE embassy, and personnel affiliated with the United Nations or international electoral observation missions. A prolonged and contentious government formation process would also provide greater opportunities for ISIS to exploit political divides and trigger sectarian violence that could intersect with and exacerbate political tensions. 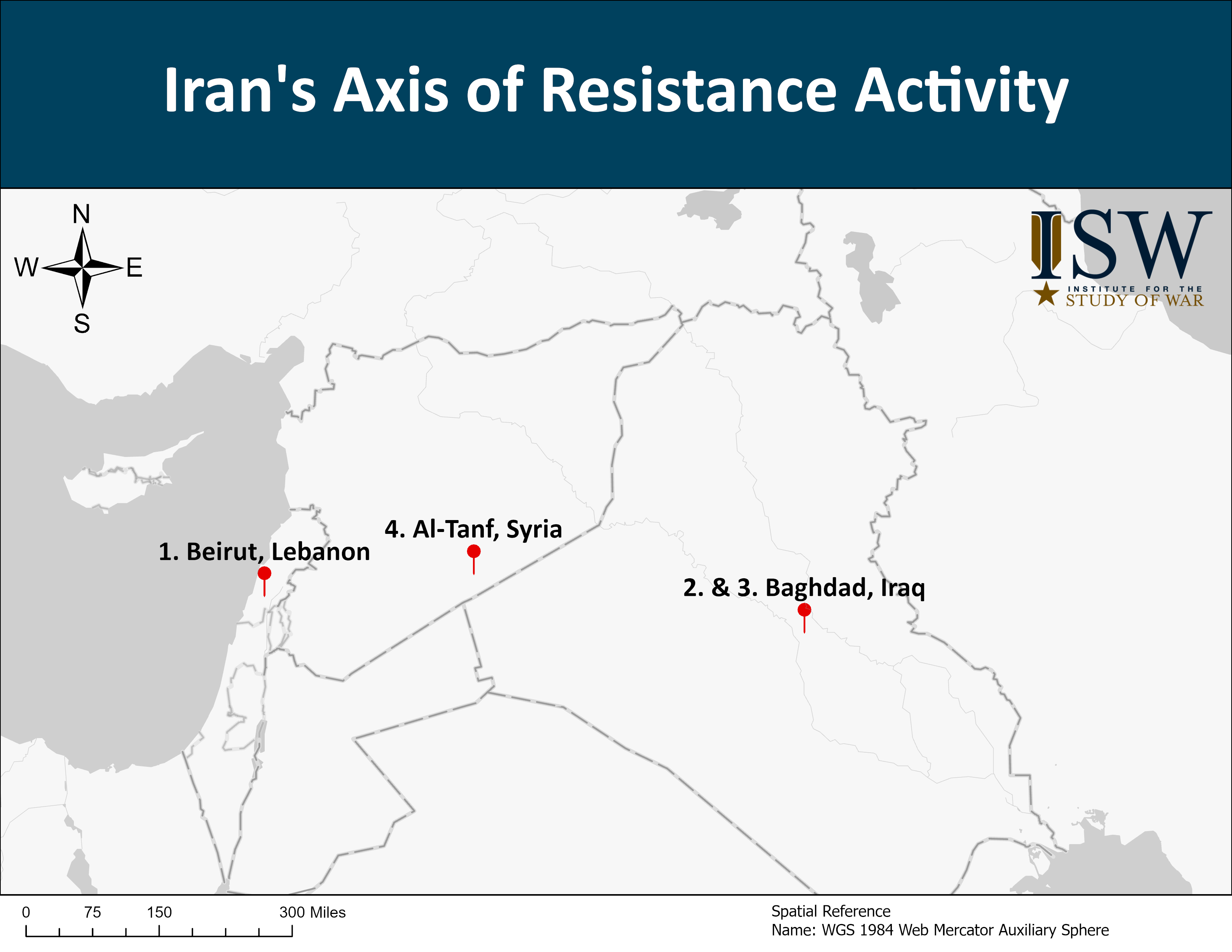 [3] Jessa Rose Dury Agri and Patrick Hamon, “Breaking Down Iraq’s Election Results,” Institute for the Study of War, May 24, 2018. https://www.understandingwar.org/backgrounder/breaking-down-iraqs-electi....

[11] Ben Hubbard and Hwaida Saad, “Beirut, a City Where Everyone Gets by, Revisits Sectarian Violence,” New York Times, October 16, 2021. www.nytimes.com/2021/10/16/world/middleeast/beirut-lebanon-sectarian-vio...

[14] Hamdi Malik, “The Muqawama's post elections threats against UNAMI and the UAE,” Washington Institute for Near East Policy, October 19, 2021. https://www.washingtoninstitute.org/policy-analysis/muqawamas-post-elect...

[15] Ahmad Abdussada, “The Coordination: we reject the elections and the consensus | with Mullah Tallal” UTV, October 17, 2021.  https://www.youtube.com/watch?v=-llXTS-DGPM

[23] Luis Martinez and Matt Seyler. “No US injuries in attack on remote American base in Syria” ABC News, October 20, 2021. https://abcnews.go.com/Politics/us-injuries-attack-remote-american-base-...

Matthew Lee. “US, Israel say they are exploring a ‘Plan B’ for Iran” Associated Press, October 13, 2021. https://apnews.com/article/donald-trump-yair-lapid-antony-blinken-united...