Statements from the neighborhood youth groups portray a protest movement that is still trying to cohere and experimenting with different approaches. The Karaj group, among others, called for increasingly concentrated protests on each day from December 5 to 7.[4] The Tehran group repeated on December 3 its calls for a different approach, in contrast. The Tehran group acknowledged ”differences of opinion” and insisted that citizens only strike on December 5 because security forces can more easily identify protesters and traverse city streets during strikes due to the reduced traffic.[5] The Tehran group called for protests on December 6 and 7. This iteration within the protest movement is a natural step as it tries to coalesce and organize.

Senior Islamic Revolutionary Guards Corps (IRGC) officer Brigadier General Mohammad Taghi Osanlou reiterated demands that the Kurdistan Regional Government (KRG) disarm Kurdish militant groups in Iraqi Kurdistan and extradite some of them to Iran on December 3. Osanlou is the commander of the IRGC Ground Forces Hamzeh Seyyed ol Shohada Operational Headquarters, which controls IRGC units in Kurdistan and West Azerbaijan provinces.[6] Osanlou is therefore one of the principal officers responsible for any IRGC attacks into Iraqi Kurdistan. His comments are also noteworthy because he rarely makes prominent statements, in contrast with other senior IRGC officers.  The main units he controls include: 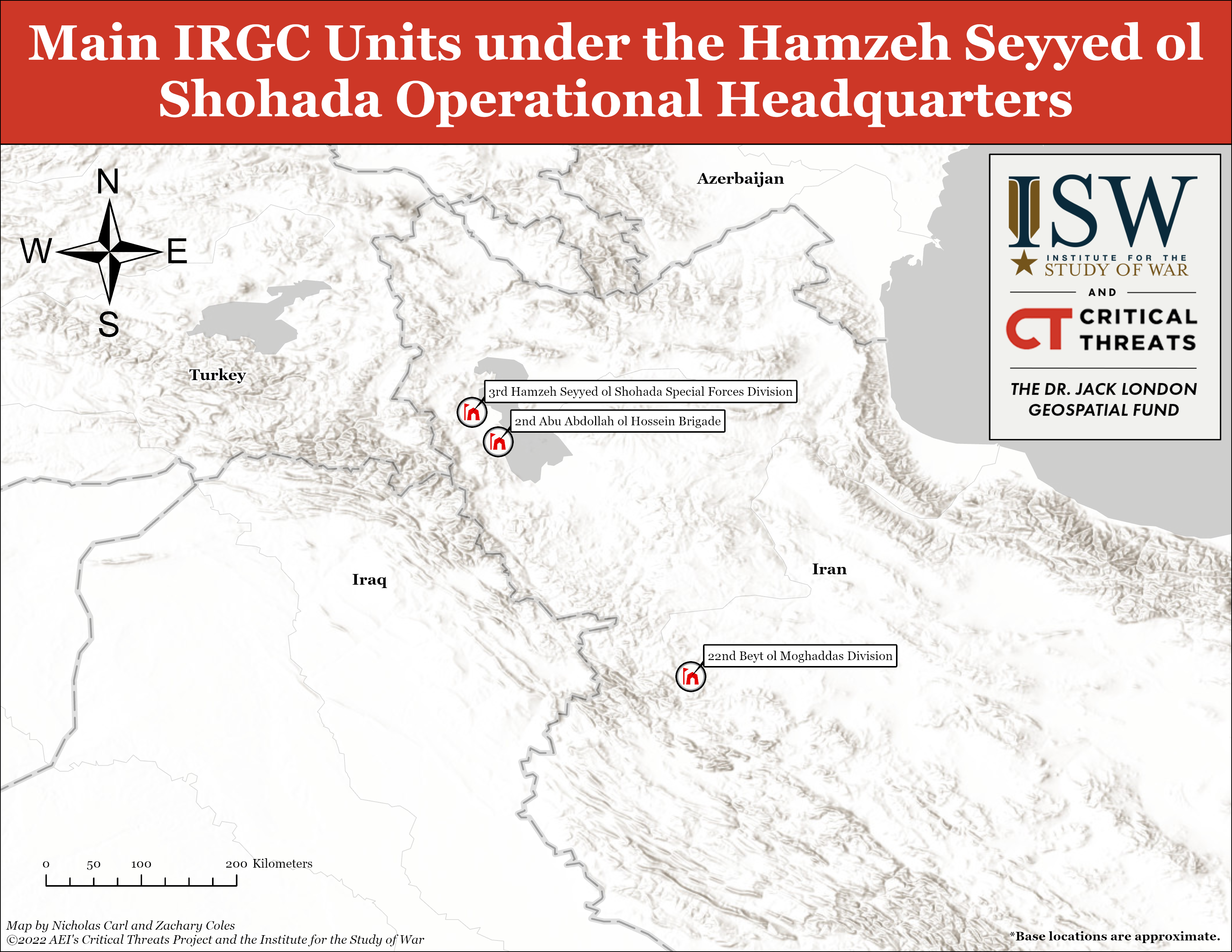 Osanlou stated that the Iran-Iraq border is presently stable but expressed dissatisfaction with the KRG’s failure to meet Iranian demands. Osanlou’s remarks diverge slightly from those of Foreign Affairs Minister Amir Abdollahian, who boasted that the Iraqi central government committed to disarming and removing Kurdish militants from the border region, on November 23.[7] IRGC leadership may remain dissatisfied with the Iraqi central government’s efforts thus far to adhere to Iranian demands.

At least nine protests took place in seven cities across seven provinces on December 3. CTP assesses with moderate to high confidence that protests occurred in the following locations: 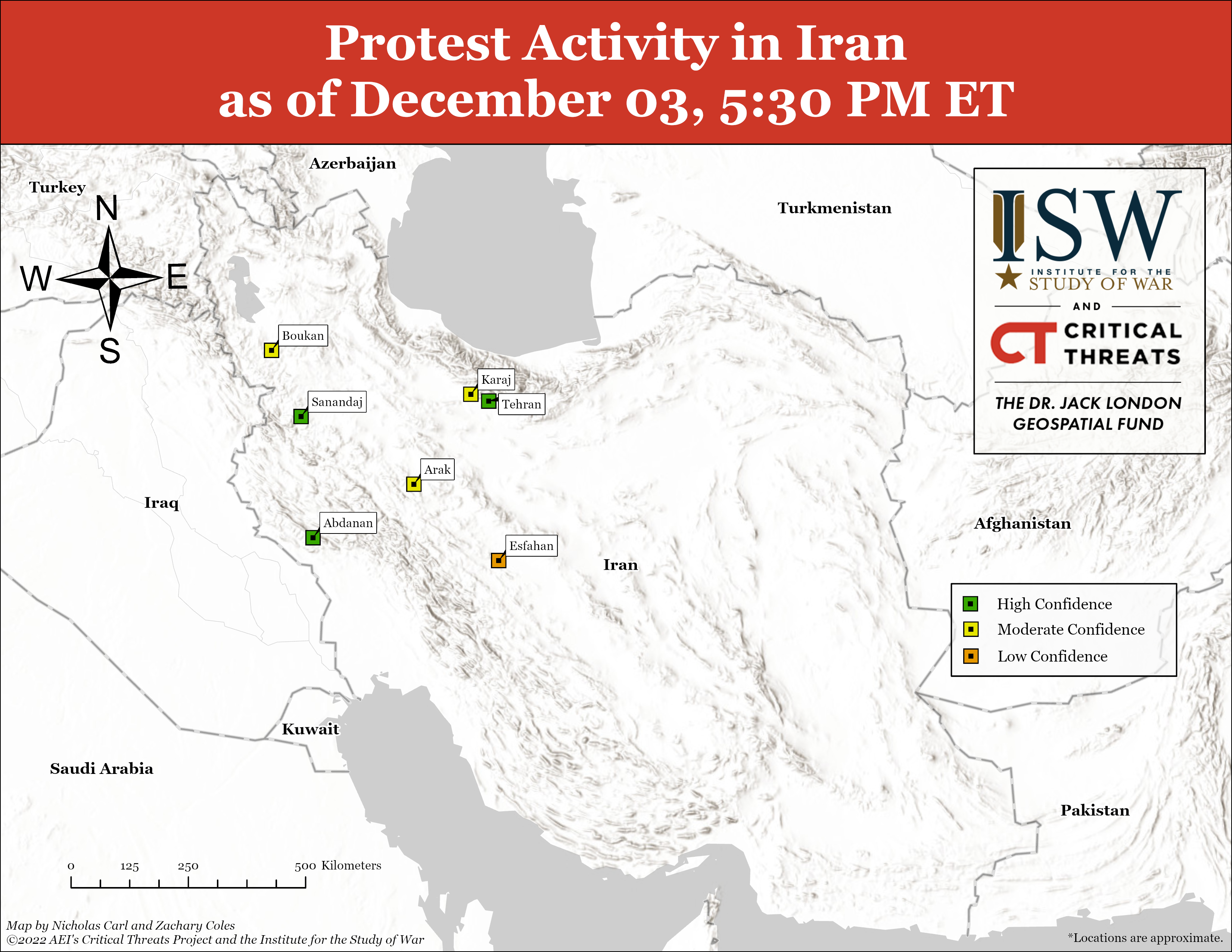 Shirin—a Persian-language protester social media account—created a website to document its political manifesto on December 2.[17] The group initially tweeted the manifesto on October 14, which called for a democratic, secular Iranian republic, and revised it on October 18, as CTP previously reported.[18]

The State Security Council threatened to confront protests “decisively and without tolerance” in a December 3 statement, likely to deter turnout of planned protests on December 5-7.[19] The security body reiterated regime claims that foreign enemies, such as the West and Saudi Arabia, are waging a hybrid war against Iran and thus responsible for the protests. The security body also reported an "unprecedented“ level of arms smuggling into Iran. Interior Minister Brigadier General Ahmad Vahidi chairs the State Security Council, which is under the Interior Ministry and responsible for domestic security issues. Other members include representatives from the Intelligence and Security Ministry, IRGC, Artesh, and Law Enforcement Command.[20]

Likely Iranian-backed militants launched four rockets at a Turkish military base near Bashiqa, Ninewa Province in northern Iraq on December 3. Two rockets landed within the base but did not cause any damage or casualties.[22] Liwa Ahrar al Iraq—an Iraqi front group with ties to Kataib Hezbollah—claimed responsibility for the attack.[23] The group frequently claims responsibility for attacks on the base, including the last incident on October 8.[24]