Note: CTP will not publish a daily Iran Crisis Update on November 24 for the Thanksgiving holiday. CTP will resume daily publishing on November 25.

Protest activity and strikes will likely increase in the coming days. Protest coordinators and organizations have called for countrywide demonstrations from November 24-26 in solidarity with the protesters in Kurdistan Province.[1] The regime has deployed the IRGC Ground Forces to cities and towns throughout Kurdistan Province to brutally crack down on protesters, as CTP previously reported.[2] Twenty-nine neighborhood youth groups issued a joint statement on November 23 calling for the upcoming protests, demonstrating a degree of overt coordination that CTP has not previously observed.[3]

The nature of the planned protests increases the risk to protesters. Protest coordinators and organizations have called for protesters to congregate on the major city streets in each city.[4] Some social media accounts have published routes protesters should use in Tehran.[5] The advance notice that protesters will gather on these main streets gives security forces time to prepare and a single known location at which to concentrate security personnel. The scattered nature of the protests up until this point has strained security forces’ limited bandwidth. Intelligence and Security Minister Esmail Khatib alluded to this vulnerability on November 9, as CTP previously reported.[6]

Supreme leader succession is heavily coloring how the Iranian political and security establishment responds to the protests. Mojtaba Khamenei—the son of Ali Khamenei and a potential successor—has reportedly held several private meetings in recent days possibly in part to reassert his influence within the regime. Mojtaba reportedly met with his political ally Hossein Taeb to discuss Taeb’s return to the security apparatus after Supreme Leader Ali Khamenei dismissed him as IRGC Intelligence Organization chief in June 2022.[7] Taeb’s removal may have degraded Mojtaba’s reach into the security sphere. Mojtaba also reportedly met with Fatemeh Hashemi Rafsanjani—the daughter of former President Ali Akbar Hashemi Rafsanjani.[8] Mojtaba complained about his political marginalization in the meeting, according to some Iranian outlets, although it is far from clear whether these reports are accurate.[9] These reports coincide with social media rumors claiming that Khamenei has rejected Mojtaba as a potential successor.[10] CTP cannot confirm any of these reports. These rumors and possible leaks underscore, however, the extent to which discussion about supreme leader succession and the associated political maneuvering likely remains prevalent in some regime circles. The struggle to determine who will replace Ali Khamenei may be fueling the intra-regime disagreements over protest suppression as well.

Mojtaba’s meeting with Fatemeh Hashemi Rafsanjani is particularly noteworthy given the reports that Supreme National Security Council Secretary Ali Shamkhani met with members of the Rafsanjani family to discuss cooperating to quell protests.[11] It is unclear whether Mojtaba’s possible meeting was related to this matter.

Khamenei’s rumored rejection of Mojtaba as a successor, if true, does not necessarily eliminate Mojtaba’s chances at supreme leadership. The Assembly of Experts is the regime body constitutionally responsible for selecting the next supreme leader and will at least formally approve Khamenei’s successor. Khamenei has likely communicated his preferences privately to his inner circle, but he cannot appoint his successor directly. He can instead try to shape the Assembly of Experts’ vote that will occur after his death and the preferences of other regime power centers while he is still alive.

Foreign Affairs Minister Hossein Amir Abdollahian stated on November 23 that the Iraqi central government committed to disarming and removing Kurdish militants from the Iran-Iraq border region.[12] Amir Abdollahian’s comments follow discussions between the Iraqi central government and the Kurdistan Regional Government on border security on November 22.[13] Iranian political and security leaders have repeatedly demanded that Iraqi authorities disarm and remove Kurdish militants in Iraqi Kurdistan in recent weeks due to the militants’ perceived role in stoking protests. It remains unclear whether the Iraqi central government will satisfy Iranian demands. Amir Abdollahian’s comments may provide the regime—and the Raisi administration more specifically—an offramp after Iranian Ambassador to Iraq Mohammad Kazem Al-e Sadegh issued an ultimatum with a deadline in 10 days for Iraq to address the Kurdish militant issue on November 21.[14] Iraqi officials have not commented on Amir Abdollahian’s statement as of this publication.

At least 16 protests took place in 11 cities across 11 provinces on November 23. CTP assesses with high to moderate confidence that protests occurred in:

Note: CTP defines small protests as fewer than 100 individuals, medium protests as between 100 and 1,000, and large protests as over one thousand. CTP will continue revising this approach to optimize how we present information in the most accurate and accessible way possible.

CTP assesses with low confidence that protests occurred in: 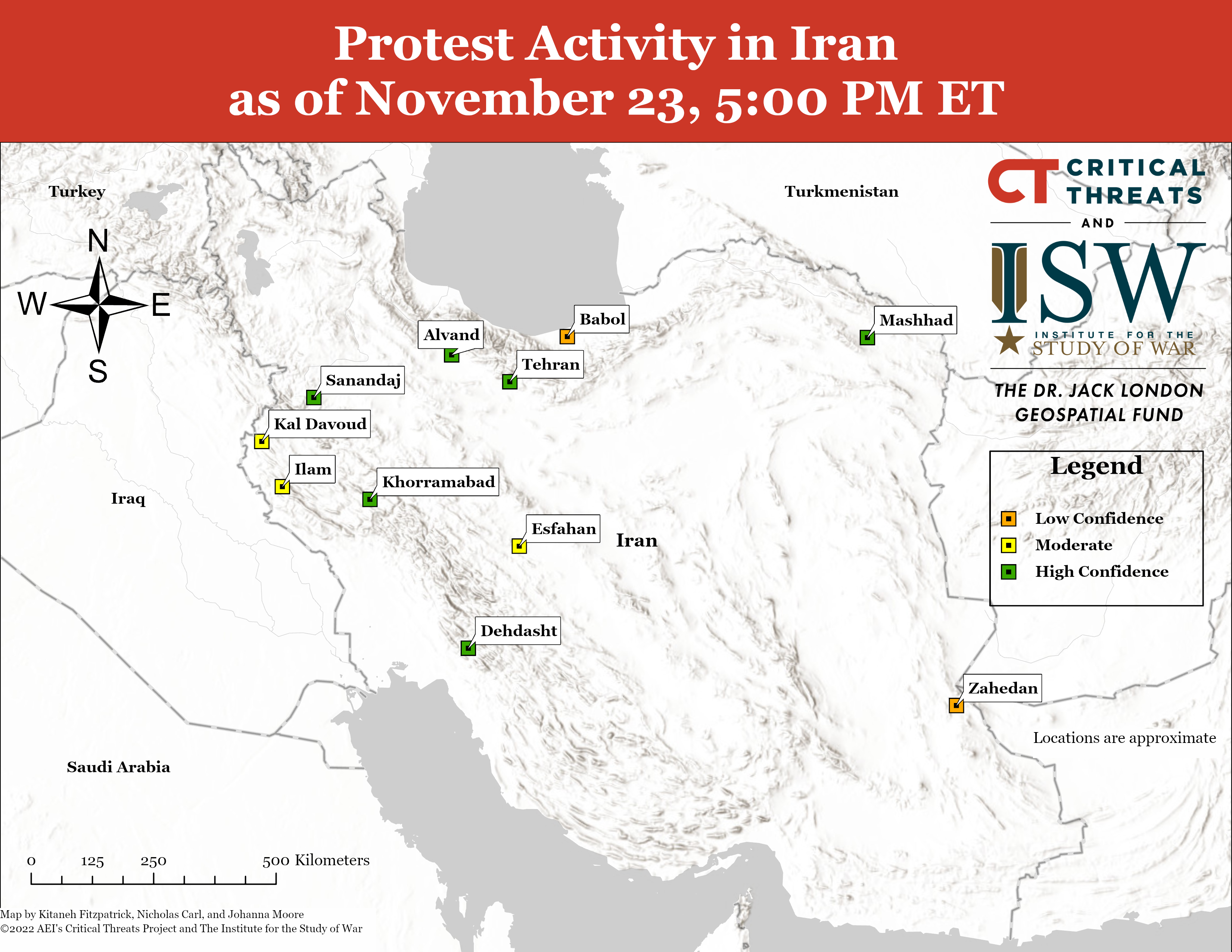 CTP has recorded protest activity in at least 183 cities throughout all of Iran’s 31 provinces since anti-regime demonstrations began on September 16. The actual number is likely higher considering ongoing telecommunication and internet restrictions imposed by the regime. 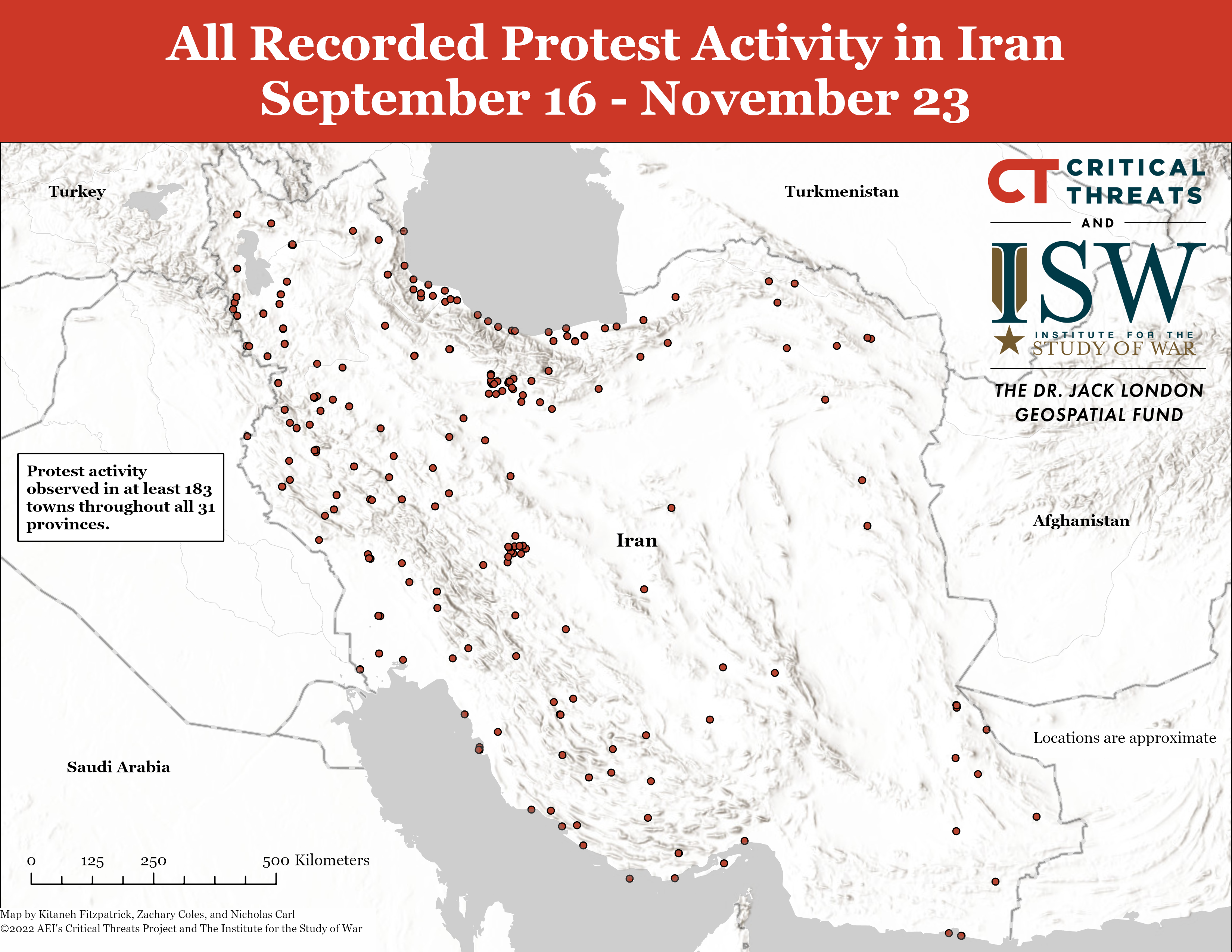 An LEC officer died on November 23 due to injuries he sustained in protests in Baneh, Kurdistan Province on October 27.[32] Protesters threw stones and improvised explosives at the LEC officer, hospitalizing him until his death.

The LEC Intelligence Organization arrested two individuals making Molotov cocktails and explosives in Qom City, Qom Province on November 23.[34] Iranian state media reported that the individuals disguised their workshop as a Basij base. The Basij Organization operates tens of thousands of bases across Iran. These bases are the central nodes around which local Basij members organize in each neighborhood. It is unclear whether these arrested individuals were actual Basij members who defected.

The office of a prominent deceased ayatollah released a statement calling for the Islamic Republic to hold a referendum to prevent a civil war. Hossein Ali Montazeri’s son Ahmad Montazeri—a reformist cleric who has previously expressed support for the 2009 Green Movement—penned the open letter, echoing several Sunni clerics prior calls for a referendum.[35] Hossein Ali Montazeri had been the designated successor to Islamic Republic founder Ayatollah Ruhollah Khomeini for a time in the 1980s. Ahmad Montazeri called on other clerics to speak out against the regime and is seemingly the first Shia cleric to suggest a referendum.[36] Clerics have not specified what a potential referendum would be, although it is likely that they are referring to a referendum on the regime like the 1979 referendum that established the Islamic Republic. That 1979 referendum consisted of a single question--should the Iranian monarchy become an Islamic Republic with a constitution to be approved by the people?[37] Those advocating for a referendum today could be calling for a straightforward vote on the same question.

Parliamentarian Esmail Kowsari confirmed on November 23 that the IRGC Ground Forces deployed in Kurdistan Province ostensibly to fight Kurdish militants and establish security around the borders.[38] Kowsari stated that security personnel from the LEC, Basij, and Intelligence and Security Ministry have died in the protests. Kowsari is an influential former IRGC brigadier general who has close ties to IRGC leadership and Mojtaba Khamenei.[39]