Protest activity may increase on December 5-7. An increasingly wide range of protest coordinators and organizations have called for countrywide demonstrations on these days. These organizers include neighborhood youth groups and Shirin—a Persian-language social media account that previously tweeted a political manifesto calling for the establishment of a democratic, secular Iranian republic.[1] Protest activity did not surge during the last planned demonstrations on November 24-26, however, possibly due to poor coordination.[2]

The nature of the planned protests furthermore suggests that at least some protest organizers are adapting to more effectively counter regime repression. The Tehran Neighborhood Youth released on November 30 its own call for demonstrations on December 5-7 and offered more specific instructions.[6]The group advised against simultaneous protests and strikes because the reduction in regular traffic caused by strikes allows security forces to more easily crack down. The group accordingly called for countrywide strikes on December 5, scattered protests on December 6, and concentrated protests around universities on December 7.

Anti-regime outlet Iran International published on November 30 a purportedly internal regime memo discussing the protests.[7] Iran International claimed that it received the document from Black Reward—the anti-regime group that hacked Fars News Agency and claimed to have recovered internal data, documents, and files on November 25.[8] CTP cannot verify this document and is treating it with great skepticism. We offer no assessment of its authenticity apart from noting that the style and word choice of portions of the document seem unusual for native Persian speakers. We are nevertheless reporting some of the key points of the document to make them accessible in English.[9] The document claims the following:

Iraqi Prime Minister Mohammad Shia al Sudani met with US-sanctioned Astan Quds Razavi (AQR) Custodian Ahmad Marvi in Mashhad, Khorasan Razavi Province on November 30, possibly to discuss commercial or financial cooperation.[10] AQR is a parastatal economic conglomerate that is responsible for the Imam Reza shrine in Mashhad and controls a vast network of commercial interests active in agriculture, energy, financial services, information technology, and manufacturing.[11] AQR is a “vital economic artery” for regime officials and has ties to the IRGC.[12] Marvi is a close associate of Supreme Leader Khamenei and has headed AQR since March 2019.[13] The US has sanctioned both AQR and Marvi for their ties to Khamenei.[14] Iranian state media has not explicitly reported on the Sudani-Marvi meeting at the time of this writing but has published photos depicting the two together.[15]

At least nine protests took place in seven cities across six provinces on November 30. CTP assesses with moderate to high confidence that protests occurred in the following locations:

CTP assesses with low confidence that protests occurred in the following locations on November 30: 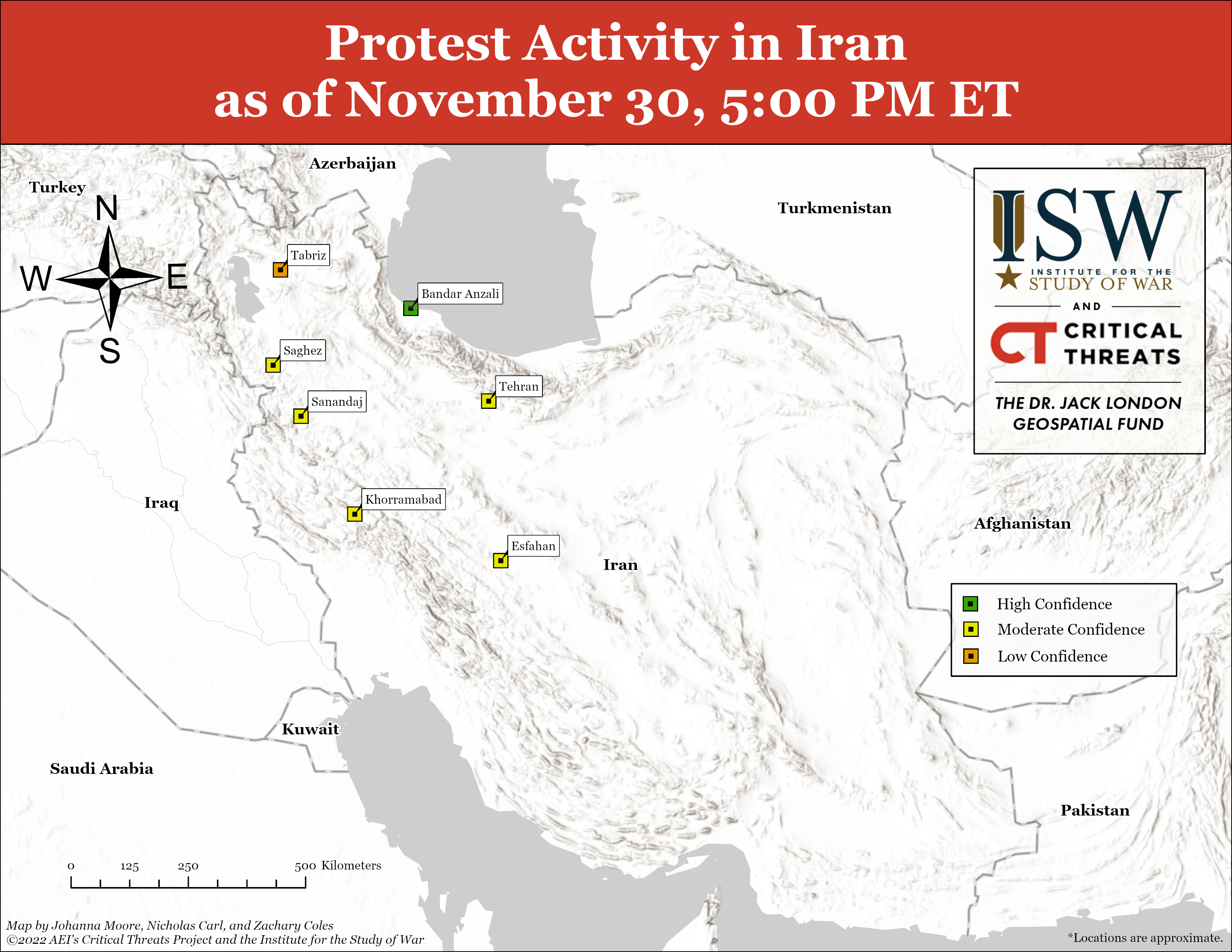 An Intelligence and Security Ministry member died due to an unspecified cause in Zabol, Sistan and Baluchistan Province on November 30.[25] Anti-regime militants commonly operate around Zabol and may have killed the intelligence officer. Over 60 security personnel have died since the protests began on September 16.[26]

IRGC Deputy Commander Brigadier General Ali Fadavi stated on November 30 that many of Iran’s problems are due to unspecified officials not properly following the orders of Supreme Leader Ali Khamenei.[27] Fadavi may have been criticizing regime officials who have less enthusiastically supported the regime protest crackdown in his remarks. Fadavi expressed implicit support for the regime using greater brutality in its crackdown on November 21, as CTP previously reported.[28]