Unconfirmed reports suggest that the Iranian regime is amassing military and security forces in Kurdistan Province to violently suppress protests and possibly also to conduct a ground operation into Iraqi Kurdistan.[1] Social media rumors reported on October 10 that the Islamic Revolutionary Guards Corps (IRGC) and Law Enforcement Command (LEC) have transferred forces from Hamedan, Yazd, and elsewhere to Sanandaj, where the regime is conducting a brutal crackdown.[2] Anti-regime outlet IranWire and a UK-based Sky News journalist reported that the regime is concentrating forces in Kurdistan Province.[3]

CTP cannot verify these reports and advises caution when evaluating these reports in light of the many, often-conflicting, information operations being conducted by the regime and its opponents.

Violent clashes between protesters and state security services in Kurdistan Province occurred on October 10 and 11.[4] Social media observers described Sanandaj as a “war zone,” a description that coheres with available pictures and videos of the clashes.[5]

The regime may use forces concentrated in the border region to conduct a ground incursion into Iraqi Kurdistan against anti-regime Kurdish militant groups. Iranian political and security officials have repeatedly accused these groups of coopting and stoking the protests against the regime. Interior Minister Ahmad Vahidi reiterated this accusation on October 11.[6] The IRGC conducted daily artillery, drone, and missile attacks against anti-regime Kurdish militant positions in Iraqi Kurdistan from September 26 to October 7.[7] A Telegram channel run by Iranian proxies in Iraq posted on October 11 that the IRGC is conducting a ground incursion but quickly deleted the post.[8]

The concentration of security forces in Kurdistan Province could exacerbate Iranian security forces’ bandwidth issues—a key vulnerability in the regime’s internal security apparatus. The regime relies on a small number select, highly ideological units from the IRGC, Basij, and LEC to crack down on unrest and thus does not have enough manpower to cover the entire country.[9] The regime shuffles its forces to where they are needed most—typically the restive border regions—when protests erupt.[10]

Simultaneous protests in the border areas and major cities strain these forces—a vulnerability that protesters and other anti-regime groups may seek to exploit. Anti-regime, Persian-language social media accounts have called for protester solidarity with the demonstrators in Sanandaj and Zahedan.[11] Deadly clashes erupted between protesters and security forces in Zahedan on September 30.[12]

Unobserved indications that the security forces are experiencing bandwidth issues include:

Anti-regime protests continued in at least 16 cities in 11 provinces on October 11 and could expand in the days ahead. English- and Persian-language social media accounts have called for protests across Iran on October 12 and 13.[13] Protesters have already demonstrated that they can coordinate large-scale demonstrations and may again succeed in doing so in the coming days. 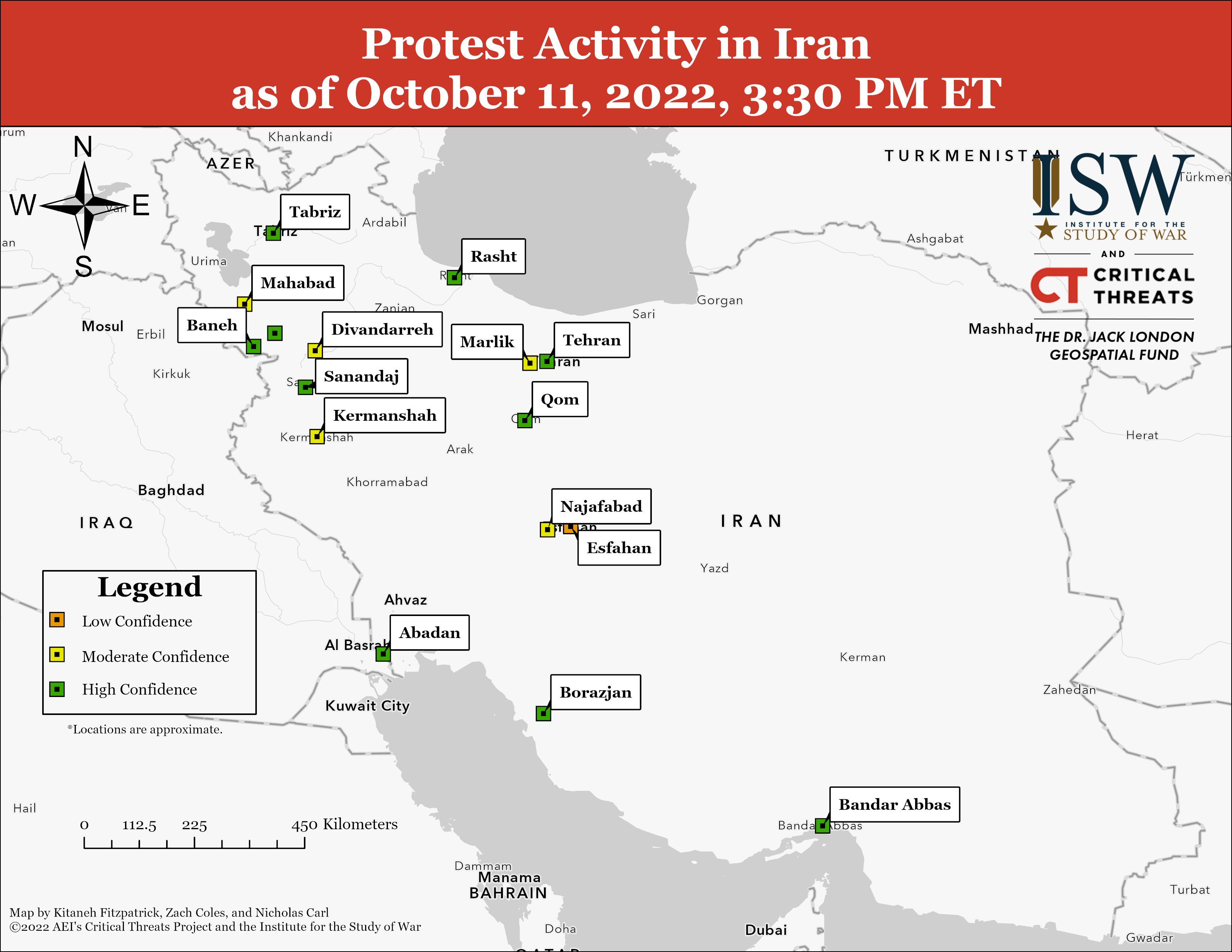 Interior Minister Ahmad Vahidi met with senior provincial officials in Kurdistan Province as the regime struggles to contain unrest in Sanandaj, Kurdistan Province.[18] Iranian security forces’ use of lethal force against protestors in Sanandaj has failed to curtail further demonstrations.[19] Footage circulating on social media allegedly captured security forces running away from protestors on October 11.[20] CTP cannot verify this footage. Vahidi warned Iranian youth against overthrowing the Islamic Republic—reflecting that the regime recognizes the revolutionary nature of these protests and the threat it may pose.[21]

President Ebrahim Raisi held a phone call with the family of a Basij member killed in protests in Tehran.[22] Raisi praised the Basij members’ sacrifice and service in the call. This phone call is especially tone deaf given that Raisi has expressed little to no sympathy for the protesters. Raisi is likely messaging internal regime audiences rather than the protesters. He likely seeks to reaffirm his commitment to the security establishment and its leaders, who will play a critical role in choosing the next supreme leader. He also likely sought to signal support for the low-level security personnel who are reportedly experiencing exhaustion and low morale.[23]

The Iraqi parliament plans to select a president during its upcoming October 13 session, and Iraqi nationalist and anti-corruption protesters may hold renewed anti-Iran demonstrations in response. Iraqi Parliament Speaker Mohamed al Halbousi announced during an October 11 parliamentary session that parliamentarians will reconvene for a session on October 13 to vote on a new Iraqi president.[24] Iraqi anti-corruption Tishreen movement protesters and supporters of Iraqi nationalist Shia cleric Moqtada al Sadr may play up anti-Iran sentiments—intensified by IRGC attacks into Iraqi Kurdistan and the Iranian regime‘s extreme mishandling of the protests—to prevent progress on government formation.

[8] Data can be provided upon request.