Anti-regime protests have subsided in extent and scale in recent days but may increase on October 20 and 26. Many instances of recent protest activity include fewer than 20 demonstrators and therefore do not meet CTP’s threshold for reporting. The Tehran Neighborhood Youth called for protests on October 22 and October 26, the latter being the 40th day since the Iranian morality patrol killed Mahsa Amini.[1] Iranians commonly hold a commemoration on the 40th day after a person’s death. Protest organizations may seek to use the 40th-day commemoration to reignite widespread demonstrations.

The Islamic Revolutionary Guards Corps (IRGC) continued to threaten Azerbaijan militarily for allegedly hosting Israeli intelligence agents on October 19. The IRGC Ground Forces constructed a bridge over the Aras River near the Iran-Azerbaijan border at the end of its three-day military exercise, which began on October 17.[2] IRGC armored and engineering elements crossed the bridge.[3] CTP cannot assess whether IRGC forces entered Azerbaijani territory because the exact location of the exercise is unclear. The IRGC likely sought to use the exercise to signal its capability to attack Azerbaijan and strike targets in Azerbaijani territory, however. CTP previously reported that Iranian officials and state media assert that Israel is using Azerbaijan as an intelligence base to instigate protests.[4] Tensions between Iran and Azerbaijan have flared over Armenia in recent months, which also likely informed the regime decision to conduct the exercise.[5] 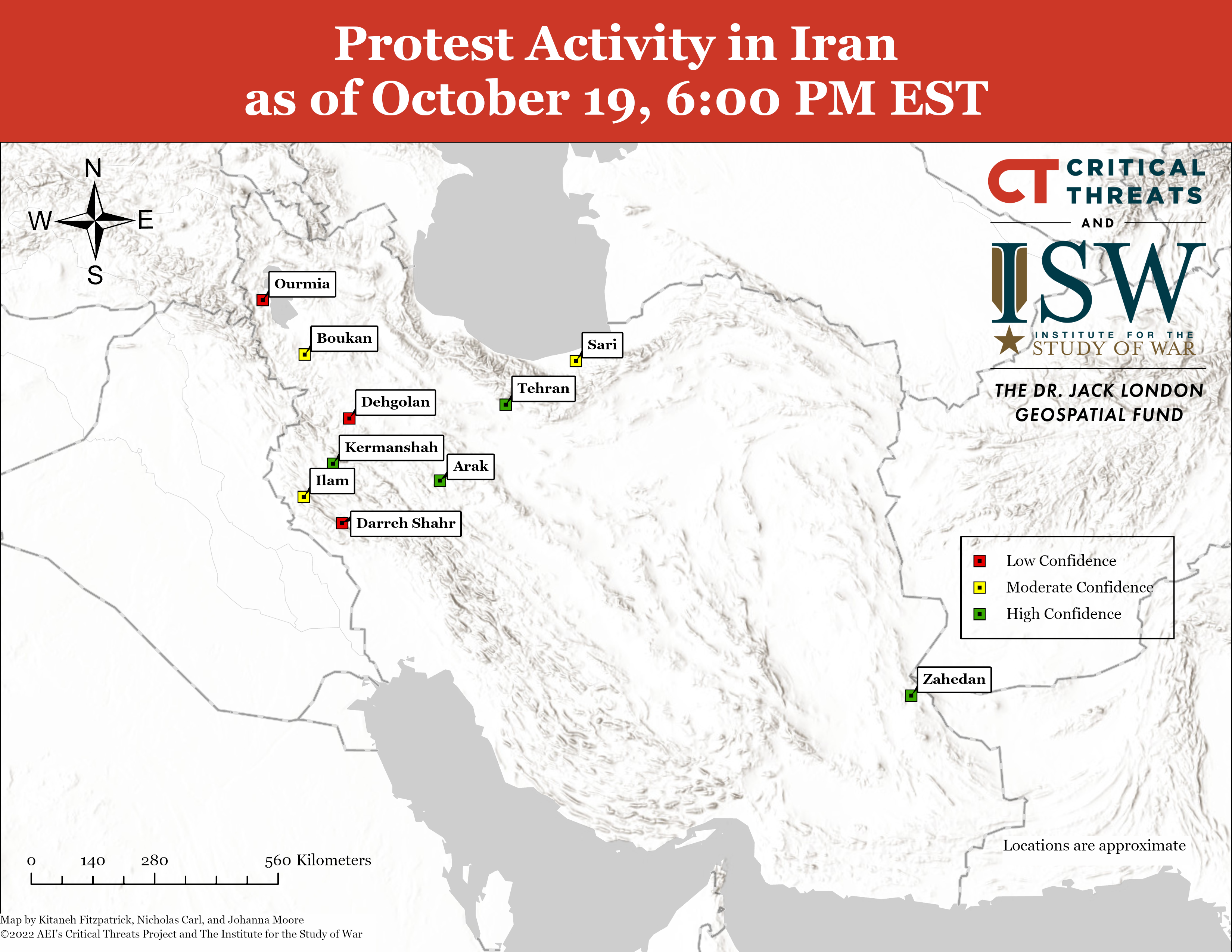 Supreme Leader Ali Khamenei praised Iranian academics in a meeting with university science faculty and students on October 19.[16] Khamenei described universities as a “key pillar” of the Islamic Republic and a fundamental challenge to Iran’s adversaries. Khamenei dismissed Western reporting that ongoing unrest would collapse the regime. Khamenei did not make any other reference to the protests.

Iranian sport climber Elnaz Rekabi returned to Iran after competing in the International Federate of Sport Climbing Asian Championships in South Korea without a wearing a headscarf on October 16.[20] The Islamic Republic requires female Iranian athletes to remain veiled in international athletic competitions.[21] BBC Persian reported that Iranian authorities seized Rekabi’s passport and telephone on October 18.[22] Hundreds gathered at the Imam Khomeini international airport cheering for Rekabi as she landed in Tehran on October 19.[23] Rekabi claimed she did not intentionally compete without a veil during an interview with state media.[24] Many social media users have compared the interview to a forced confession.[25] Sports Minister Hamid Sajjadi stated that his ministry would investigate the incident on October 19.[26] Rekabi could become an emblem of courageous defiance around which protestors rally in the coming days.

There was nothing significant to report.