Anti-regime protests are continuing in at least 10 major cities in eight provinces and escalated violently in southeastern Sistan and Baluchistan Province on September 30. Protesters clashed with security forces in Zahedan, Sistan and Baluchistan Province, attacking local police stations and killing the provincial head of Islamic Revolutionary Guards Corps (IRGC) intelligence.[1] Social media users suggested that state security services deployed helicopters to abet their crackdown.[2] These clashes are among the most violent in the ongoing protest wave thus far.

The security situation around Zahedan could worsen in the coming days and weeks, straining state security services more than they already are. Anti-regime militancy is common around Zahedan, where Salafi-jihadi groups such as Jaish al Adl operate. An Iranian Baluch militant group, Anonymous Tigers of Baluchistan, reportedly released a video on September 30 threatening to escalate further against the regime in response to the clashes on September 30.[3] State security services have struggled with bandwidth constraints and exhaustion throughout Iran during the ongoing, countrywide protests, and escalations around Zahedan will impose additional pressure.

A senior Iranian military official, Major General Mohammad Bagheri, threatened to attack US forces in Iraq in retaliation for the US shootdown of an Iranian drone illegally operating in Iraqi airspace near an American military base.[4] Bagheri also suggested that Iran would attack US bases in Iraq for supporting anti-regime Kurdish groups. The IRGC has conducted six consecutive days of attacks on anti-regime Kurdish militants in Iraqi Kurdistan.[5] Bagheri accused the US of using its Harir airbase in Erbil Province to coordinate with and support these groups in September 2021.[6] Iranian proxies in Iraq accused Omar Mahmoudzadeh, the American whom the IRGC killed in Iraqi Kurdistan on September 28, of training anti-regime Kurdish militants.[7]

President Ebrahim Raisi gave a speech in Tehran to commemorate the National Firefighting Day.[10] Raisi made no noteworthy remarks on supreme leader succession or the ongoing anti-regime protests.

The ongoing, anti-regime protests occurred in at least 10 Iranian cities in eight provinces and were especially violent in southeastern Sistan and Baluchistan Province on September 30. This is a moderate-to-high-confidence assessment. Iranian social media users documented unrest in: 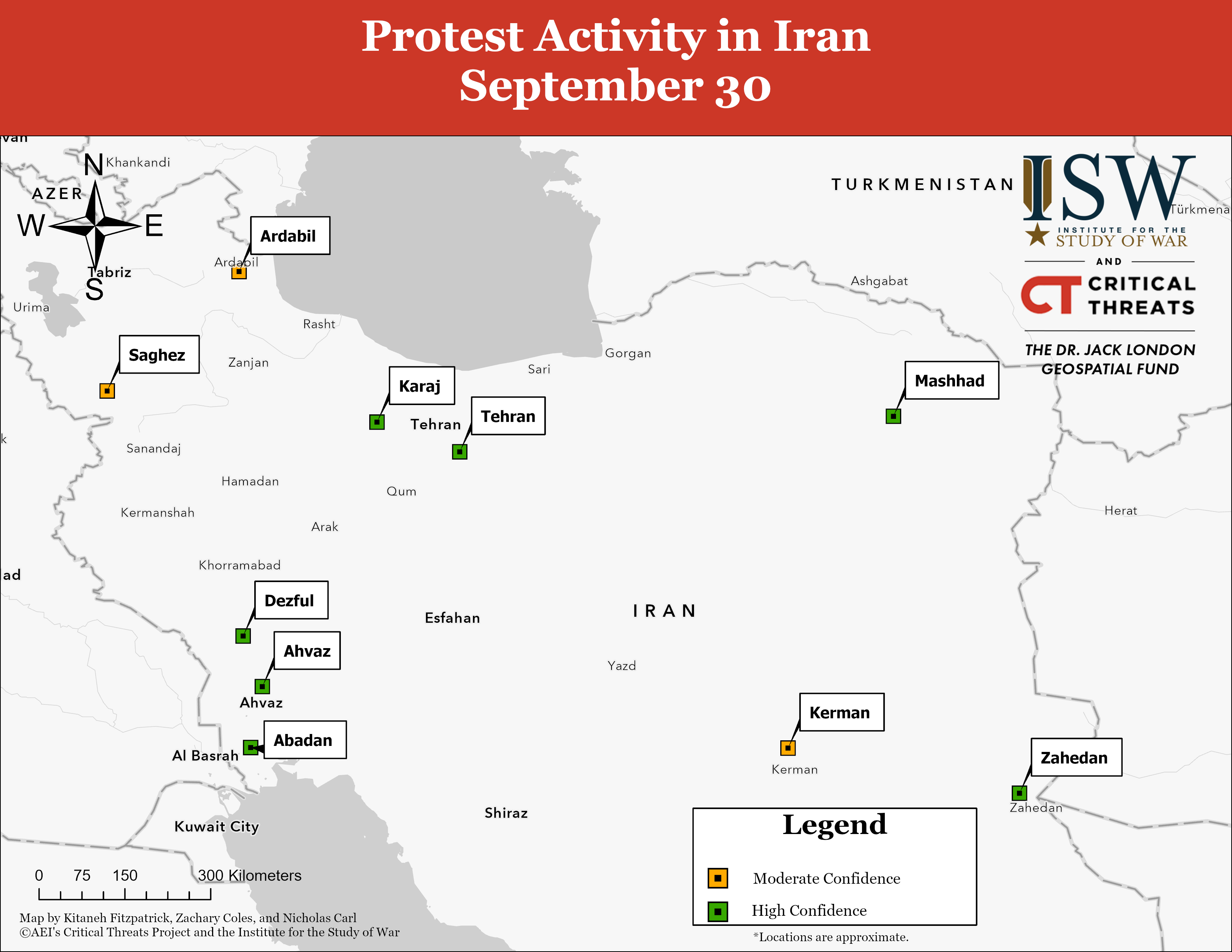 The regime reports that it has arrested over a thousand Iranian civilians since protests began on September 16. Iranian state-affiliated media outlets and officials have reported the arrest of over a thousand Iranians throughout the country in recent days, although the total number of arrests is likely significantly higher.[15] Social media users have circulated reports of increased arrests in recent days as well, although these numbers are difficult to corroborate amidst ongoing internet restrictions.[16] Iran’s Ministry of Intelligence and Security publicized the arrest of nine European nationals and dozens of purported opposition group members for their role in stoking nation-wide protests as the regime seeks to blame foreign actors for internal dissent.[17]

Iranian truckers have gone on strike, and their strikes could expand in the coming days. Iranian truckers have begun strikes to protest the regime crackdown.[18] Iranian trucker strikes have occurred in previous protests, notably 2018, and often spread rapidly. They pose a more serious threat to the regime than other labor-related movements because of their general economic effect and their widespread nature.[19] Iranian oil industry workers warned on September 26 that they will strike if the regime does not stop the crackdown.[20] Iranian rideshare drivers have stated that they will begin strikes on October 1.[21]

Unverified reports of dissent within the regime are circulating online.

Armed Forces General Staff Chief Major General Mohammad Bagheri, the most senior military official in Iran, threatened to attack the US on September 30.[25] Bagheri threatened to retaliate for the US downing of an Iranian Mohajer-6 drone on September 28 and stated that Iran will attack any US bases in Iraq that threaten the regime. Bagheri claimed that the US downing of the Iranian drone was evidence that the US cooperates with anti-regime Kurdish groups in Iraqi Kurdistan. Bagheri in September 2021 accused the US of using its Harir airbase in Erbil Province to coordinate with and support anti-regime militants against Iran.[26] The Armed Forces General Staff, which Bagheri heads, is Iran’s highest military body and responsible for military policy and strategic guidance. Bagheri is an IRGC general and a member of the network of senior IRGC officials that has been largely controlling the Guards for decades.

Iran’s Iraqi proxies are simultaneously conducting a media campaign against Iraqi nationalist Shia cleric Moqtada al Sadr's Iraqi nationalist movement. The proxies aim to politically isolate Sadr’s followers, known as Sadrists, and blame them for Iraq’s political gridlock and the armed clashes in Baghdad on September 28.[29] The proxies may prioritize the anti-Sadrist media campaign and dilute their messaging that blames the US and anti-regime Kurdish militias for the protests.

Upcoming Sadrist and anti-corruption demonstrations may converge with solidarity protests against the Iranian regime. Iraqi demonstrators also held solidarity protests against the Iranian regime and set fire to Iranian flags on September 29 in Najaf, home to the most important Shia shrine.[34] The Sadrists seek to improve their bargaining position in Iraq’s ongoing government formation processes, and they may attempt to spread and tie anti-Iranian-regime sentiments to Iran’s Iraqi proxies. Anti-regime protests also may converge with upcoming demonstrations on the anniversary of Iraq’s October 2019 anti-corruption Tishreen movement. The movement coincided with similar anti-Iranian regime protests in Lebanon in October 2019 and in Iran in November 2019.