Russian occupation officials in Zaporizhia Oblast have obliquely declared the region’s independence from Ukraine by falsely identifying Ukrainian citizens entering the occupied region as temporary asylum seekers. Head of the Zaporizhia Oblast occupation administration Yevheny Balitsky signed an order that designates Ukrainian citizens arriving in occupied Zaporizhia Oblast as temporary asylum seekers based on Russian law.[1] The order requires the registration of Ukrainian and Russian citizens based on their place of residence or place of arrival in the Russian-occupied parts of Zaporizhia Oblast and requires the distribution of temporary identification forms for all “stateless persons.” Ukrainians and Russians may register if they present proof of their temporary asylum application. This decree has various implications under both international law and domestic Russian law. International law states that a refugee is an individual from outside the country (or who is stateless) who is seeking “temporary asylum” in another country to escape persecution.[2] Russian law defines a refugee as a person ”who is outside of his/her country of nationality or habitual residence.”[3] Neither of these statuses properly apply to the majority of people crossing from unoccupied Ukraine into occupied Zaporizhia. 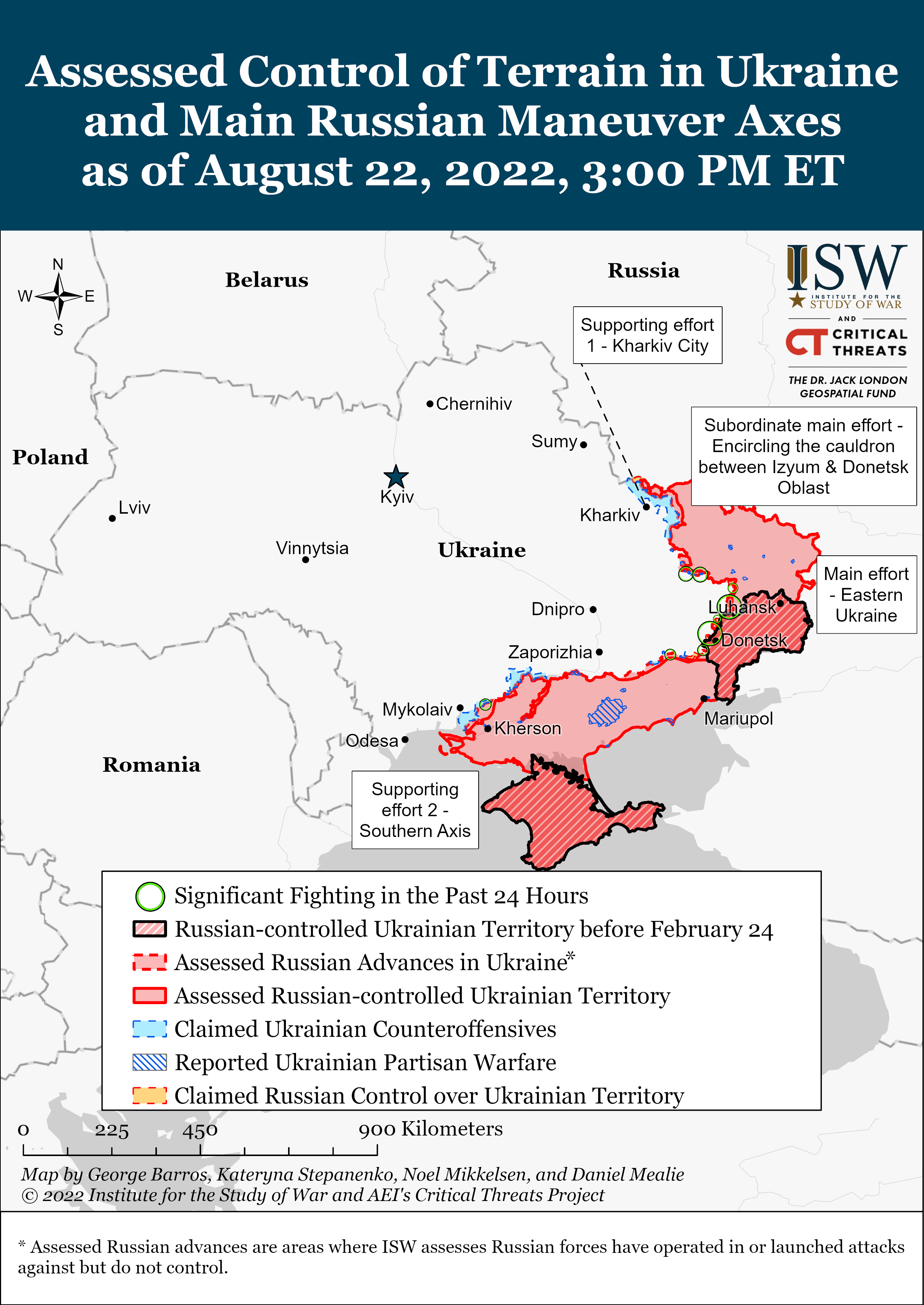 Russian forces conducted limited ground attacks southwest and southeast of Izyum near the Kharkiv-Donetsk Oblast border on August 22. Ukrainian sources reported that Russian troops attempted to advance on Dibrovne and Nova Dmytrivka—both within 25 km southwest of Izyum.[4] As ISW has previously assessed, Russian attacks southwest of Izyum are likely limited and localized spoiling attacks and not coherent attempts to advance in a specific direction.[5] The Ukrainian General Staff also stated that Russian forces conducted offensive operations in Krasnopillya, which lies between Izyum and Slovyansk along the E40 highway.[6] Russian forces continued to shell along the Izyum-Slovyansk line and struck economic infrastructure in Kramatorsk.[7]

Russian forces conducted several ground attacks southwest of Donetsk City near the Donetsk-Zaporizhia Oblast border on August 22. The Ukrainian General Staff stated that Russian troops fought near Novomykhailivka (25 km southwest of Donetsk City) and around Makarivka, Vremivka, and Velyka Novosilka, all in western Donetsk Oblast within 10 km of the Zaporizhia Oblast border.[20] Russian forces also continued efforts to cut Ukrainian lines of communication around Vuhledar and shelled Vuhledar and surrounding areas in order to gain access to the Vuhledar-Marinka road.[21] 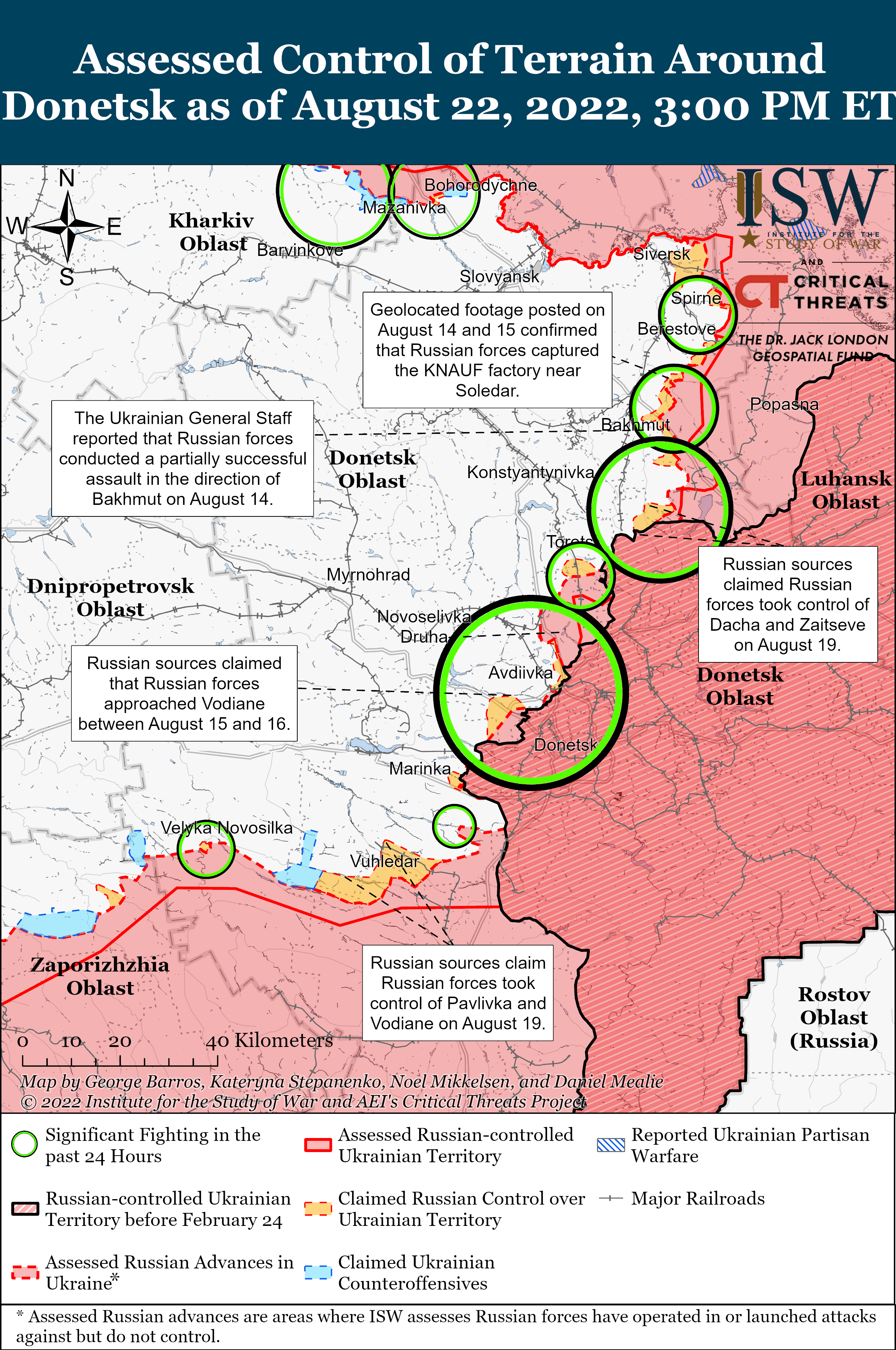 Russian forces did not make any confirmed territorial gains on August 22. The Ukrainian General Staff stated that Russian forces are attempting to improve their tactical positions around Kharkiv City in unspecified locations.[22] Geolocated footage shows Russian soldiers in Rubizhne on the right bank of the Pechenihy Reservoir, and Russian news outlet Izvestia reported on August 21 that Ukrainian forces maintain positions 500 m from Rubizhne.[23] Russian forces conducted airstrikes on Pytomnyk (15 km north of Kharkiv City) and Staryi Saltiv and Verkhnii Saltiv (both on the right bank of the  Pechenihy Reservoir).[24] Russian forces continued shelling and UAV reconnaissance throughout the line of contact.[25] 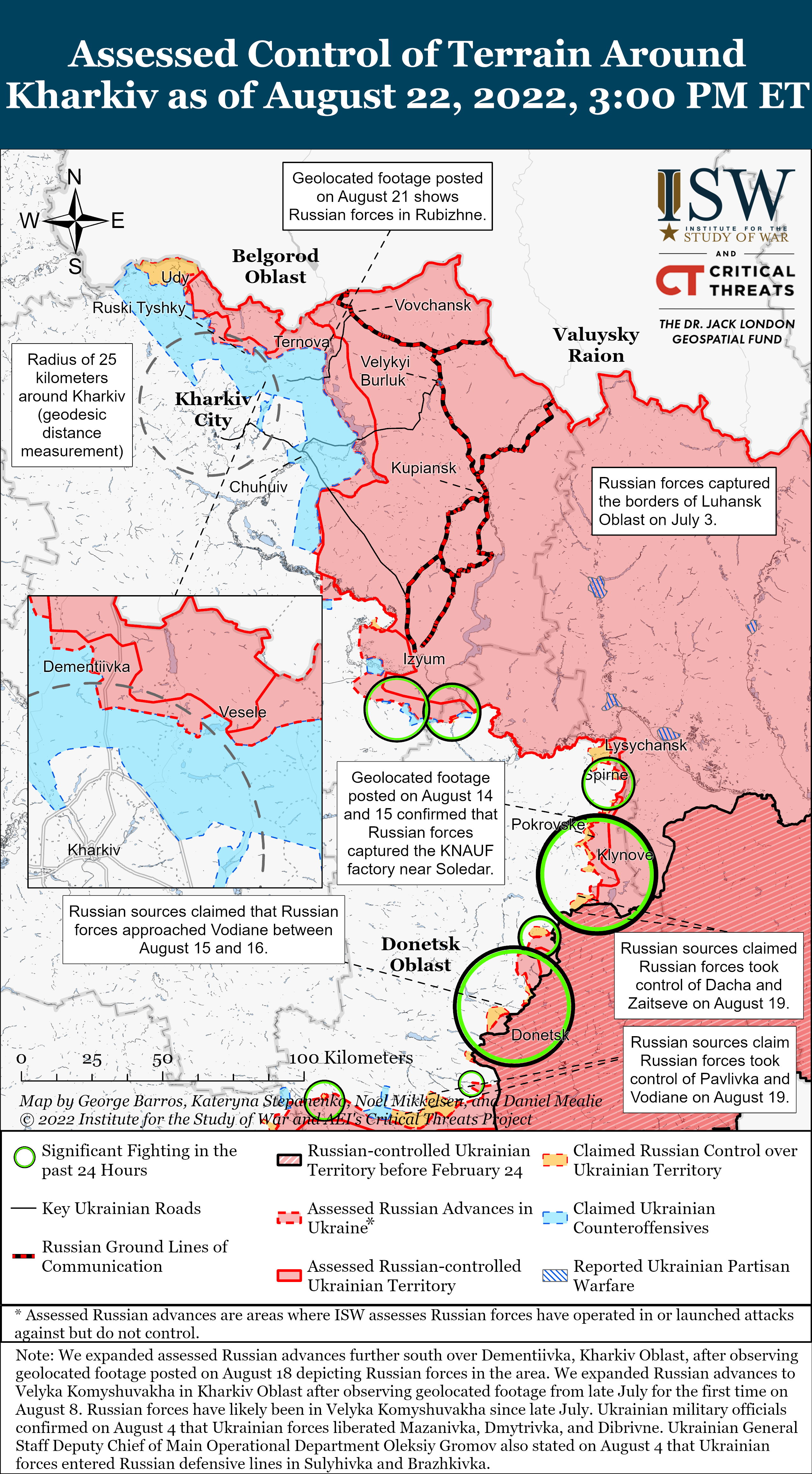 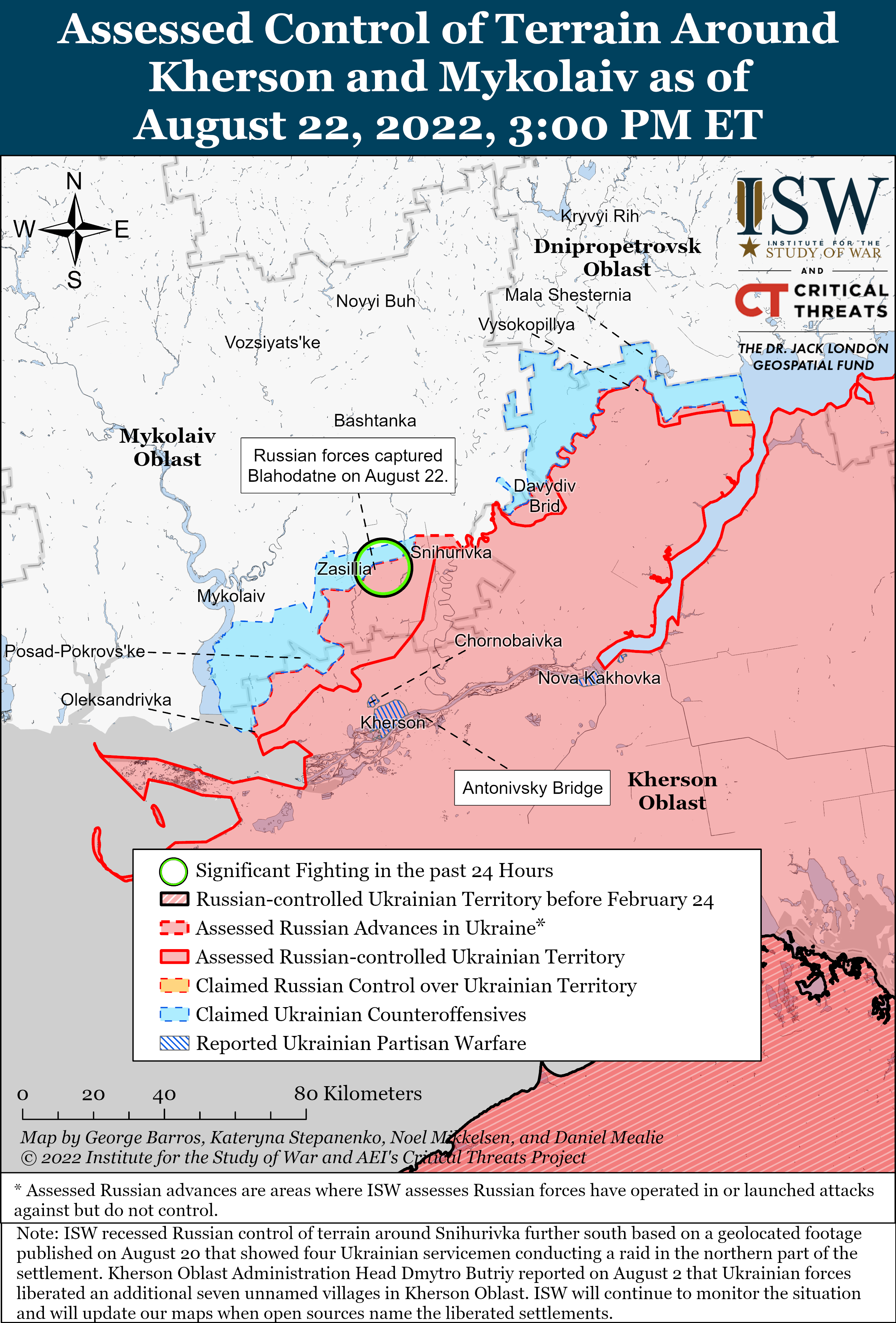 Ukrainian intelligence reported that the Luhansk People’s Republic (LNR) will begin “general mobilization” proceedings on September 1. The Ukrainian Main Military Intelligence Directorate (GUR) reported on August 22 that LNR Head Leonid Pasechnik announced the start of the first phase of general mobilization during a radiobroadcast in occupied Svatove, Luhansk Oblast.[45] The GUR noted that LNR officials will mobilize Ukrainian citizens who received Russian passports and satisfy military requirements during the first phase of the mobilization. The GUR also stated that the second phase will mobilize the rest of the male population aged 18 to 65. ISW could not locate the original radio broadcast in open sources and cannot independently verify this report. The LNR also claimed that it has not announced mobilization and is not engaged in covert mobilization on August 20.[46] The LNR previously announced a general mobilization on February 19 that conscripted all eligible men ages 18 to 55—both registered and not registered at the military recruitment centers—and reservists.[47] The LNR’s previous February mobilization also prohibited men from leaving the territory of occupied Luhansk Oblast and transitioned the economy to a wartime mode. Pasechnik previously claimed that the LNR ended its active mobilization periods in late March.[48]  Russian law allows the Russian military to activate both reservists and new conscripts during general mobilization, including those previously exempted from conscription.[49]

The GUR report, if true, could indicate that the LNR is unable to generate and motivate sufficient forces to continue fighting in Donetsk Oblast via recruitment drives or covert mobilization. The GUR previously reported that Russian forces are planning to call up 8,000 people from occupied territories in Ukraine.[50] Ukrainian officials have consistently reported that LNR authorities abduct men off the streets and even commit Russian mine workers to the frontlines.[51]

Russian federal subjects (regions) continued to form new volunteer units and recruit volunteers for Russian security services. Prymorsky Krai announced the formation of a new repair and service “Arsenievskiy” Volunteer Battalion on August 22.[52] The battalion will focus on evacuating damaged military equipment, repairing damaged equipment, and returning refurbished equipment to the frontlines. Kremlin-affiliated outlet Kommersant reported that the battalion had already recruited 140 out of 280 planned volunteers as of August 22.[53] Prymorsky Krai offered recruits ages 18 to 60 a one-time enlistment bonus of 300,000 rubles (about $4,980) and monthly salaries of 200,000 rubles (about $3,320). ISW has previously reported that Primorsky Krai is forming a naval infantry volunteer battalion “Tigr,” but only offered 150,000 rubles (about $2,490) as a one-time enlistment bonus.[54] The Republic of Buryatia increased its one-time enlistment bonus to 200,000 rubles (about $3,320) instead of the originally promised 100,000 (about $1,660).[55] ISW has previously reported that Republic of Tatarstan also increased its one-time recruitment bonus, and it is likely that these republics are increasing their enlistment bonuses due to lack of recruits.[56]

The Kremlin likely ordered authorities of the Russian federal subjects to increase their advertisement of contract military service. Novosibirsk Mayor Anatoliy Lokot recorded a video encouraging locals to enlist in the Russian armed forces and posted the official recruitment announcement on the mayor’s official website.[57] Novosibirsk outlet NGS.RU also reported that local officials distributed contract service ads to apartment building entrances throughout the city and posted identical recruitment information in different social media groups.[58] Tatarstan State Council Parliamentarian from the Russian Communist Party, Nikolay Atlasov, published an opinion piece discussing the linguistic benefits of volunteer battalions that are composed of ethnic personnel.[59] Atlasov’s op-ed simultaneously advertised volunteer battalions that are currently forming in the ethnic republics of Chuvashia, Sakha (Yukutia), and Tatarstan. The Kremlin’s aggressive advertisement campaign for contract service might generate some pushback from locals, as it significantly differs from the Russian portrayal of the war in Ukraine as a short-term ”special military operation.”[60] 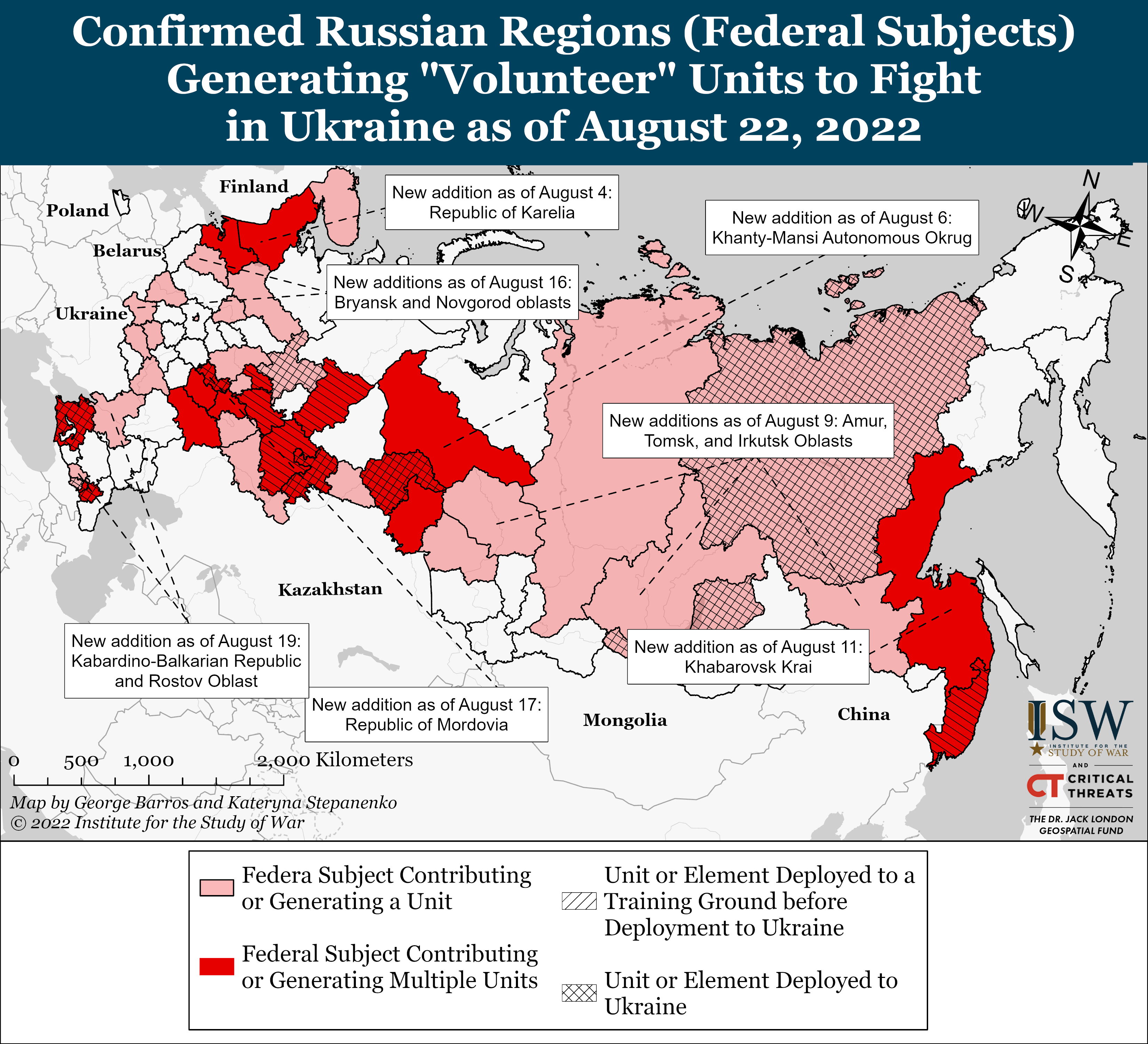 Ukrainian civilians attacked a Russian soldier in occupied Melitopol overnight on August 21-22. Footage of the aftermath shows Russian soldiers carrying an injured soldier on a stretcher away from a crowd on the street.[61] Ukraine's Resistance Center reported that Ukrainian partisans attacked a Russian soldier who harassed an underage girl but did not specify the method or result of the attack.[62] Ukrainian sources also reported explosions and gunfire throughout Melitopol overnight on August 21-22.[63] Ukraine's Resistance Center reported that Ukrainian resistance activity is actively inhibiting occupation authorities’ efforts to set conditions for a referendum in Kherson Oblast, causing unspecified preparation efforts in Henichensk, Kherson Oblast to fail.[64]