Intensifying Russian pressure on Belarus is degrading Belarusian President Alexander Lukashenko’s maneuver room to avoid making concessions to the Kremlin. Russian President Vladimir Putin’s long game to reestablish suzerainty over Belarus is making progress separate and apart from Putin’s efforts to get Belarus more actively involved in his invasion of Ukraine. Lukashenko confirmed that Russia “gave” Belarus an unspecified number of S-400 air defense systems during his meeting with Putin in Minsk on December 19, confirming ISW’s 2021 forecast that Russian-made S-400 systems would begin operating in Belarus.[1] Lukashenko had previously rejected S-400 systems operating in Belarus in 2020.[2] Lukashenko is likely delaying acceding to Putin’s larger demands - such as committing Belarusian forces to join the invasion against Ukraine - by making smaller concessions that he has stonewalled for years.

ISW continues to observe indicators consistent with the most dangerous course of action (MDCOA) of a renewed Russian invasion of northern Ukraine from Belarus.[4] Ukrainian military officials continue to warn about a growing Russian threat from Belarus. Ukrainian Joint Forces Commander Serhiy Nayev stated on December 20 that Russian elements in Belarus have military potential “currently sufficient” to create an unspecified threat to Ukraine and that these elements can conduct unspecified “tactical actions.”[5] Nayev’s statement marks an inflection in Ukrainian officials’ characterization of the growing Russian forces in Belarus; previous Ukrainian descriptions of Russian forces in Belarus did not ascribe to them tactically significant capacities.[6] Independent Belarusian sources continue to report growing Russian mechanized forces in Belarus.[7] About 30 Russian T-80 tanks were reportedly deployed to Belarus around December 20.[8]

These indicators support the MDCOA forecast, but that course of action remains unlikely at this time. A Russian invasion of northern Ukraine from Belarus is not very likely imminent. Nayev reiterated that Ukraine’s defense is prepared to defend northern Ukraine.[9] The Ukrainian General Staff reiterated that it has not observed Russian forces forming strike groups in Belarus as of December 20.[10] ISW will continue to monitor the situation.

Ukrainian President Volodymyr Zelensky’s frontline visit to Bakhmut on the 300th day of war is undermining an ongoing Kremlin information operation intended to present Russian President Vladimir Putin as an involved war leader. Zelensky made a surprise visit to Ukrainian troops serving on the intense Bakhmut front on December 20 and presented awards.[11] In contrast, Putin held a senior-level award ceremony where he celebrated Russian occupation and Kremlin officials such as proxy leaders from occupied Donetsk, Luhansk, Kherson, and Zaporizhia oblasts, Russian propagandist and RT Editor-in-Chief Margarita Simonyan, and Russian milblogger Semyon Pegov among other state officials.[12] ISW has previously assessed that Putin has intensified his efforts to extricate himself and the Russian Ministry of Defense (MoD) from persistent criticism by making public appearances relating to various undertakings aimed at improving the Russian war effort. This award ceremony further indicates Putin‘s fixation with presenting himself as an involved wartime leader.[13] Putin likely seeks to deflect blame for Russian military failures in Ukraine by maintaining a façade that paints Putin in a positive light but absolves him of responsibility for the war.

Putin’s decision to award members of his circle who have not even been directly involved in fighting in contrast with Zelensky’s visit near the front lines in Bakhmut sparked some criticism among Russian nationalist voices. A former Russian militant commander and critical voice in the Russian information space, Igor Girkin, noted that Putin is awarding “his heroes in the Kremlin” but not Russian and proxy servicemen who are engaged in combat on the frontlines.[14] Other milbloggers speculated that the Kremlin made a secretive political decision for a Russian ceasefire, allowing Zelensky to walk around Bakhmut.[15] Another milblogger reiterated that Putin had not visited the occupied territories and stated that Russian forces would not be able to effectively conduct a precision strike in time against Zelensky.[16]Zelensky’s visit to Bakhmut upstaged Putin’s efforts to establish himself as a wartime commander-in-chief and turned Putin’s own information operation into an embarrassment even within parts of the pro-war Russian information space.

Wagner financier Yevgeniy Prigozhin further undermined Putin, possibly inadvertently, within the Russian information space by attempting to boost his standing against the backdrop of Zelensky’s visit to Bakhmut. Prigozhin published a series of videos claiming he arrived at the frontlines near Bakhmut to speak to Zelensky regarding the control of territories in the area.[17] Prigozhin’s “offers” to negotiate with Zelensky are neither serious nor authoritative, since he does not hold any official position in Russia. Prigozhin, however, continues to pose as a prominent political and military figure in Russia. Such farcical comments are likely a response to Zelensky‘s repeated offers to negotiate directly with Putin after Russia withdraws its forces from Ukraine. Prigozhin’s appearance on the frontline further weakens Putin’s presentation of himself as a wartime leader, since Putin has not even visited Russian-occupied territories, let alone gone anywhere near the front lines. Social media users additionally exposed that Russian Defense Minister Sergey Shoigu did not actually visit the frontlines on December 17 - as he claimed - by geolocating the videos the Russian MoD posted of Shoigu‘s trip in Armyansk, Crimea.[18] While Prigozhin did not directly criticize Putin for his inability to directly address Zelensky or arrive on the frontlines, his and Zelensky’s visits to the frontlines threaten to make Putin’s posing as a wartime commander in chief humiliating rather than effective.

The Kremlin’s efforts to improve the reputation of the Russian MoD may have prompted Prigozhin to double down on his efforts to legalize Wagner in Russia. Russian state media outlet RT – likely affiliated with Wagner - published a 10-minute report on Wagner describing Prigozhin’s establishment of the paramilitary organization as an attempt to support “Russian interests” and defend the “Russian world.”[19] Such a portrayal suggests that Prigozhin is trying to rid Wagner of the mercenary stigma and instead re-introduce the group as a legitimate military formation in Russia that supports Russian national interests. RT also introduced prominent Kremlin officials like the Chairman of the Fair Russia - For Truth Party Sergey Mirnonov who criticized the Russian government for not seizing the initiative to recognize Wagner troops’ ”heroism” in Ukraine or granting Wagner official status under Russian law. Private military companies such as Wagner are notably illegal in Russia.  The RT report also supported a long-standing ISW assessment that Prigozhin is strategically growing his influence on the Russian internet, noting that the newly-opened Wagner Center in St. Petersburg is a working space for “patriotic” media outlets and bloggers to resist the information war against Russia. Prigozhin will likely continue his efforts to establish himself and his Wagner Group in Russia by promoting himself on Telegram and Wagner-affiliated media, which may further diminish the Kremlin’s attempts to minimize criticism of its defense leadership.

The Kremlin will likely continue efforts to portray Putin and the Russian Ministry of Defense (MoD) as effective leaders of the war in Ukraine when Putin holds the Russian MoD board meeting on December 21. The Kremlin press service announced on December 20 that Putin will hold an expanded version of the Russian MoD board meeting on December 21, which will reportedly include a summary of the activities of the Russian Armed Forces in 2022 and a setting of tasks for the Russian military in 2023.[20] The Kremlin press service announced that Russian Defense Minister Shoigu will deliver the main report on the progress of the “special military operation” in Ukraine at the meeting.[21] The Kremlin press service stated that the commanders of military districts and services of the Russian Armed Forces, the heads of central military authorities, and representatives of federal executive bodies will attend the expanded meeting.[22] The Kremlin press service also stated that 15,000 Russian military officials will attend the meeting via video conference.[23]  Putin is likely holding a larger-than-usual Russian MoD board meeting to present the Russian military as an organized and formidable fighting force and to demonstrate that his control over that force remains unquestioned despite its pronounced military failures in its invasion of Ukraine. Shoigu will likely deliver a main report on the war in Ukraine that minimizes the Russian MoD’s responsibility for failures at the front and offers an optimistic forecast for what Russian forces will be able to achieve operationally in Ukraine in 2023. The Kremlin will likely publicize aspects of the event to augment the Kremlin’s continuing efforts to present Putin and the Russian MoD as competent managers of the war in Ukraine and to shield Putin and the Russian MoD from the criticism of the ultra-nationalist pro-war community.[24] The event shows that Putin is taking increasing pains to surround himself with military uniforms, possibly hoping to evoke recollections of Joseph Stalin engaging with the Soviet STAVKA during World War II and to separate himself from the famous pictures of Putin separated by a very long table from Shoigu and Chief of the General Staff General Valery Gerasimov. 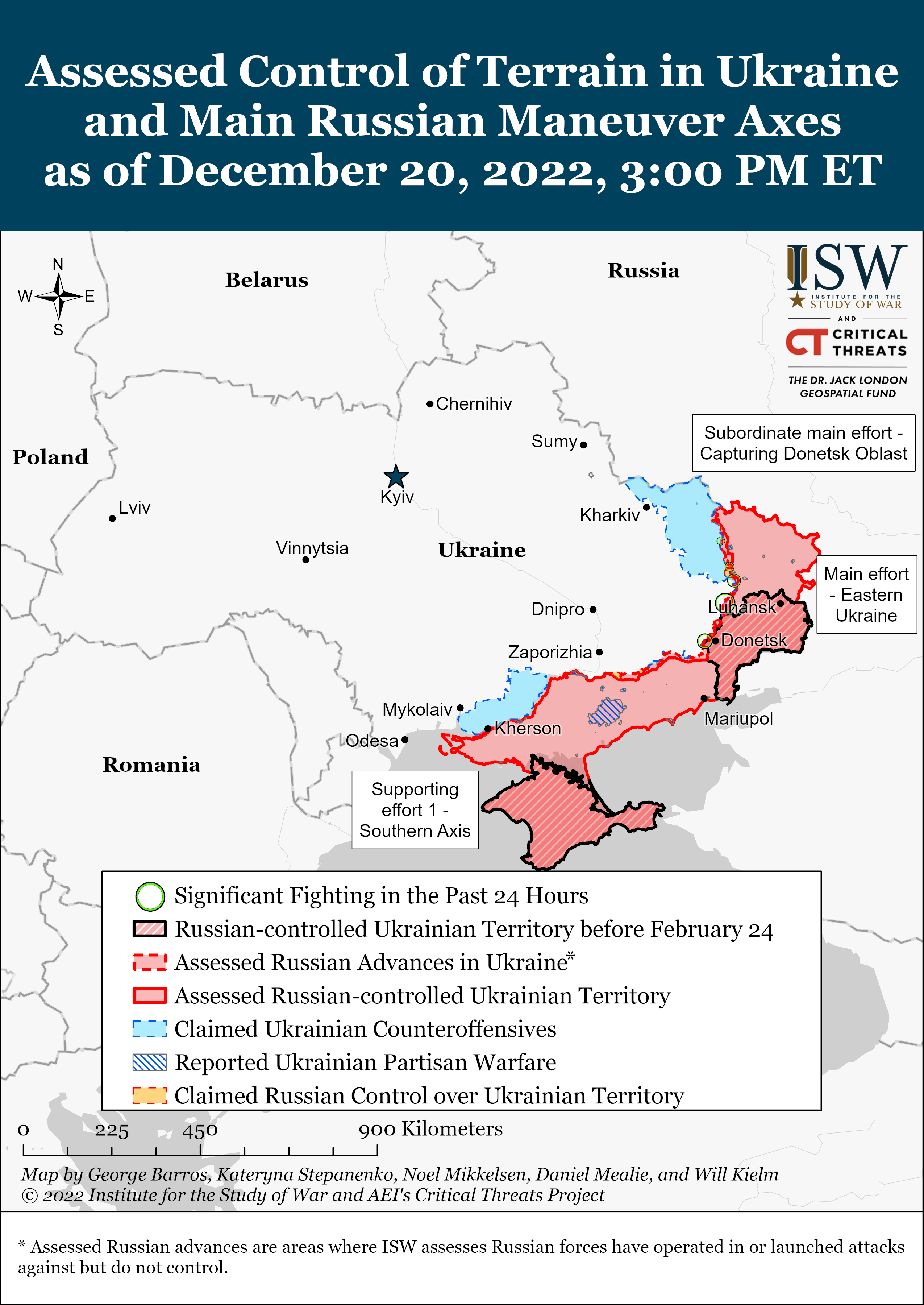 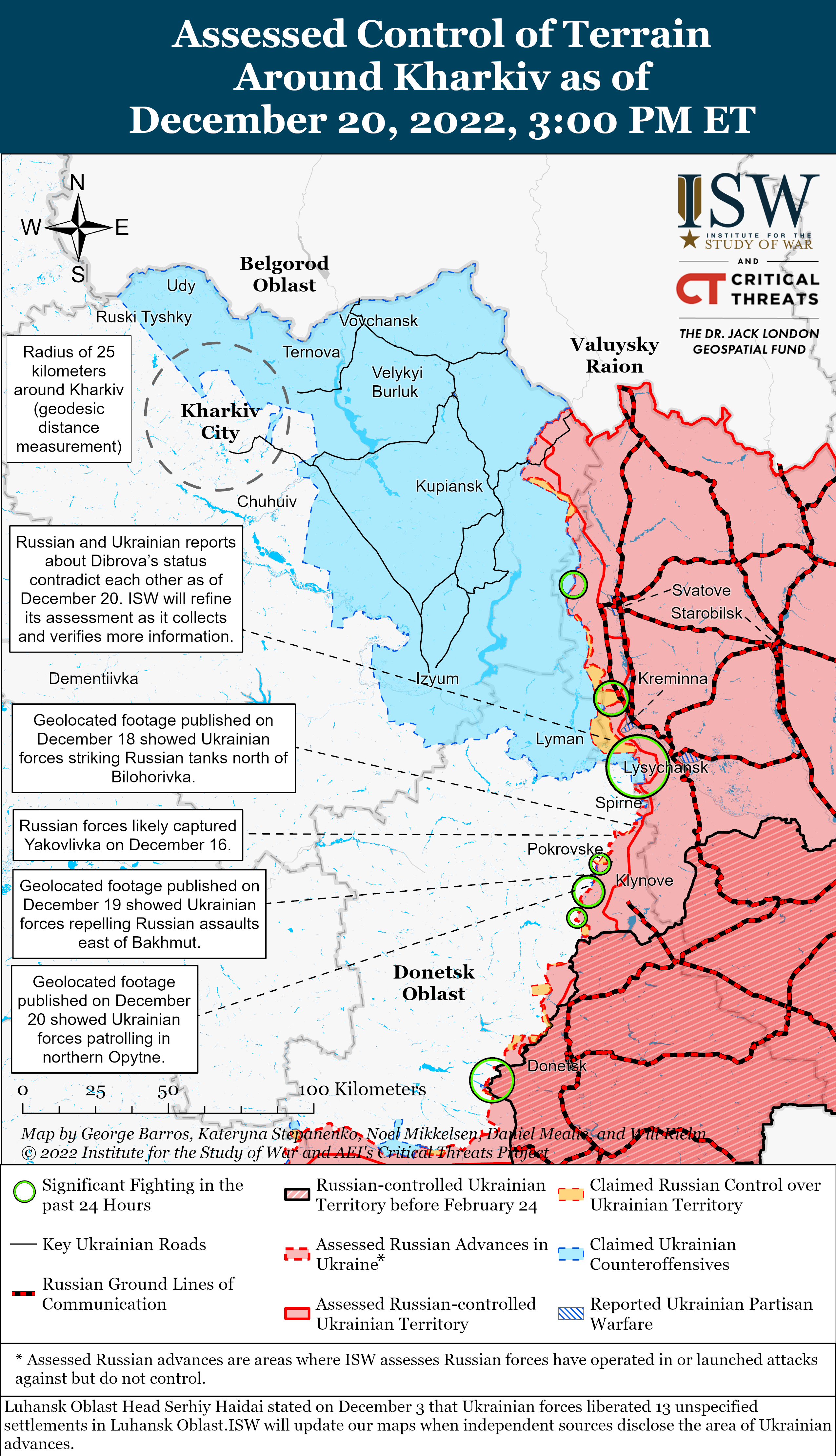 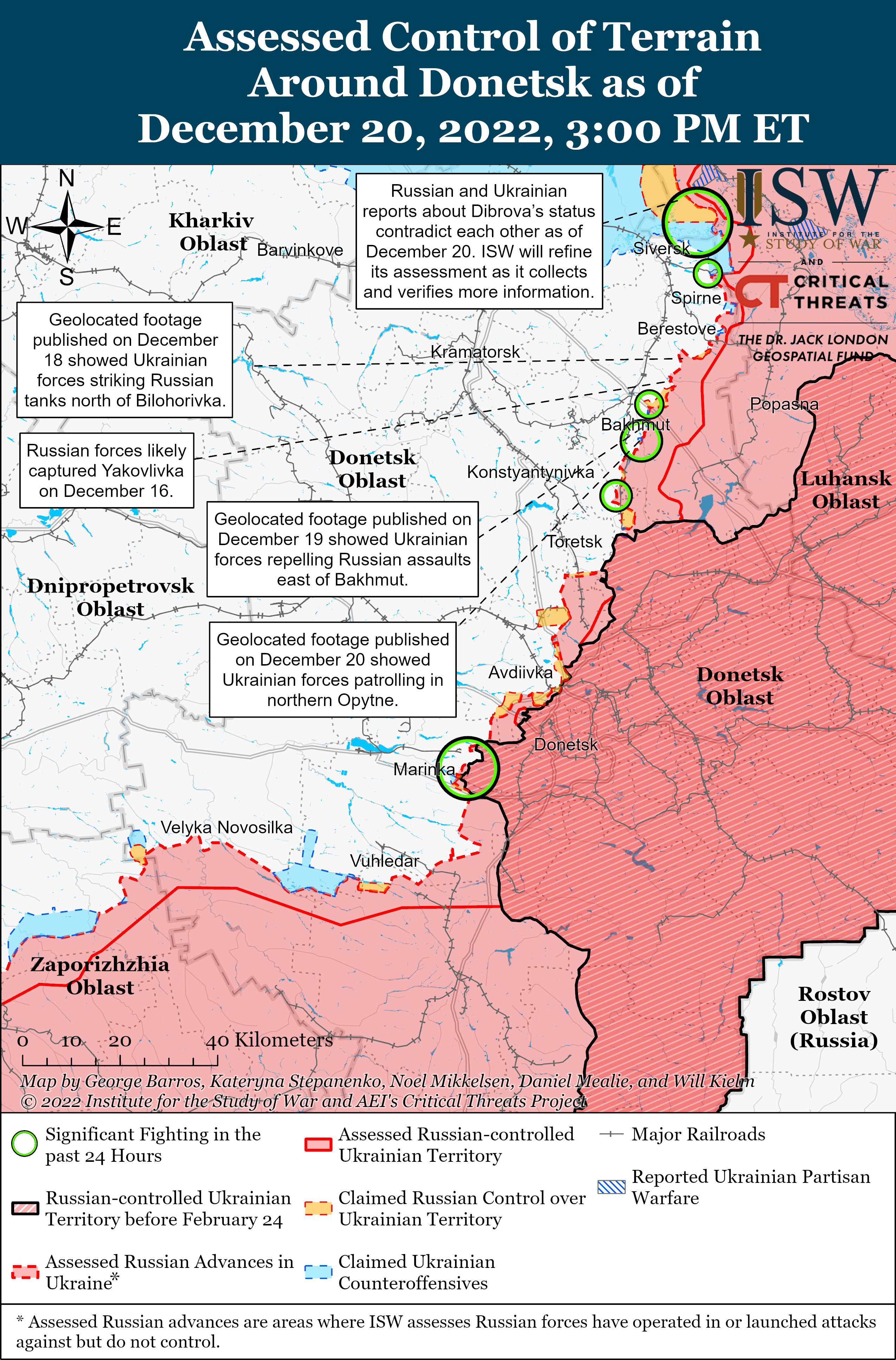 Russian outlets published a video showing a Russian truck exploding on the Crimean Isthmus near Chongar Peninsula in Kherson Oblast, but Russian sources did not comment on the cause of the explosion.[50] 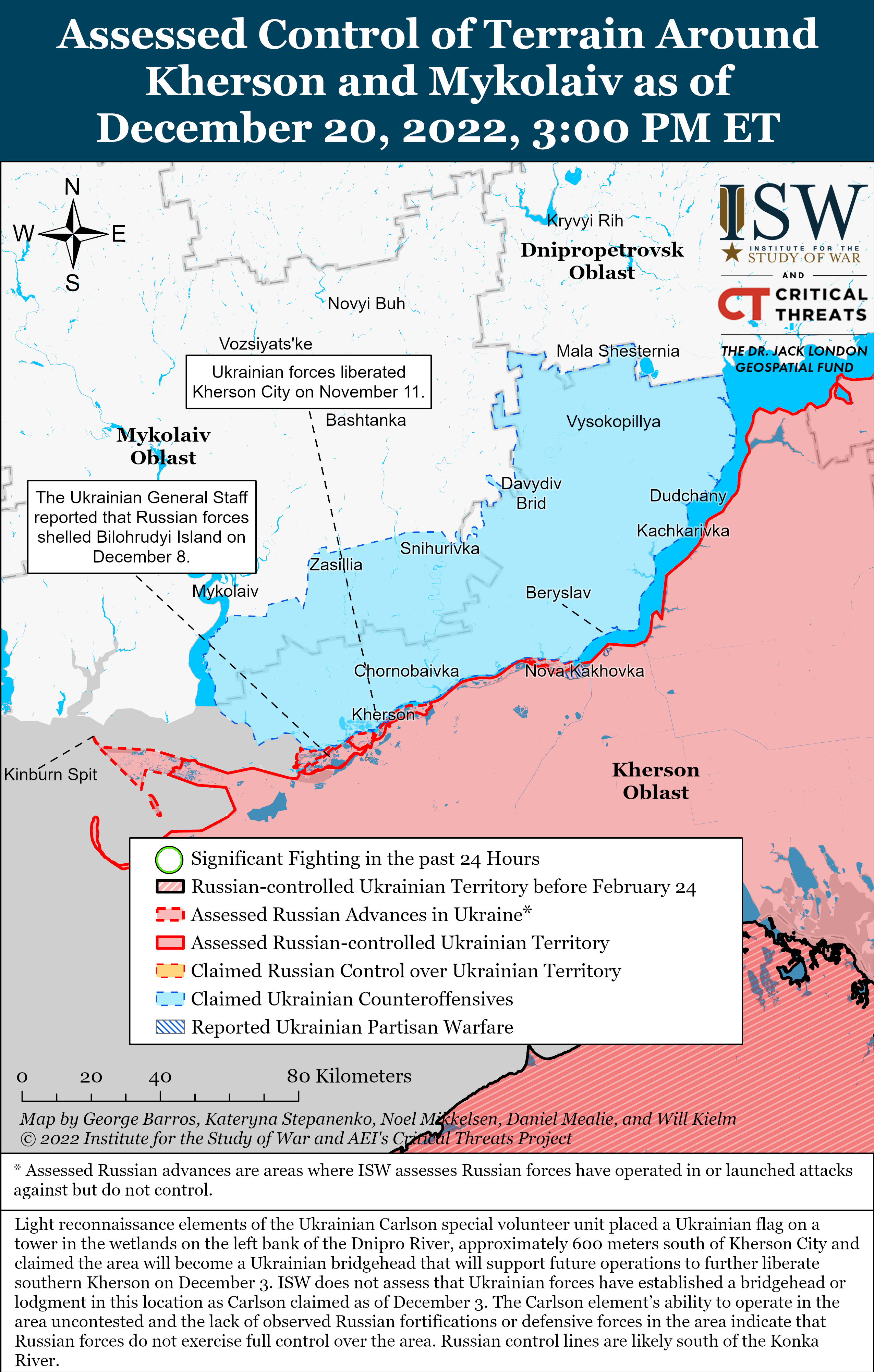 An independent Russian investigative organization, Conflict Intelligence Team, amplified an unverified report that Russian forces have assembled a unit from mobilized personnel and convicts.[54] The report stated that the unit deployed to an unspecified settlement in the Lyman direction on the frontline where it is currently waiting for its command to issue orders.[55] ISW is unable to independently verify these claims, but if true, they would indicate that Russian forces are conducting a prisoner recruitment campaign similar to the one used by the Wagner Group to obtain cannon fodder.

The Wagner Group’s troops continue to experience extremely high mortality rates due to high casualty rates and infectious diseases.[56] A forcibly mobilized Crimean man, Volodymyr Saychuk, stated that his unit fought alongside Wagner forces in Donetsk Oblast, noting that the number of dead Wagner personnel was three times the number of wounded. Saychuk stated that many Wagner servicemen also wore white and red wristbands which indicated that they had HIV or Hepatitis C.[57] ISW previously reported on October 25 that Wagner recruited prisoners with serious infectious diseases.[58]

Kremlin officials remain unlikely to sign an end-of-mobilization decree. Deputy of the Legislative Assembly of St. Petersburg Boris Vishnevsky shared a response letter from the Russian presidential administration, which stated that the administration requires “additional documents and materials” to consider Vishnevsky’s appeal to formally end mobilization and extended the period of consideration for his request until February.[59] The Kremlin is unlikely to declare the end of mobilization because doing so would demobilize servicemen currently operating on the frontlines or training to enter combat at a later date.[60] A Russian source reported that Russian military officials have not released volunteers from the Shaimuratov Battalion from service, despite their contracts ending in November.[61] The report stated that the wives of these service members appealed to their local military prosecutor’s office where the assistant duty officer stated there is a provision of a decree on “partial” mobilization, which states that military contracts continue in force while mobilization is in progress.