Ukrainian forces are likely preparing to launch or have launched a counteroffensive in Kherson Oblast as of July 23, but open-source visibility on the progress and tempo of the counteroffensive will likely be limited and lag behind events. Ukrainian Kherson Oblast Administration Adviser Serhiy Khlan stated on July 23 that Ukrainian forces have seized unspecified settlements in Kherson Oblast but called on Ukrainian civilians to remain silent on the progress of the counteroffensive until Ukrainian authorities release official statements.[1] Foreign Policy National Security Reporter Jack Detsch reported on July 22 that an unspecified senior US defense official stated that Ukrainian forces have recaptured unspecified “portions of Russian-occupied villages” in Kherson over the past week of July 15-22, indicating that Ukrainian forces have made some unspecified territorial advances along frontlines.[2] The area between the front line and Kherson City is rural and primarily composed of small settlements that are less likely to report on force movements and engagements, allowing control-of-terrain in this area to change without evidence appearing in open-source reporting. Russian authorities additionally have no incentive to report on Ukrainian territorial gains. The informational dynamics that allow ISW to report on Russian offensive operations with relatively little lag are thus inverted in this situation.  ISW will report on the progress of any Ukrainian counteroffensives to the best of its ability within these constraints.

Head of the Chechen Republic Ramzan Kadyrov seemingly confirmed that Colonel General Sergey Kuzovlev has replaced Army General Aleksandr Dvornikov as acting commander of Russia’s Southern Military District (SMD).[3] Kadyrov stated that Kuzovlev, to whom he explicitly referred as acting commander of the SMD, visited Chechnya on July 23 in order to inspect Kadyrov’s “Akhmat” battalions.[4] Kuzovlev had previously served as chief of staff of the SMD and commanded the Russian grouping in Syria from November 2020 to February 2021.[5] Kuzovlev’s visit and inspection of Kadyrov’s forces, which comes two days after Kadyrov announced that these battalions will not be immediately deploying into Ukraine, may support other hints that Kadyrov is facing mounting domestic pressure.[6] The anti-Kadyrov Sheikh Mansour battalion reportedly announced an insurgency against Kadyrov’s regime on July 21, and Kadyrov may want to hold the newly formed Akhmat battalions in Chechnya to handle any local unrest.[7] 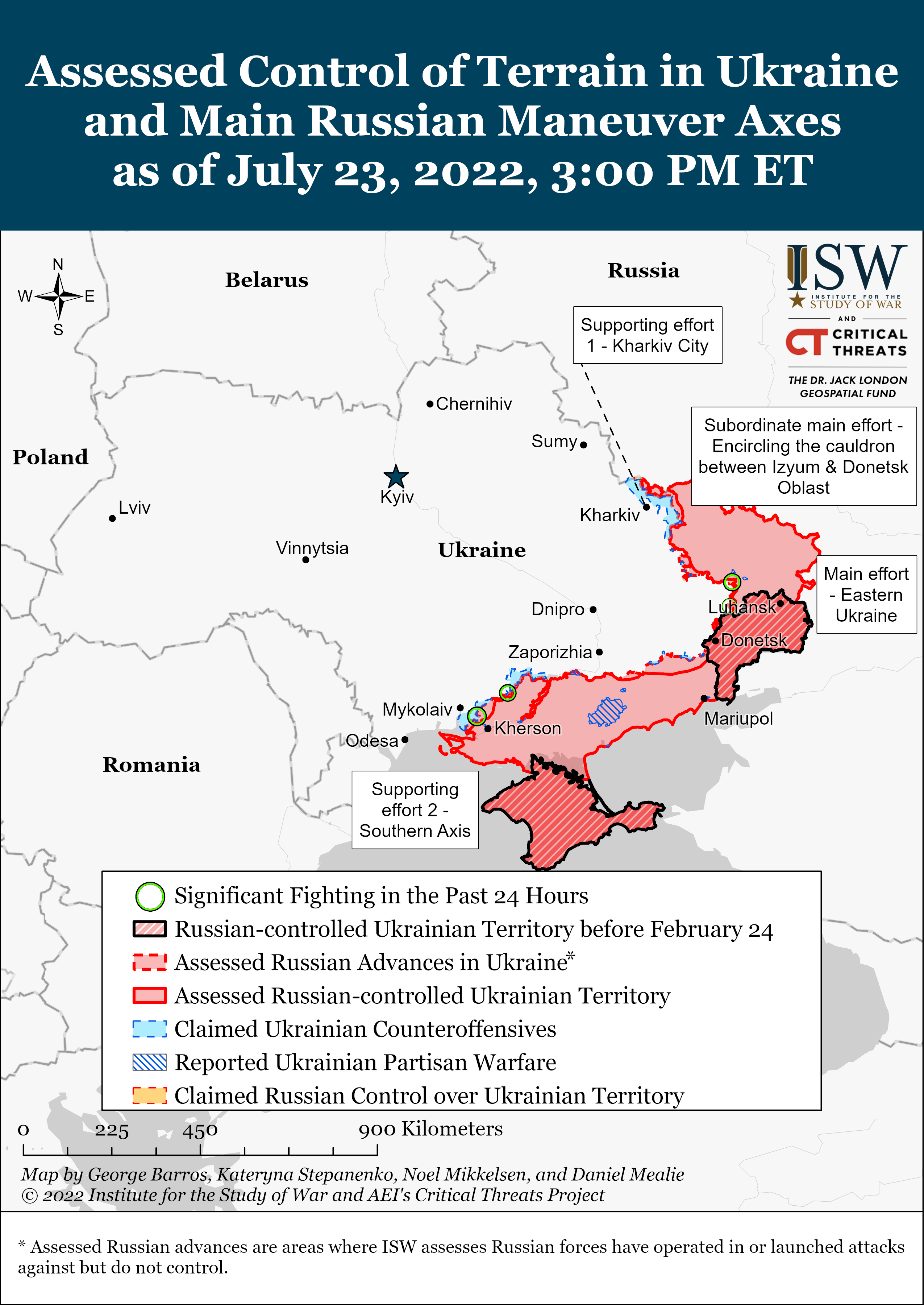 Russian forces did not conduct any confirmed ground attacks in the Avdiivka area and continued to fire on Ukrainian positions along the Avdiivka-Donetsk City frontline.[14] NASA FIRMS data from July 15-23 shows consistently fewer fires along the entire frontline in the Donbas, which strongly suggests that HIMARS are having a continued impact on Russian artillery capabilities. 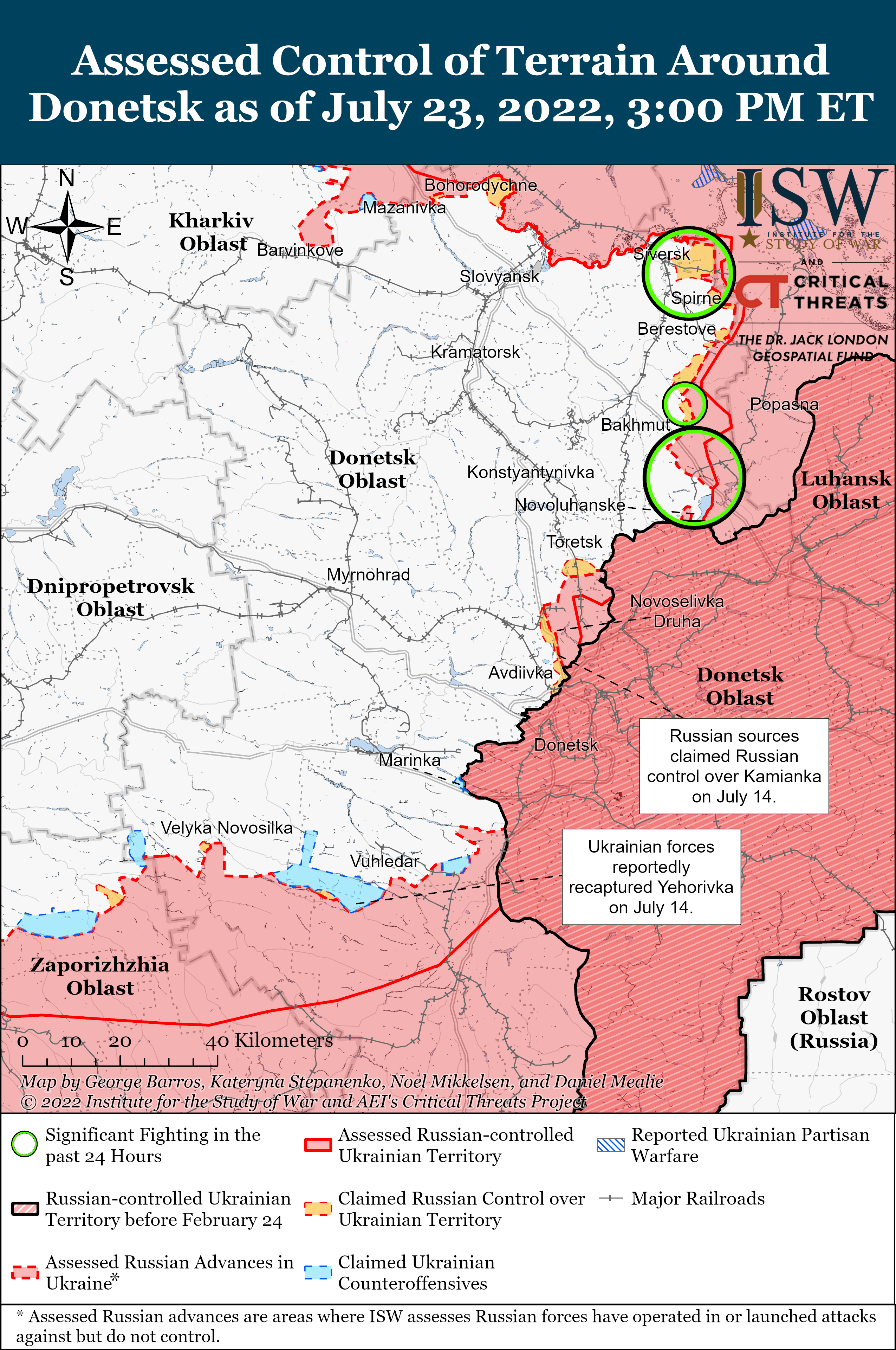 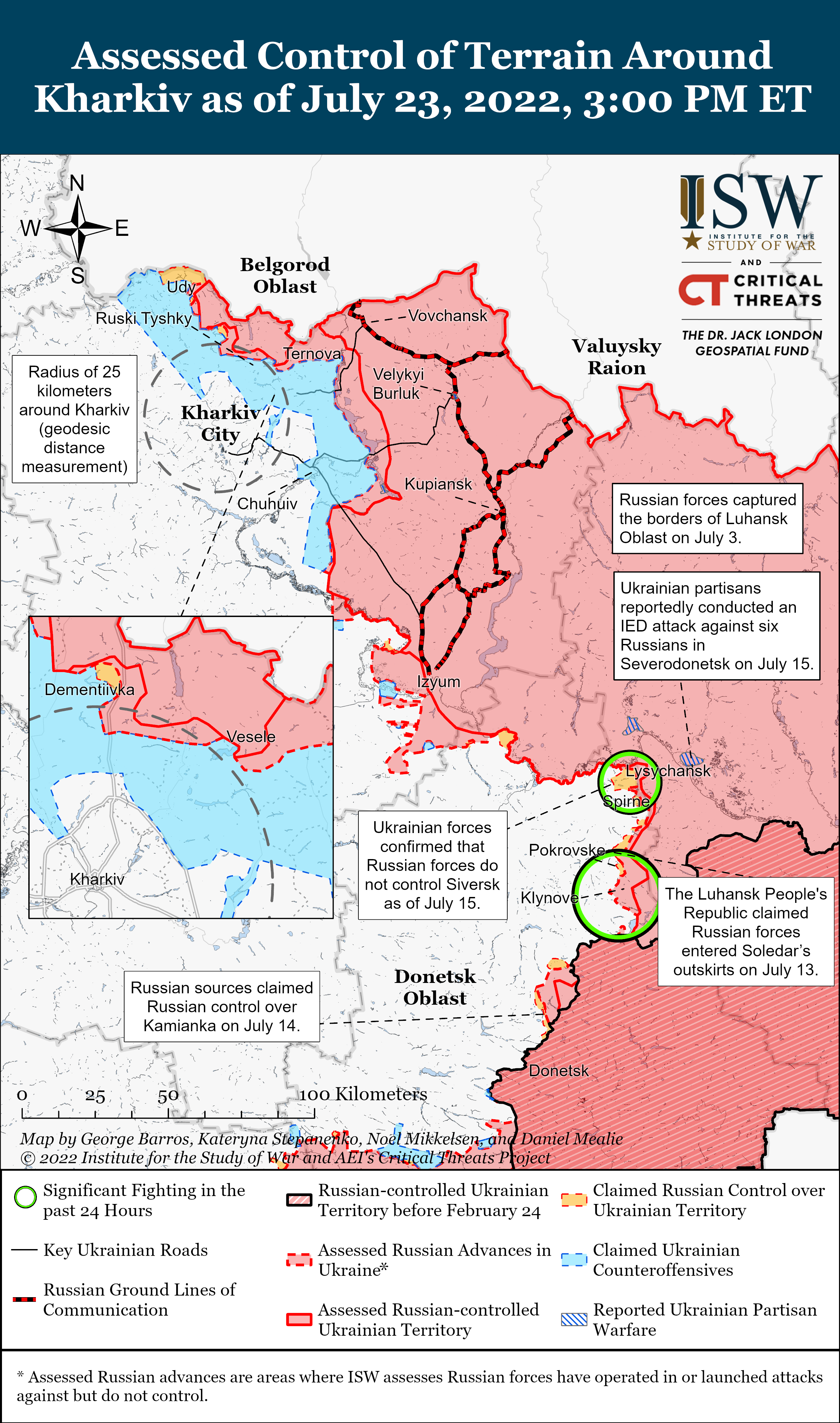 Ukrainian forces struck a bridge over the Inhulets River less than 10 km from Kherson City in Dariivka, Kherson Oblast on July 23. Footage shows six equidistant points of impact on the bridge and that passenger vehicles are able to cross the bridge but must evade the holes.[17] Ukrainian Kherson Oblast Administration Adviser Serhiy Khlan stated that Ukrainian forces struck the Dariivka Bridge as part of a sustained operation to cut the supply lines of Russian forces in Kherson City.[18]

Russian forces did not conduct any ground assaults on the Southern Axis on July 23 and continued shelling along the entire line of contact.[23] 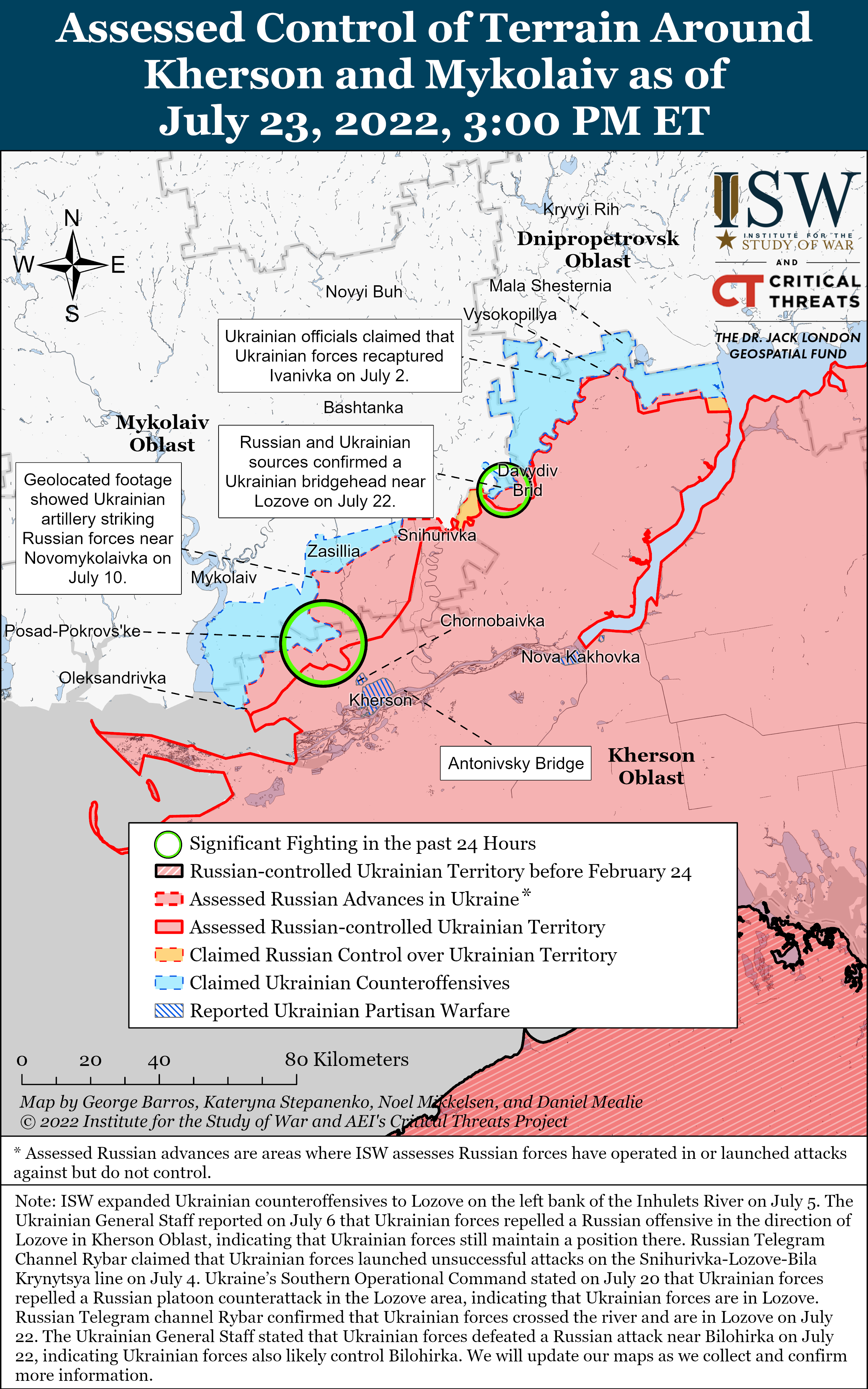 The Kremlin is continuing efforts to form regionally-based volunteer battalions. Spokesperson for Ukraine’s Main Intelligence Directorate (GUR) Vadym Skibitskyi gave an interview to Radio Free Europe Radio Liberty (RFERL) on July 23 wherein he indicated that the Kremlin is planning to form 16 new volunteer battalions by the end of this month.[24] Skibitsky also noted that the Kremlin is forming another corps in Mulino, Nizhny Novgorod Oblast, which seemingly supports prior statements made by the former Kyiv defense force commander Oleksandr Pavlyuk that Russia is forming a 3rd Army Corps (the forces of the Donetsk and Luhansk People’s Republics currently form the 1st and 2nd Army Corps, respectively) with up to 15,000 servicemen in Mulino.[25] Skibitksy stated that eight volunteer battalions have already been formed as of July 23. The Kremlin has not yet formed a volunteer battalion in St. Petersburg, the birthplace of Russian President Vladimir Putin.

Authorities in Russia’s Tyumen Oblast additionally announced the formation of three volunteer units in Tyumen Oblast on July 22.[26] Alexei Kulichkov, Tyumen’s Military Commissar, stated that the first company of the “Tobol” separate engineering battalion, comprised of over 50 people, has already deployed to unspecified training grounds and that Tyumen is also forming the “Taiga” volunteer sniper unit (echelon unspecified) and “Siberia” artillery battalion (”артиллерийский дивизион“) for deployment to Donbas after two or three weeks of training.[27] Russian federal subjects are notably forming combat, combat support, and combat service support units, so not all 16 new battalions (or 85 if and when all federal subjects form units) will be combat battalions. 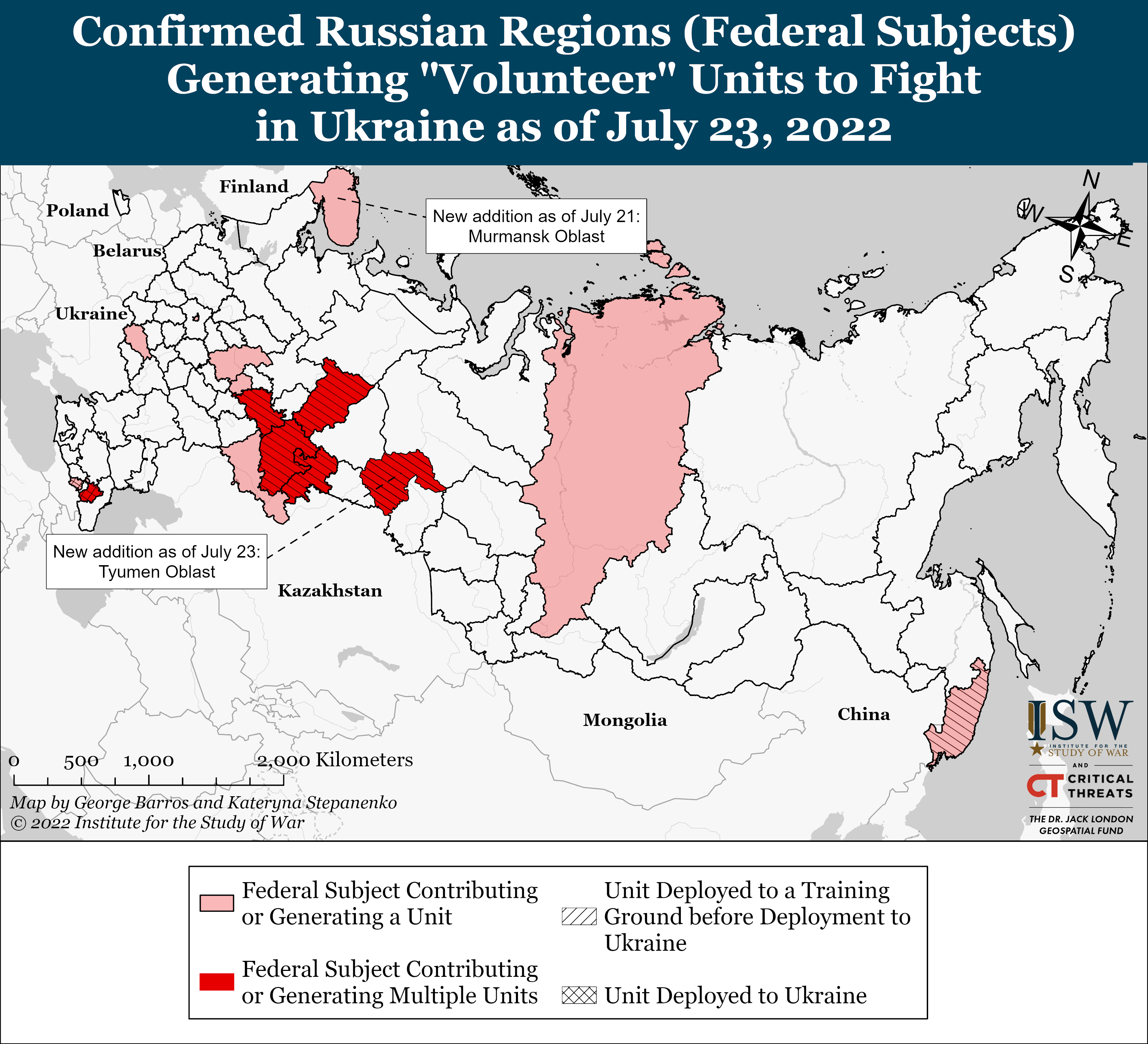 Russian occupation officials continued to set conditions for referenda on the integration of occupied areas into the Russian Federation. Russian-backed head of Zaporizhia’s occupation administration Yevheny Balitsky stated on July 23 that he signed a decree to initiate preparations for a referendum on the integration of occupied Zaporizhia Oblast into Russia by the autumn of 2022.[28] Balitsky claimed that this decree eliminated existing election bodies and created an entirely new election commission.

Russian-backed occupation administrators escalated measures to further isolate occupied areas from the non-Russian information space. Occupation heads of Kherson and Zaporizhia oblasts announced on July 23 that they will start restricting the use of Google and YouTube in occupied areas in order to limit the ability of residents to search for Ukrainian websites on Google.[29] Kherson occupation Head Kirill Stremousov stated that he additionally banned the use of the Viber messaging app and that YouTube video hosting has been slowed down. The Luhansk and Donetsk People’s Republics (LNR and DNR) blocked Google on July 21 and 22, respectively.[30] Russian authorities are likely to keep enacting such controls on the information space in order to curb the dissemination of any anti-Russian messaging.