Alarm in the Russian nationalist information space continues to grow as the pace of Russian operations slows in the face of successful Ukrainian high-mobility artillery rocket system (HIMARS) strikes on key Russian logistics and command-and-control nodes. Moscow Calling, a medium-sized Russian Telegram channel with 31,000 subscribers, posted an appraisal of the entirety of Russian operations in Ukraine since February 24.[6] Moscow Calling defined three distinct phases of the war—the first spanning from initial invasion to the withdrawal of Russian troops from Kyiv, Sumy, and Chernihiv Oblasts and the second spanning between that point and the introduction of Western-provided HIMARS.[7] Moscow Calling notably defined the arrival of HIMARS as a distinct turning point in the war and stated that previously provided Western weapons systems (such as NLAWs, Javelins, Stingers, and Bayraktars) did very little against Russian artillery bombardment (they are not designed or intended to counter artillery attack), but that HIMARS changed everything for Russian capabilities in Ukraine.[8] Moscow Calling strongly insinuated that recent Ukrainian strikes on Russian warehouses, communication hubs, and rear bases are having a devastating and potentially irreversible impact on the development of future Russian offensives.[9]

This post is consistent with previous reports from Western defense officials that Russian troops are being forced to engage in various HIMARS mitigation tactics on the battlefield, including camouflage measures and constantly changing the location of equipment groupings.[10] These mitigation tactics are impeding Russian forces from conducting the massive artillery barrages that they have widely employed over the course of the war, as evidenced by NASA Fire Information for Resource Management (FIRMS) data that shows consistently fewer observed heat anomalies over the frontline in Donbas since the introduction of HIMARS to Ukraine.

The Kremlin is likely facing mounting (if still very limited) domestic dissent from within ethnic minority enclaves, which are disproportionately bearing the brunt of the Kremlin’s force generation efforts. Vasily Matenov, founder of the “Asians of Russia” organization, stated in early July that he had officially registered the organization in order to advocate for “endangered and small-numbered peoples who are discriminated against by the Russian state.”[11] Matenov emphasized that the preliminary goal of “Asians of Russia” is to stop the war in Ukraine due to devastating statistics on the combat deaths of soldiers from minority groups.[12] Similarly, Advisor to Ukraine’s Minister of Internal Affairs Anton Gerashchenko cited Ukrainian sources that claim Russian authorities pay triple amounts to families of deceased soldiers from Moscow compared to families of soldiers from the minority-dominant region of Buryatia.[13] As ISW has previously reported, protest groups in ethnic minority enclaves have already formed in Tuva and Buryatia, and these communities will likely continue to protest the Kremlin’s reliance on drawing combat power from peripheral groups of Russian society.[14] 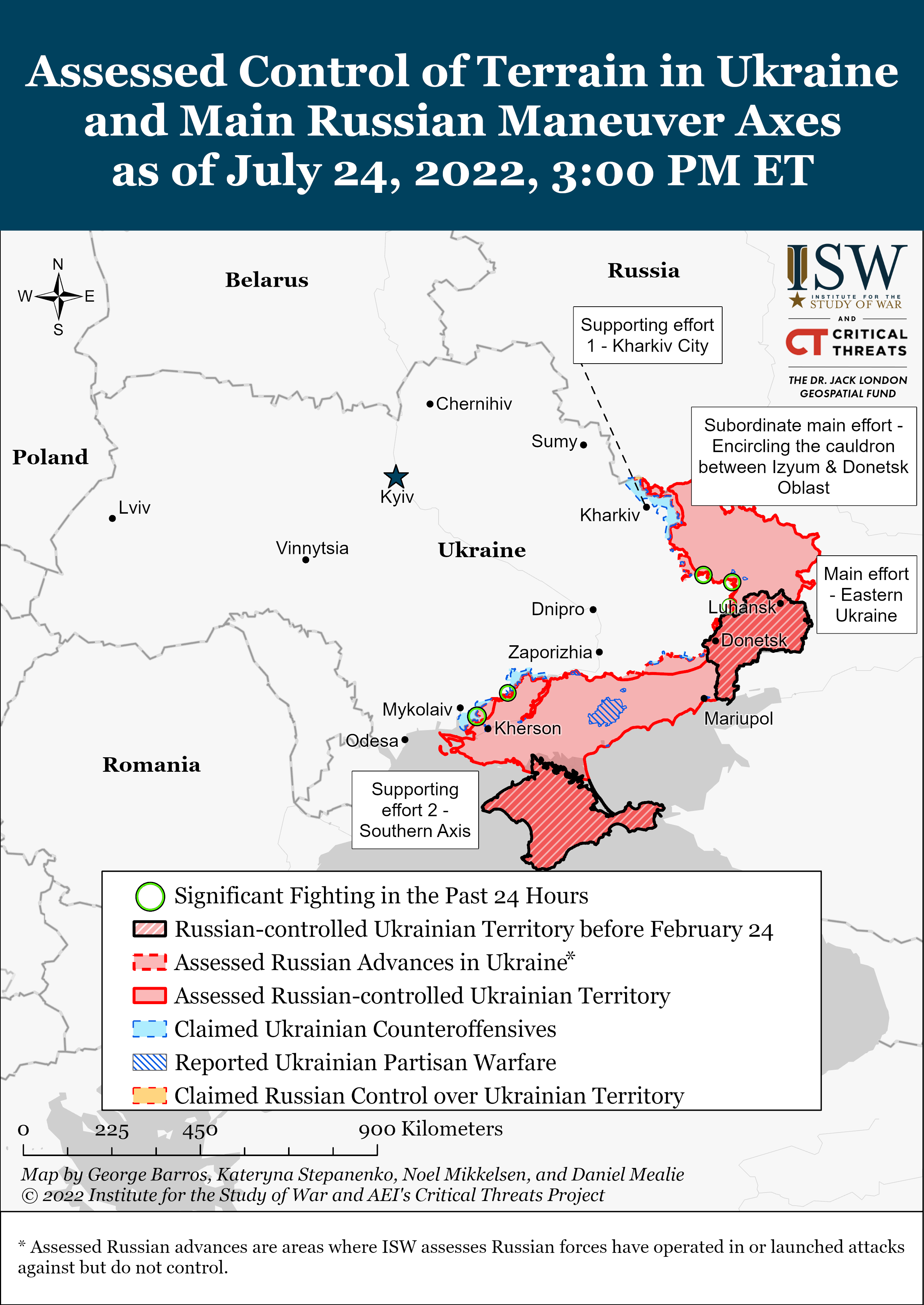 Russian forces continued ground attacks east of Siversk on July 24. The Ukrainian General Staff stated that Russian forces unsuccessfully attempted to advance west of Verkhnokamyanka and Bilohorivka toward Verkhnokamyanske, 5 km due east of Siversk.[17] The Russian Ministry of Defense indicated that Russian counter-battery fire focused on suppressing Ukrainian firing points to the east of Siversk, which is consistent with Ukrainian reports of continued Russian artillery fire on settlements in the area between the Luhansk Oblast border and Siversk.[18]

Russian forces did not make any confirmed ground attacks toward Avdiivka and fired on Ukrainian positions along the Avdiivka-Donetsk city frontline.[21] 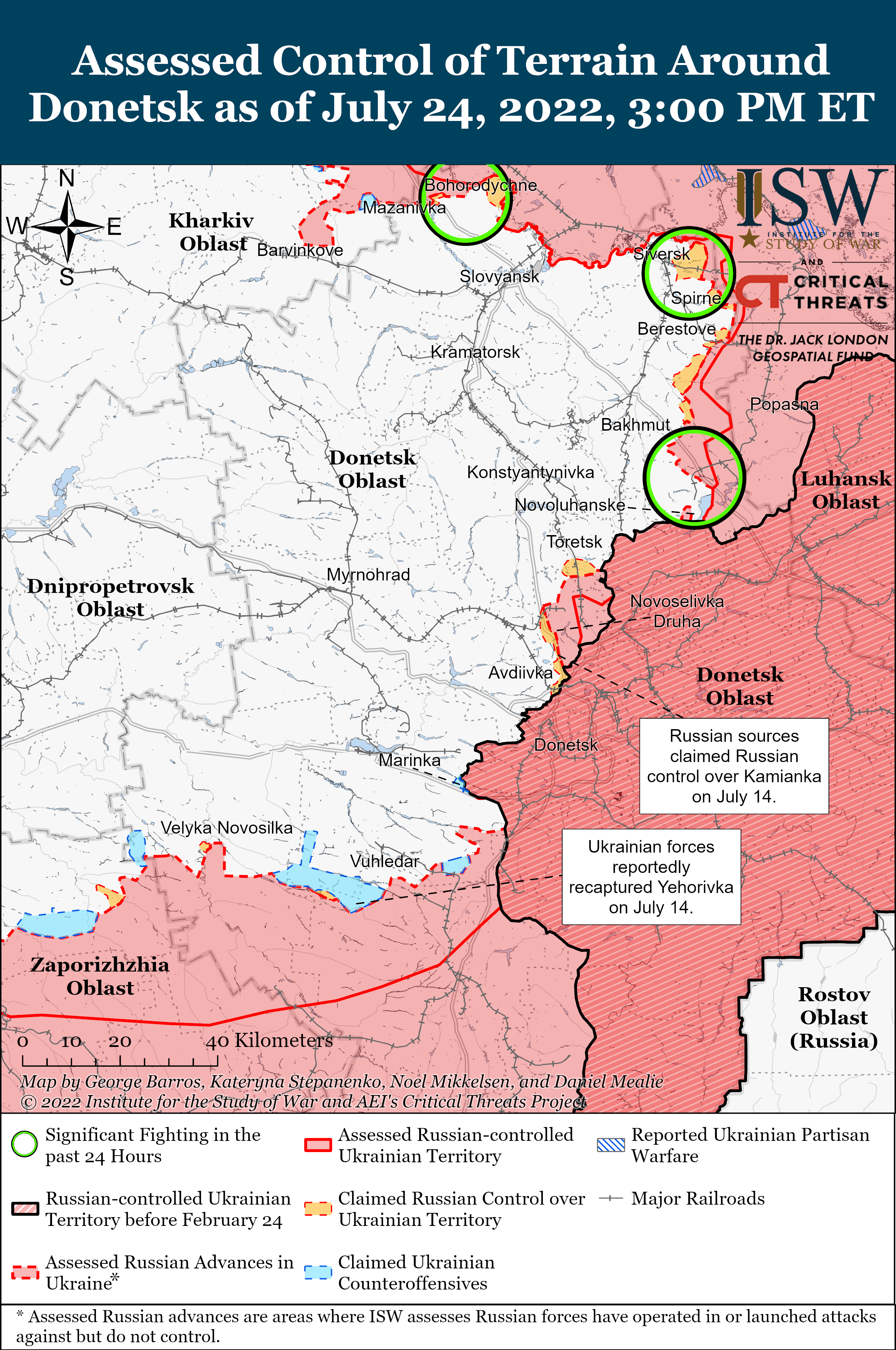 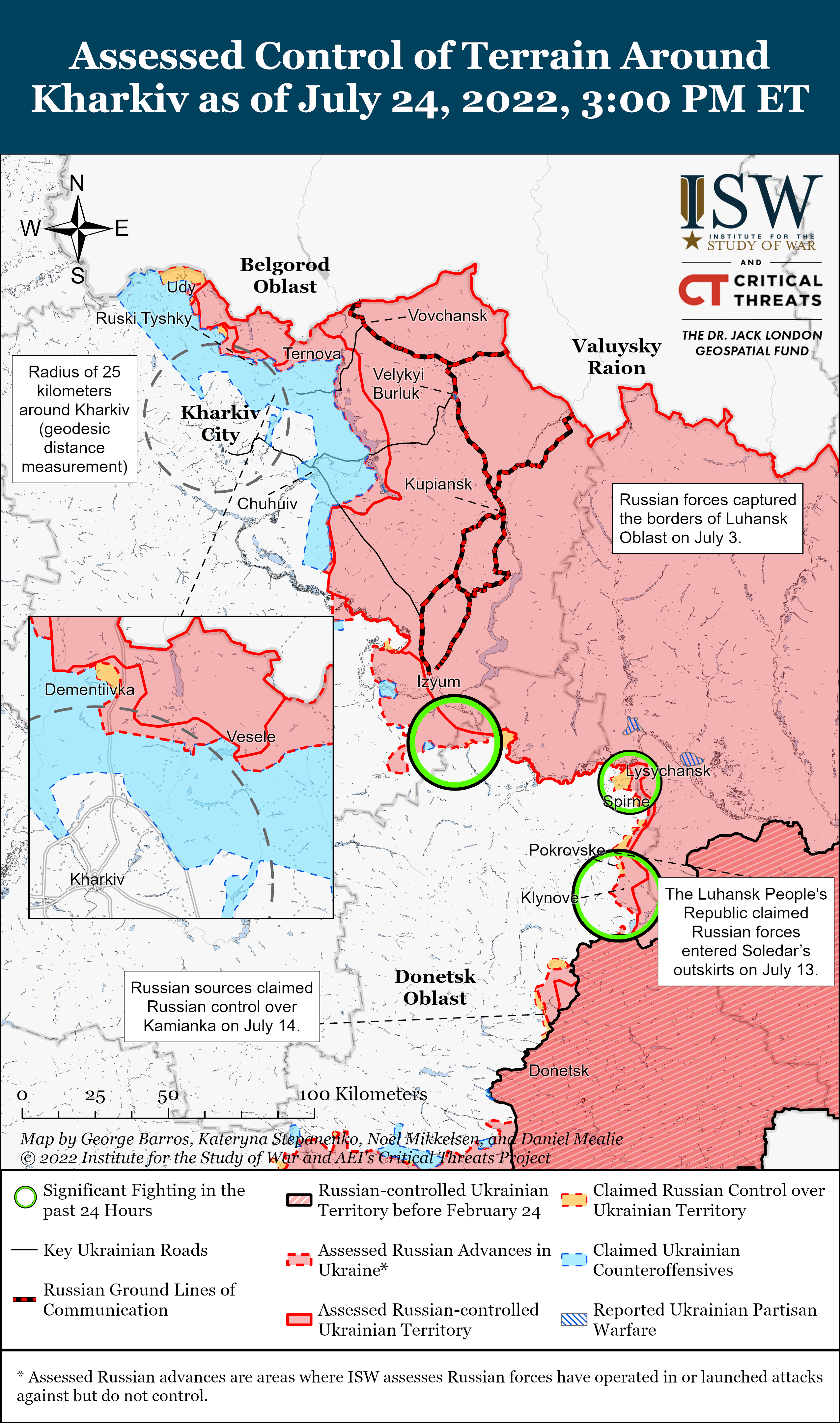 Ukrainian strikes have damaged all three Russian-controlled bridges leading into Kherson City within the past week as of July 24. Ukrainian forces struck the bridge over the dam at the Nova Kakhova Hydroelectric Power Plant on July 24, damaging the road but still allowing passenger vehicles to cross the bridge.[23] Russian sources claimed that Ukraine used HIMARS to strike the bridge and reported that repairs to the bridge are already underway.[24] Footage from July 23 shows passenger vehicles navigating around holes left on the Antonivskyi Bridge, suggesting that the damage to the free-standing Antonivskyi Bridge may be more complex to repair than the Nova Kakhova bridge.[25]

Ukrainian partisans blew up a Russian-controlled railway near Novobohdanivka, Zaporizhia Oblast, 30 km north of Melitopol, overnight on July 23-24. Geolocated images of the aftermath show splits in a rail juncture in Novobohdanivka that cuts off Vasylivka and Tokmak, Zaporizhia Oblast from the main rail line to Melitopol.[26] Ukrainian officials reported that Russian forces use the rail line to transport equipment and personnel from Melitopol towards Vasylivka and Tokmak.[27]

Ukraine’s Main Intelligence Directorate (GUR) released an urgent message on July 23 calling on civilians in occupied Enerhodar, Zaporizhia Oblast, and the surrounding areas to provide details on Russians and their movements in Enerhodar.[28] The GUR report specifically asked residents for addresses and geolocated coordinates of Russian forces’ housing and deployment points, Russian ground lines of communication, residences of local occupation authorities, and the biographical details including names, addresses, and places of employment of all Russian collaborators and sympathizers.[29]

Russian forces attempted limited ground assaults in Kherson Oblast on July 24. The Ukrainian General Staff reported that Ukrainian forces repelled Russian ground assaults in the Sukhy Stavok–Andriivka and Bruskinskye–Bilohirka directions near the Ukrainian bridgehead on the Inhulets River south of Davydiv Brid.[30] It is unlikely the fighting around the bridgehead is part of or directly countering the main Ukrainian counteroffensive effort. Russian forces reportedly used more S-300 anti-air missiles to strike ground targets in Mykolaiv City.[31] A fire broke out at an oil depot north of Snihurivka, where Russian forces have previously conducted strikes.[32] Russian forces continued shelling along the entire line of contact.[33] Ukrainian counterbattery fire struck a battery of Russian S-300 launchers, reportedly with HIMARS, near Zelenotropynske, Kherson Oblast.[34] Footage and images of the area from Russian and Ukrainian sources shows two destroyed S-300 launchers.[35] Ukrainian Mayor of Melitopol Ivan Fedorov reported that Ukrainian forces also struck the Russian-occupied Melitopol airfield overnight on July 23-24 and that Russian forces are unsuccessfully trying to restore the airfield.[36] 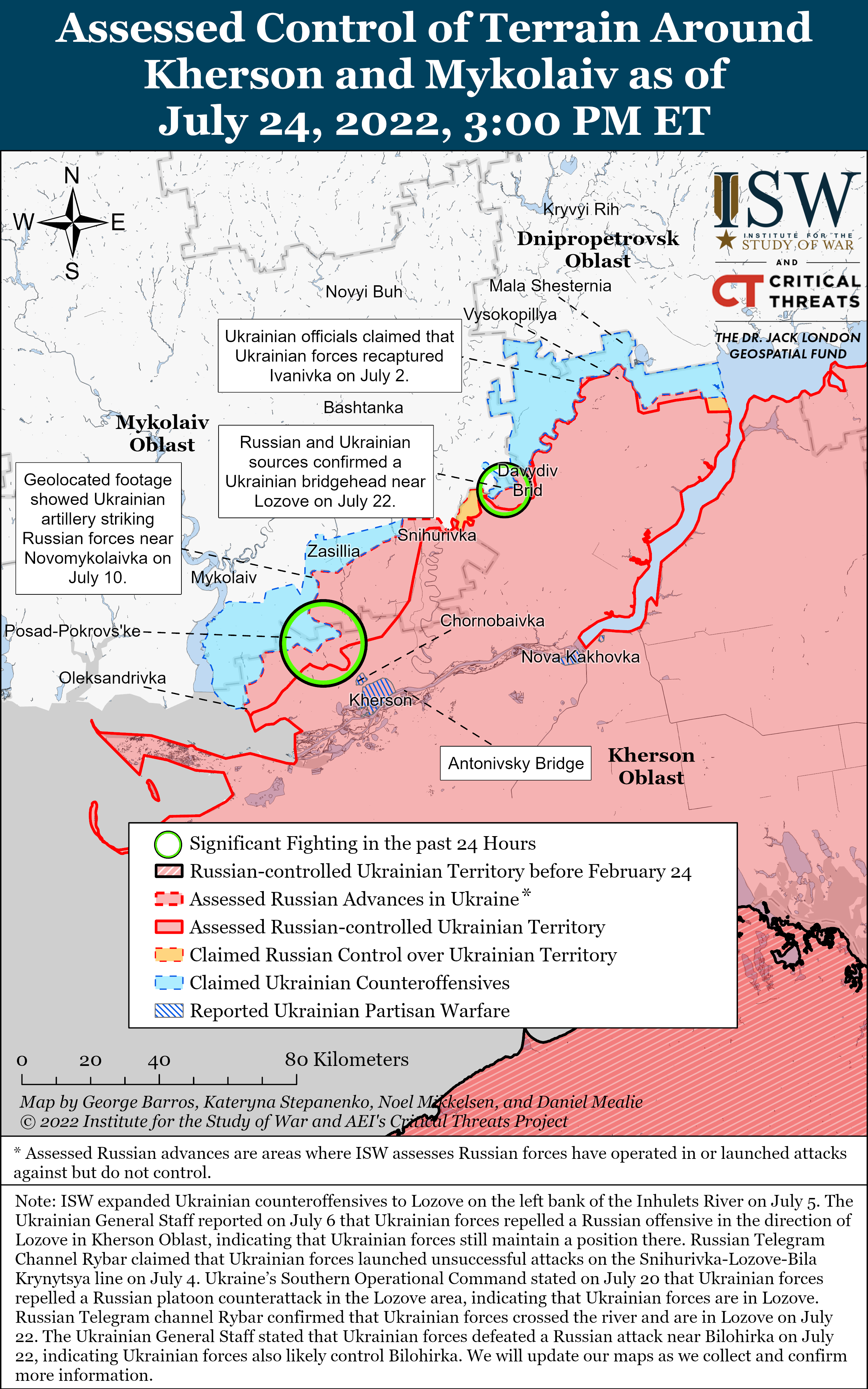 The Kremlin continues to constitute regionally-based volunteer battalions for deployment to Ukraine. Artem Vikharev, Military Commissar of the Cherepovets Raion of Vologda Oblast, announced on July 20 that Vologda Oblast is forming a combat battalion.[37] The Vologda battalion is likely an artillery battalion. Vikharev stated that the volunteers will be sent to unspecified artillery units that are being formed in Luga, Leningrad Oblast. Luga hosts a large artillery training ground and the base of the 9th Guards Artillery Brigade (of the 6th Combined Arms Army).[38] Russian State Duma Member Maria Butina announced on July 13 that Kirov Oblast is forming the “Vyatka” volunteer battalion, which has reportedly been almost entirely assembled as of July 9.[39] It is unclear whether the “Vyatka” Battalion has deployed to a training ground or to Ukraine as of this publication. ISW has updated its map of Russian federal subjects generating “volunteer” units accordingly. 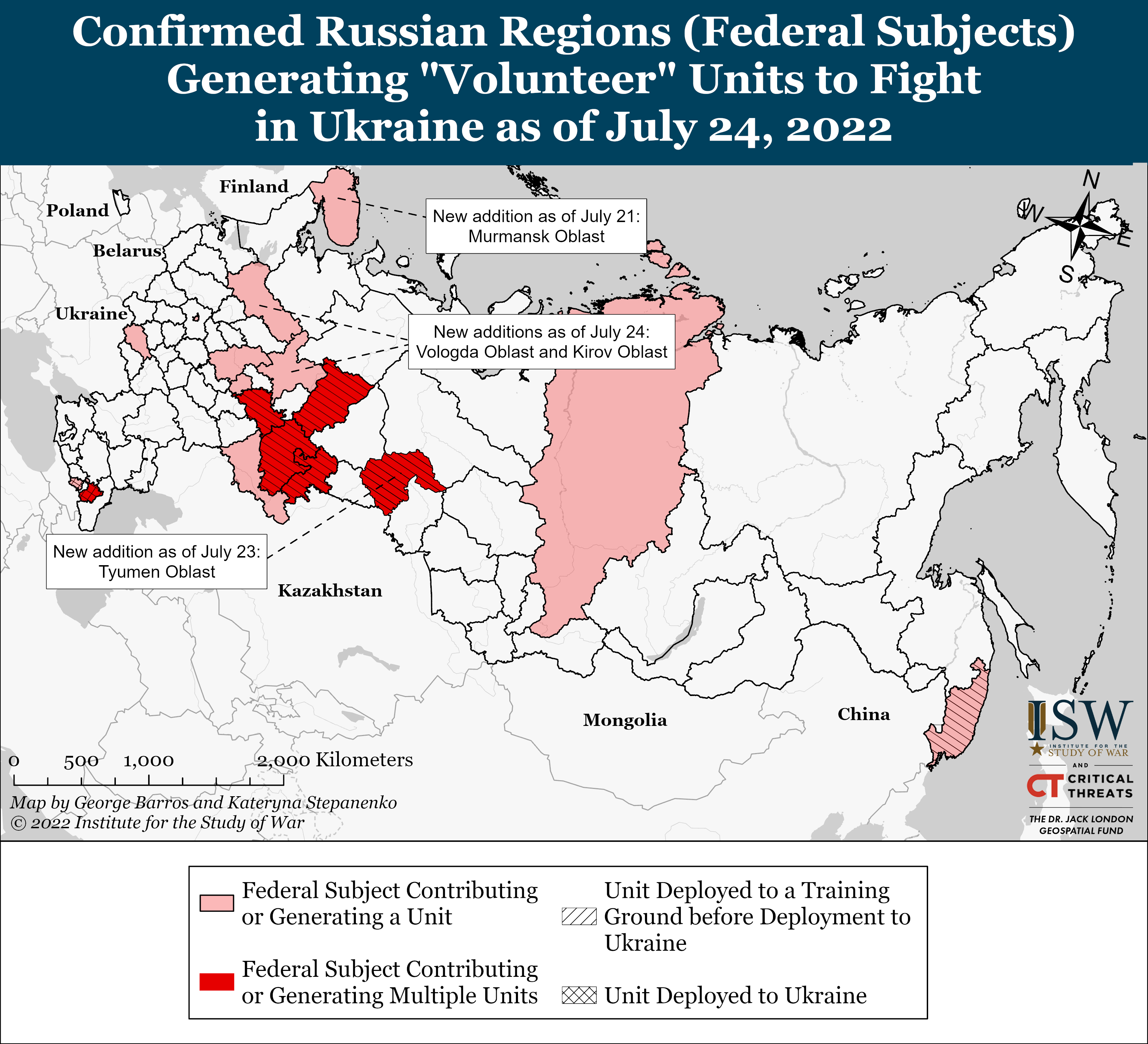 The Russian military leadership is leveraging recruitment drives carried out by private military companies (PMCs) to generate combat power. Russian Tyumen Oblast-based news outlet 72ru reported that the Wagner Group PMC was actively recruiting residents of Tyumen Oblast for deployment to Ukraine on year-long contracts as early as July 9.[40] This is consistent with a report by independent Latvia-based Russian language newspaper Meduza that stated that Wagner Group units are increasingly acting as the primary “strike groups” of the Russian Armed Forces and are being “rented out” to forward-deployed Russian units.[41] Meduza reported that the Russian Ministry of Defense previously ordered certain Wagner Group detachments to re-deploy to Ukraine from locations in Syria, Libya, and elsewhere in Africa and that the involvement of the Wagner Group in the capture of Popansa has increased their popularity, and likely their ability to galvanize recruitment. Meduza also noted that other PMC elements, such groups formed under the auspices of the “Redoubt” PMC were rapidly constituted and are largely comprised of former soldiers and “blacklisted” officers.[42]

Russian authorities are seeking to leverage domestic Russian labor to “reconstruct” destroyed areas of Ukraine. Tyumen Oblast news outlet 72ru reported on June 24 that Russian officials are recruiting Tyumen Oblast citizens to reconstruct civilian infrastructure in Donbas territories.[45] 72ru reported that Russian officials are offering Tyumen residents up to 200,000 rubles for employee rotations of 30 or 60 days.[46] The report stated that the recruiting company Stroykom will only accept men without criminal records and will pay for travel, accommodation, and meals.[47]