Crimean occupation officials obliquely accused Ukraine of orchestrating a drone attack on the Russian Black Sea Fleet headquarters in occupied Sevastopol on July 31, but Ukrainian officials denied responsibility for the attack.[2] Russian Governor of Sevastopol Mihail Razvozhaev claimed that Ukrainians “decided to spoil” Russia’s Navy Day celebrations and noted that a drone exploded in the headquarters’ yard but did not specify whether Ukrainian forces or locals launched the drone.[3] Razvozhaev published images showcasing minor damage to the headquarters building and yard, and social media footage depicted a small cloud of smoke rising from the building.[4] Razvozhaev also claimed that the explosion wounded six people. Russian Crimean Senator Olga Kovitidi later announced that unspecified actors carried out the attack with a makeshift drone from within the territory of Sevastopol.[5] The Ukrainian Naval Forces and Odesa Oblast Military Administration Spokesman Serhiy Bratchuk indirectly suggested that the drone attack was a Russian false flag operation.[6] ISW cannot independently verify the actor responsible for the attack.

The Russian government may be complicating international efforts to discern the nature of an unidentified July 28 kinetic event on the Olenivka penal colony. The Russian Ministry of Defense officially invited experts from the United Nations and the International Committee of the Red Cross (ICRC) to investigate the attack at the Olenivka prison on July 30.[7] The ICRC stated that it has not received access to the prison as of July 31, however.[8] Ukrainian Deputy Prime Minister Iryna Vereschuk also noted that Russian authorities have not responded to Ukrainian requests to return the bodies of deceased Ukrainian prisoners of war (POWs).[9]

Open-source intelligence (OSINT) analyst Oliver Alexander published an examination of satellite imagery from July 27 showing open graves at the Olenivka prison, noting that July 29 satellite imagery appears to show that the same graves have been covered.[10] Investigative journalism group Bellingcat founder Eliot Higgins stated that lower resolution satellite imagery indicates ground disturbances after July 18 and prior to July 21, suggesting that the Russians may have planned the incident in advance.[11] ISW will continue to monitor the open source for information on the strike on Olenivka and will provide updates as they appear. 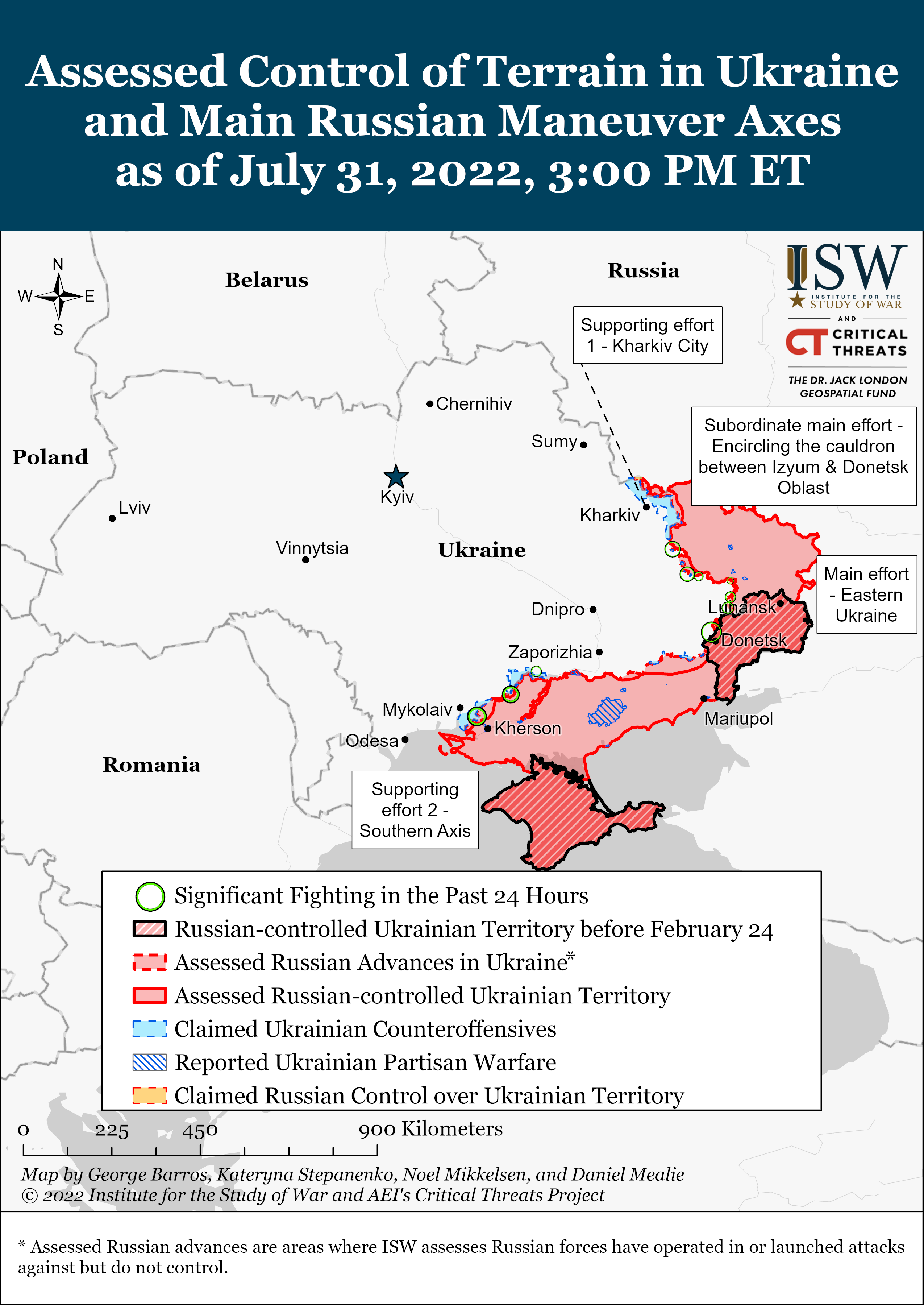 Russian forces conducted a limited ground attack northwest of Slovyansk and otherwise shelled settlements along the Kharkiv-Donetsk Oblast border on July 31. The Ukrainian General Staff stated that Russian forces conducted an unsuccessful reconnaissance-in-force operation near Dolyna (about 20km northwest of Slovyansk along the E40 highway).[15] Russian troops also conducted artillery strikes near Dolyna, Krasnopillya, Mazanivka, and Adamivka - all settlements near the oblast border northwest of Slovyansk.[16] The Ukrainian General Staff noted that Russian troops are transferring separate units from the Slovyansk direction to the Zaporizhia direction, which is consistent with ISW’s assessment that Russian military leadership is likely de-prioritizing attempts to advance on Slovyansk in favor of operations elsewhere in Donbas and Southern Ukraine.[17]

Russian forces conducted several limited ground attacks northeast and southwest of Avdiivka and made marginal gains during offensive operations around Avdiivka on July 31.[24] The Ukrainian General Staff reported that Russian forces attempted advances around Kamyanka (less than 10km northeast of Avdiika) and Pisky (about 15km southwest of Avdiivka) and that unspecified separate Russian units had ”partial success” around Avdiivka.[25] Donetsk People‘s Republic (DNR) Deputy Information Minister Daniil Bezsonov claimed that Russian and DNR forces secured positions on the southeastern outskirts of Pisky, which is consistent with the Ukrainian General Staff’s statement that Russian forces attempted to push northwest of Donetsk City towards Pisky and had unspecified “partial success“ in the general area of Avdiivka.[26] Russian forces continued to shell along the Avdiivka-Donetsk City frontline in order to cover ground attacks towards Avdiivka and Pisky.[27] Russian forces did not conduct any ground assaults in the Kharkiv City direction, instead focusing on maintaining previously occupied lines and preventing Ukrainian forces from advancing toward the Russian border in Kharkiv Oblast on July 31.[28] Russian forces launched an airstrike near Staryi Saltiv, approximately 46km east of Kharkiv City, and continued conducting tube, tank, and rocket artillery strikes on Kharkiv City and settlements to the north, northeast, and southeast.[29] 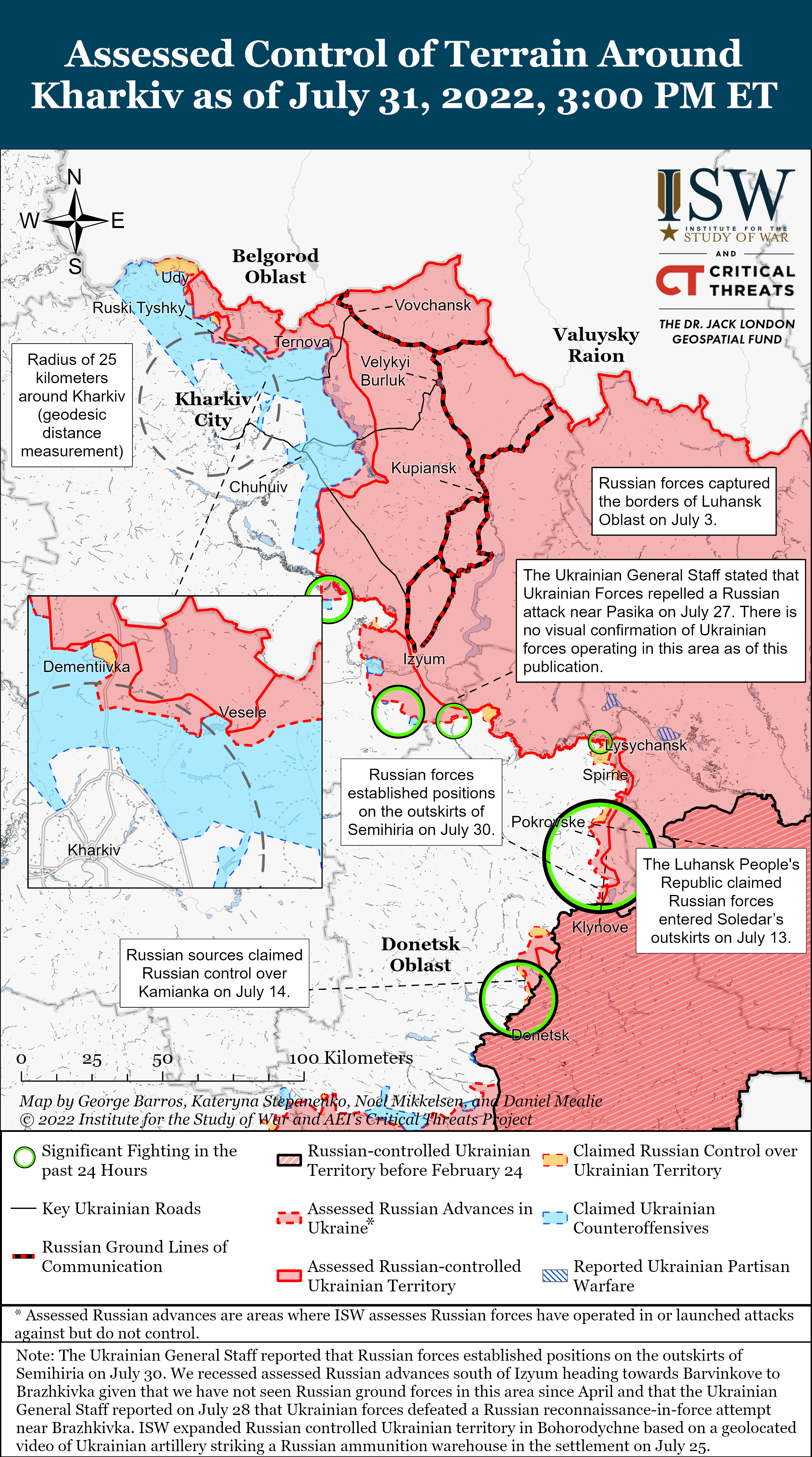 Ukrainian forces continue to successfully target Russian strongholds, transit routes, and ammunition depots throughout the Southern Axis. Ukrainian officials confirmed that Ukrainian forces destroyed a field ammunition depot in Vysoke (about 48km due northeast of Kherson City), and geolocated footage showed another large explosion in northern Kherson Oblast near the Dnipro River.[38] Advisor to the Ukrainian Internal Affairs Minister Anton Herashenko also confirmed that Ukrainian forces used western-provided HIMARS to strike a 40-car train with Russian equipment and personnel in Brylivka (about 47km southeast of Kherson City) on July 30, resulting in 80 dead and 200 wounded Russian servicemen.[39] Ukrainian news outlet “Ria Melitopol” published footage of an explosion at the Melitopol airfield on July 31. Ukrainian forces had targeted a reported Russian ammunition depot and base near the airfield on July 3.[40] Ukrainian forces likely conducted the strike against the airfield, but Ukrainian officials have not taken credit for or explained the explosion as of the time of this publication. The Ukrainian Main Military Intelligence Directorate (GUR) also confirmed that a Ukrainian strike on Russian positions in Verhniy Tokmak and Chernihivka (both approximately 40km southeast of Tokmak) on July 29, resulted in Russian forces relocating their personnel and equipment from those settlements to Berdyansk and Tokmak.[41] The GUR specified that approximately 100 Russian servicemen remain around Chernihivka to maintain checkpoints but that most of the personnel are relocating and mining the roads.[42] The GUR also noted that the strike wounded at least 40 Russian servicemen. Russian occupation authorities continued setting conditions for a referendum in Kherson Oblast on July 31. Kherson Oblast Head Dmytro Butrii reported that Russian forces opened polling stations, clarified voting lists, and handed out Russian passports to Kherson Oblast residents on July 31.[46] Melitopol Mayor Ivan Fedorov reported that Russian occupation authorities are bringing citizens of distant Russian republics to live in Melitopol, reportedly in an effort to create the image of a large population living in Melitopol.[47] Fedorov also stated that there are 800 hundred vehicles with 4,000 people in line to evacuate occupied territories and that Russian authorities are making copies of the passports of everyone who leaves.[48] Fedorov stated that Russian authorities only allow 200-300 cars to pass each day and that only those with permission slips will be allowed to leave the occupied territories starting on Monday, August 1.[49] Geolocated video footage posted on July 31 reportedly showed Ukrainian partisans ambushing a Russian police patrol vehicle using a roadside bomb in Kherson on July 27.[50]