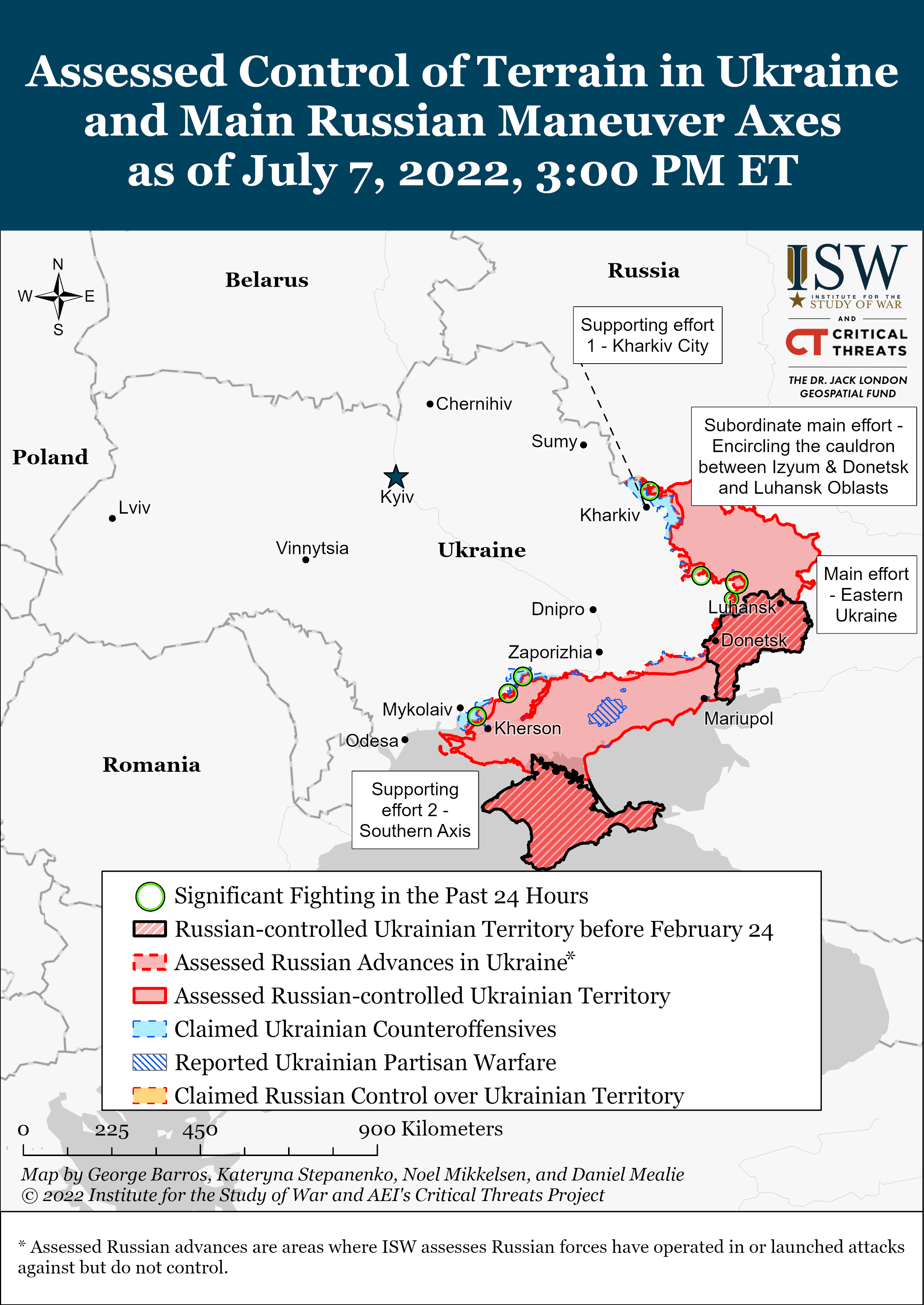 Russian forces continued efforts to advance west toward Siversk from the Lysychansk area and made marginal gains near the Luhansk-Donetsk Oblast border on July 7. Geolocated combat footage from July 7 confirmed that forces of the Donetsk People’s Republic (DNR) entered the eastern outskirts of Spirne, about 10 km southwest of Siversk.[8] Luhansk Oblast Head Serhiy Haidai reported that Russian and Ukrainian troops continued to fight around Verkhnokamyanka, about 15 km directly east of Siversk.[9] Russian forces also unsuccessfully attempted to advance in the direction of Hryhorivka (10 km northeast of Siversk) and Verkhnomayanske (5 km directly east of Siversk).[10] Russian forces shelled several settlements to the south and east of Siversk to continue to set conditions for further advances west of the Luhansk Oblast border.[11]

Russian forces did not conduct any confirmed ground attacks in the Avdiivka-Donetsk City area and fired on Ukrainian positions along the line of contact on July 7.[15] 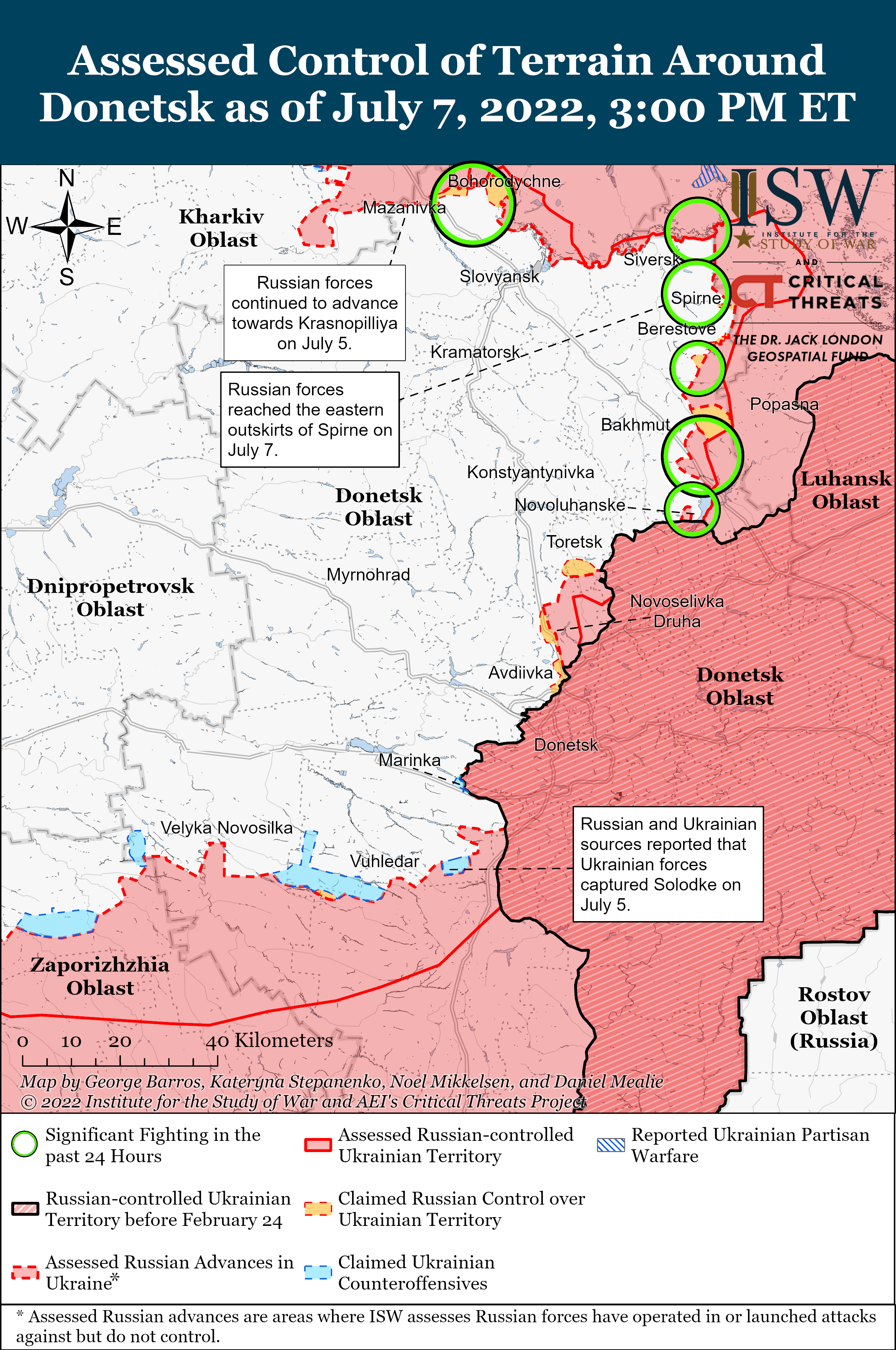 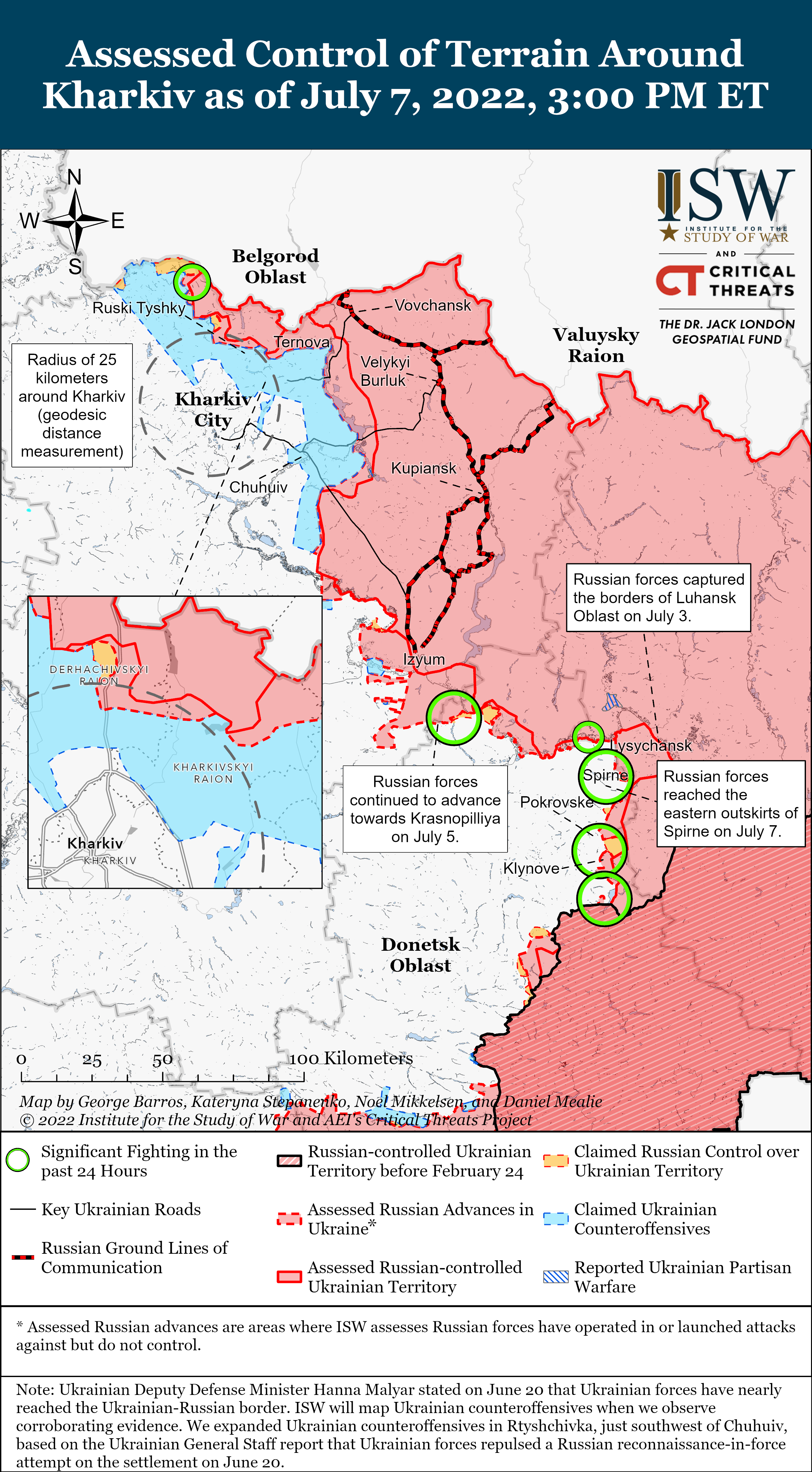 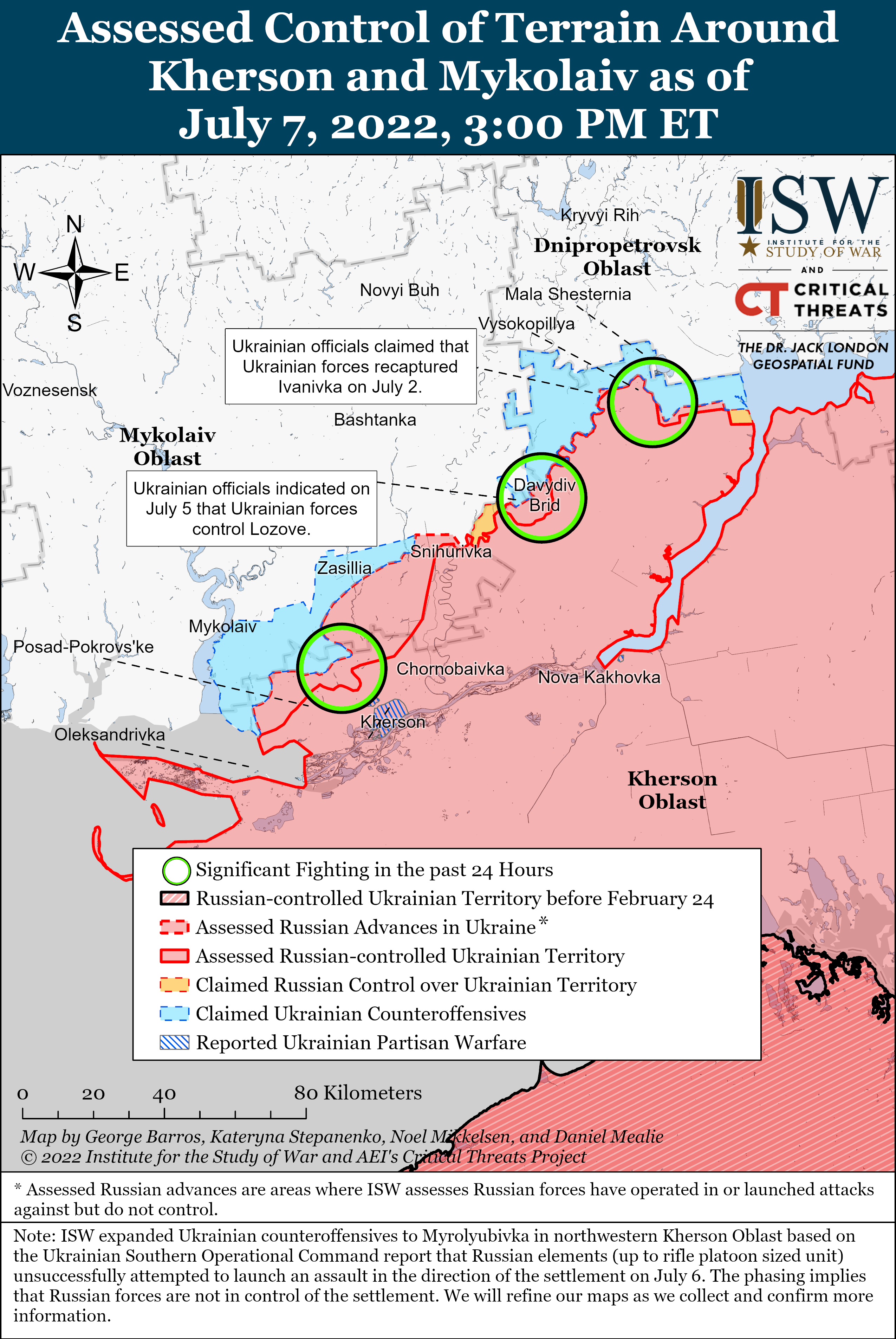 Russian sources confirmed that the Russian military leadership continues to create ad hoc volunteer battalions for deployment in Ukraine. Russian Telegram channel Voennyi Osvedomitel’ reported that Russia’s Nizhny Novgorod Oblast is forming its own volunteer tank battalion as part of a continued trend of Russian oblasts creating so-called “nominal” and volunteer-based units for service in Ukraine.[26] Voennyi Osvedomitel’ stated that the Union of Russian Veterans of Afghanistan is registering volunteers for the Nizhny Novgorod tank battalion and that the campaign was officially confirmed by the Western Military District’s press service, which is consistent with ISW’s previous assessment that Russian authorities are forming ad hoc composite units to make up for continued personnel losses in Ukraine.[27]

Russian occupation authorities continued to face challenges with effective economic integration of occupied areas of Ukraine. Russian Telegram channel Rybar reported that farmers in occupied Kherson Oblast are experiencing logistical, supply-side, and economic problems with integration into the Russian market—a sign that Russian authorities have not yet developed consistent economic agendas to incorporate Ukrainian agricultural output into the Russian economy.[28] Rybar claimed that the wait times at border areas make perishable goods essentially impossible to import to Russia from Kherson Oblast and devalues products exported from Kherson on the Russian market.[29] According to Ukraine’s Center for Strategic Communications and Information Security, over 22 million tons of grain remain blocked in Ukrainian warehouses due to the Russian invasion.[30] Taken together, these reports suggest that Russia is failing to institute effective export practices and economic processes for Ukrainian assets—to the detriment of the livelihoods of residents of occupied areas.