Luhansk Oblast Administration Head Serhiy Haidai stated that Russian forces are not conducting an operational pause as of July 8 and are continuing to shell settlements and deploy additional tank units to Donbas.[1] Haidai’s statement likely reflects confusion about the meaning of the expression “operational pause” and how such a “pause” actually manifests on the ground in a war. US military doctrine considers the role of operational pauses in warfighting and campaigning in some detail.[2] It notes that “Normally, operational pauses are planned to regenerate combat power or augment sustainment and forces for the next phase.” It observes that “The primary drawback to operational pauses is the risk of forfeiting strategic or operational initiative.” It therefore recommends that “If pauses are necessary, the [commander] can alternate pauses among components to ensure continuous pressure on the enemy or adversary through offensive actions by some components while other components pause.” Soviet military theory regarded operational pauses in a similar fashion—sometimes necessary, but always dangerous.

The Russian military command, which announced an operational pause on July 7, has apparently recognized the need for a pause given the state of Russian forces at this point in the campaign. The Russian troops that have completed the seizure of Severodonetsk and Lysychansk are clearly in need of regenerating combat power and building up supporting capabilities, including supply, before launching another large-scale offensive operation. Numerous reports from various sources show that they are engaged in both activities. They have naturally and necessarily ceased efforts to conduct large-scale offensive operations in this sector while they reorganized, reinforce, and resupply their tired troops—in other words, they are in an operational pause in this sector.

Recognizing the danger of allowing the Ukrainians to seize the initiative and go over to an offensive of their own, however, Russian forces continue to conduct more-limited offensive operations in this sector and elsewhere along the front line. Those operations involve smaller Russian forces than had been involved in the attacks on Severodonetsk and Lysychansk pursuing more limited and localized objectives with less determination and willingness to take casualties compared with their behavior during the fights for the two cities. When the Russian military command has determined that it has adequately prepared for a renewed major offensive operation, it will likely resume larger-scale ground offensives with more troops and a greater determination than it is currently showing. The transition out of the operational pause may be gradual and difficult to discern at once, just as the transition into it appeared gradual. Skillful campaign design aims to achieve precisely such an effect in order to persuade the enemy that no pause is contemplated or underway, or that it will be too short to be of benefit to the enemy, and thereby convince the enemy that it does not have the opportunity to seize the initiative and go over to a counter-offensive of its own. Russian campaign design, inadequate as it has generally been, is nevertheless good enough to manifest this basic principle of operational art.

Russian milbloggers are continuing to show rhetorical opposition to the Kremlin by faulting the Russian Defense Ministry for making Russian logistics vulnerable to the Ukrainian strikes via US-provided HIMARS rocket systems. Russian milbloggers are notably criticizing the Russian military command instead of expressing patriotic hatred toward Western suppliers of HIMARS as one would have expected of the ultra-nationalist, pro-war Telegram channels. Former Russian military commander Igor Girkin, an outspoken Russian nationalist who commanded militants during the Donbas war in 2014, stated that personnel of the Russian Defense Ministry’s logistics department should be tried for failing to disperse and camouflage ammunition depots.[3] Russian milbloggers Starshe Eddy and Russian officer Aleksey Suronkin echoed similar concerns over the effectiveness of HIMARS, calling on Russian forces to adapt to new threats and strike back against Ukrainian forces.[4] The continued trend of patriotic and pro-war Russian milbloggers blaming the Kremlin by default for setbacks and problems in the war may begin to create in effect a loyal opposition that could ultimately erode confidence in the milbloggers’ significant audience in Russia’s ability to win. 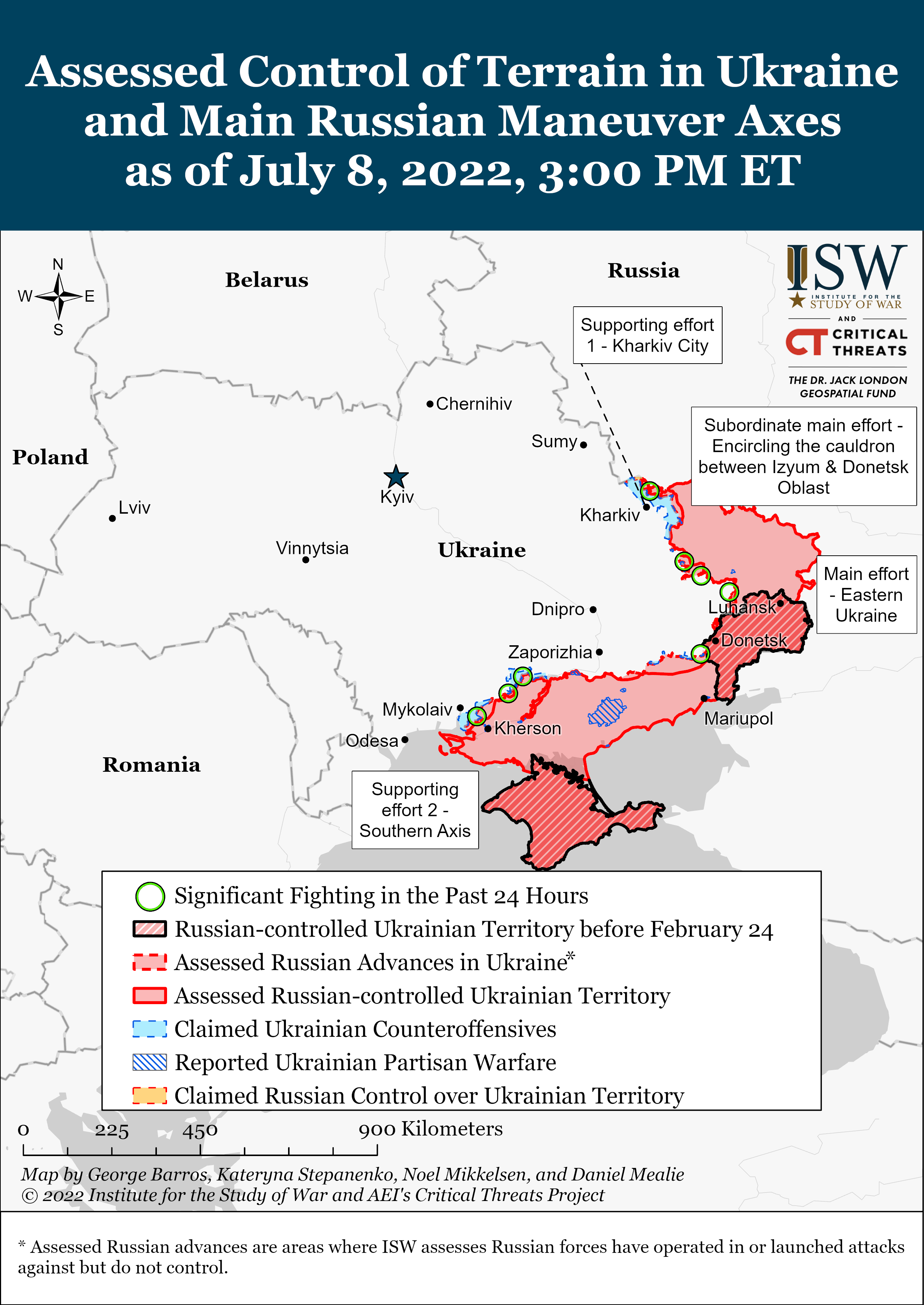 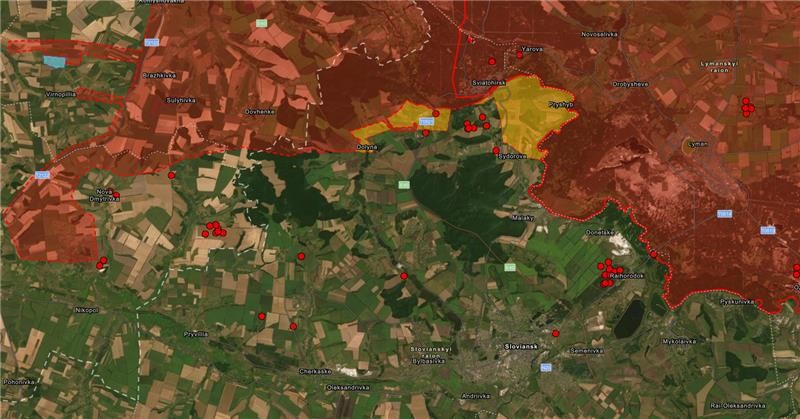 Russian forces continued to launch assaults in effort to reach Siversk from the Lysychansk area but did not make any confirmed territorial gains. The Ukrainian General Staff reported that Ukrainian artillery fire repelled Russian force from newly-established positions in Verknokamyanske (approximately 8 km east of Siversk).[8] Russian forces also unsuccessfully attempted to break through Ukrainian defenses around Spirne and Ivano-Daryvivka to reach Siversk from the southeast.[9] Russian forces also continued to shell Siversk and settlements northeast and east of Siversk.[10] The UK Defense Ministry noted that Russian forces are concentrating equipment in the Siversk direction, possibly to resume frontal assaults on Ukrainian positions in the settlement in the near future.[11]

Russian forces did not conduct offensive operations around Avdiivka and continued to shell and launch airstrikes in the area.[15] 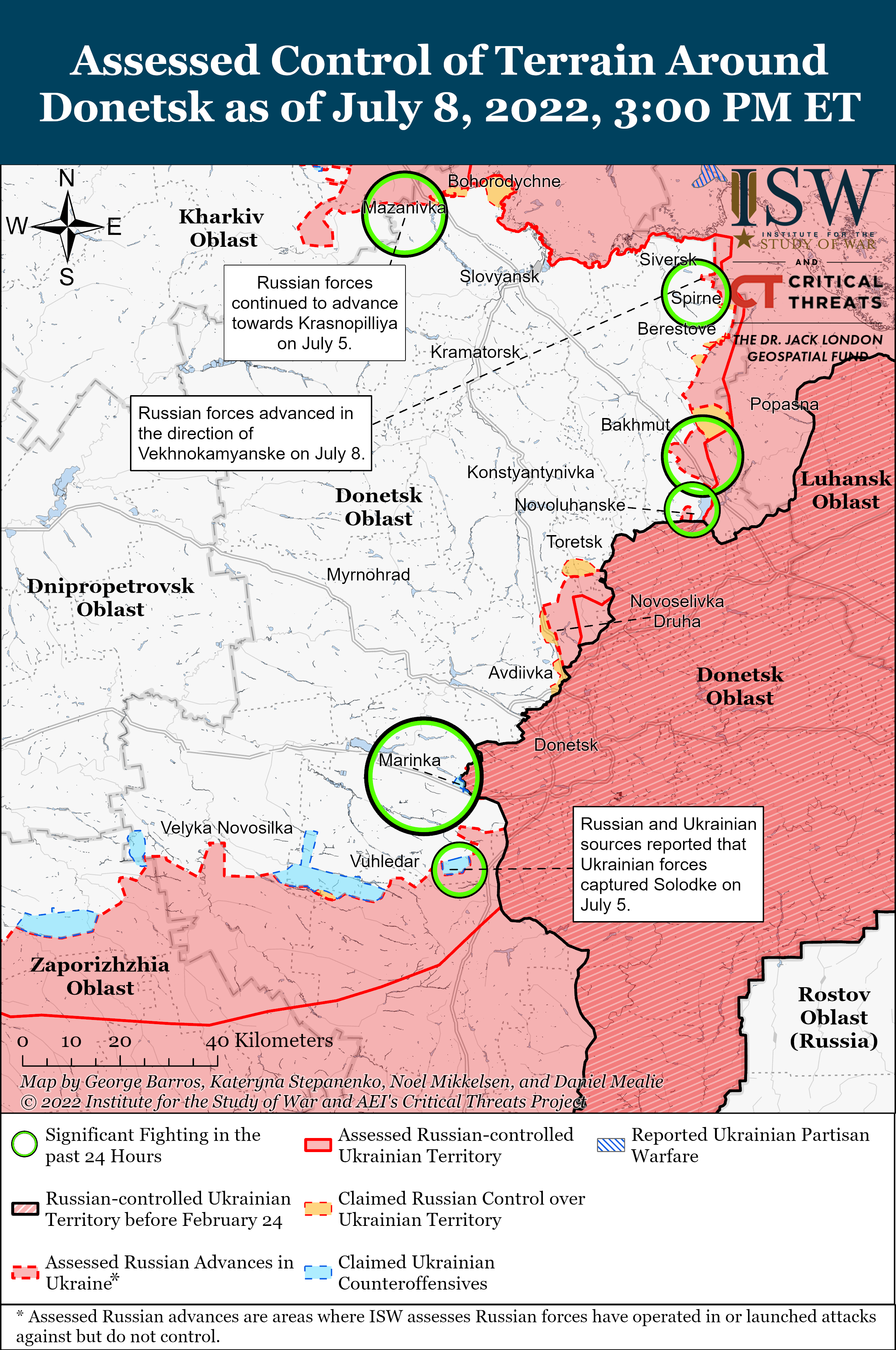 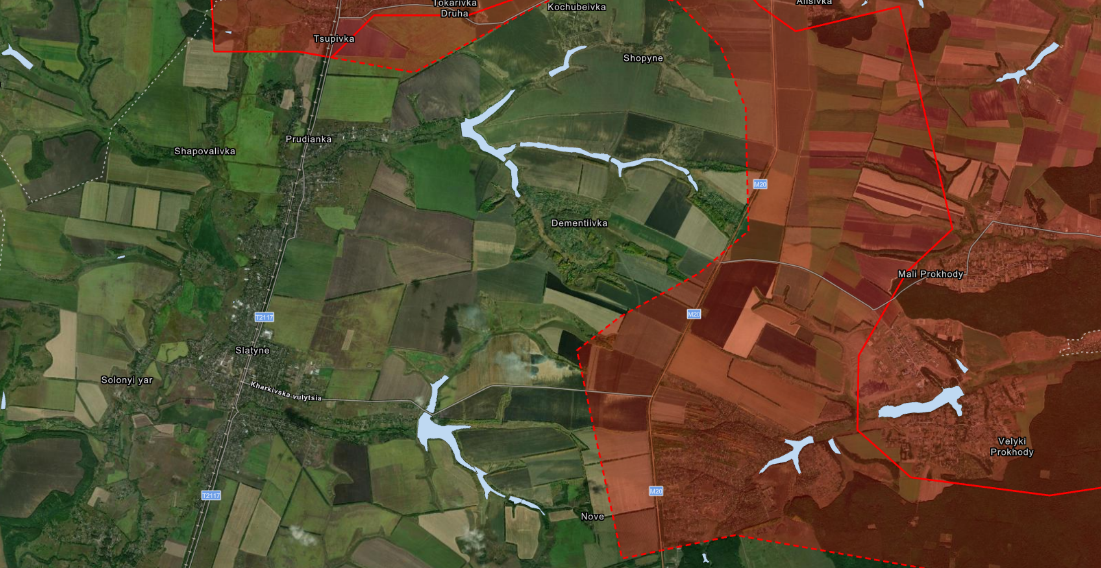 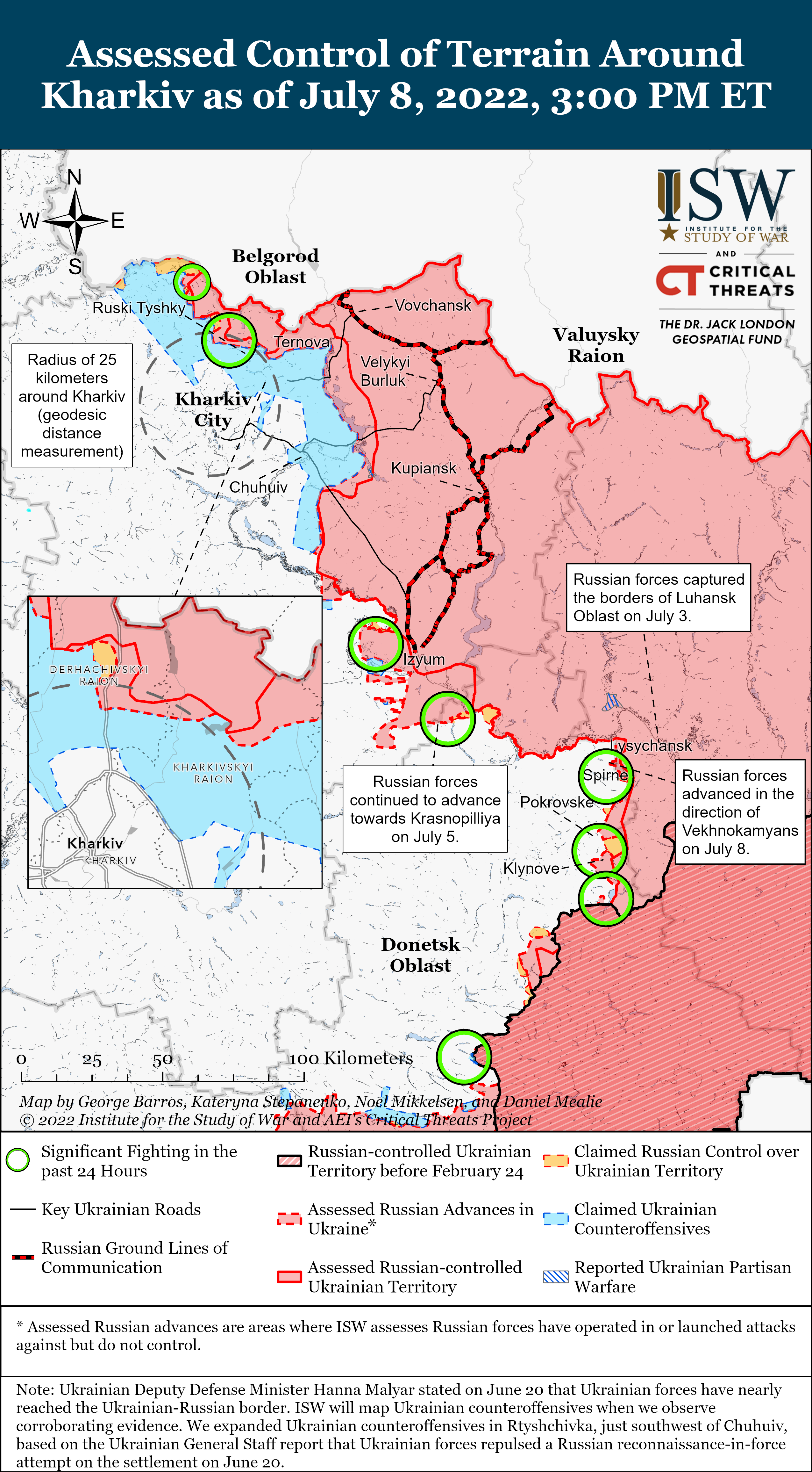 Russian forces continued to attack settlements along the Kherson-Mykolaiv and Kherson-Dnipropetrovsk Oblasts borders in an effort to retake lost positions. The Ukrainian General Staff reported that Ukrainian forces repelled Russian attack on Velyke Artakove, on the western bank of the Inhulets River.[19] Russian forces are likely attempting to push Ukrainian forces from their positions on the eastern bank in Lozove. The Ukrainian Southern Operational Command noted that Ukrainian missile and artillery units repelled Russian reconnaissance attempts and struck a Russian ammunition depot in the Vysokopillya area on the Kherson-Dnipropetrovsk Oblast border.[20] Ukrainian forces reportedly struck other Russian ammunition depots and concentration areas near Davydiv Brid, Pravdyne, and Nova Kakhovka.[21] Ukrainian aviation continues to successfully strike Russian positions in Kherson Oblast, which could indicate that Russian force lack sufficient air defense systems in the area.[22] 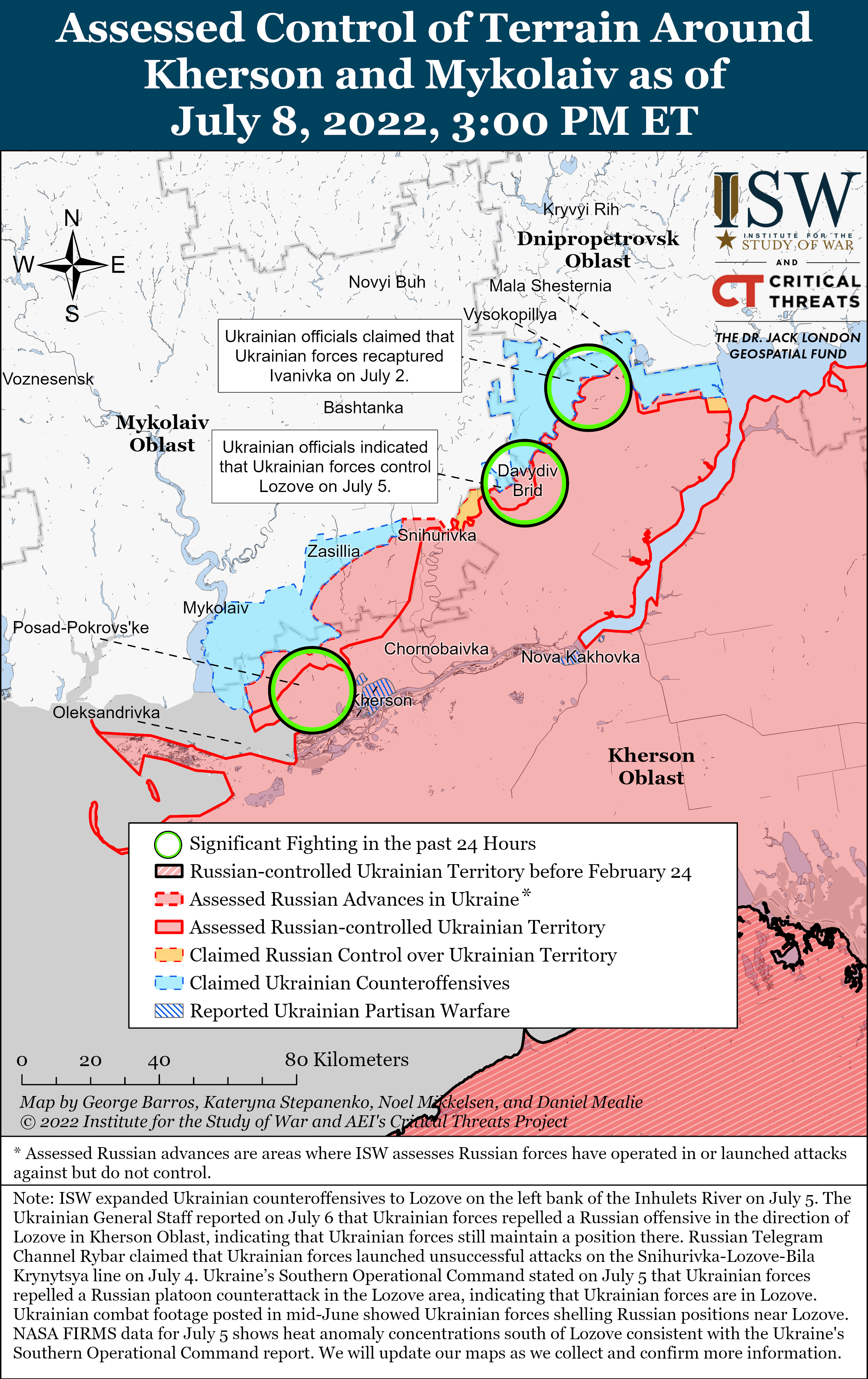 The Russian Federation Council approved a bill on July 8, granting veteran statuses to civilian personnel participating in the “special military operation in Ukraine.”[25] The bill would entitle civilian personnel of the Russian Armed Forces, repair brigades, and medical staff to veteran benefits and pension. The Kremlin is likely attempting to incentivize more Russians to participate in the war effort, but these measures also commit the Russian budget to a long-term obligation to financially support more veterans.

The BBC published a report examining the geographic origins and breakdown by rank, service, and other factors of the 4,515 Russians whose deaths in Ukraine it was able to confirm. The report is not exhaustive. The BBC confirmed that Russian forces have lost at least 773 officers since the start of the invasion. The BBC reported that at least four generals, 21 colonels, 126 majors, and 568 junior officers had died as of July 7.[29] The BBC also found that 890 motorized riflemen and 888 servicemen of the Russian Airborne died in combat, out of 4,515 total deaths across the Russian Armed Forces that the BBC was able to confirm. Russian National Guard (Rosgvardia) and Special Forces lost 162 and 111 servicemen, respectively. The BBC confirmed that 49 pilots and crew of the Russian Air Forces died in combat.

Russian occupation authorities continued to undertake measures to set conditions for the annexation of southern Ukraine. Russian Ambassador to the United Kingdom Andrey Kelin said that Russia does not intend to leave southern Ukraine after capturing Donbas, asserting that the withdrawal would cause provocations and loss of civilian lives.[30] The Ukrainian Resistance Center noted that Russian occupation authorities are replacing Ukrainian collaborators in Kherson Oblast and Melitopol with Russian officials.[31] The Kremlin is also appointing Russian officials in the Donetsk and Luhansk People’s Republics (DNR and LNR), likely to recruit personnel to facilitate the unilateral annexation of Donbas and southern Ukraine.[32] The Ukrainian Resistance Center also reported that Russian occupation authorities are bribing residents of occupied territories with 10,000 rubles to receive Russian passports.[33] The Kremlin continues “passportization” efforts to ensure permanent control over occupied territories.