The Kremlin has likely used a leaked letter from mothers demanding the ban of journalist activity on the frontlines to promote self-censorship among pro-Russian milbloggers and war correspondents. Russian opposition outlet Meduza released a letter from mothers of an Astrakhan-based platoon that blamed Kremlin-sponsored Izvestia war correspondent Valentin Trushnin for reporting the details of Russian positions in a way that led to the deaths of their sons.[6] Meduza removed the letter from its website on July 8. First Deputy of the Donetsk People’s Republic (DNR) Information Minister and milblogger Daniil Bezsonov reported noticing suggestions from unspecified “faceless experts” to censor his posts regarding Russian war efforts.[7] Bezsonov noted that Russian war correspondents received necessary accreditations from the Kremlin and follow protocol when reporting from the frontline to refrain from exposing Russian positions. Bezsonov also argued that Russian war correspondents took the initiative to keep Russians updated on the situation on the front line from the first days of the war, while Russian “big bosses” failed to launch an information campaign to counter claimed Ukrainian information warfare. Several Russian milbloggers shared Bezsonov’s remarks, with proxy serviceman Maksim Fomin stating that Russian Defense Ministry briefings are not sufficient to replace combat footage.[8]

The Kremlin faces challenges directly censoring pro-Russian milbloggers and war correspondents but will likely continue to look for opportunities to promote self-censorship. Moscow has not demonstrated the ability to compel Telegram to delete or control the content of channels, and so would likely have to threaten individual milbloggers with legal or extra-legal action to stop them from publishing on that platform. Russia could prevent war correspondents publishing in regular media outlets from writing stories or deprive them of access to the front lines. But both the milbloggers and the war correspondents are explicitly pro-war and patriotic, often ultra-nationalist, with large followings likely concentrated among Russian President Vladimir Putin’s key supporters. Threatening or suppressing them directly could backfire if Putin’s motivation in doing so is to stop them from undermining support for the war or questioning authority. Actions such as the use of this leaked and possibly faked letter to stoke self-censorship or induce pressure from the readers of these blogs and articles toward self-censorship may be an effort to achieve the Kremlin’s desired effects without the risk of having them backfire. 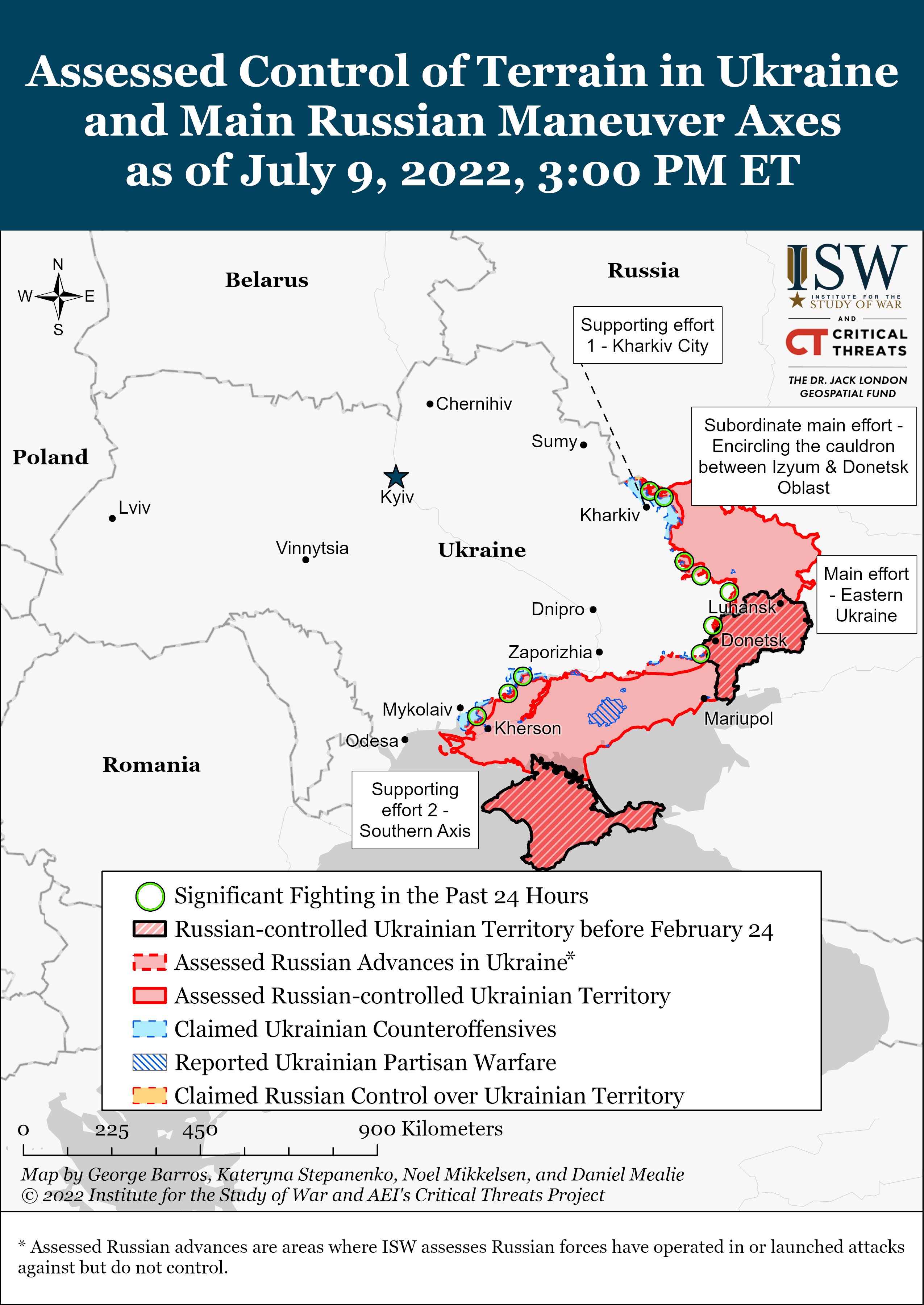 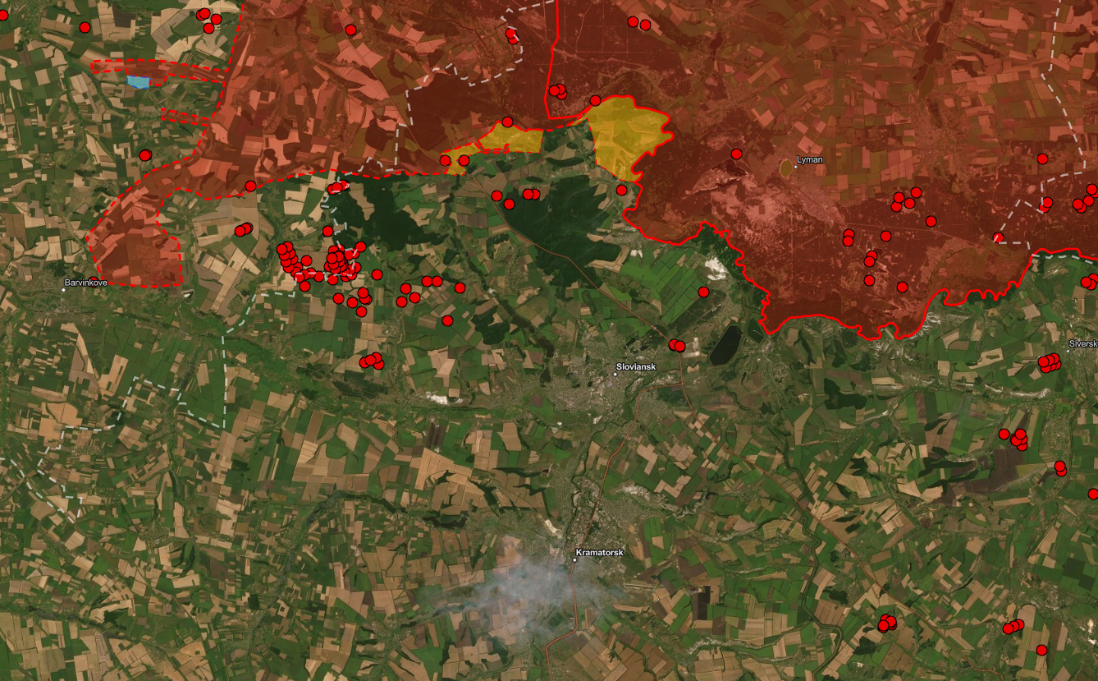 Russian forces unsuccessfully attempted to improve their tactical positions around Avdiivka and launched a failed assault on Marinka on July 9.[20] 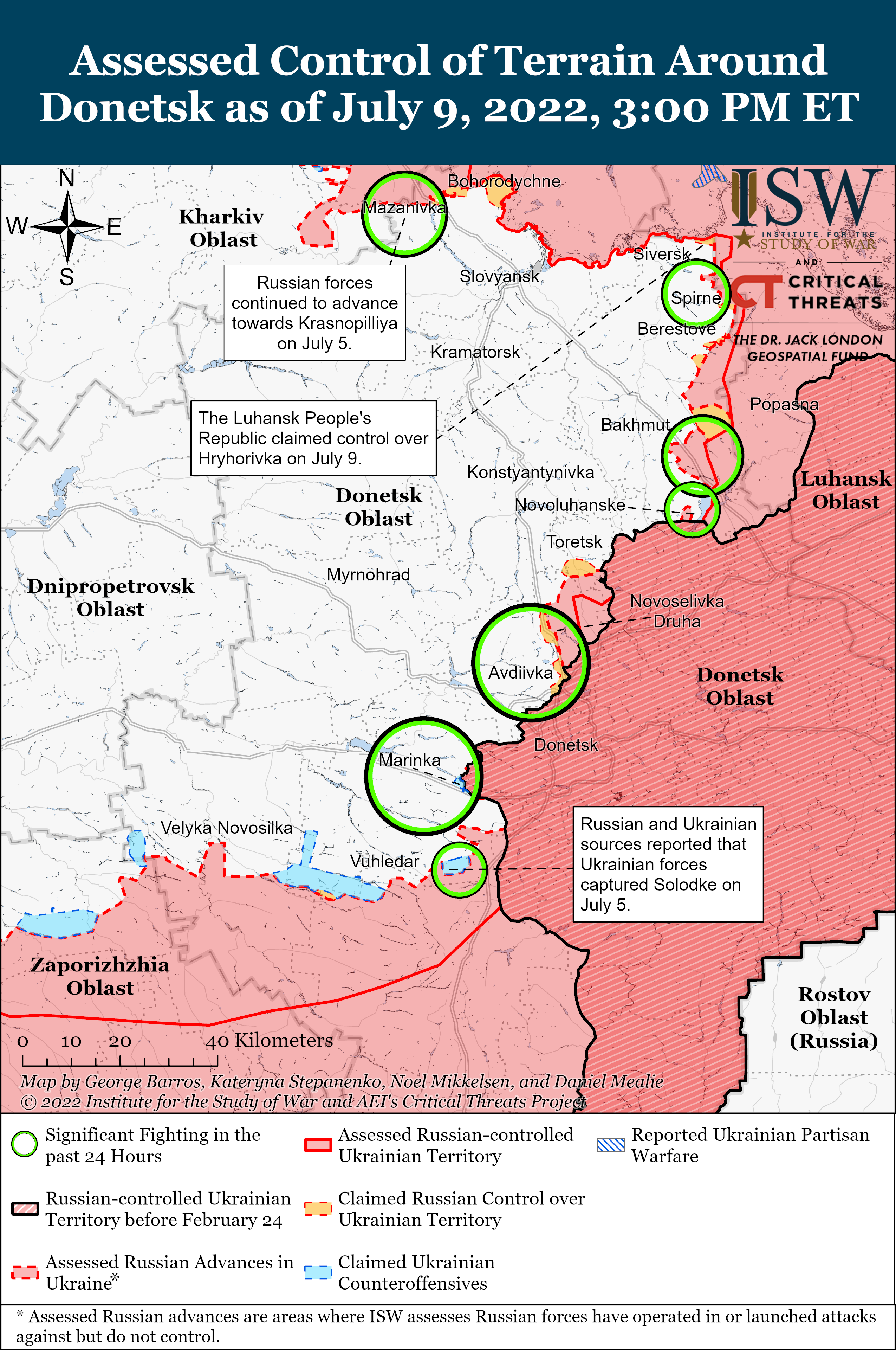 Russian forces made no confirmed territorial gains near Kharkiv City on July 9 but continued attempting likely spoiling attacks to disrupt Ukrainian counterattacks. The Ukrainian General Staff reported that Ukrainian forces repelled a Russian assault in the direction of Kochubeivka and Dementiivka, which ISW assessed is intended disrupt ongoing Ukrainian counterattacks from Prudyanka north toward Russian positions in Tsupivka.[21] The Derhachi Regional Administration reported that fighting is ongoing in Kozacha Lopan, Tsupivka, Dementiivka, and Velyki Prokhody, all situated around the Ukrainian salient approaching the Russian GLOC on the E105 highway.[22] Russian forces are likely trying to prevent Ukrainian forces from disrupting Russian use of the E105 GLOC and advancing closer to the Kharkiv Oblast-Russia border. Kharkiv Oblast Administration Head Oleg Synegubov reported that Russian forces prioritized shelling agricultural fields, poultry complexes, landfills, and other open areas in Kharkiv Oblast during the day on July 9, presumably to damage Ukrainian agricultural activity.[23] 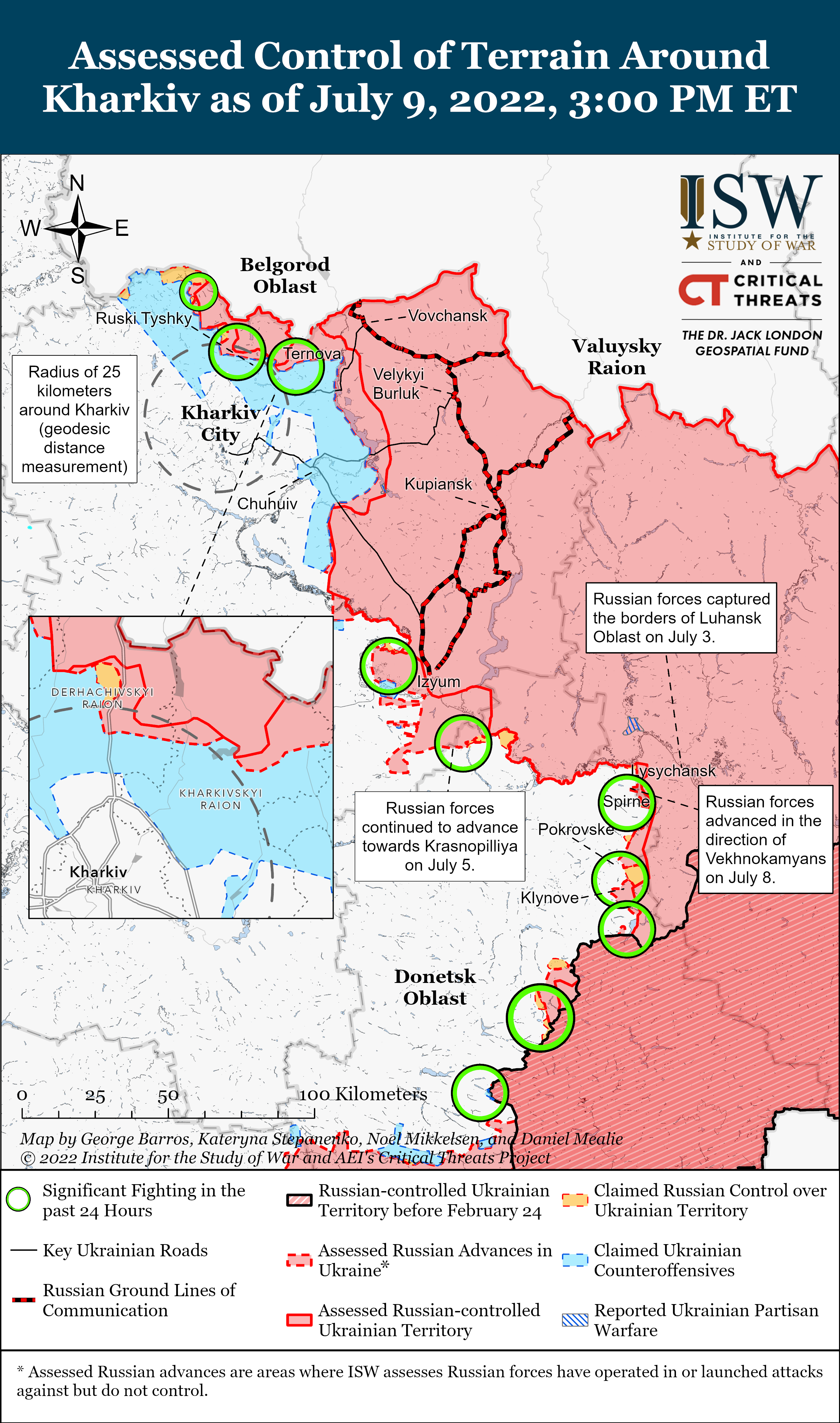 Ukrainian officials are also increasingly reporting that Russian forces are targeting Ukrainian fields during the harvest season in southern Ukraine and Donbas, but ISW cannot independently verify whether the field fires resulted from deliberate attacks.[29] The Russian Defense Ministry denied setting Ukrainian fields on fire by amplifying a claim that footage of Russians burning grain is an old video from Stavropol Krai, Russia.[30] 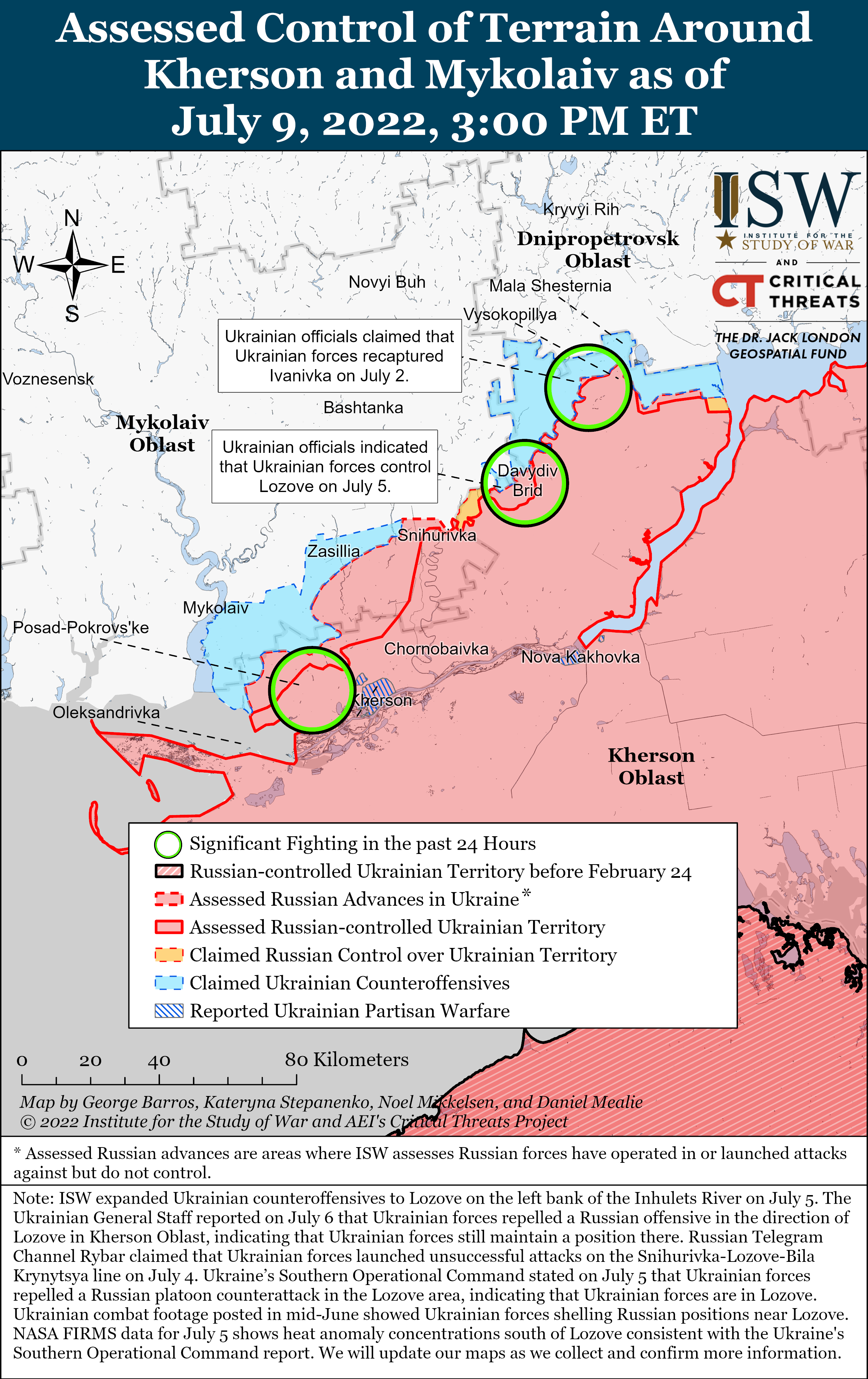 Russia’s use of stored and obsolescent MT-LB armored personnel carriers suggests that Russia’s materiel and force generation problems continue. The UK Ministry of Defense asserted that many current Russian reinforcements are “ad hoc groupings, deploying with obsolete or inappropriate equipment” as compared to better-equipped Russian first echelon units from the beginning of the war. The UK Ministry of Defense reported that an unspecified “large proportion” of the new Russian infantry units are probably deploying with MT-LB armored vehicles (which were designed in the 1950s) taken from long-term storage as their primary transport.[31] The UK Ministry of Defense asserted that most Russian first echelon assault units at the beginning of the Russian invasion were equipped with better BMP-2 infantry fighting vehicles (introduced in the 1980s). Combat footage posted between July 5 and July 9 shows several instances of Ukrainian forces destroying Russian MT-LBs near front lines.[32] The pattern of Russian forces using antiquated equipment pulled from storage is consistent with confirmed reports that Russian forces deployed a large number of old T-62 tanks to the Southern Axis in late May.[33]

Chechen Leader Ramzan Kadyrov is likely attempting to recruit more Chechen fighters for the war in Ukraine. Kadyrov promoted the ongoing construction of a new residential facility for fighters of the four Chechen battalions he claims to be forming and advertised the facility’s many quality amenities.[34] Kadyrov likely seeks to increase the attractiveness of military service benefits for fighters who join these forming battalions. Kadyrov first announced that he would form these four new battalions on June 26.[35]