Russian forces continue to struggle with generating additional combat-capable units. The UK Ministry of Defense reported on June 12 that Russian forces have been trying to produce more combat units by preparing to deploy third battalion tactical groups (BTGs) from some units over the last few weeks.[1] The UK MoD noted that Russian brigades and regiments normally can generate two BTGs, but doing so leaves the parent units largely hollow shells. The UK MOD concluded that these third BTGs will likely be understaffed and rely on recruits and mobilized reservists. Their deployment will likely adversely impact the capacity of their parent units to regenerate their combat power for quite some time. BTGs generated in this fashion will not have the combat power of regular BTGs. It will be important not to overestimate Russian reserves produced in this way by counting these third BTGs as if they were normal BTGs.

Pro-Russian sources are continuing to spread disinformation to sow anxiety and resentment among the Ukrainian population. Russian Telegram channels reportedly began spreading a fake mobilization order on June 12 that they falsely attributed to the Ukrainian General Staff. The fake order called for the mobilization of all eligible Ukrainian women to report for duty by “June 31” (sic). 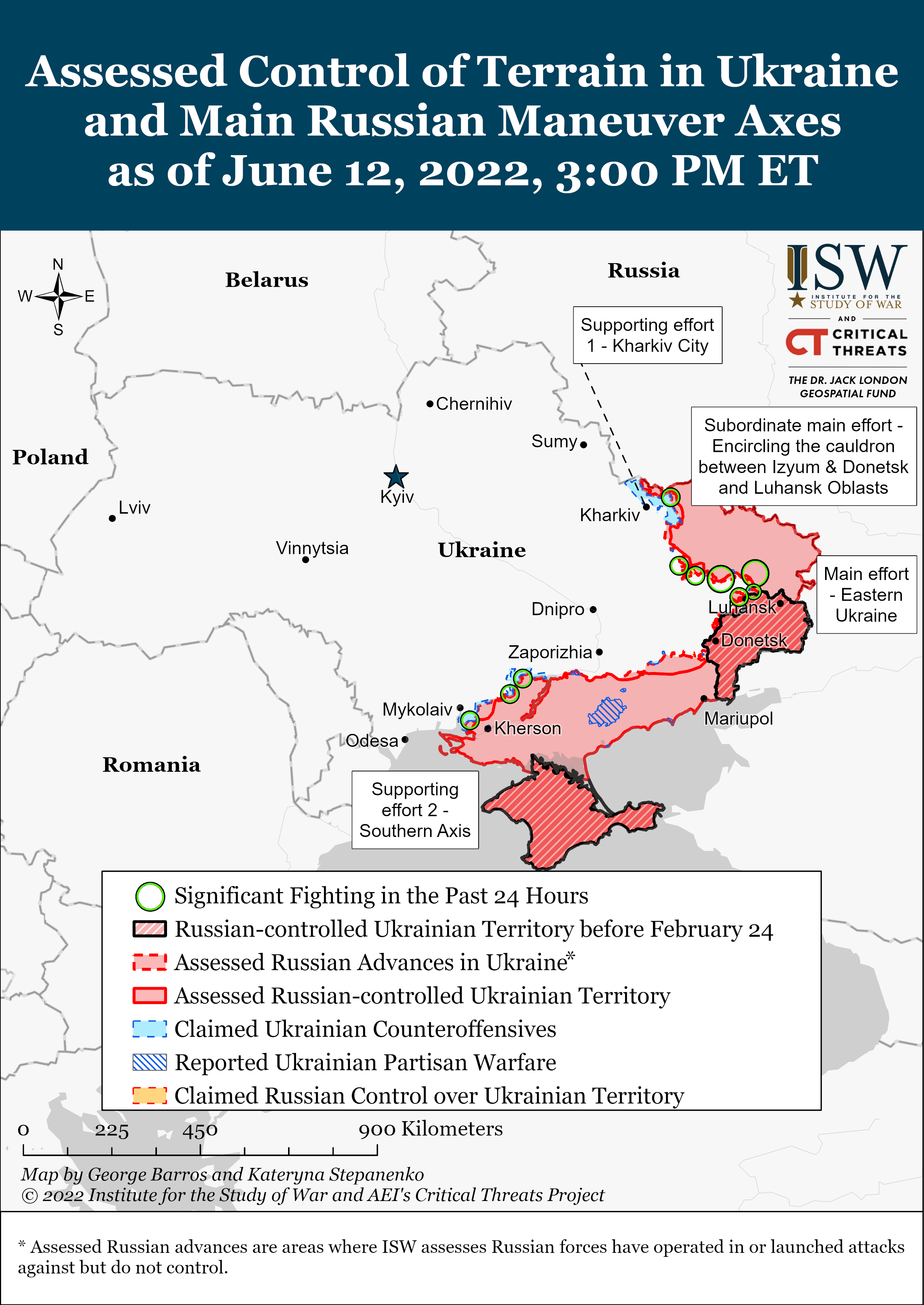 Russian forces continued ground assaults in and around Severodonetsk under the cover of heavy artillery fire but have yet to establish full control of the city as of June 12.[2] Ukrainian troops maintain control of the Azot industrial zone.[3] Head of the Luhansk Regional State Administration Serhiy Haidai stated that Russian forces destroyed two bridges across the Siverskyi Donets River between Severodonetsk and Lysychansk and are heavily shelling the third.[4]

Russian forces should, in principle, be seeking to seize the bridges rather than destroy them, since Russian troops have struggled to cross the Siverskyi Donetsk River. They could hope to trap Ukrainian defenders in Severodonetsk by cutting off their retreat, but it seems unlikely that the benefit of catching a relatively small number of defenders would be worth the cost of imposing a contested river crossing on Russian troops. The Russians likely expect instead to be able to break out of their positions either around Toshkivka or from Popasna to the north and then encircle Lysychansk or attack it from the west bank of the Siverskyi Donets, thereby obviating the need to seize the bridges or conduct an opposed crossing. Russian troops conducted another unsuccessful attack on Toshkivka, which is likely an effort to renew their drive north toward Lysychansk on the west bank.[5] 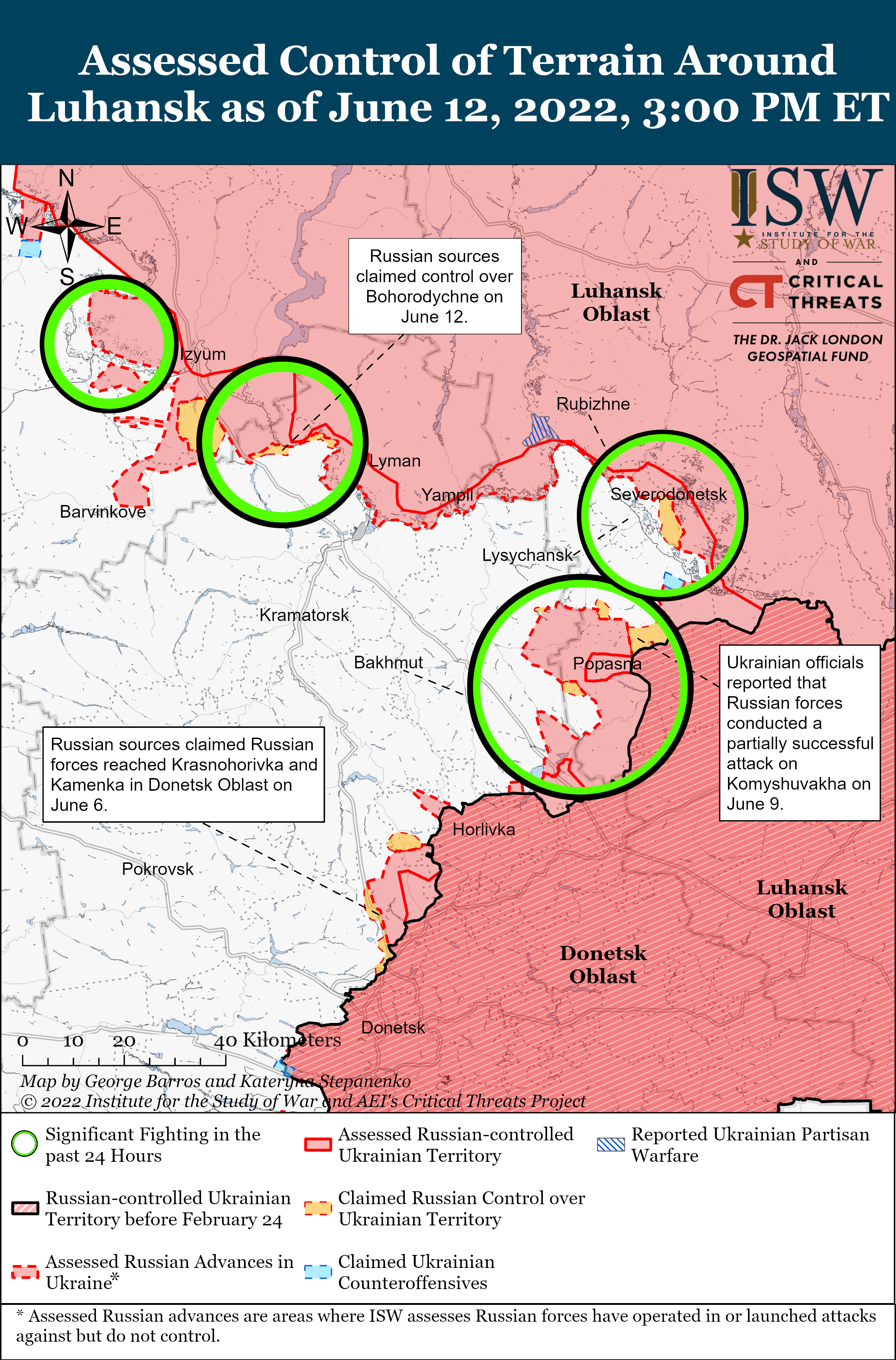 Russian forces continued attempts to advance southeast of Izyum toward Slovyansk and made incremental gains on June 12.[6] The Territorial Defense Force of the Donetsk People’s Republic (DNR) claimed that they took control of Bohorodychne, a settlement near the Kharkiv-Donetsk Oblast border about 20 km northwest of Slovyansk.[7] Russian forces additionally made unsuccessful attempts to advance on Dovhenke, Dolyna, and Mazanivka, all settlements between Izyum and Slovyansk.[8]

Russian forces continued ground and artillery attacks to the east of Bakhmut on June 12.[9] Russian troops reportedly conducted unsuccessful assault operations in Vrubivka and Mykolaivka, both settlements near the critical T1302 Bakhmut-Lysychansk highway.[10] Russian forces will likely continue to mount assault operations near the Bakhmut-Lysychansk highway to support the encirclement of Lysychansk. 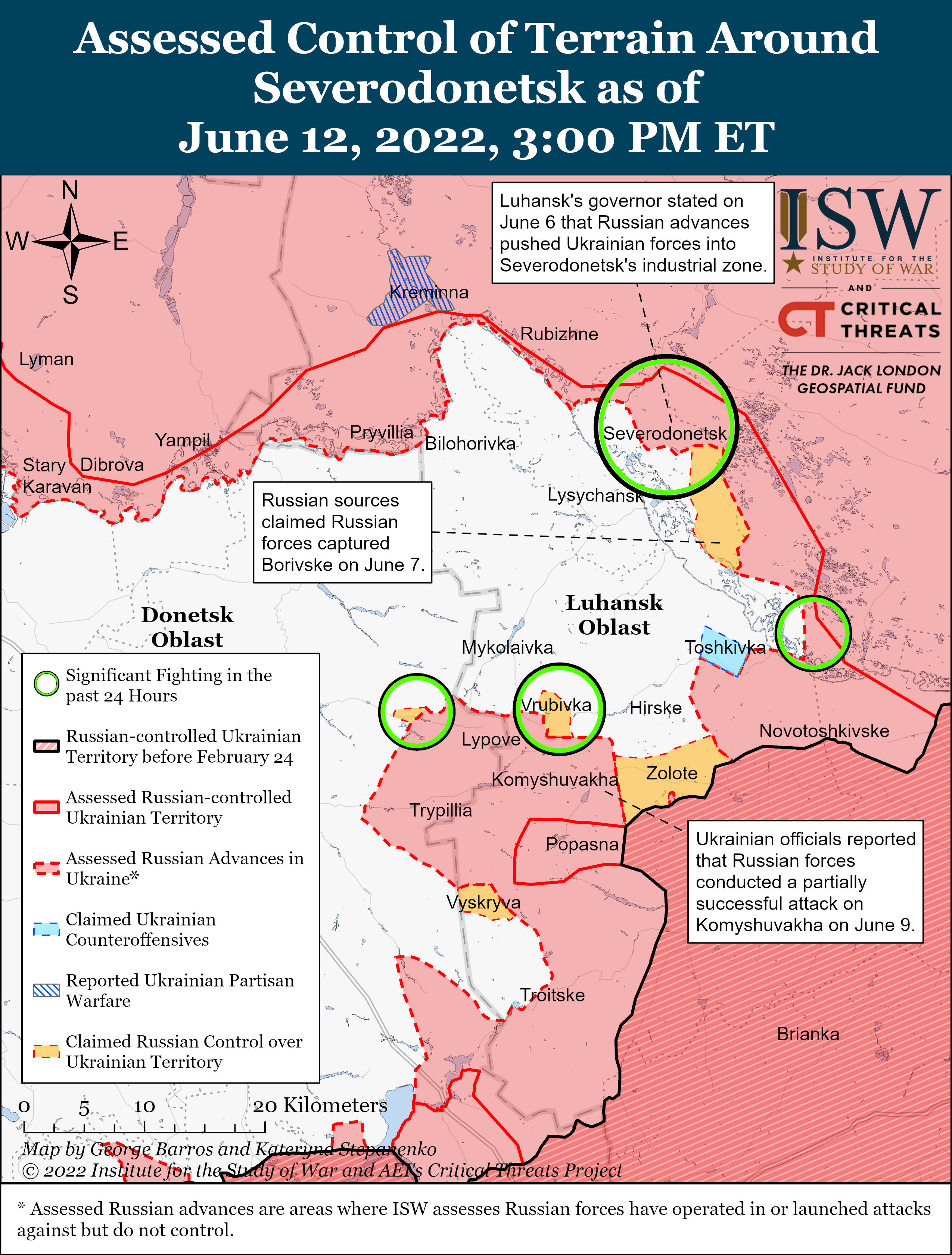 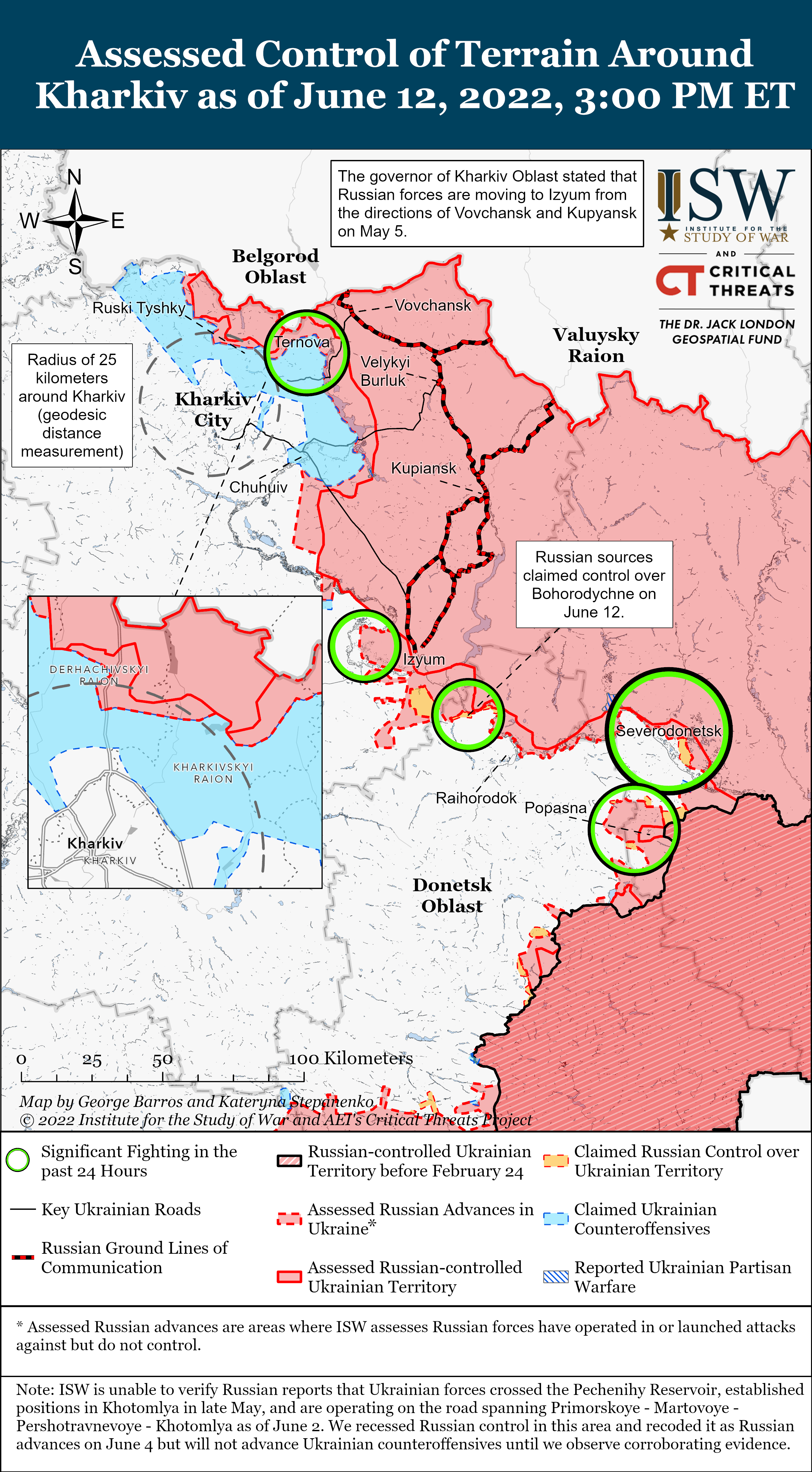 Russian forces focused on maintaining defensive lines and fired on Ukrainian positions along the Southern Axis on June 12.[14] The Zaporizhia Regional Military Administration stated that the main Russian effort in Zaporizhia lies on the Vasylivka-Orikhiv-Huliapole-Velyka Kostromka line in northeastern Zaporizhia Oblast near the Donetsk Oblast border.[15] Russian forces additionally fired on various locations in Kherson, Zaporizhia, and Dnipropetrovsk Oblasts.[16] 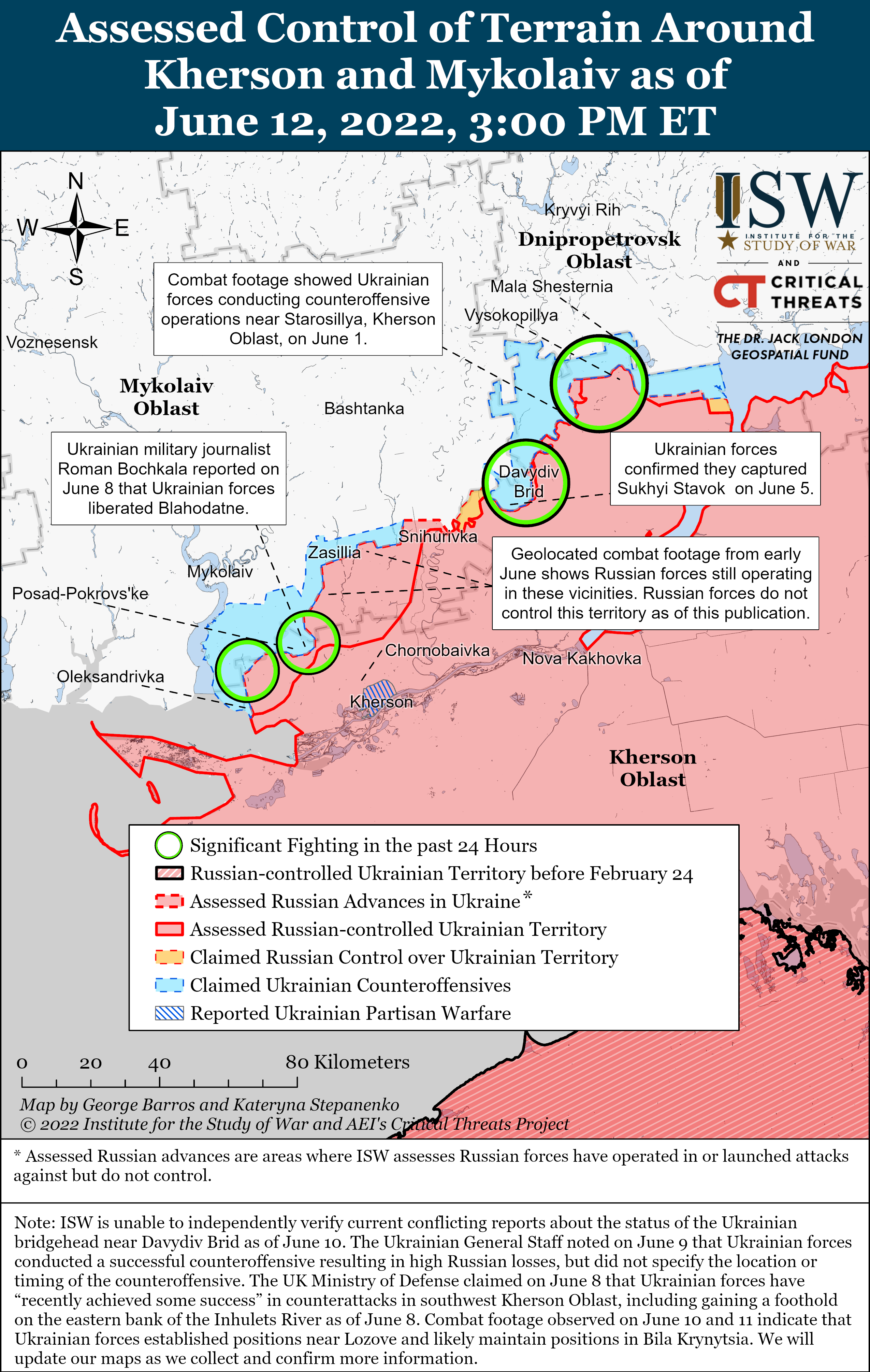 Russian occupation authorities used the occasion of Russia Day (the day of adoption of the declaration of Russian state sovereignty after the collapse of the Soviet Union) to further consolidate administrative control of occupied territories on June 12. Russian-back authorities in the occupied cities of Berdyansk and Melitopol accused Ukrainian partisans of conducting two separate IED attacks on infrastructure in the Russian-held towns.[17] However, Ukraine’s Southern Operational Command warned that Russian forces were preparing for a series of false-flag attacks in occupied regions on Russia Day, likely to accuse Ukrainian forces of conducting attacks against civilians, harm public perception of Ukrainian partisan activity, and galvanize pro-Russian sentiments.[18] ISW cannot independently assess whether these claims attacks are genuine partisan activity or part of a Russian false-flag campaign.

Head of the Donetsk People’s Republic (DNR) Denis Pushilin met with the governor of Russia’s Leningrad Oblast, Alexander Drodzenko, to secure his patronage for Yanikevo and Vuhledar, two towns in Donetsk Oblast with pre-war populations of 77,000 and 14,000, respectively.[19] Leningrad Oblast has a population of over 1,000,000 and is one of the most significant and wealthy areas of Russia.[20] It would have been far more appropriate for Leningrad Oblast to patronize a significant port city such as Mariupol. Its commitment instead to two small and insignificant towns suggests a certain lack of enthusiasm by Russian regional officials to take on the burdens of rebuilding large areas that Russian forces obliterated in the process of seizing.