Russian forces continued to make incremental, grinding, and costly progress in eastern Ukraine on June 2. Russian troops continued operations to capture Severodonetsk and further operations to capture Lysychansk. Russian military leadership will likely use the capture of these two cities to claim they have “liberated” all of Luhansk Oblast before turning to Donetsk Oblast but Russian forces are unlikely to have the forces necessary to take substantial territory in Donetsk Oblast after suffering further losses around Severodonetsk. Russian forces are evidently limited by terrain in the Donbas and will continue to face challenges crossing the Siverskyi Donets River to complete the encirclement of Severodonetsk-Lysychansk and make further advances westward of Lyman towards Slovyansk via Raihorodok.[1]

Russian military leadership continues to experience complications with sufficient force generation and maintaining the morale of mobilized personnel. The Ukrainian General Staff reported that the Donetsk People’s Republic’s (DNR) 1st Army Corps, under Russia’s 8th Combined Arms Army, is conducting forced mobilization in occupied areas of Donetsk Oblast.[2]  Russian forced mobilization is highly unlikely to generate meaningful combat power and will exacerbate low morale and poor discipline in Russian and proxy units. The 113th Regiment of the DNR posted a video appeal to Russian President Vladimir Putin on June 2 wherein forcibly-mobilized soldiers complain they have spent the entire war on the frontline in Kherson without food or medicine, and that mobilization committees did not conduct requisite medical screenings and admitted individuals whose medical conditions should have disqualified them from service.[3] Ukraine’s Main Intelligence Directorate additionally released an intercepted phone conversation wherein DNR soldiers similarly complained that physically unfit individuals were forced into service and that mobilized units are experiencing mass drunkenness and general disorder.[4] Russian forces are additionally struggling to successfully rotate servicemen in and out of combat. Spokesperson for the Odesa Military Administration Maksym Marchenko stated that 30 to 40% of Russian personnel that rotated out of Ukraine refused to return, forcing Russian commanders to send unprepared and unmotivated units back into combat.[5] This is consistent with complaints made by DNR servicemen that rotation practices are contributing to poor morale and dissatisfaction within units that have been forcibly mobilized.[6] 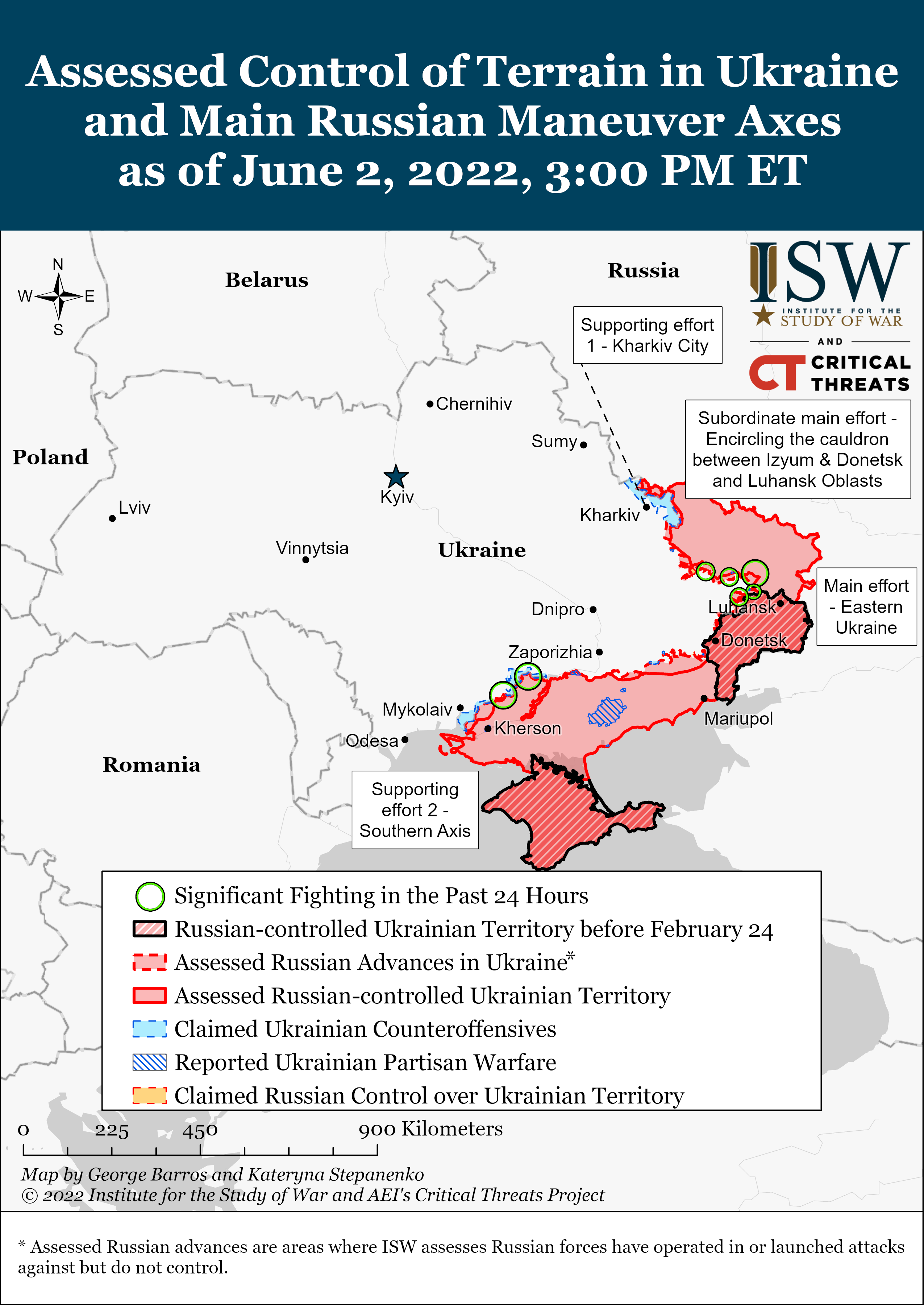 Russian forces conducted limited unsuccessful attacks and continued efforts to resume larger-scale offensives southeast of Izyum towards Slovyansk on June 2. The Ukrainian General Staff reported that Russian forces focused on maintaining their current positions southeast of Izyum and shelled Dovhenke, Kurulka, Virnopillya, and Dolyna in order to set conditions to renew offensive operations towards Slovyansk.[8] Russian forces additionally conducted unsuccessful assault operations around Studenok, Sosnove, Svyatohirsk, and Yarova, several settlements southeast of Izyum along roadways connecting to the Izyum-Slovyansk highway near the Kharkiv-Donetsk Oblast border.[9] Russian troops likely seek to capture this highway to exploit road access to support advances on Slovyansk. Russian forces in the Lyman reportedly attempted an additional, unsuccessful assault on Raihorodok, northeast of Slovyansk.[10]Russian forces attempting to advance on Slovyansk from both Izyum and Lyman remain largely stalled and are unlikely to make significant progress in the coming days, particularly as the majority of Russian forces continue to focus on Severodonetsk.

Russian forces continued ground assaults in and around Severodonetsk on June 2.[11] Head of the Luhansk People‘s Republic (LNR) Leonid Pasechnik claimed that the LNR controls all of Luhansk Oblast except for Severodonetsk and Lysychansk.[12] Deputy Chief of the Main Operations Department of the Ukrainian General Staff Oleksiy Gromov notably stated that despite Russian efforts to surround Severodonetsk, Ukrainian troops do not need to fully withdraw from the city.[13] Russian forces conducted unsuccessful ground attacks to the south of Severodonetsk-Lysychansk in Bobrove and Ustynivka.[14] The UK Ministry of Defense stated that Russian forces will likely be inhibited in their attempt to advance into Lysychansk from Severodonetsk (if they are first able to capture Severodonetsk itself) due to the tactical challenge of crossing the Siverskyi Donets River.[15] The UK Ministry of Defense additionally noted that Russian forces will likely need a brief tactical pause to prepare for subsequent attempts to cross the Siverskyi Donets River if they intend further operations into Luhansk and Donetsk Oblasts. [16]

Russian forces continued ground, rocket, and artillery strikes around Donetsk Oblast on June 2.[17] Russian forces continued offensive operations to the east of Bakhmut around Komyshuvakha, Mykailivka, Vrubivka, Berestove, Bilohorivka, Svitlodarsk, and Nahirne in order to cut ground lines of communication (GLOCs) northeast of Bakhmut and support continuing but slow-moving operations to encircle Severodonetsk-Lysychansk from the south.[18] The DNR claimed that the Russian grouping in the Donetsk City-Avdiivka area made incremental gains around Avdiivka and reportedly broke through Ukrainian defenses in Verkhnotoreske, though ISW cannot independently confirm this claim.[19] 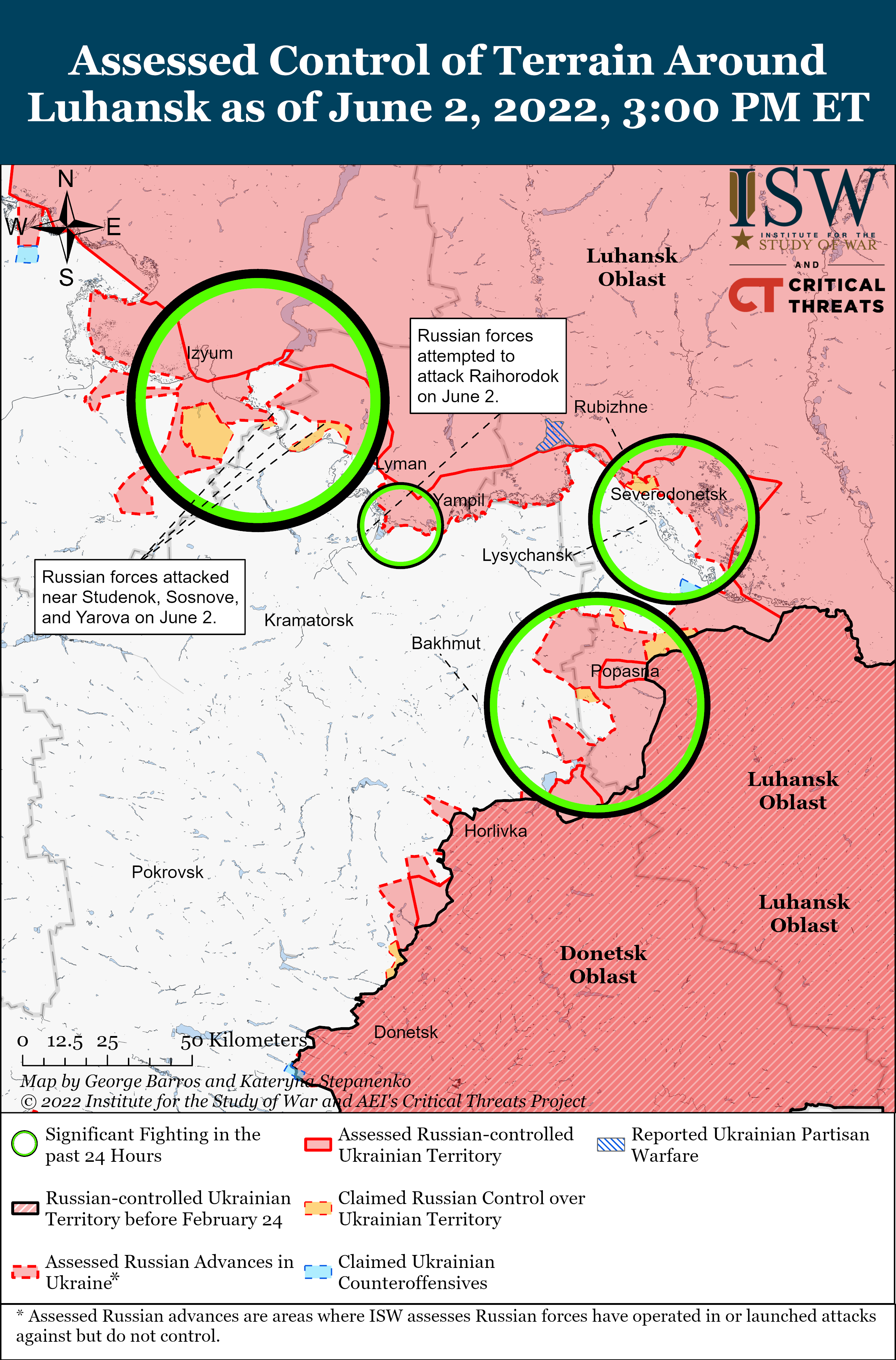 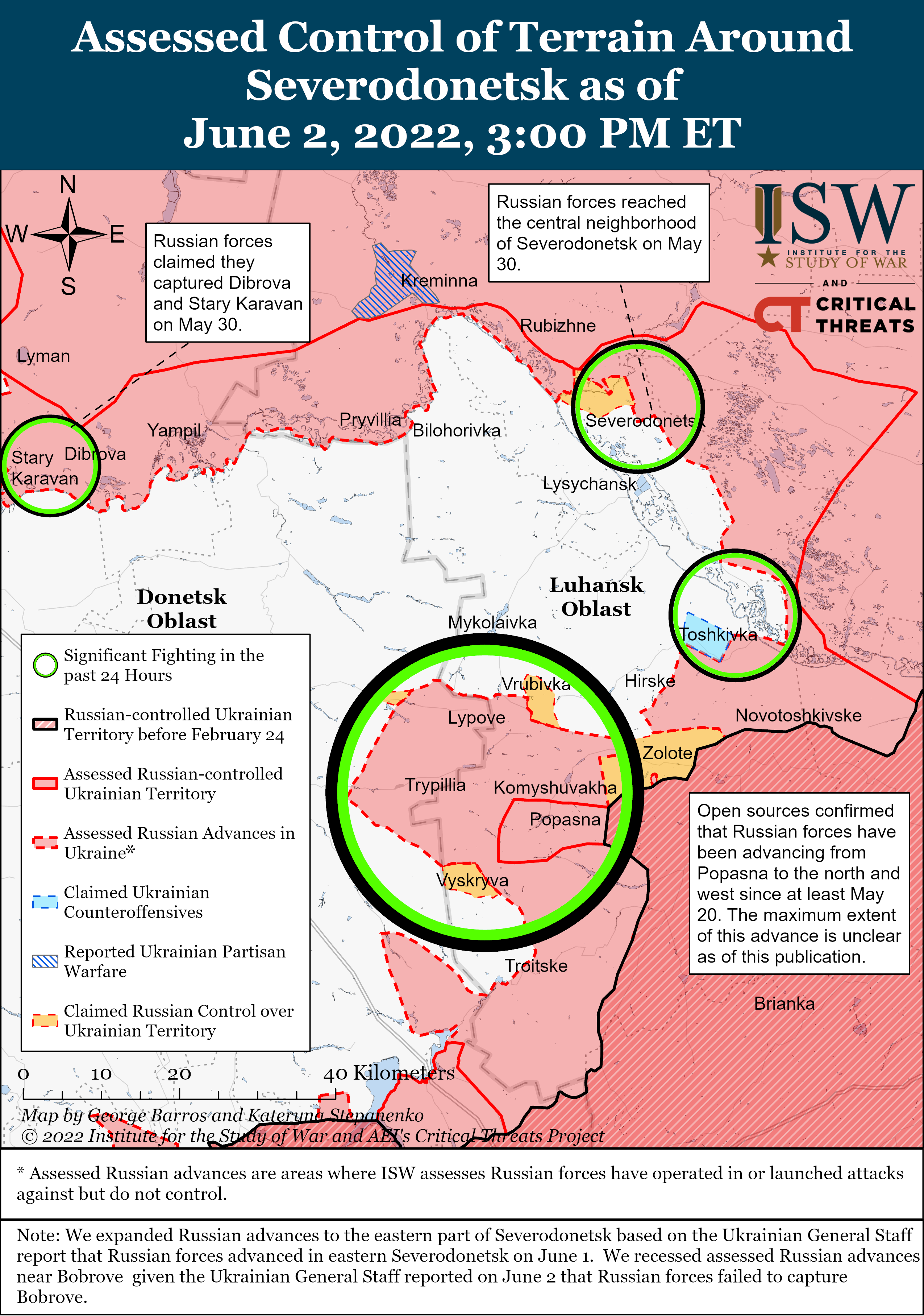 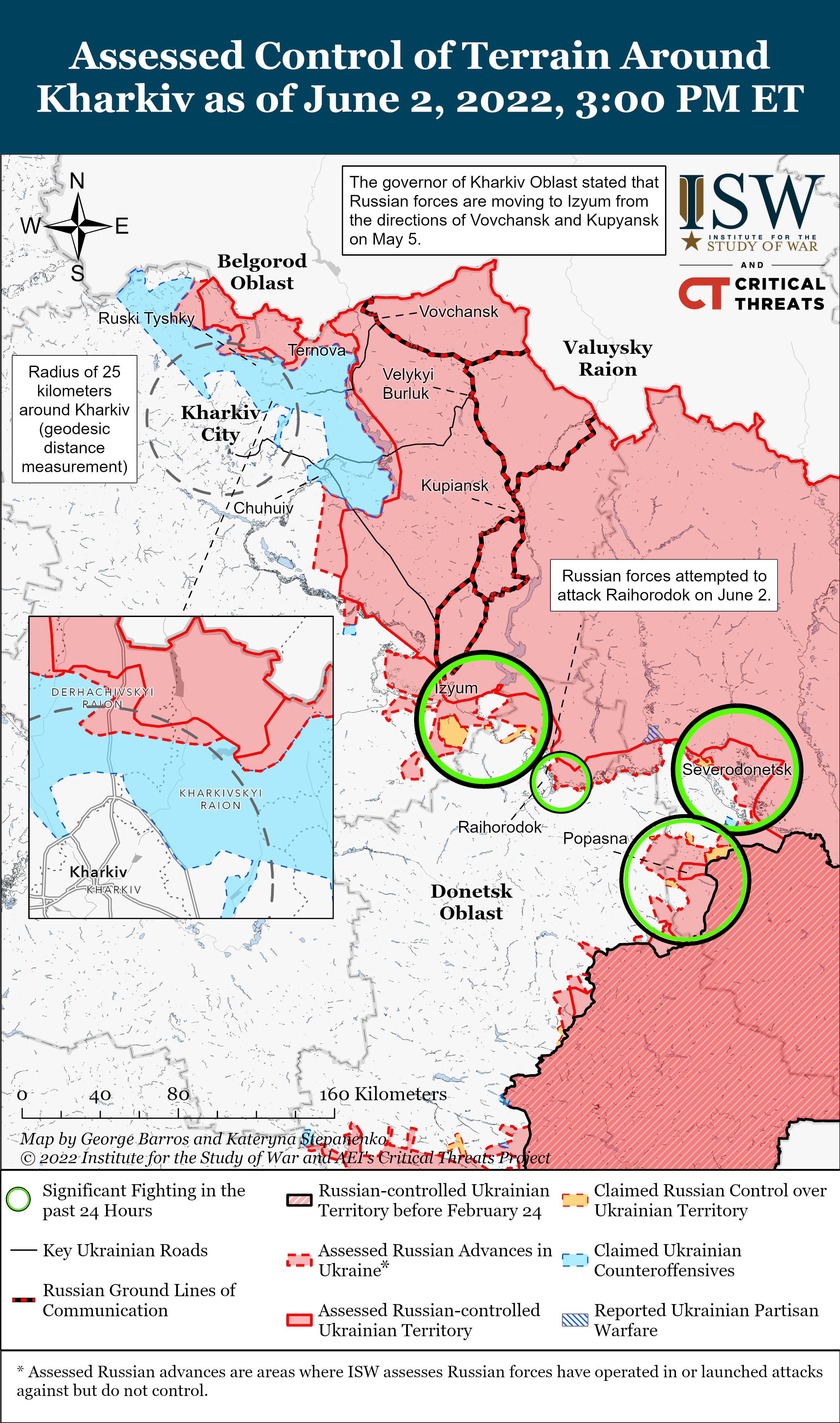 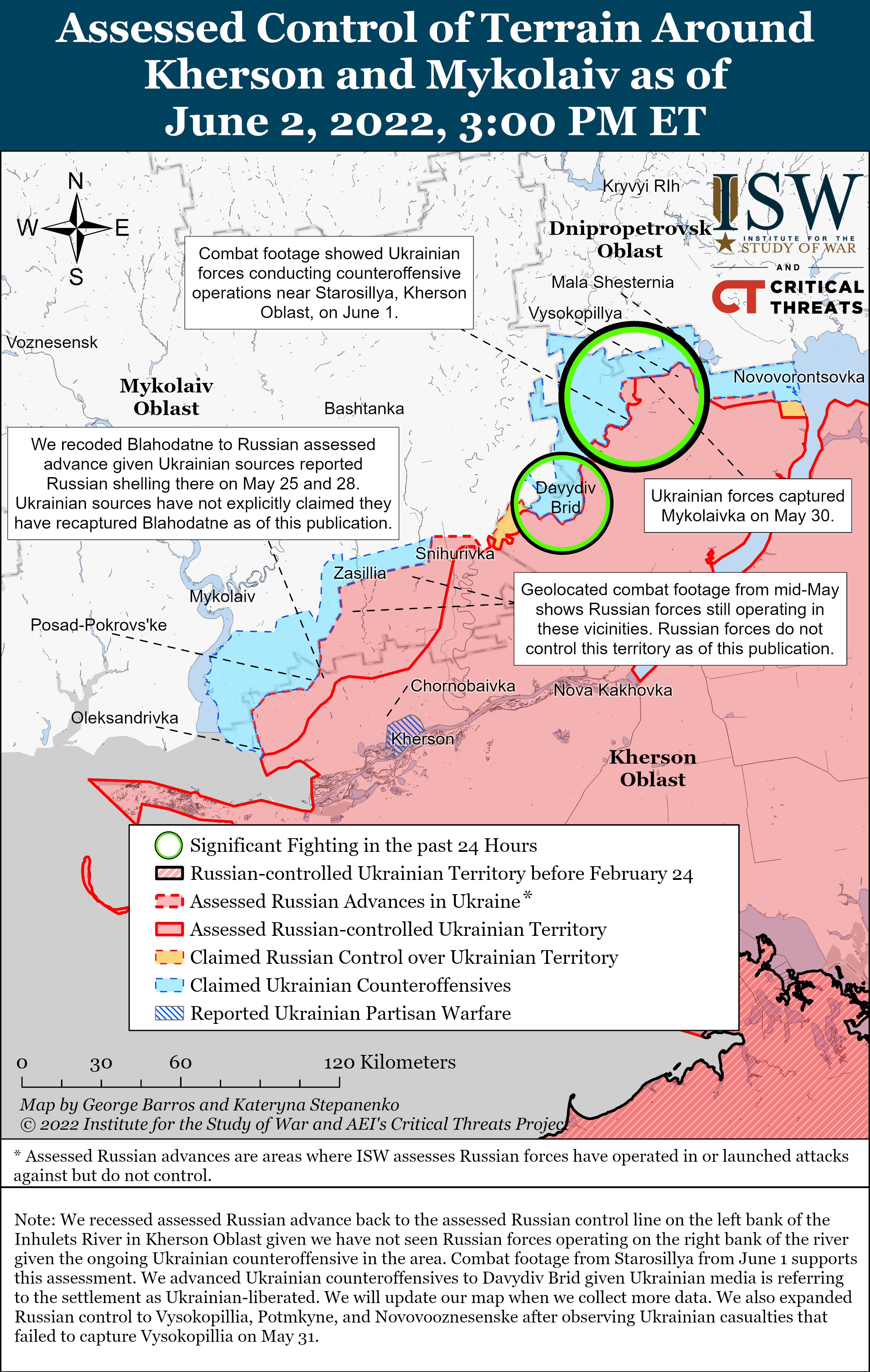 The Kremlin continues to send mixed signals about its plans to integrate occupied Ukrainian territories – likely indicating the Kremlin has not decided on a single course of action. Kremlin Spokesperson Dmitry Peskov said that a referendum to integrate Donbas to Russia is “hardly possible” without fully ensuring security in the region, but did not specify what the Kremlin would consider “ensuring security.”[30] Leader of the “Fair Russia” Party (part of the pro-Kremlin “systemic opposition” of parties not directly affiliated with Putin’s United Russia party but not posing any real opposition) Sergei Mironov said that any Ukrainian Oblast may join Russia, likely in support of other claims by Russian State Duma members that the Kremlin will annex Kherson, Donetsk, and Luhansk Oblast as soon as July.[31] Russian Senator Andrey Turchak announced the opening of a United Russia ”humanitarian center” in Kherson City and claimed to have negotiated industrial cooperation agreements between Kherson Oblast and Russia, but exact Russian plans for occupied Kherson remain unclear.[32] Russian-backed occupation authorities in Zaporizhia also announced the “nationalization” of Ukrainian state property, including the Zaporizhia Nuclear Power Plant (NPP), which could suggest that the Kremlin seeks to economically exploit newly occupied territories with or without direct annexation.[33] Russian Deputy Prime Minister Marat Khusnullin previously stated that the Zaporizhia NPP will exclusively work for Russia and will sell electricity to Ukraine.[34] Ukrainian state energy company “Energoatom” noted that Russia physically cannot export electricity from the Zaporizhia NPP as Russia is not connected to the Ukrainian or European energy grid.[35]

The fate of the Mariupol defenders taken prisoner by Russian forces remains unclear. Ukrainian Deputy Defense Minister Hanna Malyar reported that Ukrainian officials are discussing prisoner exchanges with Russian forces, but refused to comment on the status of the negotiations.[36] Russian sources claimed that members of the Ukrainian Azov Regiment are imprisoned in Olenivka, approximately 22 kilometers from Donetsk City.[37]