Russian forces are continuing to deploy outdated military equipment to Ukraine to replace losses. The Ukrainian Main Intelligence Directorate (GUR) reported on June 9 that Russian forces are mining Kherson Oblast with mines from the 1950s to defend against recent Ukrainian counterattacks in northwestern Kherson Oblast.[1] The GUR stated that Russian forces moved these mines from Russia’s Rostov Oblast to the Kherson area despite the fact the mines were meant to be destroyed. The GUR claimed that some of the mines detonated during the transportation processes and killed Russian sappers from the 49th Combined Arms Army. The GUR’s report is consistent with previous statements that Russian forces are moving old and obsolete equipment to Ukraine to make up for equipment losses, including deploying T-62 tanks to the Melitopol area and pulling MLRS and 152mm howitzers from storage in Irkutsk, Siberia.[2]

Russian military command continues to face pervasive issues with force generation. The Ukrainian Resistance Center reported that Russian officials in Luhansk Oblast have had to reduce their mobilization efforts due to widespread protests against aggressive mobilization efforts that have taken a toll on the labor market in Luhansk.[3] Attacks on Russian military recruitment offices are additionally continuing.[4] An unidentified assailant threw a Molotov cocktail at the military commissariat in Vladivostok, which is the eighteenth such reported attack on Russian territory since the beginning of the war. As Russian officials escalate mobilization efforts over the background of continued losses in Ukraine, they will continue to run the risk of instigating public dissent and pushback against such recruitment practices. 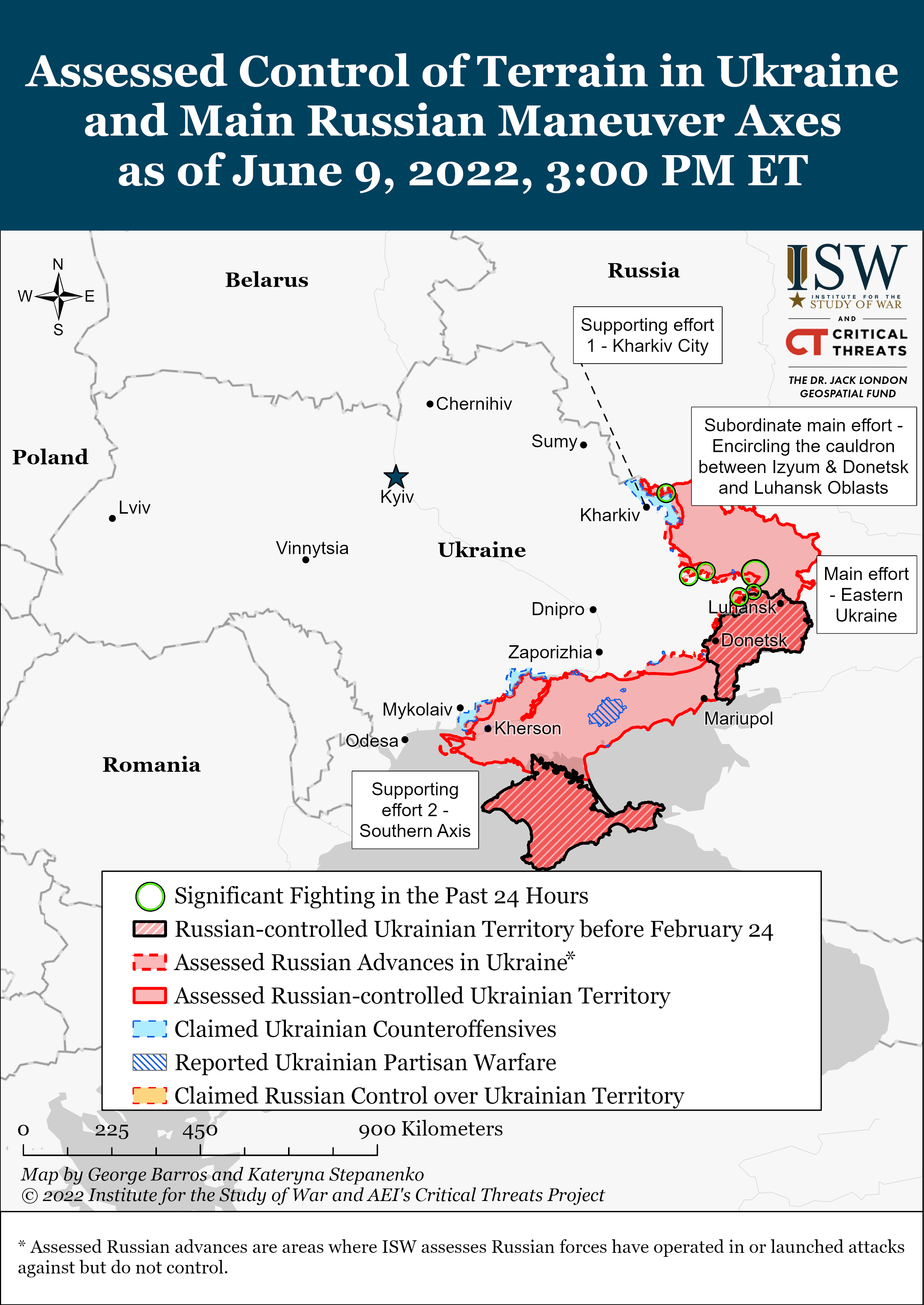 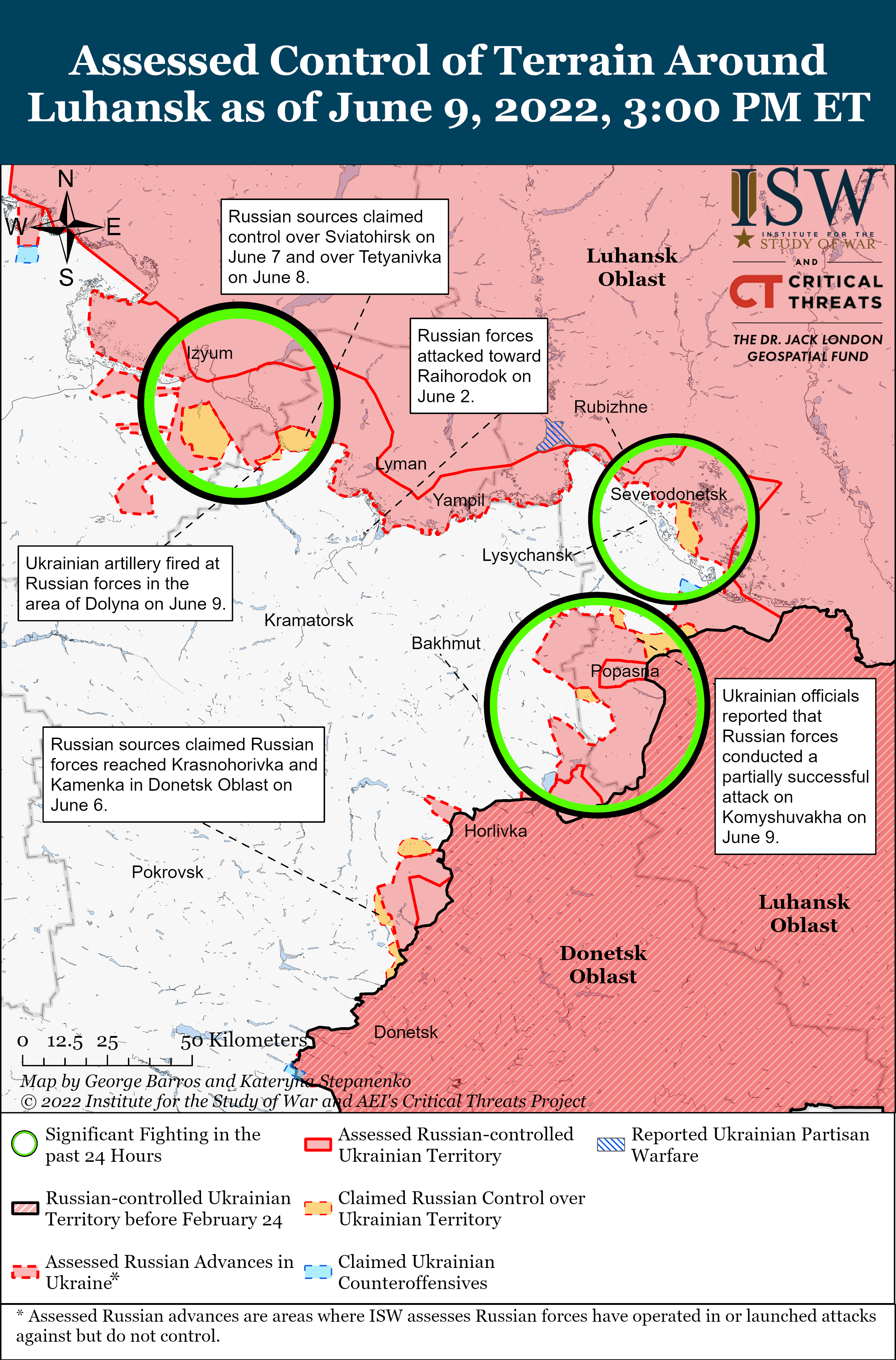 Russian forces continued efforts to advance on Slovyansk from the southeast of Izyum and made marginal territorial gains north of Slovyansk on June 9.[8] Russian forces are likely seeking to leverage their control of the area around Sviatohirsk to move southwards toward Slovyansk, but are unlikely to have seized the settlement as of June 9 due to Ukrainian resistance in the area and Russian milblogger Swodki claimed that Russian forces captured Pryshyb and Tetyanivka (both about 20 km north of Slovyansk) on June 9, though ISW cannot confirm this claim.[9] Russian efforts to move toward Slovyansk are likely hindered by the Siverskyi Donets River, which they will have to successfully cross to the north (around Sviatohirsk-Tetyanivka) and east of Slovyansk (around Raihorodok) in order to push toward the city.[10] 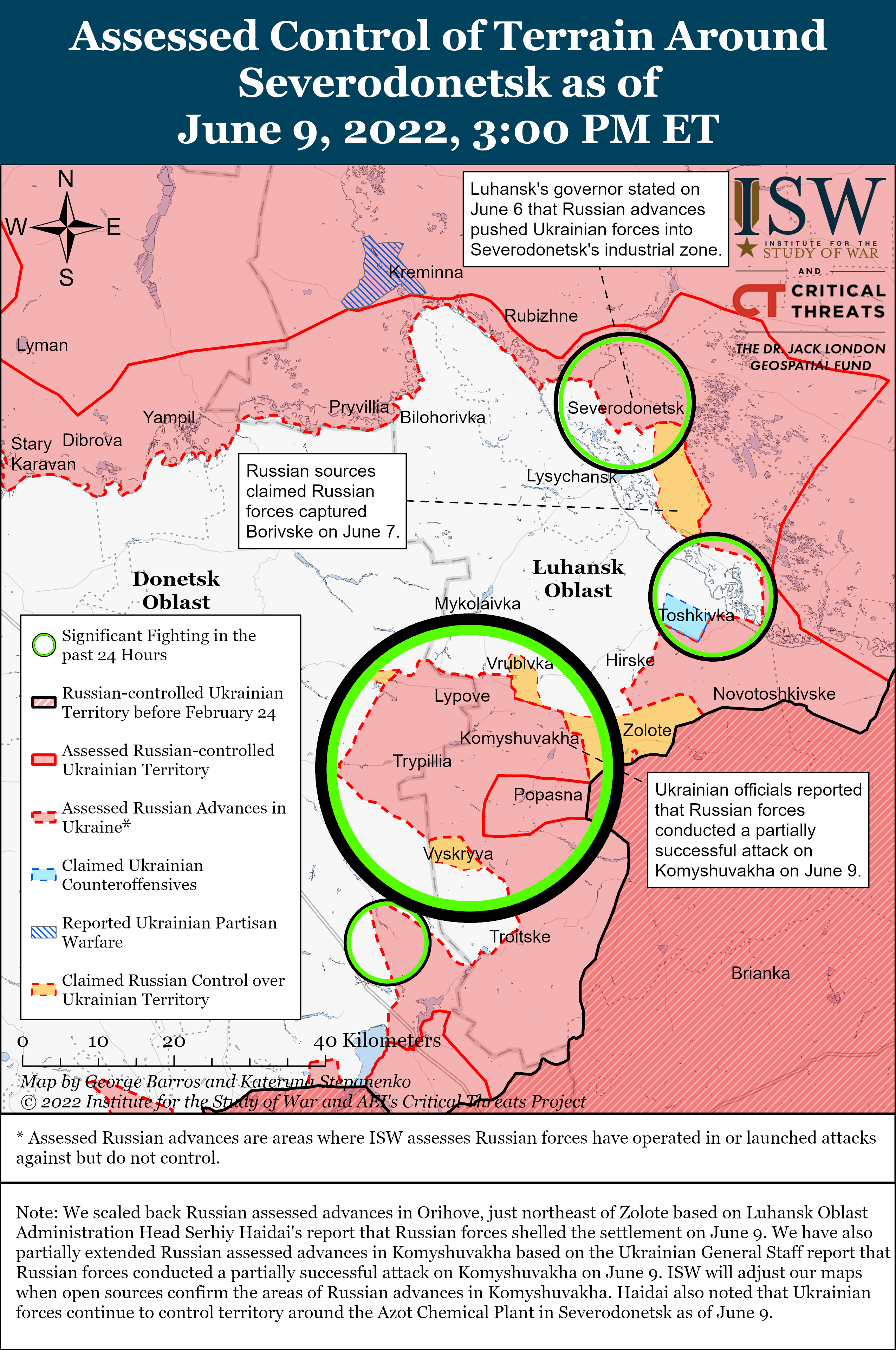 Russian forces continued to defend their occupied frontiers and fire on Ukrainian positions in northern Kharkiv Oblast on June 9.[13] The Ukrainian General Staff reported that Russian forces are focusing on engineering, fortification, and mining to strengthen their defensive lines north of Kharkiv City.[14] Russian Telegram channels additionally claimed that Russian troops re-took control of Ternova and Varvarivka, both settlements northeast of Kharkiv City near the international border.[15] While ISW cannot independently confirm the status of Ternova or Varvarivka, these claims indicate that Russian forces are still engaged in fighting along the frontline in northern Kharkiv Oblast.[16] Certain Russian sources indicated that Ukrainian forces may be conducting limited counterattacks in this area, which is consistent with Russian reports of continued positional battles in this area.[17] 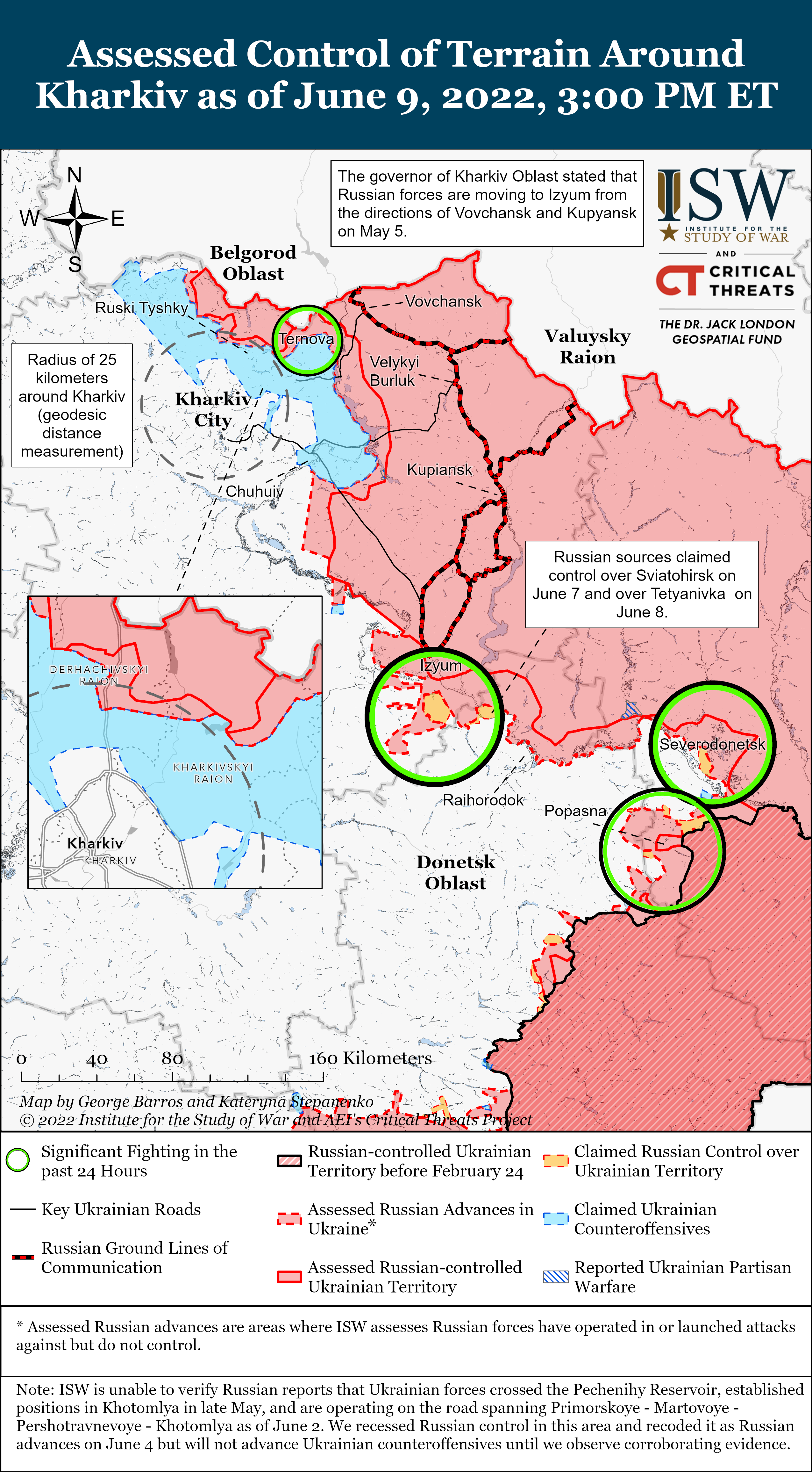 Russian forces focused on strengthening their defensive lines and firing on Ukrainian positions along the Southern Axis on June 9.[18] Deputy Chief of the Main Operations Department of the Ukrainian General Staff Oleksiy Gromov stated that Russian forces are conducting a positional defense in Zaporizhia and Mykolaiv Oblasts (using fortifications and attempting to hold all of their captured terrain).[19] Head of the Zaporizhia Regional State Administration Oleksandr Starukh reported that Russian forces in Zaporizhia have received 80 new tanks over the last month and that Rosgvardia units rotated out of the area and were replaced with forces from the Donetsk People’s Republic (DNR).[20] Russian troop rotations are likely meant to support operations in northeastern Zaporizhia Oblast along the Orikhiv-Huliapole line, where Russian troops have been conducting ground attacks and escalating hostilities to push toward the Zaporizhia-Donetsk Oblast borders.[21] 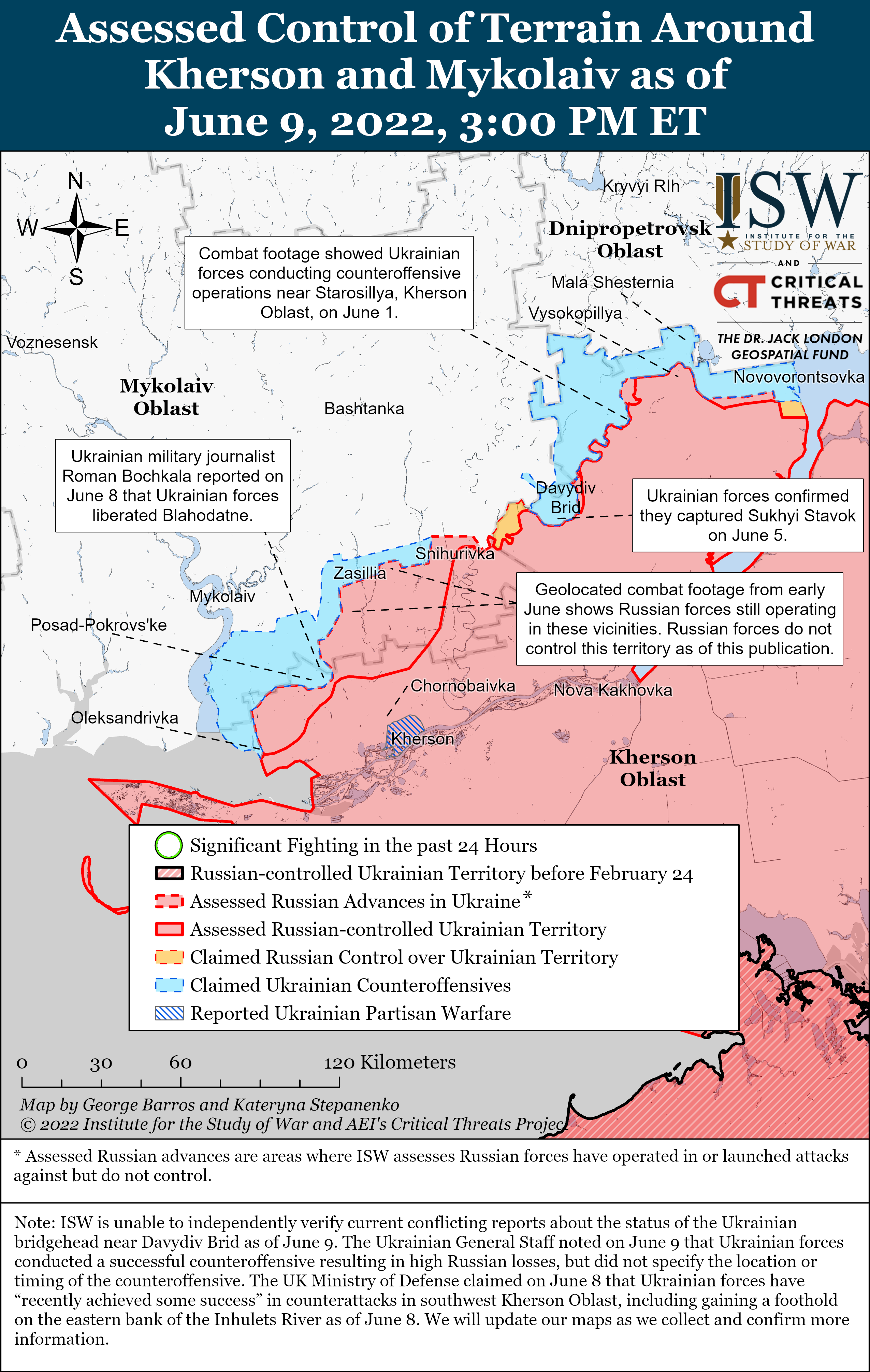 Russian authorities are escalating efforts to consolidate governmental control of the Donetsk and Luhansk People’s Republics (DNR and LNR) and other occupied Ukrainian territories. Independent Russian news source Meduza cited unnamed Kremlin officials and claimed that the Kremlin hopes to unite the DNR, LNR, and occupied Kherson and Zaporizhia into a singular Russian okrug (federal district).[22] Meduza’s statement is consistent with reports that an increasing number of former Russian officials are ascending into senior positions within the governments of the DNR and LNR, including a former governor of Russia’s Kurgan Oblast taking on the role of first deputy chairman of the LNR and a former Russian transportation official ascending to the role of deputy prime minister of the DNR.[23] New Prime Minister of the DNR Vitaly Khotsenko, who was appointed to the position on June 8, announced that his government will synchronize DNR legislation with Russian legislation and Head of the DNR Denis Pushilin announced the DNR has partnered financially with Russia's state-owned Promsvyazbank.[24] Russian authorities likely established a civil-military administration in occupied parts of Kharkiv Oblast, which is analogous to the current Russian-backed military administrations in Zaporizhia and Kherson Oblasts.[25] Such efforts to consolidate governmental control of occupied areas through the direct installation of Russian leadership is a major indicator that the Kremlin is attempting to unify efforts to annex occupied regions directly into the Russian Federation.