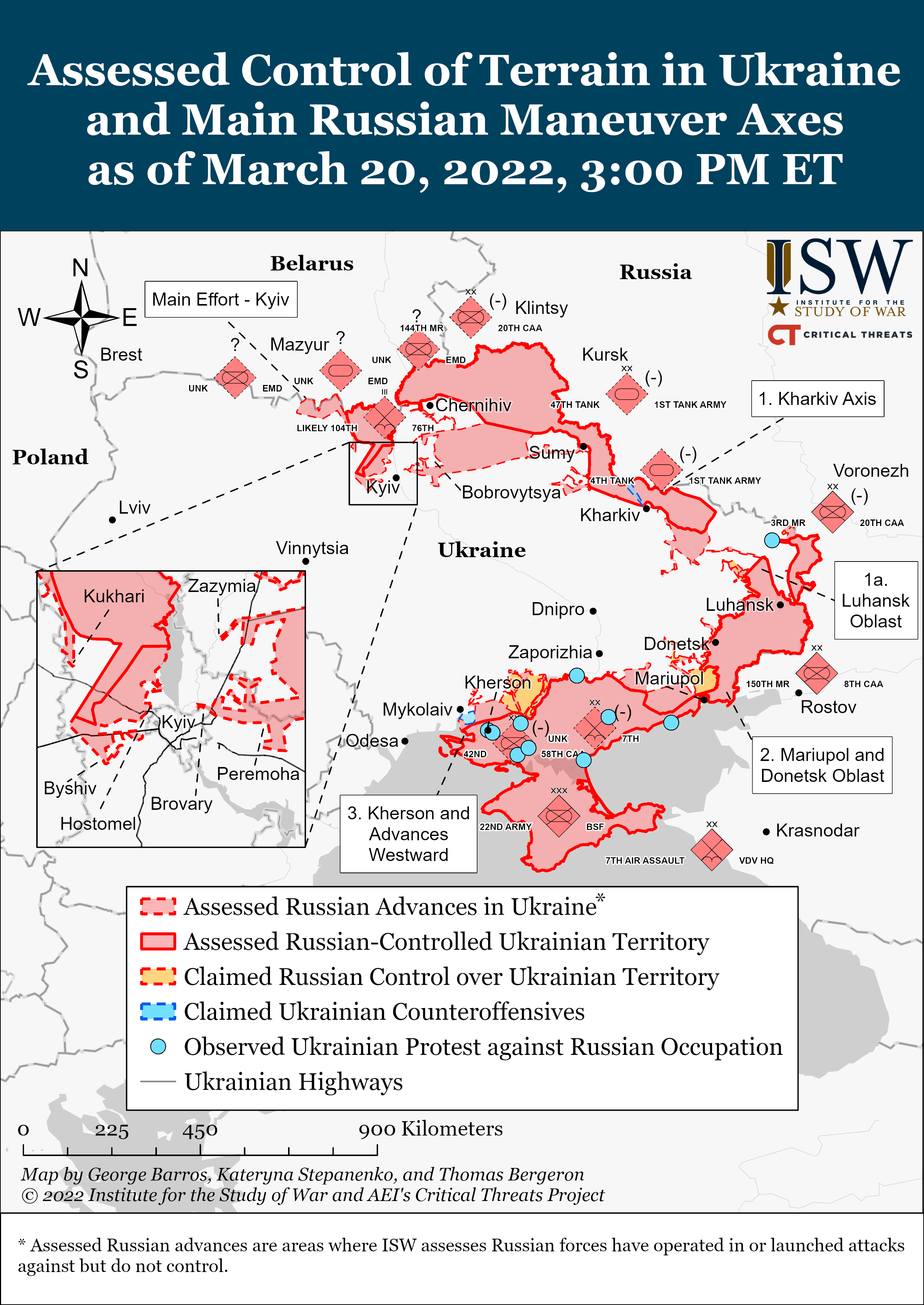 The Ukrainian General Staff reported for the first time that the Kremlin is preparing its population for a “long war” in Ukraine and implementing increasingly draconian mobilization measures.[1] The General Staff reported the Russian military commissariats of the Kuban, Primorsky Krai, Yaroslavl Oblast, and Ural Federal Districts are conducting covert mobilization measures but are facing widespread resistance. The General Staff reported the Russian PMC Wagner Group will facilitate the transport of Libyan fighters from LNA leader Khalifa Haftar’s forces to Ukraine. The General Staff reported universities in the DNR and LNR are conscripting students above the age of 18 and that most units in the DNR’s 1st Army Corps are comprised of the “mobilized population,” rather than trained soldiers, and face low morale and equipment shortages. The Ukrainian Military Intelligence Directorate (GUR) additionally reported on March 20 that Russian Defense Minister Sergei Shoigu signed an order to prepare to admit Unarmiya (Russian Youth Army, a Kremlin-run military youth organization) personnel aged 17-18 to fight in Ukraine on March 15.[2] The GUR further reported Colonel General Gennady Zhidko, head of the Russian Military-Political Directorate, is in charge of executing the order. The Ukrainian General Staff reported on March 19 that Russian officials “severely reprimanded” the head of the 652nd unit of Information and Psychological Operations for his “weak efforts” and inability to create a “Kherson People's Republic."[3]

Russian forces face mounting casualties among officers and increasingly frequent desertion and insubordination. The Ukrainian Ministry of Defense reported on March 19 that “some [Russian] naval infantry units” (unspecified which, but likely referring to Eastern Military District units deployed to the fighting around Kyiv) have lost up to 90% of their personnel and cannot generate replacements.[4] The Ukrainian General Staff reported at noon local time on March 20 that Ukrainian forces wounded the commander of the 346th Independent Spetsnaz Brigade and claimed that Ukrainian forces killed the commanders of the 331st VDV Regiment, 247th VDV Regiment, and the 6th Tank Regiment (90th Tank Division, CMD) at unspecified times and locations.[5] The General Staff reported the Russian Black Sea Fleet is replacing 130 insubordinate soldiers in the 810th Naval Infantry Brigade with paratroopers from the 7th Airborne Assault Division – a measure highly likely to cause greater unit cohesion problems.[6] The General Staff additionally reported that Russian forces are increasingly using ”outdated and partially defective equipment” to replace combat losses.[7]

The Ukrainian MoD reported that forced mobilization in the DNR has demoralized Russian proxy forces, with many refusing to fight and accusing Russian leadership of forcing them into combat to find Ukrainian troop positions. The Ukrainian Military Intelligence Directorate (GUR) reported the number of insubordinate Russian personnel who are refusing combat orders is “sharply increasing” in the Kherson and Mykolayiv oblasts on March 20.[8] The Ukrainian General Staff reported the Russian military commandant office in Belgorod City is investigating 10 Russian servicemen of 138th Motor Rifle Brigade who refused to continue fighting in Kharkiv and agitated for other Russian servicemen to abandon their posts.[9]

Ukrainian military intelligence (the GUR) reported on March 20 that another group of mercenaries connected with Yevgeny Prigozhin and the “League”/Wagner Group began arriving in Ukraine on March 20.[10] The GUR claimed this group aims to eliminate Ukraine’s top military and political leadership, including Volodymyr Zelensky, Andriy Yermak, and Denys Shmyhal. The GUR claimed Russia is turning to assassination plans due to the failure of Russian conventional operations. 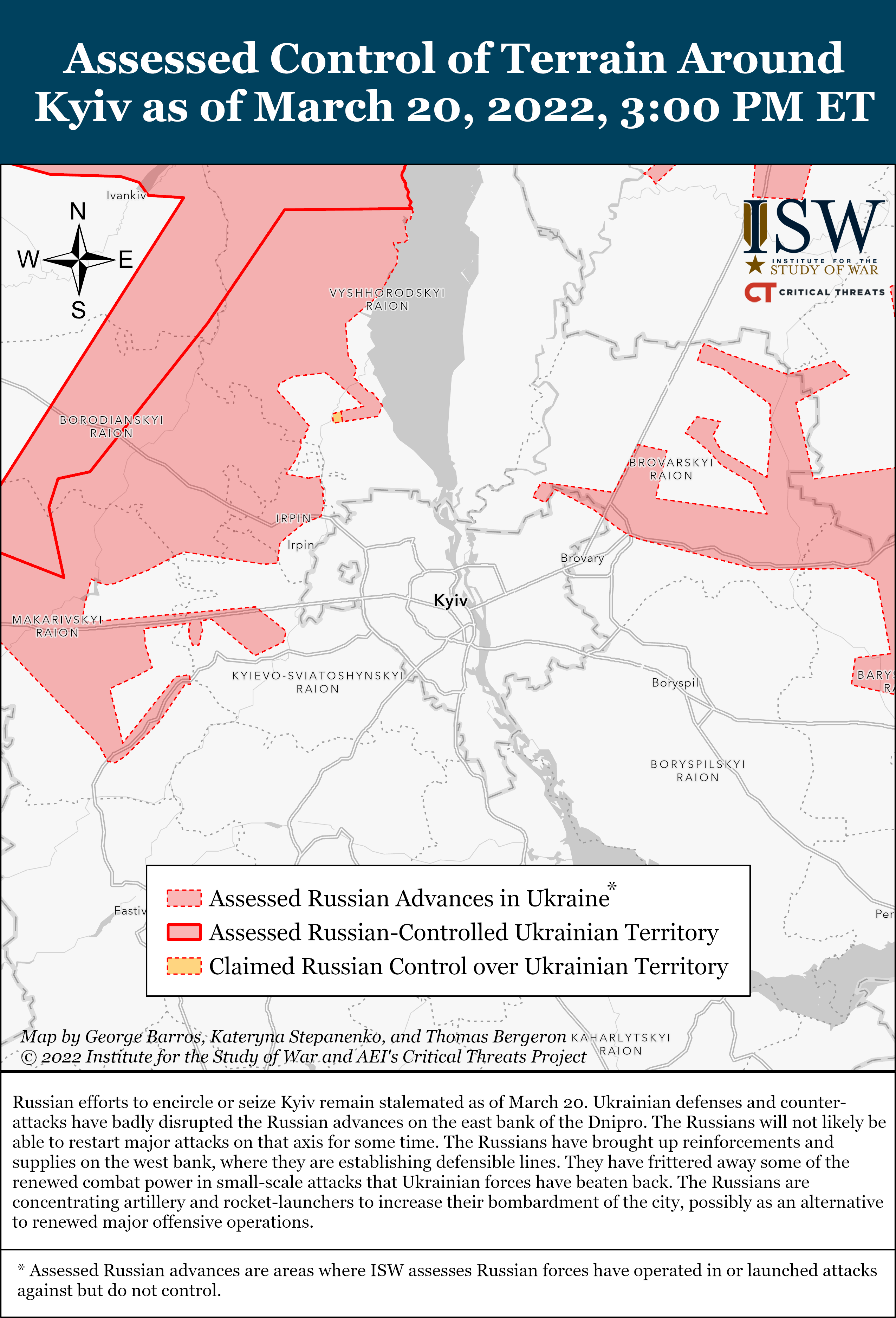 Russian forces did not conduct any offensive operations northwest of Kyiv on March 20.[11] The Ukrainian General Staff stated that Russian forces continued to strengthen defensive positions in previously captured terrain.[12] The General Staff additionally specified Russian forces are deploying engineering support, preparing logistics, and extending their fire control systems.[13] The Ukrainian General staff has not previously mentioned a Russian focus on fire control systems. This Ukrainian assessment supports ISW’s forecast that Russian forces are likely seeking to set conditions for an expanded artillery and missile bombardment of Kyiv by moving into effective artillery range of its center after abandoning plans to encircle or assault the city in the coming weeks.[14]

Russian forces did not conduct any notable activity around Kharkiv in the past 24 hours.[18] The Ukrainian Border Guard reported the detention of two Russian saboteurs in Kharkiv Oblast on March 20.[19] The Ukrainian General Staff reported Russian forces are moving unspecified ”high-powered artillery” in Belgorod Oblast, Russia, as of noon local time on March 20.[20]

Russian and proxy forces made limited territorial gains north of Rubizhne on March 19-20, capturing the village of Varvarivka.[22] The Ukrainian General Staff stated at noon local time on March 20 that Russian forces continued to attempt to capture the settlements of Rubizhne, Severodonetsk, and Popasna but were unable to break through Ukrainian defenses.[23] 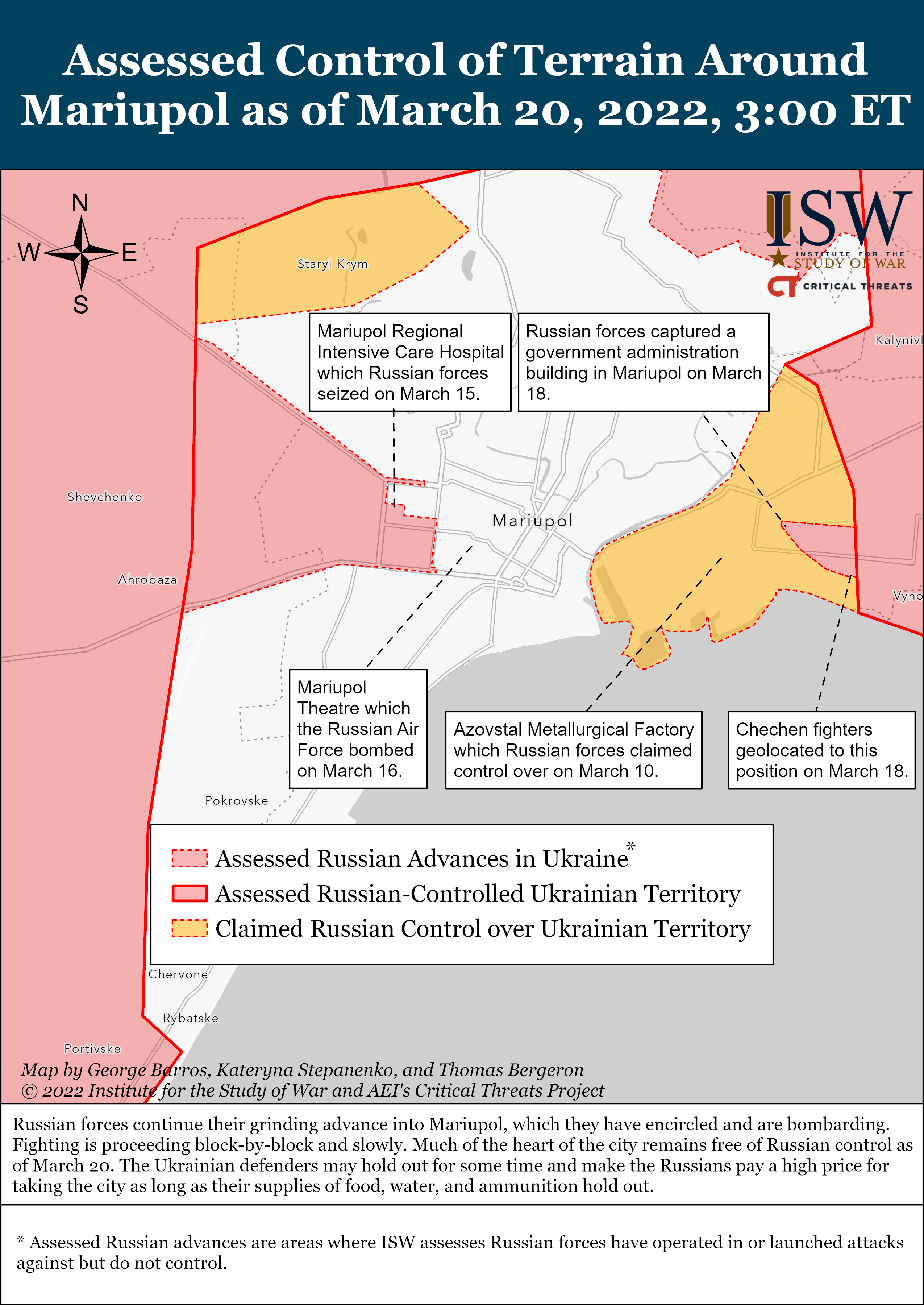 Russian forces continued their slow advance into Mariupol on March 20, though without any major territorial changes.[24] Russian and proxy forces continued to shell the city, including with thermobaric munitions.[25] Russian officials additionally confirmed on March 20 the that Deputy Commander of the Black Sea Fleet for military-political affairs, Captain of the 1st Rank Andrei Paly, was killed in Mariupol on an unspecified date.[26] The Russian Ministry of Defense claimed DNR forces advanced 3km towards Verkhn'otorets'ke, north of Mariupol, on March 19.[27]

The Ukrainian General Staff reported at midnight local time on March 19 that Ukrainian forces restored an unspecified “front line of defense along some borders” in the “southern direction” - likely referring to continuing Ukrainian counterattacks around Mykolayiv.[28] The General Staff further stated Russian forces did not conduct any offensive operations in the southern direction on March 20 and prioritized restoring combat effectiveness.[29] The Russian Ministry of Defense claimed that Black Sea Fleet warships struck Ukrainian workshops and storage facilities in Mykolaiv with Kalibr missiles on March 20, though ISW cannot independently verify this claim.[30]