Russian forces continued their unsuccessful efforts to move into positions from which to attack or encircle Kyiv, claims by First Deputy Chief of the Russian General Staff Sergei Rudskoi on March 25 notwithstanding. The Russian military continues to concentrate replacements and reinforcements in Belarus and Russia north of Kyiv, to fight for positions on Kyiv’s outskirts, and to attempt to complete the encirclement and reduction of Chernihiv.  Russian activities around Kyiv show no change in the Russian high command’s prioritization of the fight around Ukraine’s capital, which continues to occupy the largest single concentration of Russian ground forces in Ukraine.  The Russians have not claimed to redeploy forces from Kyiv or any other part of Ukraine to concentrate on fighting in Donbas, and we have observed numerous indicators that they have not done so.  The increasingly static nature of the fighting around Kyiv reflects the incapacity of Russian forces rather than any shift in Russian objectives or efforts at this time.

Russian forces will likely bisect the city of Mariupol in the coming days as they claim and will likely gain control of the city in the relatively near future.  Fighting in Mariupol continues to be fierce, however, and Russian forces continue to suffer significant losses.  The amount of combat power the Russians will be able to harvest from Mariupol once they gain control of the city will determine whether the city’s fall will allow the Russians to launch renewed large-scale offensive operations in Ukraine’s east.  It remains unclear how badly damaged Russian units fighting for Mariupol are—or how much more damage they will incur in completing the capture of the city—but high-profile casualties in elite and conventional Russian combat units such as the 810th Naval Infantry Brigade and the 150th Motorized Rifle Division, both of which have lost commanders in the past few weeks, suggest that losses in such units are high.[1] 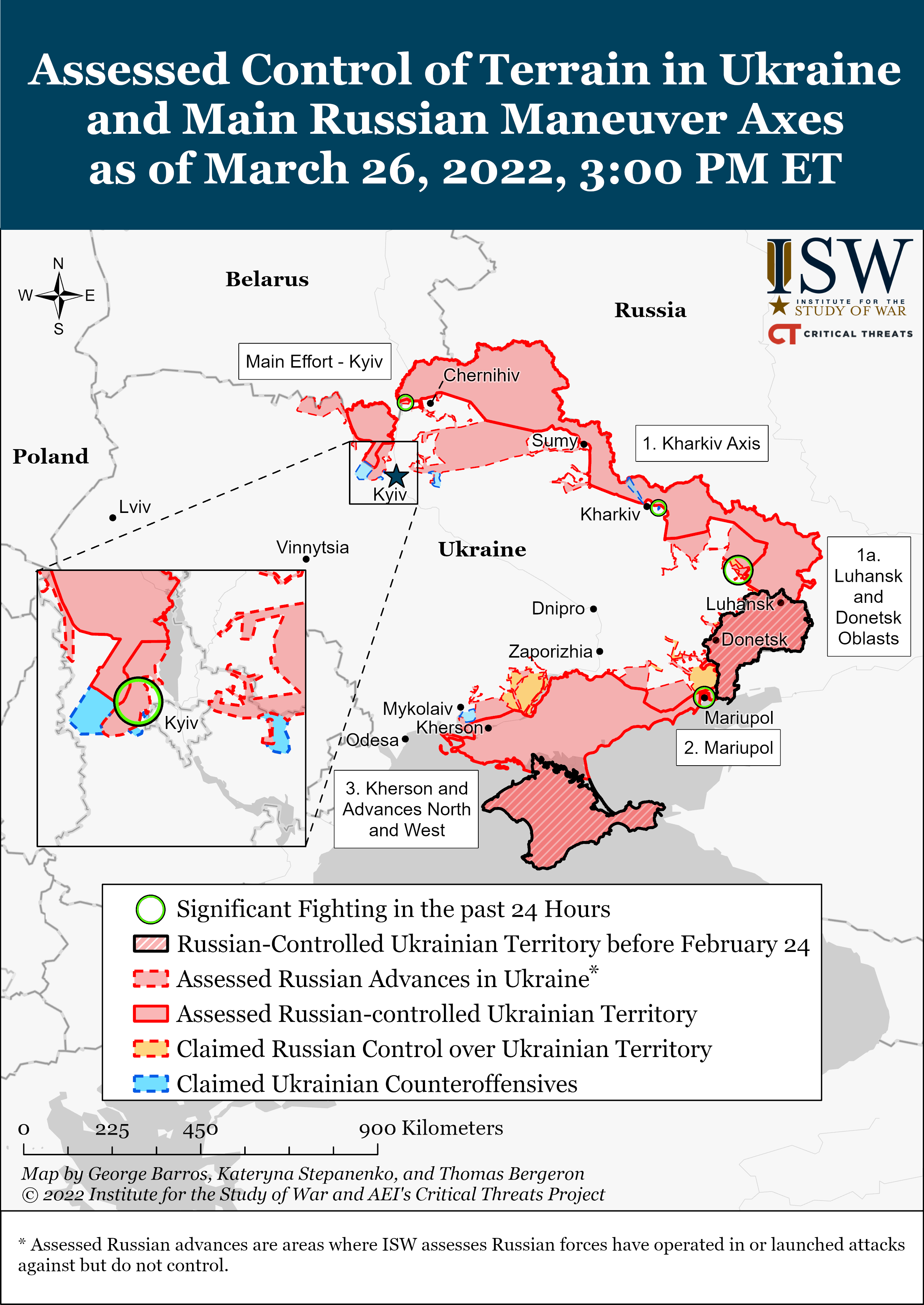 The Ukrainian General Staff reports that the Russian military is continuing efforts to replace personnel and equipment losses but struggling to do so.  The General Staff claimed on March 25 that Russia has established a base in Russia’s Bryansk Oblast to repair and rehabilitate equipment pulled from strategic reserves.[2]  The General Staff asserted that much of Russia’s reserve equipment is unusable or in very poor states of repair, with essential gear—including engines—stripped out of many vehicles.  The General Staff added on March 26 that the Russians are attempting to refurbish old T-72 tanks as part of this effort.[3]  The General Staff also claimed that the Russian military is lowering its standards for conscripts and recruits and has been forced to use a higher proportion of conscripts in combat as it has suffered losses among its professional soldiers.[4]  We have no independent confirmation of these reports, but they are consistent with observed patterns of Russian operations and losses in Ukraine and with ISW’s earlier assessment of the state of the Russian personnel reserve system.[5]

Morale problems within the Russian military are becoming more serious and apparent.  Reports that the soldiers of a Russian unit killed their brigade commander by running him over with a tank and, more recently, that the commander of the 13th Guards Tank Regiment of the 4th Guards Tank Division (1st Guards Tank Army) committed suicide likely indicate a general breakdown of morale even among first tier Russian combat units.[6] 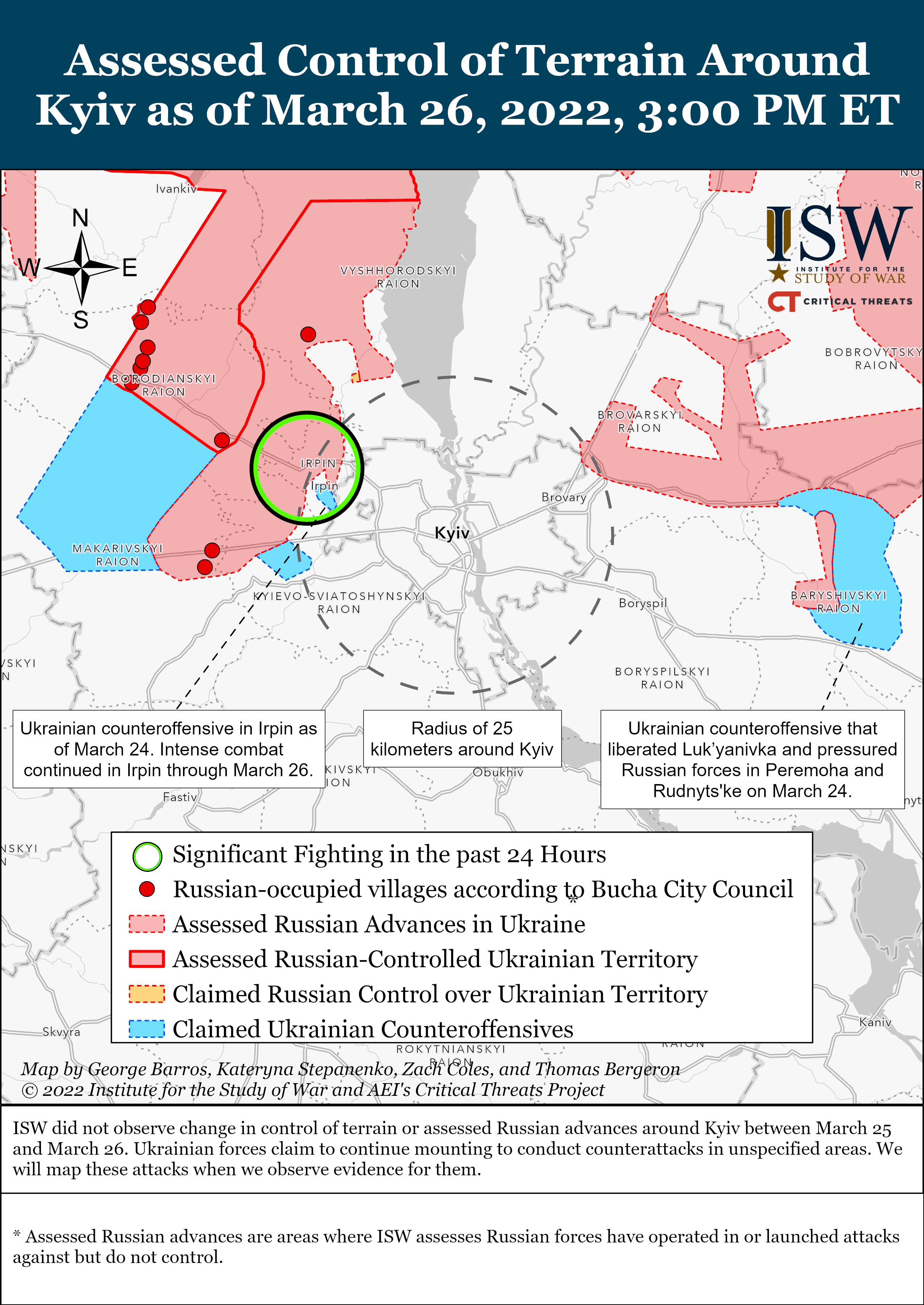 Russian forces pushed into the town of Slavutych, about 35 kilometers west of Chernihiv, on March 26.[11]  Residents of the town protested the Russian incursion, prompting Russian soldiers to fire into the air to disperse them.[12]  Russian forces reportedly demanded that Ukraine withdraw Ukrainian police from Slavutych.[13]  Russian operations in the area of Slavutych are likely intended to tighten the encirclement of Chernihiv and presumably force the city to surrender.  The fall of Slavutych is unlikely to change the overall operational situation around Kyiv materially.

Ukrainian forces conducted a successful counterattack to regain control of the towns of Mala Rohan and Vilkhivka, roughly 20 kilometers east of Kharkiv city on March 25.[14]  Russian forces continued shelling Kharkiv City but otherwise refrained from conducting significant operations in this area in the past 24 hours.[15]

Russian forces launched a limited ground offensive operation in an apparent effort to capture the towns of Popasna and Rubizhne on March 26, but without success according to the Ukrainian General Staff.[16]  Russian forces regularly attack villages in this area with helicopter gunships according to social media sources.[17]

Russian media claimed that Russian forces in Mariupol will soon “divide” the city, presumably along the east-west axis on which they have been attacking.[18]  The Donetsk People’s Republic claimed that it opened its own police departments in occupied areas of Mariupol.[19]  The Ukrainian General Staff noted the fighting in Mariupol but did not comment on the success of the most recent Russian offensive operations.[20]  We have no independent verification of Russian claims, but they appear consistent with observed indicators from the battlefield and recent trends in the fighting. 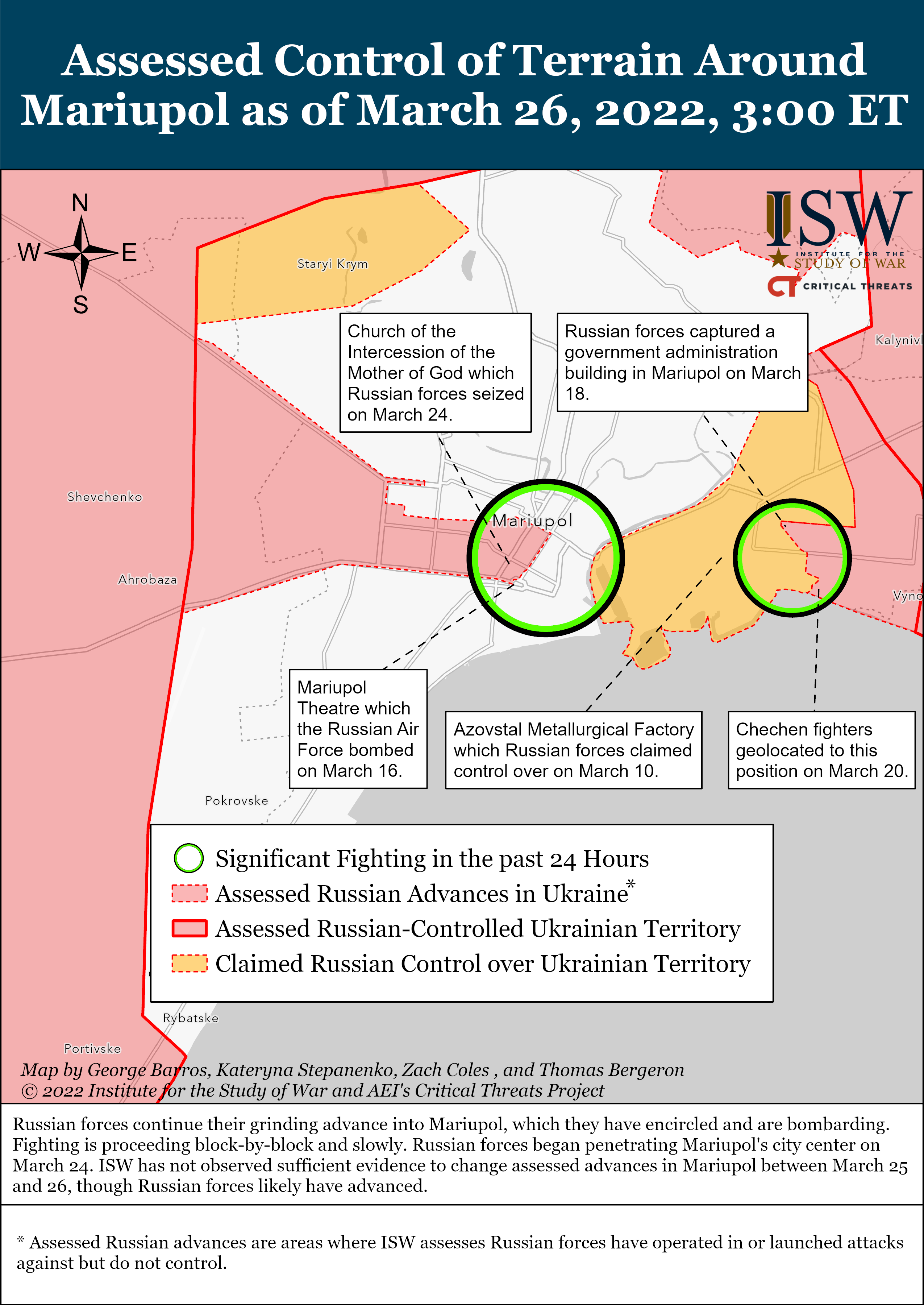 Russian forces did not conduct any offensive operations in the southern direction in the past 24 hours.  The Ukrainian General Staff claimed on March 26 that the Russians have deployed all Rosgvardia units based in Crimea and/or located in Kherson, Donetsk, and Zaporizhiya Oblasts to suppress Ukrainian unrest in Kherson, Henichesk, Berdyansk, and some districts of Mariupol.[21]  The General Staff further reported that the Russians are attempting to establish strict administrative and police regimes in these areas on March 26.[22]  These reports appear to confirm statements by an unnamed US Department of Defense official that Kherson is no longer fully under Russian control.[23]  There is no front line anywhere near Kherson City, so the assessment that the Russians no longer control it fully almost certainly rests on the existence of local Ukrainian partisan activity.

Russian forces will likely capture Mariupol or force the city to capitulate within the coming weeks and have entered the city center;

Russian forces around Kyiv will likely continue efforts to hold against Ukrainian counter-attacks while also attempting to restart offensive operations on a limited scale;

Russian and proxy troops will continue efforts to seize the full territory of Donetsk and Luhansk Oblasts, but will not likely make rapid progress in doing so.