The Ukrainian destruction of significant elements of a Russian motorized rifle brigade that tried to cross a pontoon bridge over the Siverskyi Donets River on May 11 has shocked prominent Russian milbloggers. Those bloggers have begun commenting on the incompetence of the Russian military to their hundreds of thousands of followers. The attempted river crossing showed a stunning lack of tactical sense as satellite images show (destroyed) Russian vehicles tightly bunched up at both ends of the (destroyed) bridge, clearly allowing Ukrainian artillerymen to kill hundreds and destroy scores of vehicles with concentrated strikes. The milbloggers who have hitherto been cheering on the Russian military criticized Russian armed forces leadership for failing to learn from experience in the war. They also expressed the concern that the constant pushing of Russia’s propaganda lines was making it hard for them to understand what was actually going on.

The effects of this change in tone and discourse by these milbloggers are uncertain but could be potent. People living under tightly censored regimes often trust individuals who seem to be independent of but generally aligned with the government more than the government line (even more than do citizens of democratic societies). The commentary by these widely read milbloggers may fuel burgeoning doubts in Russia about Russia’s prospects in this war and the competence of Russia’s military leaders (at least).

The destruction of the motorized rifle elements may also severely disrupt Russian efforts to isolate Severodonetsk and Lysychansk from the north. Russian troops made no attempts to advance in that area in the last 24 hours.

Russian forces continued operations to set conditions for the Battle of Severodonetsk from the south, however, advancing on the town of Zolote, roughly 30 km south of Severodonetsk. Russian troops likely seek to secure the highway north from Zolote to Severodonetsk for their advance, but they may also seek to cut the last highway linking Severodonetsk with the rest of Ukraine via Bakhmut. They could try to strike northwest across the country from their current positions to cut that highway closer to Lysychansk and Severodonetsk. The Russians are extremely unlikely to be able to take Bakhmut but they may be able to cut or render unusable the highway from Bakhmut to Severodonetsk if they can advance far enough along either of these possible routes.

Ukrainian forces will likely conduct counteroffensive operations to dislodge the Russians from around Izyum, according to Ukrainian officials. We have previously noted that Russian artillery fire directed to the west from around Izyum was more likely intended to disrupt such a counter-offensive than to set conditions for a Russian attack.

Russian forces continued their withdrawal from Kharkiv Oblast but will likely seek to hold a line east of Vovchansk to secure the ground line of communication (GLOC) running from Belgorod through Vovchansk to Izyum. The terrain in this area generally favors the defender, and the Russians have other GLOCs with which to supply Izyum, so the Ukrainians may not try to advance much farther to the east at this time.

Ukrainian defenders continued to fight in the Azovstal Plant in Mariupol despite horrific conditions and continued Russian attacks. The Ukrainian defense of Azovstal is still tying down Russian combat forces and inflicting casualties. 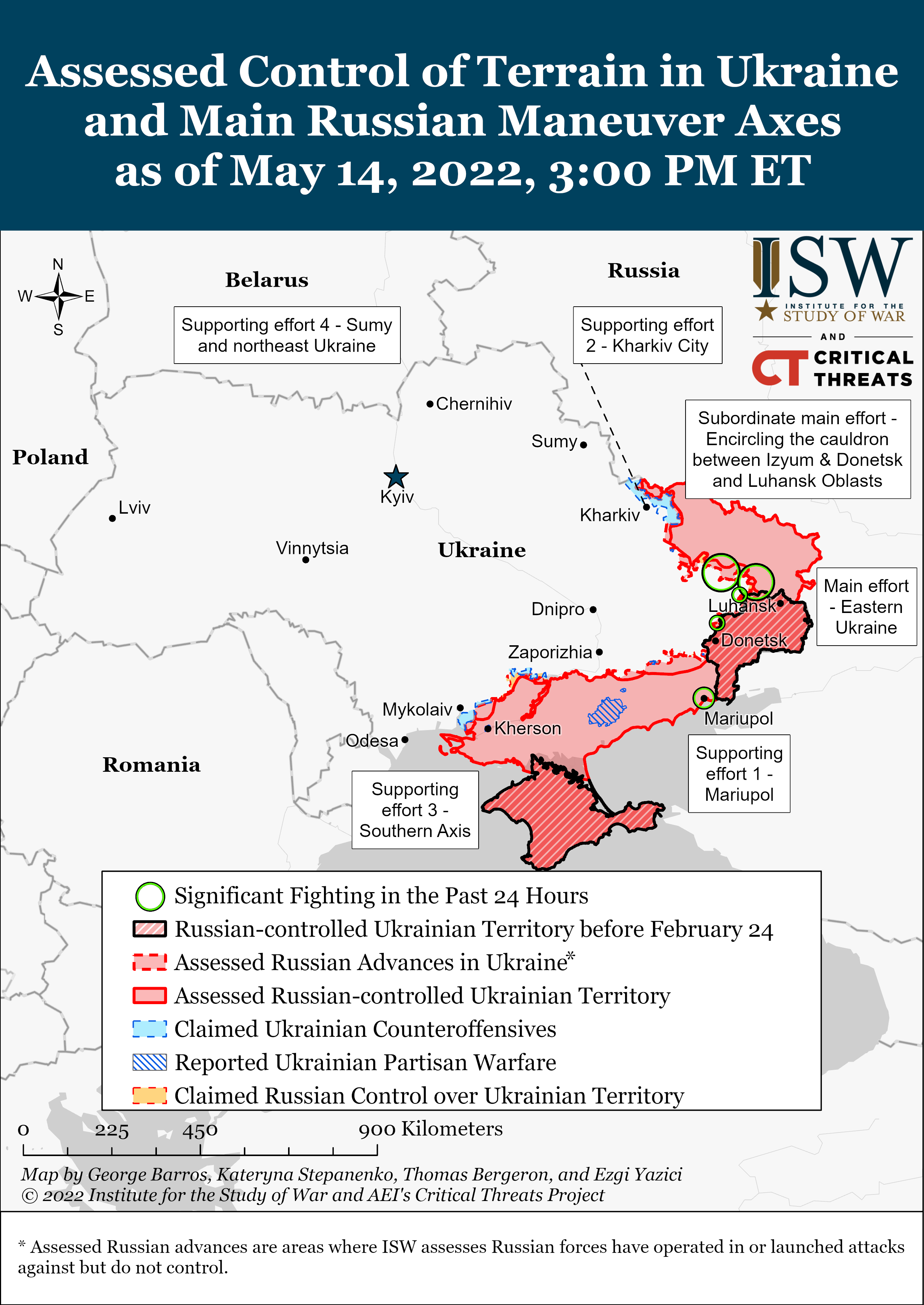 Russian forces did not conduct active offensive operations around Izyum, continuing to shell and reconnoiter Ukrainian positions south and west of the settlement.[1] Kharkiv Oblast Administration Head Oleg Synegubov announced on May 14 that Ukrainian forces launched a counteroffensive likely northwest of Izyum and forced Russian forced to retreat in some unspecified areas.[2] Future Ukrainian counteroffensives from Kharkiv City or western directions may force Russians to halt their advances to Slovyansk to defend Russian ground lines of communication (GLOCs).

Russian forces made significant tactical mistakes during the attempted large-scale crossing of the Siverskyi Donets River from Kreminna. The Russian command reportedly sent 550 servicemen of the 74th Motorized Rifle Brigade of the 41st Combined Arms Army to cross the Siverskyi Donets River in order to encircle Ukrainian forces near Rubizhne from the northwest.[3] Ukrainian artillery destroyed the Russian pontoon bridges and tightly-concentrated Russian troops and equipment around them on May 11, which reportedly resulted in 485 casualties and damages to over 80 pieces of equipment.[4] The 74th Motorized Rifle Brigade had previously attempted a river crossing (over the Desna River in Chernihiv Oblast on March 8) without suffering such setbacks.[5] The unit’s command and staff may have failed to recognize the dangers that Ukraine’s improving artillery capabilities posed two months later, or may simply have been incompetent or unable to control their troops.

Prominent pro-Russian Telegram channels (with approximately 300 thousand followers) largely criticized Russian General Staff for failing to learn from previous combat mistakes and expressed concern that censorship and self-censorship was depriving them of situational awareness.[6] Other pro-Russian Telegram channels noted the slow pace of Russian offensive operations in northern Kharkiv Oblast, blaming it in part on ineffective aerial reconnaissance and the negative effects of bad morale within the Russian military.[7] Some Telegram channels reported receiving criticism for “misrepresenting” the performance of the Russian military.[8] The Russian Defense Ministry posted a video that it claimed showed that Russian forces in turn destroyed Ukrainian pontoon crossings on May 14, although we have no independent confirmation of these claims.[9]

Russian forces attempted to advance east of Popasna, likely continuing to set conditions for the Battle of Severodonetsk. Luhansk Oblast Administration Head Serhiy Haidai reported that Russian forces attempted to secure access to the T1303 Lysychansk-bound highway east of Popasna on May 13.[10] Haidai noted that Ukrainian artillery continues to repel Russian advances on Severodonetsk itself from the north but noted that Russians had accumulated a large amount of equipment in the area to break Ukrainian resistance.[11]

Russian forces continued to conduct assaults near Avdiivka in an effort to break through Ukrainian defenses in the region. The Ukrainian General Staff reported that Russian forces were partially successful during an assault in the vicinity of Avdiivka.[12] The Donetsk People’s Republic also claimed that Russian infantry made farther advances using transmitted coordinates of Ukrainian positions in the area of Avdiivka.[13] Avdiivka social media users reported that Russians did not enter Avdiivka, but attempted to advance from the north on May 13 and continued mortar shelling.[14] ISW does not have sufficient information available in the open-source to confirm or refute these claims, but Ukrainian forces are likely maintaining their fortifications in the town itself. 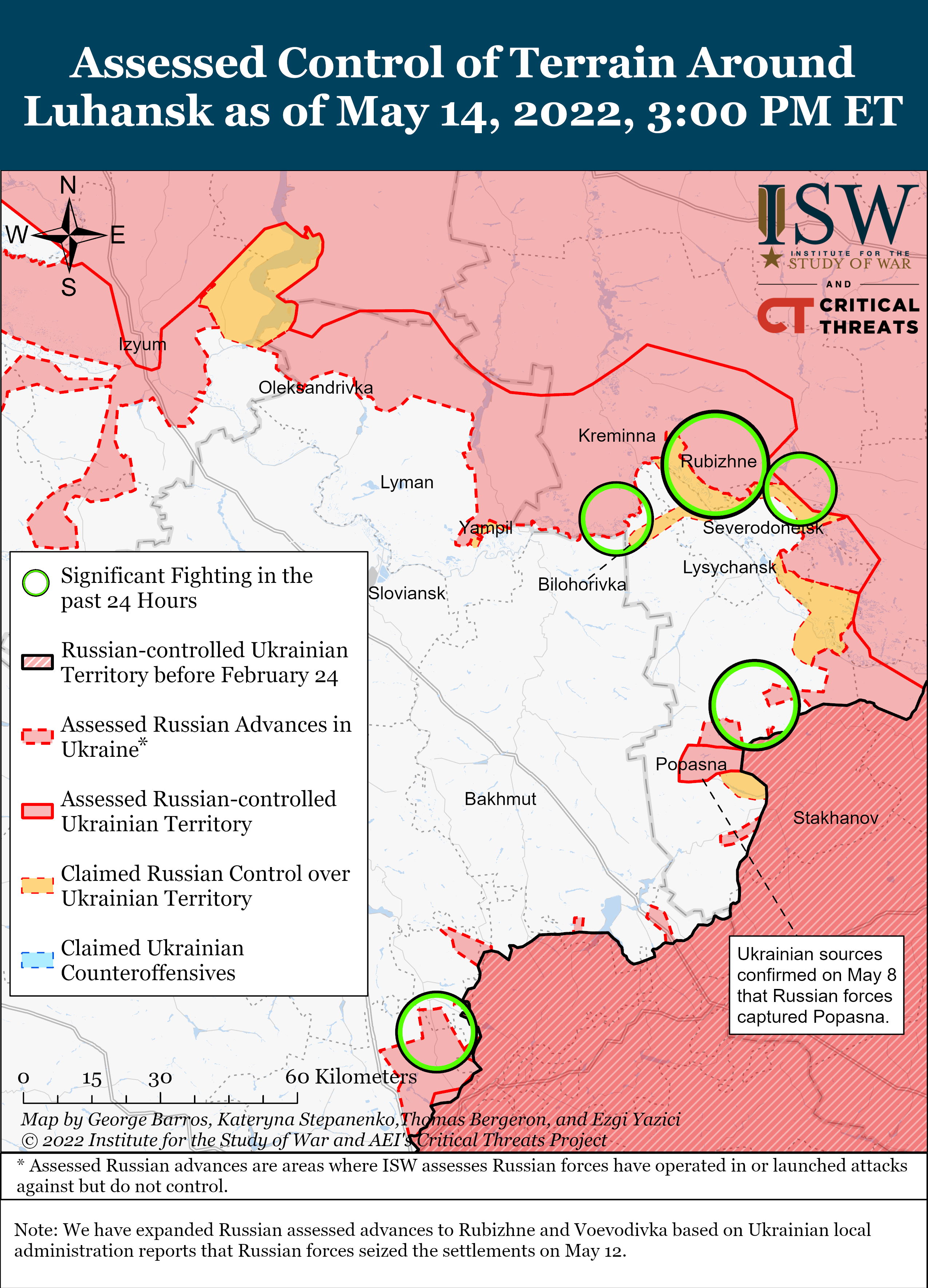 Russian forces conducted ground, air, and artillery assaults on the Azovstal Steel Plant on May 14.[15] Ukraine’s Azov regiment said that Russian forces used heavy artillery, tanks, and infantry to launch an assault on Azovstal but that Ukrainian forces continued to hold defensive positions at the plant and its outskirts.[16] A Donetsk Oblast Police Representative reported that there are over 600 wounded Ukrainian servicemen surviving in unsanitary conditions at the Azovstal.[17] Ukrainian officials are attempting to negotiate the evacuation of 60 medical professionals and heavily wounded servicemen as of May 14.[18] 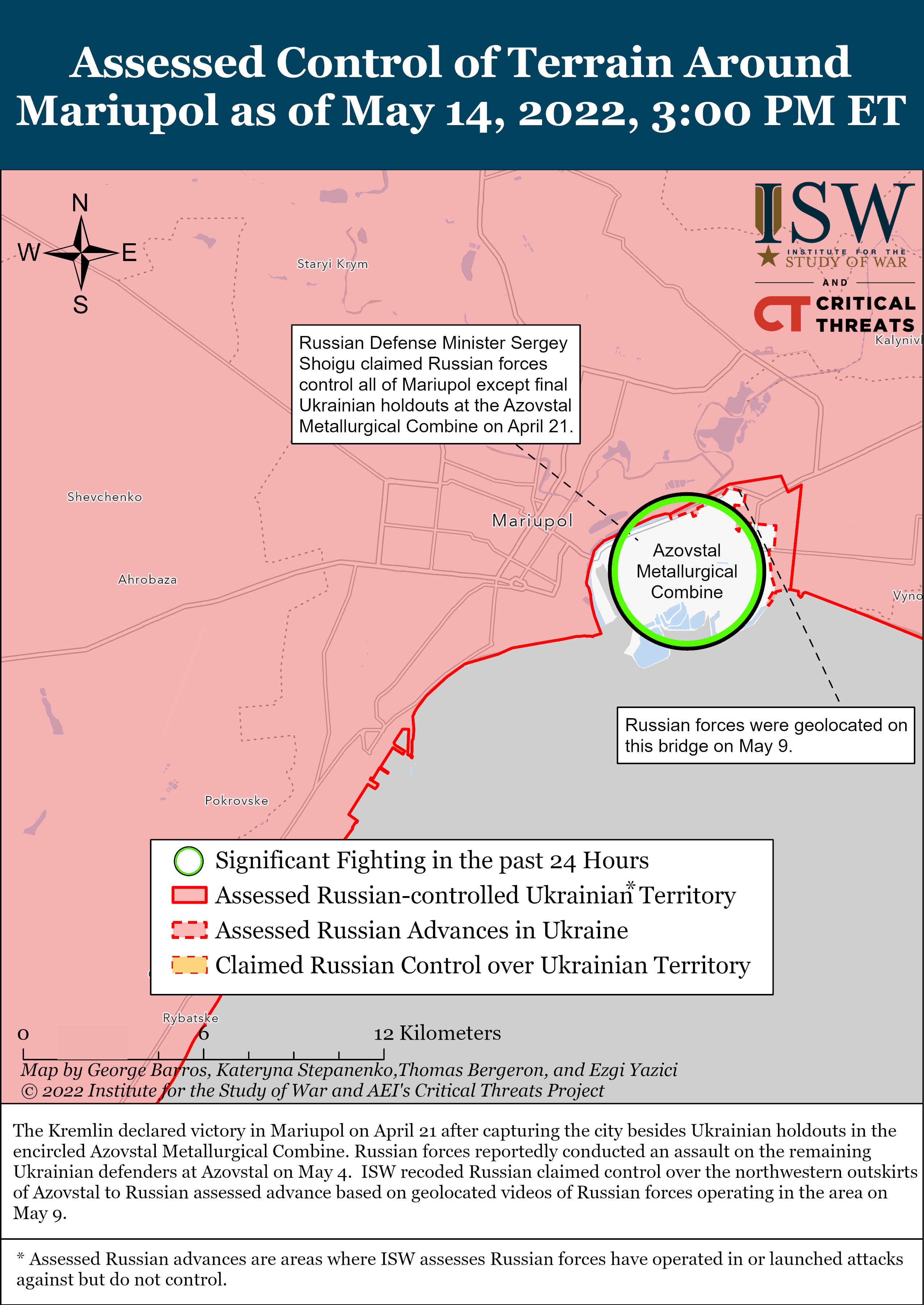 Russian forces continued to withdraw from the region north of Kharkiv City on May 14. Russian forces will likely focus on defending their ground lines of communication (GLOCs) to Izyum that pass through Vovchansk, roughly 60 km northeast of Kharkiv City. Kharkiv Oblast Administration Head Oleg Synegubov reported that Russian forces did not shell Kharkiv City but instead fired at Ukrainian positions in northeastern Kharkiv Oblast.[21] Ukrainian forces likely pushed Russian forces closer to the border and claimed to have liberated an unnamed settlement located “only hundreds of meters away” from the Russian border.[22] Ukrainian social media videos show Ukrainian units operating in liberated settlements to target remaining Russian servicemen and clear out mines.[23] 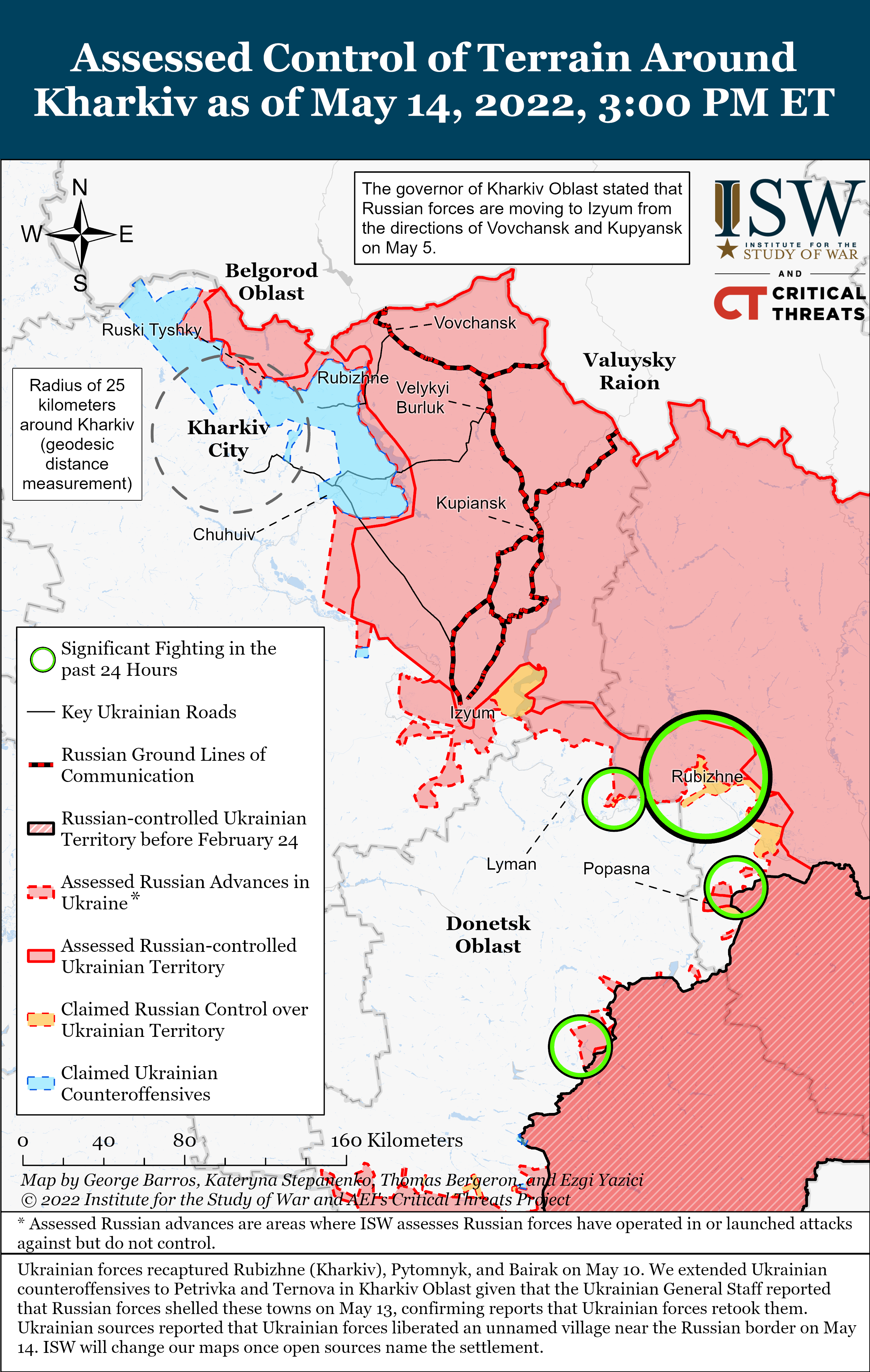 Russian forces did not conduct offensive operations along the southern axis but continued artillery fire on Ukrainian positions throughout the region.[24] Zaporizhia Oblast Military Administration reported that Russian forces have dug trenches in northwestern Zaporizhia Oblast approximately 20 kilometers from the highway to Zaporizhia City.[25] Russian forces may be preparing for further offensive operations on Zaporizhia City, which is unlikely, or could be further fortifying access to Kherson Oblast from the north and east. Ukrainian forces reportedly destroyed a Russian field depot near Polohy, about 45 kilometers from the Donetsk Oblast border.[26]

Russian occupation authorities continue to face administrative problems that prevent Russia from establishing full control over occupied territories. The Ukrainian Military Intelligence Directorate (GUR) reported that the Kremlin is planning a referendum in Kherson Oblast on September 11, adding that Russian forces will attempt to recruit local collaborators throughout the summer.[27] The wildly varying reports of possible dates for a referendum in Kherson (and denials that there will be any annexation) suggest considerable confusion within the Russian leadership at various levels about Russia’s prospects for securing the area and, possibly, the best way forward. The GUR also reported that Russian forces are conducting covert mobilization in Crimea and are requiring residents to donate blood.[28]

Russian forces began to strengthen air defense systems at Snake Island located off the Romanian coast in response to Ukrainian strikes on the island.[29] The GUR reported that recent Ukrainian attacks wounded or killed 32 servicemen on Snake Island.[30] Russian vessels may have been unable to evacuate Russian servicemen in a timely fashion due to the Ukrainian missile and drone threat, contributing to the high casualties.[31] Two Russian vessels reportedly left Snake Island on May 14.[32] 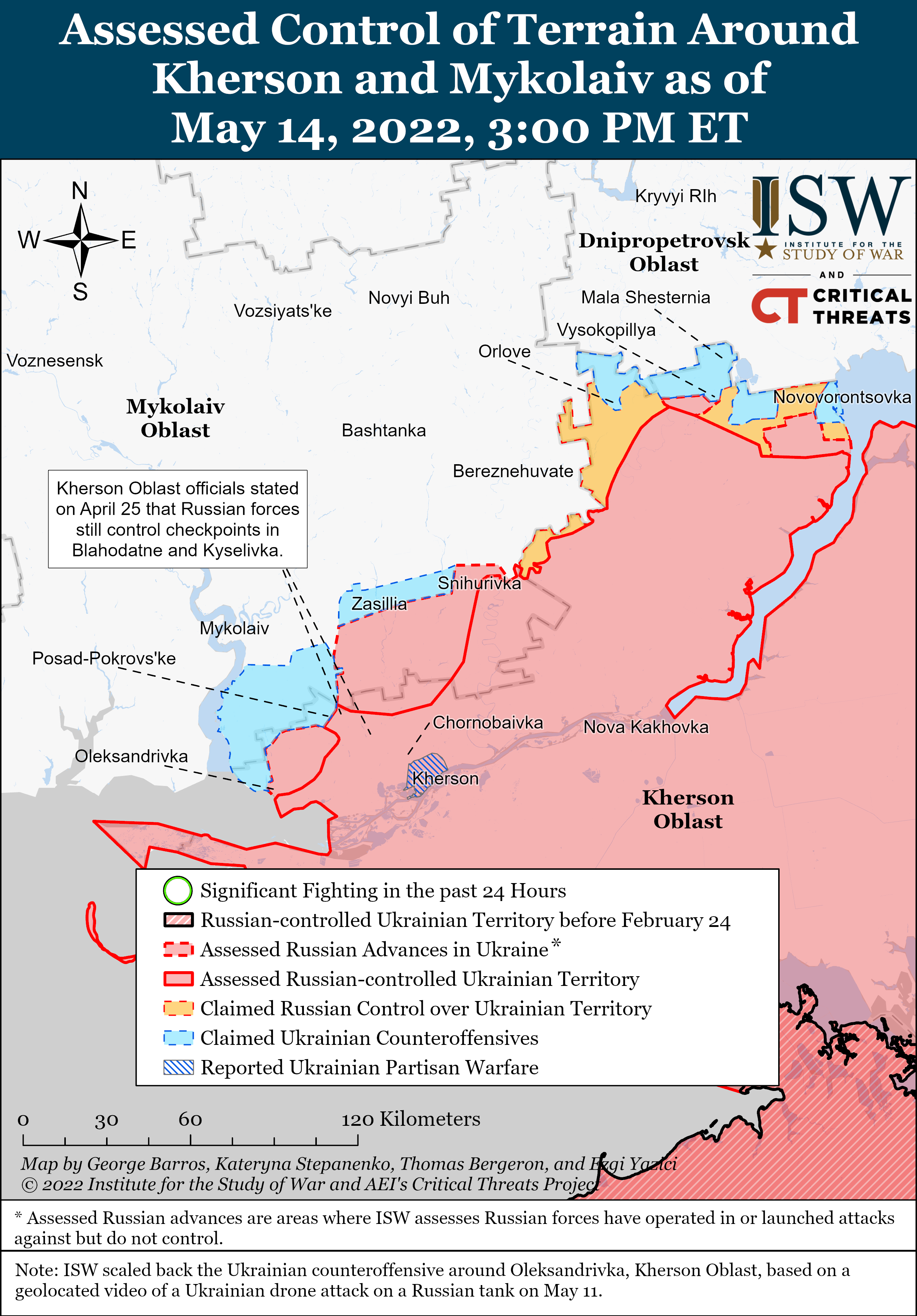 The Ukrainian General Staff also noted that Transnistrian forces returned to normal operations while Russian forces remained on high alert, which could indicate disagreements between the self-declared Transnistrian government and Russia over Transnistria’s involvement in the war.[33] 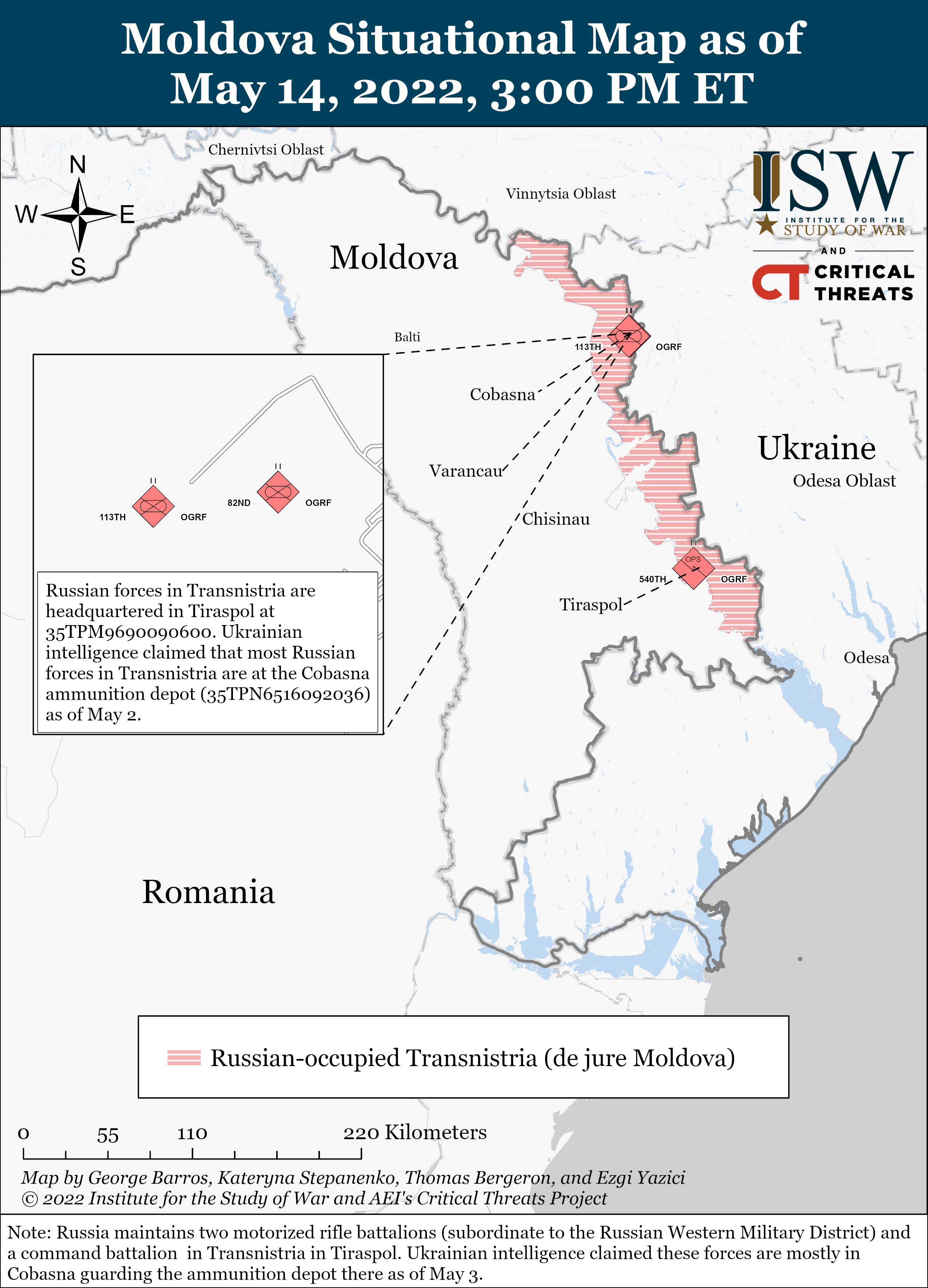