Russian forces intensified efforts to encircle and capture Severodonetsk on May 21 and will likely continue to do so in the coming days as efforts on other axes of advance, including Izyum, remain largely stalled. Russian troops in Luhansk Oblast will likely move to capitalize on recent gains made in the Rubizhne-Severodonetsk-Luhansk-Popasna arc to encircle and besiege Severodonetsk—the final Ukrainian strongpoint in Luhansk Oblast. Russian milbloggers are hypothesizing on the success of Russian tactics in the area and have dubbed it the Battle of Severodonetsk—emphasizing that this is the preliminary line of effort in the Donbas theatre. 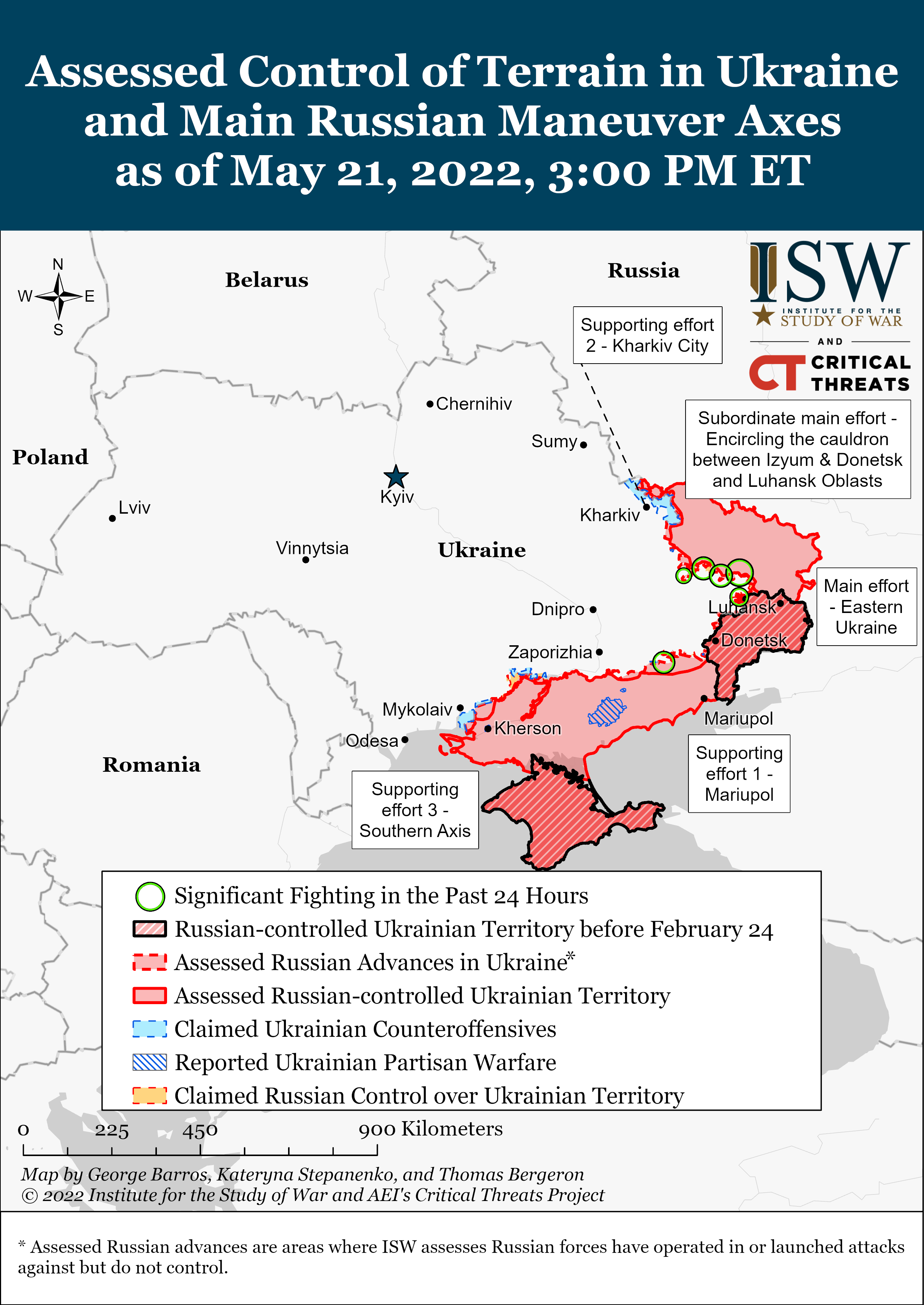 ISW has updated its assessment of the four primary efforts Russian forces are engaged in at this time.  We have stopped coverage of supporting effort 4, “Sumy and northeastern Ukraine,” because it is no longer an active effort.

Russian forces made gains in the Rubizhne-Severodonetsk-Lysychansk area and intensified efforts to capture Severodonetsk on May 21. Russian troops blew up a bridge across the Severskyi Donetsk River between Severodonetsk and Lysychansk, setting conditions to sever Ukrainian ground lines of communication (GLOCs) and take  Severodonetsk.[4] Pro-Russian milbloggers wrote about the beginning of the Battle of Severodonetsk on May 20 and claimed that Russian forces are closing in on the area from the north, east, and south.[5] The milbloggers emphasized the importance of disrupting Ukrainian GLOCs between Lysychansk and Severodonetsk, which are facilitated by at least two major bridges across the Severskyi Donetsk River. Russian forces’ destruction of at least one of the two bridges between the two towns will likely hinder Ukrainian GLOCs to Severodonetsk and indicate a Russian effort to encircle the city.[6] Russian forces reportedly conducted attacks against several towns around Popasna, which may allow them to push northward toward Severodonetsk.[7] Russian claims about their gains around Popasna remain unconfirmed by open sources as of the time of this publication.[8] 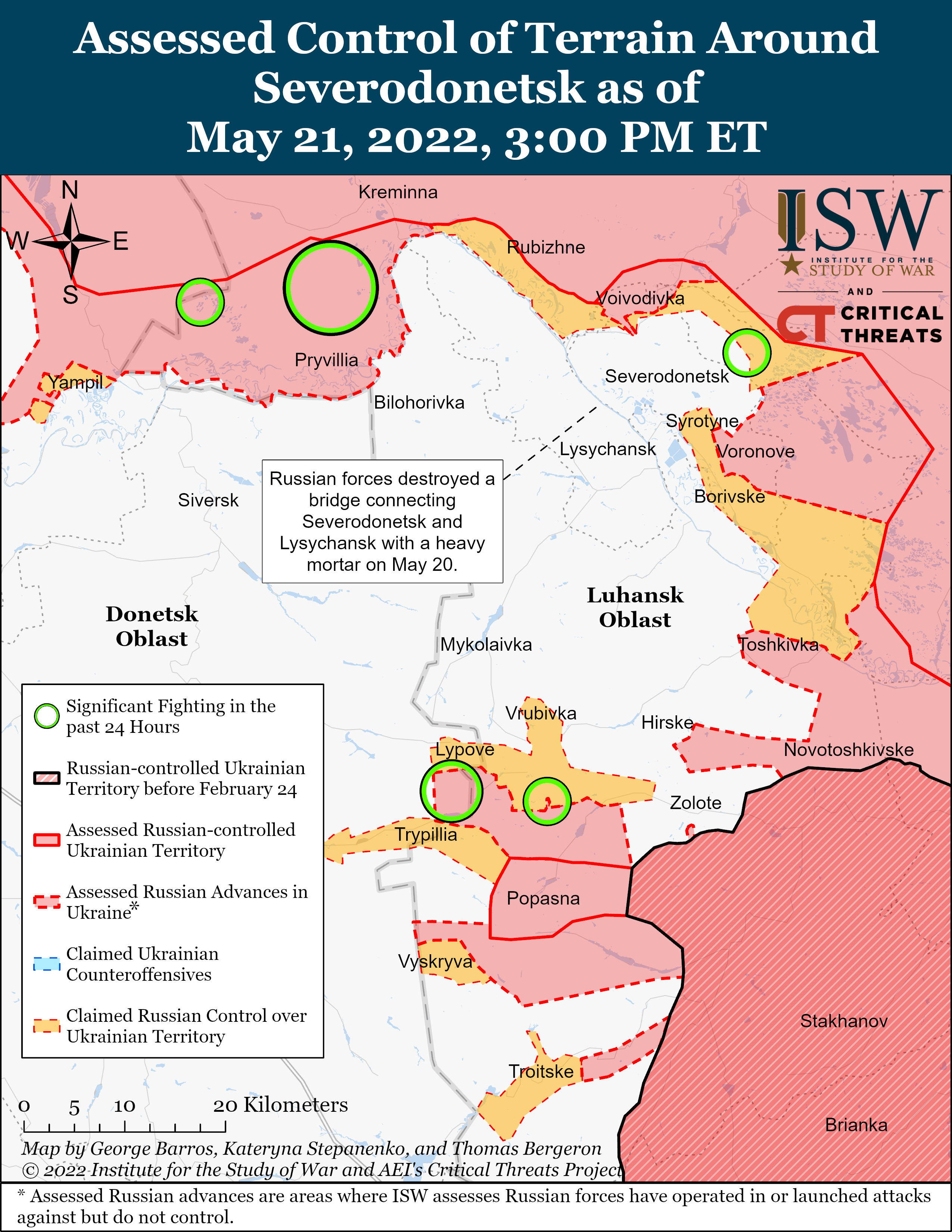 Russian forces focused on offensive operations around Lyman but did not make any confirmed advances on May 21.[9] The Ukrainian General Staff reported that Russian troops are fighting in Lypove, Vasylivka, Marinka, and Novomykhailivka under air and artillery support and that Russian forces plan to resume operations in the area of Yampil-Siversk (just east of Lyman) by crossing the Severskyi Donets River.[10] The main Russian effort in the Lyman area will likely focus on advancing westward to reach the Donetsk-Kharkiv Oblast administrative border and merge with operations to the south of Izyum. 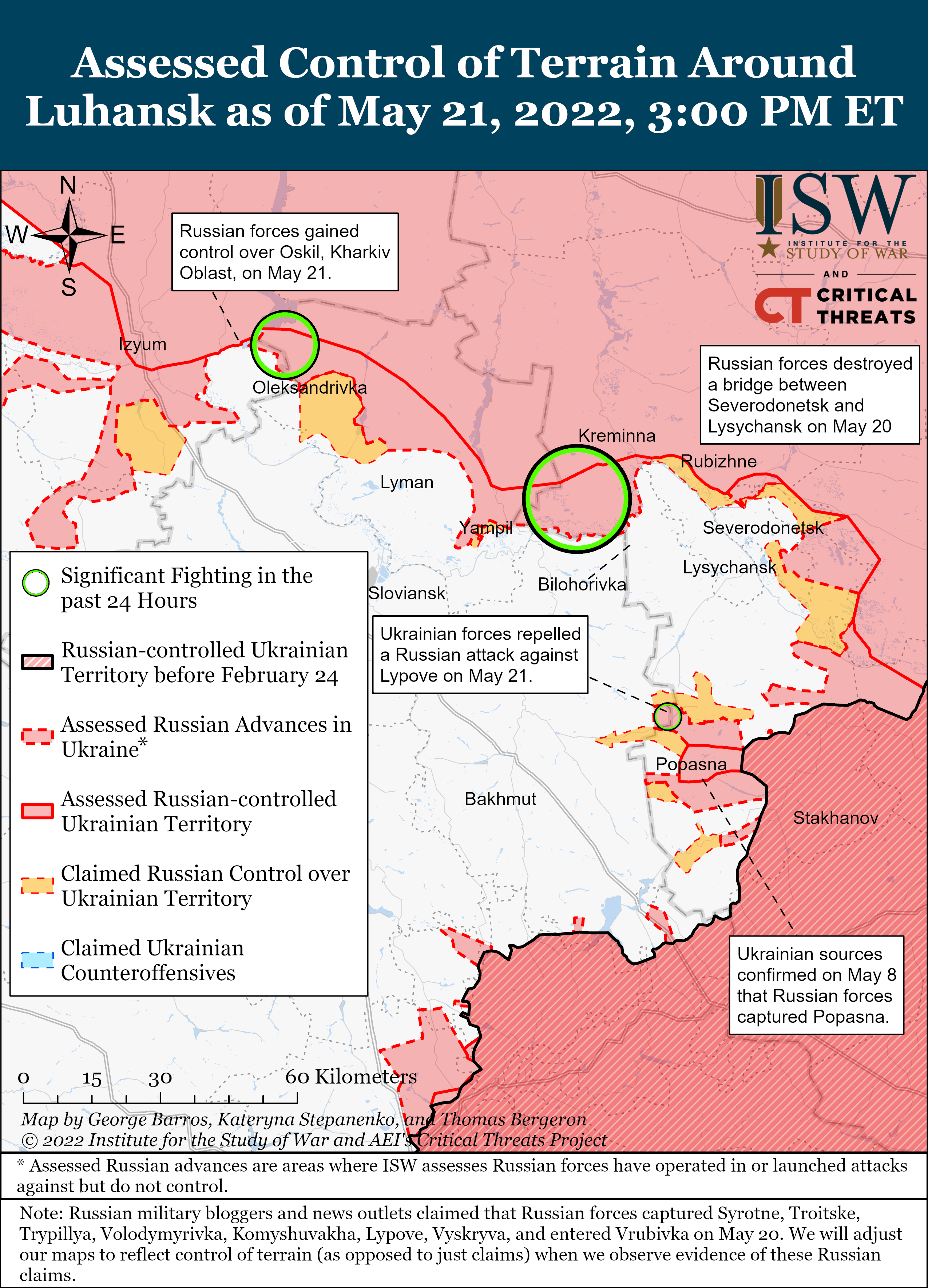 The Russian Ministry of Defense claimed full control of Mariupol as the last group of Ukrainian fighters surrendered and left the Azovstal Steel Plant on May 21.[11] The announcement of the conclusion of hostilities in Mariupol comes a month after Russian President Vladimir Putin and Defense Minister Sergey Shoigu claimed victory in the Battle of Mariupol on April 21.[12] Russian forces reportedly began demining the territory of the plant and restoring the Port of Mariupol.[13]

Russian occupation forces are likely intensifying “filtration” processes to consolidate control of Mariupol. Ukrainian Ombudsman Lyudmila Denisova stated that up to 4,000 men from Mariupol are now in filtration camps outside of the city, and Advisor to the Mayor of Mariupol Petro Andryushchenko claimed that Chechen Rosgvardia troops are taking over control of filtration points as DNR forces redeploy to other areas.[14] The information space in Mariupol will likely become increasingly restricted in the coming weeks as Russian forces shift their attention from the capture of Azovstal to consolidating occupational control over the city.

Russian forces maintained their positions to prevent further Ukrainian advances toward the Russian border and conducted air and artillery strikes north of Kharkiv City on May 21.[15] The Ukrainian General Staff noted that Russia intends to strengthen its grouping around Kharkiv City with unspecified elements of the 1st Guards Tank Army.[16] The Internal Minister of the Luhansk People’s Republic (LNR) additionally claimed that its personnel are operating in Vovchansk, northern Kharkiv Oblast.[17] These reports indicate that Russian forces are reinforcing their presence north of Kharkiv City to hold their current positions and push back potential Ukrainian advances further north toward the international border and east toward Russian GLOCs heading toward Izyum. 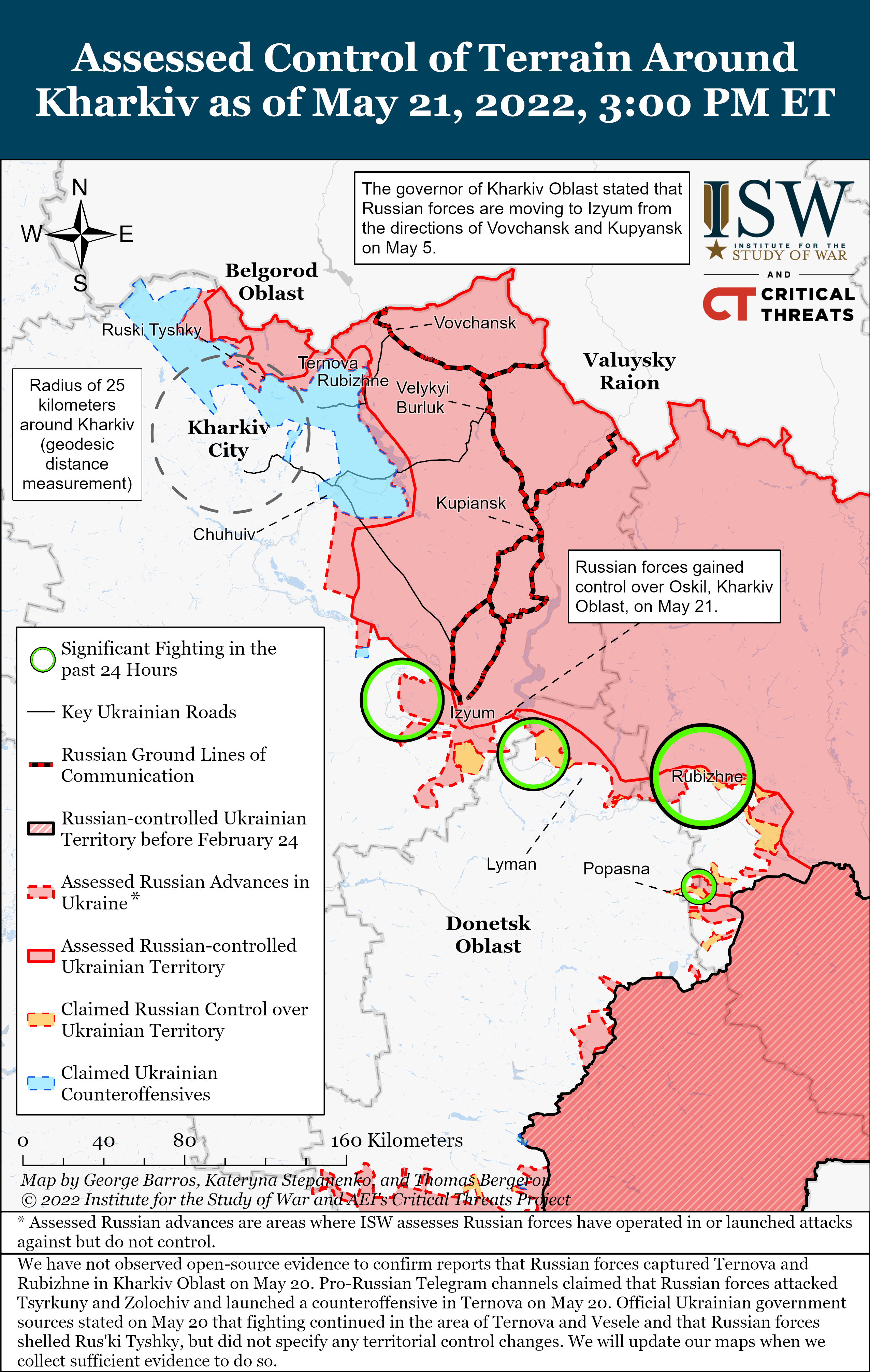 Russian forces may be preparing for an offensive to capture the remainder of northern Kherson Oblast and push toward Zaporizhia City despite not making any confirmed advances on the southern axis on May 21.[18] The Kherson Regional State Administration stated that Russian troops are replenishing their grouping in Vysokopillyya and Arkhangelske, northern Kherson Oblast, in anticipation of increased combat activity in the area of the Kherson-Mykolaiv Oblast border.[19] The Zaporizhia Regional Military Administration noted that there is a high concentration of Russian forces in Inzhenerne, south of Huliapole, indicating that Russian troops are potentially preparing for continued offensives toward Huliapole.[20] The Zaporizhia Regional Military Administration claimed that occupying forces in Melitopol are hanging banners to celebrate the 220th anniversary of the Taurida Governate, which may indicate Russian forces intend to make occupied areas in Kherson and Zaporizhia a quasi-republic like the LNR or DNR, but also emphasizes lack of consistency in handling occupation agendas across Ukraine.[21] Russian forces additionally shelled and launched missile strikes on Mykolaiv, Odesa, Zaporizhia, and Kherson oblasts.[22] 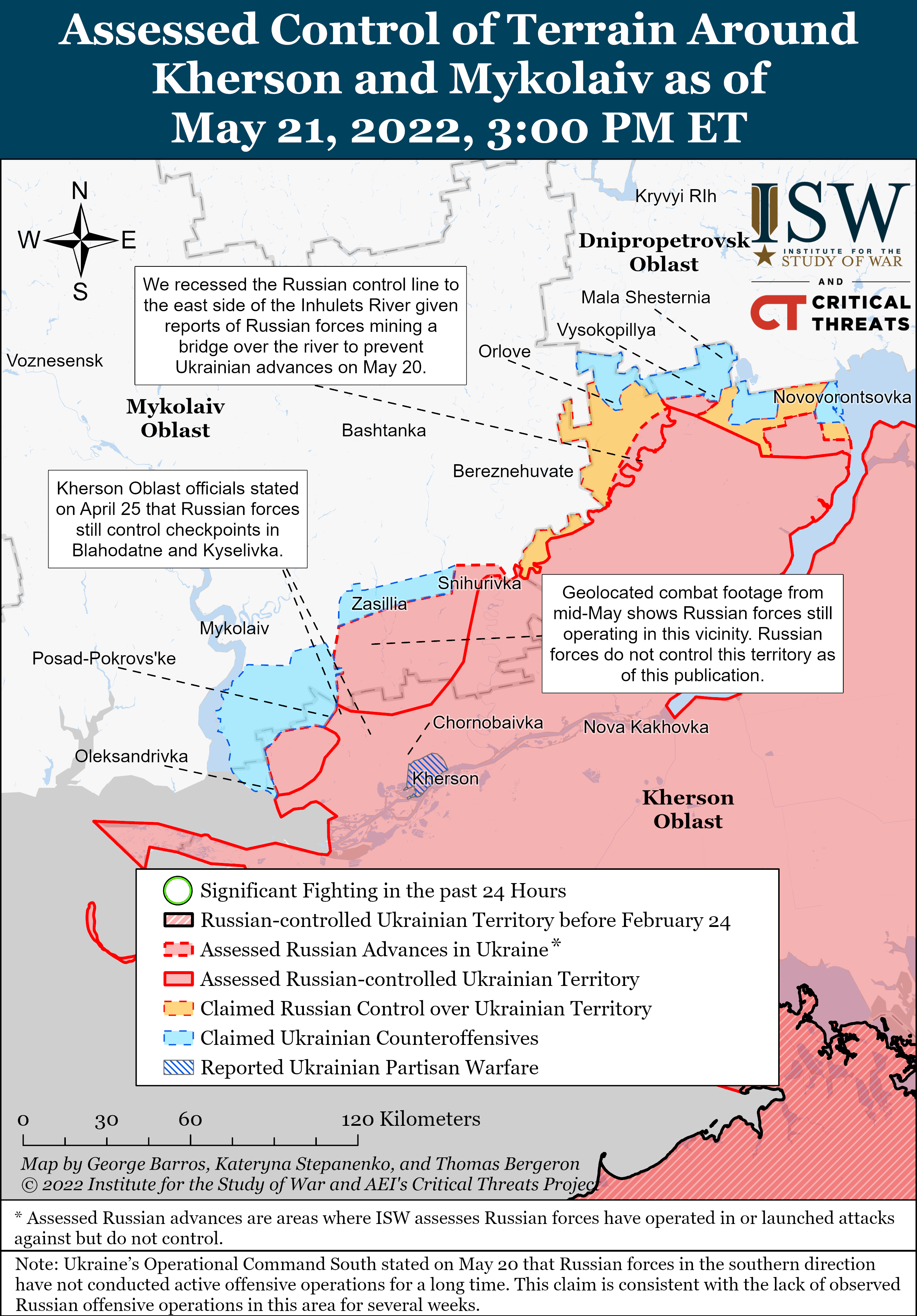 Ukrainian authorities are reportedly strengthening border security between Ukraine and Transnistria.[23] The local Ukrainian border guard detachment announced new restrictions prohibiting the civilian use of drones, night vision equipment, and navigation of small boats in the area. The Ukrainian General Staff reported that Ukrainian forces are protecting the border and conducting counter-sabotage measures.[24] 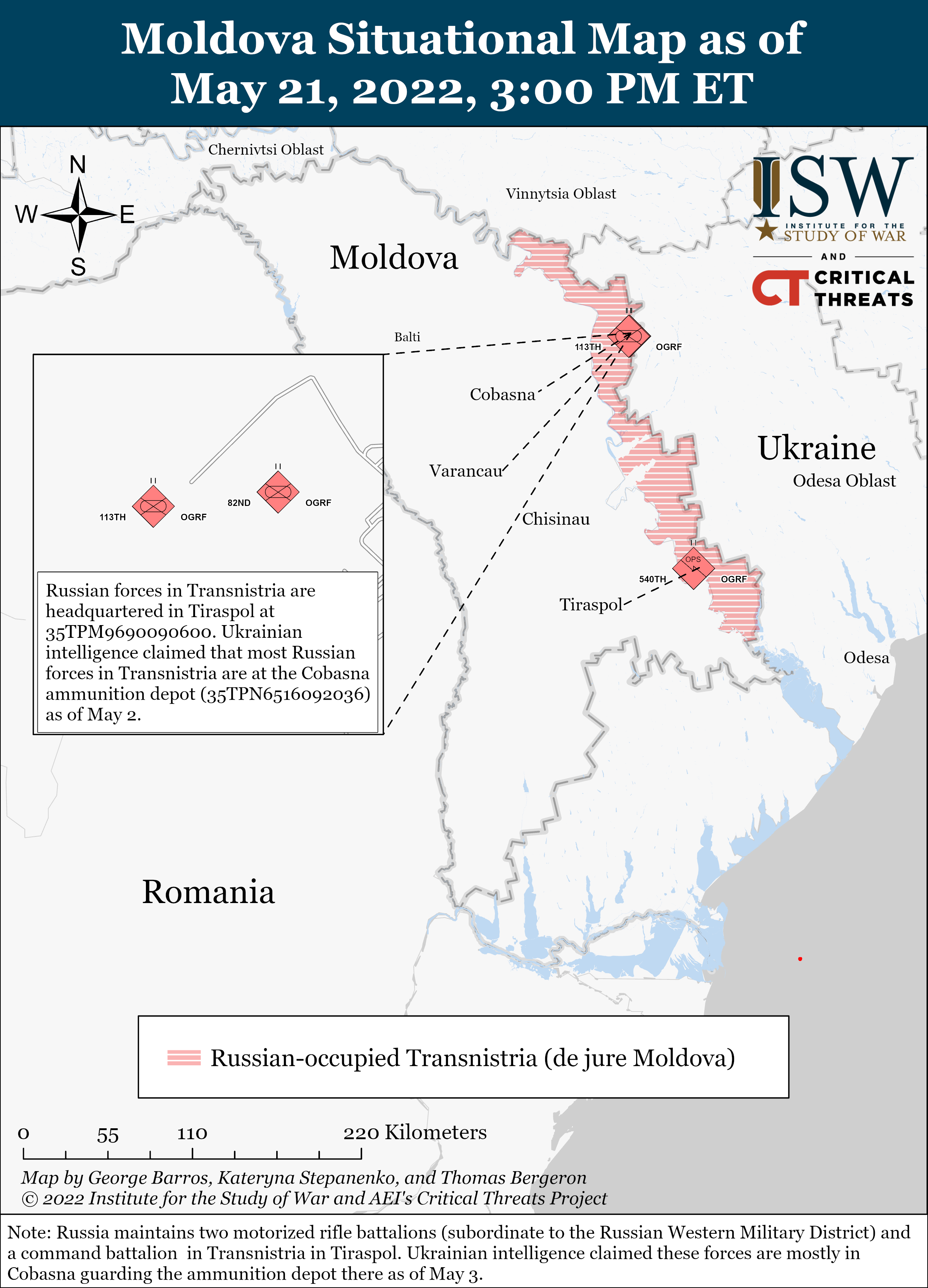