Russian forces have likely abandoned efforts to complete a single large encirclement of Ukrainian forces in eastern Ukraine and are instead attempting to secure smaller encirclements—enabling them to make incremental measured gains. Russian forces are likely attempting to achieve several simultaneous encirclements of small pockets of Ukrainian forces in Donetsk and Luhansk oblasts: the broader Severodonetsk area (including Rubizhne and Lysychansk), Bakhmut-Lysychansk, around Zolote (just northeast of Popasna), and around Ukrainian fortifications in Avdiivka. Russian forces have begun steadily advancing efforts in these different encirclements daily but have not achieved any major “breakthroughs” or made major progress towards their stated objectives of securing the Donetsk Oblast borders or seizing all of Donbas. Luhansk Oblast Administration Head Serhiy Haidai reported that Ukrainian forces only controlled approximately 10 percent of Luhansk Oblast as of May 15 (compared to 30 percent prior to the full-scale Russian invasion on February 24, 2022).[1] Russian forces have secured more terrain in the past week than efforts earlier in May. However, they have done so by reducing the scope of their objectives—largely abandoning operations around Izyum and concentrating on key frontline towns: Russian performance remains poor.

Russian forces will additionally likely face protracted urban combat if they successfully encircle Severodonetsk (as well as in other large towns like Bakhmut), which Russian forces have struggled with throughout the war. Russian forces are committing a significant number of their troops, artillery, and aircraft to defeat Ukrainian defenders in Luhansk Oblast and are likely pulling necessary resources from the Izyum axis, defensive positions around Kharkiv City, Donetsk City, and the Zaporizhia area. Luhansk Oblast Administration Head Serhiy Haidai has previously compared Ukrainian forces in Luhansk Oblast to the previous defenders of Mariupol, which aimed to wear out Russian forces and prevent further offensive operations.[2] The UK Defense Ministry also noted that a Russian victory over Severodonetsk will only worsen Russian logistical issues and extend Russian ground lines of communication (GLOCs).[3] Russian forces are making greater advances in the past week than throughout the rest of May—but these advances remain slow, confined to smaller objectives than the Kremlin intended, and face continued Ukrainian defenses; they do not constitute a major breakthrough.

Senior Kremlin officials are increasingly openly admitting that the Russian offensive in Ukraine is moving slower than anticipated and are grasping for explanations to justify the slow pace. Russian Defense Minister Sergey Shoigu claimed that Russian operations in Ukraine are progressing slowly because Russian forces want to afford civilians the opportunity to evacuate, though Russian forces have targeted Ukrainian civilians throughout the war and repeatedly denied Ukrainian attempts to negotiate humanitarian evacuation corridors.[4] Shoigu’s statement is notably his first admission that Russian forces are behind schedule and is the first official statement on the pace of the war since Belarusian President Alexander Lukashenko stated that the operation was “dragging” on May 4.[5] Russian milbloggers are criticizing Shoigu’s claimed consideration for civilians and claimed that Soviet troops would not have cared if “Nazi” civilians evacuated, part of the growing Russian nationalist reaction that the Kremlin is not doing enough to win the war in Ukraine.[6] Director of the Russian Foreign Intelligence Service Sergey Naryshkin stated that the ultimate goal of the Russian offensive is to ensure “Nazism” is “100% eradicated, or it will rear its head in a few years, and in an even uglier form.”[7] Naryshkin and Shoigu’s statements indicate that Russian officials are likely setting conditions for a protracted war in Ukraine in order to justify slower and more measured advances than initially anticipated.

Forcefully mobilized servicemen from the Donetsk and Luhansk People’s Republics continued to protest the Russian and proxy military command. Servicemen of the 3rd Infantry Battalion of the 105th Infantry Regiment from the Donetsk People’s Republic (DNR) recorded a video appeal to DNR Head Denis Pushilin wherein they claimed they were mobilized on February 23 and that they have been forced to actively participate in hostilities despite their lack of military experience. The battalion stated that they served on the frontlines in Mariupol and have been redeployed to the territory of the Luhansk People’s Republic (LNR) with only 60% of their original personnel and are now dealing with severe morale issues and physical exhaustion. The battalion notably claimed that the servicemen did not go through routine medical inspection prior to service and that many are suffering from chronic illnesses that should have rendered them ineligible for service. The video appeal is consistent with numerous reports from Ukrainian and Western sources that proxy forces are largely forcibly mobilized, poorly trained, and suffering from declining morale, but is notable due to the willingness of the DNR servicemen to publicly express their discontent.[8] 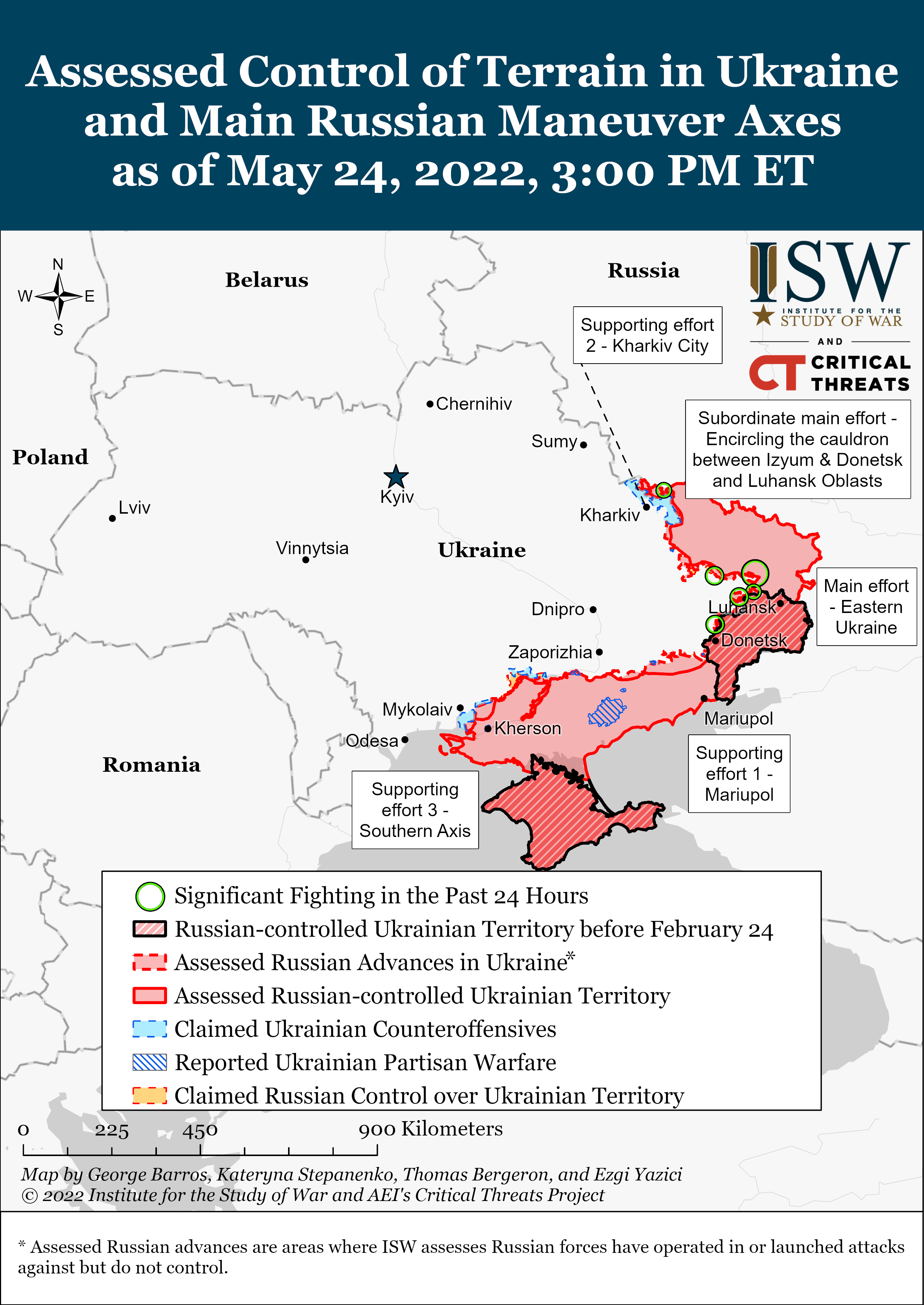 Russian forces did not launch offensive operations south of Izyum on May 24 but continued to reconnoiter Ukrainian positions in the region.[9] The Ukrainian General Staff reported that Russian forces are likely preparing to resume an offensive toward Slovyansk and deployed additional artillery units to southern neighborhoods of Izyum.[10] Izyum City Council Deputy Maxim Strelnik claimed that over 20,000 Russian personnel in what he reported are 25 battalion tactical groups (BTGs) are preparing to resume a large encirclement of Ukrainian troops from the north.[11] ISW cannot independently confirm these Russian troop numbers or their unit structure, and Strelnik may be referencing a Ukrainian General Staff report from April 22 that twenty-five Russian BTGs were operating around Izyum.[12] The Russian units around Izyum are likely heavily degraded and it is highly unlikely Russia is operating twenty-five full strength BTGs (at 800-900 personnel per BTG, this would be 20,000-22,500 personnel in total). Many Russian personnel on this axis are likely in rear areas or not combat effective. Moreover, poor Russian tactics largely nullify the weight of numbers on this front, as Russian forces remain confined to launching narrow attacks down major roads that often do not employ more than a single BTG—at most—at a time. 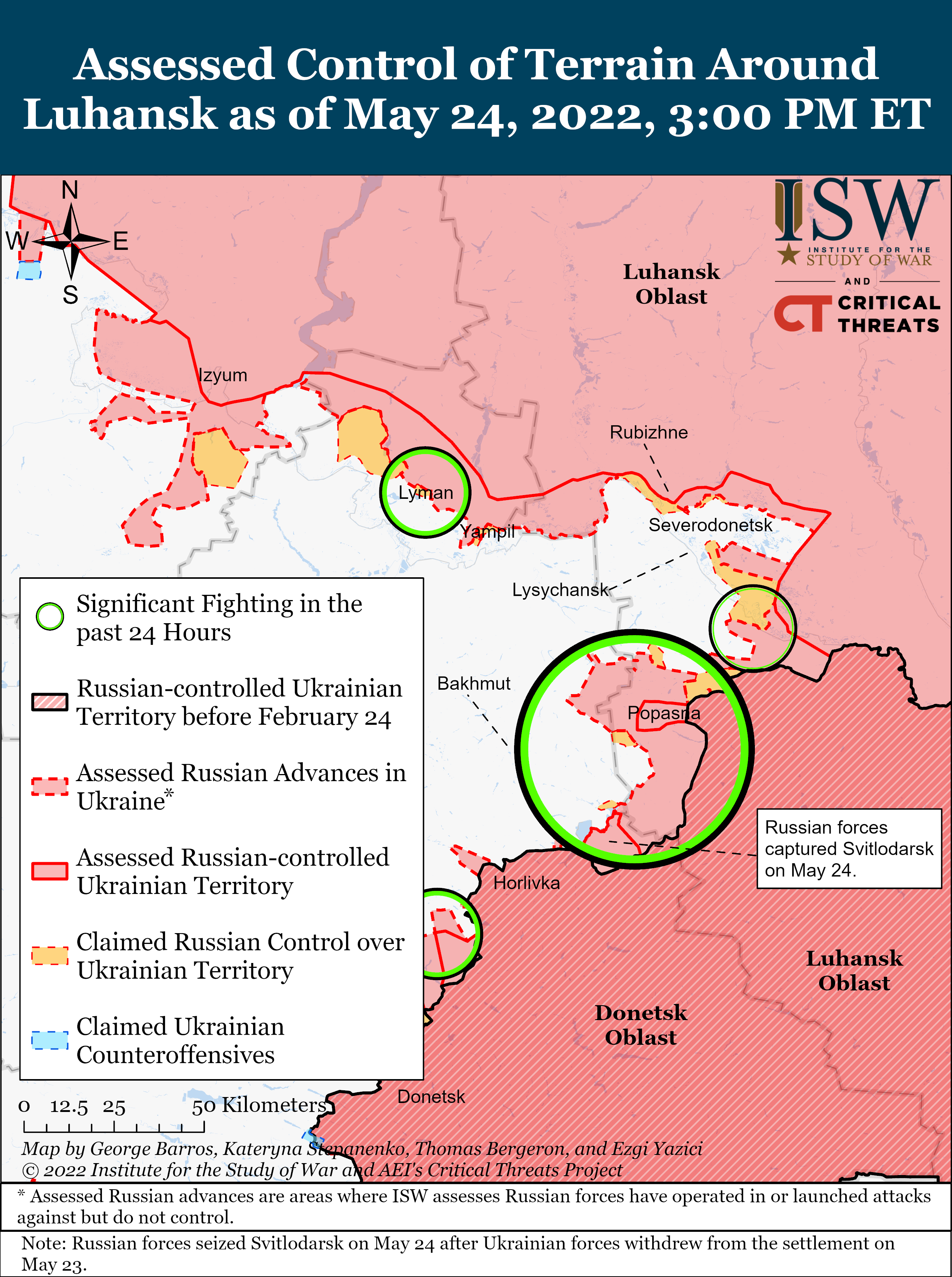 Russian forces continued to prioritize attacks against Lyman rather than Slovyansk on May 24, likely to support a shallow encirclement of Ukrainian troops northwest of Severodonetsk. Pro-Russian military Telegram channels also noted that Russian and proxy forces have adopted a new strategy abandoning attacks toward Slovyansk and Barvinkove in favor of the Battle for Severodonetsk.[13] ISW previously forecasted that Russian forces would scale down their initial objectives of reaching the Donetsk Oblast border in favor of securing the Luhansk Oblast borders.[14] Donetsk People’s Republic (DNR) Head Denis Pushilin announced that Russian forces began an assault on Lyman but claimed to have only seized the northern half of the settlement.[15] ISW cannot independently confirm Pushilin’s claims. Geolocated social media videos showed that Russian forces heavily bombarded Lyman on May 23, likely in preparation for an assault on the town.

Ukrainian forces likely conducted a controlled withdrawal southwest of Popasna to defend Ukrainian ground lines of communication (GLOCs) in Bakhmut against Russian offensives. Russian forces seized Svitlodarsk, approximately 21 km southwest of Popasna, after Ukrainian forces retreated and damaged a bridge and dam over the Myronivskyi Reservoir on May 23.[18] Ukrainian forces previously targeted the reservoir on May 14, likely in preparation for a gradual withdrawal from the area.[19] Russian forces continued to advance just northeast and east of Popasna, with social media footage showing the arrival of reinforcements to support the push toward the Lysychansk and Bakhmut highways.[20] DNR sources also claimed that Russian forces are attempting a shallow encirclement of weakening Ukrainian troops in Avdiivka, but ISW cannot confirm these claims.[21] 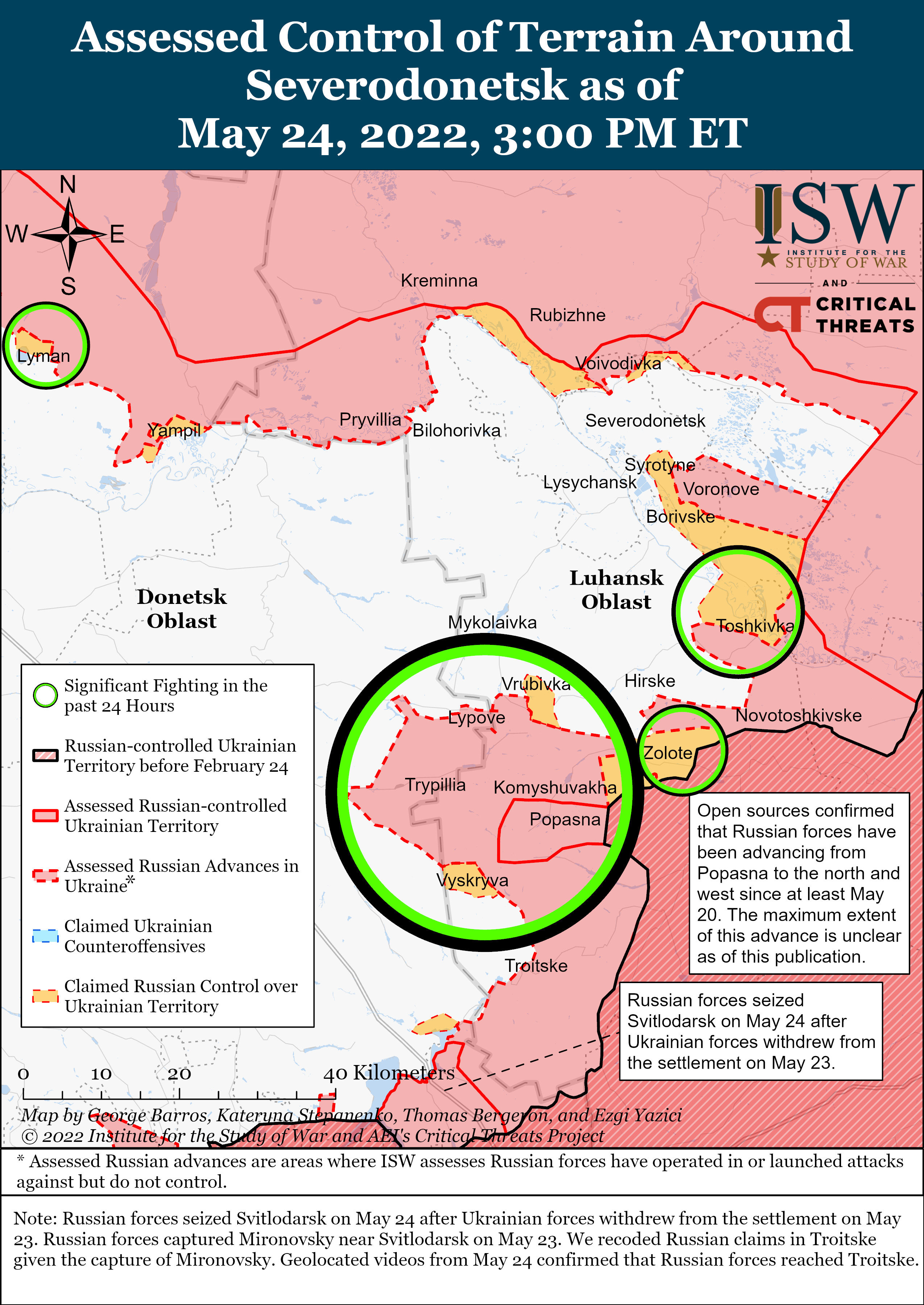 Russian and proxy forces continued to “restore” Mariupol on May 24. Troops focused on demining the ruins of the city, the port, and the sea.[22] Head of the Russian National Defense Control Center Colonel-General Mikhail Mizintsev claimed on May 24 that Russian forces will open a humanitarian “green corridor” in the Black Sea to allow the safe exit of foreign ships from the Port of Mariupol on May 25.[23]

Head of the Donetsk People’s Republic (DNR) Denis Pushilin stated that the DNR is developing rules and procedures for tribunals in Mariupol to try and punish Ukrainian soldiers for war crimes.[24] Pushilin’s statement notably comes the day after the first Russian soldier was found guilty in a Ukrainian war crimes trial. Mariupol’s occupation administration will likely use such tribunals to enforce their rhetorical agendas and strengthen judicial control over Mariupol and other occupied areas.

Russian forces continued to focus on maintaining and improving their positions north of Kharkiv City on May 24. The Ukrainian General Staff reported that Russian forces are conducting ground assaults on the outskirts of Ternova, a village recaptured by Ukrainian forces in early May in the far north of Kharkiv Oblast and 5 km from the international border.[25] A Russian Telegram channel claimed that Russian forces have restored control over the entirety of Ternova, and while this claim cannot be confirmed at this time, it indicates that Russian forces are focusing on retaking control of settlements near the border.[26] Russian troops additionally shelled Kharkiv City and its environs.[27] Sentinel satellite imagery from May 24 notably showed a Russian rear base constructed in Belgorod Oblast in early April within 15 km of the Ukrainian border.[28] Russian forces are likely using this and other rear bases to support operations in northern Kharkiv Oblast and seek to screen them from Ukrainian shelling. 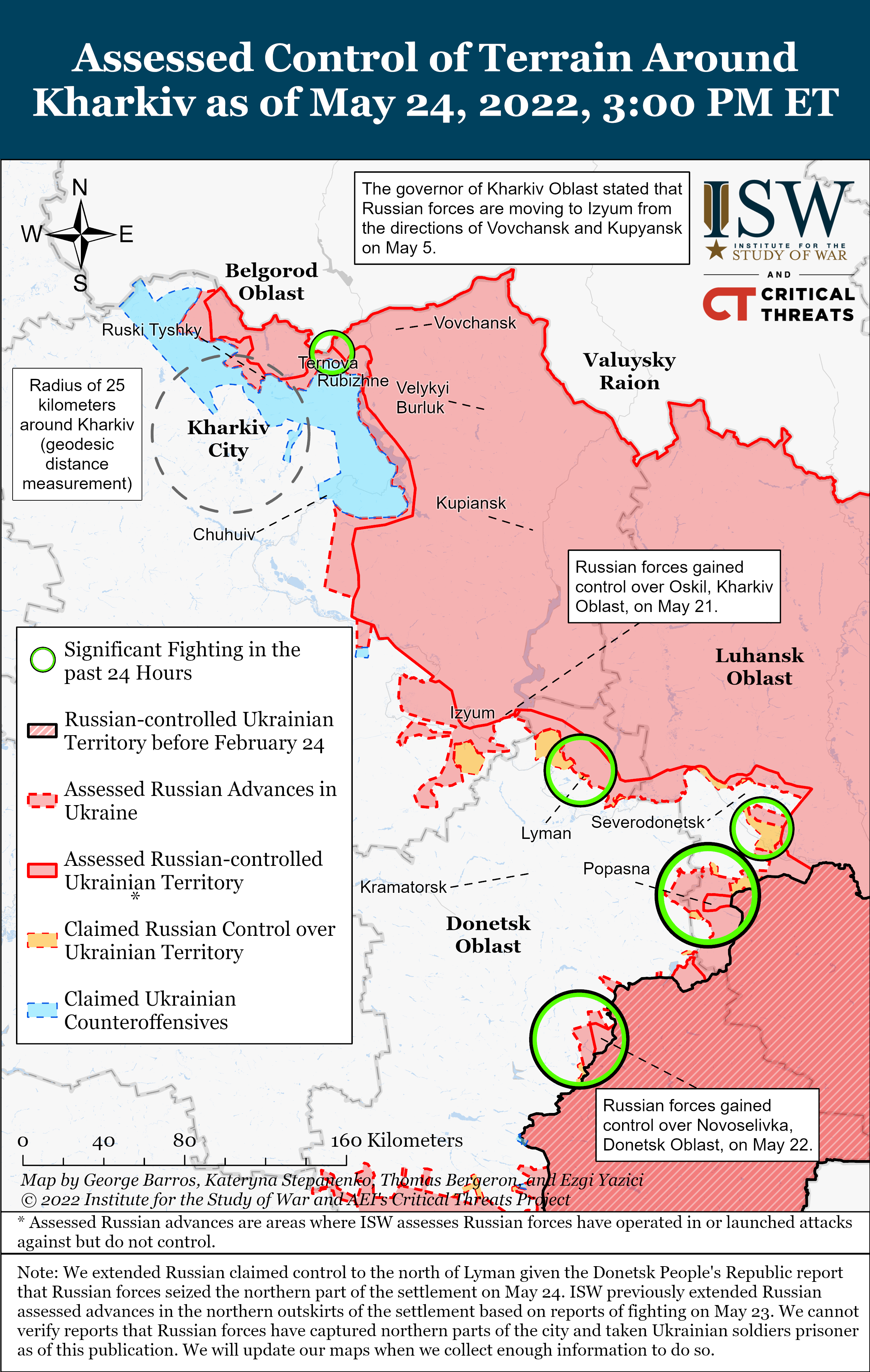 Russian forces continued to reinforce their positions on the Southern Axis but did not make any confirmed advances on May 24.[29] Russian troops are reportedly strengthening their grouping in Vasylivka and Kamyanske (both south of Zaporizhzhia City) in preparation for offensives to the north.[30] The Ukrainian General Staff noted that Russian troops in Crimea are forming reserves and a spokesman for the Odesa Military Administration stated that Russian forces are reportedly deploying S-400 missile systems to northwest Crimea. Russian milblogger Alexander Zhuchkovsky, however, called the situation on the Zaporizhia frontline of the Southern Axis “deplorable,” and indicated that Ukrainian artillery pressure has been effective in slowing Russian troop movements.[31] Zhuchkovsky noted that Zaporizhia Oblast is not a priority for Russian command and much of the Russian grouping in the area is comprised of reservists. His assertion is corroborated by the fact that Russian forces continued to shell Ukrainian positions in Kherson, Zaporizhia, and Dnipropetrovsk Oblasts on May 24, but did not engage in any active ground attacks.[32]

Recent Ukrainian partisan actions in Zaporizhia Oblast continue to pressure Russian occupation forces, which are continuing actions to strengthen administrative control of occupied areas.[33] Occupation authorities in Kherson, Berdyansk, and Melitopol stated that both cities will be included in the ruble zone.[34]