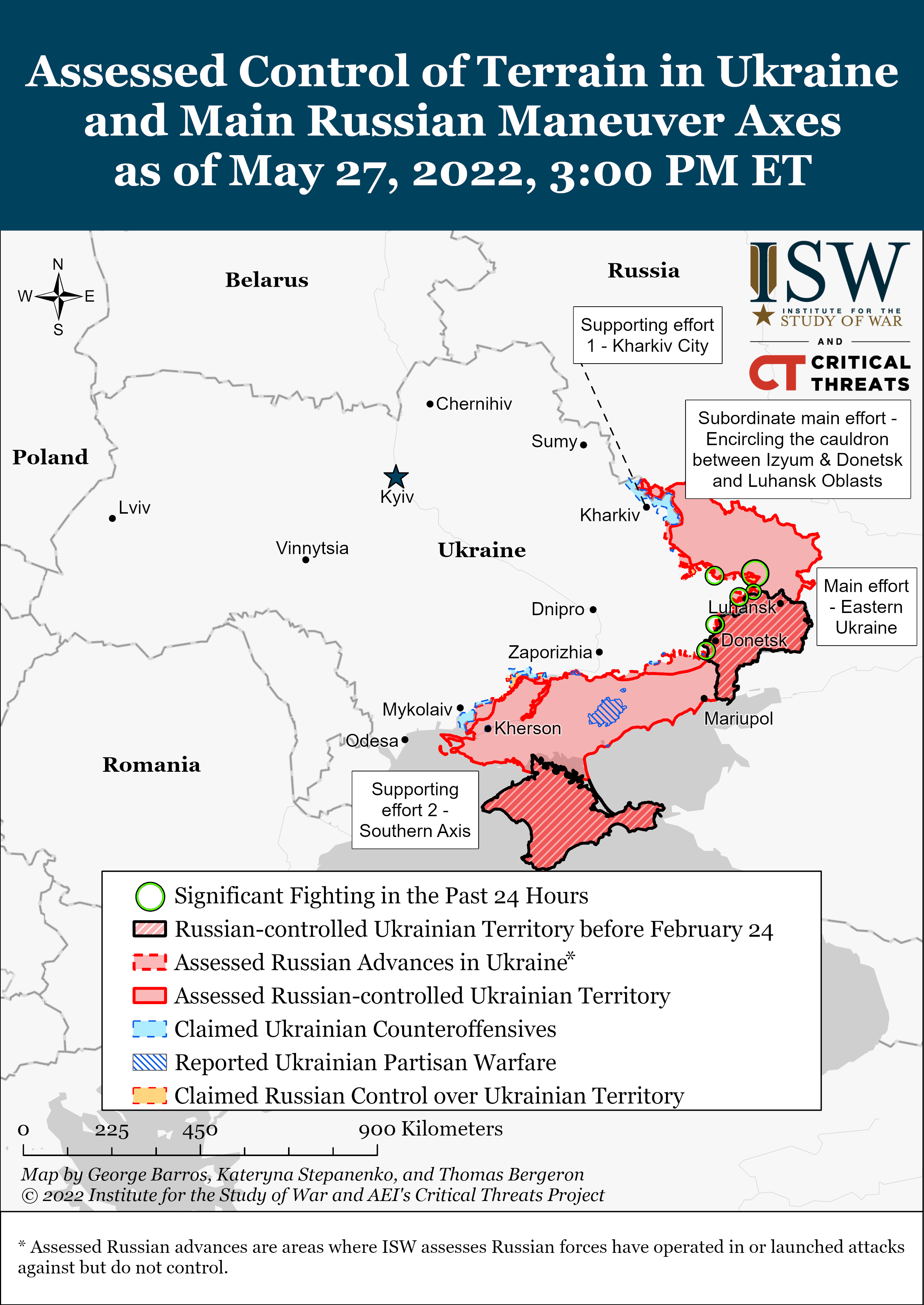 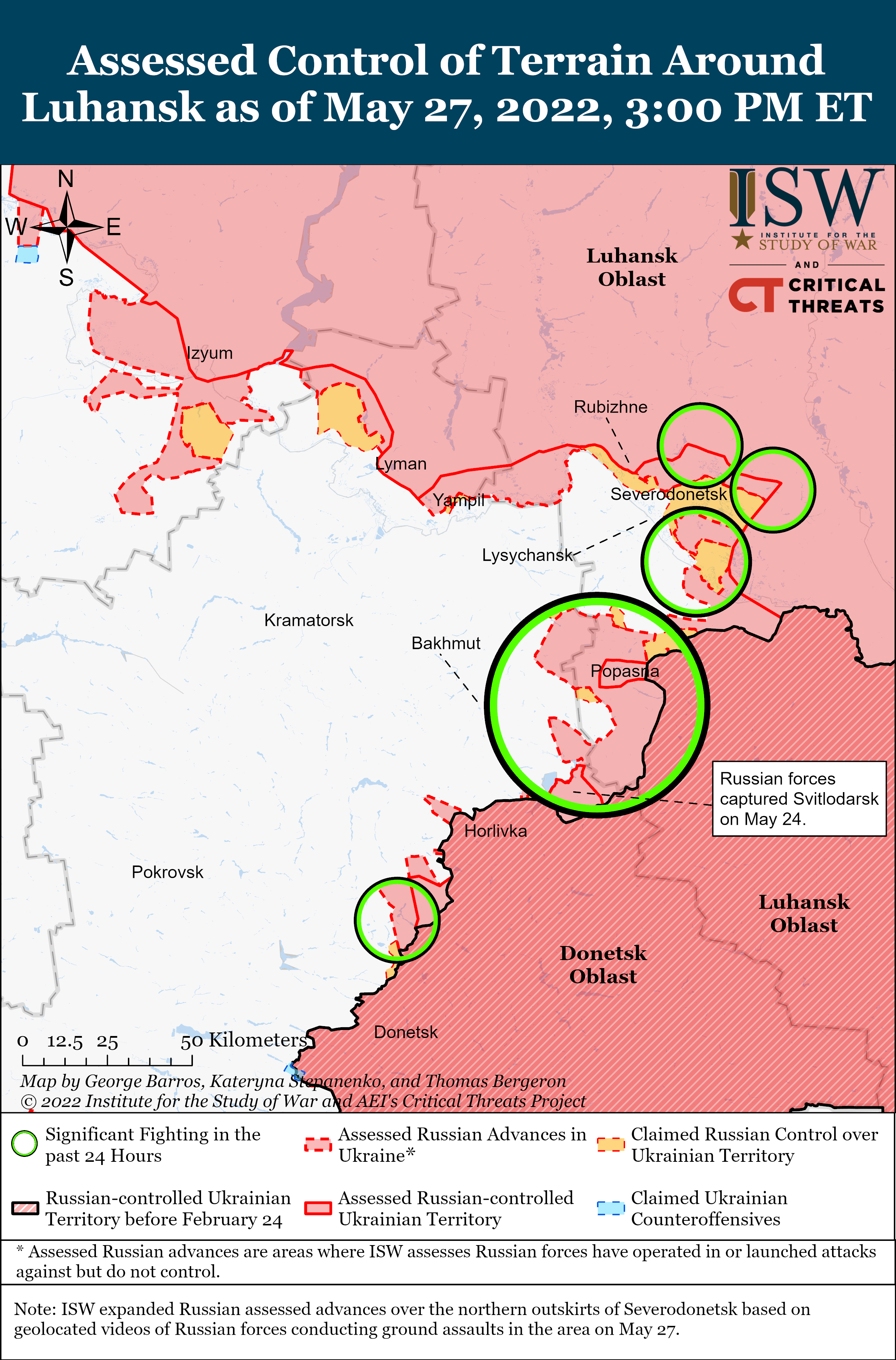 Russian forces likely seek to advance toward Slovyansk from Lyman to the north due to stalled operations south of Izyum.[6] The Ukrainian General Staff reported that Russian forces shelled two settlements approximately 30km and 35km southeast of Izyum and conducted limited attacks south from Lyman.[7] Russian forces have been unable to advance south from Izyum on the E40 highway due to Ukrainian resistance along the road and may now be changing their approach to attack toward Slovyansk from the northeast. The Ukrainian General Staff also noted that Russian forces in Kharkiv Oblast are training personnel to replenish infantry, tank, and artillery units, and deployed the 29th Separate Railway Brigade from Smolensk to Kharkiv Oblast, likely to generate new forces and restore logistics to attempt to resume stalled offensive operations southeast of Izyum.[8]

Russian forces in Lyman are additionally attacking southeast toward Siversk as part of ongoing efforts to encircle Ukrainian defenders in the town.[9] Russian forces will likely attempt to seize the roads leading to Severodonetsk from the northwest to sever Ukrainian ground lines of communication (GLOCs) in Luhansk Oblast.[10] The Ukrainian General Staff reported that Russian forces fired mortars and rocket-propelled grenades on settlements within a 20km range of northwestern Siversk and launched an airstrike on Siversk on May 27.[11] Russian forces in Lyman appear to be dividing their efforts—attacking both southwest to support stalled forces in Izyum and southeast to advance on Siversk; they will likely struggle to accomplish either objective in the coming days based on past Russian performance. 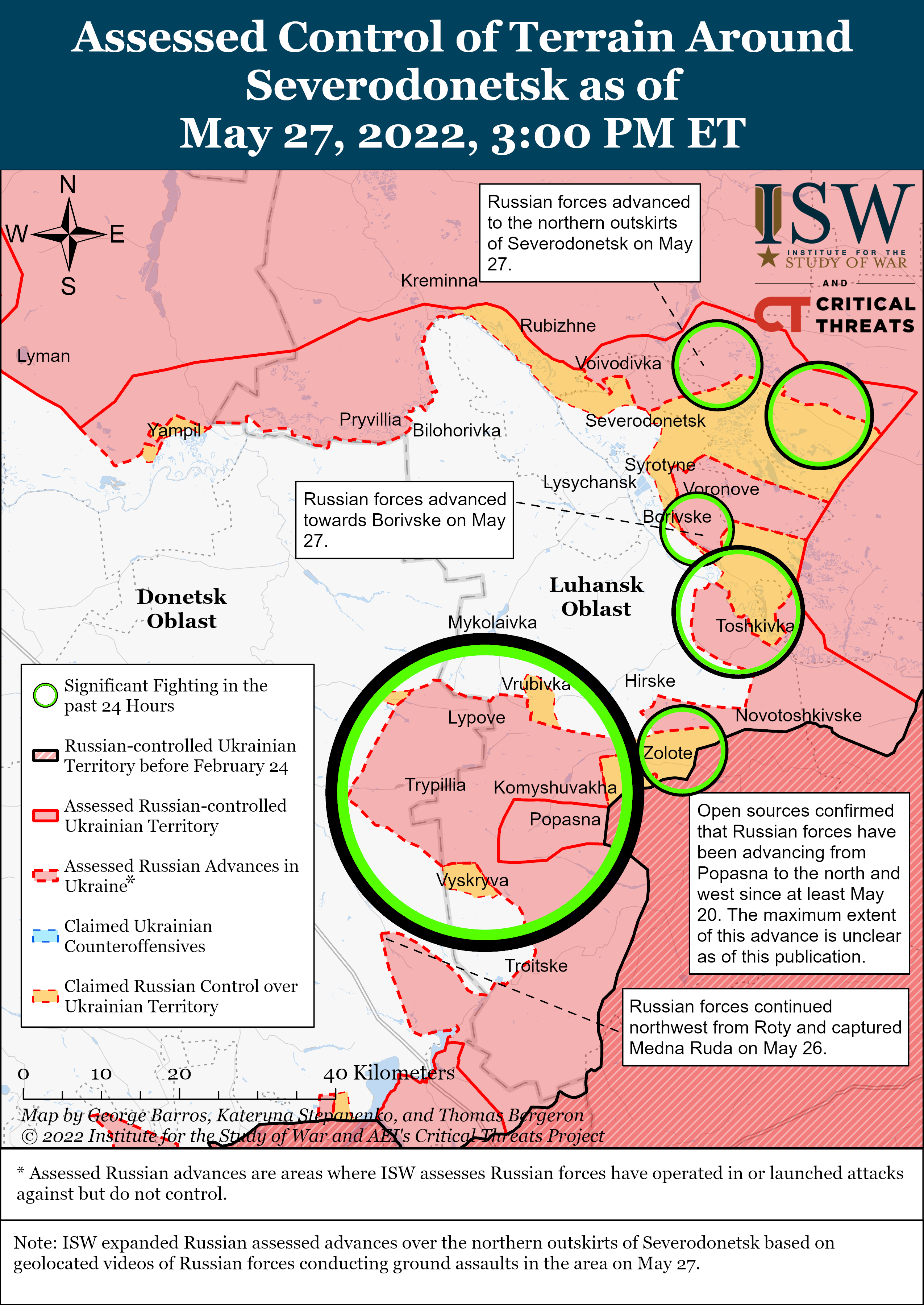 Russian forces did not launch any ground assaults against Ukrainian defenders north of Kharkiv City on May 27. Russian forces continued systematic shelling of Ukrainian-liberated villages to preserve their defensive positions near the Ukrainian-Russian state border.[14] Ukraine’s Security Service reported that entire Russian units rioted and refused to conduct an offensive operation on Kharkiv City, though ISW cannot independently confirm this claim.[15] 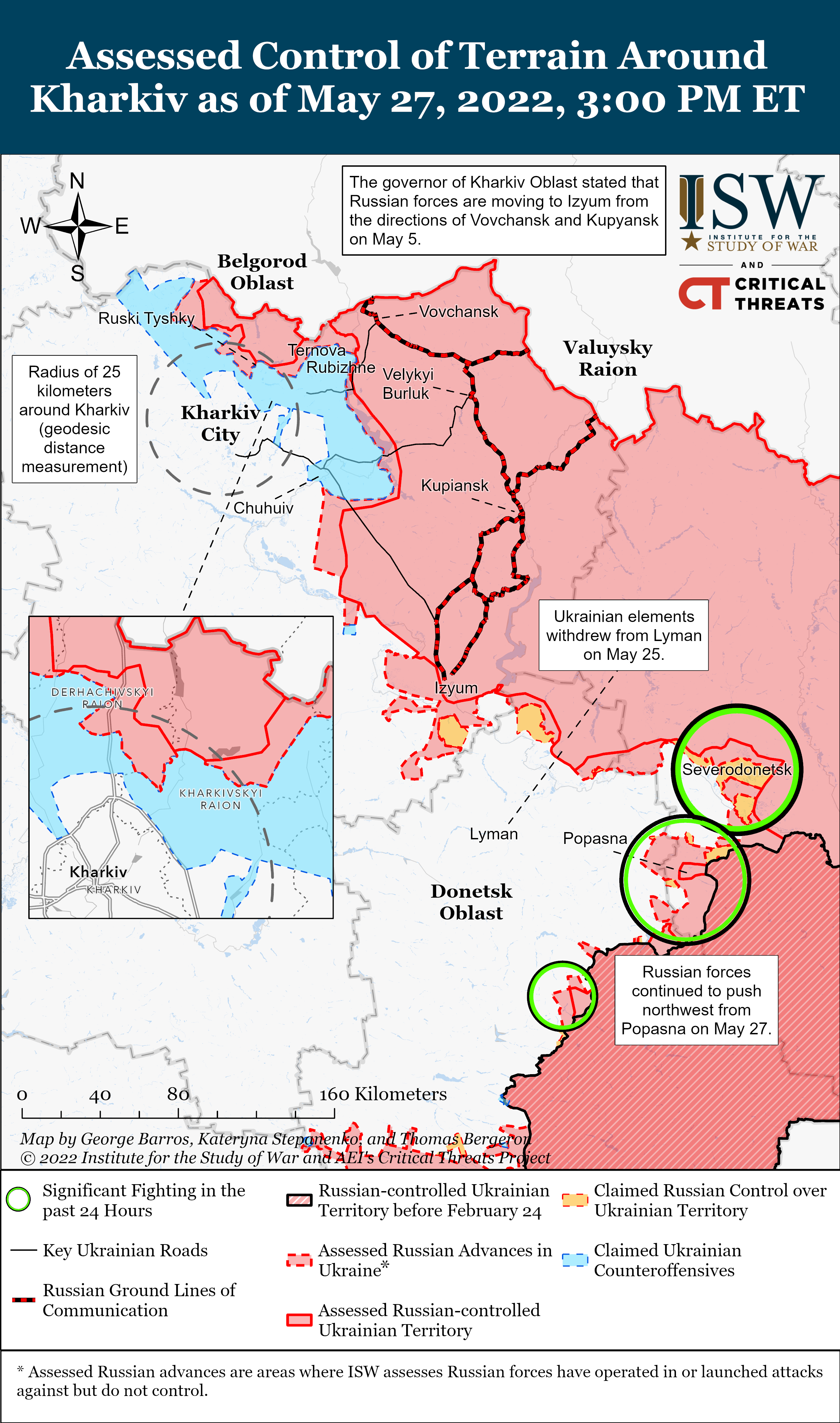 Russian forces launched an unsuccessful ground attack near the Kherson-Mykolaiv Oblast border and continued artillery and airstrikes throughout southern Ukraine, the first attack near Kherson for several weeks.[21] This attack is unlikely to be part of a wider offensive operation. Russian forces also launched a missile strike on the Motor Sich Plant in Zaporizhia City on May 26 but missed the target and damaged residential infrastructure nearby.[22] 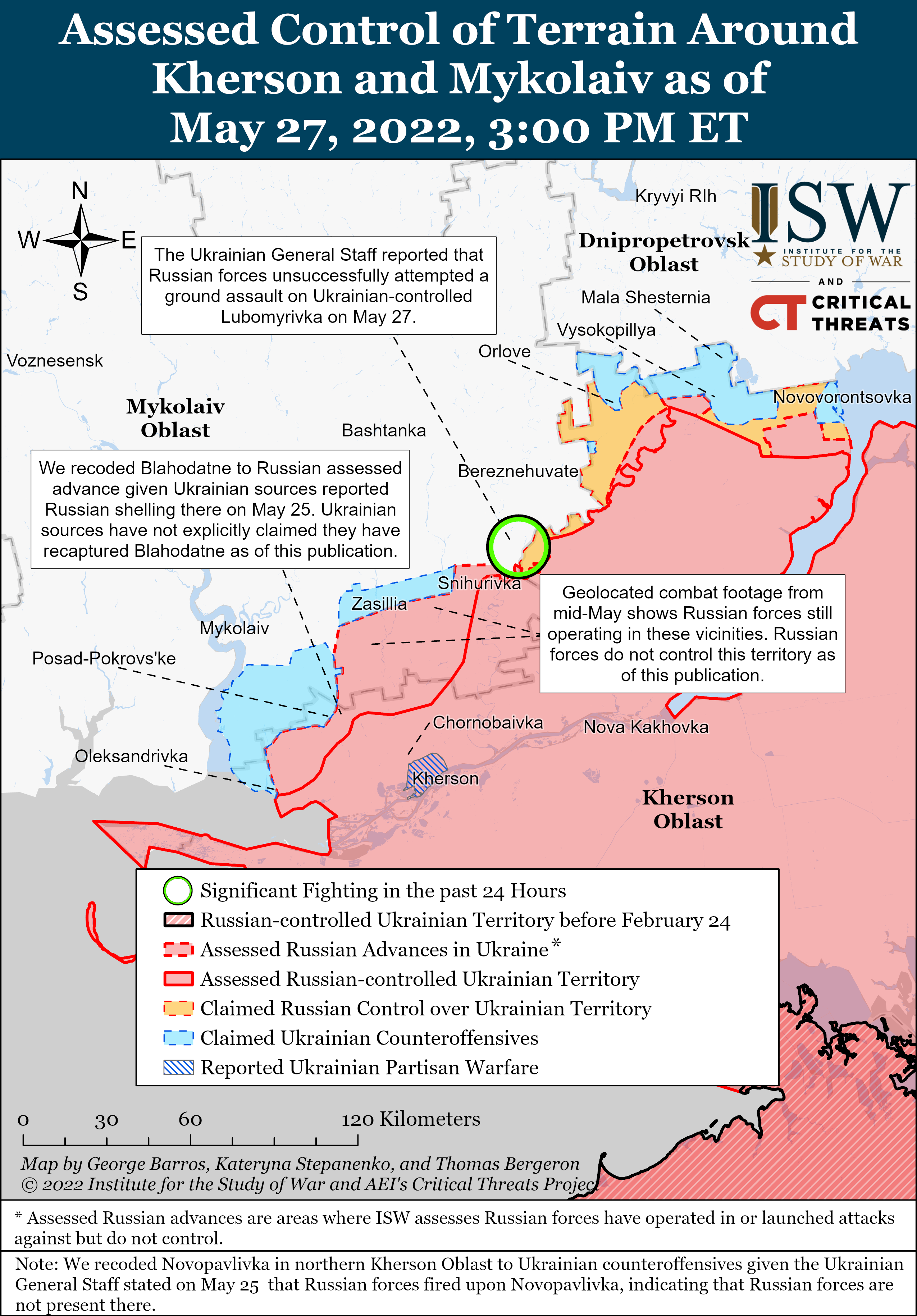 Russian forces continued to set conditions for the long-term occupation of Ukraine’s southern regions. Ukrainian Military Intelligence Directorate (GUR) Representative Vadym Skibitsky reported that Russian occupation forces are likely preparing for referendums on the occupied territories in September or October.[23] Russian occupation authorities began transitioning Zaporizhia Oblast to the Russian time zone and introducing Russian license plates; they also promised to establish new subsidy and tax systems in the near future.[24] Russian occupation officials are additionally reportedly attempting to create an Internal Ministry subordinate to the Kherson Oblast Civil-Military Administration to support occupation administration and possibly support integration with Russia’s own Internal Ministry.[25] The Zaporizhia Oblast Military Administration reported that Russian authorities continued to hand out Russian passports to Melitopol residents, which will allow the Kremlin to mobilize and control the movements of inhabitants of the occupied territories and conscript them for military service. These efforts will also allow the Kremlin to claim it is protecting Russian citizens, as it did in the DNR and LNR prior to February 24.[26]