Russian forces continued to assault Severodonetsk on May 29 but did not make any confirmed advances; Russian progress in intense urban combat will likely be slow. The Russian campaign in eastern Ukraine—which previously aimed to capture the entirety of Luhansk and Donetsk Oblasts—is now focused almost entirely on Severodonetsk. Russian troops are unlikely to be able to conduct multiple simultaneous operations and will likely further deprioritize advances southeast of Izyum and west of Lyman in favor of concentrating available forces on Severodonetsk in the coming days. 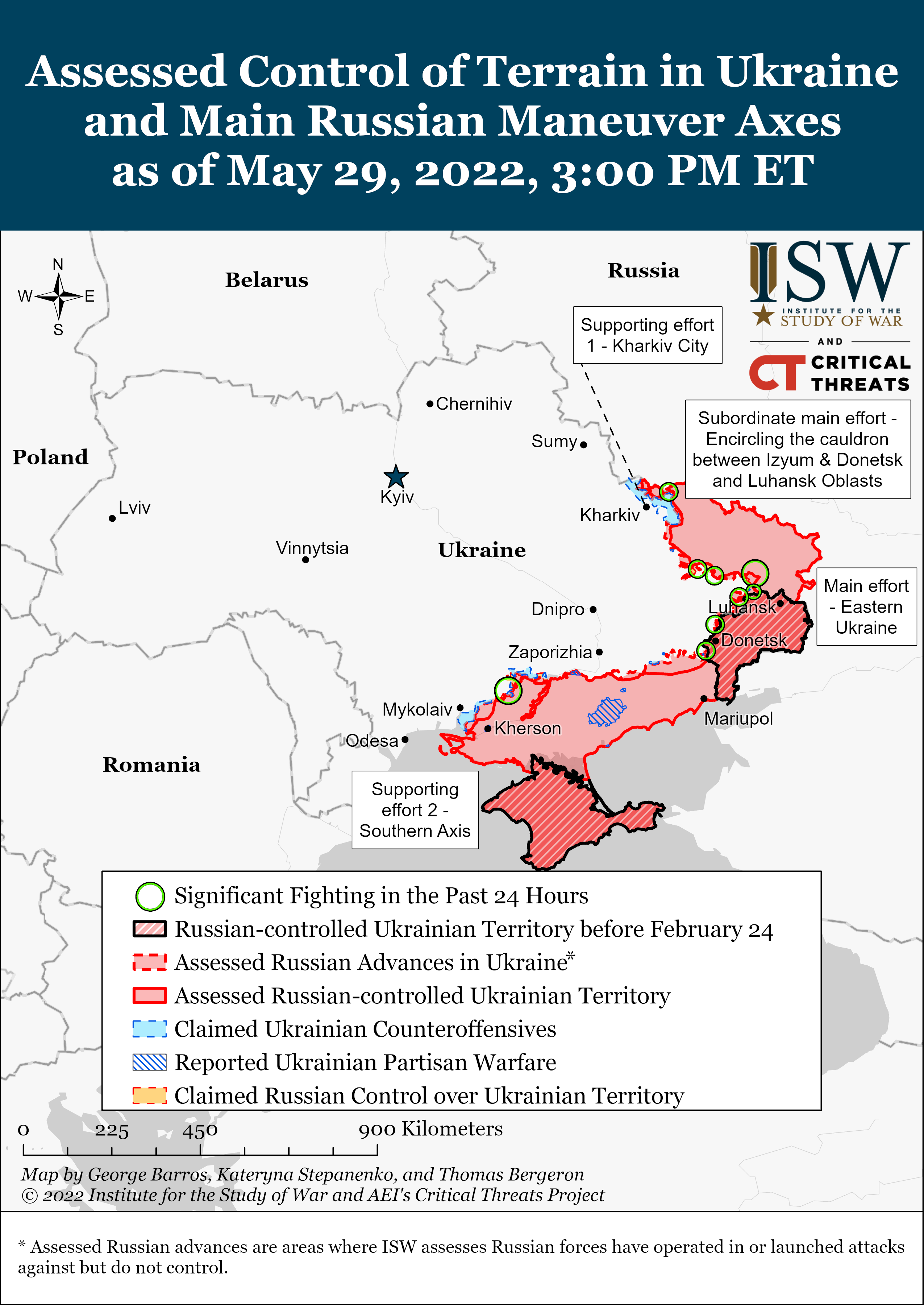 Russian forces continued offensive operations southeast of Izyum toward Slovyansk but did not make any confirmed advances on May 29. Russian troops unsuccessfully attacked Bohorodychne, about 30 km southeast of Izyum.[2] Russian forces additionally shelled Ukrainian positions southwest of Izyum around Husarivka, Velyka Komyshuvakha, and Virnopillya, and to the southeast of Izyum around Dovehenke and Raihorodok.[3] Russian efforts south of Izyum have likely shifted from being a key effort to a subordinate action increasingly intended to support offensive operations around Lyman. Advances in both southeastern Kharkiv Oblast and northern Donetsk Oblast are now subordinate to the dominant Russian effort in the Donbas, the encirclement of Severodonetsk.[4] 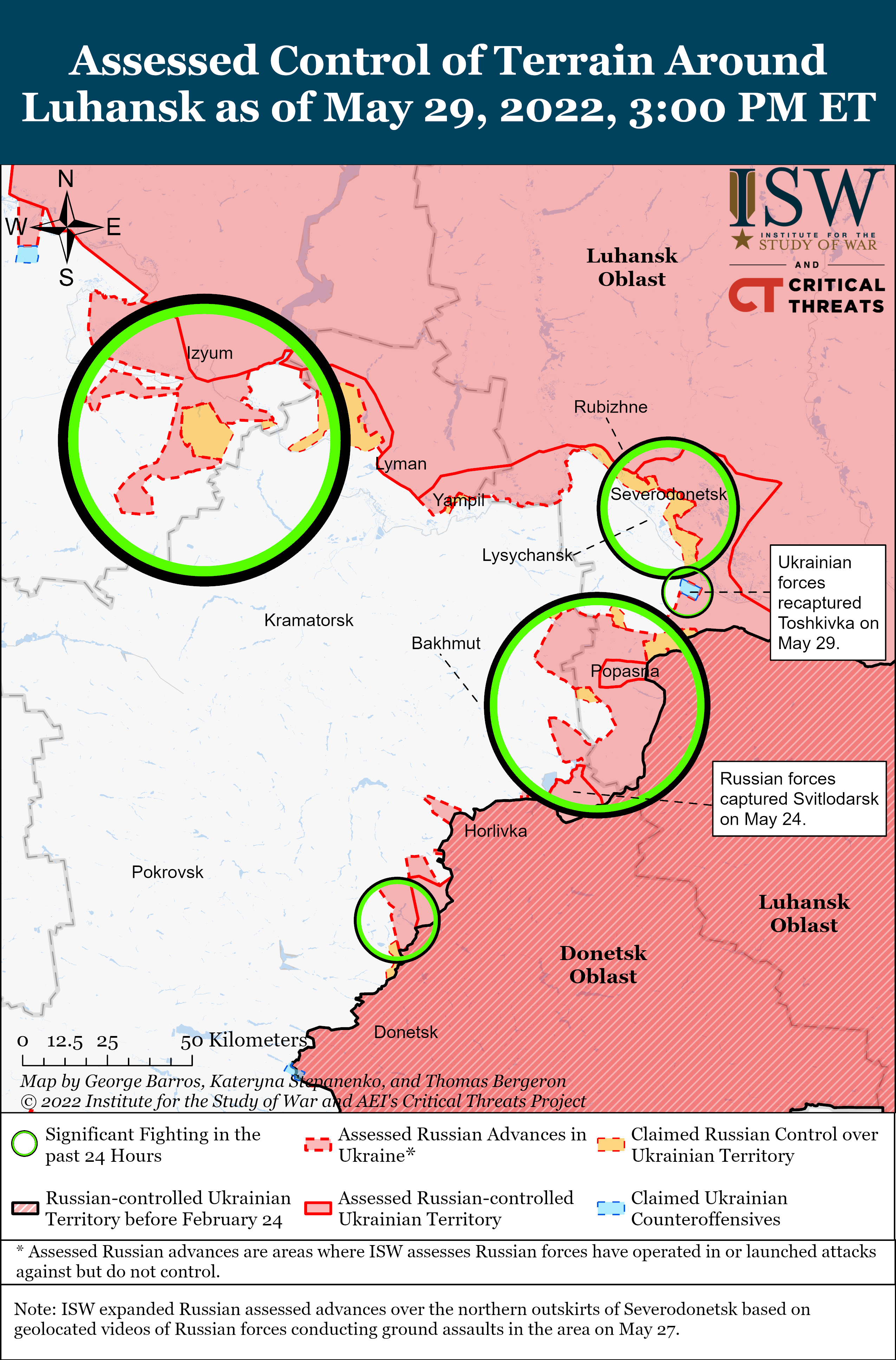 Russian forces continued ground assaults against Severodonetsk itself on May 29, though ISW cannot confirm any specific advances. The Ukrainian General Staff stated on May 29 that Russian troops intend to encircle Severodonetsk and Lysychansk and cut the main Ukrainian ground lines of communication (GLOCs) in the area, as ISW has previously assessed.[5] Russian forces additionally attempted to advance northward toward Severodonetsk from Bobrove and Ustynivka.[6] Head of Luhansk Regional State Administration Serhiy Haidai emphasized that Ukrainian troops are still in control of Severodonetsk, denying Chechen Leader Ramzan Kadyrov’s false claims that Severodonetsk is under full Russian control as of May 28.[7] Haidai additionally claimed that Ukrainian forces conducted a limited counterattack and drove a Russian grouping out of Toshkivka, which may put pressure on Russian operations in the vicinity of Popasna.[8]

Russian forces continued offensive operations to push westward of the Luhansk Oblast administrative border and cut Ukrainian GLOCs northeast of Bakhmut, rather than advancing toward Bakhmut itself, on May 29. The Ukrainian General Staff noted that Russian troops are fighting around Volodymyrivka, Vasylivka, Komyshuvakha, and Myronivka those troops likely intend to reach and block the Bakmut-Lysychansk T1302 highway.[9] Russian forces around Donetsk City continued unsuccessful assaults around Avdiivka.[10] The Ukrainian General Staff noted that Russian troops intensified air, mortar, artillery, and rocket strikes in western Donetsk Oblast around Kurakhove on May 29.[11] The Ukrainian General Staff has not reported any Russian offensive operations around Kurakhove since May 16, and this report may indicate Russian efforts to renew offensive operations in this sector to support stalled Russian operations towards Zaporizhia.[12] 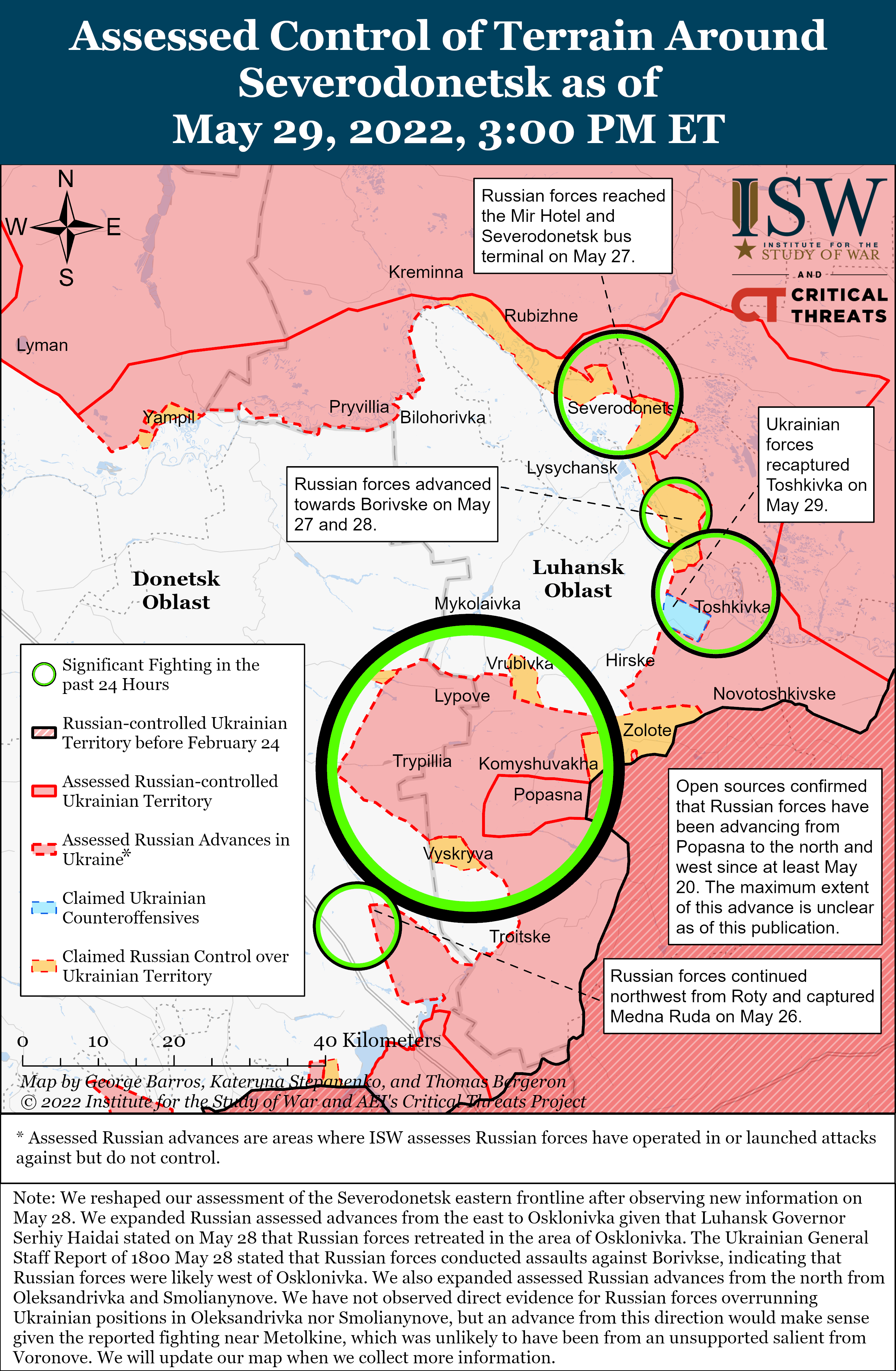 Russian forces focused on maintaining their positions north of Kharkiv City and fired on surrounding settlements on May 29.[13] The Ukrainian General Staff stated that Russian forces fired on Cherkasy Tyshky, Ruski Tyshky, Petrivka, and Ternova to deter further Ukrainian advances toward the international border.[14] A Russian Telegram channel claimed that Ukrainian forces took heavy losses during fighting in Ternova and that Russian troops have subsequently stopped Ukrainian pushes toward the international border.[15] 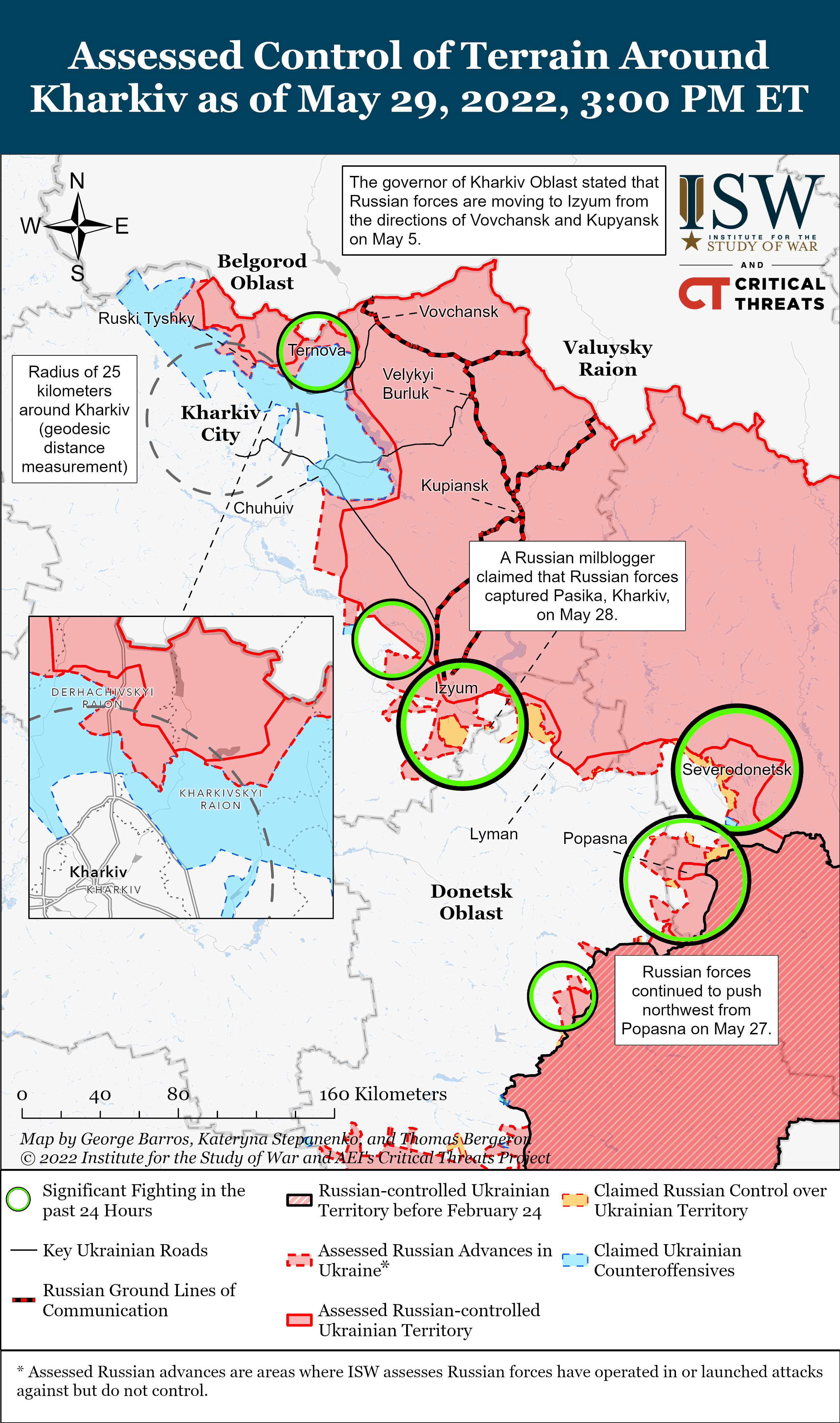 The ongoing Ukrainian counteroffensive in northwestern Kherson Oblast did not make any confirmed advances on May 29, and Russian forces focused on maintaining their defensive positions and launching limited attacks to regain lost ground.[16] The Ukrainian General Staff stated that Russian forces took up defensive positions in Kostromka, a settlement in northwestern Kherson Oblast within 10 km of the Kherson-Mykolaiv oblast border.[17] Reporting by Russian and Ukrainian sources indicates that Ukrainian troops likely conducted a counter-offensive south of the village of Davydiv Brid and east of the Inhulets River on May 28.[18] The Ukrainian General Staff noted that Russian forces are attempting to recapture positions in Andriivka, Bilohirka, and Bila Krynytsia, indicating the Ukrainian counteroffensive south of Davydiv Brid recaptured these positions on the Kherson-Mykolaiv border on May 28.[19] Russian forces are reportedly fighting around Vysokopillya, Dobryanka, and Kochubeivka, all settlements in northern Kherson Oblast.[20] Russian forces conducted artillery strikes against Mykolaiv and Zaporizhzhia Oblasts and a missile strike against Kryvyi Rih.[21] 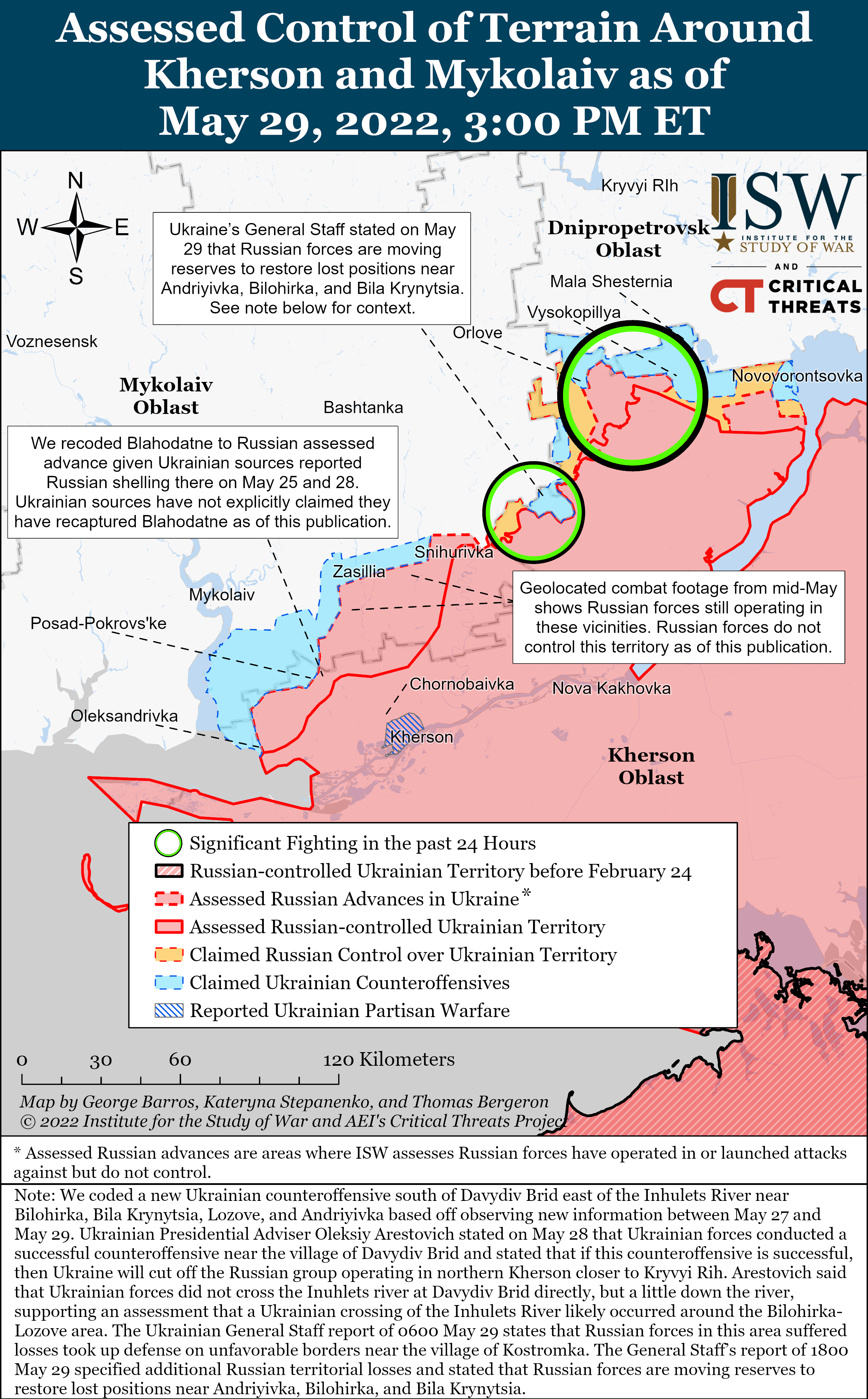 Russian forces continued to consolidate their administrative control of occupied regions on May 29. Russian occupation forces are reportedly shipping looted rolled steel and metal to Russia through the Port of Mariupol.[22] The Russian-backed head of Kherson’s civil-military administration, Kirill Stremousov, told Reuters that the decision for Kherson to join Russia will likely occur next year and walked back his previous statements that Kherson would join Russia automatically by stating there will be a “referendum.”[23] Stremousov said that the occupation administration is focusing on restoring order in Kherson before making decisions on a potential referendum to join the Russian Federation, indicating that Ukrainian partisan activities may be disrupting ongoing efforts to consolidate full Russian administrative control of Kherson Oblast.