Mounting casualties among Russian junior officers will likely further degrade Russian capabilities and lead to further morale breakdowns. The UK Ministry of Defense stated on May 30 that Russian forces have suffered devastating losses amongst mid and junior ranking officers. The UK MoD reported that battalion and brigade level officers continue to deploy forwards and into harm's way—rather than commanding from rear areas and delegating to lower-ranking officers—due to senior Russian officers holding them to an “uncompromising level of responsibility” for their units.[1] The British Defense Ministry further reported that junior officers are in charge of low-level tactical operations due to a lack of professionalism and modernization within the Russian Armed Forces and that the continued losses of these junior officers will complicate command and control efforts, particularly in Battalion Tactical Groups (BTGs) cobbled together from the survivors of multiple other units.[2] ISW previously assessed that continued demoralization and poor command and control among Russian forces could present Ukrainian forces opportunities to conduct prudent counteroffensives, particularly as the Russian military continues to pour resources into the battle of Severodonetsk at the cost of other lines of effort.

Domestic dissent within Russian military circles, claiming that the Kremlin is not doing enough to win the war, continues to grow. Former Russian Federal Security Service (FSB) officer Igor Girkin (also known as Strelkov) condemned Russian Foreign Minister Sergey Lavrov’s statements about the priority of the “special operation” in Ukraine being the liberation of the Donbas.[3] Girkin claimed that the Kremlin has forgone the ideological underpinnings of the conflict by focusing the conflict on the Donbas, rather than the entirety of Ukraine. Girkin complained that Kremlin officials are no longer questioning the legitimacy of the existence of Ukraine and that the concepts of “denazification” and “demilitarization” have been forgotten. Girkin accused the Kremlin of appeasement policies and stated that the threat of defeat continues to grow.

Girkin’s dissent is emblematic of continued shifts within circles of Russian military enthusiasts and ex-servicemen. As ISW has previously reported, the Kremlin has repeatedly revised its objectives for the war in Ukraine downwards due to battlefield failures. The Kremlin is increasingly facing discontent not from Russians opposed to the war as a whole, but military and nationalist figures angry at Russian losses and frustrated with shifting Kremlin framing of the war. Russian officials are increasingly unable to employ the same ideological justifications for the invasion in the face of clear setbacks, and a lack of concrete military gains within Ukraine will continue to foment domestic dissatisfaction with the war. 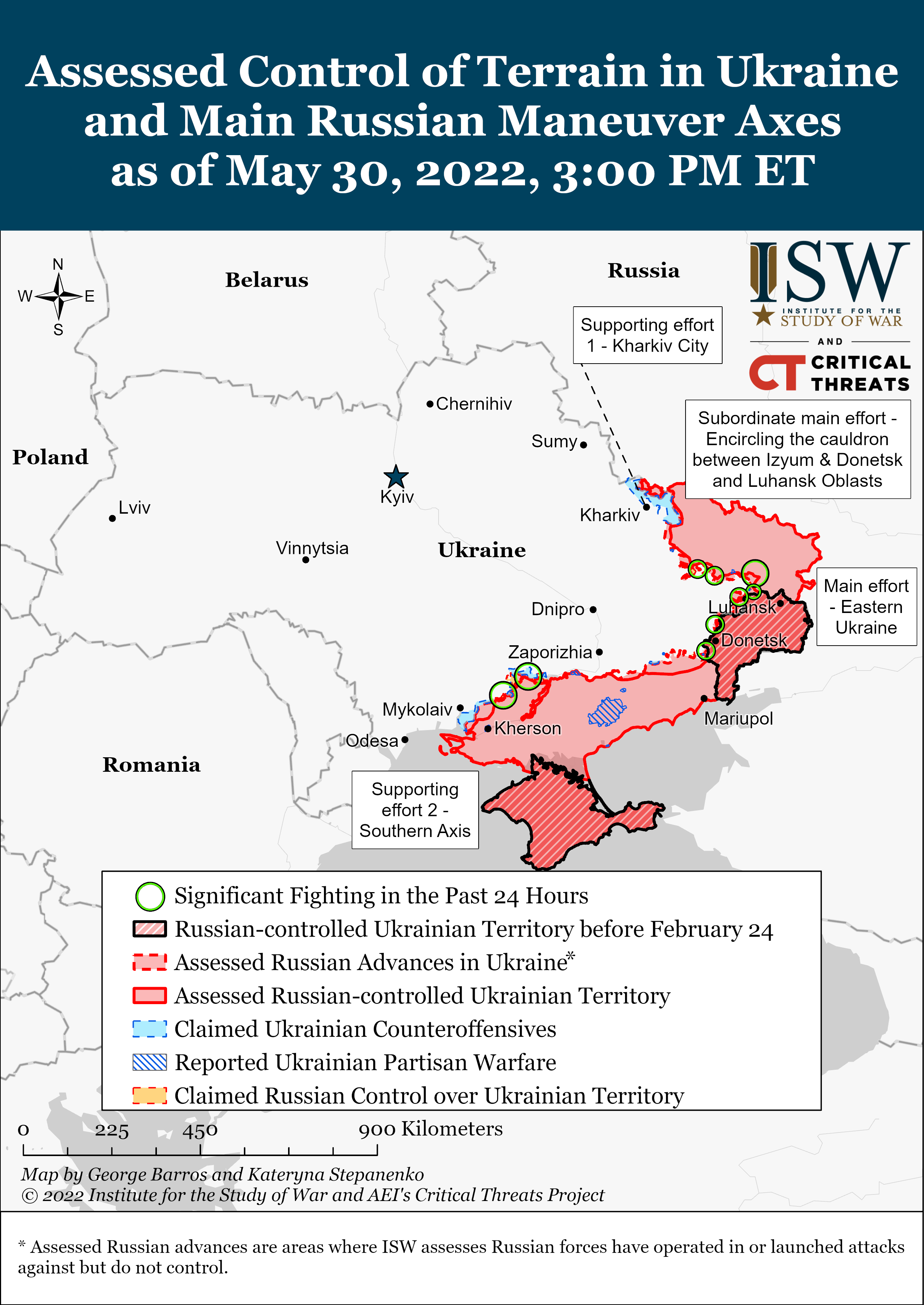 Russian forces focused on regrouping near Izyum to renew offensives towards Slovyansk and Barvinkove on May 30 and conducted only minor, unsuccessful, attacks.[4] Russian troops reportedly conducted an unsuccessful assault on Kurulka, about 30 kilometers south of Izyum.[5] The Ukrainian General Staff noted that Russian forces deployed a squadron of Ka-52 helicopters to the area to provide air defense, and reported Russian troops have moved over 250 units of (unspecified) weaponry and equipment to the area to replenish their force grouping around Izyum.[6] The Ukrainian General Staff also reported that Russian forces have rebuilt a railway bridge near Kupyansk to facilitate the movement of troops and equipment in the area.[7]

The ongoing replenishment of troops in the Izyum area and persistent attempts to advance to the southeast indicates Russian forces are likely reprioritizing attempts to advance towards Slovyansk, though they are increasingly attempting to simultaneously advance from two directions - southeast from Izyum and west from Lyman. Donetsk People’s Republic (DNR) troops claimed to capture Staryi Karavan and Dibrova, both between Lyman and Slovyansk, on May 30.[8] Russian Telegram channels additionally reported fighting in Raihorodok, 6 kilometers northeast of Slovyansk.[9] Russian forces are making incremental advances towards Slovyansk and seek to assault the city itself in the coming weeks. However, Russian advances remain limited and are unlikely to increase in pace in the near term, particularly as Russian forces continue to prioritize assaults on Severodonetsk at the cost of other lines of effort. 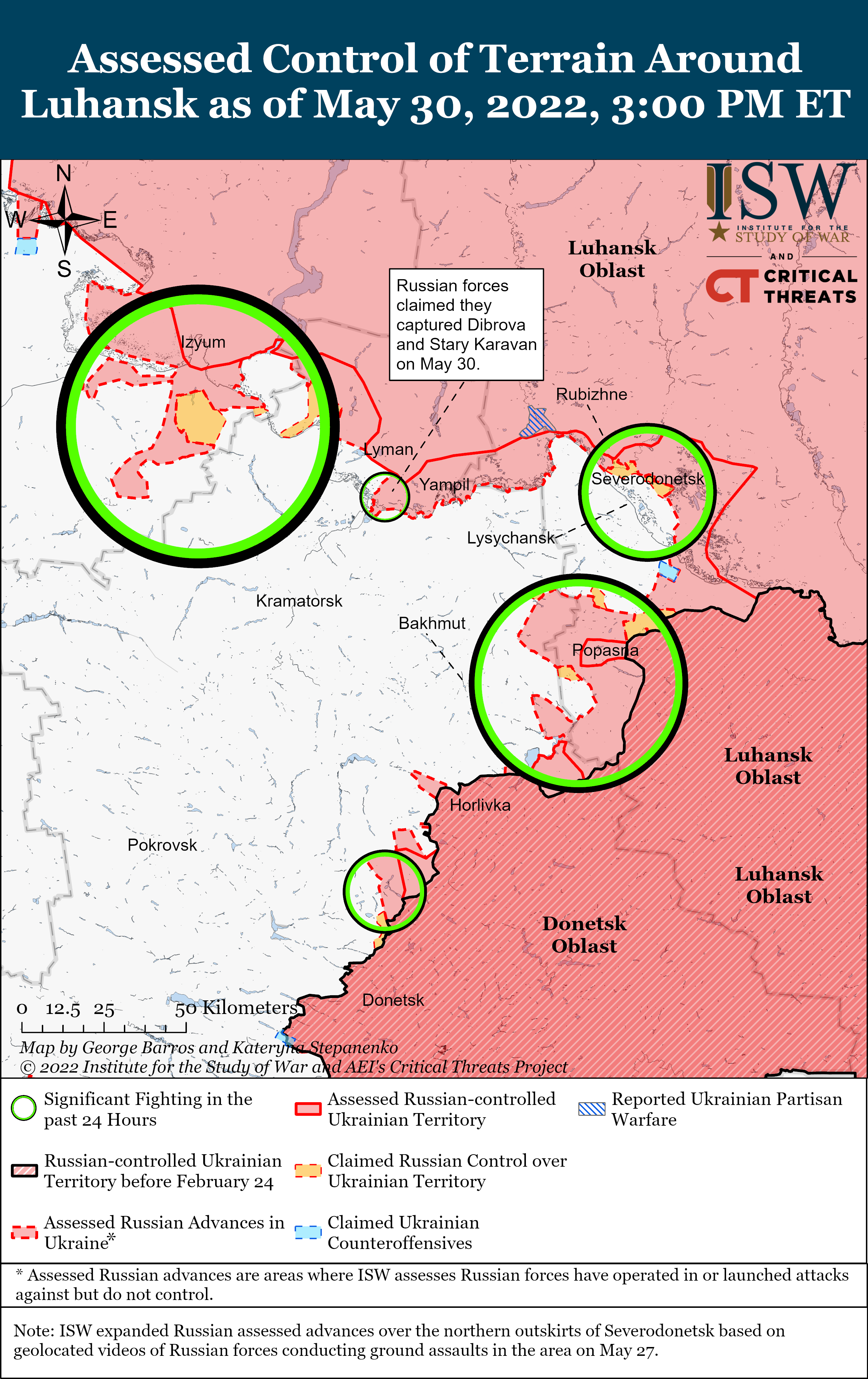 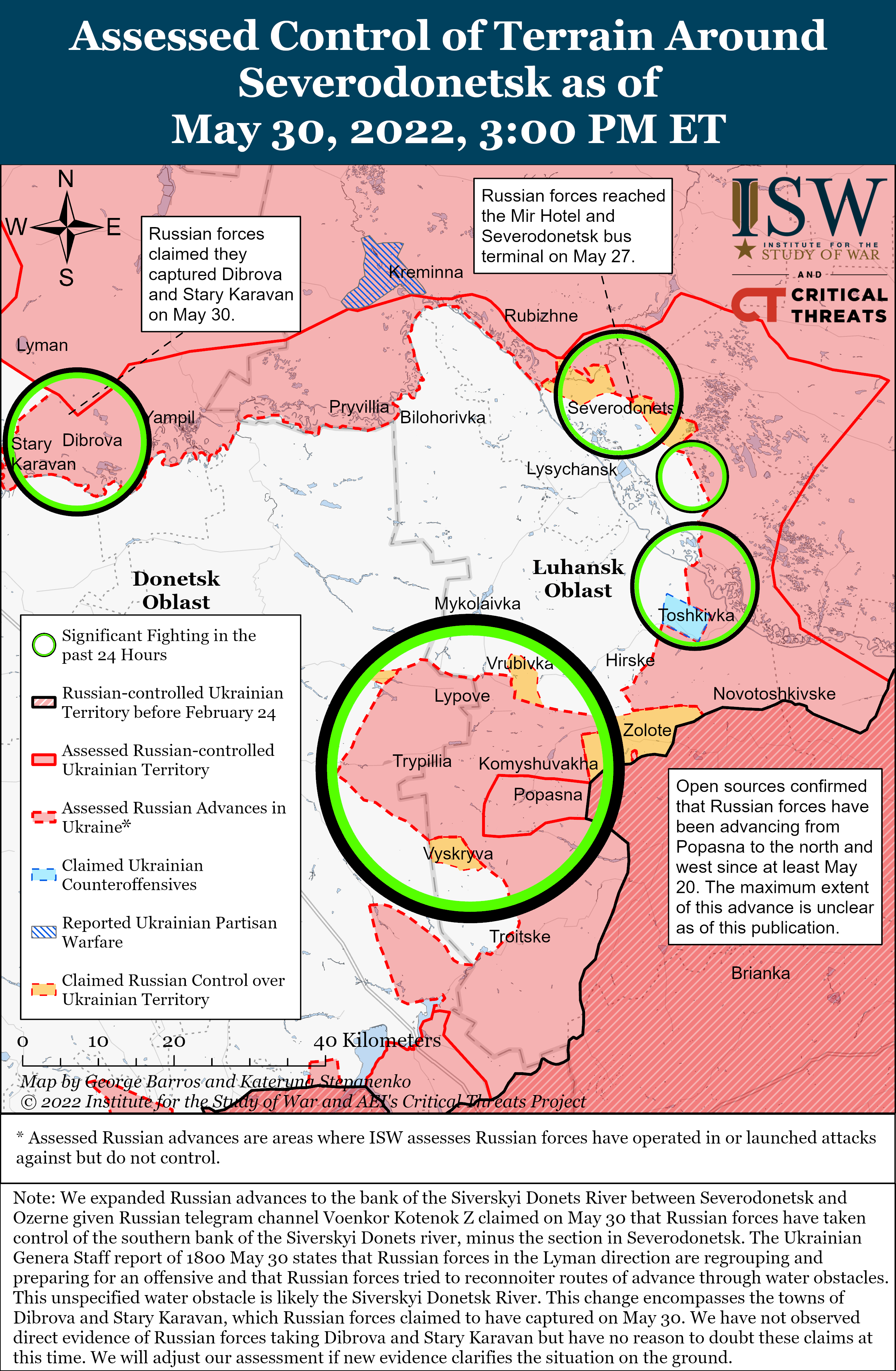 Russian forces fired on Ukrainian positions north of Kharkiv City and did not make any confirmed advances on May 30.[17] Russian forces conducted MLRS and artillery strikes against Odnorobivka, Udy, Ruski Tyshky, Cherkasy Tyshky, Ruska Lozova, Pitomnyk, Borshchova, Peremoha, Tsyrkuny, Shestakove, and the Kyivskyi District of Kharkiv City.[18] The Ukrainian General Staff stated that the goal of these artillery attacks is to deter further Ukrainian advances towards the international border.[19] 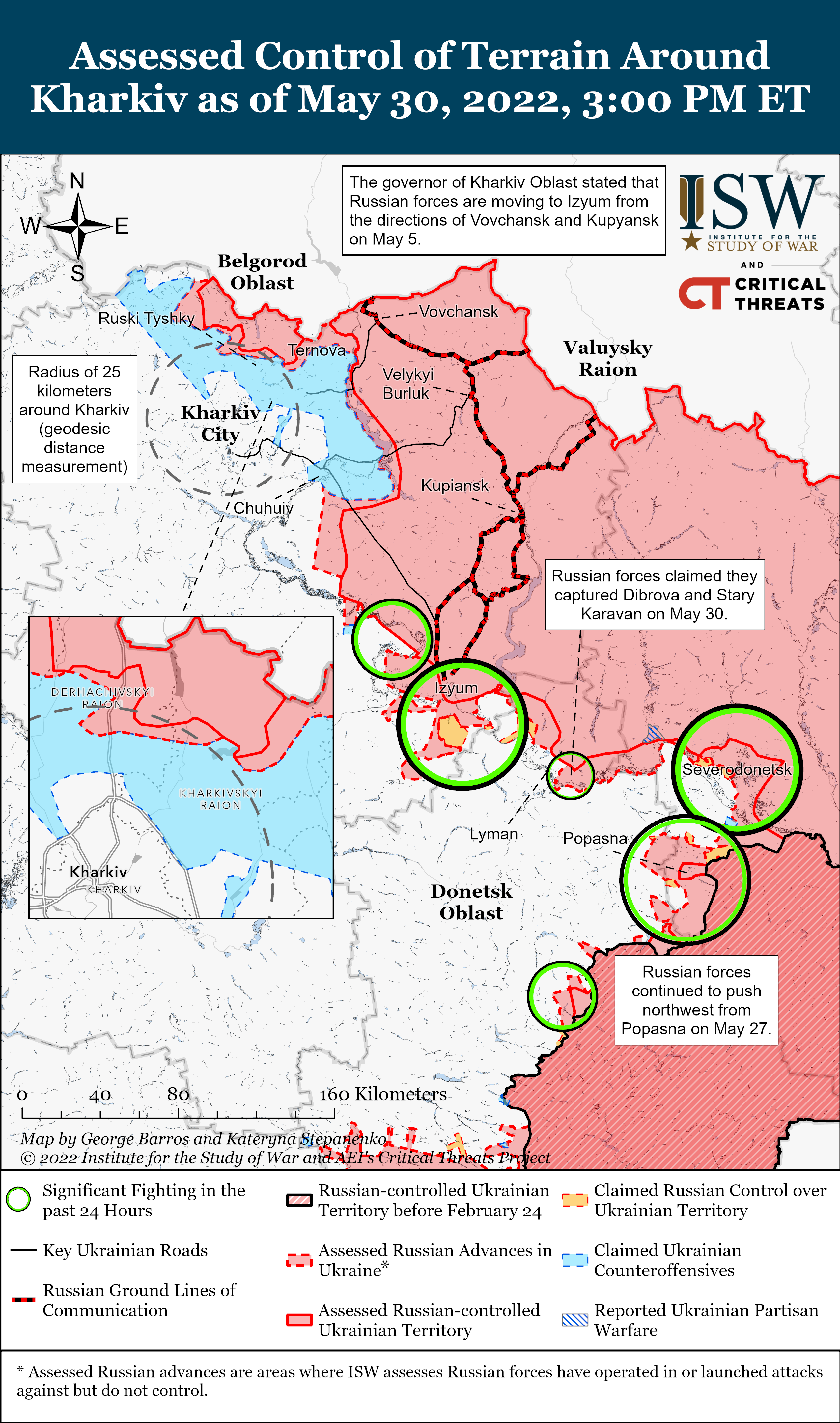 Russian forces conducted artillery strikes against Kherson, Dnipropetrovsk, Mykolaiv, and Dnipropetrovsk Oblasts and a missile strike against a previously-destroyed bridge in Odesa.[23] These sporadic strikes are unlikely to significantly disrupt Ukrainian logistics. The Ukrainian Resistance Center reported that an unidentified partisan detonated an IED in Melitopol near the residence of the Russian-appointed Mayor of Zaporizhia Eugene Balitsky.[24] Partisan activity in occupied territories likely continues to disrupt Russian administrative activities in these areas. 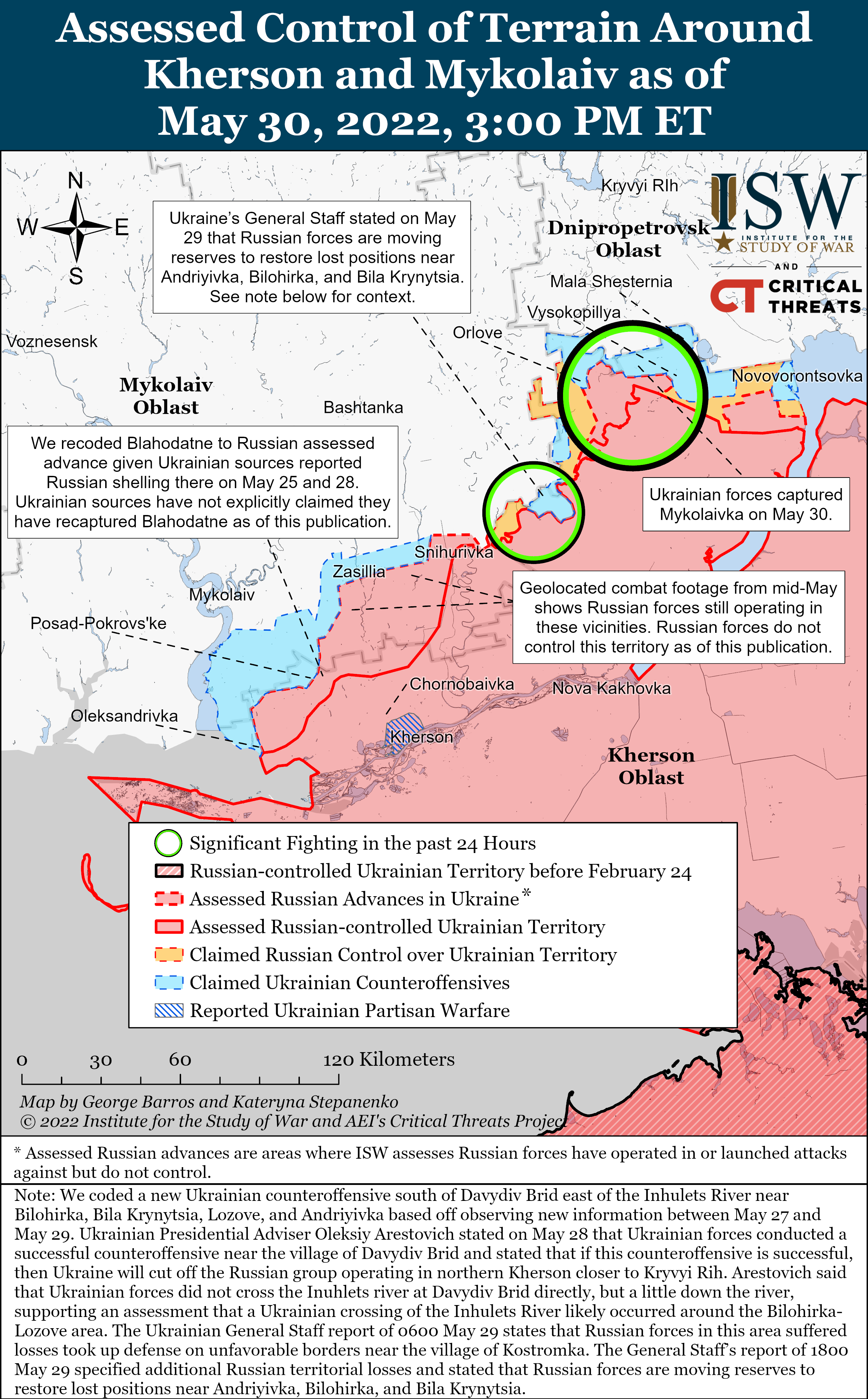 Russian occupation forces continued efforts to exert bureaucratic control in occupied areas but did not make any significant changes on May 30.