Iran plans to send more combat drones and new ballistic missile systems to Russia for use in Ukraine, likely further strengthening Russia’s reliance on Iranian-made weapon systems. The Ukrainian Main Military Intelligence Directorate (GUR) reported on November 1 that Iranian officials intend to send a shipment of more than 200 Shahed-136, Mohajer-6, and Arash-2 combat drones to Russia.[1] The GUR reported that Iran will send Russia the drones in a disassembled state and that Russian personnel will assemble them with Russian markings.[2] CNN reported on November 1 that unnamed officials from a western country that closely monitors Iranian weapons programs stated that Iran plans to send a thousand weapons to Russia by the end of the year, including surface-to-surface short-range ballistic missiles and combat drones.[3] This would be the first confirmed instance of Iran sending Russia advanced precision-guided missiles. Russia likely negotiated the additional Iranian shipment of weapons systems due to the depletion of its stockpile of cruise missile and drone systems over the course of the war in Ukraine, particularly during the Russian campaign against Ukrainian critical infrastructure. The GUR reported that Ukrainian air defenses have shot down more than 300 Shahed-136 drones since Russia starting using them in Ukraine on September 13.[4] Russia will likely continue to use drone attacks and missile strikes against critical infrastructure to try to offset the failures and limitations of its conventional forces on the frontline. Russian dependence on Iranian-made systems, and therefore on Iran, will likely increase.

The Russian Ministry of Defense (MoD) started its semi-annual fall conscription drive on November 1, amidst reports of continuing covert mobilization throughout the country. Russian Defense Minister Sergey Shoigu announced that 2,700 draft committees across 85 federal subjects began the fall conscription call-up of 120,000 men.[5] Shoigu also stated that partial mobilization in Russia concluded. Head of the Main Organizational and Mobilization Directorate of the Russian General Staff, Yevgeniy Burdinsky, reiterated that Russia is conscripting 7,500 fewer men than in previous years and noted that partial mobilization postponed the conscription cycle by one month.[6] Burdinsky claimed that conscripts will not serve in occupied Luhansk, Donetsk, Kherson, or Zaporizhia oblasts this year and will not participate in combat. Head of the 4th Directorate of the Main Organizational and Mobilization Directorate of the Russian General Staff Vladimir Tsimlyansky added that most recruits will deploy to training formations and military units where they will train for five months, while others will receive specializations based on their skills and education level.[7] The Russian MoD has conducted semi-annual conscription call-ups for decades and should be able to execute this process effectively and efficiently.  Any problems with the execution of the fall call-up would likely indicate that partial mobilization and the war in Ukraine have complicated a standard procedure.

Commander of the 8th Combined Arms Army of the Southern Military District (SMD) Lieutenant-General Andrey Mordvichev reportedly replaced Colonel-General Alexander Lapin as commander of the Central Military District (CMD). Several Russian milbloggers—including some who appear on Russian state television—noted that Mordichev has replaced Lapin in this position, but the Russian Ministry of Defense (MoD) has not officially announced Mordichev’s appointment nor Lapin’s dismissal as of November 1.[11] A Russian local outlet citing an unnamed official within the Russian MoD claimed that Mordichev will only replace Lapin as the commander of the “center“ forces in Ukraine for the duration of Lapin’s supposed three-week medical leave.[12] A milblogger who frequently appears on Russian state media claimed that the Commander of the Russian Forces in Ukraine, Army General Sergey Surovikin, personally appointed Mordichev to replace Lapin due to his commitment to objective frontline reporting.[13] If reports of Mordichev’s appointment are true, then the Kremlin may be attempting to appease the pro-war milblogger community that has been demanding transparency and more honest reporting. The milblogger added that Mordichev reportedly has “warm working relations” with Chechen leader Ramzan Kadyrov, and that Kadyrov called Mordichev “the best commander” during their meeting in mid-March.[14] Mordichev’s appointment may therefore indicate that the Kremlin is attempting to appease the siloviki faction—composed of Kadyrov and Wagner Group financier Yevgeniy Prigozhin—that has publicly criticized Lapin as well.[15]  Lapin’s dismissal may have also been Surovikin’s recommendation as well, however, given that both commanders operated in the Luhansk Oblast area to seize Lysychansk and its surroundings in June.[16] ISW cannot independently verify milblogger or Russian local outlet reports at this time.

Wagner Group financier Yevgeniy Prigozhin is likely attempting to address critiques against his parallel military structures following Lapin’s reported dismissal. Prigozhin defended his mercenaries against unspecified “tens of thousands of critics,” stating that his Wagner mercenaries are dying while critics are refusing to go to the frontlines.[17] Prigozhin has been responding to numerous inquiries in recent days regarding Wagner units suffering losses or facing outbreaks of infectious diseases among prisoner recruits, but his attacks against Lapin have prompted some within the pro-war community to publicly question his authority.[18] Many Russian milbloggers who had defended Lapin heavily criticized Prigozhin’s comments about the  Russian higher military command, with one milblogger stating that “shepherds and cooks,” sarcastically referring to Chechen leader Ramzan Kadyrov and Prigozhin, could not assess Lapin’s performance.[19] ISW has also previously noted that Prigozhin’s units have not made significant gains around Bakhmut since June.[20]

Prigozhin is likely attempting to reduce the appearance that he might become too powerful, stating that he has no plans to hold political office and would refuse such a position if offered.[21] Prigozhin also added that he does not consider himself to be a leader of public opinion and does not engage in “showdowns” with Russian officials, despite continuing to publicly attack St. Petersburg Governor Alexander Beglov and repeatedly calling for his resignation.[22] Prigozhin added that he is not competing with Beglov in the St-Petersburg business sphere. 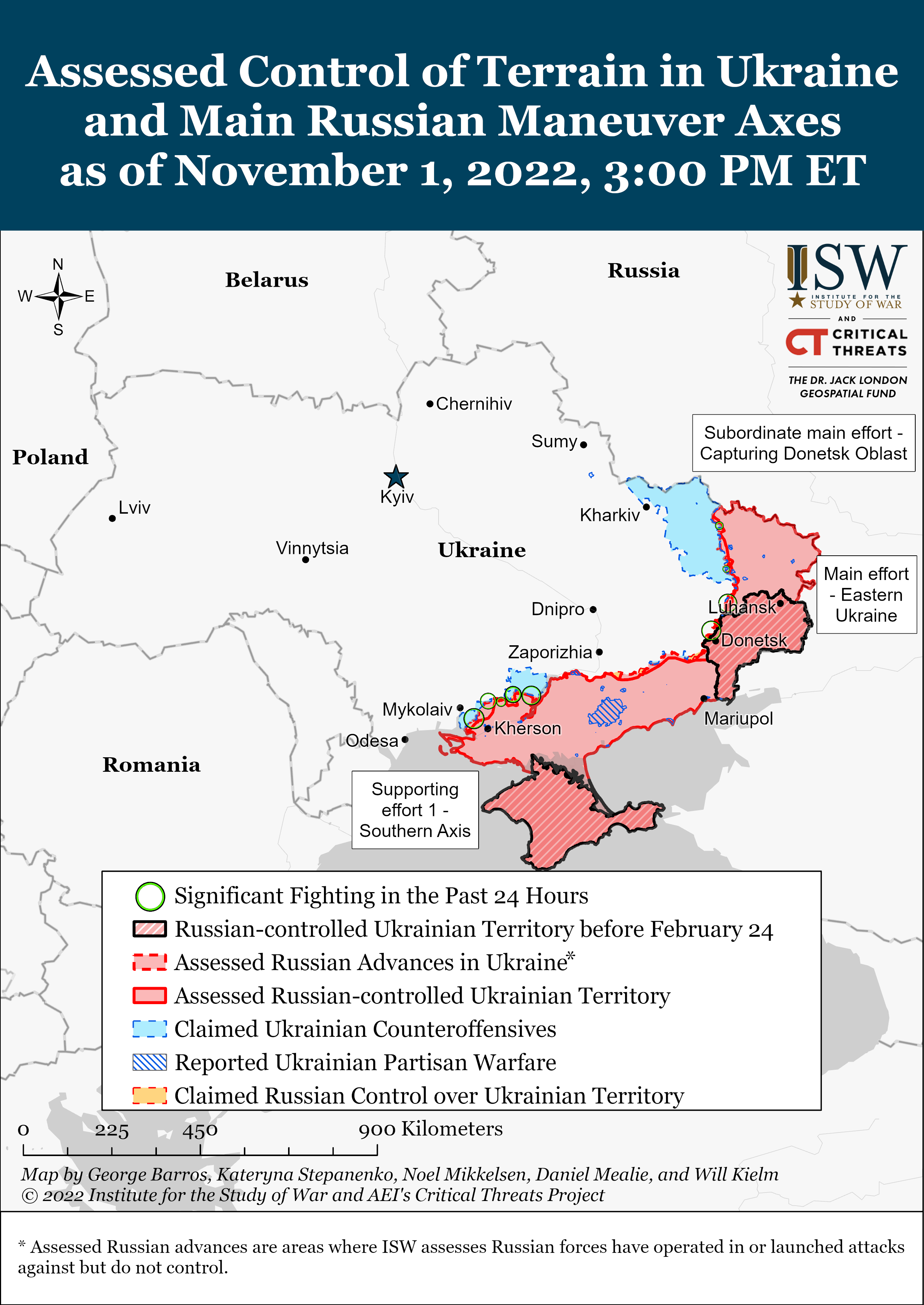 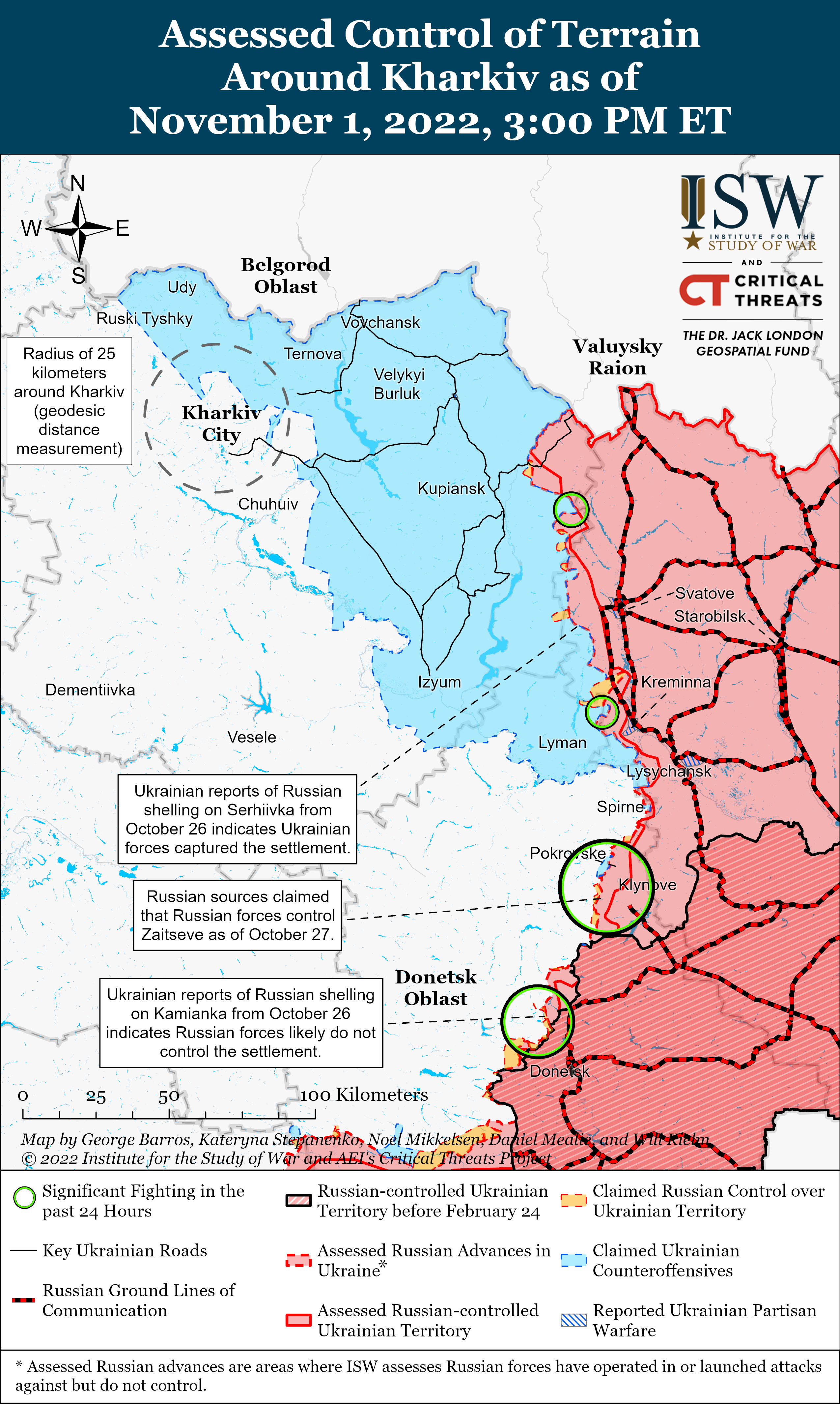 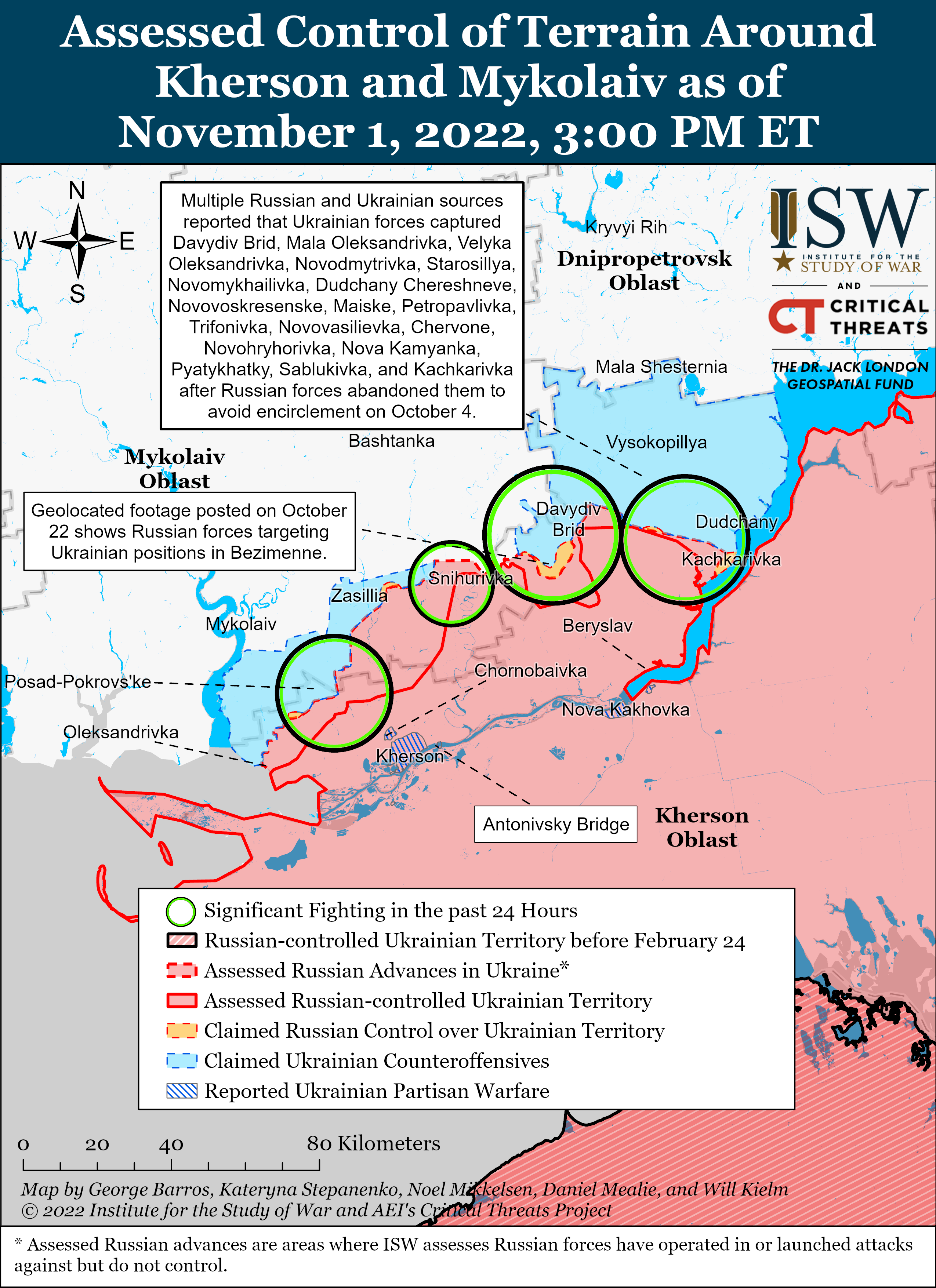 Russian forces continued offensive operations southwest of Donetsk City on November 1. The Ukrainian General Staff reported that Russian troops conducted offensive operations in the Novopavlivka direction (the operational direction used to refer to activity in western Donetsk Oblast) but did not offer further information on where offensive operations occurred.[52] Donetsk People’s Republic (DNR) First Deputy Minister of Information Daniil Bezsonov claimed that fighting intensified in the Vuhledar direction on November 1 and stated that Russian forces are attempting to take Pavlivka (45km southwest of Donetsk City) and Novomykhailivka (25km southwest of Donetsk City) as Ukrainian forces try to hold the left bank of the Kashlyhach River and regroup in the vicinity of Vuhledar.[53] Bezsonov indicated that this offensive is likely intended to encircle the Ukrainian grouping in Vuhledar but noted that seizing Vuhledar will likely be costly for Russian forces.[54] A Russian milblogger claimed that Russian troops already control half of Pavlivka as of October 31 and that there was no significant progress by Russian forces operating around Novomykhailivka.[55] Another Russian miblogger refuted claims that DNR units are fighting in this area and claimed that elements of the 155th Naval Infantry Brigade of the Eastern Military District are operating in the area instead.[56]  Russian forces continued routine artillery fire in western Donetsk and southern Zaporizhia Oblasts.[57]

Ukrainian sources reported on November 1 that a Ukrainian strike destroyed the Akhtamar Hotel along the Mariupol-Donetsk City Road near Volnovakha.[58] Ukrainian Mariupol Mayoral Advisor Petro Andryushchenko claimed that the hotel housed Chechen troops under the command of Ramzan Kadyrov.[59] 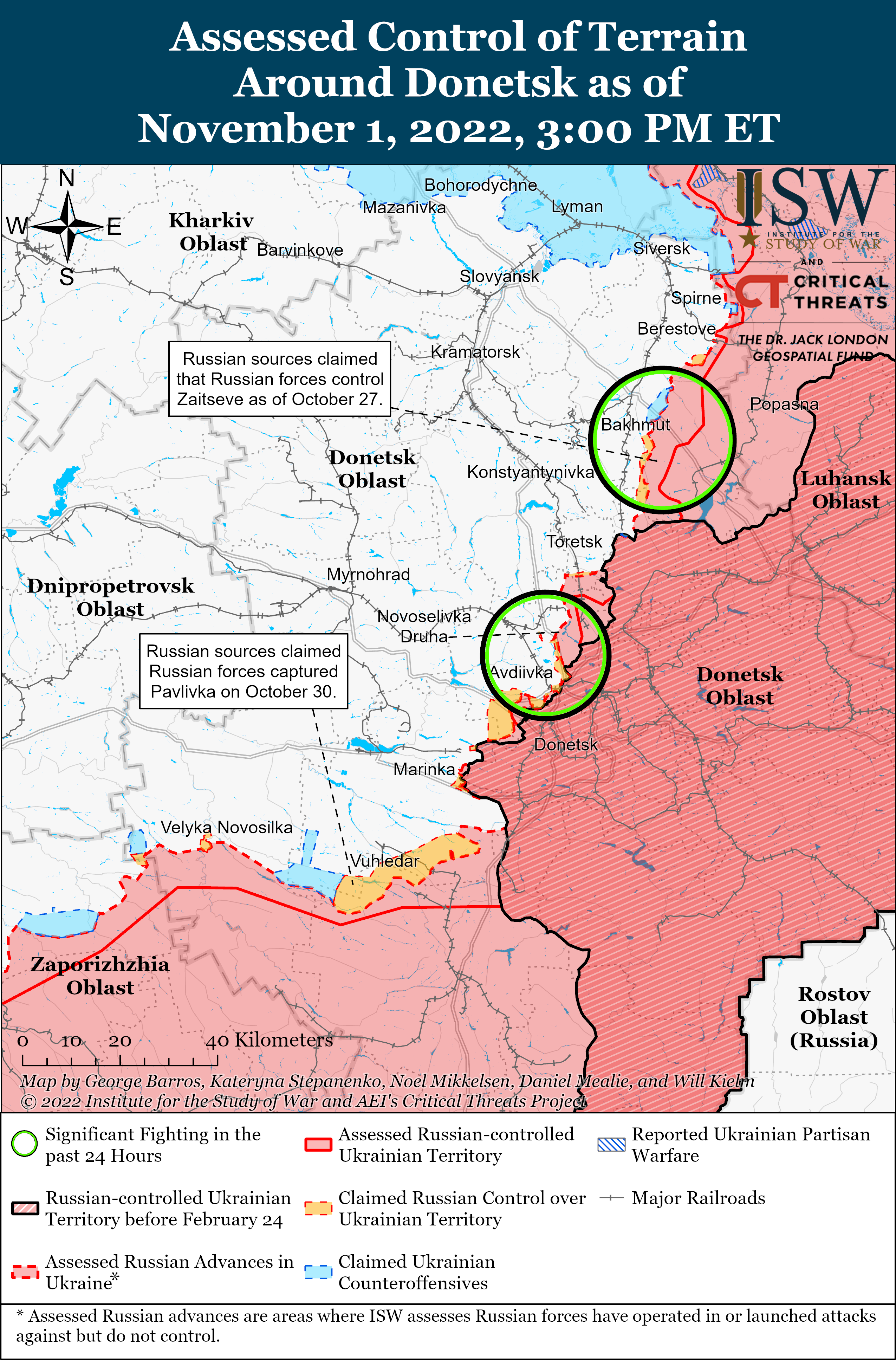 Russian forces continue efforts to consolidate control of the Zaporizhzhia Nuclear Power Plant (ZNPP) amid deteriorating working conditions at the plant. The International Atomic Energy Agency (IAEA) announced on October 31 that a landmine near the ZNPP perimeter detonated on October 30, cutting power to reactor unit 4 and forcing it to rely on external power lines to power essential safety and security functions.[66] IAEA Director-General Rafael Grossi expressed concern on October 31 for the working conditions of ZNPP personnel and stated that Russian occupation authorities continue to pressure ZNPP personnel into signing contracts with Russian nuclear energy agency Rosatom.[67] Ukraine’s Main Intelligence Directorate (GUR) reported on November 1 that Russian occupation authorities established deadlines of November 1 and December 2 for ZNPP personnel to sign contracts with Rosatom and have limited Ukrainian personnel access to the ZNPP.[68] The GUR also reported that Chechen forces arrived at Enerhodar, likely to perform law enforcement duties, and that Russian forces installed equipment on the roof of reactor unit 5 to conduct aerial reconnaissance of the area.[69]

Russian military structures are reportedly expanding certain training capabilities. The Russian Ministry of Defense (MoD) reported on November 1 that Russia is developing “tactical simulator” complexes using various unspecified training aids to reduce the cost of using expensive weapons systems.[70] The Belarusian MoD similarly reported that Belarus and Russia are planning to create joint training centers for the combined training of Russian and Belarusian military personnel.[71] Such measures are ostensibly intended to expand the training and development capabilities of the Russian military, potentially in response to widespread and systemic issues with training mobilized reservists under the partial mobilization order.

The Russian military leadership is likely continuing to struggle with the morale and discipline of mobilized soldiers. Russian sources reported on November 1 that the commander of a military base in Chita, Zabaykalsky Krai, expelled mobilized servicemen from the grounds of the base ahead of Zabaykalsky Krai Governor Alexander Osipov’s visit to the base.[72] Russian sources cited fears that the servicemen would ask Osipov “uncomfortable questions about supplies.”[73] Systemic issues with mobilization structures remain seemingly widespread despite the formal end of partial mobilization.

Chechen leader Ramzan Kadyrov implied that Chechnya will continue to send summonses to serve within Chechen units to men with previous combat experience.[74] Kadyrov highlighted that these men will not serve in the army, but will instead serve “among Chechens,” presumably in internal security forces in the Chechen Republic.  Kadyrov may have again indirectly criticized the Russian Armed Forces by stating that the families of Chechen servicemen will know the locations and units of their loved ones’ deployments, which is not the case for soldiers in the Russian military. Russian outlets have reported that families complained that the Russian MoD did not properly inform them about the deployment of their relatives.[75]