Russian forces in eastern Kherson Oblast are likely partially vulnerable to a Ukrainian interdiction campaign such as the one Ukrainian forces successfully exploited to retake western Kherson Oblast. Several major ground lines of communication (GLOCs) run through eastern Kherson Oblast into other Russian-controlled areas in southern Ukraine: the southern T2202 Nova Kahkovka-Armiansk route, the southeastern P47 Kakovkha-Henichesk route, and the M14 highway that runs eastward into Melitopol, Berdyansk, and Mariupol. Geolocated satellite imagery indicates that Russian troops are establishing defensive positions along some of these critical GLOCs, and social media reporting indicates that Ukrainian strikes have already begun targeting Russian concentration areas and military assets on these routes.[4] The limited number of high-quality roads and railways in this area, particularly connecting Crimea to the mainland, creates potential bottlenecks that could be vulnerable to Ukrainian interdiction efforts that would gradually degrade the Russian ability to continue supplying its grouping in eastern Kherson Oblast and other areas of southern Ukraine. ISW previously reported the targeting of similar bottlenecks along key GLOCS--not just the bridges across the Dnipro River--during Ukraine’s Kherson counteroffensive in late August to mid-October culminated in the Russian withdrawal from the west bank of Kherson Oblast to positions further south of the Dnipro River. Ukrainian forces will likely find it harder to achieve such dramatic effects in eastern Kherson but may be able to disrupt Russian efforts to solidify and hold their new defensive lines.

Russian President Vladimir Putin signed a decree changing the composition of the Russian Presidential Council for Civil Society and Human Rights (HRC) on November 17.[5] The decree notably expels four Russian human rights activists, including Ekaterina Vinokurova, who wrote a piece criticizing the rise of “patriotic” Telegram channels and nationalist milbloggers who have cornered the information space against opposition outlets who deviate from the predominant Kremlin line of the war in Ukraine.[6] Russian media previously reported that Vinokurova and other members of the HRC appealed to the Russian Investigative Committee to look into the widely circulated video of the execution of a former Wagner Group fighter who reportedly defected to Ukraine.[7] Putin’s new appointees to the HRC include a slate of Russian political and proxy members and notably Sasha Kots, a prominent milblogger and war correspondent who has been heavily involved in covering Russian operations in Ukraine.[8] Kots most recently called for Russia to maintain massive missile strikes against critical Ukrainian infrastructure on November 17.[9] This decree likely represents the Kremlin’s wider effort to stifle domestic civil opposition by continuing to platform prominent voices in the information space that propagate the Kremlin’s line on the war in Ukraine. 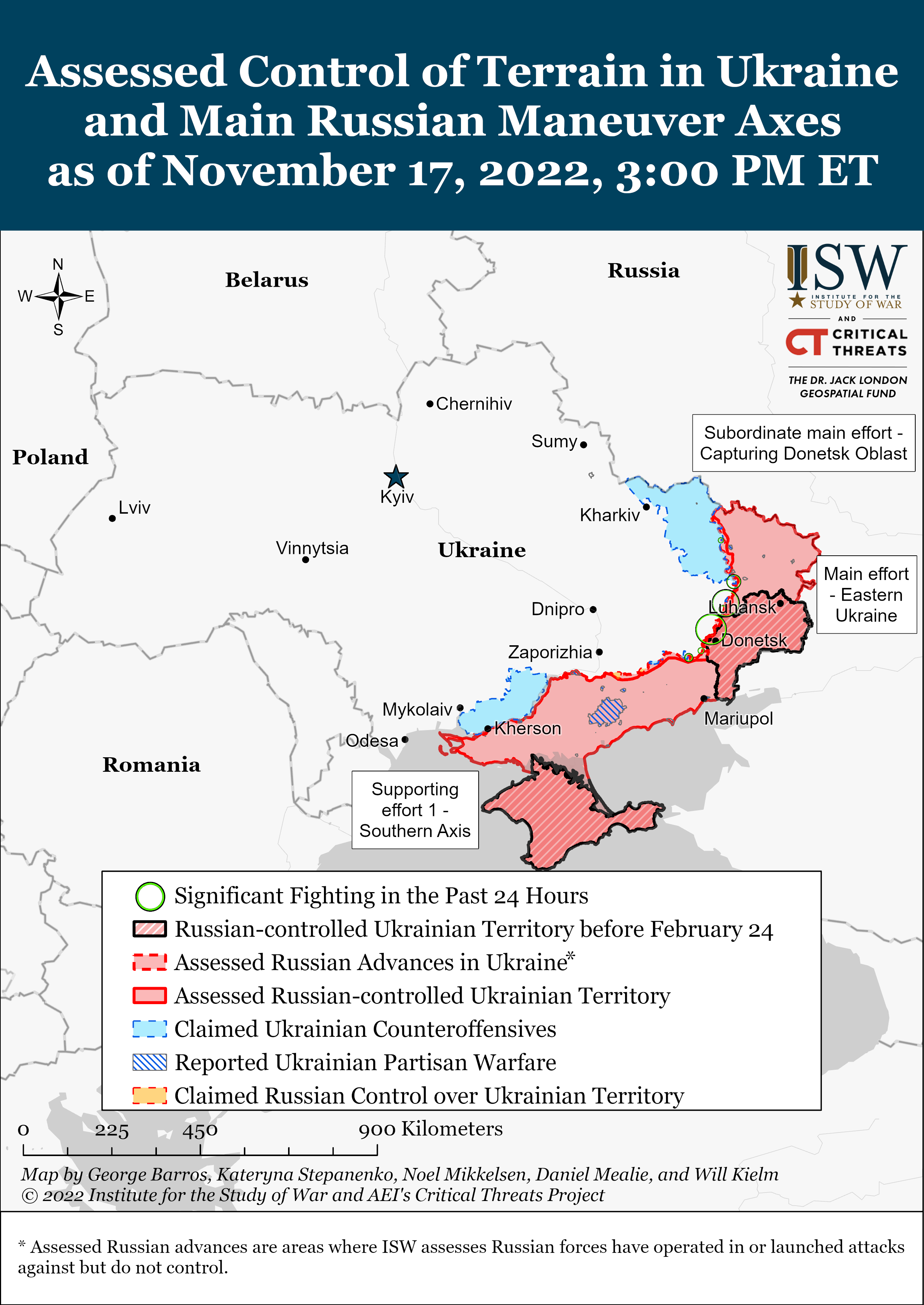 Russian forces continued to prioritize offensive operations in Donetsk Oblast on November 17. Ukrainian Deputy Chief of the Main Operational Directorate, Brigadier General Oleksiy Hromov, stated that the most difficult situation is in eastern Ukraine, where Russian forces are attempting to cross the administrative border of Donetsk Oblast.[17] Hromov stated that there have been 500 combat clashes between Ukrainian and Russian forces in Donetsk Oblast within the last week alone.[18] ISW has previously reported that the Russian military is likely trying to use mobilized personnel and troops who were previously deployed on the west bank of Kherson Oblast to revitalize the Donetsk offensive but will likely continue to fail to achieve operationally significant gains.[19]

Russian forces continued offensive operations around Bakhmut on November 17. The Ukrainian General Staff reported that Ukrainian Forces repelled Russian assaults within 34km northeast of Bakhmut near Verkhnokamianske and Soledar.[20]  A Russian milblogger claimed that Russian forces also attacked Vesele and Bilhorivka to cut the road in the Soledar area.[21] Another Russian milblogger claimed that Wagner Group formations southeast of Bakhmut retain control over Vesela Dolyna, Odradivka, the western outskirts of Opytne, and the southeastern outskirts of Bakhmut.[22]

Russian forces continued to conduct defensive operations on the east (left) bank of Kherson Oblast on November 17. Ukraine’s Southern Operational Command reported that Russian forces are attempting to secure safe supply lines on the east bank and withdrawing further into the rear of Kherson Oblast to avoid Ukrainian fire damage.[31] Deputy Chief of the Main Operational Directorate of the Ukrainian General Staff Brigadier General Oleksiy Hromov noted that Ukrainian control of the west (right) bank of the Dnipro River allows Ukrainian troops to control territory near the occupied Crimean Peninsula (presumably by fire, since Ukrainian forces are not yet operating on the east bank of the river), and that Ukrainian troops are continuing to target Russian positions on the east bank at maximum range.[32]

Russian authorities are continuing force-generation efforts across occupied Ukrainian territory and the Russian Federation. The Ukrainian General Staff reported that Russian officials are preparing a draft law that provides for the legalization of conscription for military service for Ukrainian citizens in the temporarily occupied territories who possess a Russian passport from the spring of 2023.[44] The Ukrainian General Staff also reported that Russian forces recruited about 650 prisoners from correctional institutions in the Russian Federation during the previous week and sent them for training in Rostov Oblast.[45] A Russian source reported that the military registration and enlistment offices in the Khanty-Mansi Autonomous Okrug will continue issuing summonses to all persons liable for military service, allegedly to verify information on eligibility for service.[46] The Russian Ministry of Defense (MoD) continues to share videos of conscripted soldiers being called up for service in Murmansk Oblast, Khabarovsk Krai,  Saint Petersburg, Sevastopol, and Stavropol Krai as well as training in Stavropol and Chelyabinsk Oblast.[47]

Russian authorities continue to face discontented mobilized personnel and low morale on the front lines. A Russian source reported that mobilized soldiers from Novosibirsk Oblast wrote reports stating that they received insufficient training and therefore refused to fight without further training.[50] Ukrainian Deputy Minister of Defense Hanna Malyar stated in a briefing that Russian forces are experiencing an increase in panic and declining morale as a result of successful Ukrainian counteroffensive operations.[51] Malyar stated that Russian forces are engaging in mass abuse of alcohol and in some cases, committing self-mutilation to leave the front lines. Details continue to emerge about holding cells for deserting mobilized Russian personnel in the Luhansk and Donetsk oblasts, with one source identifying eight such cells across the regions.[52]

Russian occupation officials and forces continued to intensify filtration measures and restrictions on movement in Russian-occupied territories in Ukraine on November 17. The Ukrainian General Staff reported that Russian occupation officials and forces are increasing filtration measures in Rubizhne, Luhansk Oblast as well as in the Kakhovka raion in Kherson Oblast.[58] The Ukrainian General Staff also reported that Russian forces have instituted restrictions on movement in Rubizhne from the directions of Kreminna and Varvarivka in Luhansk Oblast.[59] A Russian source reported that Kherson Oblast occupation head Vladimir Saldo signed a decree on November 15 instituting a new network of checkpoints in Russian-occupied Kherson Oblast to prevent the ”export” of special equipment and trucks from the Oblast.[60] Russian occupation officials and forces will likely continue to intensify filtration measures and restrictions on movement as the Ukrainian counteroffensive progresses.

Russian occupation officials continued to coerce residents of occupied areas of Ukraine into supporting the Russian war effort Zaporizhia Oblast occupation head Yevgeny Balitsky stated on November 17 that residents of occupied areas are receiving a full range of social support measures for donating blood.[61] Balitsky stated that his administration intends to offer 736-ruble ($12) payments to popularize blood donations.[62] The Ukrainian Resistance Center reported on November 17 that many companies in Russian-occupied Donetsk Oblast have received a plan with a designated number of employees who must donate blood, indicating that the blood donation measures may not be voluntary.[63] Russian occupation officials are likely pursuing some level of a coercive blood donation scheme to aid a substantial number of wounded Russian military personnel in occupied territories and address the Russian military’s likely shortage of blood supplies.