Wagner Group financier Yevgeny Prigozhin seeks to obfuscate his efforts to strengthen his independent power base with an appeal to the concept of Russia’s historic unity. Prigozhin provided a vague response to a media inquiry regarding his recent visit to Kursk Oblast on Russia’s Unity Day (November 4), during which he had indirectly implied that Wagner forces are involved in upholding Russia’s unity.[1] Prigozhin stated that Russian people, businesses, government, and army need to come together to fight for Russia’s sovereignty and its great future while deflecting from the journalist’s question regarding Prigozhin’s reported meeting with Kursk businessmen about the organization of an unspecified people’s militia – outside of formal Russian military command structures. Prigozhin also noted that Russia has all the ingredients to achieve its goals including a strong president, cohesive army, and great nationhood, which he concluded with an out-of-place greeting from Wagner fighters. Prigozhin later claimed in a follow up media response that his “independence” does not contradict Russian President Vladimir Putin’s politics as some audiences have interpreted.[2]

Prigozhin’s rather sarcastic statements have several underlying implications for his perception of his power within Russia. ISW previously reported that Kursk Oblast officials announced the construction of second and third lines of defenses in the region, and if Prigozhin’s meeting with local businessmen took place, may indicate that he is attempting to expand his influence in the region.[3] Prigozhin’s comment on Russia’s “cohesive army” next to Putin was likely thinly-veiled sarcasm, given that Prigozhin has repeatedly criticized the Russian Armed Forces on numerous occasions.[4] Prigozhin also directly recognized that he is an independent entity, which as ISW previously assessed, relieves him of some obligations to the Kremlin and the Russian Ministry of Defense (MoD).[5] Putin’s dependency on Prigozhin’s forces around Bakhmut also allows Prigozhin privileges such as voicing his criticisms of the Kremlin or the Russian Armed Forces without significant ramifications. Prigozhin has also coincidentally opened his Wagner Center in St. Petersburg on Russia’s Unity Day.[6] However, Prigozhin is notably shielding his efforts to build an independent power base and shape the conduct of Russia’s invasion of Ukraine with language focused on Russian Unity – likely both to appeal to Russian nationalists and civilians and to deflect criticism of his fairly overt efforts to build an independent power base.

Prigozhin continues to rely on ineffective convicts to staff his forces. Prigozhin declined to comment on a reporter’s question regarding ongoing recruitment drives at Krasnoyarsk Krai penal colonies, despite previously openly discussing prisoner participation in the war with Russian outlets like RiaFan.[7] Russian opposition outlet The Insider, however, found that over 500 prisoners recruited into Wagner units have died in the past two months.[8] The publication added that Wagner lost between 800 and 1,000 mercenaries in Ukraine, indicating convicts comprise a large proportion of Wagner’s forces in Ukraine. Ukrainian intelligence officials also previously reported that many prisoners suffering from infectious diseases infected Wagner troops, to which Prigozhin responded that he does not discriminate on the basis of illness.[9]

Iranian Foreign Minister Hossein Amir-Abdollahian confirmed that Iran sent Russia combat drones. Amir-Abdollahian stated on November 5 that Iran “gave a limited number of drones to Russia months before” the war in Ukraine.[10] Amir-Abdollahian also claimed that if Ukrainian officials could prove that the Russian military has used Iranian-made drones in Ukraine then Iranian officials would “not be indifferent” to the concern - falsely and ridiculously implying that Russia has not used the drones that he admitted Iran has provided.[11] Iran’s confirmation of the drone shipments further supports ISW’s previous assessments that Russia is sourcing Iranian-made weapons systems to address the depletion of its high-precision munitions arsenal.[12] ISW previously assessed that Iran is likely already exploiting Russian reliance on these Iranian-made weapons systems to request Russian assistance with its nuclear program.[13] The nuclear assistance requests and the recognition of the drone shipments are both indicators that Iranian officials may intend to more clearly establish an explicit bilateral security relationship with Russia in which they are more equal partners.

Former Donetsk People’s Republic (DNR) Security Minister and current DNR military commander Aleksandr Khodakovsky claimed on November 5 that Russian friendly fire may have caused up to 60% of total Russian losses since the end of Russian offensive operations in Mariupol in mid-May.[14] Even if this statistic is exaggerated, the fact that a Russian commander is publicly speculating on such a damning indicator of Russian and proxy competency indicates the deep challenges Russian forces face. Friendly fire typically does account for a limited number of losses in war but ordinarily nowhere near 60% of total casualties, which demonstrates a lack of communication and command and control coordination between Russian forces. Russian and Ukrainian sources also reported that a Russian rotation returning to its base near Pavlivka, Donetsk Oblast on November 5 drove into a ditch constructed by army subcontractors without prior discussion or warning, further demonstrating a widespread lack of cross-training and coordination between Russian troops.[15] The frequent replacement of Russian military leaders, promotion of inexperienced soldiers, and cobbled-together Russian force composition including Russian contract soldiers, Russian mobilized soldiers, DNR and Luhansk People’s Republic (LNR) forces, and Wagner Group forces exacerbate the fragmented nature of the Russian chain of command and ineffectiveness of Russian forces and likely contributes to frequent friendly fire incidents. 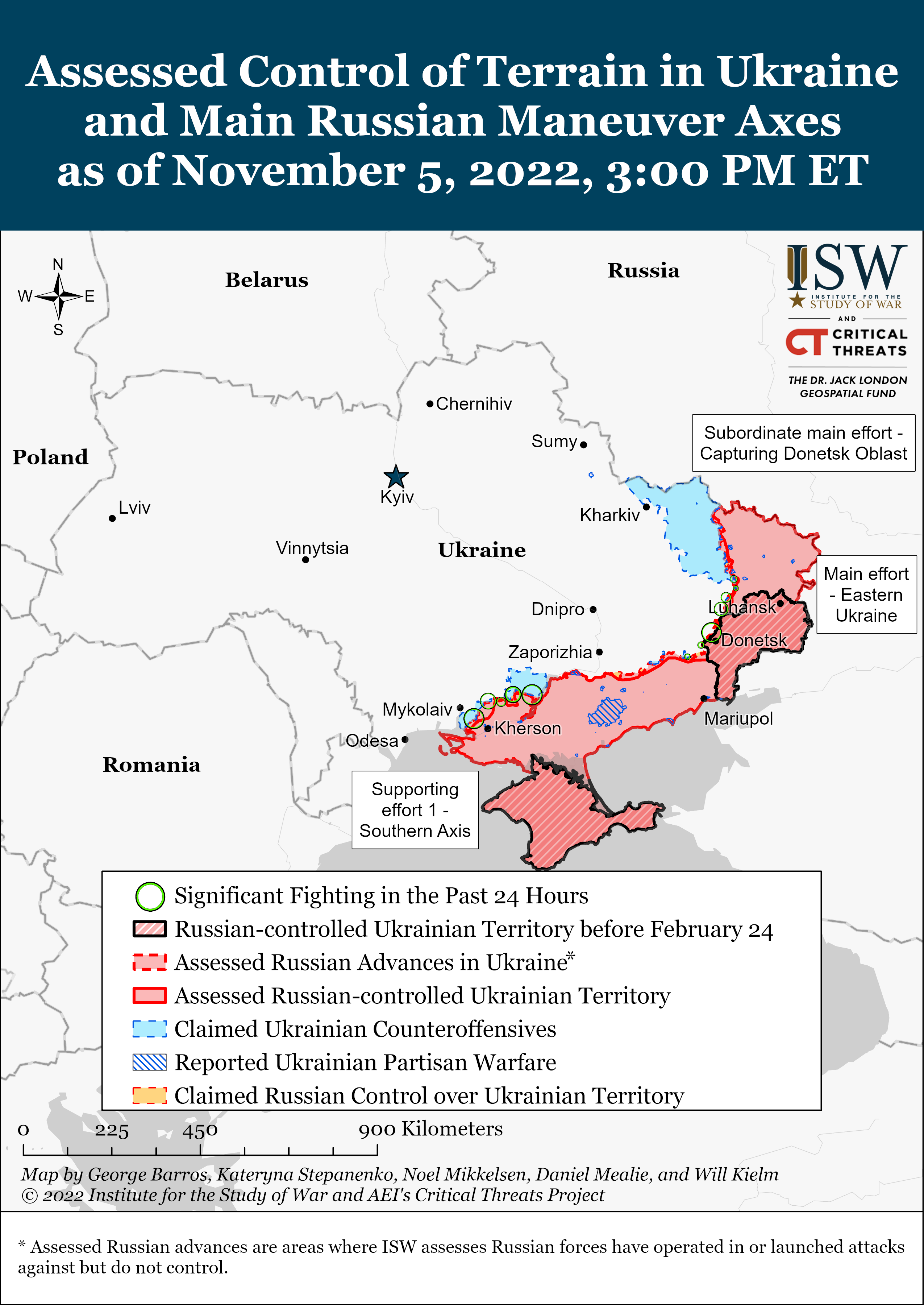 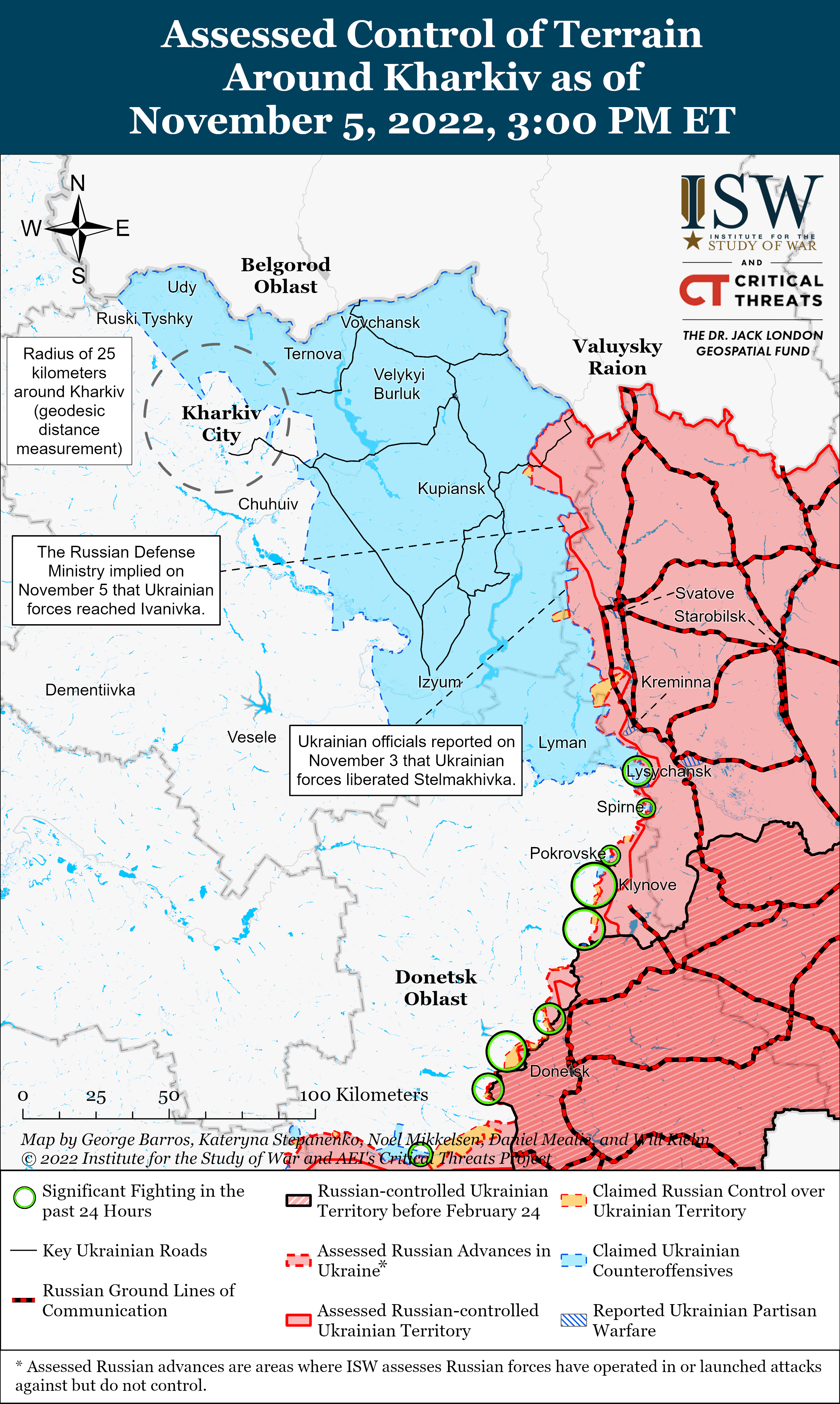 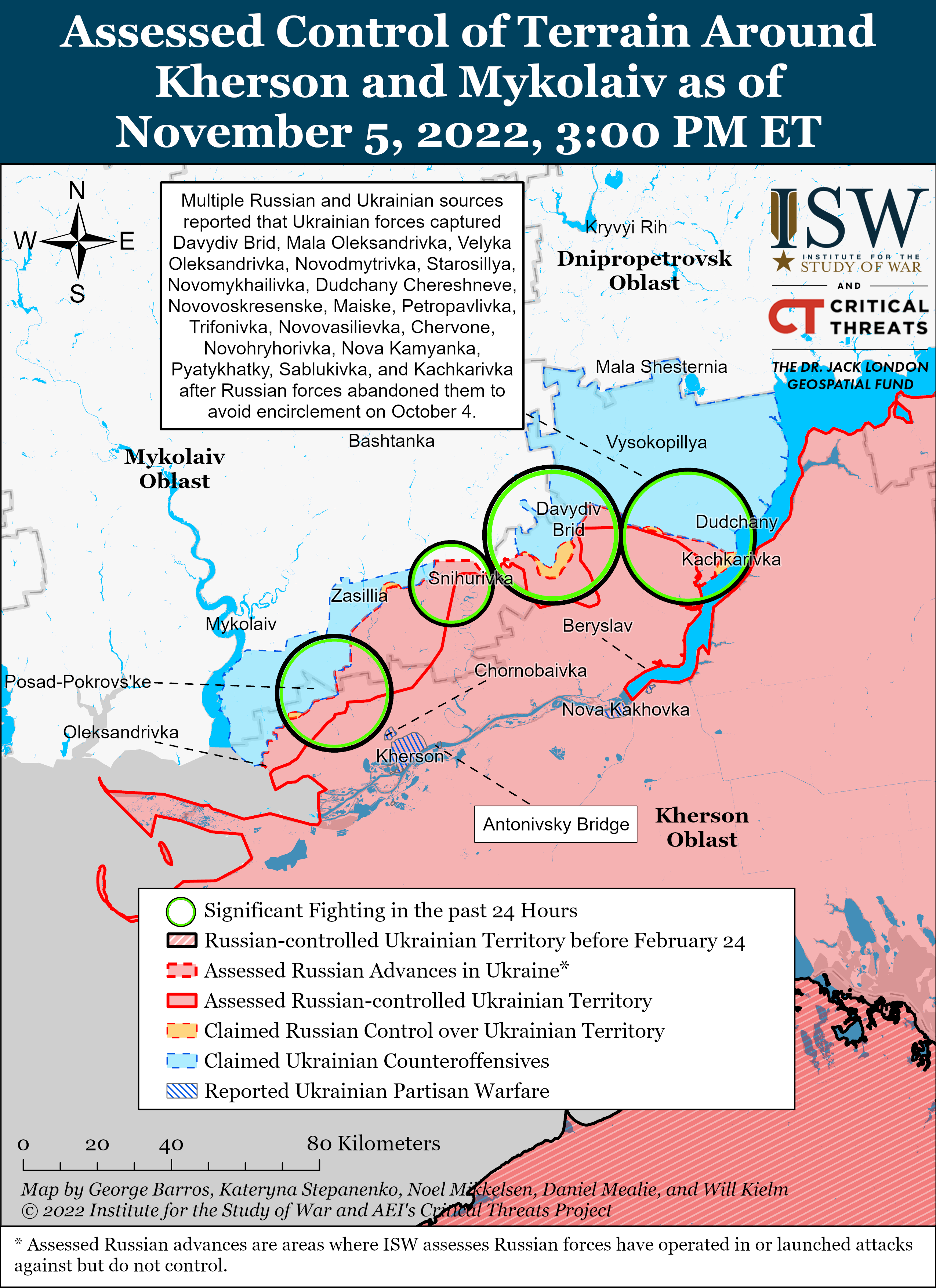 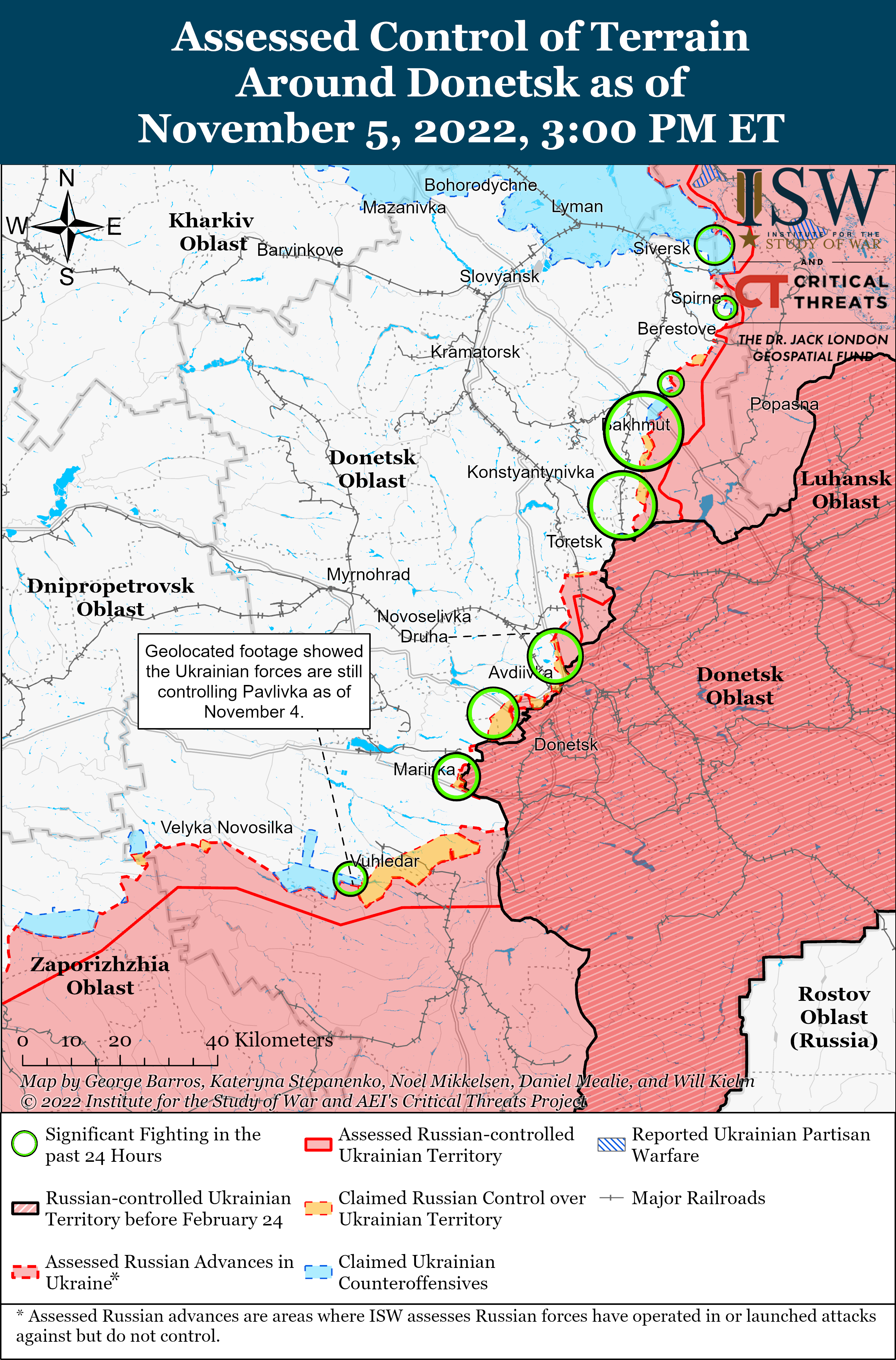 Russia forces continued offensive operations in western Donetsk Oblast on November 5. The Ukrainian General Staff reported that Ukrainian forces repelled a Russian assault on Pavlivka (52km southwest of Donetsk City).[49] Geolocated footage shows Ukrainian forces still control Pavlivka as of November 4.[50] A Russian milblogger claimed that Pavlivka is of great tactical importance because there is a road interchange in the settlement and the surrounding rear areas are rocky terrain that makes vehicle maneuvers more difficult.[51] The Ukrainian General Staff reported on November 5 that Russian forces continued routine indirect fire along the line of contact in Donetsk Oblast.[52]

Continued poor conditions for mobilized soldiers are catalyzing general unrest and a large-scale protest at a mobilization collection point in Kazan on November 4. One social media user posted that almost 2,000 soldiers participated in the protest, though ISW cannot independently confirm the size of the crowd.[57] Video posted by news agencies and to social media shows mobilized forces threatening violence and chanting slurs at a reported colonel after demanding that he explain the lack of provision of basic necessities including food, water, and heat.[58] A Tatarstan government news agency published an article on November 5 claiming authorities had resolved the relevant issues.[59] However, Russian authorities are highly unlikely to be able to fix such issues and halt the resulting protests in the near future. Russian and Ukrainian sources provided continued reports of a lack of medical care, shelter, heating, and equipment for mobilized soldiers on November 4 and 5.[60] ISW has reported on a series of protests due to under-provisioning for Russian mobilized soldiers.[61]

Social tensions caused by a lack of material support for, or financial commitment to, mobilized soldiers are likely pressuring Russian regional heads to increase payments to mobilized recruits and their families. Oryol Oblast Governor Andrey Klychkov and Nizhny Novgorod Oblast Governor Gleb Nikitkin announced on November 3 and November 4 that mobilized residents and their families will receive additional payments of 50,000 rubles on top of mandated federal payments.[64] These actions align with Russian President Vladimir Putin’s November 4 promise of a one-time payment of 195,000 rubles (about $3,150) to mobilized men and new contract soldiers.[65] New payments will also increase the already heavy burden of mobilization on regional budgets.

Unknown actors reportedly conducted an assassination attempt against Donetsk People’s Republic (DNR) Supreme Court Judge Aleksandr Nikulin on November 4. The DNR Ministry of Internal Affairs stated that they are working to identify suspects who attacked Nikulin in Vuhlehirsk, Russian-occupied Donetsk Oblast.[67] Nikulin notably sentenced UK citizens Aiden Aislin and Sean Pinner and Moroccan citizen Brahim Saadoun to death in June on charges of mercenarism after the Russian capture of the Azovstal Steel Plant.[68] It is still unclear if the attack was partisan in nature or the result of in-fighting between internal DNR factions.

Russian occupation officials continue to drive the “evacuation” and forced relocation of residents of Kherson Oblast. Head of the Ukrainian “Kherson Hub” headquarters Roman Golovnya stated on November 5 that since the beginning of the war, over 80% of Kherson City’s residents have left the city.[69] Russian sources continue to perpetuate information operations regarding Ukrainian strikes on civilian infrastructure in Kherson Oblast to continue to manipulate evacuation efforts.[70] Russian officials also continue efforts to deport Ukrainian children under the guise of ”vacation” schemes, and Russian media reported that children from Kakhovka, Kherson Oblast, are remaining at vacation camps in Yevpatoria, Russian-occupied Crimea.[71]