ISW is publishing an abbreviated campaign update today, October 30. This report forecasts that Russia will continue to conduct conventional military operations well into 2023 rather than escalating to the use of tactical nuclear weapons or scaling back its objectives in pursuit of some off-ramp. It considers the timelines of Russian force generation and deployment, of weather effects, and of Moscow’s efforts to freeze Europe into surrender. It includes a summary of battlefield activities that will be described in more detail in tomorrow’s update.

Russian President Vladimir Putin will most likely try to continue conventional military operations in Ukraine to hold currently occupied territories, gain new ground, and set conditions for the collapse of Western support for Ukraine that he likely expects to occur this winter. Putin has likely not abandoned hopes of achieving his maximalist aims in Ukraine through conventional military means, which he is pursuing in parallel with efforts to break Ukraine’s will to fight and the West’s will to continue supporting Kyiv.[1] Putin is unlikely to escalate to the use of tactical nuclear weapons barring the sudden collapse of the Russian military permitting Ukrainian forces to make uncontrolled advances throughout the theater.[2] Such a situation is possible but unlikely. Putin is extraordinarily unlikely to seek direct military conflict with NATO. Putin is very likely to continue to hint at the possibility of Russian tactical nuclear use and attacks on NATO, however, as parts of his effort to break Western will to continue supporting Ukraine.

This forecast rests on two assessments. First, that Putin is setting conditions to continue throwing poorly prepared Russian troops directly into the fighting in Ukraine for the foreseeable future rather than pausing operations to reconstitute effective military forces. Second, that Putin’s theory of victory relies on using the harsh winter to break Europe’s will. These assessments offer a series of timelines that support the forecast.

Russian force-generation efforts will occur over the course of several predictable time periods. Putin has declared that the “partial mobilization” of reservists is complete.[3] That declaration means that, in principle, the Russian military will stop calling up reservists and instead focus on completing their brief training periods before sending them to fight in Ukraine. ISW previously assessed that most of the remaining called-up reservists will arrive in the theater of war over the next few weeks.[4]

Russian Defense Minister Sergey Shoigu announced that continued reserve mobilization efforts will take the form of renewed efforts to recruit “volunteers,” likely into volunteer battalions—efforts that were largely shelved during the “partial mobilization.”[5] Russia will likely struggle to fill out new “volunteer” units rapidly following the reserve call-ups and the flight of hundreds of thousands of Russians who feared those call-ups. Continued attempts to create “volunteer” units will thus likely generate little meaningful combat power and will be spread over an extended period of time.

The Russian military will begin its semi-annual conscription call-up a month later than usual on November 1, 2022. Russia’s conscription cycle offers a set of predictable timelines. Normal Russian conscript training involves a period of roughly six months of individual basic and advanced training followed by the assignment of conscripts to combat units in which they complete their remaining six months of mandatory service.[6] Russian law bans sending conscripts to combat operations abroad with fewer than four months of training, although it specifies that conditions of war or martial law allow the Russian military to deploy conscripts to fight earlier than that. Putin has declared martial law states of varying degrees of urgency throughout the Russian Federation and could use that declaration to trigger the exemption from the mandatory training period.[7] The annexation of four Ukrainian oblasts offers another possible basis for exemption, because Russian law does not preclude the use of conscripts in Russian territory regardless of how much training they have received.[8]

Raw conscripts with no military experience and fewer than four months of training are likely to be nearly useless on the battlefield in any case. Putin may rush limited numbers of such conscripts to combat before their four-month training period is complete, but most will likely be held back until March 2023 at the earliest.

The Russian military will likely find it necessary to send these conscripts to units in Ukraine at the end of their six-month period of initial training in any case, however, as there are unlikely to be enough functional combat units at home stations in Russia to receive them. The Russian military has fully committed its available ground forces units to Ukraine in a series of force-generation efforts, as ISW has previously reported.[9] The partial mobilization and volunteer battalion recruitment efforts are further evidence that the Russian military has no remaining uncommitted ground forces to send. The Russian military likely will be unable to keep called-up conscripts in training areas for more than six months, however, because the next semi-annual conscription call-up would normally begin around April 1, 2023. Conscripts called up beginning on November 1, 2022, will thus likely be assigned to combat and support units in Ukraine and begin to arrive on the battlefield around May 2023.

The Russian Defense Ministry will not likely be able to conduct additional reserve call-ups as long as it is engaged in providing conscripts with initial training. The next window for a large-scale reserve mobilization would thus likely be not earlier than March 1.

The combination of the just-completed partial reserve mobilization and the annual conscription cycle thus creates two likely waves of Russian troops flowing into Ukraine—one moving in over the next few weeks, and the other starting to flow in spring 2023.

Weather offers another likely periodization of Russian efforts that coincides well with the force-generation timelines discussed above. Fall in Ukraine is generally wet and muddy but not usually so bad as to make mechanized offensives impossible. Winter, on the other hand, is usually the best season for mechanized warfare in Ukraine. Ukrainian land is among the most fertile on earth in part because of the dense network of rivers and streams that irrigate it. That network also breaks up the land and can inhibit mechanized advances by canalizing them along roads (although both Russian and Ukrainian troops are, in principle, trained and equipped to operate on this terrain in any season, Ukrainian troops have been far more successful, in general, in doing so.) When the ground freezes hard, however, most of the streams and some of the rivers also freeze, greatly facilitating cross-country mechanized advances. Spring is the nightmare season for fighting in Ukraine. The thaw swells rivers and streams and turns fields into seas of mud. Mechanized warfare in the spring muddy season is extremely difficult (although, again, not impossible for forces like Ukraine’s and, theoretically, Russia’s, that are properly equipped and trained for it).

The Russian partial mobilization is thus flowing forces into Ukraine now in a way that is likely meant to stiffen Russian defenses and allow Russian forces to hold their positions against expected Ukrainian counter-offensive operations through the rest of the fall and into the dangerous winter period. If Putin intends to deploy Russian boys about to be conscripted after four or six months of training, he could be setting conditions for Russian forces to resume offensive operations after the end of the spring thaw.

The Russian partial mobilization of reservists just completed strongly suggests that Putin intends to keep fighting into 2023 rather than expecting to secure some sort of ceasefire or to escalate in a way that could end the war on his terms. He has paid a very high domestic price for this mobilization effort in the flight of hundreds of thousands of Russians to other countries, unprecedented protests, and equally unprecedented criticisms of the performance of the Russian military and the Russian government.[10] This price makes sense if Putin intends to keep fighting and recognizes the need to get reinforcements to Ukraine right now in order to hold his positions long enough for fresh conscripts to arrive and turn the tide in his favor, as he might think. It makes far less sense if he intends to escalate to the use of tactical nuclear weapons either in an effort to win the war or in hopes of securing a ceasefire or some other off-ramp on favorable terms. It could make sense as part of a non-escalatory effort to pursue negotiations for some off-ramp had Putin not accompanied his announcement of the end of partial mobilization with repetitions of his maximalist claims regarding the illegitimacy of the Ukrainian state and the artificiality of the Ukrainian ethnos that are incompatible with serious negotiations.

Putin’s efforts to break Europe’s will by withholding Russian energy supplies over the winter offers yet another timeline that coheres well with the others. The theory underlying this Russian effort would be that freezing European populations will put such pressure on their governments that European states will begin to accept Putin’s demands to stop providing weapons and other forms of support to Ukraine, at least, and possibly to lift various sanctions on Russia as well. This theory will not really be falsifiable until well into 2023, however. European governments have ostentatiously prepared their populations for a difficult winter, stocked up as best they can on energy supplies, and set conditions to reduce energy usage even at significant economic cost. These actions signal that European leaders are ready for the kinds of pressures they are likely to encounter early in the cold season. Putin can hope that they will not be able to withstand those pressures all through the winter, but the validity of that hope will not be clear until the coldest weather has had a chance to build them. This timeline thus also coincides with the likely availability of the next wave of Russian forces in spring 2023—Putin will have been able to observe the effect of winter on European will and choose whether to commit his conscripts or pursue some other course of action.

These timelines are likely more significant in shaping Putin’s thoughts and decisions than in shaping effects on the ground. Roughly one-third of the mobilized reservists have already arrived in Ukraine, according to Putin, and they have made relatively little difference on the battlefield.[11] The UK Ministry of Defense noted that they are reinforcing combat units that were in some cases effectively destroyed—reduced to 10 percent of their normal complements.[12] The arrival of hastily mobilized and untrained reservists into such units will not render them combat effective. The deployment of raw conscripts after four or six months of training in 2023 will likely have similarly nugatory effects on the battlefield. But Putin does not appear to recognize these facts and seems rather to expect the reserves called up at such surprising cost to make a real difference.

Putin is thus setting conditions to continue waging conventional war for the foreseeable future rather than preparing to try to end the war by escalation or by making for some “off-ramp.” He could always change his mind, to be sure. But Ukraine and the West should be operating on the assumption that Ukraine will continue to have many months in which to regain control of strategically vital terrain, for which it will also continue to require continued large-scale Western support.

On the battlefield, Ukrainian forces conducted further offensive operations in northeastern Ukraine, and Russian forces continued to set conditions for a withdrawal from Kherson. Those developments are summarized briefly and will be covered in more detail tomorrow. 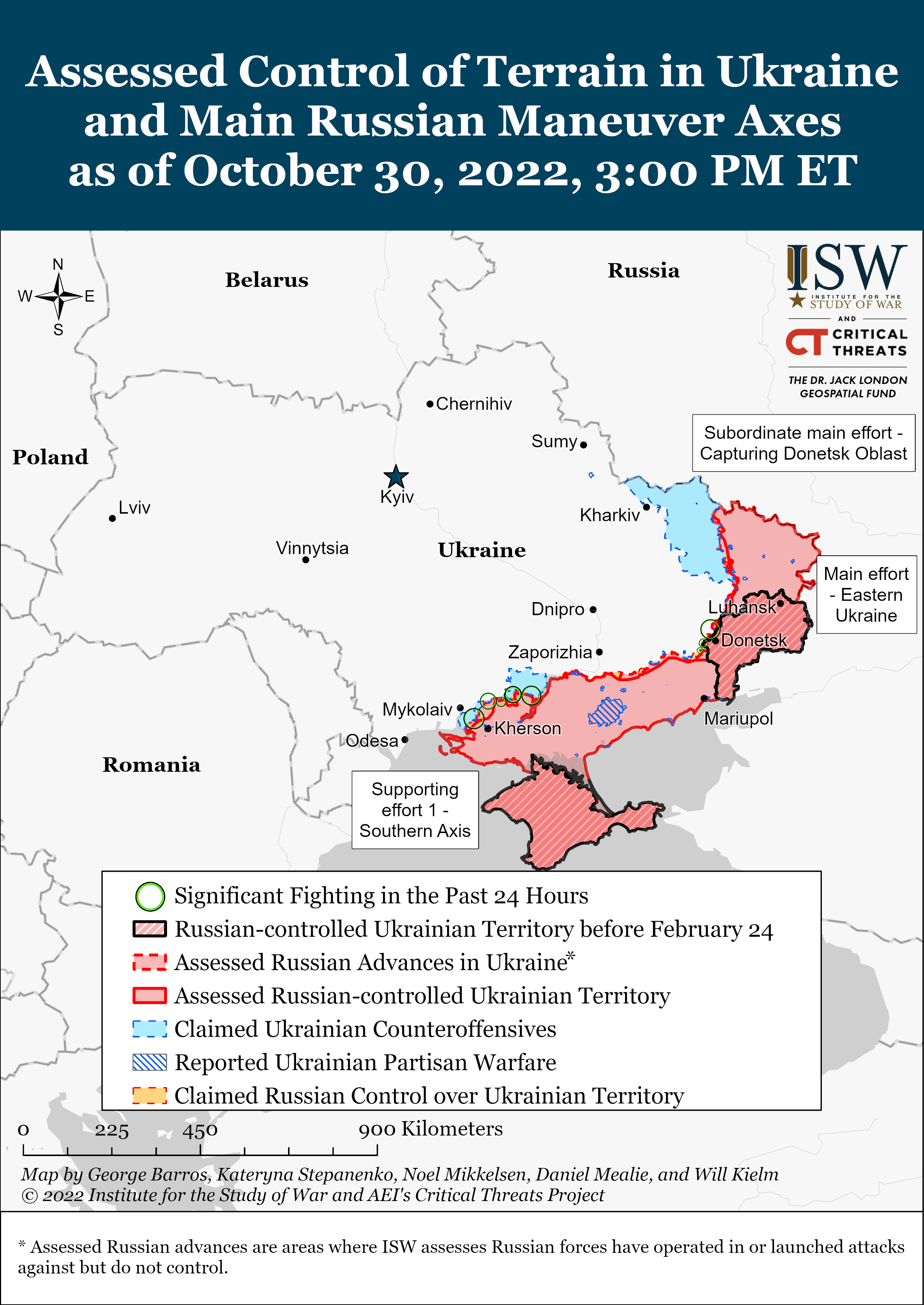 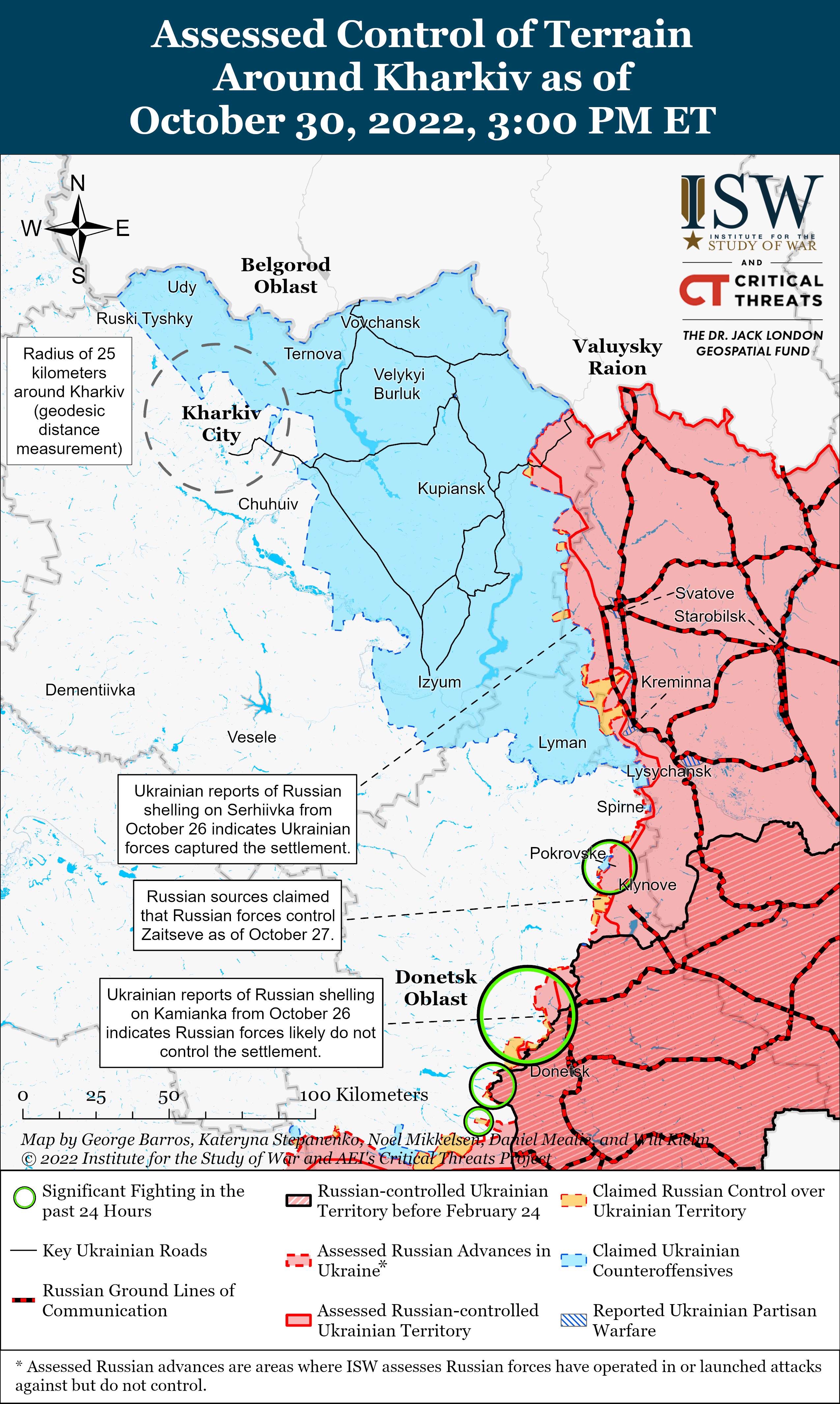 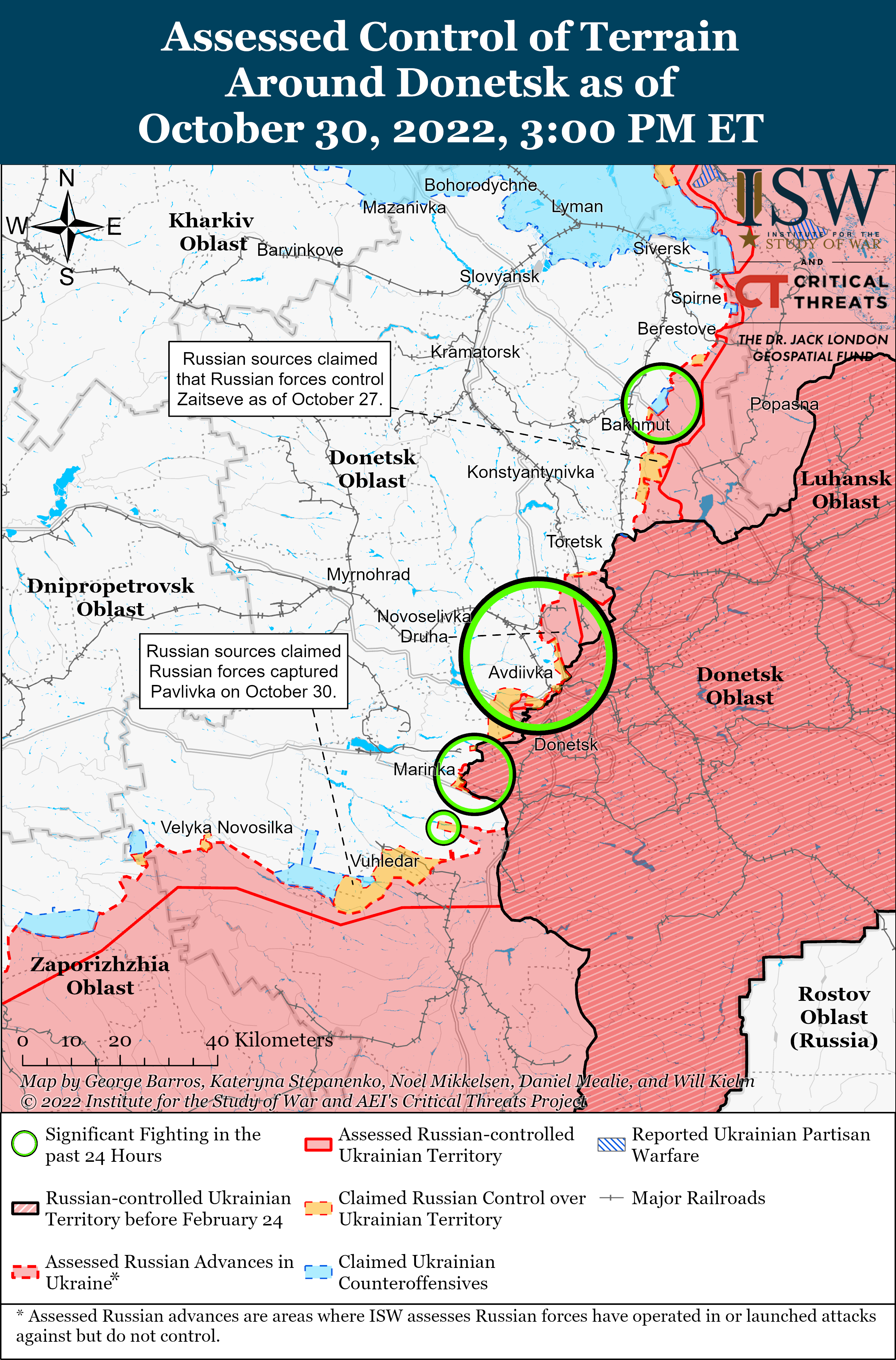 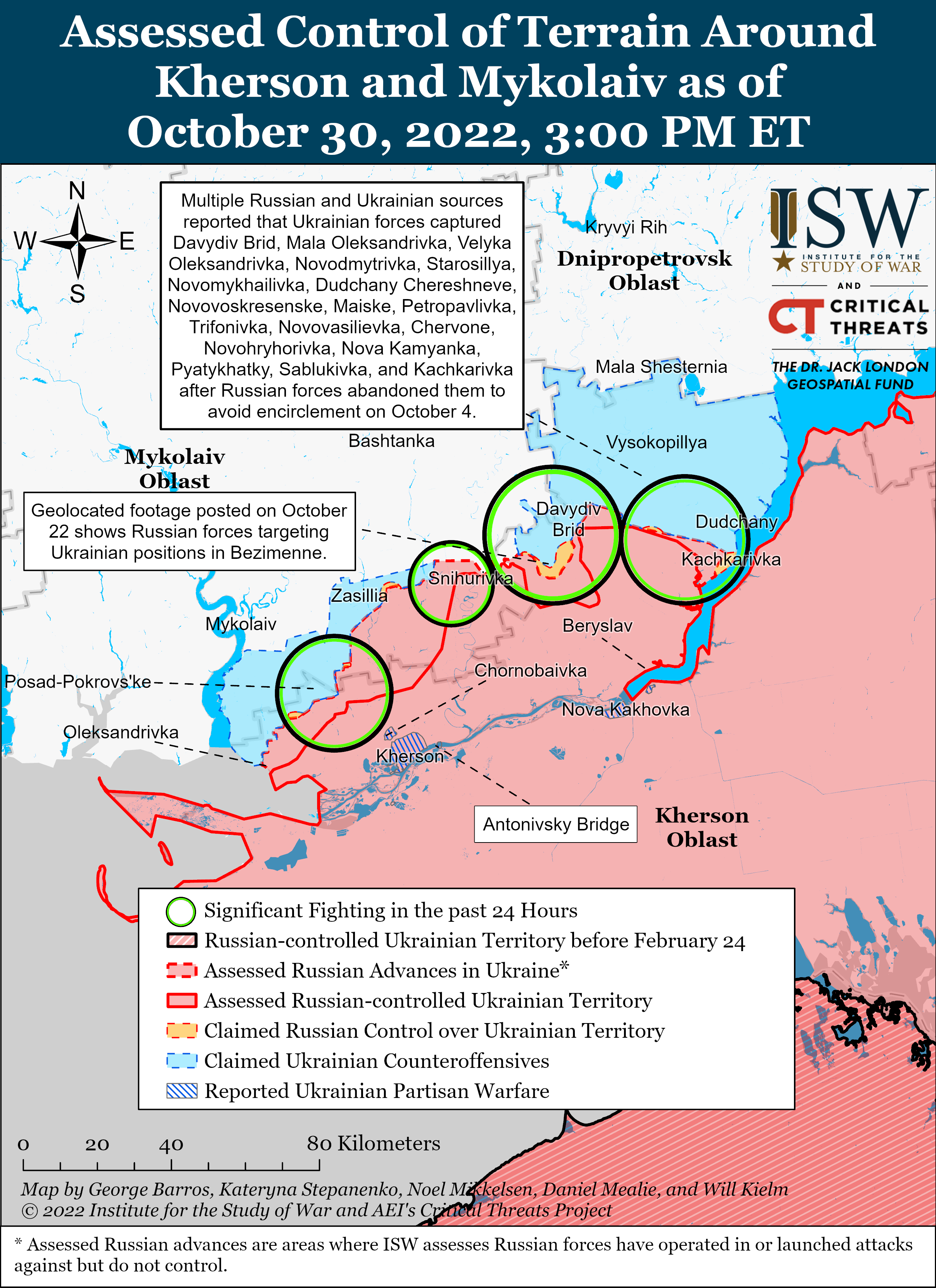