Wagner Group financier Yevgeny Prigozhin is being established as the face of the Russian “special military operation” in Ukraine. Prigozhin gave a recruitment speech on September 14 announcing that Russian prisoners have been participating in the war since July 1 when they were instrumental in seizing the Vuhlehirska Thermal Power Plant.[1] A Russian milblogger noted that Prigozhin is introducing a “Stalinist” method that allows the Kremlin to avoid ordering a general mobilization that could ignite social tensions in Russian society.[2] Milbloggers have been consistently praising Prigozhin’s success in Ukraine and some even said that he should replace the Russian Defense Minister Sergey Shoigu, whom milbloggers and Kremlin pundits blame for the Russian defeat around Kharkiv Oblast.[3] Russian military correspondent and milblogger Maksim Fomin (alias Vladlen Tatarsky) claimed to have spoken to Prigozhin about the situation on the Ukrainian-Russian border after the withdrawal of Russian forces in the area.[4] The Prigozhin-Fomin meeting, if it occurred, could indicate that the Kremlin is attempting to address milbloggers’ months-long complaints that the Russian Defense Ministry did not hear their criticism highlighting the ineffectiveness of Russian higher command. Prigozhin is Putin’s close confidant, and his developing relationship with milbloggers may help retain milblogger support for the Kremlin’s war effort while scapegoating Shoigu and the Russian Defense Ministry for the defeat around Kharkiv Oblast. ISW previously assessed that the Kremlin has changed its information approach to address the demands of the Russian milbloggers and nationalists’, suggesting that Putin seeks to win back the critical milblogger community alienated by Russian failures.[5]

Russian forces likely targeted Ukrainian hydrotechnical infrastructure in western Dnipropetrovsk Oblast on September 14 to interfere with Ukrainian operations across the Inhulets River. Ukrainian sources reported that eight Russian cruise missiles struck unspecified targets in Kryvyi Rih, Dnipropetrovsk Oblast, and caused extensive flooding in areas of Kryvyi Rih.[6] Russian sources identified the target location as the Karachun Dam, which sits along the Inhulets River on the western outskirts of Kryvyi Rih.[7] Footage of the aftermath of the strike shows a 2.5m increase in the water level of the Inhulets River, which runs south of Kryvyi Rih and is an important geographical feature for the ongoing Ukrainian counteroffensive along the Kherson-Mykolaiv border.[8] Russian forces likely targeted the Karachun Dam to damage Ukrainian pontoon bridges further downstream, especially in light of recent reports that Ukrainian troops are attempting to expand their bridgehead over the Inhulets River near Davydiv Brid as part of the ongoing Kherson counteroffensive.[9] 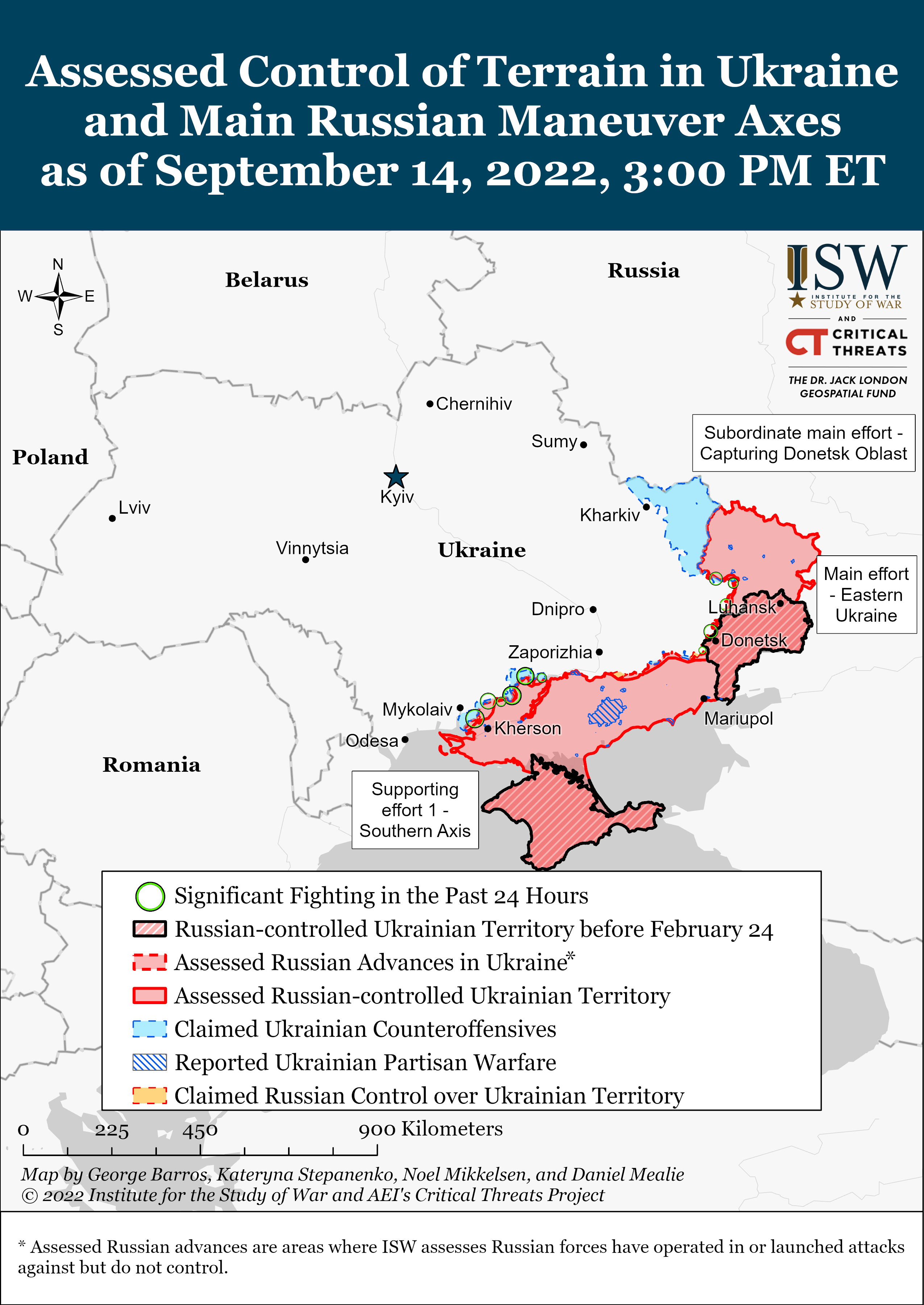 The Ukrainian counteroffensive in eastern Kharkiv Oblast continues to degrade Russian forces and threaten Russian artillery and air defenses. The Ukrainian General Staff reported on September 14 that the intensity of Russian artillery attacks on Kharkiv City has decreased significantly, suggesting that Ukraine's counteroffensive has degraded Russian forces’ ability to conduct routine artillery strikes on the center of Kharkiv City as Russian forces have been pushed eastward towards the Oskil River and north back into Russia.[10]  Ukrainian advances in eastern Ukraine have likely forced Russian forces to pull air defenses further away from the frontlines in order to protect those systems from Ukrainian artillery fire, potentially exposing frontline Russian troops to air attacks. The Ukrainian General Staff reported on September 14 that Russian convoys carrying S-300 and Buk systems moved through Lutuhine, Luhansk Oblast in the direction of the Russian border on September 11 and 12.[11]

Russian sources continued to discuss limited Ukrainian ground attacks in eastern Kharkiv, northern Donetsk, and western Luhansk Oblasts. Several Russian milbloggers claimed that Russian and proxy forces are defending against Ukrainian attacks on Lyman in northern Donetsk Oblast.[12] Russian sources also reported that fighting is ongoing in Bilohorivka (along the Donetsk-Luhansk Oblast border) and in nearby settlements around Siversk.[13] The Ukrainian General Staff noted that Russian troops attempted to attack in Spirne (12km south of Bilohorivka), likely in an attempt to push northwards and threaten Ukrainian forces in Bilohorivka.[14] 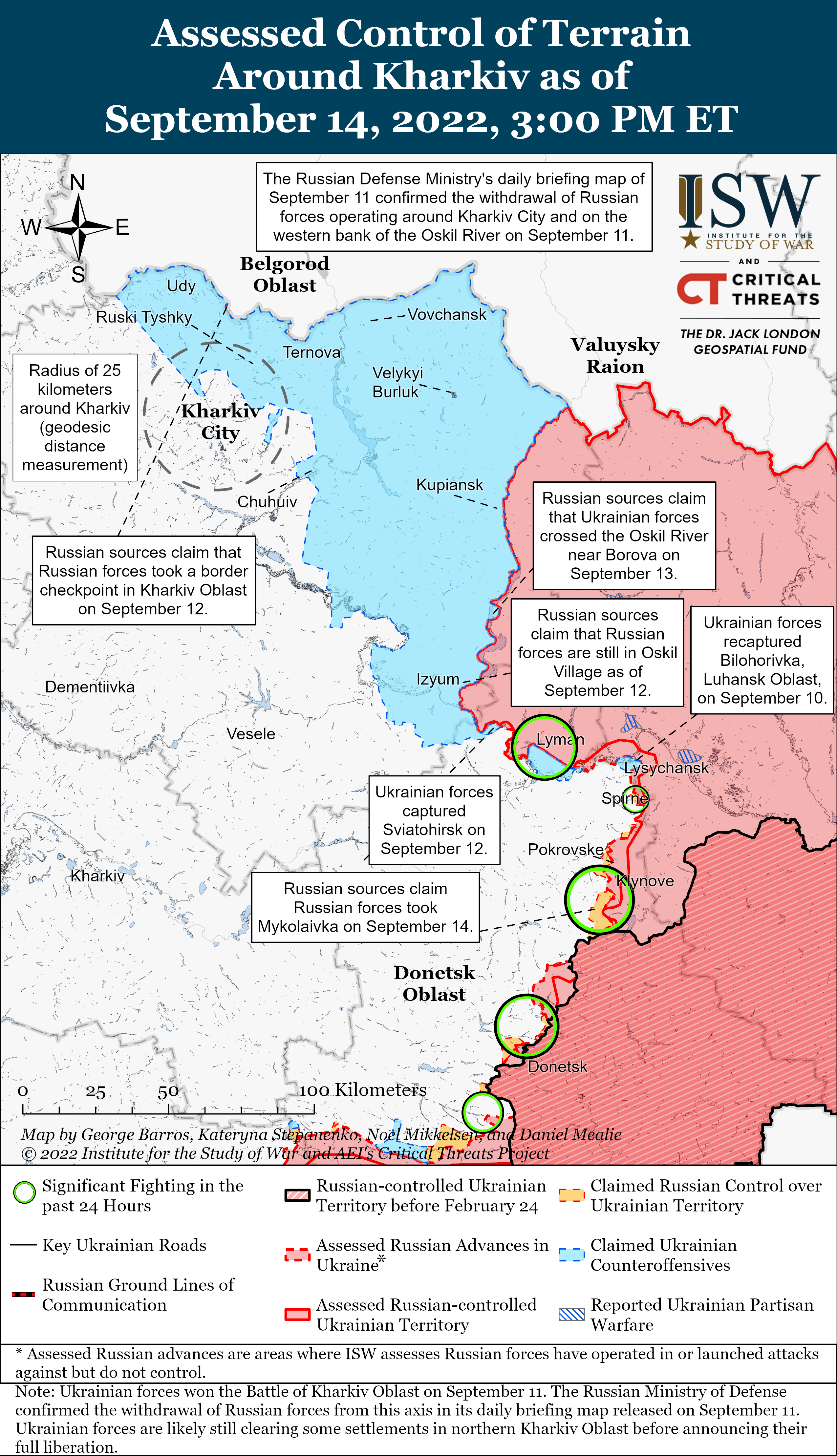 Ukrainian military sources maintained their operational silence on September 14. Kherson Oblast Council Head Oleksandr Samoilenko announced that Ukrainian forces have liberated Kyselivka, approximately 23km northwest of Kherson City, but Ukrainian military officials have not confirmed the liberation of the settlement at this time.[15] ISW has not seen any visual evidence supporting Samoilenko‘s statement, and Russian sources denied Ukrainian local reports of advances in the area.[16] The Ukrainian Southern Operational Command reported that Ukrainian strikes are continuously undermining Russian efforts to repair the Kakhovka Bridge over the Dnipro River and have rendered the Darivka pontoon bridge over the Inhulets River impassable.[17] Ukrainian forces have reportedly continued to target Russian crossings near the Antonivka area and are firing at Russian convoys.[18] Ukrainian forces maintained their interdiction campaign, reportedly targeting Russian manpower and equipment concentration points in Hola Prystan (approximately 12km southwest of Kherson City), Dudchany, and Mylove (both on the T0403 highway).[19]  The Southern Operational Command also stated that Ukrainian forces inflicted damage on four ammunition depots in Kherson Raion.[20] The Ukrainian General Staff also noted that Russian forces continued to house troops in residential areas, specifically in the Chaplynka Raion north of the Kherson Oblast-Crimea border.[21]

Social media footage and statements by Russian-appointed occupation officials are corroborating the ongoing Ukrainian interdiction campaign. Geolocated footage showed the aftermath of the Ukrainian strike on the School of Higher Sportsmanship, which reportedly served as an area of Russian troop concentration.[22] Geolocated footage also showed a Ukrainian volunteer air reconnaissance unit striking a Russian storage building in Velyka Oleksandrivka, on the T2207 highway.[23] Local residents also reported hearing the sound of explosions and six missile strikes near Kherson City.[24] The head of the Kherson Oblast occupation administration, Vladimir Saldo, stated that Ukrainian forces struck the Antonivsky Bridge, but noted that occupation authorities are continuing to use ferry crossings in the area.[25] The deputy head of the Kherson Oblast occupation regime, Kirill Stremousov, claimed that Ukrainian forces fired at a ferry transporting civilians across the Dnipro River near the Antonivsky Bridge.[26] Numerous geolocated videos show that Russian forces are using ferries to transport military equipment across the Dnipro River, and Stremousov did not provide evidence supporting his claims.[27]

The Russian MoD did not comment on the situation in Kherson Oblast on September 14, only claiming that Russian troops struck Ukrainian positions along the Kherson-Mykolaiv frontline.[34] 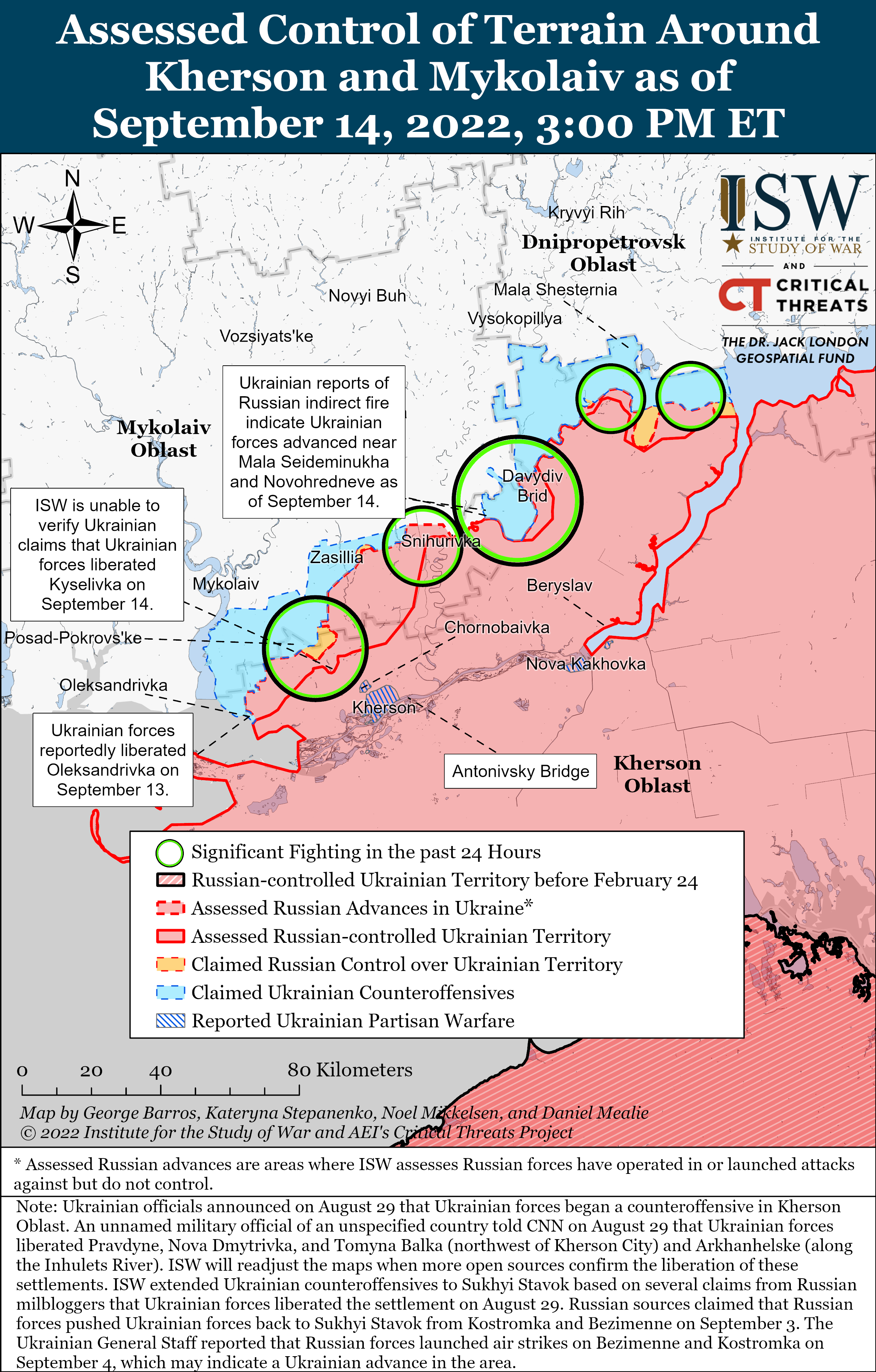 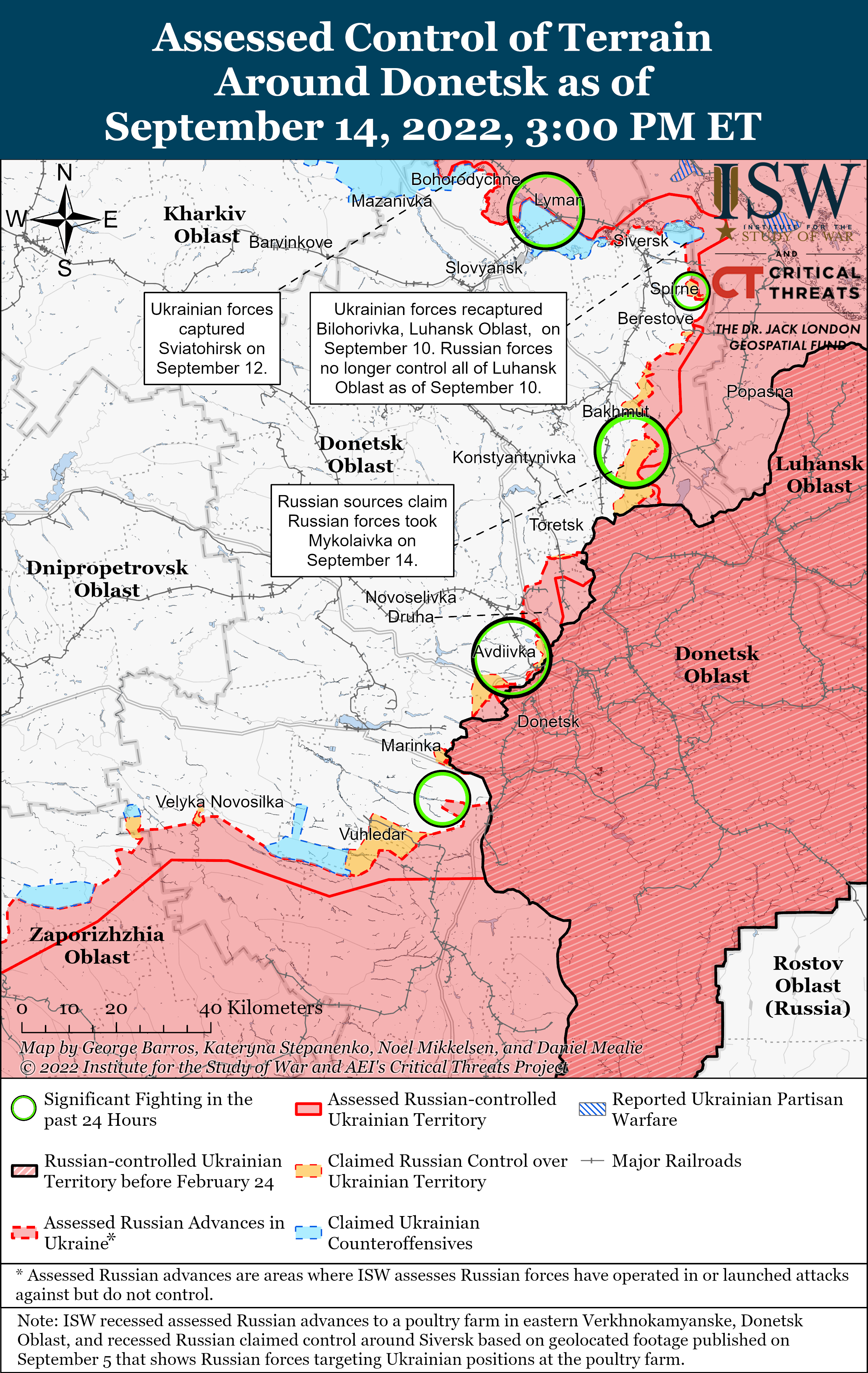 Russian forces did not conduct any confirmed ground attacks in western Zaporizhia Oblast on September 14 and continued to fire along the line of contact.[40] Russian milbloggers claimed that Ukrainian troops are amassing along the Zaporizhia Oblast frontline and that Ukrainian troops attempted a failed offensive from Orikhiv (about 50km southeast of Zaporizhzhia City) towards Nestryanka (10km southeast of Orikhiv).[41] Russian sources are seemingly concerned that Ukrainian troops may attempt to attack Vasylivka or push south on Russian-occupied Tokmak.[42] Russian forces also continued routine shelling throughout Mykolaiv and Dnipropetrovsk Oblasts.[43]

Funding volunteer battalions is likely placing financial strain on Russian cities and oblasts. An opposition member of the St Petersburg Legislative Assembly, Boris Vyshnevskiy, filed a motion on September 14 asking the city’s governor to explain which part of the city’s budget is providing funding for the city’s volunteer battalions.[46] The city government rejected his motion, likely suggesting either that the St Petersburg government does not have sufficient funding for the battalion, that funding for the battalion is coming from the Kremlin, or that the city is diverting funding from other programs in a way that would be embarrassing to admit publicly. The model of having localities pay for parts of the volunteer program was likely a Kremlin attempt both to obfuscate and to disperse the cost of the program.

Russian military leadership is likely attempting to force Luhansk People’s Republic (LNR) proxy forces evacuated from Kharkiv Oblast to relocate to frontlines in Donetsk Oblast, rather than reinforcing the new frontlines in Luhansk, their home province. Odesa military spokesperson Sergey Bratchuk reshared a Telegram post alleging that women in Luhansk attempted to protest the LNR forces’ immediate redeployment and shared a video of many uniformed personnel and civilians on the streets in an unspecified location.[47] Forcing proxy forces to fight outside of their claimed oblasts will likely exacerbate morale issues and possible insubordination among proxy forces particularly if Ukrainian forces advance further into Luhansk Oblast.