Russian Defense Minister Sergei Shoigu’s declarations about which categories of Russian males will be exempted from partial mobilization may not reflect Russian President Vladimir Putin’s intentions or orders. A Russian media insider claimed on September 24 that officials of the Russian Ministry of Defense (MoD) reprimanded military commissars in person for negligence in carrying out mobilization and sending out summonses in “excess,” and contrary to the explicit MoD guidance regarding exemptions for age, disability, or other limiting factors.[1]  Another Russian source claimed that certain heads of federal subjects acknowledged that they have mobilized citizens who are technically ineligible.[2]

The military commissars are generally acting as if they had received orders to prioritize getting bodies to training centers over adhering to Shoigu’s guidelines, and the seemingly confused chains of responsibility for executing the mobilization decree may be responsible for the divergence between Shoigu’s statements and commissars’ actions. Shoigu emphatically reiterated on September 21 that mobilization is partial and will only rely on those already in the reserve and with combat experience and military experience, but military commissars failed to adhere to Shoigu’s guidance, practically from the onset of the mobilization order.[5] Continued reports of military commissars conducting chaotic distribution of mobilization summonses indicate that they feel significant pressure to carry out mobilization as quickly as possible. Ukrainian sources reported that Russian authorities are immediately mobilizing individuals in occupied areas of Ukraine after “rewarding” them with Russian passports for participating in sham referenda rather than waiting until annexation makes the mobilization of eligible males in Russian-occupied areas legal under Russian law.  This haste suggests that military commissars feel pressure to expedite mobilization which is not reflected in Shoigu’s statements.[6] The MoD is evidently not in full control of mobilization, raising questions about which Russian males actually will be mobilized and how effective the mobilized force will be.[7]

Positions held by senior Russian military leadership are continuing to change hands, suggesting that Russian President Vladimir Putin is continuing to see systemic problems as the result of the personal failings of senior subordinates. The Russian MoD reported on September 24 that Colonel-General Mikhail Mizintsev has been appointed Deputy Defense Minister and will oversee logistics for the Russian Armed Forces, replacing Army General Dmitry Bulgakov.[8] Mizintsev previously acted as head of the Russian National Defense Control Center and served during Russian operations in Syria, notably commanding troops on the operational-tactical level during the encirclement of Ukrainian forces in Mariupol.[9] The replacement of individual senior leaders is very unlikely to fix fundamental structural problems in the Russian military. It reflects Putin’s personality-driven approach to leadership and relative disdain for system-building—both factors that contributed to the overall failures of the Russian military in this war.

Russian forces may be preparing to forcibly mobilize Ukrainian prisoners of war (POWs) to fight for Russia, which would constitute a violation of the Geneva Convention on Prisoners of War.  Russian state media reported on September 24 that Ukrainian POWs detained at the Olenivka prison camp orally “requested” Donetsk People’s Republic (DNR) authorities to allow them to fight in the DNR’s volunteer “Bohdan Khmelnitsky” Cossack Battalion. [10] If Russian or Russian proxy forces coerced Ukrainian POWs into combat, it would be a violation of the Geneva Convention on Prisoners of War, which stipulates that “no prisoner of war may at any time be sent to or detained in areas where he may be exposed to the fire of the combat zone” and shall not “be employed on labour which is of an unhealthy or dangerous nature.”[11] 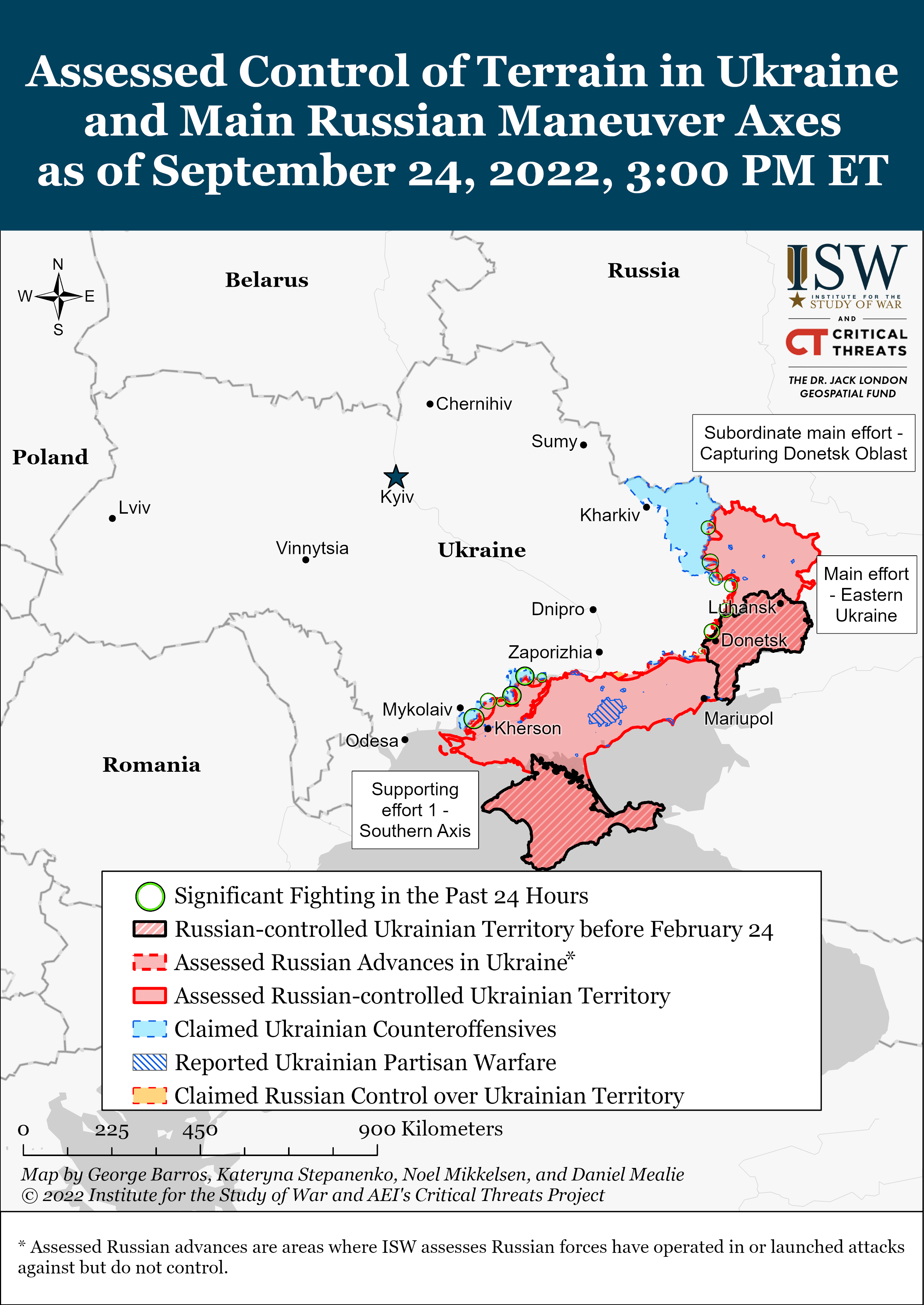 Voice of America reported that recent rainfall has slowed Ukrainian attempts to advance further east of positions along the Oskil River because muddy cross-country terrain makes it difficult to effectively transport heavy weapons and equipment.[16] The recent weather patterns in northeastern Kharkiv Oblast may explain why recent Ukrainian advances near the Kharkiv-Luhansk Oblast border have largely been along existing roadways to the east, which allows Ukrainian troops to threaten Russian positions without having to risk traversing muddy terrain under Russian artillery fire. To the extent that Ukrainian advances are confined to roadways, however, the limited effective Russian forces in the area are more able to concentrate to slow their advances. The fact that Ukrainian forces continue to make gains nevertheless suggests that Russian troops on this axis are weak and vulnerable.

Ukrainian troops also likely continued offensive operations around Lyman on September 24. A Russian source claimed that Ukrainian troops took control of Nove (18km due north of Lyman) and are continuing to push south of Lyman from the Ridkodub-Nove line.[17] Several Russian milbloggers claimed that Ukrainian troops also took control of half of Novoselivka, 10km northwest of Lyman.[18] Russian forces identified the Russian defenders of Lyman to BARS-13 and BARS-16 detachments (the latter of which is known as the “Kuban” detachment), which are sub-battalion formations comprised of Russian reservists from the Russian Special Combat Army Reserve.[19] 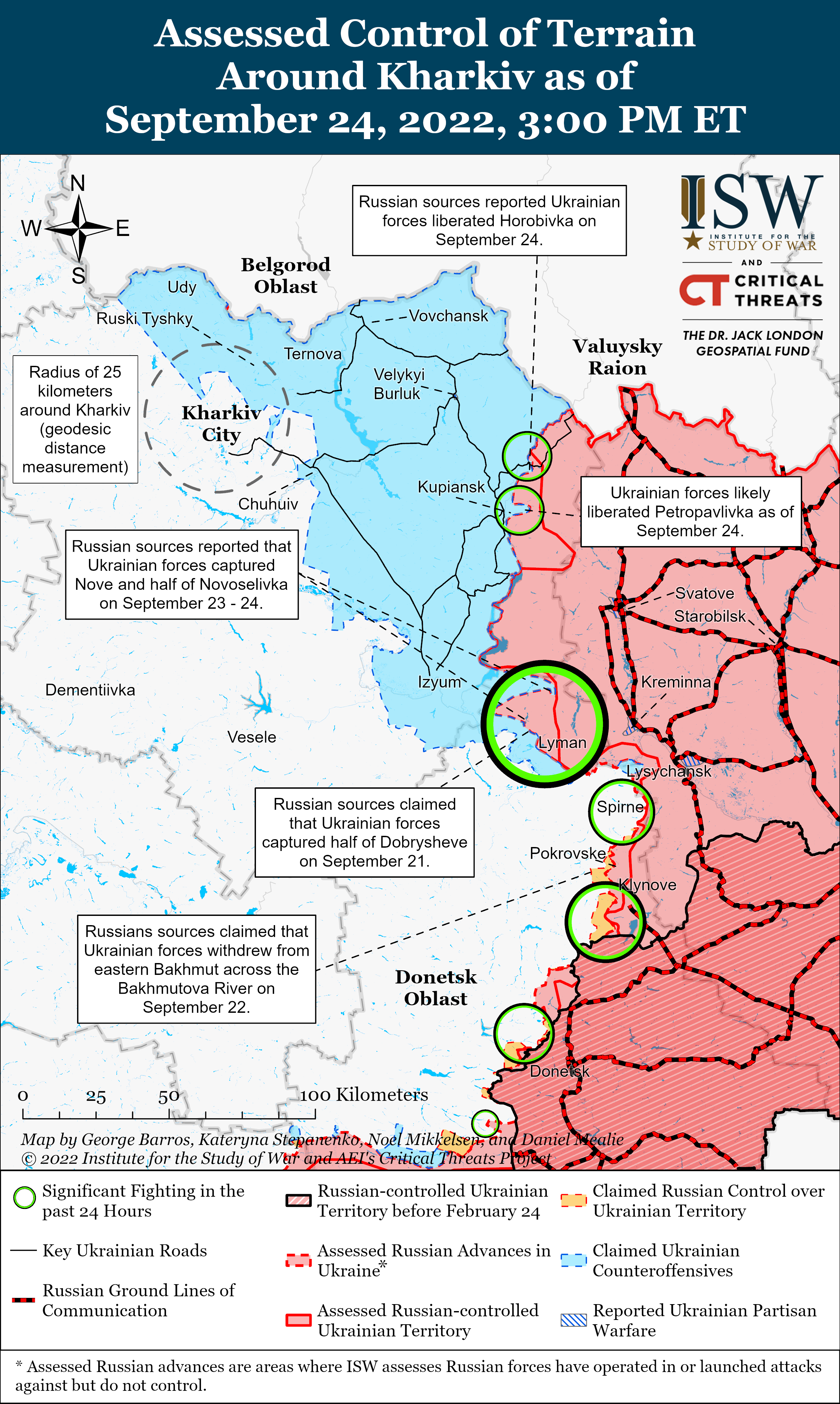 Ukrainian military officials maintained operational silence regarding Ukrainian ground maneuvers in Kherson Oblast on September 24 but reiterated that the current Ukrainian interdiction campaign in southern Ukraine is continuing to have tangible impacts on Russian capabilities on this axis. Ukraine’s Southern Operational Command noted that Russian units are attempting to rotate units and conduct limited ground maneuvers in unspecified areas and are setting up new defensive lines that are further removed from the current frontline.[20] These statements suggest that Russian forces are trying to restore and preserve current combat capabilities by rotating likely exhausted units and moving further back into rear areas in the face of continued Ukrainian strikes on Russian concentration areas. Unit rotation suggests that the Russians will be unable to add additional forces to this axis since it implies removing exhausted units likely on a one-for-one basis with relatively fresher units.

Social media footage provides visual evidence that corroborates both Ukrainian and Russian claims of strikes comprising the continued Ukrainian interdiction campaign in Kherson Oblast. Residents of Nova Kakhovka (60km east of Kherson City) reported explosions on September 23 to 24, which corroborates Russian and Ukrainian claims that Ukrainian strikes hit Nova Kakhovka and the nearby Kakhovka Hydroelectric Power Plant and Bersylav district.[21] Footage from Kherson City shows damage to the Antonivskyi Bridge following consistent Ukrainian strikes on the bridge and other Russian transportation assets and concentration areas in the Kherson City area.[22] A Russian source claimed that Ukrainian forces struck Russian positions south of the Dnipro River in the Henichesk area (about 170km southeast of Kherson City and 40 km north of Crimea), which is consistent with a statement made by Ukraine’s Southern Operational Command that Ukrainian forces hit a Russian control point near Henichesk.[23] 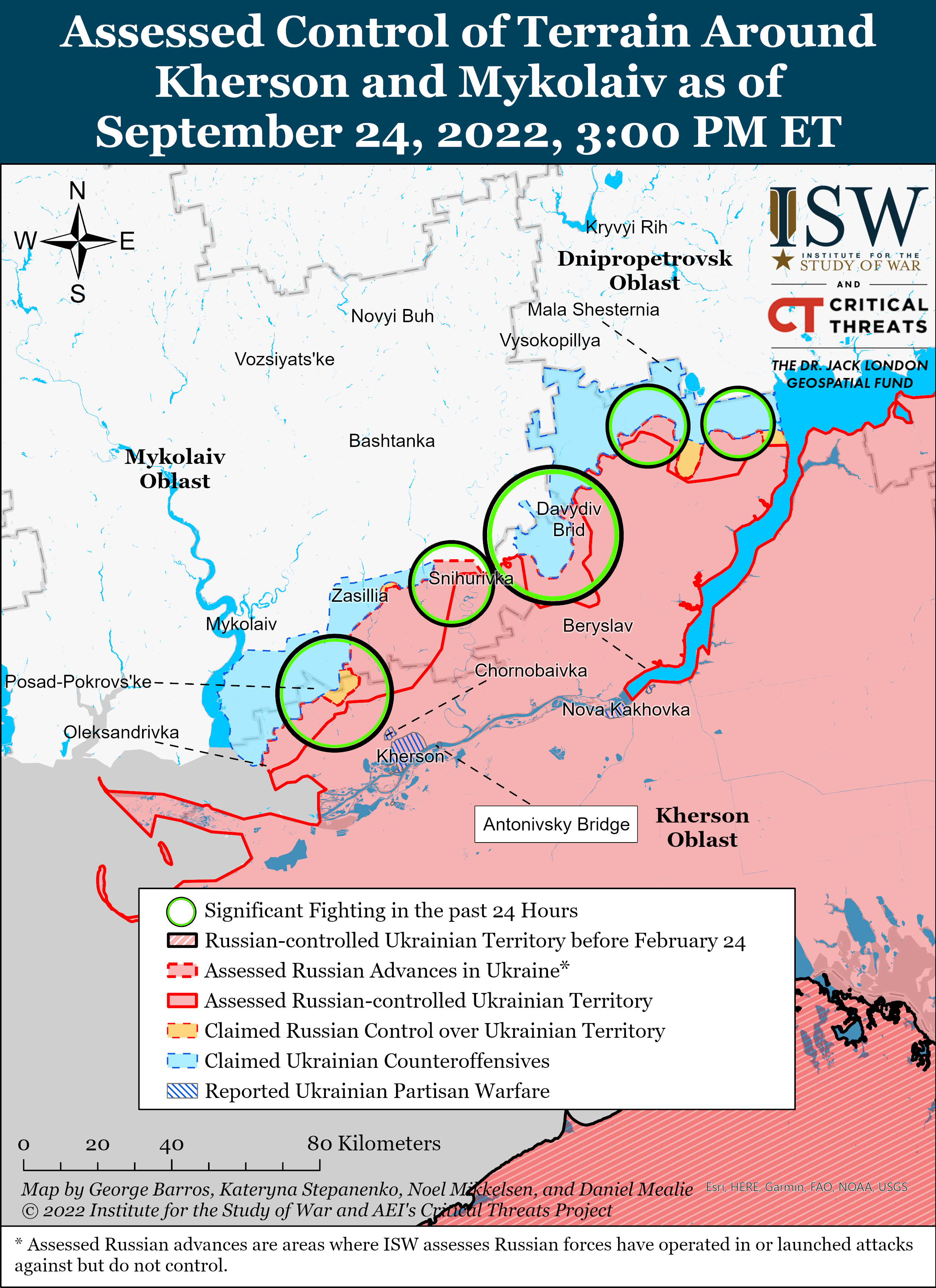 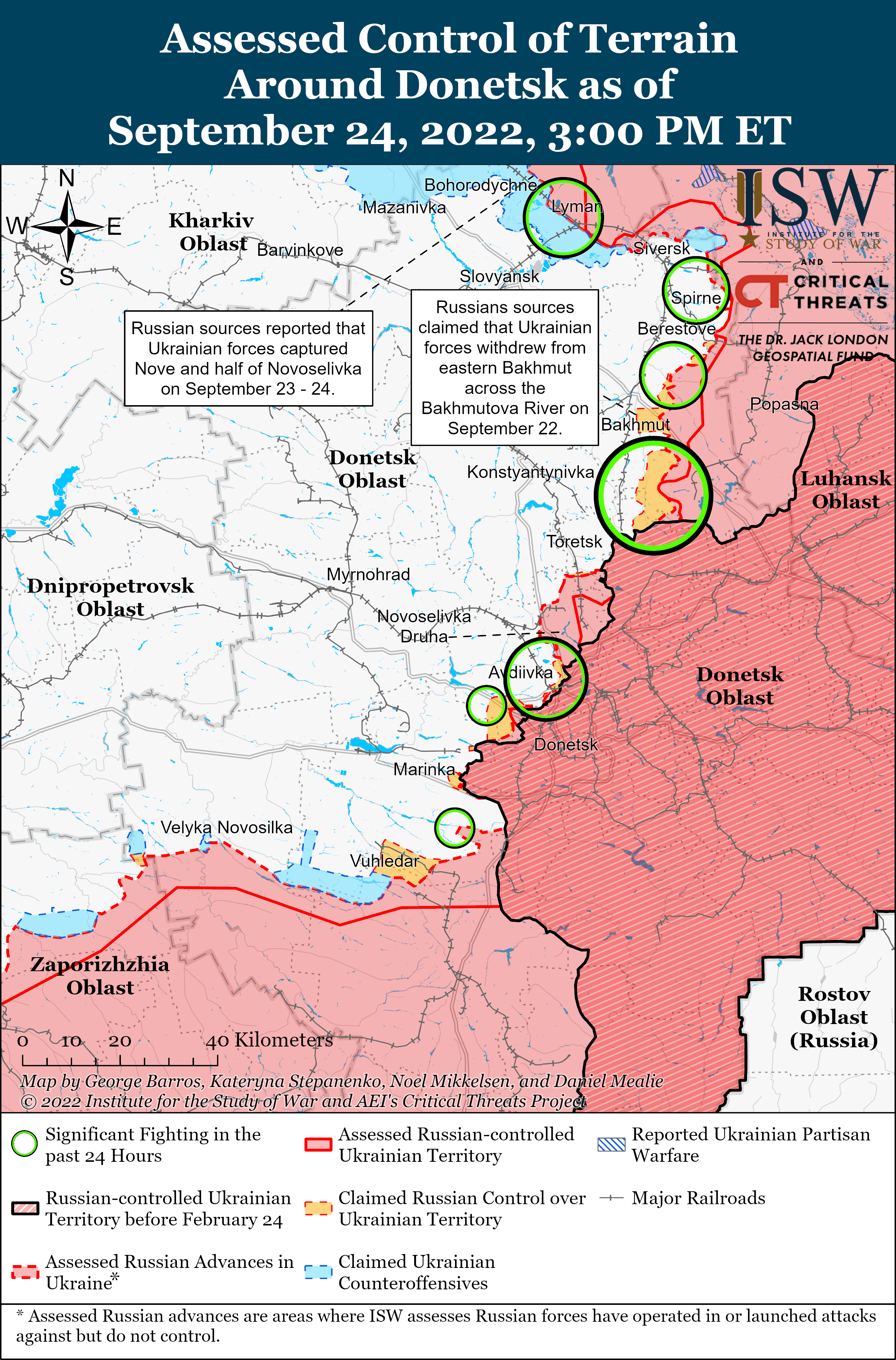 Russian forces did not conduct any confirmed ground attacks west of Hulyaipole on September 24 and continued routine strikes in Zaporizhia, Mykolaiv, and Dnipropetrovsk Oblasts.[34] Ukrainian sources reported that Russian troops launched Kh-31 missiles at port infrastructure in Ochakiv, Mykolaiv Oblast, and continued rocket strikes on Zaporizhzhia City and Mykolaiv City.[35] Ukraine’s Southern Operational Command stated that Russian forces shelled the coast of the Kakhovske Reservoir near Chervonohryhorivka, Dnipropetrovsk Oblast (just across the water from Enerhodar).[36] This strike is a likely continuation of a recent Russian campaign to target Ukrainian hydrotechnical assets, which the UK Ministry of Defense assessed is unlikely to significantly impact Ukrainian operations due to the distance between these hydrotechnical assets and frontline combat zones.[37] Geolocated social media footage confirmed the location of an Iranian Shahed-136 drone attack on Odesa on September 23.[38]

The Kremlin’s “partial mobilization” continues to hastily press thousands of men across Russia into military service but remains unlikely to generate effective combat power.[39] Russian sources state that some mobilized men will receive 1-2 months of training.[40] Others may receive even less. Mobilization has drafted men in their upper 50s with serious medical conditions to fight in Ukraine.[41] Social media videos posted on September 24 show mobilized personnel receiving badly maintained and rusted small arms unfit for service.[42] Social media videos of mobilized men show they have low morale and are undisciplined and unruly.[43] Russian civilians continued protests against military mobilization and conducted arson attacks against polling stations in Russia on September 24.[44]