Ukrainian successes on the Kharkiv City-Izyum line are creating fissures within the Russian information space and eroding confidence in Russian command to a degree not seen since a failed Russian river crossing in mid-May. Ukrainian military officials announced that Ukrainian forces advanced 50km deep into Russian defensive positions north of Izyum on September 8, but the Russian Ministry of Defense (MoD) notably did not issue any statement regarding Ukrainian advances in Kharkiv Oblast.[1] Ukrainian successes and the Russian MoD’s silence prompted many Russian milbloggers to criticize and debate Russian failures to retain control over the city of Balakliya, approximately 44km northwest of Izyum. Some milbloggers claimed that Russian forces fully or partially withdrew from Balakliya in good order, while others complained that Ukrainian forces beat Russian forces out of the settlement.[2] Others noted that Rosgvardia units operating in the area did not coordinate their defenses or have sufficient artillery capabilities to prevent Ukrainian counterattacks in the region.[3] Milbloggers warned about an impending Ukrainian counteroffensive northwest of Izyum for days prior to Ukrainian advances, and some milbloggers noted that Russian command failed to prepare for “obvious and predictable” Ukrainian counteroffensives.[4] Others noted that Ukrainian forces have “completely outplayed” the Russian military command in Balakliya, while others encouraged readers to wait to discuss Russian losses and withhold criticism until Russian forces stabilize the frontlines.[5]

The current tone and scale of Russian milblogger criticism echo the response to Russia’s loss of a large amount of armor in a failed Russian river crossing in Bilohorivka, Luhansk Oblast, in May.[6] ISW assessed at the time that the catastrophic Russian losses suffered due to incompetence shook the confidence of pro-Russian milbloggers, sparking criticism of the Russian war effort. Russian milbloggers and social media users accessed satellite imagery that showed devastating losses of Russian military equipment, which caused many to comment on the incompetence of the Russian military and analyze the scene on a tactical level. The Russian MoD did not comment on the situation, fueling burgeoning doubts about Russia’s prospects in Ukraine.

The Russian MoD repeated its Bilohorivka information mistake by failing to acknowledge the situation around Kharkiv Oblast and establish a desired narrative, leaving milbloggers to fill this gap with criticism of Russian forces. The Russian MoD only claimed to have destroyed a Ukrainian ammunition depot in Balakliya.[7] Some milbloggers complained that the Russian MoD did not seize the information space in a timely manner to prevent the spread of Ukrainian social media on Russian Telegram channels, leading to distrust among Russian audiences.[8] Milbloggers largely supported the Russian MoD’s narratives that the Ukrainian counteroffensive in Kherson Oblast had completely failed just days prior to Ukrainian breakthroughs in Kharkiv Oblast.[9] Such a shift in milblogger perceptions of Russian progress in Ukraine can be partially attributed to the flaws in the Russian war-time information strategy, namely that: 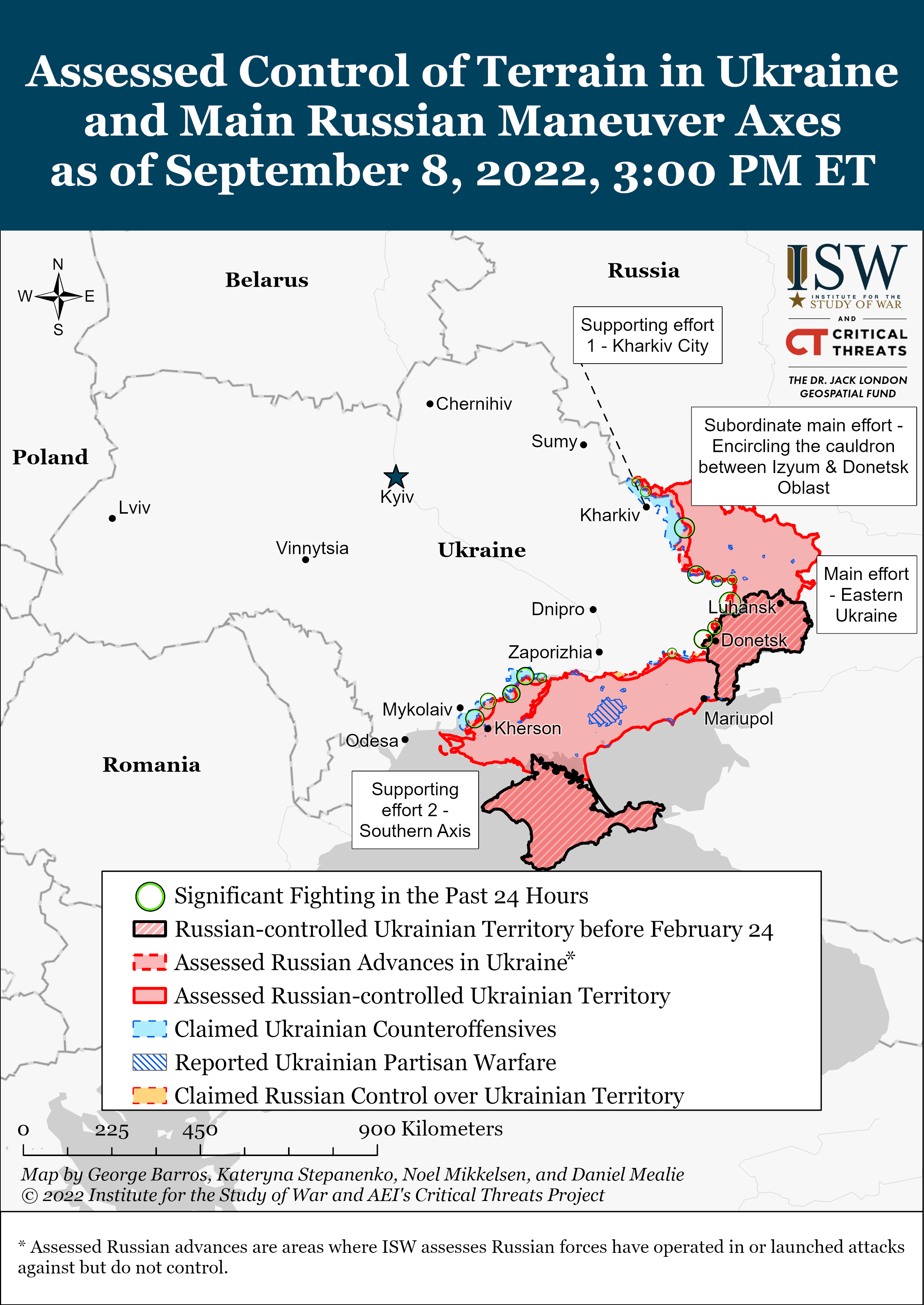 Social media provides additional visual evidence corroborating the ongoing successful Ukrainian interdiction campaign and Russian attempts to restore GLOCs to northern Kherson Oblast. Satellite imagery from September 7 suggests that one of the ferries operating near Antonivsky Road Bridge is out of service, likely following recent Ukrainian strikes on the GLOC.[16] However, geolocated footage published on September 7 shows that Russian forces opened a new ferry crossing over the Dnipro River in downtown Kherson City.[17] Residents reported hearing over 10 explosions in the area of the Darivka Bridge, and geolocated footage showed the aftermath of a Ukrainian strike on a Russian convoy on a pontoon crossing near Nova Kakhovka on September 7.[18] Russian and Ukrainian sources published footage of a destroyed residential building in Nova Kakhovka, and local Ukrainian reports stated that a Russian air defense missile fell onto the building.[19] Residents also reported explosions near a railway junction at Novooleksiivka (just north of the Kherson Oblast-Crimea border) after the arrival of a Russian train from Crimea, which supports Ukrainian military officials’ reports of continued partisan activities in southern Kherson Oblast targeting Russian logistics.[20] Local Telegram channels reported the activation of Russian air-defense systems and explosions in Nova Mayachka and Chaplynka in central and southern Kherson Oblast, respectively.[21]

Ukrainian and Russian sources reported kinetic activity northwest of Kherson City, near the Ukrainian bridgehead over the Inhulets River, and around Snihurivka (approximately 60km east of Mykolaiv City) on September 8. Geolocated footage depicts Ukrainian forces raiding Russian positions in Ternovi Pody, approximately 28km northwest of Kherson City on September 8.[22] Russian milbloggers also claimed that Ukrainians broke through the defenses of the 20th Guards Motor Rifle Division between Ternovi Pody and Blahodatne, about 7km due southwest of Ternovi Pody.[23] The Russian MoD stated that Russian forces struck Ukrainian positions in the vicinity of Blahodatne and Ternovi Pody, which may further support geolocated footage and milblogger reports about Ukrainian advances in the area.[24] The Russian MoD also claimed that Ukrainian forces abandoned their positions in Zeleny Hai and Novohryhorivka (on the Kherson-Mykolaiv Oblast administrative border) due to heavy casualties, and the Ukrainian General Staff reported that Russian forces continued to shell both settlements.[25] Russian milbloggers claimed that Ukrainian forces continued to undertake measures to expand the bridgehead over the Inhulets River and have liberated Schastlyve (approximately 13km southeast of the river).[26] A milblogger noted that Russian forces regained positions in eastern parts of Bilohorivka following an airstrike campaign against Ukrainian forces in the area days prior.[27] A Russian milblogger also stated that Ukrainian forces did not attempt counteroffensive operations in the Snihurivka direction but continued to use helicopters to strike Russian airborne troops’ positions in Blahodatne (approximately 40km east of Mykolaiv City).[28] Neither Ukrainian nor Russian sources reported changes in positions south of the Kherson-Dnipropetrovsk Oblast border.[29] 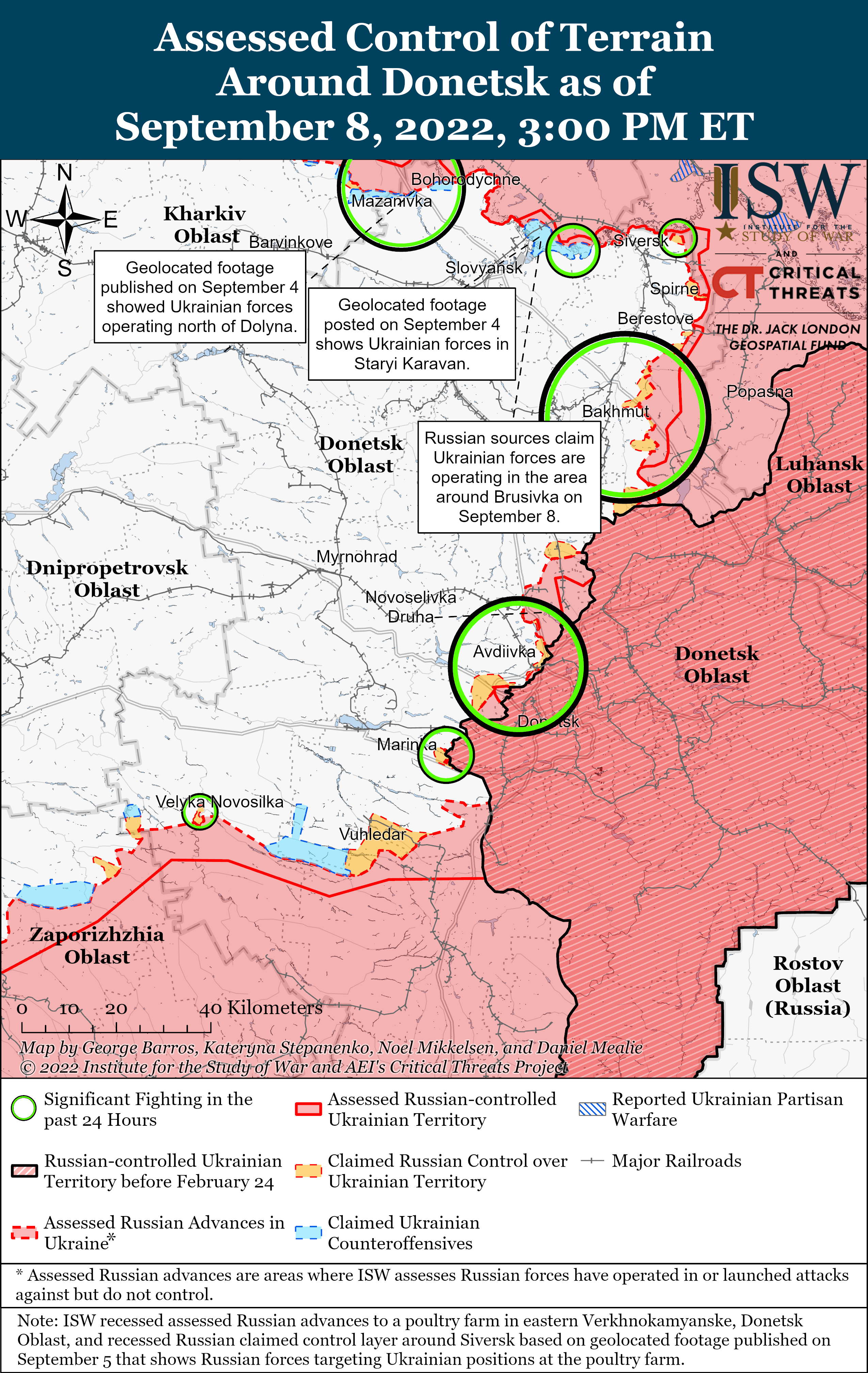 Russian forces conducted limited ground attacks south of Izyum and around Slovyansk on September 8. The Ukrainian General Staff reported that Ukrainian forces repelled Russian attacks near Dibrivne and Dovhenke, both approximately 25km south of Izyum.[32] The Ukrainian General Staff also reported that Ukrainian forces repelled Russian assaults in the area of the Sviati Hory National Nature Park (about 20km northeast of Slovyansk) and Bohorodychne (about 12km northwest of Slovyansk).[33] Russian forces also conducted routine artillery strikes along the Izyum-Slovyansk line and on areas north and northeast of Slovyansk.[34] 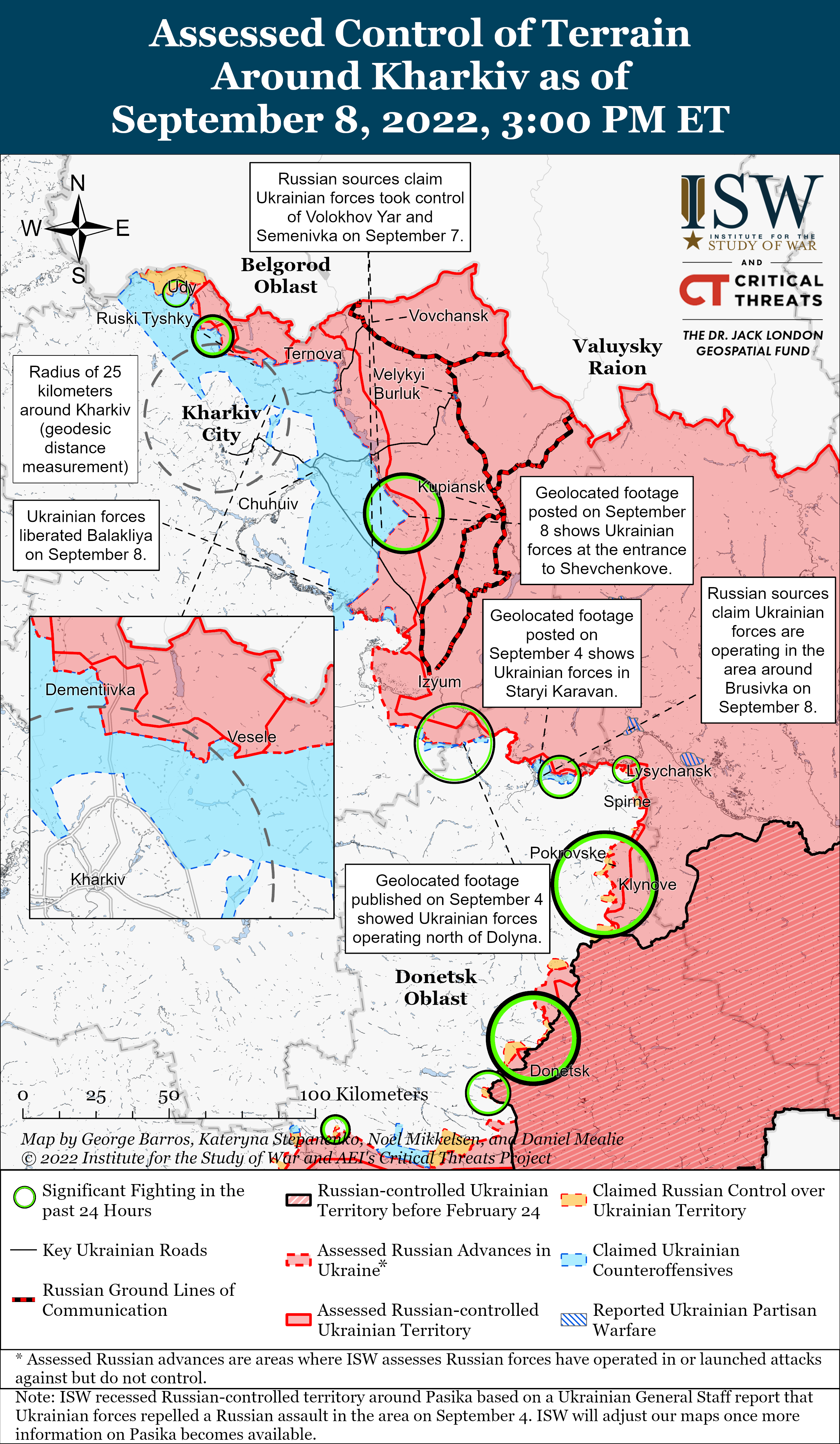 Ukrainian forces’ relatively quick speed of advance, proximity to Kupyansk, and ability to shell the city are prompting panic in Russian rear areas. Geolocated footage shows damage from a likely Ukrainian strike on a Russian military headquarters in occupied Kupyansk.[51] Kharkiv Oblast occupation administration head Vitaly Ganchev announced the evacuation of all women and children from Kupyansk City and Kupyansk Raion as well as Izyum Raion, citing increased Ukrainian artillery and rocket strikes but most likely due to the ongoing ground operations.[52] The Ukrainian General Staff reported that occupation authorities in Chuhuiv Raion, Kharkiv Oblast, are forcibly mobilizing men of conscription age by detaining them and sending them to Vovchansk, Kharkiv Oblast, likely to prevent these men from supporting advancing Ukrainian forces.[53]

Russian forces did not conduct offensive operations in western Zaporizhia Oblast and continued routine shelling along the frontline on September 8.[62] Geolocated footage showed an explosion at the Russian-occupied Vasylivka Bus Terminal near the Russian checkpoint to Ukrainian lines in Zaporizhia Oblast.[63] Russian sources accused the Ukrainian government of conducting two drone attacks on the bus terminal and targeting residents who have returned to the Russian-occupied Zaporizhia Oblast.[64] Russian forces have previously undertaken measures to restrict passage via the Vasylivka checkpoint and may be attempting to scare evacuees from leaving occupied territories by striking the checkpoint.[65] ISW cannot independently verify the party responsible for the strike, however. Russian sources also published footage of Russian forces reportedly attempting to shoot down a Ukrainian drone in Berdyansk on September 7.[66] Social media footage showed a plume of smoke in Tokmak (a strategic Russian logistics hub north of Melitopol), but the cause of the smoke is unclear.[67] 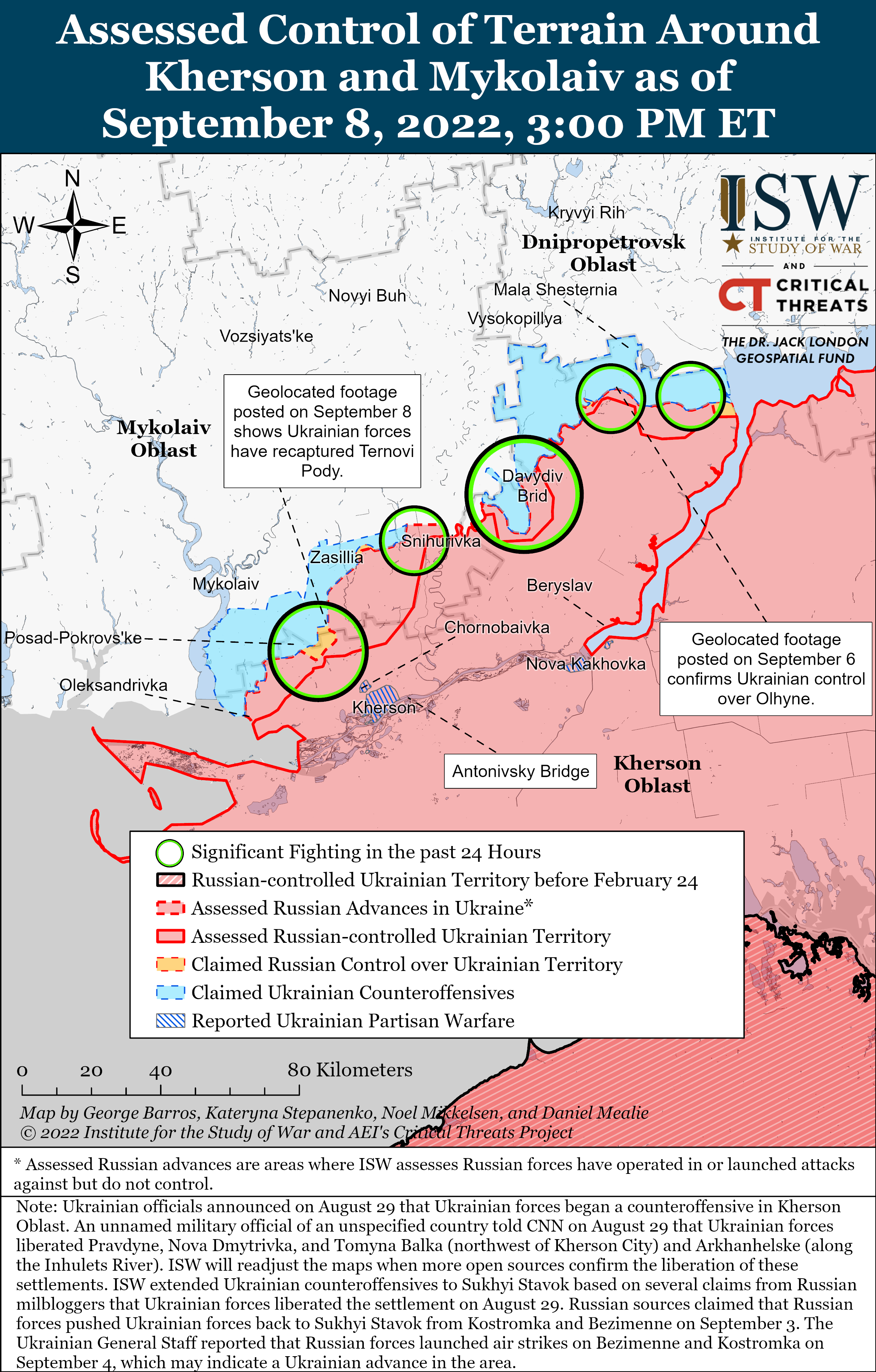 Russian military authorities continued forming and deploying volunteer units to Ukraine to compensate for personnel losses in Ukraine. Russian sources claimed that the sixth detachment of the Cossack volunteers deployed to Donbas on September 8, after training in Orenburg Oblast from August 31 to September 2.[75] The video of the deploying detachment only shows 10 volunteers that will rotate in for elements of the “Yermak” Cossack volunteer battalion. ISW previously identified that the “Yermak” battalion operated in the Kharkiv Oblast direction.[76] Chechen Republic leader Ramzan Kadyrov announced that four Chechen Rosgvardia special units—the “Sever” Regiment, “Yug” Battalion, “Akhmat-Grozny” OMON special police unit, and a police regiment for the protection of oil and gas facilities—are deploying to Ukraine.[77] Kadyrov announced the formation of the second police regiment for the protection of oil and gas facilities on August 20, claiming that the unit would defend critical infrastructure in Chechnya.[78] The deployment of the Rosgvardia units further supports ISW’s assessment that the Kremlin treats all Russian security forces as combat forces for the Russian “special military operation” in Ukraine.[79]

Russian authorities are continuing to struggle to recruit military personnel within occupied territories. The Ukrainian Main Military Intelligence Directorate (GUR) reported that Russian forces are signing up mobilized personnel within the Donetsk People’s Republic’s (DNR) 1st Army Corps for contract service without their consent to serve on the frontlines in Kherson Oblast.[80] The GUR does not specify if the mobilized personnel of the 1st Army Corps are signed up for contract service with the Russian MoD or with the DNR Militia. DNR advertisements for contract service within DNR volunteer units previously offered financial awards from both the DNR and Russia, which may imply that some formations may be generating contract soldiers who signed contracts with the Russian military.[81] The GUR added that elements of the 1st Army Corps are unaware of Ukrainian strikes on Russian GLOCs and ammunition depots in Kherson Oblast because Russian commanders are not informing lower command echelons of the situation on the ground.[82]