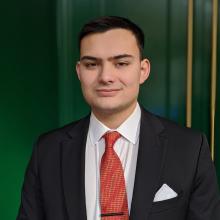 George Barros is the Geospatial Intelligence Team Lead and an analyst on the Russia and Ukraine portfolio at the Institute for the Study of War. His work within the Geospatial Intelligence Team focuses on innovating ISW's open source research methodology with remote sensing data collection, data visualization, and geospatial analysis. His work within the Russia and Ukraine portfolio focuses on Russian information operations, the Kremlin’s campaigns in Ukraine and Belarus, and Ukrainian politics. George received his B.A. with Honors in International Relations and Global Studies with a concentration in Russian and Post-Soviet Studies from the College of William & Mary. Prior to joining ISW, he worked in the U.S. House of Representatives as an advisor on Ukraine and Russia for a member of the Foreign Affairs Committee.

His work and interviews have been featured in media outlets including The Hill, the Washington Post, BBC, Associated Press, Reuters, Voice of America, Radio Free Europe Radio Liberty, Kyiv Post, the Kyiv Independent, and others.

George's maps of the 2022 Russian invasion of Ukraine have been republished by Reuters, the Financial Times, the BBC, The Guardian, The New York Times, The Washington Post, and others.
Select Publications:
Interactive Map: Russia's Invasion of Ukraine
ISW's Ukraine War Coverage (George is bylined on many of these publications and managed map production in nearly nearly all of them.)
Belarus Warning Update: Russia May Send "Little Green Men" To Belarus
George is on Twitter @georgewbarros.