The Assad Regime: From Counterinsurgency To Civil War 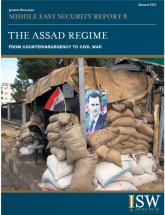 The conflict in Syria transitioned from an insurgency to a civil war during the summer of 2012. For the first year of the conflict, Bashar al-Assad relied on his father’s counterinsurgency approach; however, Bashar al-Assad’s campaign failed to put down the 2011 revolution and accelerated the descent into civil war. This report seeks to explain how the Assad regime lost its counterinsurgency campaign, but remains well situated to fight a protracted civil war against Syria’s opposition.

Hafez al-Assad subdued the Muslim Brotherhood uprising in the early 1980s through a counterinsurgency campaign that relied on three strategies for generating and employing military force: carefully selecting and deploying the most trusted military units, raising pro-regime militias, and using those forces to clear insurgents out of major urban areas and then hold them with a heavy garrison of troops. Bashar al-Assad attempted unsuccessfully to employ the same strategy in 2011-2012.

Bashar al-Assad’s reliance on a small core of trusted military units limited his ability to control all of Syria. He hedged against defections by deploying only the most loyal one-third of the Syrian Army, but in so doing he undercut his ability to prosecute a troop-intensive counterinsurgency campaign because he could not use all of his forces. Defections and attrition have exacerbated the regime’s central challenge of generating combat power. These dynamics have weakened the Syrian Army in some ways but also honed it, such that what remains of these armed forces is comprised entirely of committed regime supporters.

Pro-Assad militias have become the most significant source of armed reinforcement for the Syrian Army. The mostly-Alawite shabiha mafias are led by extended members of the Assad family and have been responsible for some of the worst brutality against the Syrian opposition. The local Popular Committees draw their ranks from minorities who have armed themselves to protect their communities against opposition fighters. Both types of militia coordinate closely with and receive direct support from the regime, as well as from Iran’s Islamic Revolutionary Guards (IRGC) and Lebanese Hezbollah.

Bashar al-Assad’s forces have displaced populations in opposition strongholds, which has deepened Syria’s sectarian division. The regime has employed artillery, air power, bulldozers, sectarian massacres, and even ballistic missiles to force Syrian populations out of insurgent held areas. This strategy ensures that even when the rebels win towns and neighborhoods, they lose the population. Chemical weapons are now the only unused element in Assad’s arsenal, which could be used for large-scale population displacement to great effect.

Fears of retribution have pushed conventional and paramilitary loyalists to converge upon the common goal of survival, resulting in a broadly cohesive, ultra-nationalist, and mostly-Alawite force. The remnants of the Syrian military and the powerful pro-regime militias are likely to wage a fierce insurgency against any opposition-led Sunni government in Syria if the Assad regime collapses. Iran and Lebanese Hezbollah are likely to encourage the militias and regime remnants to converge, supporting this transition to insurgency in order to preserve Iranian interests after Assad.

The regime has concentrated conventional forces in Damascus and Homs. The relatively small force deployed to northern and eastern Syria have disrupted rebel advances, but isolated strongpoints have been overrun as the regime struggles to maintain logistical lines of communication. The majority of the regime’s deployable forces have remained in Homs and Damascus, where rebels have made significant gains but remain unable to dislodge regime troops.

Assad is unlikely to regain control over all of Syria, although he is well situated to continue fighting in 2013 and to prevent the opposition from taking over the rest of the country. The regime has contracted around a corridor that connects Damascus, Homs, and the coast, and Assad can continue to rely on a broadly cohesive and mostly Alawite core of soldiers and militias, backed by Iran and Lebanese Hezbollah.

Download The Assad Regime: From Counterinsurgency To Civil War