Protesters in Zahedan, Sistan and Baluchistan Province rhetorically defended prominent Sunni cleric Moulana Abdol Hamid against the regime on December 1, underscoring the dilemma the regime faces in its protest crackdown. Protesters gathered and erected a large poster of Abdol Hamid in a city square.[1] The poster read that Abdol Hamid is the protesters’ “red line,” implying that they will not tolerate the regime arresting him or suppressing his message. The protesters may be responding to the purported internal regime memo that the Black Reward hacker group released on November 30.[2] The memo reported that Supreme Leader Ali Khamenei tried to discredit and threatened to arrest Abdol Hamid for his role in inspiring protests, although CTP cannot verify these claims. Abdol Hamid’s message is seemingly resonating with a growing number of Iranians, especially in the Iranian Sunni community. Any regime action to silence him risks inflaming protests and anti-regime frustrations further. The regime may target individuals close to Abdol Hamid as a less escalatory step to silence him.  The protestors today posed an additional dilemma for the regime, however, since failure to act against Abdol Hamid after the erection of the poster could make it appear that the regime was daunted by the protester threats and thus encourage similar defiance and threats elsewhere.

The Raisi administration may be trying to remove local officials who opposed the brutality of the regime crackdown. IRGC-affiliated Fars News Agency reported on October 19 that two percent of arrested protesters were government employees.[7]

At least five protests took place in four cities across four provinces on December 1. CTP assesses with moderate to high confidence that protests occurred in the following locations:

CTP assesses with low confidence that protests occurred in the following locations on December 1: 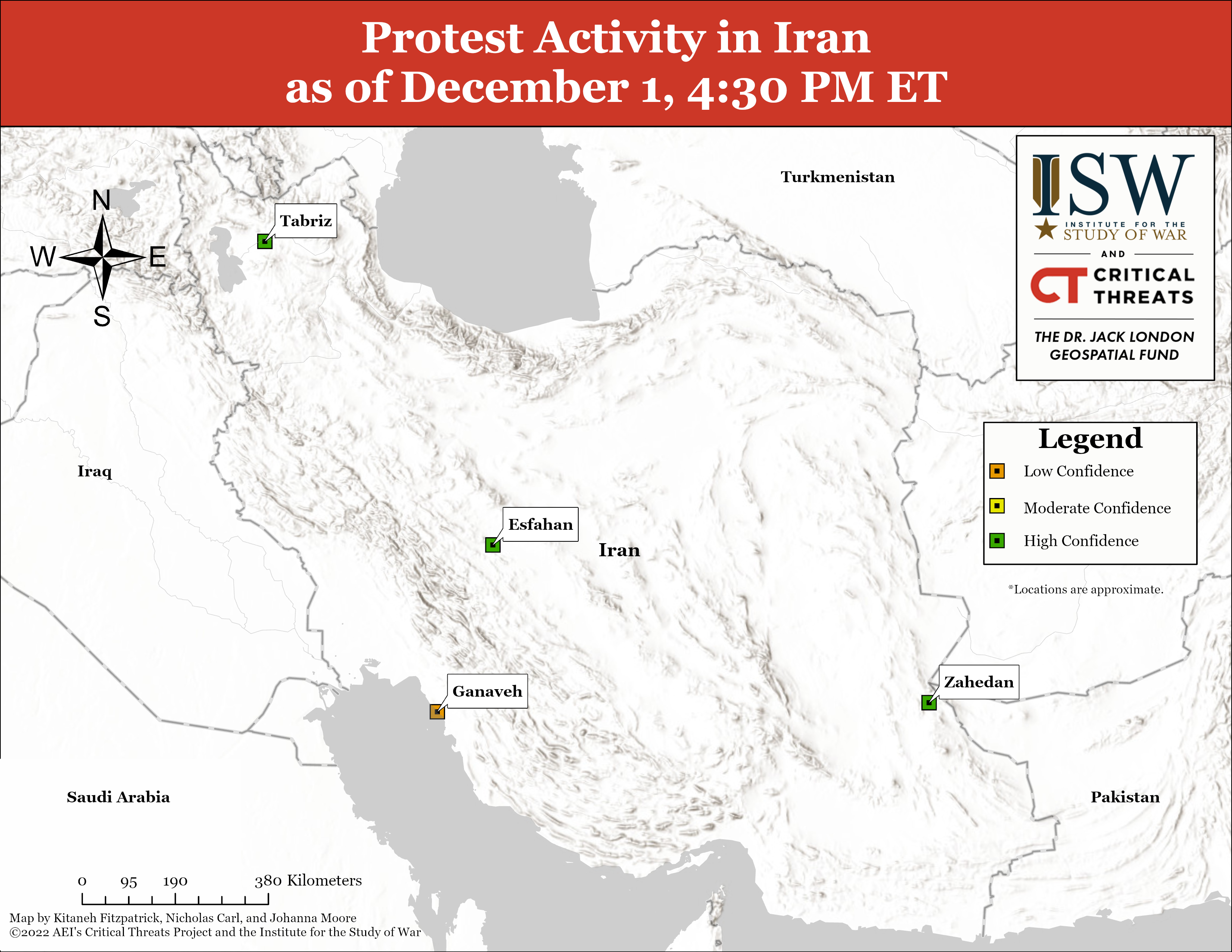 Neighborhood youth groups disseminated instructions on how to prevent state security services from collecting intelligence on protesters in preparation for the planned protests on December 5-7. The Karaj group advised protesters to clear their cellphones and electronic devices of information related to the protests and relevant contacts, place their cellphones on airplane mode, and password-protect their Instagram accounts.[13] The Mashhad Neighborhood Youth called on its “operational teams” to destroy CCTV cameras to prevent the state security services from using them to identify protesters.[14] The Mashhad Neighborhood Youth has repeatedly issued guidance and instructions to these operational teams since November 2022, implying some level of organization within this particular group.[15]

President Ebrahim Raisi traveled to Sanandaj, Kurdistan Province and met with local religious leaders, among others, on December 1.[16] His visit suggests that Raisi and his administration concluded that the unrest in Sanandaj had subsided enough to allow a safe trip. Raisi’s travel is his first to Kurdistan Province since protests began on September 16.